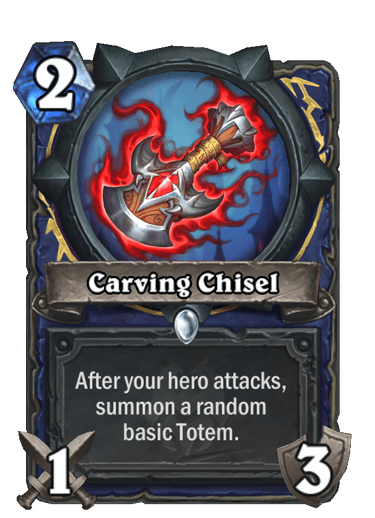 This weapon summons three totems in one hand, which is pretty good if you care about spamming totems. The weapon itself has weak stats and isn’t too impactful when it comes to dealing with opposing minions. If you’re running a Totem Shaman deck with Gigantotem, then this card is important but we’re not sure the synergies are there quite yet. There’s also a chance you play Chisel in any sort of aggressive Bloodlust deck, but it is a bit slow. 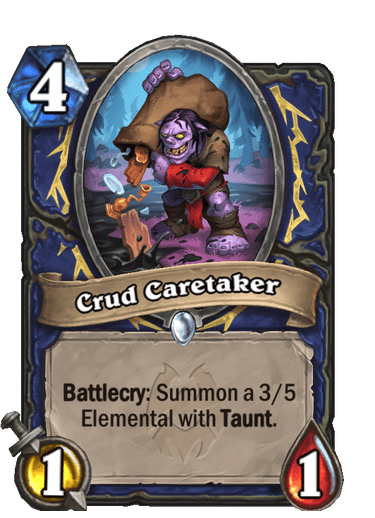 Sen’jin with a 1/1. Shaman has solid synergies with this card. The obvious one is Muck Pools. Random 5-drop and a Sen’jin on turn 4 is a strong play. This card is arguably stronger than its counterpart legendary from this set when it comes to Evolve synergies.

The other application is Bolner/Brann, since it’s a battlecry and getting multiple taunts to protect you can be a strong line of play. Should be one of the better cards in the new Evolve Shaman deck. 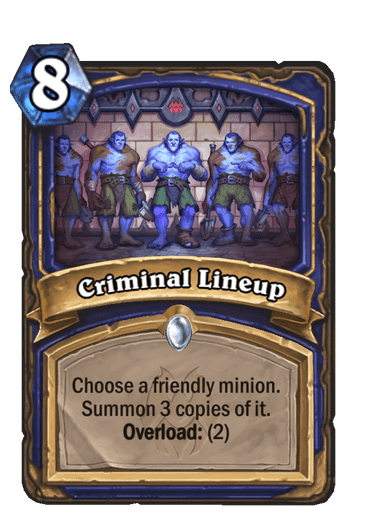 This card is weird and extremely expensive. If we’re expected to copy discounted Gigantotems with it, then we’re not too impressed. The cost is just extremely prohibitive, and Shaman used to have a similar spell that was stronger than this one in Sapphire Spellstone. It never saw play. We wouldn’t be surprised if Criminal Lineup met the same fate. 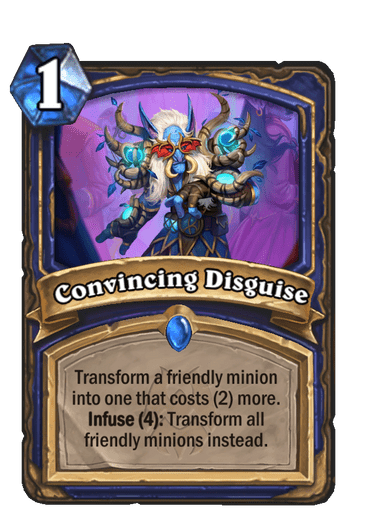 The new Evolve. This spell has a more powerful effect but requires you to infuse it in order activate its playable form (because a 1-mana Mutate isn’t it). The infuse requirement makes this card slower and likely worse than Evolve but it is still pretty intimidating with Tiny Toys and you should be able to infuse it by the time you want to make the turn 7 play.

If this is a bit worse than Evolve, then it is still very good. 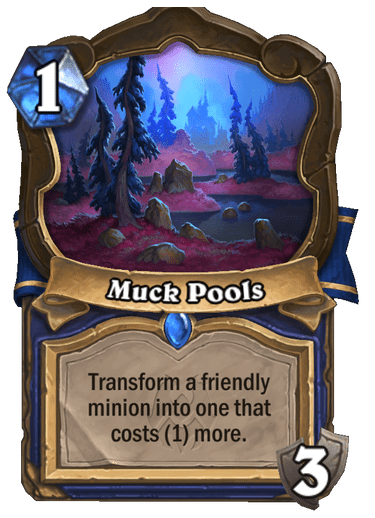 This is the glue of the Evolve Shaman deck, and likely going to be its best card. Three mutates in a single 1-mana card is great value. Not only is it essential to get the most of cards like Crud Caretaker, but it is also so generically powerful that it might just go into a Shaman deck that’s not dedicated to Evolve synergies.

The murloc package in Control Shaman offers good evolve targets like Gorloc Ravager and Clownfish. Goldshire Gnoll can be played thanks to Schooling to generate some early blow-out turns. You can just value trade and “heal” a minion with a Muck Pools charge. It’s just very versatile.

So, it’s either fantastic in one archetype, or ubiquitously strong. The floor for this card is high enough. 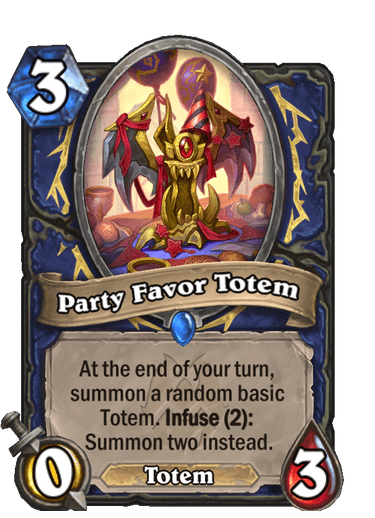 Weak at its baseline form, but we can often activate it on-curve, in which case this summons three totem bodies for 3 mana. This isn’t bad, but it’s not killing anyone unless you play “the one card”, which we’ll get to later. The problem with totems in the early game is that they get value traded. If you’re playing against a deck that develops minions early, then it’s impossible for the Shaman to stick a board. This only further polarizes the historical experience of the archetype and makes it less likely to be a consistently viable deck. 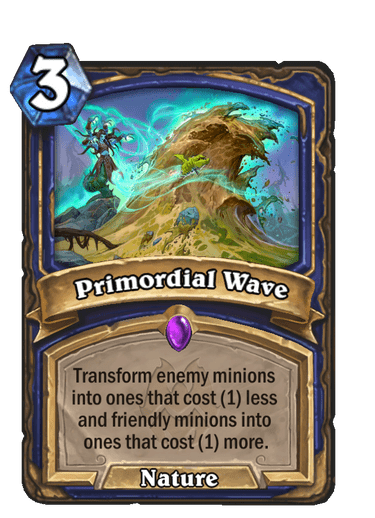 Evolve and Devolve rolled into one for no extra cost. Normally when you merge a card like this, it’s more powerful than the sum of its parts. But this isn’t the case here, because the effects carry diminishing returns and usually aren’t powerful when played together.

If you’re playing Tiny Toys or any cheap board flood, you always want the cheaper Evolve effect because you want to power spike as early as possible. If you’re ahead on board, then you might as well play a cheap evolve effect after value trading and get rid of the opponent’s threats completely. If you need to answer an opponent board and you’re behind, then the Evolve effect carries little to no value. If you do have a board and find yourself blocked by a taunt, you cannot Primordial Wave to transform the taunt and attack with your minions because they also get transformed.

This card is very awkward and inefficient, to an extent that we don’t even think Evolve Shaman will play it. 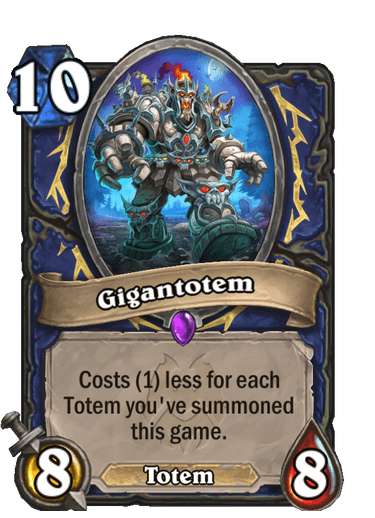 Giants should be given some respect. There are two cards that are worth three discount ticks in this set: Carving Chisel and Party Favor Totem. Amalgam of the Deep has a 50% chance of discovering a Gigantotem as well. It’s reasonable to suggest that Gigantotem can be fully discounted by around turn 7. The problem is, of course, that we’re spending mana on things that have little impact on the board. When we compare this to Naga Giant, Gigantotem seems inferior, as it’s far more restrictive on your plays and your deckbuilding.

This card is as good as totems are, and since they don’t seem that great right now, this doesn’t either. 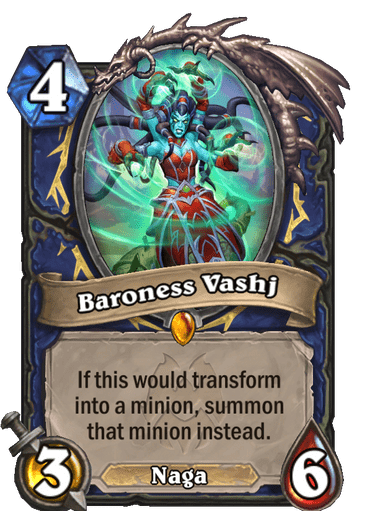 Good legendary for Evolve Shaman. Vashj with Muck Pools creates a random 5-drop on turn 4, which alongside with Vashj makes a comparable power play to Crud Caretaker. It’s a bit funny that Caretaker is arguably stronger on curve and might be the stronger card overall for the archetype, but Vashj is a recurring threat. The resistance to transformation effects from the opponent is something to consider but shouldn’t be too relevant.

Nothing fancy about it, you’ll likely play it in Evolve Shaman 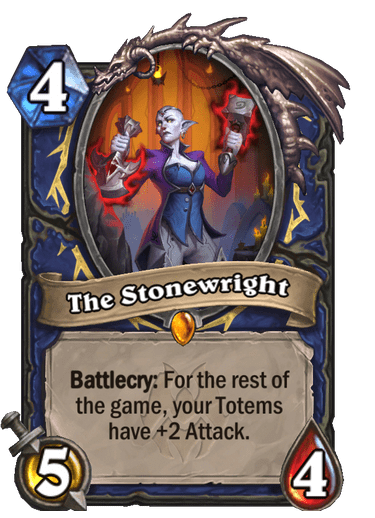 This card already frustrates us, and the expansion isn’t even out yet. If you draw it on turn 4, you’ll probably have an infinitely better time playing Totem Shaman and a much higher chance of winning the game, especially with Brilliant Macaw follow up. If you don’t draw this card, you’ll be playing a deck that may not seem to function.

And here’s the problem. Totem Shaman is already an archetype with a history of being an extremely polarizing deck due to how it inherently functions, and now it gets a single legendary that may have just as a dramatic impact on the outcome of a game as Drek’Thar or Barnes. If Totem Shaman is good, it will be unbearable. If Totem Shaman is bad, we have nothing to gain.

Shaman seems extremely well-rounded, and there are subtle elements to this set that could position it very well. We’ll first discuss the two main synergy packages in the class and then go beyond it.

Evolve Shaman seems to be geared for some sort of a comeback. Whether it’s full or partial remains to be seen, because unlike previous iterations of the archetype, we can see Evolve form a package of cards in an existing deck that’s not necessarily all about evolving.

We say this because Muck Pools is just nuts. It’s great for value trades and great for battlecry minions which Shaman already likes playing. It’s just a constant source of incremental gains, as well as the potential of generating mega blow outs with Goldshire Gnoll. Murloc Control Shaman will likely consider running a small Muck Pools package alongside Goldshire Gnoll and Crud Caretaker, for example.

Of course, there’s the option to go full evolve, with Tiny Toys/Convincing Disguise being available and Vashj offering another threat to the archetype. The deck is not going to be as fast as its previous iterations, and Team 5 seems to have taken care not to allow common games ending on turn 4.

The other notable synergy package in this set is totems. We’re not into totems nearly as much, though we do love Gigantotem, and it seems like a fun card to build around. If the meta is super passive and decks just AFK, the snowballing nature of totems could matter, but this archetype is going to struggle staying on board against decks that play minions with attack values that are higher than 0.

But here’s another important aspect of Shaman – the neutrals. There are two important neutral legendaries that could help Control Shaman’s chances in late game matchups, which are notable weaknesses to the deck since it normally lacks true inevitability and doesn’t handle decks that play off-board super well.

The first is Denathrius. Shaman may not be able to ramp into this card like Druid does, but its ability to close out games could suddenly become quite threatening with the deck already utilizing Bolner/Macaw. Plus, there’s even a chance it will run Kael’thas to cheat Denathrius earlier with a Piranha. You’re looking at the potential of Alterac Valley Y’Shaarj Shaman finding a new win condition and Taelan Fordring making an appearance once again to tutor a cornerstone 10-drop in the class.

The other important neutral is Theotar. Shaman already loves to run Mutanus, and Theotar is cheaper and arguably better in many matchups. A Brann/Theotar combo could significantly help Shaman take away key pieces from the very decks that tend to counter it, while giving them some piranhas in return!

We’re looking at a class with a superb defensive shell against board-centric strategies, thanks to Snowfall Guardian and Brilliant Macaw, potentially adding more ways to cheat mana with an evolve package or having OTK potential as well as late game disruption.

Somehow, we struggle to see how those are not the ingredients of a top tier performer.