In two previous articles, we showed that the coin differential in Hearthstone was at 3.3%. (See Whispers of the Old Gods meta (July 2016) and the Mean Streets of Gadgetzan meta (January 2017)) . Of course, we also mentioned and showed that the coin differential varies quite considerably across different decks and for different matchups. With the introduction of the Witchwood meta’s unique mechanics, we think it is important to re-visit this subject, especially in light of the findings below.

Overall coin differential in The Witchwood 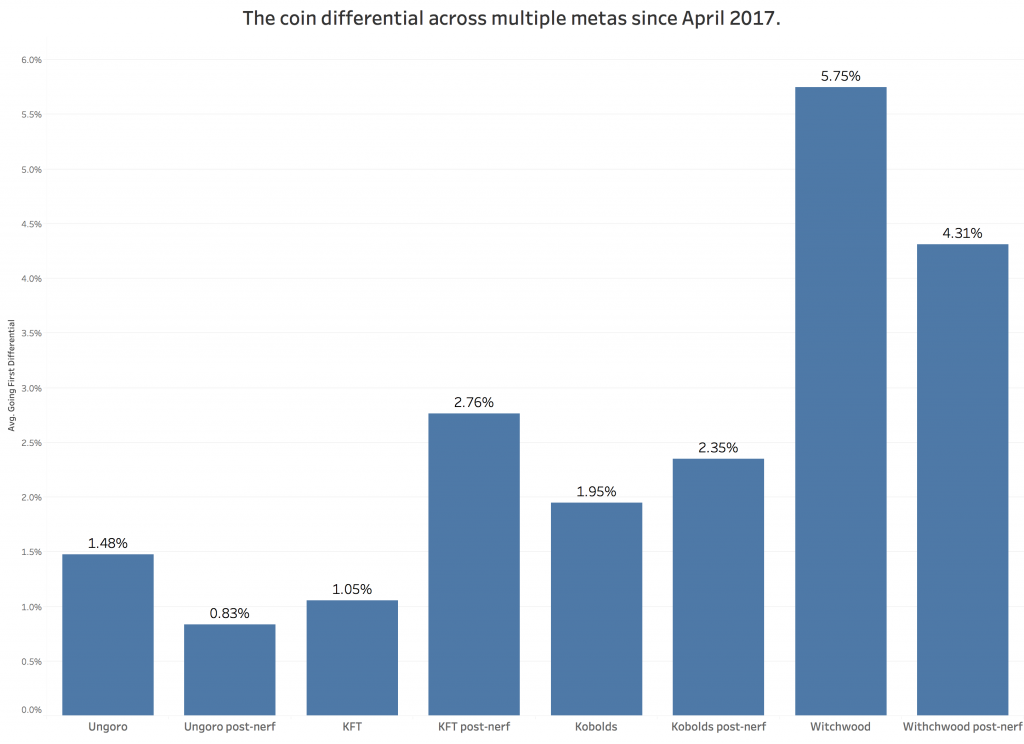 Our first chart shows how the coin differential has evolved in different metagames. We see that the advantage of going first declined to around 1% in Journey to Un’Goro, quite a considerable decrease relative to the previous 3.3% value. It hovered at around 2% in the metagames of KFT and KnC. However, we observe that the coin differential has increased quite dramatically in the first half of the Witchwood to 5.75%. The balance changes in May 2018 brought a slight decline to 4.3%. It means that the global advantage of going first is around 52.15%-47.85%. The coin differential in The Witchwood is the highest we have observed since we followed the metric.

What is the cause of this dramatic increase?

In the next table, we report the coin differentials of the popular decks in the Witchwood meta. The values are averaged across the pre- and post-nerf periods.

There is a clear pattern observed at the top of the charts. Baku and Genn proliferate decks that are highly dependent on going first. Odd Paladin and Odd Rogue have a coin differential of over 10%. To get some perspective, we have never encountered such a high coin differential. The top two decks are followed by Even Shaman and Even Paladin also boasting high coin differentials that would still surpass those of any deck in previous metagames.

Since Baku and Genn decks gain such a large advantage from going first, they warp the entire meta into having an advantage of going first. As a result, we see that only the highly reactive Priest decks win more when going second.

Our final chart depicts the coin differential across the matchup matrix during the final weeks of the The Witchwood. A blue color indicates that the deck in the row wins more often against the deck in the column when it goes first, while orange indicates it wins more often when it has the coin. The colors do not signal the actual win rates, just the “coin differential”! You can hover over the boxes for the win rate information.

The most dramatic numbers relate to the Baku and Genn mirrors. For example, in the Odd Paladin mirror, the coin differential is 24%! In other words, the Paladin that goes first wins 62% of the time. The other Genn and Baku decks exhibit similarly large discrepancies in their respective matchups.  Of course, each matchup between Genn and Baku decks is extremely warped in favor of going first.

The only exception is Even Warlock, which does not have a high coin differential, because it is not focused on tempo in the early game. In addition, Even Warlock gains a special advantage from  the coin, which allows it to drop a Mountain Giant on turn 3.

Throughout the history of Hearthstone, aggressive decks tend to favor going first. However, the extent to which Baku and Genn decks favor going-first is unprecedented. Their presence in the meta is highly warping when it comes to coin differential. This might have an unusually high impact on the game, particularly in tournaments. Having such a high global coin differential can increase the variance of series outcomes. While The Witchwood meta has been very diverse in terms of strategies and was overall enjoyable, one has to watch out for the effect of Baku and Genn on the global coin differential and the meta as a whole. Baku and Genn are both powerful build-around cards, and they clearly come with some design challenges going forward.