Welcome to the 199th edition of the Data Reaper Report! 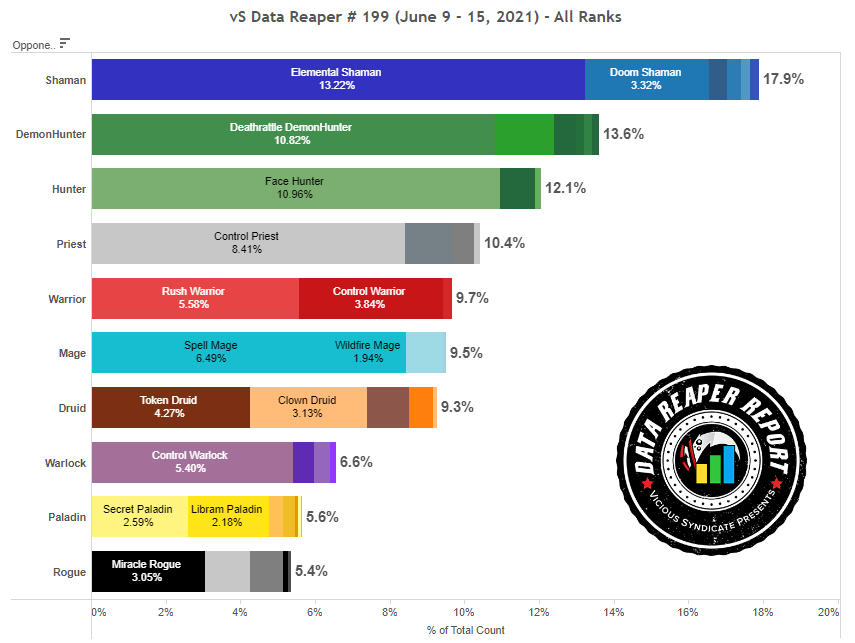 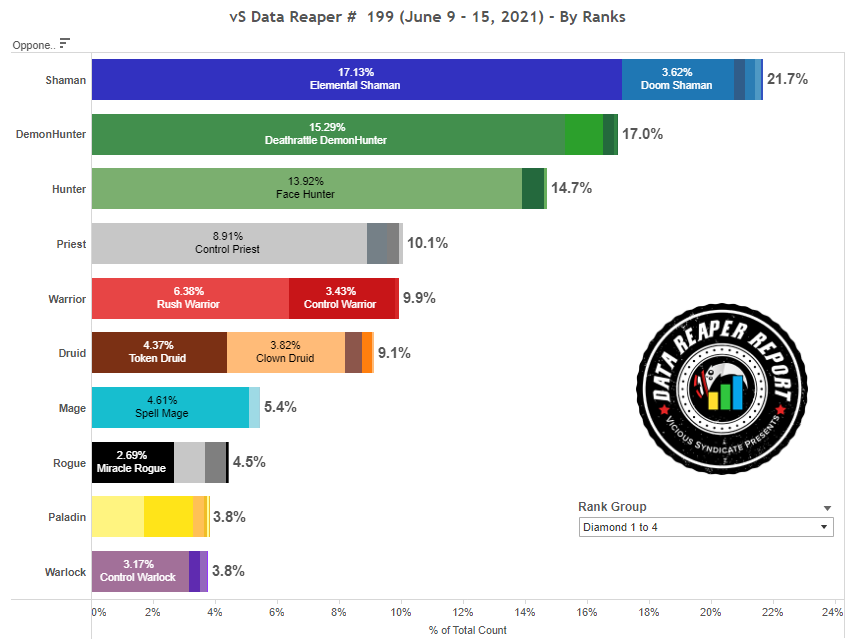 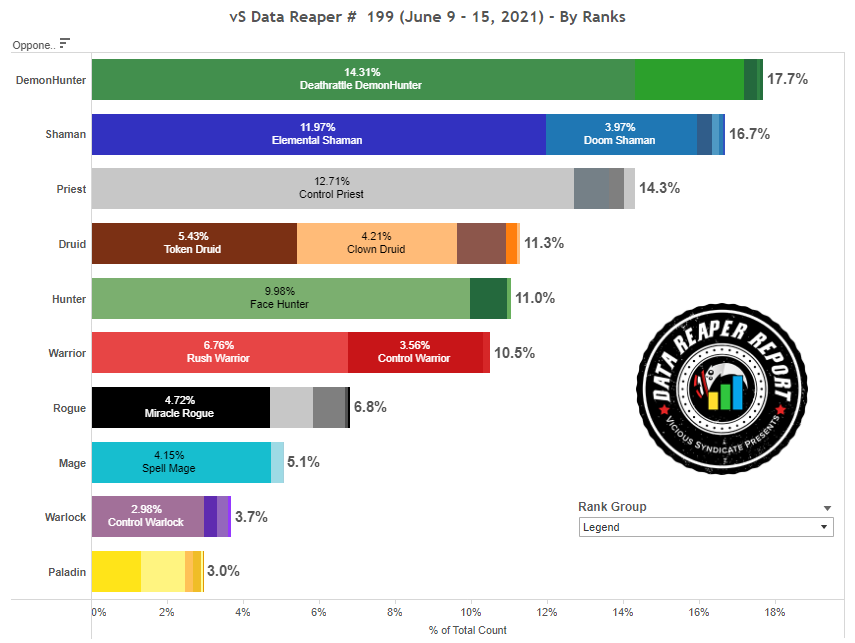 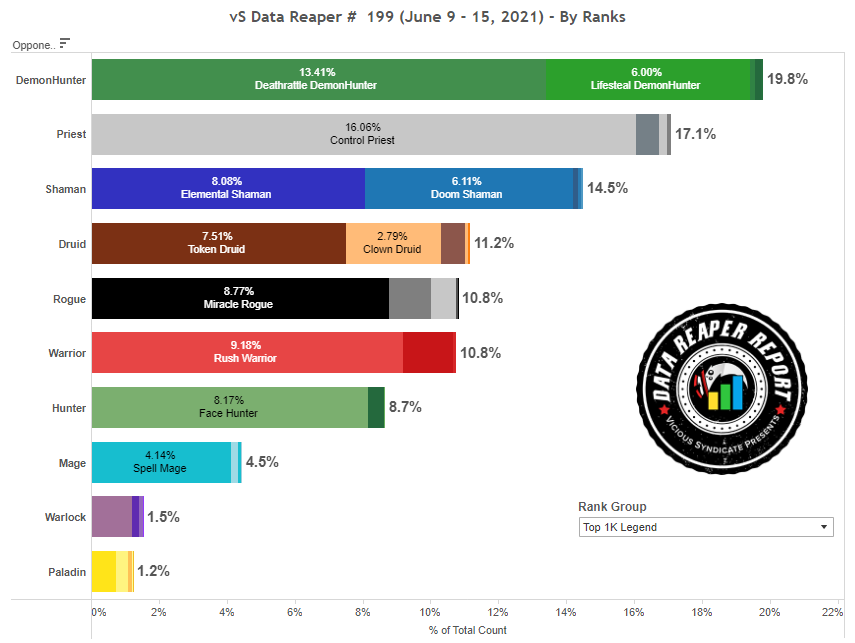 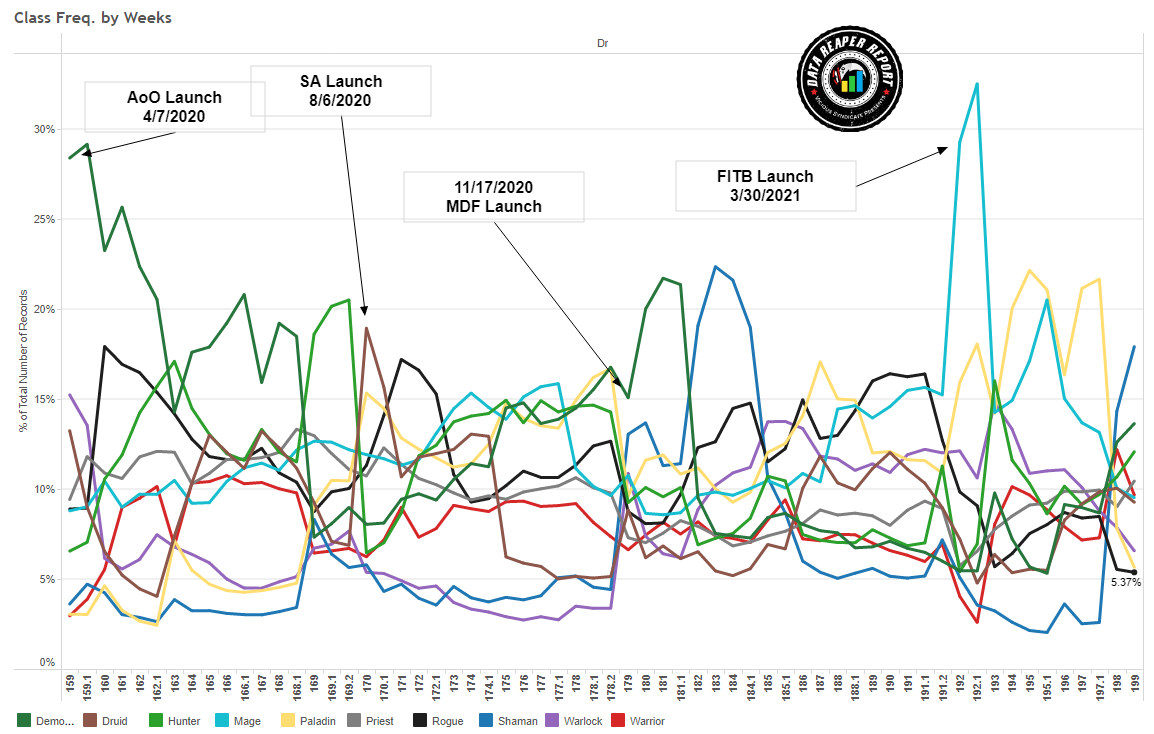 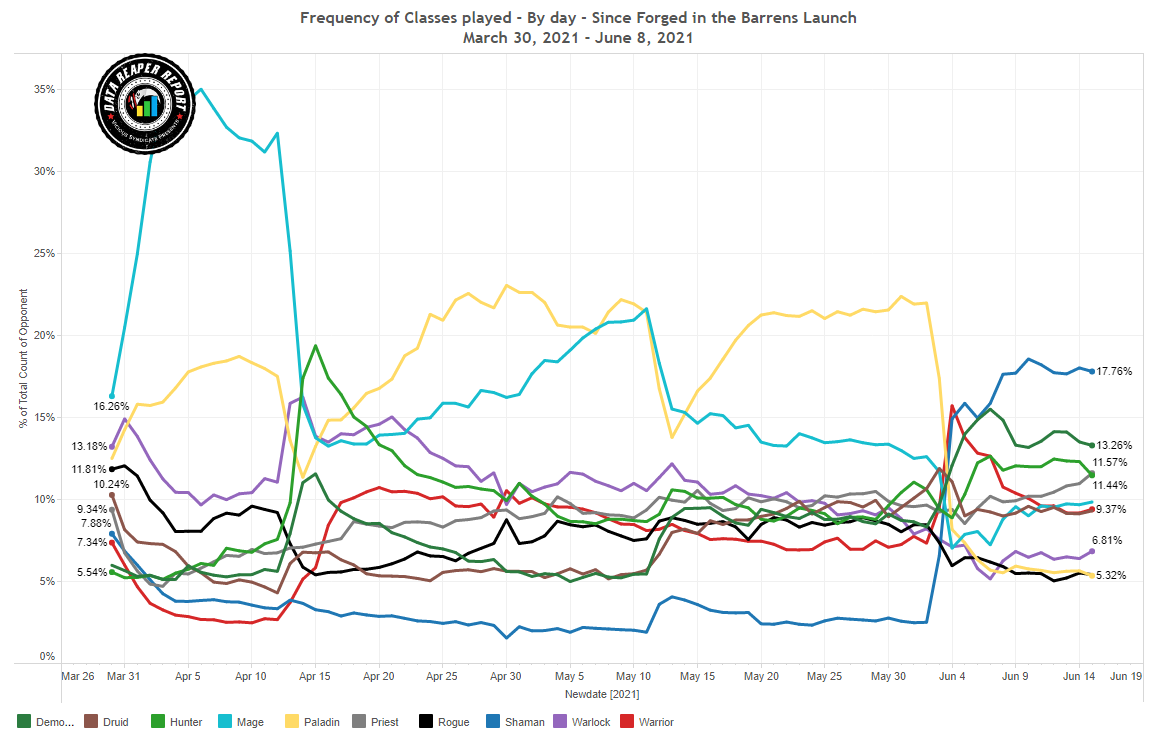 The popularity of Deathrattle DH has stabilized throughout ladder. The archetype remains fairly diverse in its builds. Lifesteal DH has risen in play at top legend, nearly doubling its numbers compared to last week.

Control Priest is rising at all levels of play, and it’s become the most popular deck at top legend. The archetype is mostly split into ‘Vanilla’ & ‘Yoink’ builds.

Shaman is the most popular class outside of legend. Interestingly, Elemental Shaman is rising in play, while Doom Shaman is in decline. The Elemental Shaman cluster is split into two variants as well, with the Doomhammer wielding variant seeing an uptick in play and going through changes, especially at higher levels.

There are no significant developments in Rogue. Miracle Rogue is seeing slightly more play at top legend. Interest in Secret & Poison Rogue is low.

Control Warrior is gradually disappearing from the format in a way most bad decks do. You still see quite a bit of it throughout ladder, but it’s already non-existent at top legend, and we expect that pattern to trickle down. Rush Warrior’s play rate is stable, but the archetype is split into different build approaches: Vanilla, N’Zoth, and Saurfang.

Face Hunter’s play rate is changing from its normal pattern pre-Caverns, as it remains prevalent at higher levels of play, a sign of newfound respect to the archetype and its strength against the current field, even in the presence of Control Priest.

Spell Mage is popular at lower rank brackets, but fades as you climb ladder. It is a fringe deck at higher levels of play, though it did see a small uptick at top legend, a likely response to the popularity of Control Priest.

Control Warlock behaves similarly to Spell Mage in its presence throughout ladder, but it shrinks more dramatically as you climb, and its presence at top legend is non-existent.

Paladin is in tatters. None of its archetypes attract any interest at the higher end of ladder, and its development is dead, with just remnants of the class’ former glories populating lower ranks. 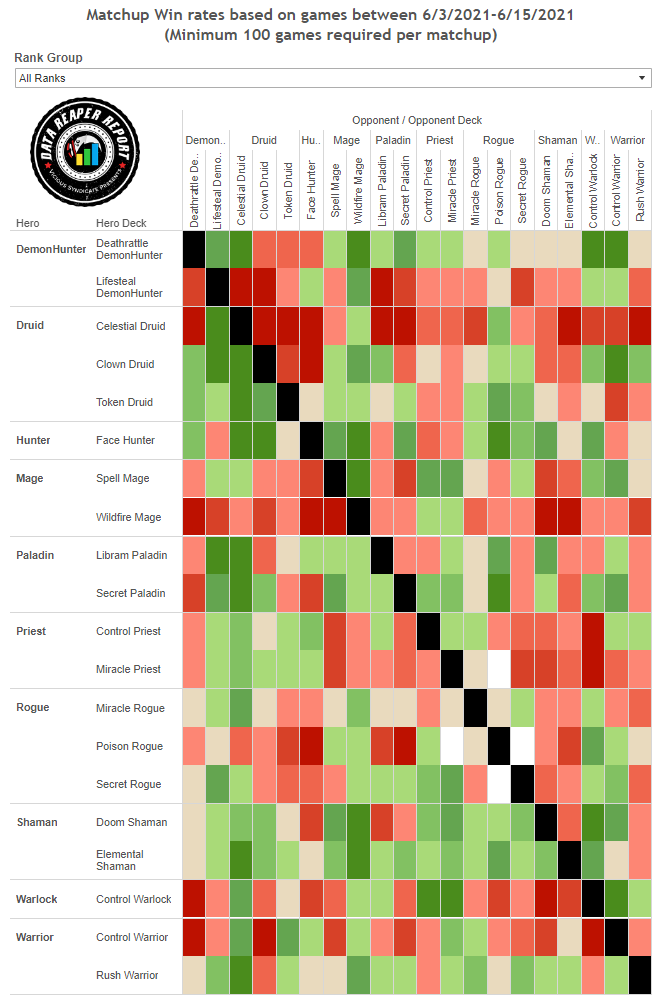 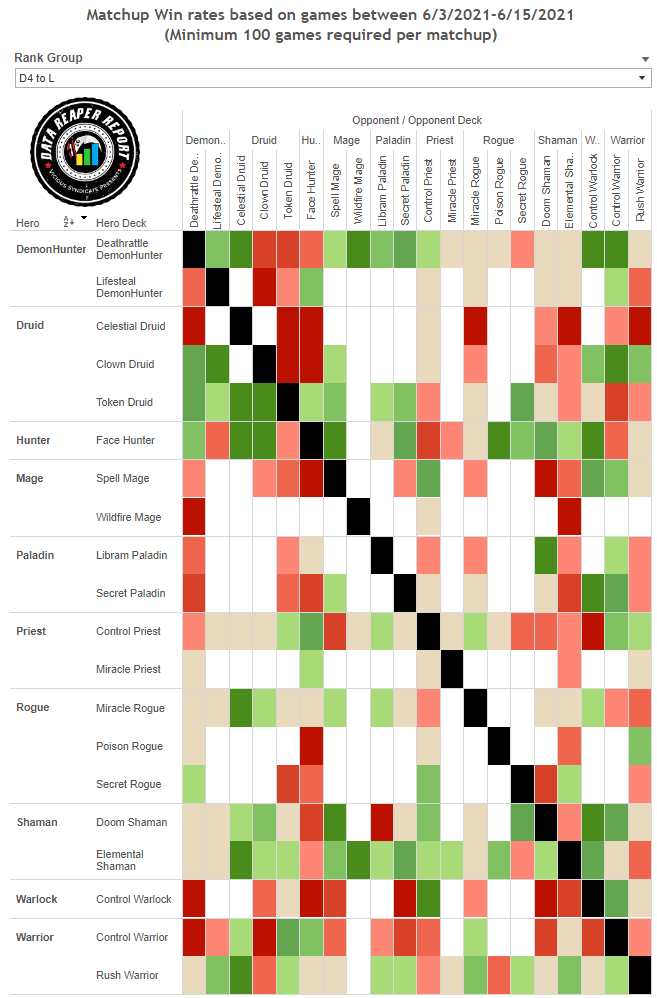 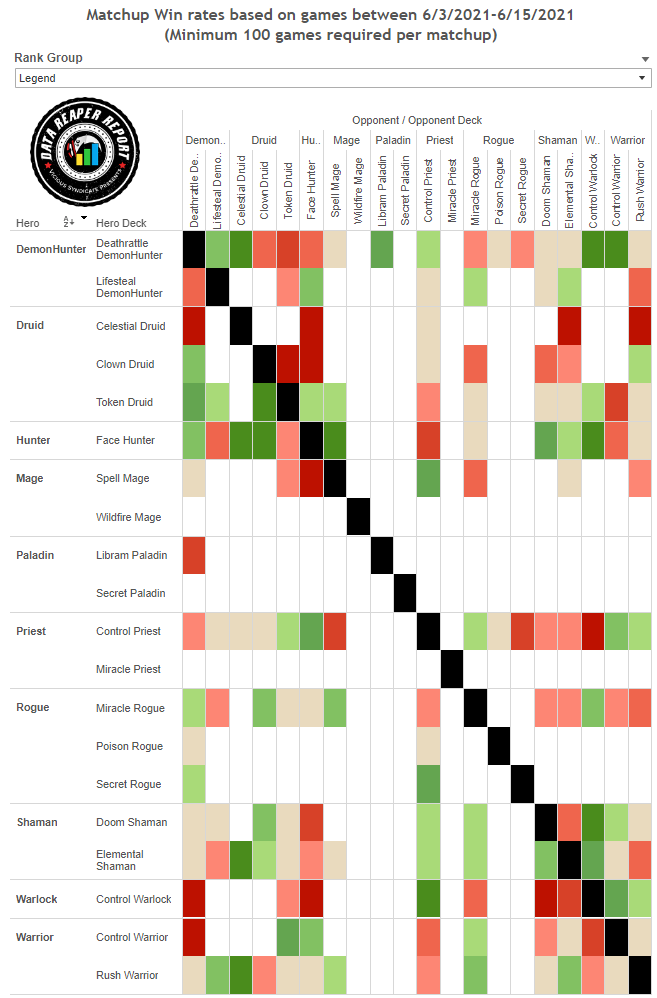 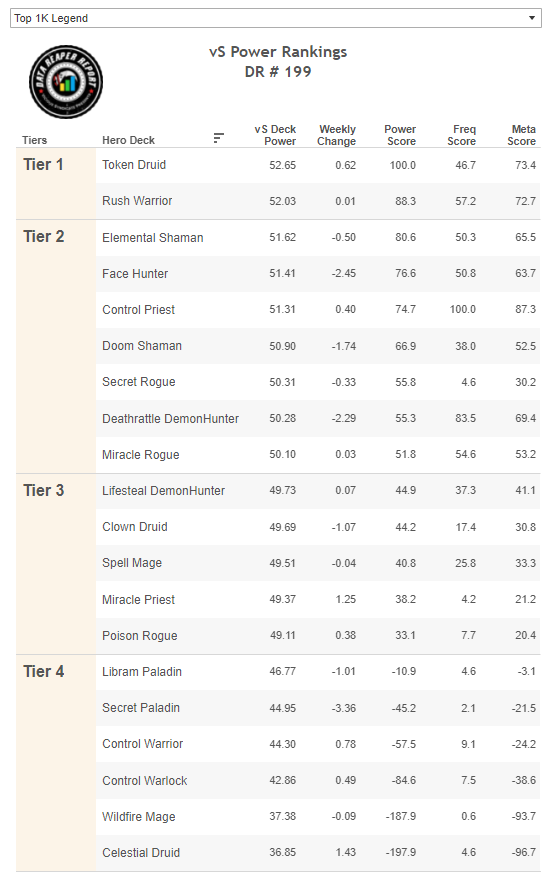 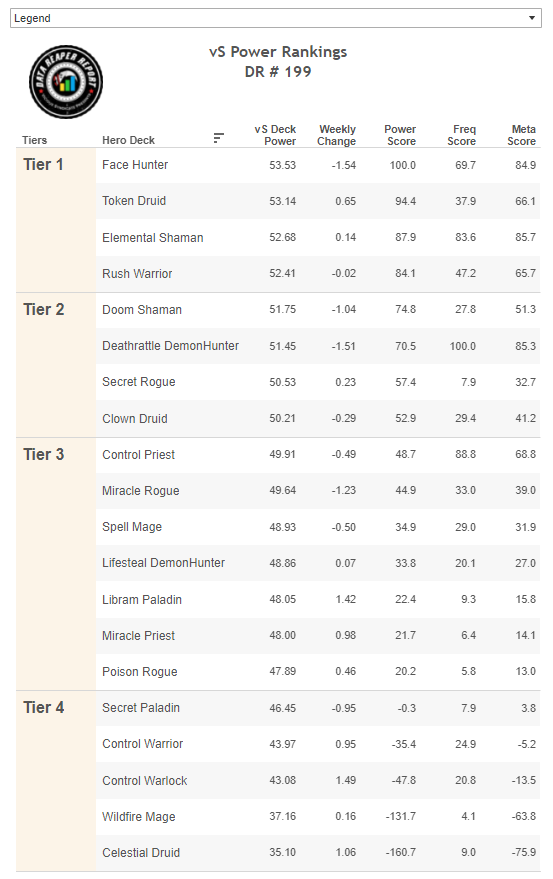 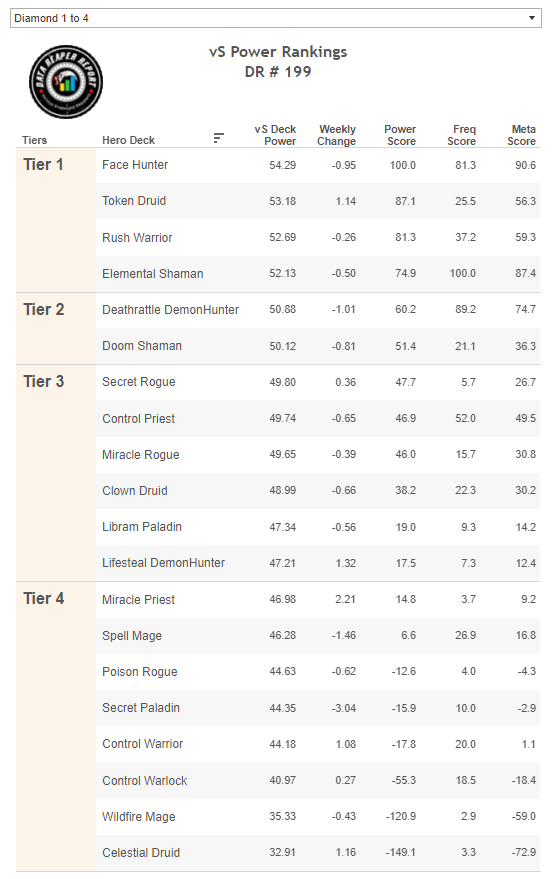 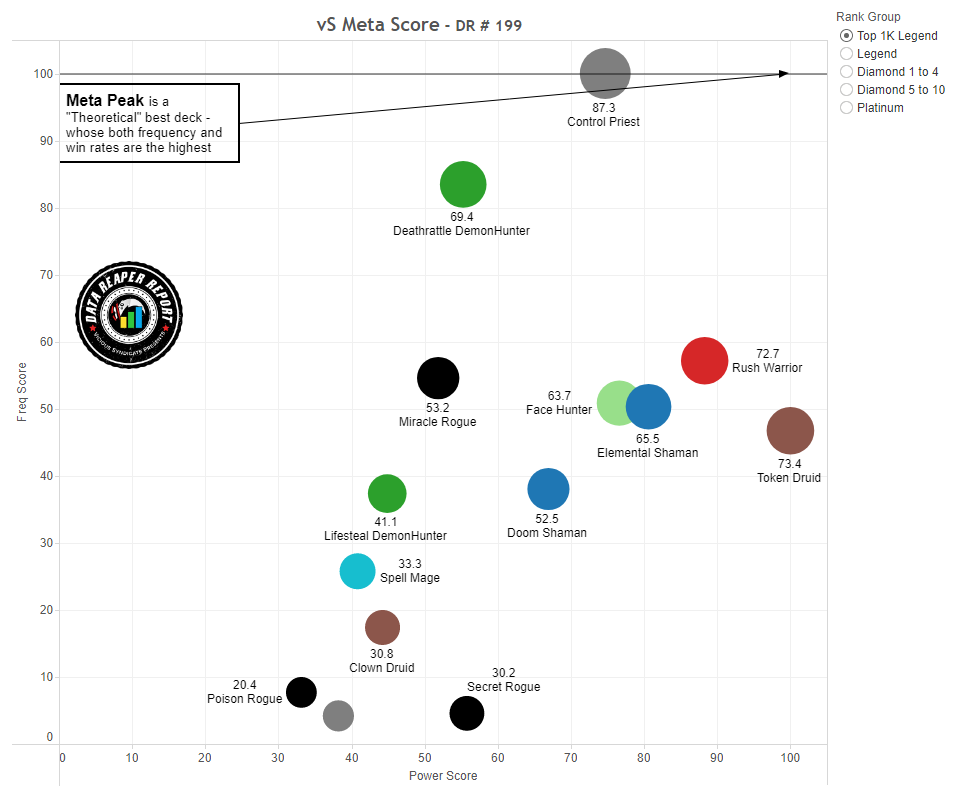 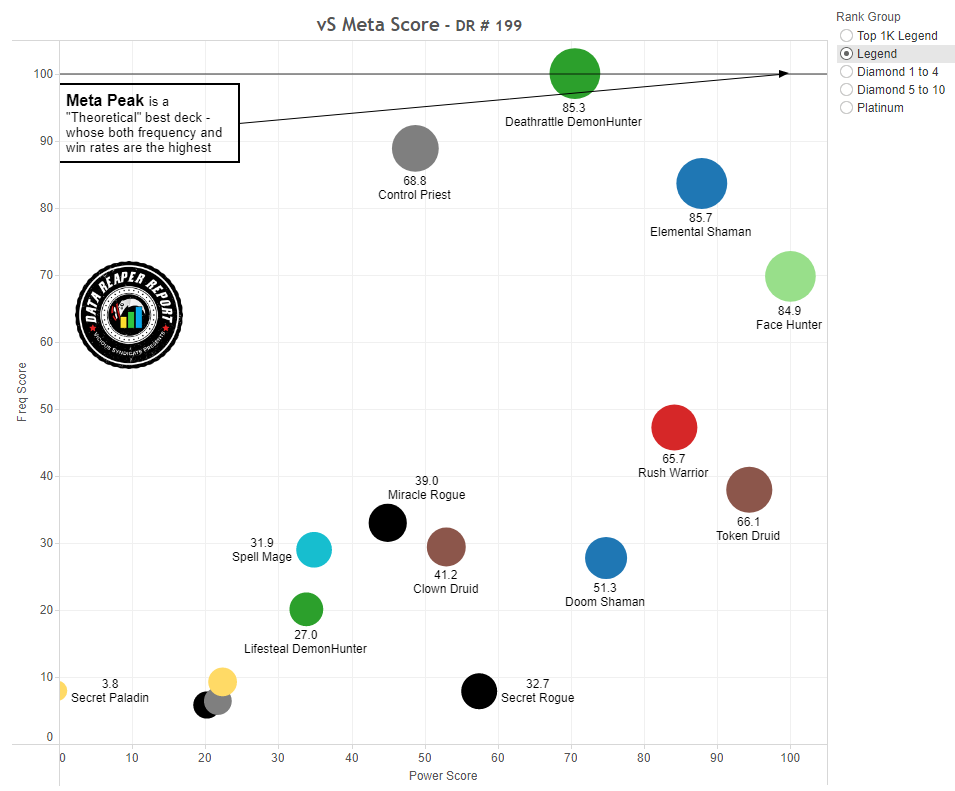 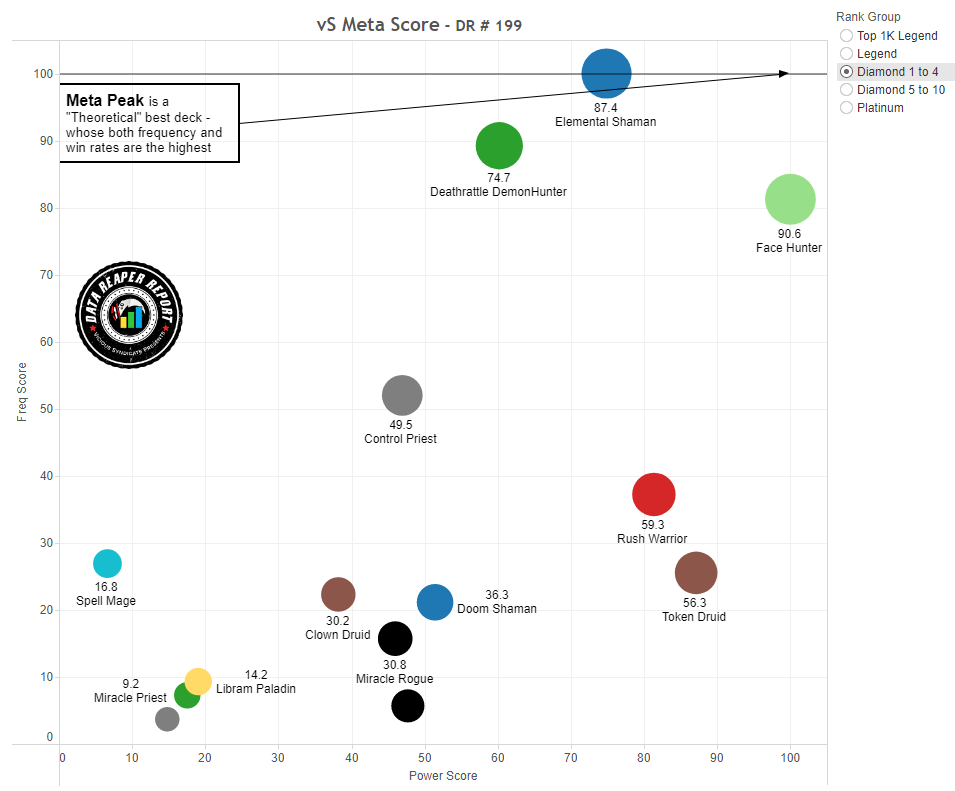 It’s encouraging to note that the Wailing Caverns meta is shaping up to be fairly diverse, and at higher levels of play, very balanced. We have two classes that are truly struggling to find their footing, but the rest have found their competitive niches. There are still more developments coming up that are worth discussing.

Deathrattle Demon Hunter is declining in its performance following the rise in the field’s overall efficiency and the decline of weak archetypes. The deck remains strong and competitive throughout ladder, but doesn’t particularly excel against the best decks.

The recommended build remains the same as last week, as it is well-rounded against the most popular decks in the format. There is a great temptation to run a more aggressive list with Felsteel Executioner in order to perform better in the Priest matchup, but the resulting sacrifice in other matchups is very significant.

Lifesteal Demon Hunter saw a rise in the play rate of Acrobatics, and we’ve found it to be slightly stronger than Spectral Sight. The final choice involves picking two out of Throw Glaive, Ooze, and 2nd Augmerchant.

Control Priest is looking quite strong at top legend, and we believe to have found the right balance in both of its variants: Vanilla & Yoink.

The Vanilla build from last week appears to be correct, and the last card comes down to Naralex vs Illucia. You could run both and drop Condemn or Hysteria, but the AOE effects appear to be extremely valuable. Illucia is generally only better vs Lifesteal DH, since the threat of having her is good enough to prevent Miracle Rogues from saving up their combo pieces, while Naralex is great in this matchup as well.

The Yoink build sees one adjustment, which is cutting Veilweavers to bring back Hysteria. We’ve mentioned before the importance of Veilweaver in the mirror, but the card has proven to be too much of a liability in this variant. Cabal Acolyte is so strong in the mirror that it keeps the matchup close enough to 50%. If you’re running into a lot of threat-dense decks, you could consider running the 2nd copy of Against All Odds over the 2nd Raise Dead.

Shaman is seeing a lot of development, as the class is working out how to best optimize its newly emerging archetypes following the Wailing Caverns additions.

Elemental Shaman is split into two approaches. The first is the board-centric Whack-A-Gnoll Hammer build which you’ve seen last week. This is currently the strongest and most reliable performer within the class. The 30 cards listed look perfect.

The second is Doomhammer wielding, and relies on burst to end games. This variant looked clearly inferior last week, but has made some improvements since. It seems to be a complicated deck to build, so this drove us to provide you with an experimental list that attempts to strike the right balance between its early game board control and mid-to-late game win condition.

This variant commonly drops elementals such as Gyreworm, Menacing Nimbus, and Earth Revenant, but we suspect they should be kept. In the featured list, we’re keeping every elemental in our curve, with the exception of Fire Elemental, since it clashes with Doomhammer. This maintains our ability to fight for the board effectively.

What we’re cutting instead are filler spells that look weak in this variant: Lightning Bolt and Serpentshrine Portal. We’re shrinking the spell package to contain only spells that work well with Doomhammer as burst follow-up (Rockbiter, Stormstrike, Dunk Tank). This gears Primal Dungeoneer to find our finishing package more consistently and makes Notetaker an intimidating combo piece on turns 7 and 8.

So, we keep Elemental Shaman’s ability to take control of the board, and provide it with more consistent burst. Looks good on paper, but as we’ve said, this is a novel list we want data on.

Doom Shaman is deciding on its last few cards, and we’ve noticed that Archdruid Naralex is a promising addition to the deck that very likely makes the cut.

Token Druid is one of the strongest decks on ladder, carrying a very balanced matchup spread that only shows vulnerability to Control Priest out of the top meta decks. Its build has long been figured out. Pride’s Fury and Soul of the Forest help you in your worst matchup.

Clown Druid is the exact opposite. It’s a highly polarizing and very erratic deck that can find great success in some matchups but crumble in others. Cenarion Ward has popped up within the archetype and looks extremely valuable when stabilizing in faster matchups you normally struggle with (Hunter). Blademaster Samuro has also appeared and looks great. Even though it’s highly dependent on Survival of the Fittest to come online, it’s so strong at that point that it’s a worthwhile inclusion. If you’re running into a lot of Priests, you can consider a Ward/Y’Shaarj split.

Move away, N’Zoth, it’s time for Saurfang to shine. A new week of data has arrived and with it, the conclusion that Rush Warrior is likely better off not running the Old God at all.

As the meta becomes more ruthless and efficient, Rush Warrior is seeing its greediness punished in several matchups, with Face Hunter representing one opponent that has become far more difficult to deal with. This pushes Warrior to run a leaner and more defensive build, going back to Warmaul Challengers. A star addition of the Vanilla variant is Naralex, which can help the Warrior set up a blowout turn in the mid-game against faster opponents, but still carry value in slower matchups.

But this doesn’t solve one major problem for Rush Warrior, which is the increasingly popular Priest matchup at higher levels of play. This is where we’ve found that Saurfang does a better job than N’Zoth, since it offers card draw potential thanks to Stonemaul Anchorman. We’ve also found that the Saurfang variant retains better matchups into faster decks, partly due to being a better Kresh enabler.

Control Warrior sucks, but one funny development has seen players cut C’Thun from the deck, and it’s once again proven to perform better without it. This leaves the Old God as a necessary card in only one deck in the format, which happens to be Tier 37.

Rogue has settled into a middling position. Miracle Rogue and Secret Rogue are fairly balanced decks that can’t seem to get an edge on the field, running solved builds that are unlikely to improve. There have been experiments with Scabbs Cutterbutter and even Barrens Blacksmith in Miracle Rogue, but they look clearly inferior to the standard build.

The meta has expectedly become more hostile to Face Hunter, and the deck has multiple counters, but it is still very strong. Wriggling Horror is helping Hunter outpace its opponents, leveraging its initiative advantage in many matchups.

Don’t expect to see any news beyond a few tweaks to this deck. Other Hunter archetypes are just not competitive.

Spell Mage is a reasonable Priest counter at higher levels of play, but is otherwise an underwhelming ladder choice. There are no developments within the archetype or any other Mage one.

Control Warlock is the weakest it’s been throughout Barrens. Wailing Caverns has increased the power levels of the field, and Warlock simply can’t deal with it.

Paladin has been obliterated by the balance changes. It ranges from pretty bad to unplayable. It will need new cards (or buffs) in order to recover a strong early game, and its late-game options have been made redundant.

Token Druid is clearly the biggest winner of the week. The fall of Control Warrior and the resulting decline of Rancor from the field is giving the archetype much joy. There aren’t many other reliable ways to stop this deck. Sometimes, you’re just going to get rolled.

Another deck to keep an eye out for is Control Priest, which is becoming increasingly influential at higher levels of play. We expect to see very little Priest in the upcoming Master’s Tour, because it’s going to be banned often. It’s arguably overpowered in conquest Bo5 format, since some of the strongest conquest decks are countered by Priest, while building a lineup to reliably counter Priest seems very difficult to execute.