Welcome to the 201st edition of the Data Reaper Report! 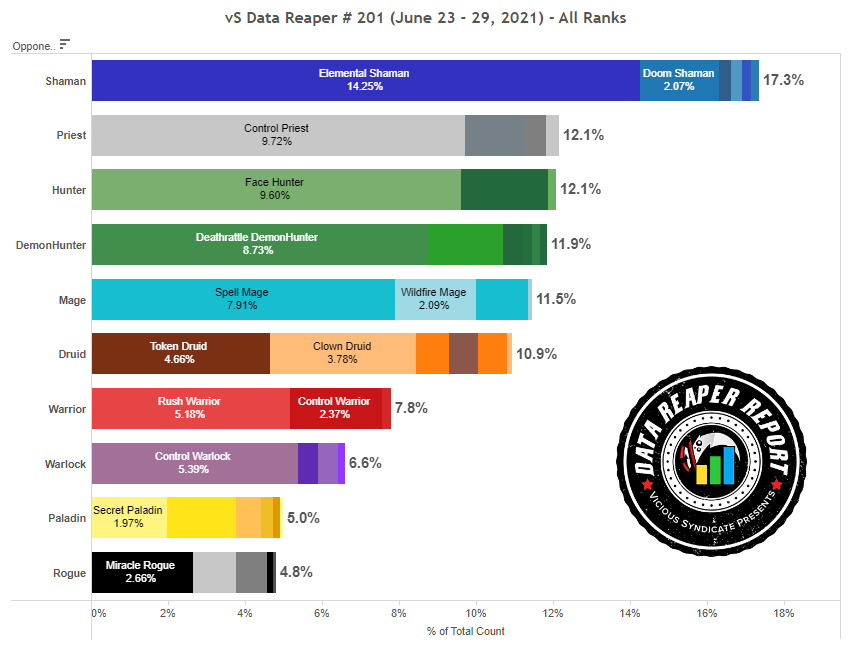 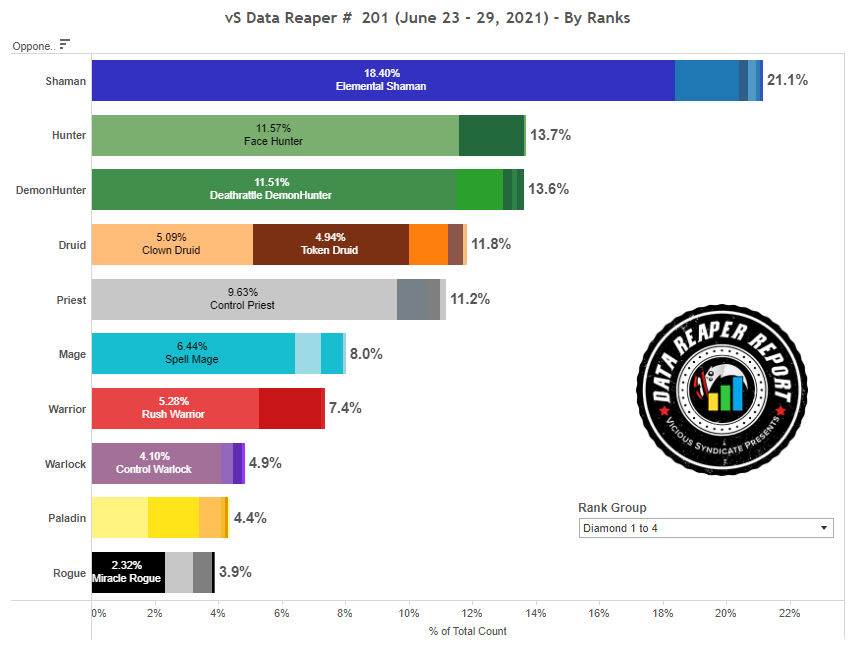 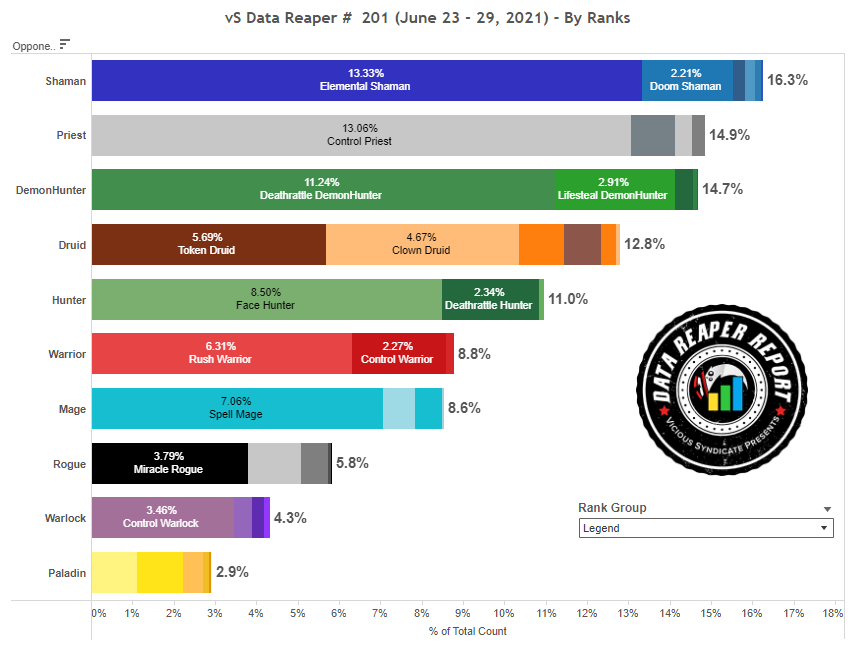 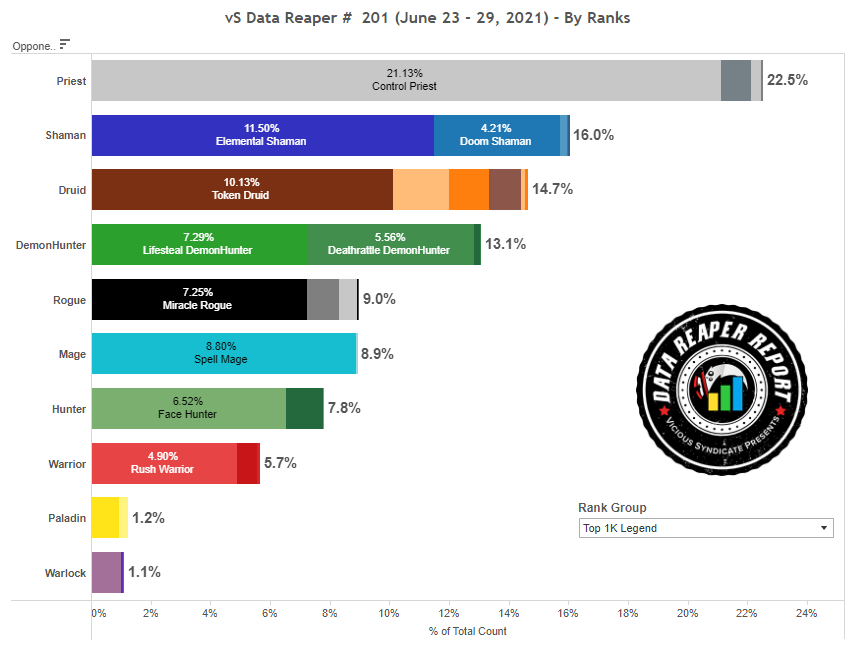 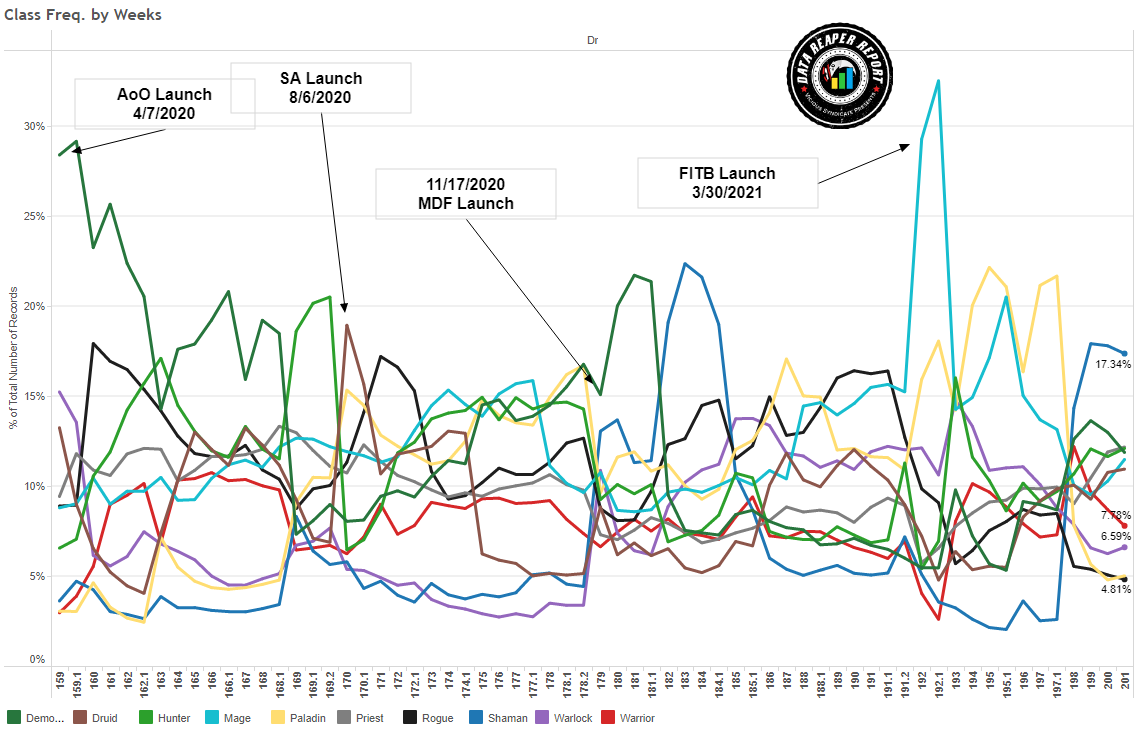 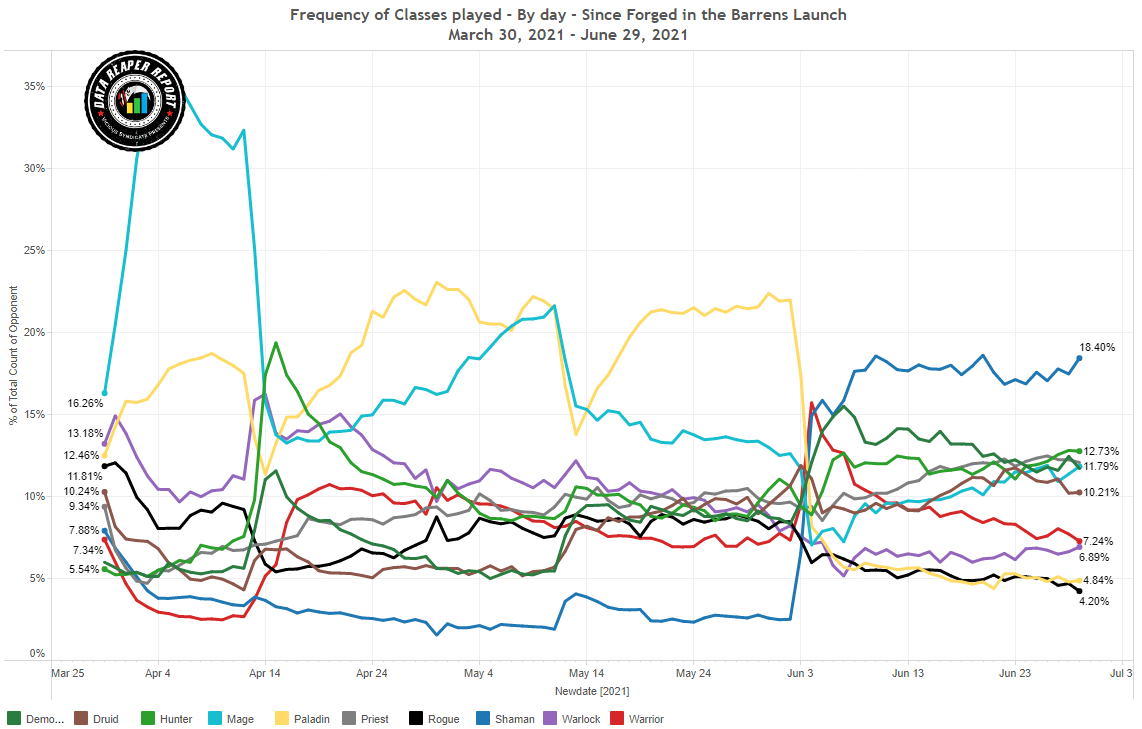 The Priest population may have stabilized at most rank brackets, but Control Priest keeps rising at top legend and has now eclipsed 20% by itself. It is very clearly public enemy #1 at higher levels of play, while never looking like a serious threat elsewhere.

As such, Shaman’s high rate play throughout ladder is now fully extending into top legend, where it offers players some of the best answers available to Control Priest. The higher you climb at legend, the more common Doomhammer is, whether utilized in Elemental Shaman, or in the non-tribal style of Doom Shaman.

No significant changes in Druid. Token Druid is seeing more play at top legend, and it might be the only deck that is known to lose Priest, yet seems to continue to be highly valued by top legend players.

Deathrattle DH is declining, and this decline is more noticeable at higher levels, where Lifesteal DH is now more popular. This is very likely the result of Token Druid’s increased play rate, as this matchup is quite miserable for the DH.

Rogue is in serious stagnation, with the most noticeable decline occurring at top legend. Miracle Rogue is well known to be unfavored against Control Priest, and this one fact seems to discourage players from piloting it.

Spell Mage has risen in play throughout ladder, doubling its numbers at top legend (!). This might be the biggest change in the meta over the last week. Did Priest’s rise in play create a significantly more favorable environment for Mage to succeed in, or are we witnessing a player base that is completely fed up with Priest, vowing to destroy it no matter the cost? We think the latter is actually a more likely explanation!

Much like most decks that are unfavored into Priest, Face Hunter has seen a decline in play, but new developments within the class have seen Yogg & Load Deathrattle Hunters emerge into the scene. Could this new archetype become a late-blooming meta breaker, or are we just baiting you with false suspense because we’re bored?

Loses to Priest? Down you go. While holding up everywhere else, Rush Warrior sees the most dramatic collapse in play at top legend. This wraps up the concluding message: the meta throughout most of ladder looks settled and ‘solved’. We don’t see many changes there. The glaring exception is the top legend meta, which has sworn an oath to make Priest’s life as difficult as possible. This means playing less with decks that fall prey to it, even if they seem pretty good overall.

The potential return to viability of Libram Paladin has not sparked any renewed interest in the class, which isn’t surprising. Warlock remains the zombie class that’s quite prevalent outside of top legend, for no reason other than being fun, because it’s definitely not a winning pick. 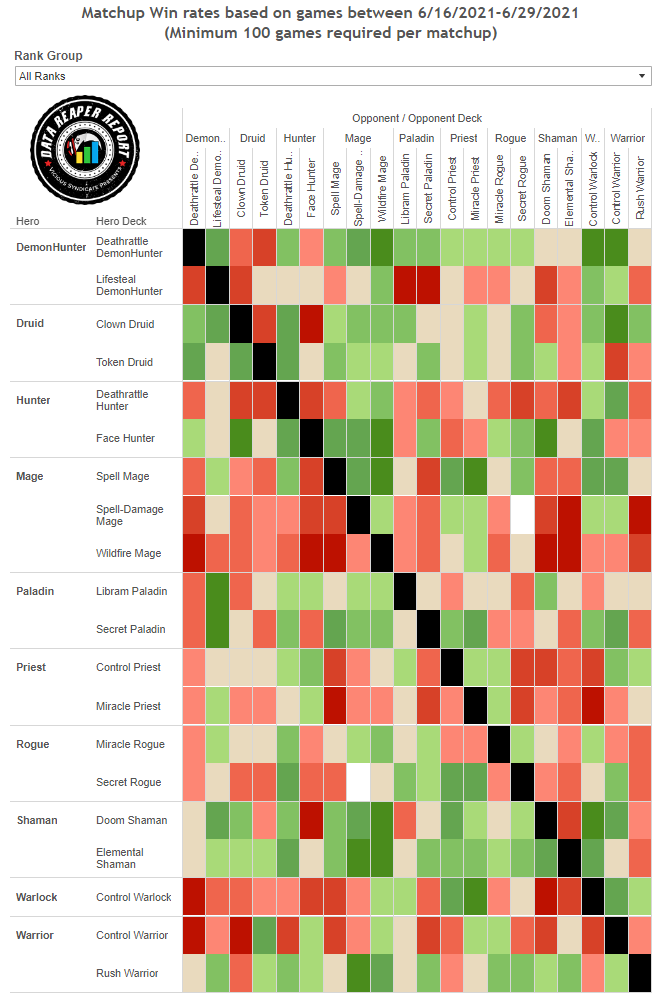 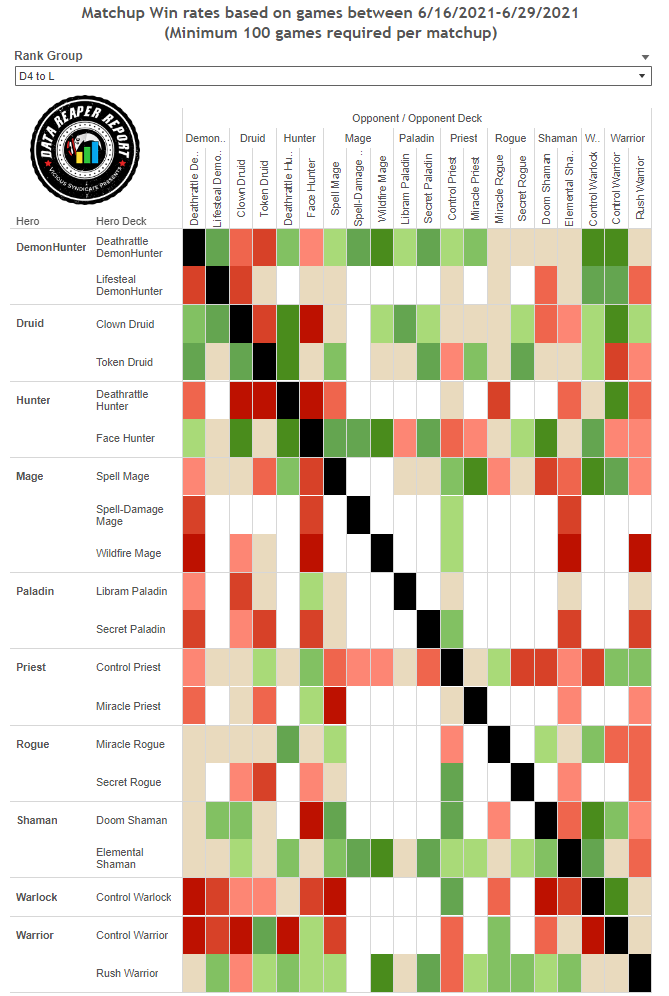 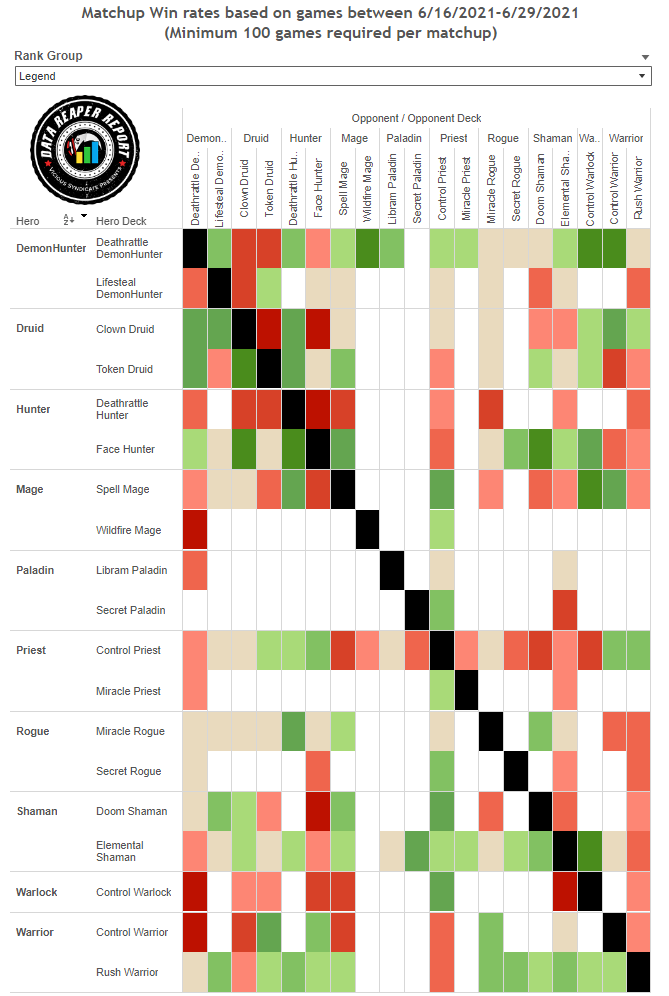 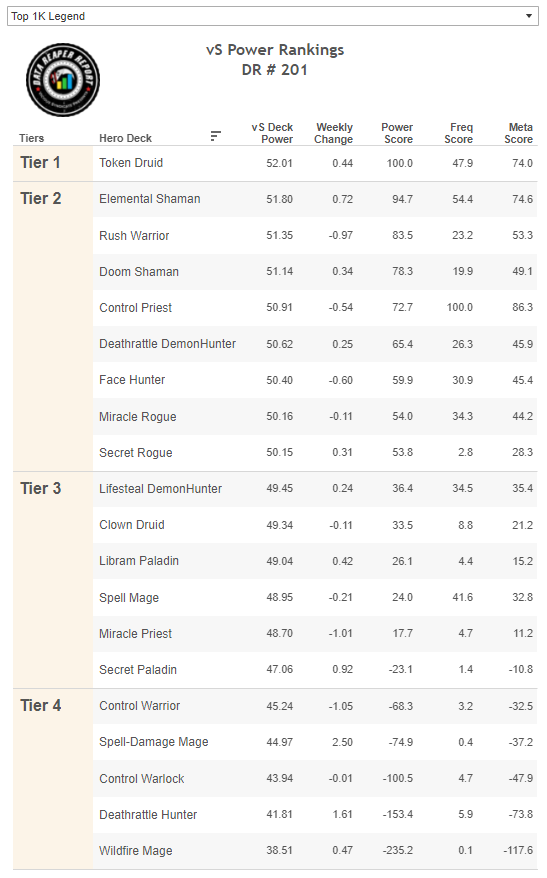 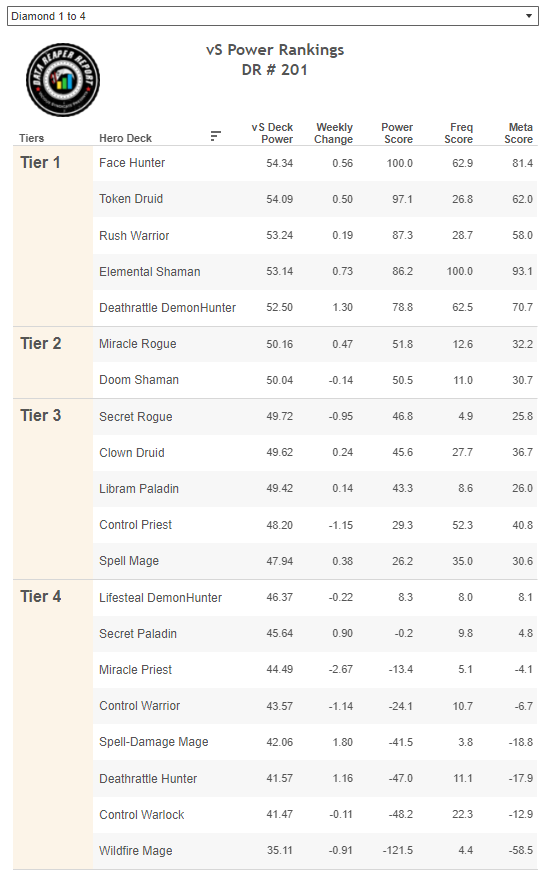 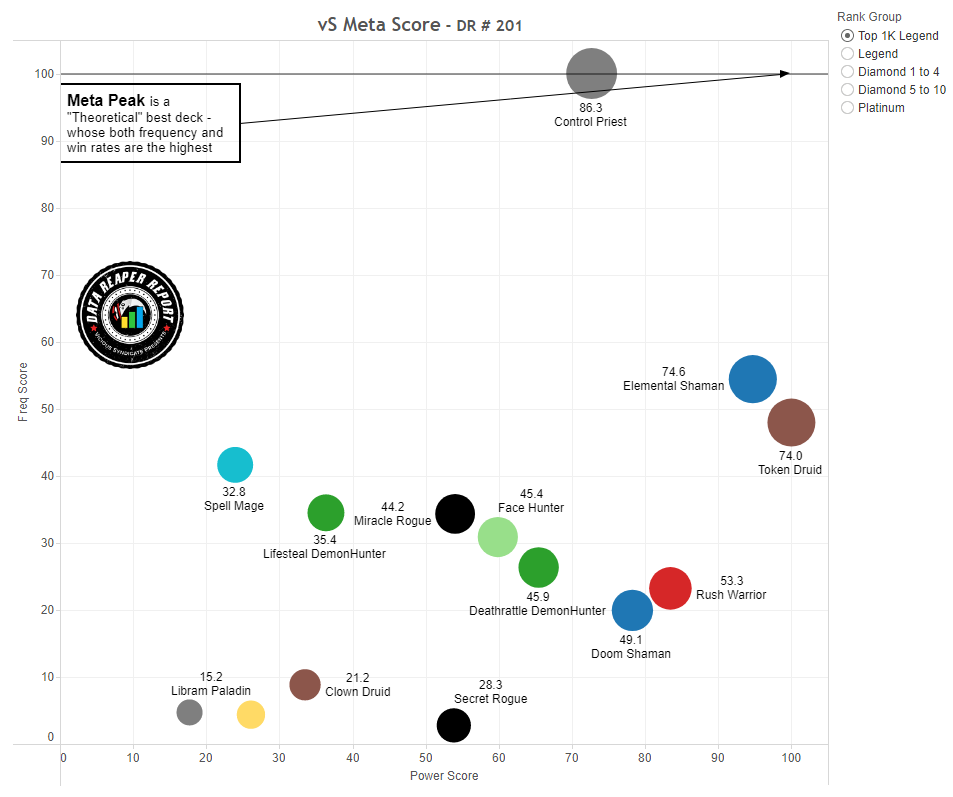 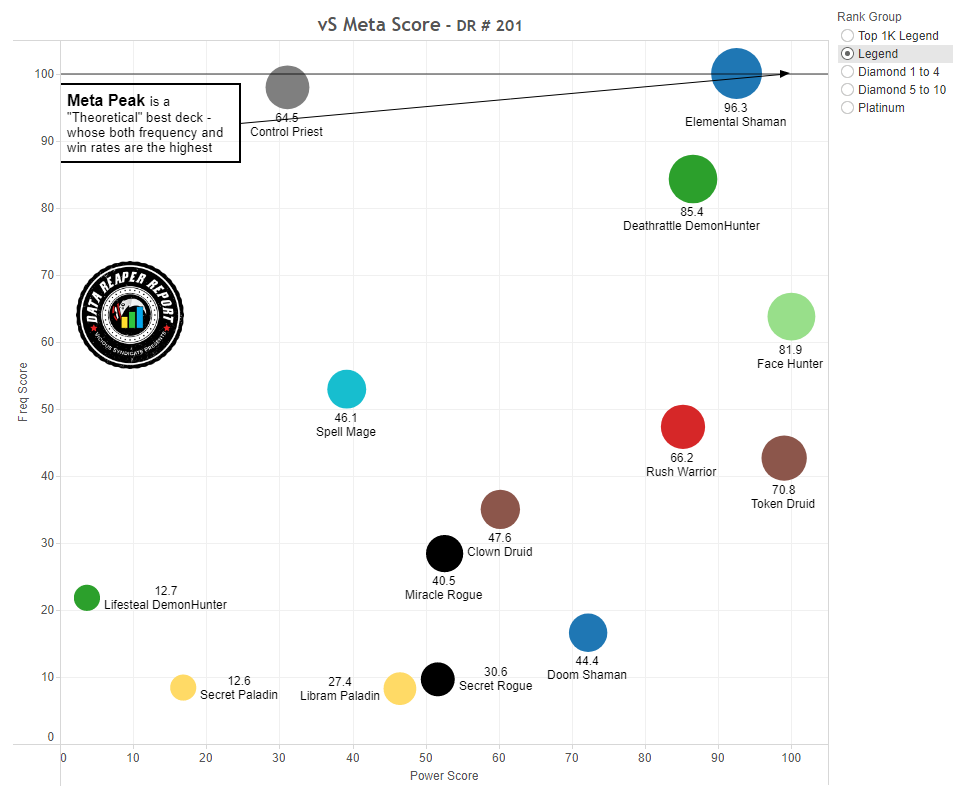 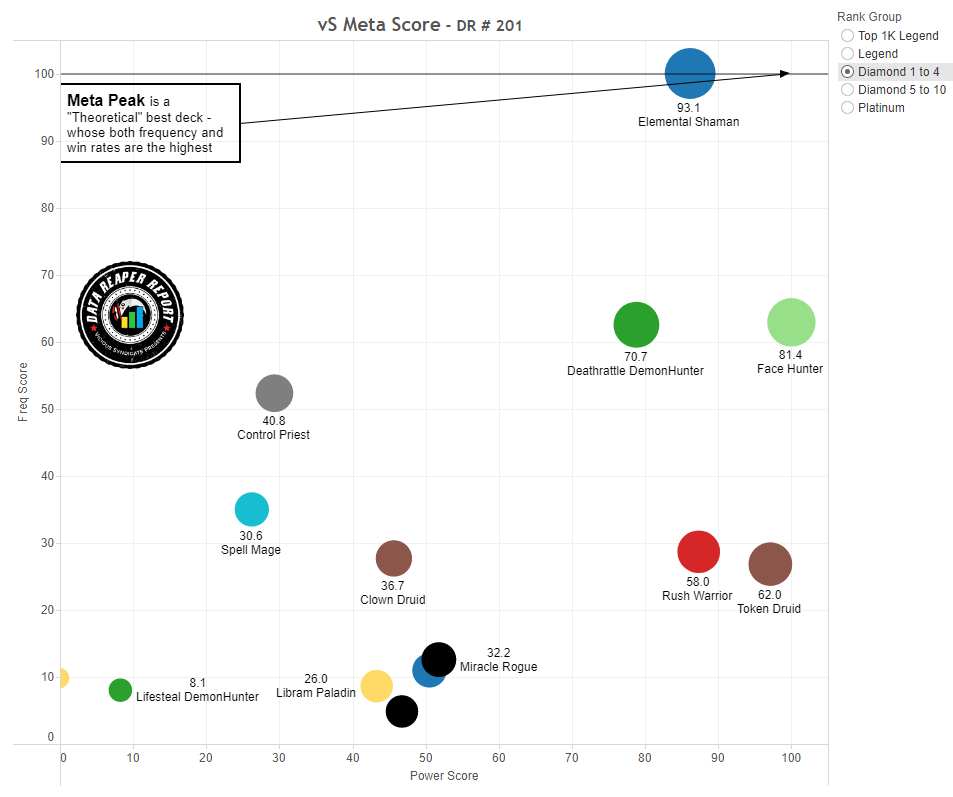 Control Priest’s rise in play at top legend has increased the field’s efforts to punish it. Shaman and Spell Mage are specifically selected to beat Anduin down, while other decks have improved their performance against Priest through superior card choices for the matchup, which we’ve detailed in last week’s report.

So even though the mirror matchup is still very popular, C’Thun has gotten noticeably worse. Players have begun to move away from the Old God and back to leaner builds that perform better against Priest’s counters.

One build that is propagating successfully cuts Hysteria for Holy Smite and adds Sethekk Veilweavers back into the deck. Smite helps Veilweaver become a more consistent card, and offers an early game answer to Wailing Vapor. This build is best utilized at top legend. The Yoink build continues to produce the best results everywhere else.

Shaman remains highly successful, recognized for its flexibility and strength at all levels of play. It is probably the most well-rounded answer to Priest.

The featured builds have proven to be perfect. Whack Elemental Shaman is the strongest option throughout most of ladder due to its very balanced matchup spread. Doom Elemental Shaman is stronger at top legend thanks to its improved Priest matchup (as well as Lifesteal DH). Doom Shaman takes it even further when it comes to relentlessly countering Priest, but suffers from the most polarizing matchup spread of the three.

Token Druid is one of the best ladder decks in the game, if not the best. While not appreciative of Priest’s presence at higher levels of play, things are not that bad when Priest keeps the Warrior population down.

We’ve collected more data on Guidance, and it’s become very clear that it’s a superior card to Soul of Forest. Even against Priest, you’re not losing % by making the switch.

Other Druid decks have stagnated, waiting for Stormwind to provide them with new stuff.

Deathrattle Demon Hunter’s main issue on ladder is Druid. The deck is simply ill-equipped to counter Druid’s game plan due to its lack of AOE, while its pressure plan is too slow to race it consistently. The good news is that other matchups are very manageable. Eye Beams make the Hunter matchup close, and if you’re interested in beating Priest, Felsteel Executioners can get the job done, though not as consistently as Shaman or Mage.

Miracle Rogue in Wailing Caverns is Thanos’ favorite Hearthstone deck. Perfectly balanced, with most matchups looking close to 50-50. There are some struggles with Rush Warrior, the Priest matchup isn’t great (and feels worse), but every game is winnable. It’s also a fairly skill-testing deck that requires a flexible playstyle.

The Robin Priesthood of Hearthstone, Spell Mage’s rise at higher levels of play has helped keep Anduin under control, but Mage players aren’t really being rewarded for their efforts with stronger win rates, and they’re not making any friends either. It’s a thankless job, with Incanter’s Flow remaining a point of frustration that sticks out like a sore thumb.

But if Priest has to die, then someone has to make it happen…

This week’s main story for Hunter was the rise of Yogg & Load Deathrattle Hunter, and much hype has been built up following its appearance. This hype has no merit because this deck sucks pretty badly. We’re not even giving you a deck code. You’re gonna play Face Hunter and you’re gonna like it.

An excellent deck throughout ladder, Rush Warrior’s presence has shrunk at higher levels of play due to Priest’s rise. This is not an indication of a big fall in the deck’s standing against the field. Warrior is still strong, but you have to accept your unfavorability against the most hated deck in the format. For many top-level players, this is clearly not acceptable.

The class will look forward to the new expansion, with hopes of seeing strong cards for Control Warrior, as this archetype has struggled to make an impact throughout Barrens.

Paladin has managed to overcome severe nerfs and make a return to a reasonable win rate range thanks to developments in Libram Paladin we’ve discussed last week. Of course, a heavily nerfed class that many players grew tired of when it was at its peak is unlikely to rise back in its presence, as there are better options available. The good news is that Paladin isn’t far away from being seriously competitive again. There is no gaping hole that an expansion set cannot fix. Hopefully, the class will be easier to balance in Stormwind (?).

When it comes to Wailing Caverns, Shaman has gone through the biggest change. From a class that was completely dead, it’s now a pillar of the format and the best answer to one of the most hated decks we’ve ever seen in Control Priest.

Elemental Shaman turned from a directionless archetype into one possessing great flexibility. The Whack variant is superb throughout ladder and will perform very consistently. The Doom variant shines brightest at top legend due to its effectiveness against Priest.

One hour after this report is out, the next expansion will be announced. We’re looking forward to seeing what’s coming next.