Welcome to the 225th edition of the Data Reaper Report!

A Wild Data Reaper Report is scheduled to release this Sunday, March 20th! 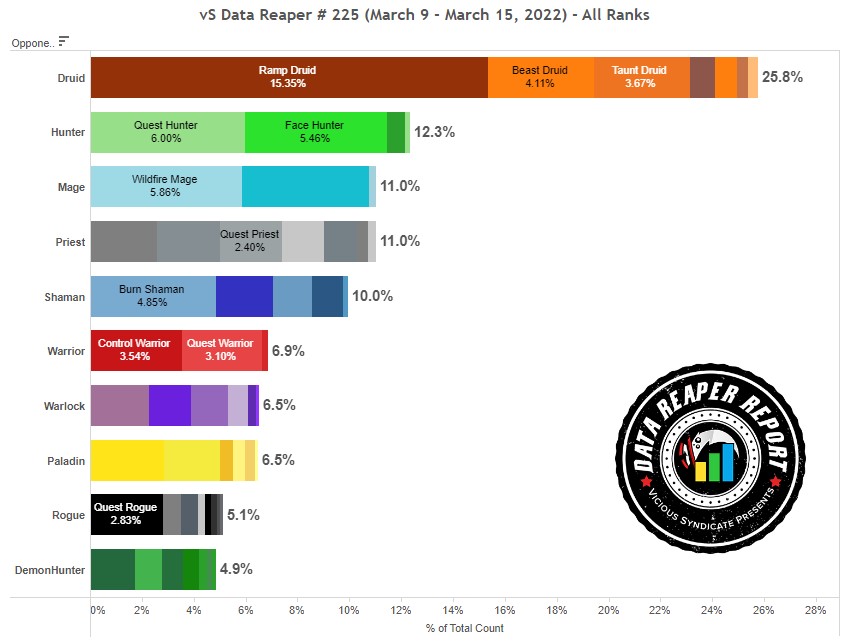 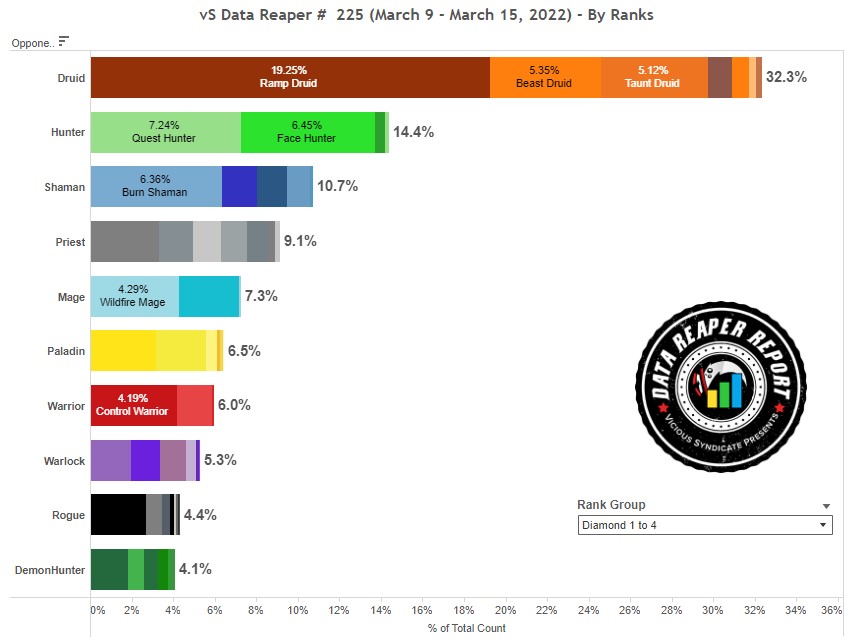 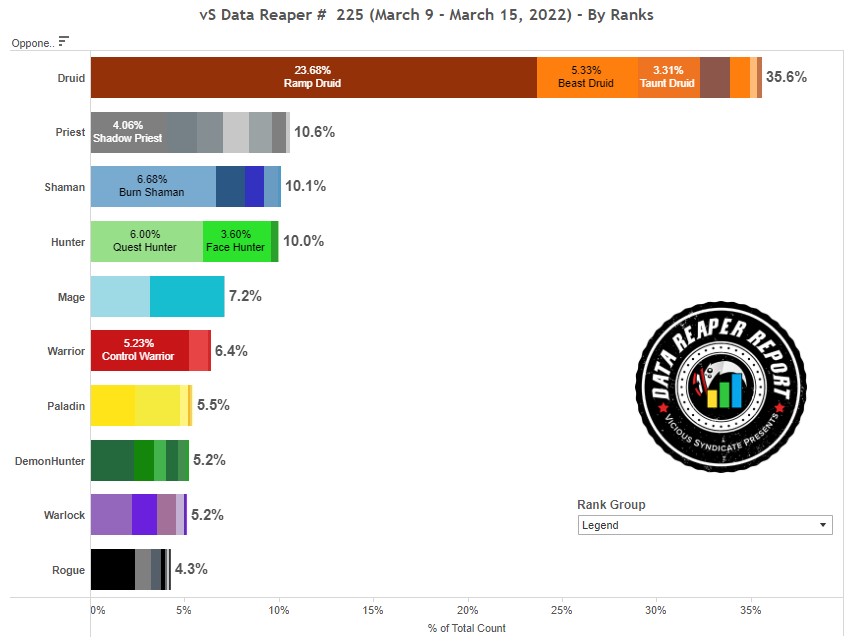 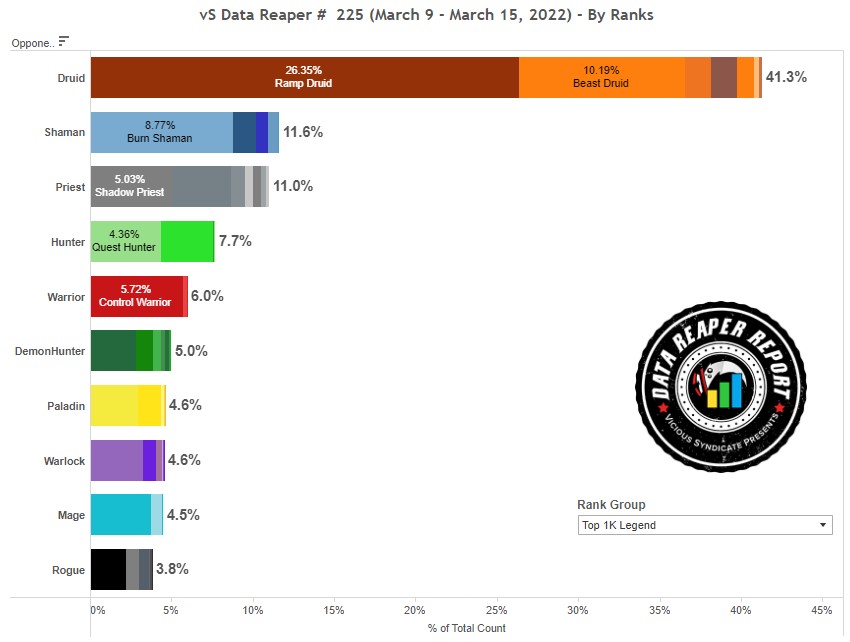 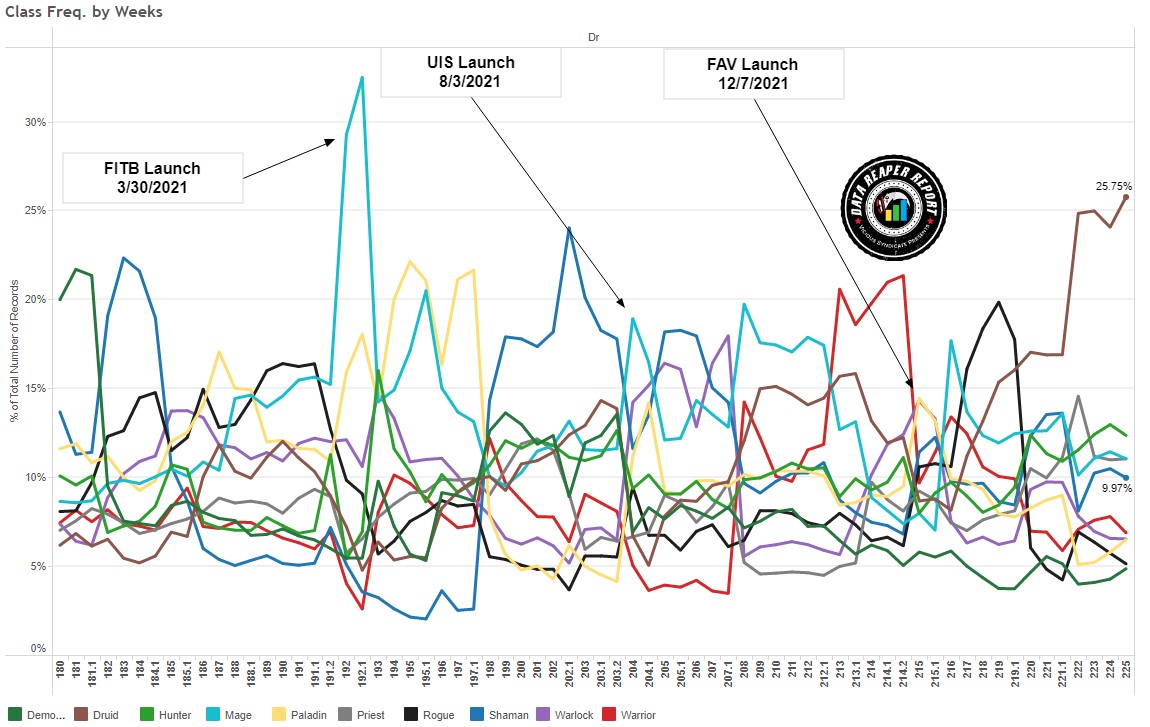 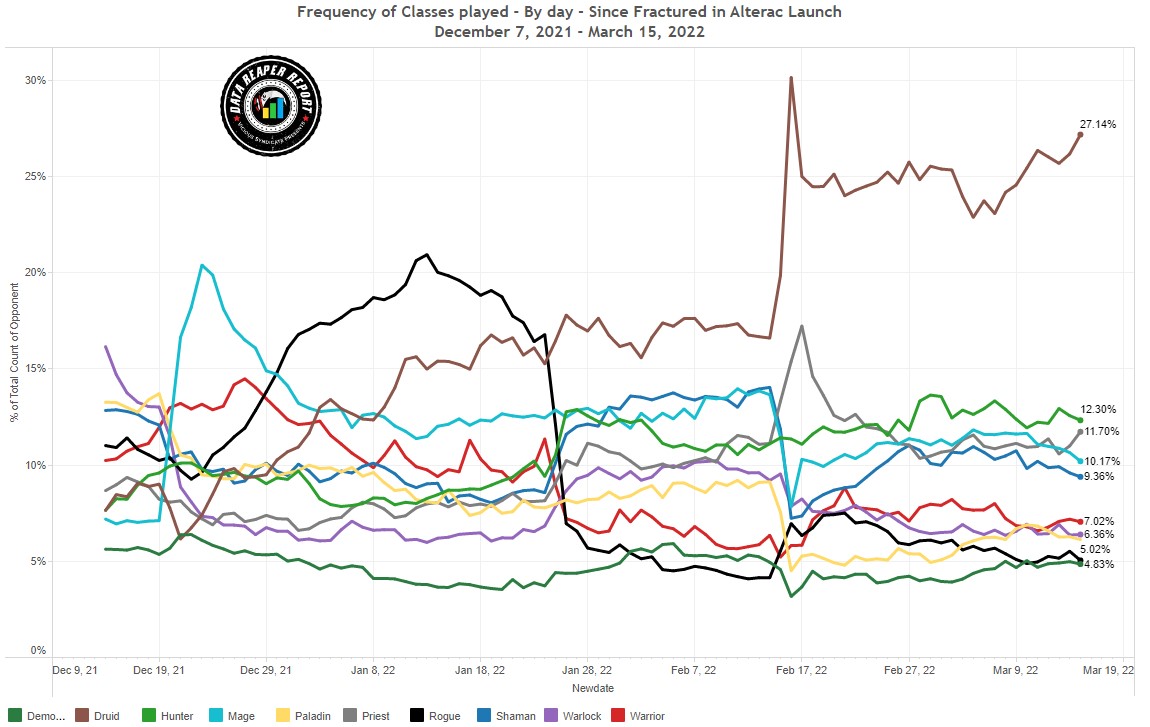 With an expansion that is just about to be announced shortly after this report is released, we’ve kept this piece short as there isn’t too much stuff to discuss. We will note that there are some novel archetypes seeing experimentation out of sheer boredom of the player base, and we’ve even spotted some competitive stuff worth looking at in the class sections.

Druid just keeps getting more popular. Ramp Druid has risen in play and Beast Druid has spiked in play, becoming the 2nd most popular deck at top legend with a 10% play rate. Beast Druid’s rise correlates with the introduction of a new card to its build.

The meta is pretty much locked in place, with some small developments here and there. Most classes have either stagnated or declined, with Warrior showing the biggest fall and Paladin displaying some signs of ‘awakening’. 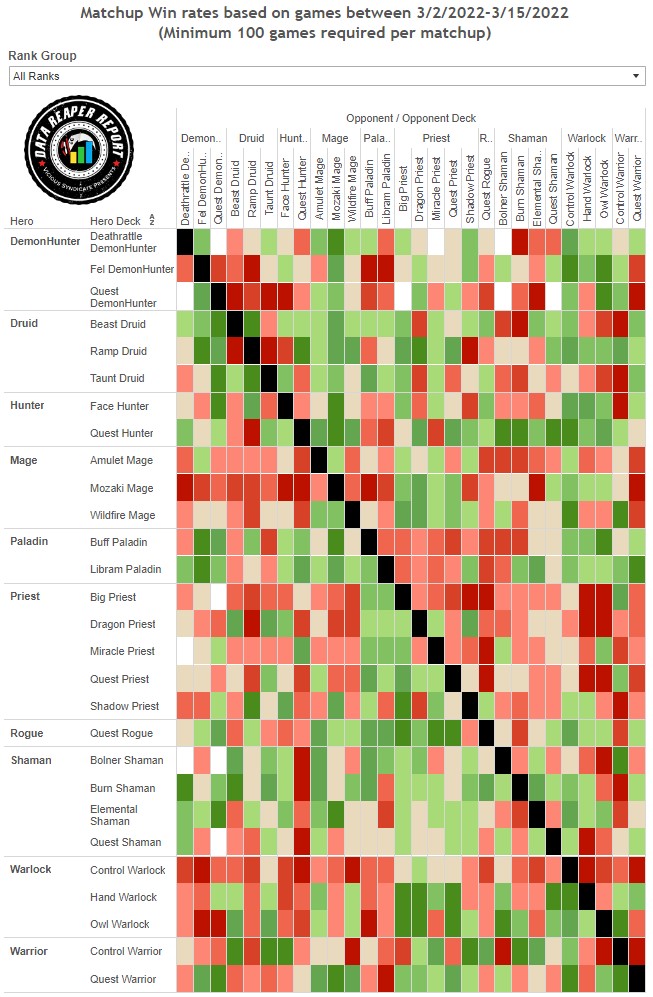 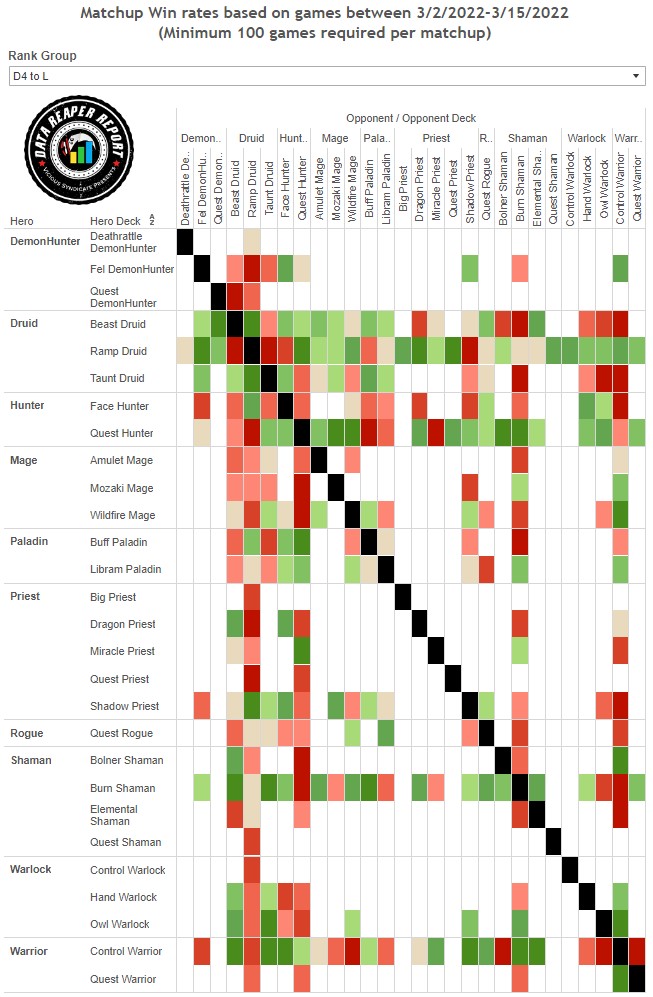 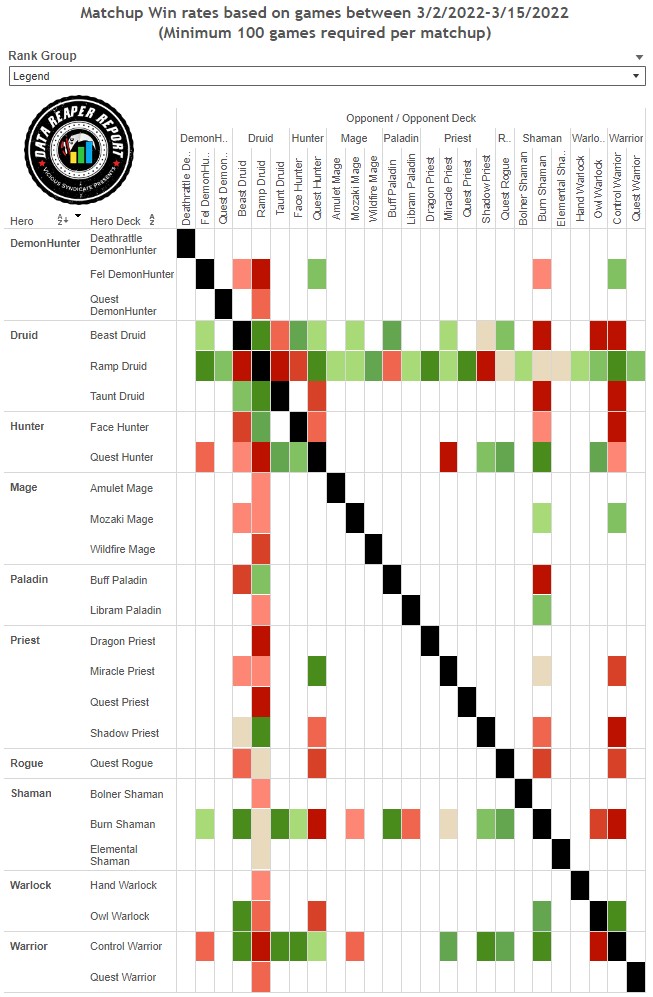 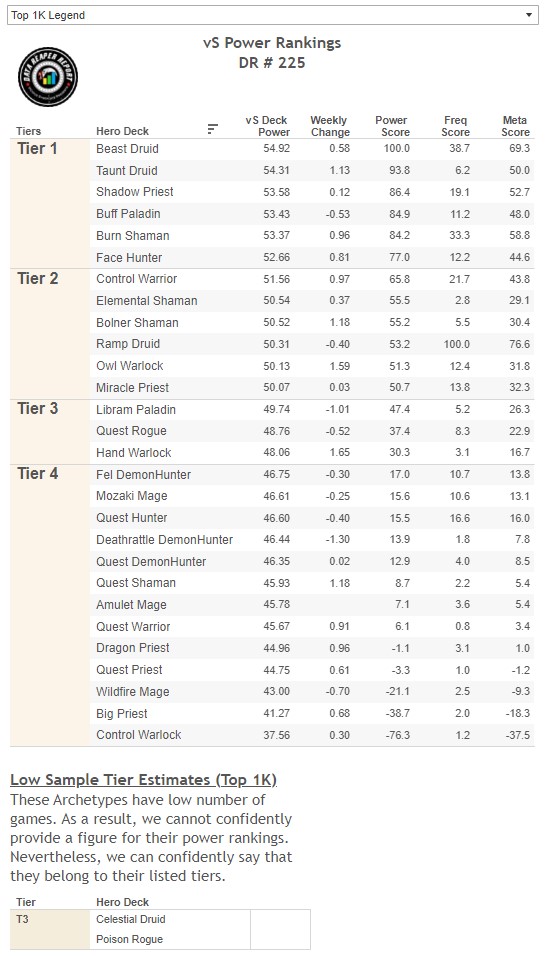 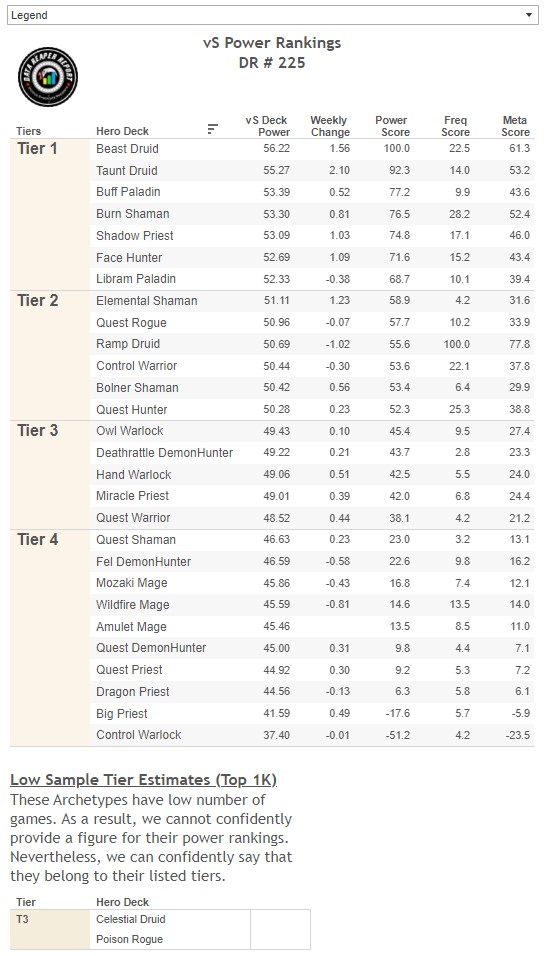 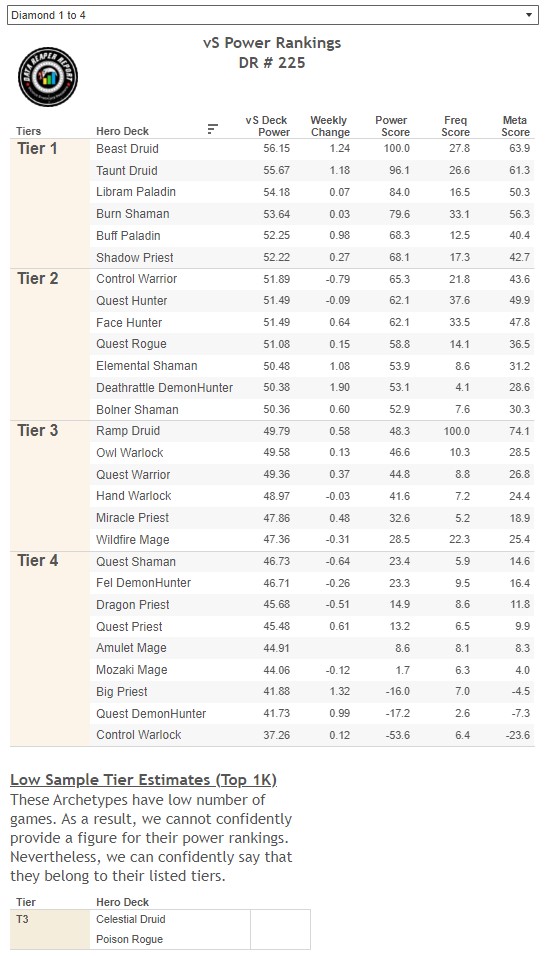 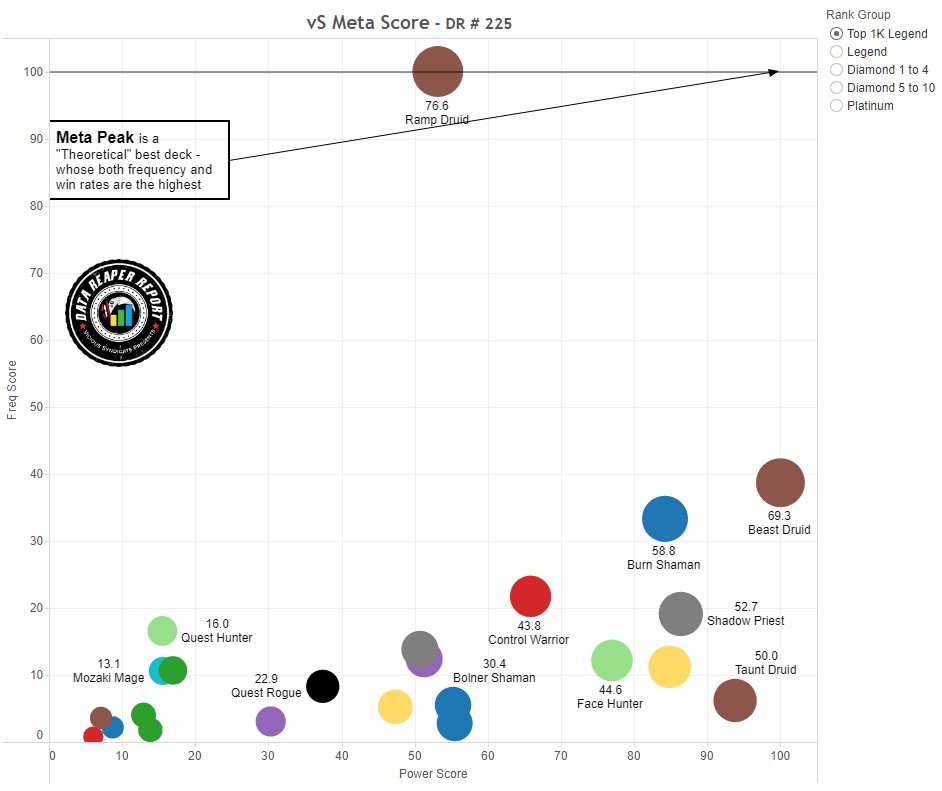 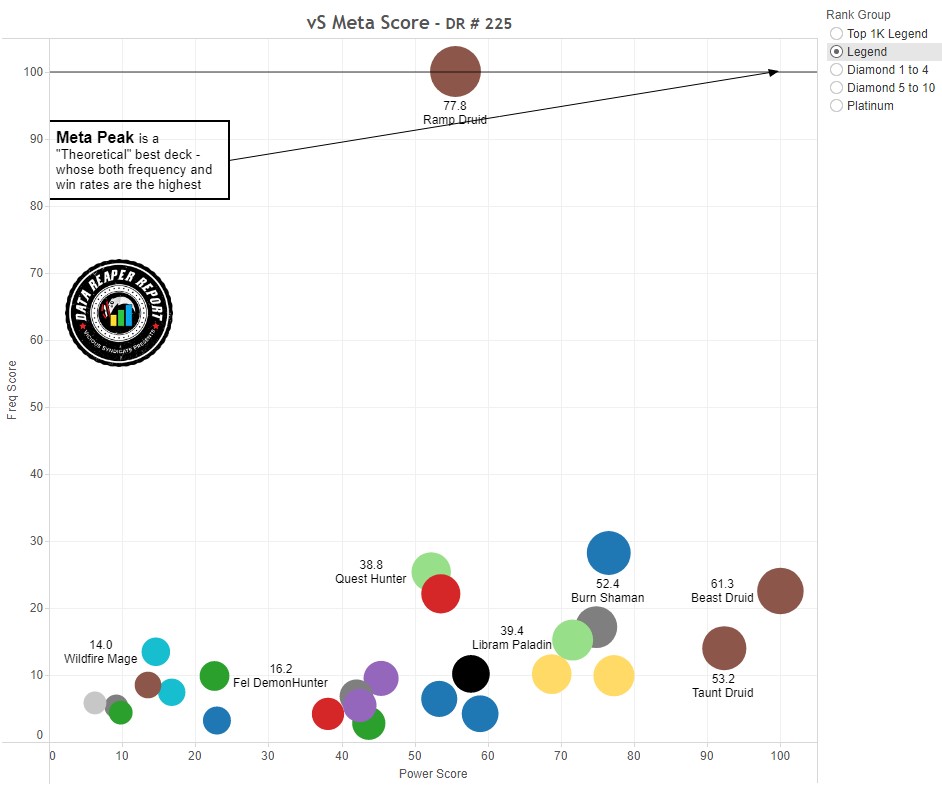 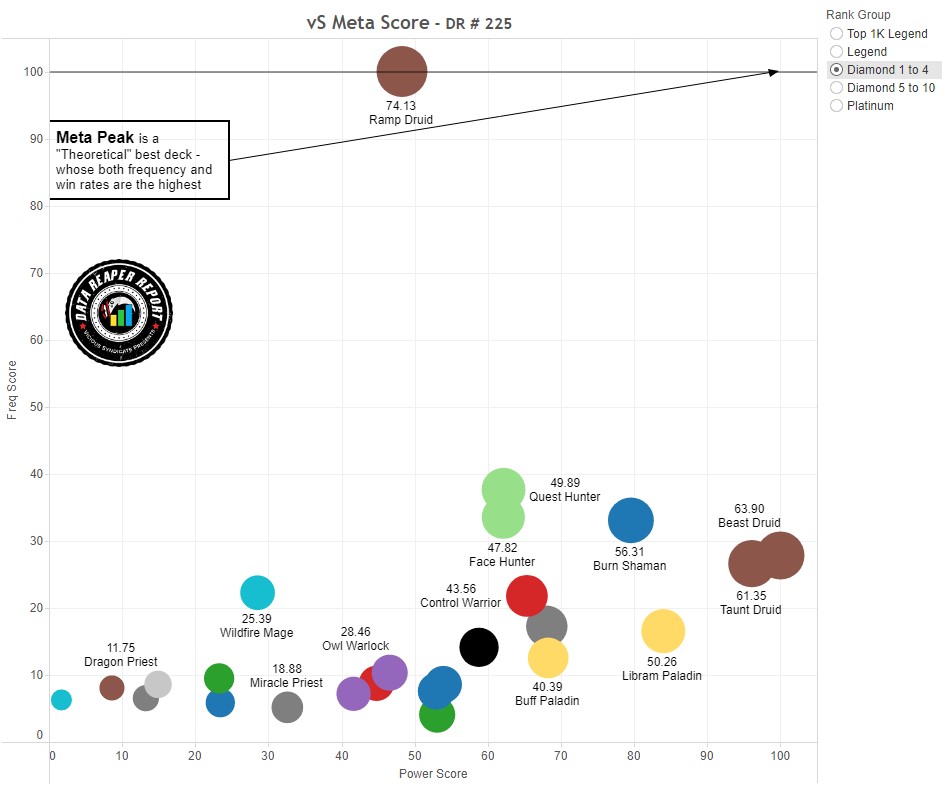 Beast Druid has started running Pride’s Fury alongside Power of the Wild. Pride’s Fury isn’t that strong in the average matchup on ladder, but what sells us on the card is that it makes the Druid more resilient to board clears. It helps establish boards outside of removal breakpoints that are common in Warrior, Warlock, and Shaman. Those are Beast Druid’s worst matchups, so running the new build is not only correct, but feels better too.

Prestor Druid has gotten a bit of hype recently, but results don’t seem to back it up. It’s a fun, Tier 4 deck that can provide you with some entertainment while we wait for the new expansion.

Shaman’s in a decent position in the meta. Burn Shaman is one of the best decks in the game, while Bolner and Elemental Shaman aren’t too bad either.

Miracle Priest is seeing further adjustments with the goal to do its best in the Ramp Druid matchup. The Goose variant is now running more of Horn of Wrathion to further increase the consistency in which Bloodweaver can go off early. The Rally build is playing Raise Dead to make it even more difficult to deplete it of resources.

Hunter hasn’t changed much this week. The Rhino build continues to be the superior choice in Face Hunter. The Multicaster and Drek’Thar builds look like the best options for Quest Hunter.

We’re liking Beaststalker Tavish and Spring the Trap alongside double Explosive Trap for the Drek’Thar variant. Some players have started experimenting with Mini-Mage. This isn’t as crazy as it looks, though we’re not sure it’s an upgrade over Slate. The other card you’d make way for the Mini-Mages is either Tavish or Spring.

No major developments in Control Warrior. There’s some noise of the Galvangar build making a return, but the Kazakusan build is clearly stronger on ladder.

Lady Prestor in Druid? How about Lady Prestor in Demon Hunter? A new Aggro Demon Hunter build, originally popularized by FunkiMonki, is showing quite a bit of promise by running Lorekeeper Polkelt and a top end of Prestor, Skull of Gul’dan and Kurtrus. Unlike the meme-worthy performance of the Druid deck, Demon Hunter’s Prestor venture looks competitive and might be as strong as Tier 2!

N’Zoth Secret Paladin is attempting a comeback and we’ve curated a build for it. The deck shows competitive promise, though it might have trouble justifying its existence over the stronger Buff Paladin.

Owl Warlock looks a little better thanks to the rise of Beast Druid. Handlock is still struggling. Curse of Agony looks like major bait material, as can be seen in Control Warlock’s win rate.

A Balinda Drakefire Amulet Mage has appeared on ladder. It looks like a bit of a meme, but since we’re so bored waiting for the new expansion, might as well clean it up a bit. Animated Broomstick is an important comeback card since we don’t have removal. We don’t have data on Grey Sage Parrot in this archetype, but it would require you to drop Taelan and find Balinda (the best card in the deck) less consistently. A turn 6 Balinda is how this deck likes to win.

Rogue is a class that seems desperate for a new format, but it also happens to lose a lot of extremely influential cards to rotation. It will be interesting to see how it fares in April, as a weak expansion set could doom it to the bottom of the meta.

New expansion. New core set. Rotation. Listen to our next podcast as we will be discussing all these things once they’re announced. Expansion season is nearby.

For now, farm Ramp Druid with Beast Druid and maybe sneak wins against your counter matchups thanks to Pride’s Fury. This is currently the strongest thing to do.