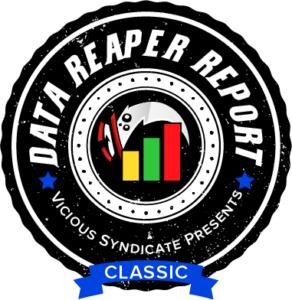 Welcome to the 2nd edition of the Classic Data Reaper Report! 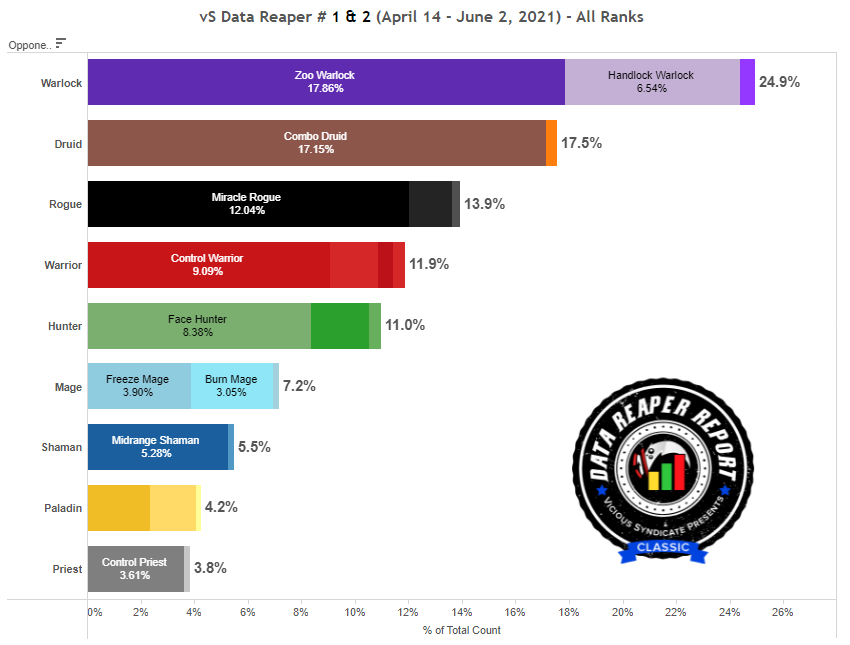 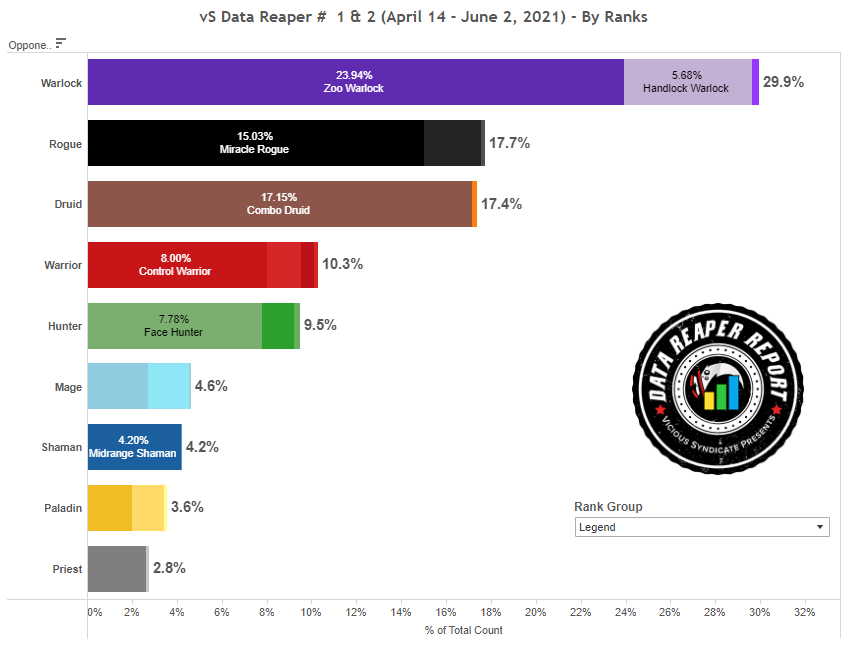 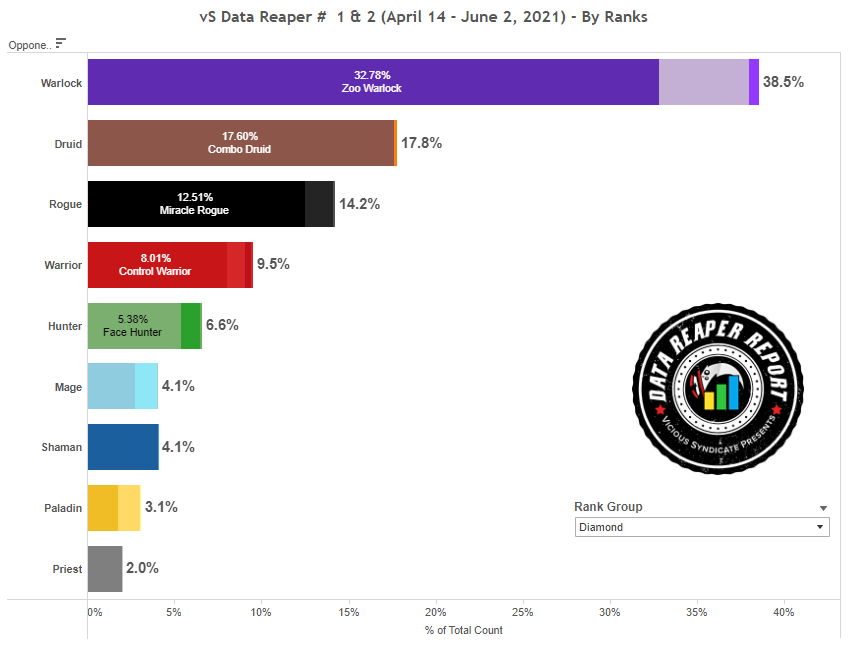 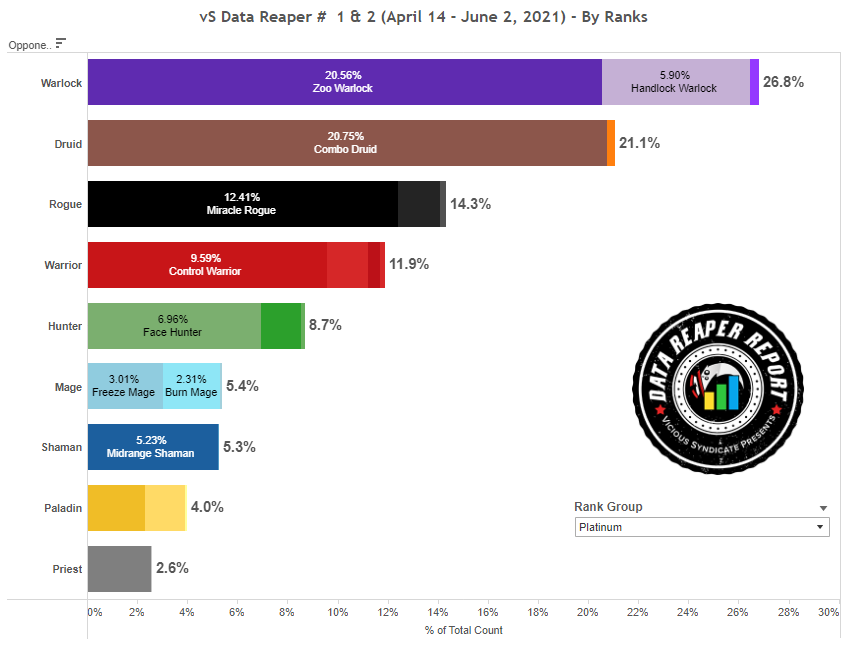 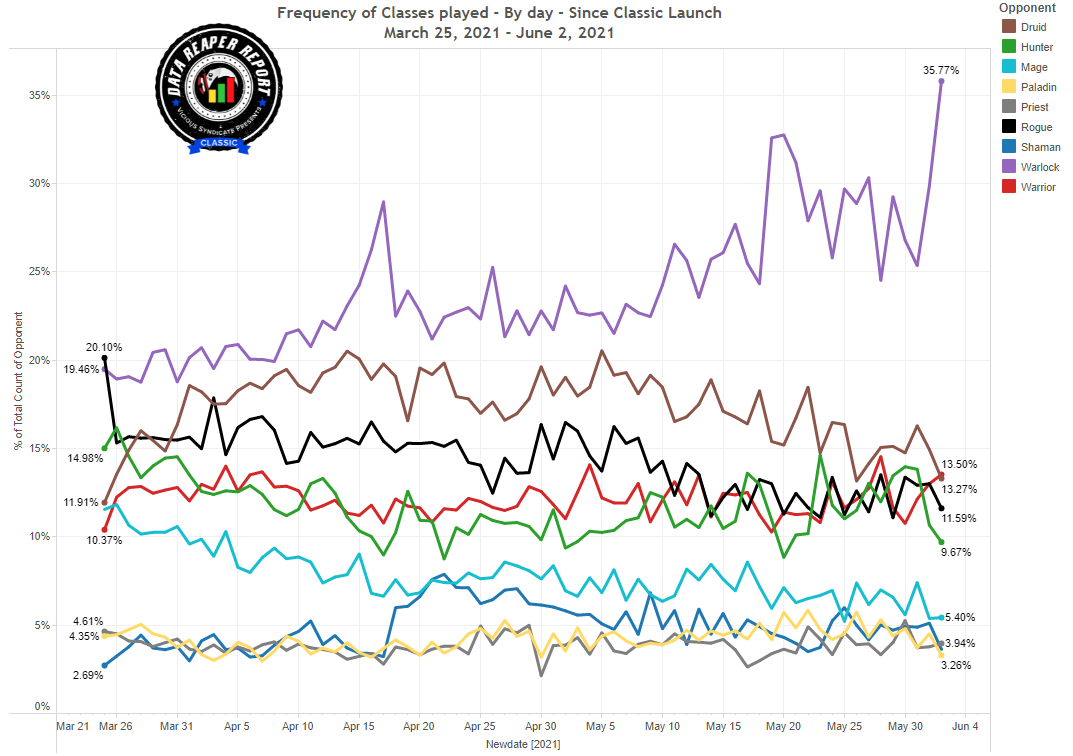 As players continue to climb through Classic ladder, the field is changing. Zoo Warlock has seen a massive rise in play, and is absurdly popular at Diamond, where it eclipses a 30% play rate! A combination of its good performance in the last report, fast games and cheap cost are likely the main reasons why it has become so prevalent in a grindy format. Handlock has slightly declined in comparison.

Combo Druid’s decline is in perfect correlation with Zoo Warlock’s rise. We’ve seen in the first report that Zoo looked like one of the only reliable answers to Druid, and its increase in popularity seems to dissuade players from piloting the force of nature. Of course, this doesn’t stop Combo Druid from remaining one of the three most popular decks in the format.

It’s interesting to note that the best deck in the format according to our first report has not seen a rise in play. In fact, Miracle Rogue took a small step back in play rate. Its numbers peak at legend, which makes sense considering how skill-testing it seemed to be according to its matchup spread. Aggro Rogue remains very niche.

Control Warrior’s good performance has kept it very relevant as one of the more popular decks in the format. Its play rate is very stable throughout ladder, with players at different rank brackets recognizing it as a strong ladder choice.

Face Hunter’s play pattern is resembling what we saw from it in the first report. Popular at lower ranks and declines as you climb ladder, though it’s still surprisingly common at higher levels of play considering its disappointing performance. Perhaps, much like Zoo Warlock, players find added value in Face Hunter’s fast games during the grind to legend as well as its cheap cost. Not much of Sunshine Hunter can be found beyond Silver.

Shaman initially jumped in play following the first Classic Report due to its surprisingly great results. However, the class hasn’t truly taken off and is in the process of declining once again. Perhaps, this has to do with the extreme spike in Zoo Warlock, a matchup that has likely made things more difficult for Shamans on ladder. We decided to stick with the “Midrange Shaman” name due to its historical value though the archetype remains quite diverse in its builds, including the more aggressive variant we’ve previously discussed. There’s a bit too much overlap for us to do any reliable separation.

Mage is slowly declining, with both Freeze and Burn Mage not seeing much play at higher rank brackets. Not a surprising outcome considering their performance against the field.

Paladin and Priest remain very fringe. We don’t have much hope for either Control Priest or Control Paladin, though Shockadin did look playable in the first report. 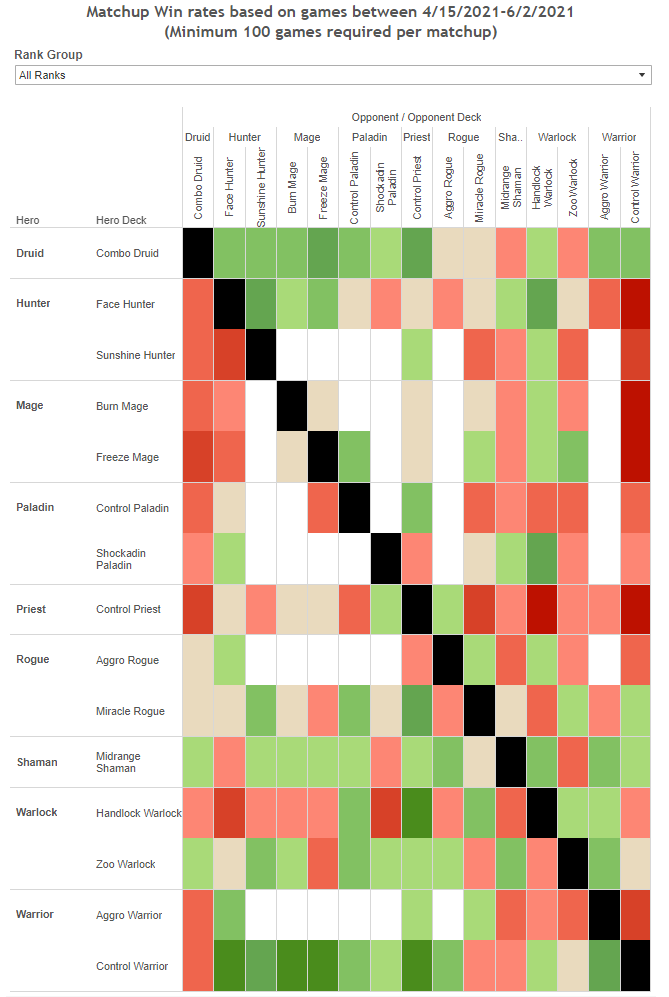 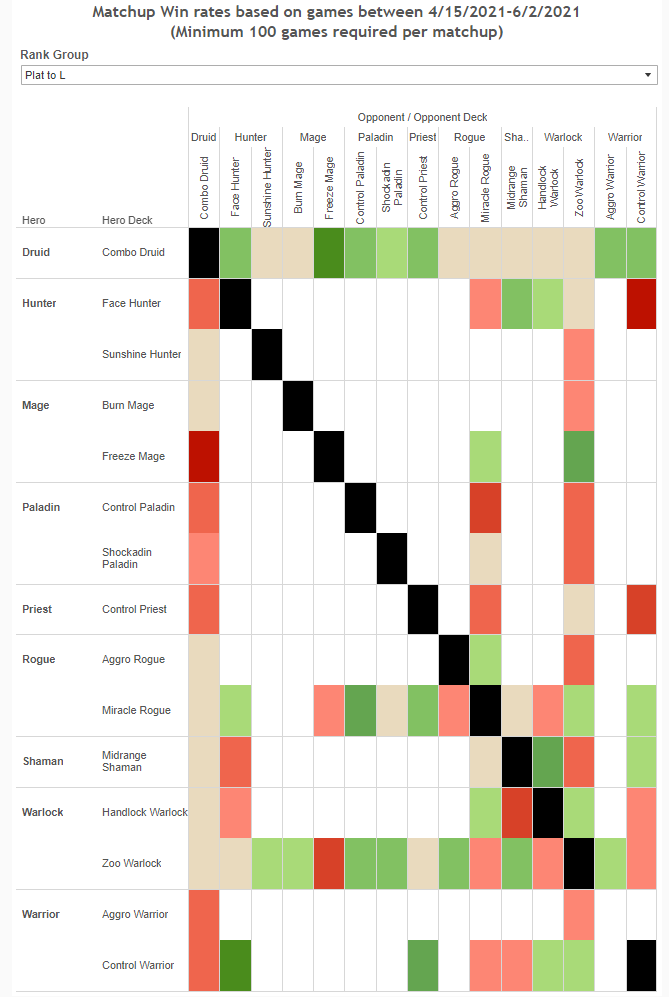 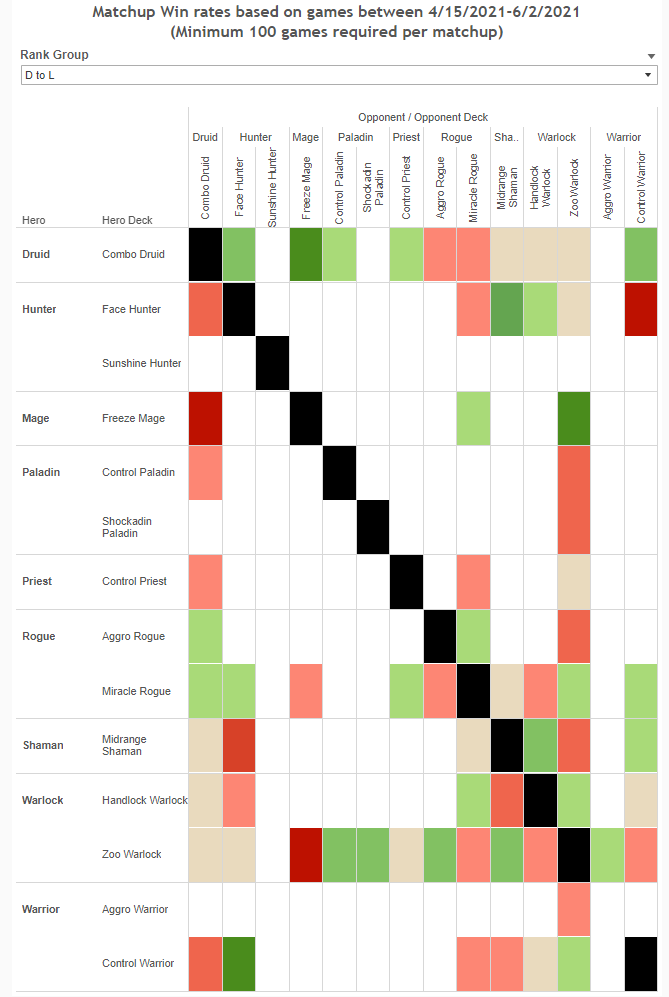 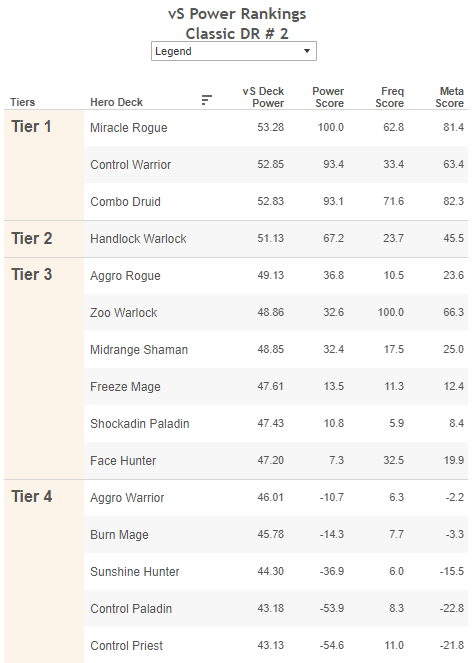 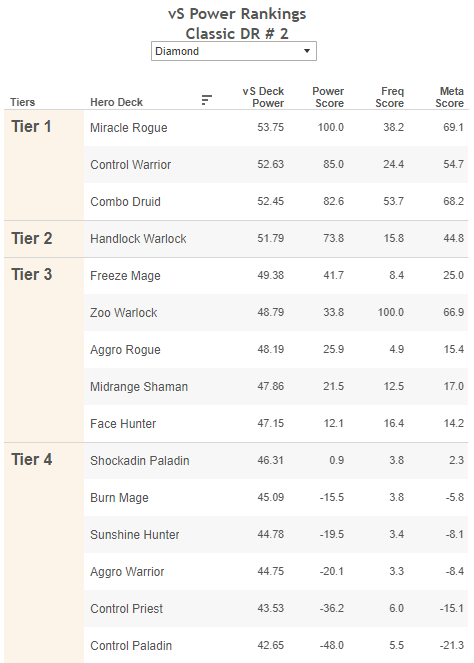 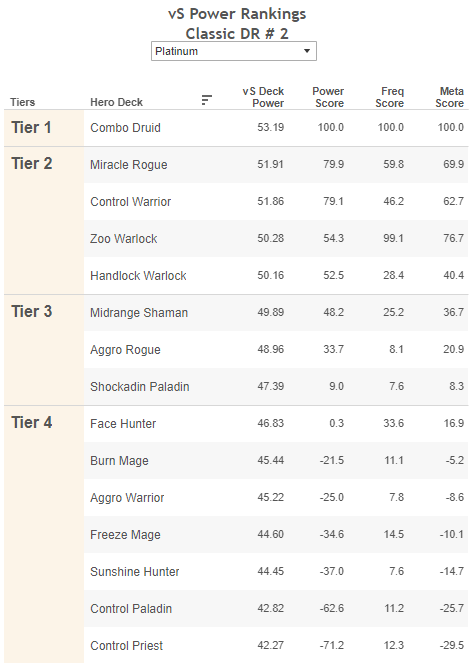 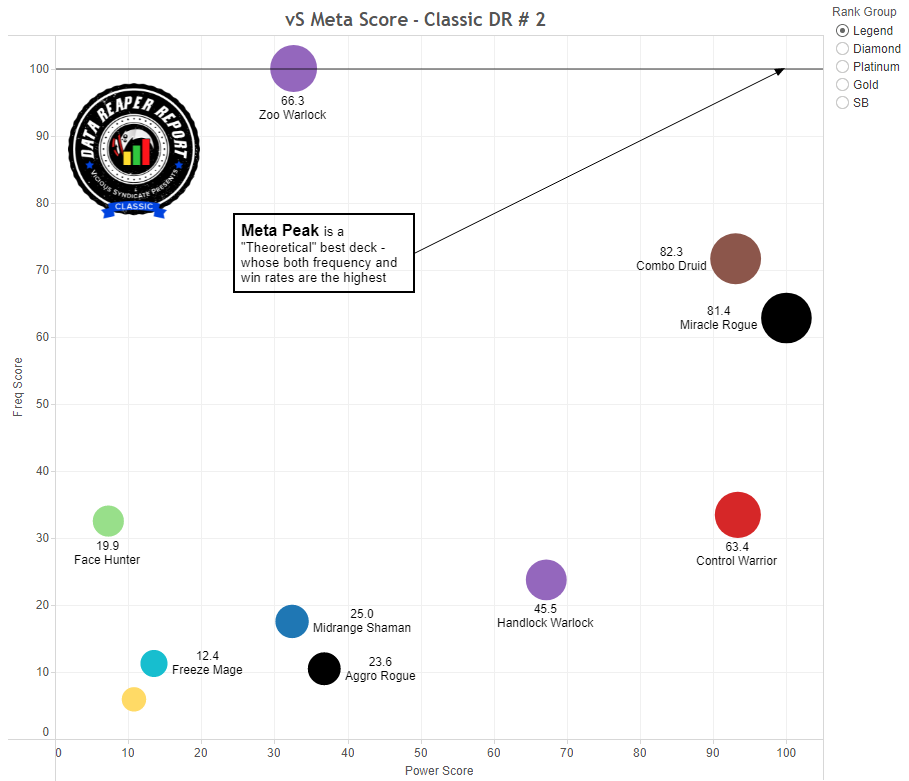 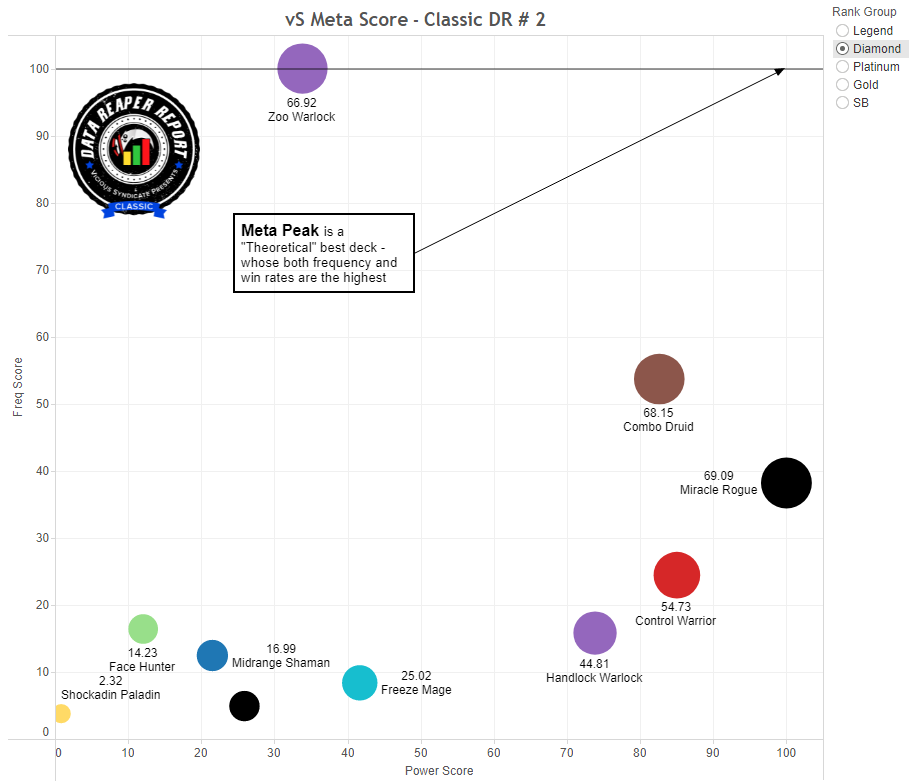 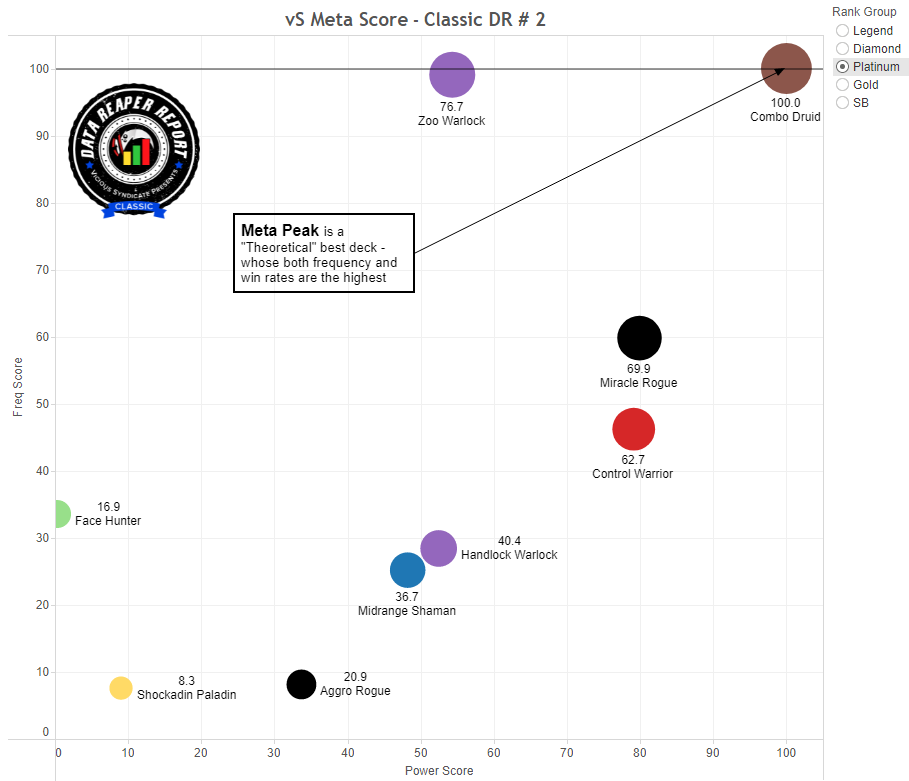 As the most popular deck in the format, Zoo Warlock is suffering from increased meta hostility that has dragged down its performance compared to the first report. Its best build is the same as the one we’ve featured before, excluding Leeroy and situational cards, with one change swapping Dark Iron Dwarf for Amani Berserker. Berserker offers a standalone 2-drop that represents a threat.

While the meta has become hostile to Zoo, Handlock is meeting a more favorable field. After looking into this database, it seems that the best approach for the archetype is to go for the Leeroy combo, with full redundancy through double Faceless and double Power Overwhelming. Jaraxxus is irrelevant in most matchups.

Combo Druid is a top-tier deck with an excellent matchup spread, and it’s gained percentages against Zoo Warlock, a common nemesis. The key is to build the deck defensively, with many tips we’ve already given you in the first report. Running Sen’jin Shieldmasta alongside Chillwind Yeti is great for Wild Growth consistency. Ancient of War is amazing against the most popular decks in the format (Mirror, Zoo, and Miracle Rogue).

The final slots go to the generically useful Earthen Ring Farseer (best in most matchups), though it could be swapped for two other tech cards. Mind Control Tech is a brutally effective answer to Zoo Warlocks and Shamans, while Big Game Hunter is strong against Handlock and Warrior. The best choice depends on what you meet, so consider these options.

We don’t think anyone can take Miracle Rogue’s throne in Classic. While there are ways to make things more difficult for the deck, Miracle Rogue is superbly positioned in the current field and handles the horde of Zoo Warlocks and Combo Druids very effectively. We made one change to the build, which is swapping out the 2nd Shiv for the 2nd Farseer to help stabilize in aggressive matchups, since the mirror isn’t as common as we expected it to become. The option is there to add a 2nd Sap, but the card isn’t that great right now. Perhaps, it becomes correct if Druids take our advice regarding Ancient of War, and/or Warlock gravitates to Handlock rather than Zoo.

If the meta were entirely focused on playing the best decks, Control Warrior would not look as strong as it is. Thankfully for the archetype, many players still flock to Zoo Warlock and Face Hunter to shorten the grind, and Warrior heavily punishes this trend.

The featured build for the archetype, which we’ve refined in the first report, looks perfect. In a format without rush minions, strong removal, or great comeback mechanics, you don’t want to pass turns. Board development is very important, which is why the deck wants a strong mid-game with proactive plays at every mana slot.

In Standard, underperforming aggressive decks have no chance of seeing much play. In classic, though, Face Hunter still appeals to many. Not much has changed in how to best utilize the archetype, and the first report details the reasons we’ve settled on the featured build. Explosive Trap alongside a strong early game curve has become even more important following the rise of Zoo. Misdirection is huge against Miracle Rogue. Buzzard is bait.

Shaman is suffering from the format’s fixation on aggression. The class would be far better positioned if Zoo Warlock and Face Hunter weren’t so weirdly prevalent, as it has a good standing against the top-performing decks.

The Aggro Burn Shaman looks like a successful experiment, as its performance is very promising following its propagation on ladder. We wouldn’t change a card here.

If you want to take things slower though, you’re going to have to play more defensively. Running burst is hard to justify since you might as well run the aggressive variant, and it punishes you in the faster matchups. A Midrange Shaman build wants to run many taunts to stretch Zoo Warlock’s resources as much as possible before blowing up their boards with a Lightning Storm.

Mage is barely playable. There will be some moments on ladder when Freeze Mage encounters a favorable field and is able to thrive, but they’re often masked by a few oppressive matchups that make you want to delete the deck and move on.

Paladin is in a similar position in which, it has one deck that looks barely playable in Shockadin, but even on its best day it isn’t great.

Priest has no redeeming qualities. A Control Priest running Prophet Velen and Mind Blasts puts on a brave fight but is doomed to be stuck in Tier 4.

Whether the meta starts to seriously gravitate towards the best performing decks rather than the fastest remains to be seen, but in any scenario, Miracle Rogue should remain the strongest in the field. If you learn how to master Miracle Rogue, you will master the format.