The Boomsday Project has ushered in a meta that is quite similar to the Witchwood meta after the balance changes. This meta is relatively balanced in terms of power levels. No deck seems to be too powerful, and both ladder and tournament formats are filled with different and diverse strategies. The meta is so “healthy” that Team 5 have decided to skip balance changes this expansion, as they were deemed to be unnecessary.

And yet, despite the current state of the Hearthstone meta, many players don’t find Boomsday to be enjoyable. We can see signs of possible loss of interest through different metrics (Streamers Viewership, Google Trends search patterns, and games tracked in Data Reaper), though we cannot claim with 100% certainty that there is a decline in the player population.

So, what’s wrong? Obviously, there are issues close to the community’s heart that have been neglected, the primary one being the lack of new features to freshen up the game. We’re not here to discuss that. We’re here because despite looking healthy on the surface, the meta does have a glaring problem that cannot be fully grasped by deck win rates and play rates alone.

You may have heard common complaints about matchups feeling too polarizing in the current meta, and the sense of hopelessness when queuing into the wrong opponent. The Rock/Paper/Scissors sentiment was brought up numerous times throughout Hearthstone’s history, but does Boomsday truly stand out from other meta’s?

To answer this question, we develop a metric to measure meta polarity. Our goal is to create a metric that accomplished two things:

1. Provided numbers that could be easily compared across different metagames.

2. Was simple enough to understand and immediately apply context to.

Let’s say we have a 60-40 matchup between deck A and deck B. The matchup differential between these decks is 20%. To obtain an aggregate measure, we compute the matchup differentials of every matchup in any given meta and then calculate the weighted average of their absolute values based on the popularity of each matchup. This is the Meta Polarity. A meta polarity of 16%, for example, means that the average matchup in the meta is 58-42.

We also calculated an alternative measure of Meta Polarity, by taking the square roots of the matchup differentials before averaging them out. This method leads to nearly identical conclusions compared to the first method. Throughout this article we report results based on the first method, since it’s simpler to understand and apply, even though statistical pedants may prefer the second.

We examined every metagame since the Data Reaper launched and calculated the Meta Polarity for each significant period, taking both expansions and balance changes into account.

These are the results for legend ranks, where the meta is closest to being optimized. Differences across rank brackets are marginal. 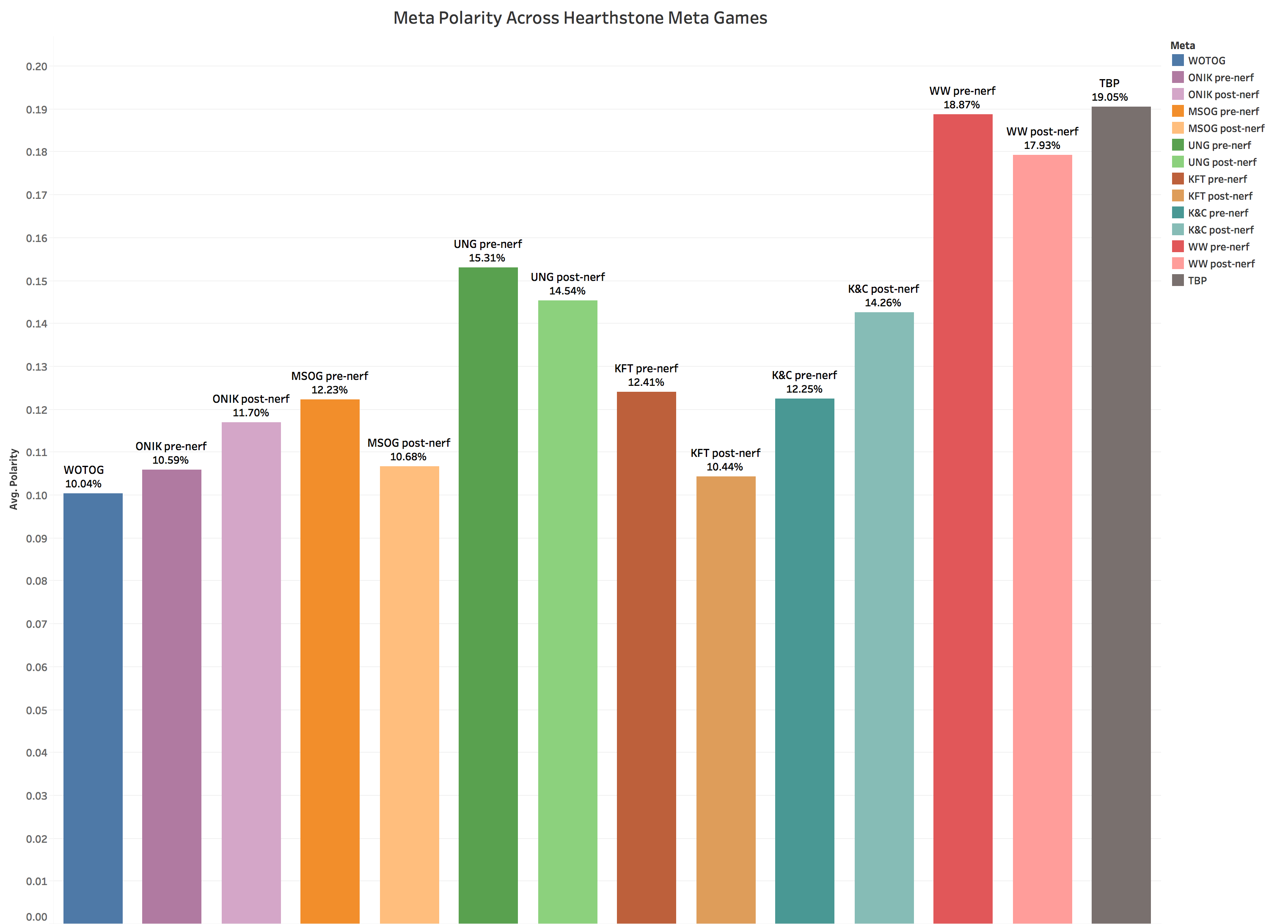 Whispers of the Old Gods had a Meta Polarity of 10%, meaning the average matchup in that meta was 55-45. As new expansions were released, the Meta Polarity value rose until the balance changes of Mean Streets of Gadgetzan that saw notable nerfs to Small-Time Buccaneer and Spirit Claws.

During Un’Goro, Meta Polarity jumped to an unprecedented level at 15%. Un’Goro was notorious amongst the player base to be polarizing due to the dominance of Quest Rogue and Freeze Mage, but balance changes that rid the meta of Quest Rogue did little to change things, as Jade Druid rose in popularity instead.

KFT saw a reduction in Meta Polarity as Druid, Rogue and Priest established themselves as the top 3 classes after the balance changes. All had well-rounded decks with fairly balanced matchup spreads (especially Tempo Rogue and Raza Priest). The balance changes in K&C saw an end to the reign of Raza Priest and Tempo Rogue, and an escalation in Meta Polarity.

And then came the Year of the Raven with the Witchwood expansion, and Meta Polarity skyrocketed to a new record. Oh… Remember Quest Rogue? That’s when it came back. However, it’s easy to blame Quest Rogue for the Meta Polarity, but it’s clearly not the only deck at fault. Even when looking at the meta after the balance changes, when Quest Rogue disappeared again, Meta Polarity was still higher than in any period before Witchwood.

Fast forward to today, when during Boomsday meta polarity hit yet another record, making Boomsday the most polarizing meta in the history of the game. In a three year period, we’ve gone from an average matchup of 55-45, to the average matchup measuring at almost 60-40.

You haven’t been imagining things: the game has become the most polarizing it’s ever been.

So which decks are “at fault”? To answer this question, we’ve calculated the Deck Polarity values, which are the weighted averages of each deck’s matchups based on their popularity. We will show you three snapshots of the meta at legend towards the end of key meta periods. Remember that a deck’s polarity is influenced by other decks in the meta, so polarizing decks tend to “snowball” polarity for everyone else too. We cannot directly compare a single deck’s polarity to another deck in a different meta as a result. We can only directly compare them to other decks in the same meta.

Let’s look at Whispers of the Old Gods, which was the least polarizing meta we’ve ever measured. 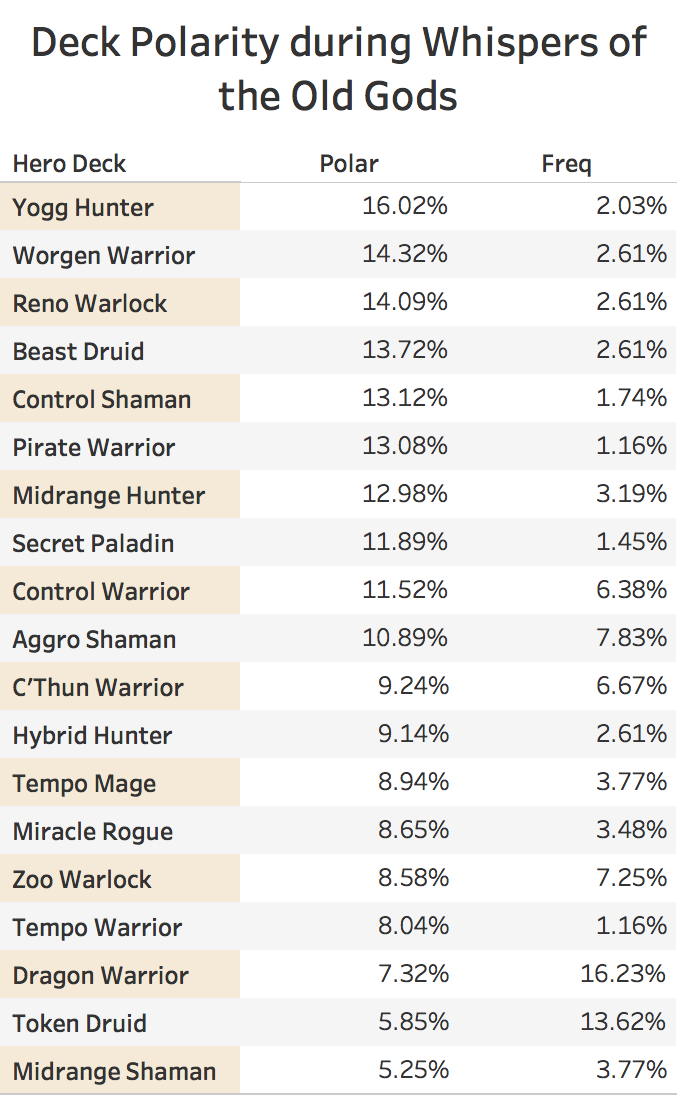 The two most dominant decks in the game, Dragon Warrior and Token Druid, are two of the least polarizing decks with values that are well below 10%. The most polarizing decks are relatively fringe in comparison, with Yogg Hunter topping the chart at 16%.

Let’s fast forward a year, to Un’Goro before the balance changes: 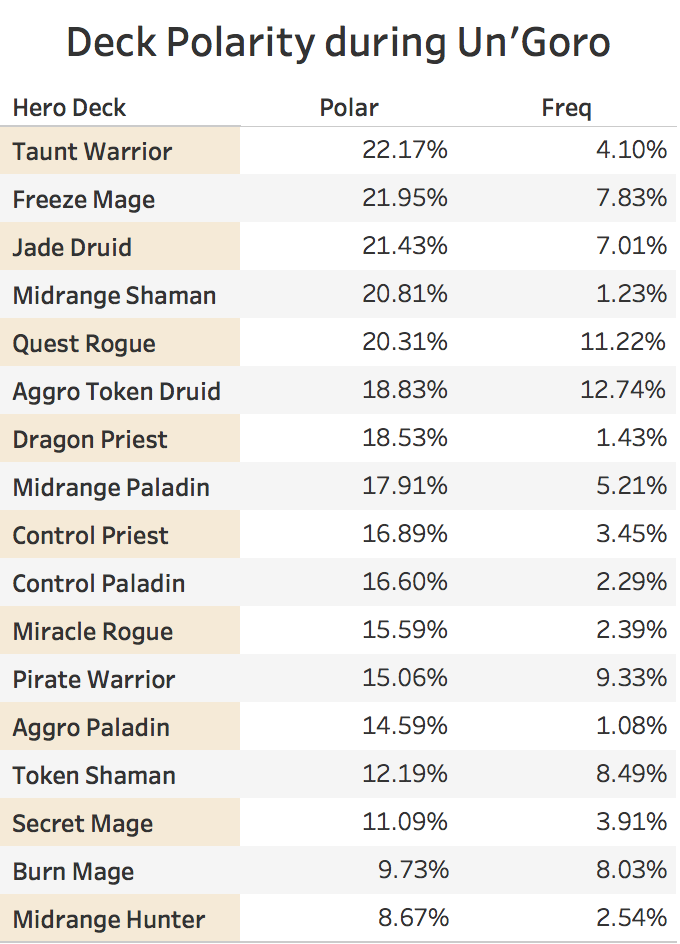 Things significantly escalate with the launch of this expansion as well as the yearly rotation. There are now multiple common meta decks with Polarity values of over 20%. Quest Rogue is one of them, but it’s surprisingly not as polarizing as you’d expect it to be, and there are other decks that are equally polarizing: Taunt Warrior, Jade Druid, Freeze Mage and Aggro-Token Druid. All of them carry high play rates and high Meta Polarity values.

Let’s fast forward another year, to another expansion and yearly rotation which blew up the Meta Polarity to new records: Witchwood. 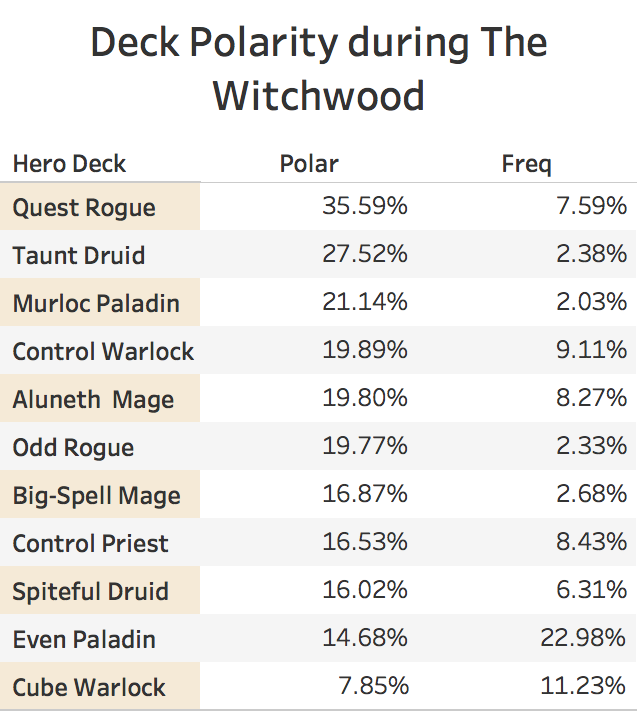 Quest Rogue made a huge comeback in Witchwood, but this is a different deck compared to its Un’Goro iteration. It has become so absurdly polarizing, unlike anything we’ve ever seen before. Remember that Witchwood Quest Rogue now had Sonya, Zola, Valeera the Hollow and Vicious Scalehide. The potential of infinite value and infinite healing made it even more ridiculous against late game strategies and more powerful overall.

But the list shows other decks that are also quite extreme. So much so that Witchwood was still the most polarizing meta to date despite its most popular decks, Cube Warlock and Even Paladin, being the two least polarizing relative to the field. Remember that even after the balance changes, Witchwood still carried an extremely high Meta Polarity value.

And let’s finish things off with Boomsday: 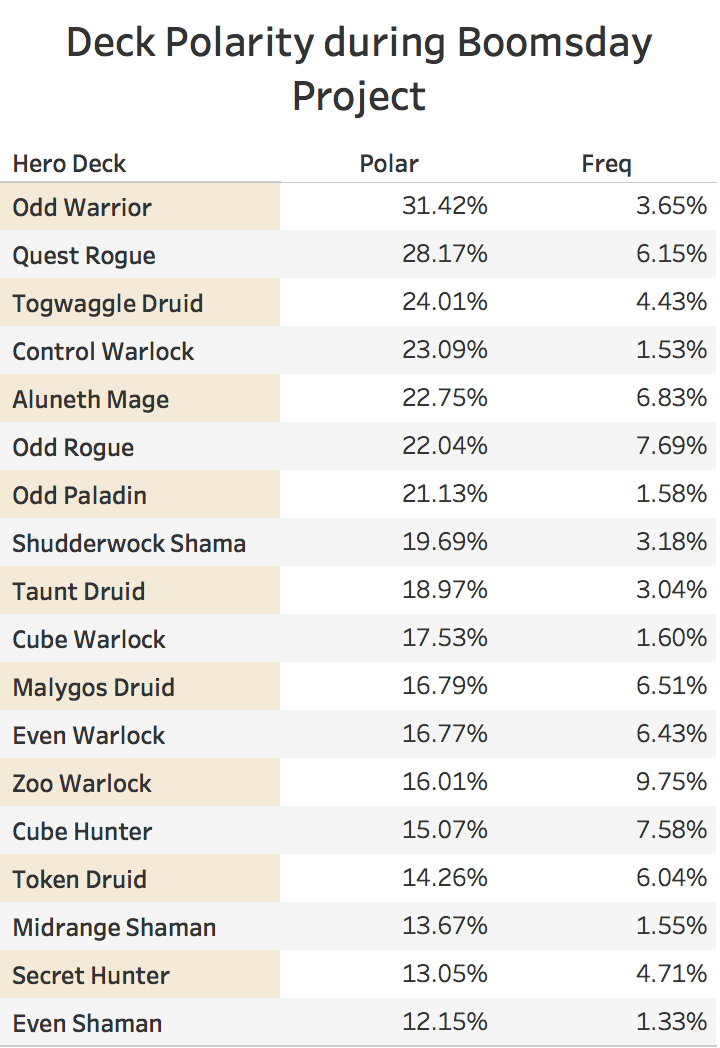 There’s a reason why we’ve said in the last Data Reaper Report that Quest Rogue and Odd Warrior are a design problem. Odd Warrior is an even more polarizing deck than Quest Rogue in the current meta, and both hover around the absurd value of 30%. A long list of decks carry polarity values of well over 20%, but there are relatively few decks that truly escape these heights and offer a stable experience. Playing Token Druid in the current meta will still feel more polarizing than playing almost any deck during Whispers of the Old Gods.

Rock/Paper/Scissors Hearthstone has never been worse, and we’re left with one final question:

How and why has this happened? We have a few areas to point the finger at, but considering the extreme jump we’ve observed in Witchwood, it’s clear that the biggest fault lies in the sets from the last year and a half, beginning in Journey to Un’Goro. All 4 sets before Boomsday introduced mechanics that enabled and greatly escalated the core issue behind polarization: lack of meaningful counterplay. When you think about it, it all makes sense.

There has not been a single quest deck that wasn’t extremely polarizing. Quest Rogue is most famous for it due to its dominance and prevalence in different periods despite being hit with multiple nerfs. However, Warrior/Mage/Druid/Priest all emerged with quest decks at different points in Hearthstone’s history and they were all extremely polarizing as well. The inevitability that some of these quests enabled often offered little counterplay beyond “killing them before they complete the quest”.

Death Knights were a massive power creep on late game cards, and many of them enabled the potential for infinite value. They simply outclassed and continue to outclass other late game cards to this day. The ability to produce infinite value or infinite damage is often one of the key contributors to polarization. It effectively eliminated resource management as an important avenue for counterplay.

How often have you lost the game to an Oakheart without being able to pretty much do anything meaningful about it? The mana cheating and stat cheating introduced in K&C led to the creation of some of the most busted interactions in the game, leading to many of these cards being nerfed. Some of them are still around and remain very impactful in decks that are very polarizing in nature.

We’ve already said in the past that both Genn and Baku introduce a more extreme and polarizing game experience. Genn enables consistent decks, but its hero power upgrade is tempo focused, so it has actually enabled decks that are not very extreme in their matchup spreads.

Baku is a different story. Upgraded hero powers from turn 1 have led to the creation of very polarizing decks, since much like Death Knights, they enable the potential for infinite value, but more importantly, extreme consistency in generating that value. Baku decks often hard counter each other because they’re entirely built around their hero power. They are feast or famine decks, and that leads to a polarizing experience. A good example is Odd Warrior: Its life gain is either oppressively powerful or entirely meaningless in the face of infinite value or infinite damage.

We urge the Hearthstone team to learn from this polarizing experience and tone down the elements that enable it. Infinite value, infinite life and infinite damage are dangerous. Mechanics that nullify the importance of card advantage or life as a resource often become degenerate, polarizing and lacking counterplay. It started with Jade Idol and escalated with Death Knights and Baku. Players simply hate it, and when brute force counterplay is introduced in response to it (Skulking Geist), it creates an experience that is just as frustrating and polarizing.

Polarization creates a poor game experience since players do not feel in control of the outcome of the game. Their decisions matter less, and when faced with a game in which you have little control over the outcome, it leads to a frustrating experience. This isn’t just true for a card game, it’s true for every game: Any MOBA or WoW PvP player can attest to the frustration of stun mechanics being too powerful and preventing control of your character. Queuing into 80-20 matchups is a similar experience of lacking that control. We want to be able to actually play the game and feel like most of our decisions matter.

Without the community’s contribution of data through either Track-o-Bot or Hearthstone Deck Tracker, articles such as these would not be possible. Contributing data is very easy and takes a few simple steps, after which no other action is required. If you enjoy our content, and would like to make sure it remains consistent and free – Sign Up!

Thank you, and see you in the next Data Reaper Report.