Welcome to the 135th edition of the Data Reaper Report!

Our Data Reaper Project, including the Data Reaper Live has 4,600 active contributors and we thank them wholeheartedly. Contributing to the Data Reaper project through Track-o-Bot or Hearthstone Deck Tracker (recommended) allows us to perform our analyses and to issue the weekly reports. Without the community’s contribution, there would be no project. Contributing data is very easy and takes a few simple steps, after which no other action is required. If you enjoy our content and would like to make sure it remains consistent and free – Sign Up! 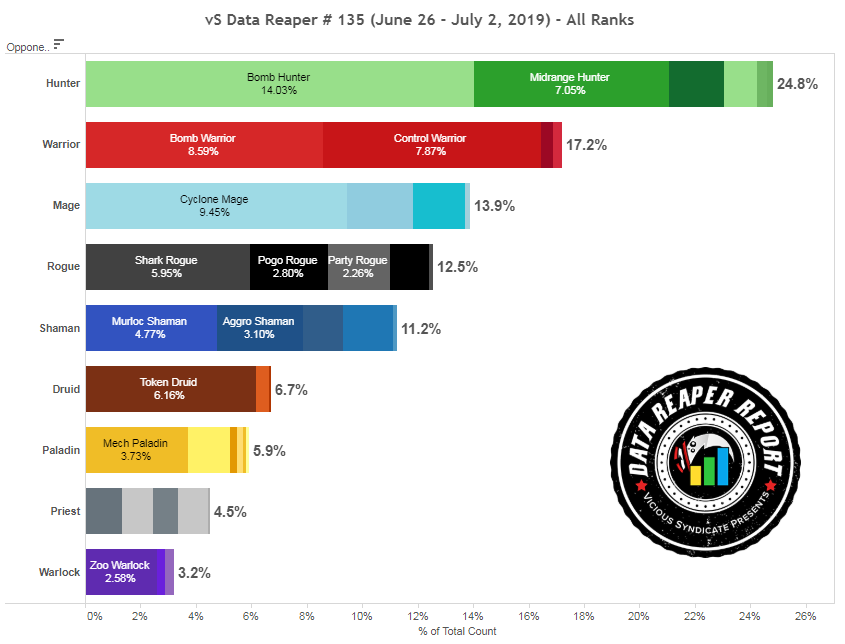 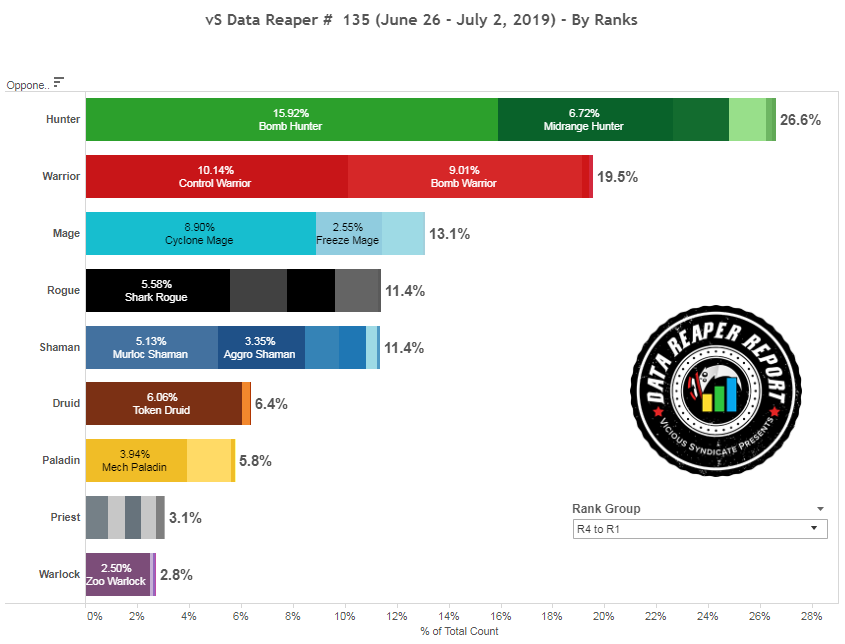 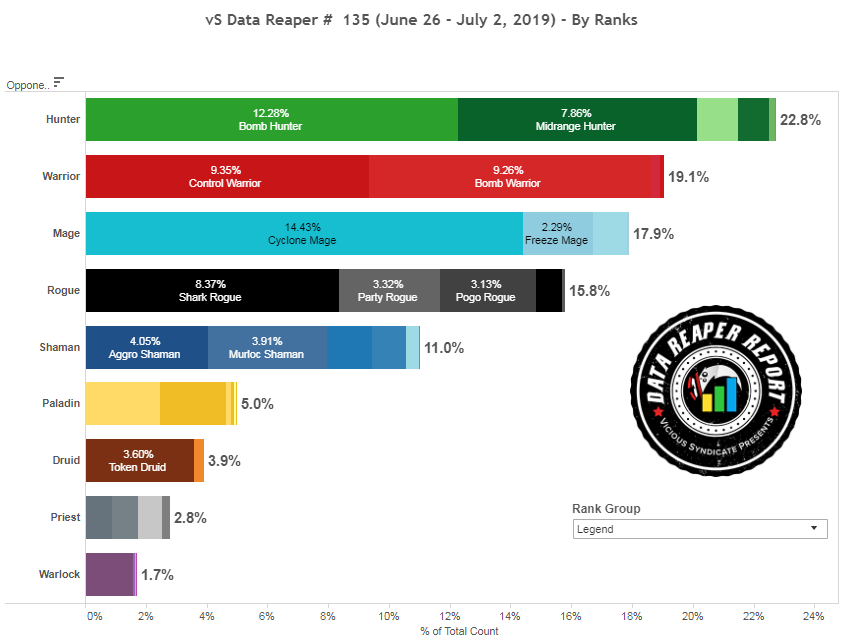 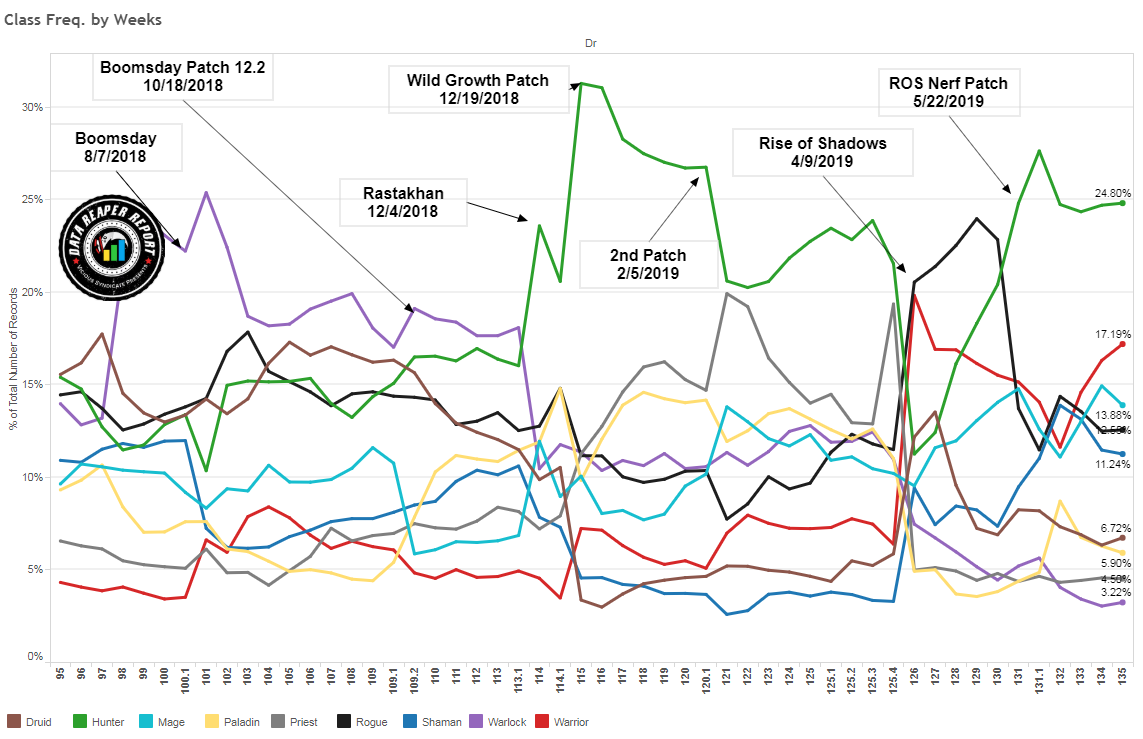 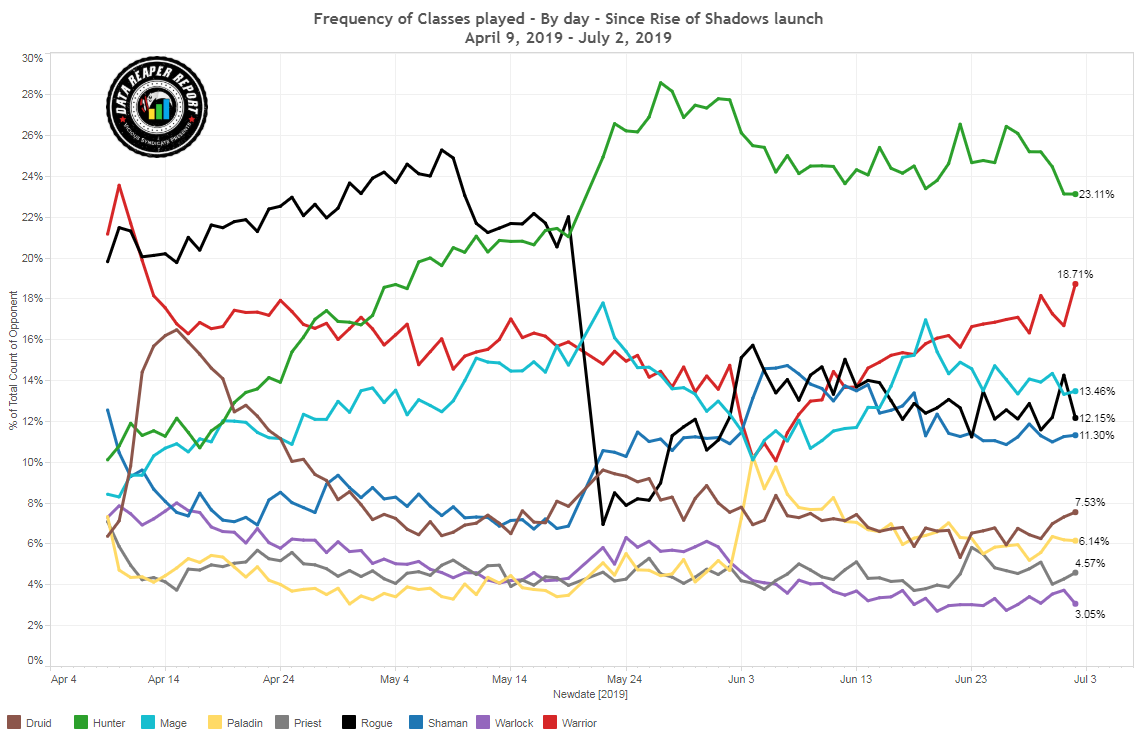 The next Standard Report is scheduled for July 18th (we’re taking a break next week).

A Wild Data Reaper Report is coming on July 14th!

The Hunter population has remained very steady, leading play rates at all rank brackets. It is deputized by Warrior, which has stabilized in its numbers at higher levels of play, while continuing to rise outside of legend. For both of these classes, archetype composition has not changed much.

While both Freeze Mage and Specters Mage are declining in play after failing to establish themselves as serious players in the meta, Cyclone Mage is surging. The deck continues to be extremely popular at legend compared to other ranks, which correlates with the deck’s greater success there, as shown last week.

Shark Rogue is recovering. Its play rate has finally stopped declining and it’s beginning to raise its head. Rogue is fairly diverse, with three other archetypes seeing play, though it remains to be seen how the loss of Vanish to the Hall of Fame will affect Pogo Rogue.

Shaman has accepted its status as the middle class. It is dominated by its two aggressive decks: Aggro Shaman and Murloc Shaman. Slower Shaman archetypes are slowly fading.

Paladin and Druid have also accepted their bit-part role in the meta. Token Druid and Mech Paladin are both serviceable, yet flawed ladder choices for different reasons. Token Druid is consistent yet isn’t particularly outstanding at anything specific, while Mech Paladin is the epitome of inconsistency with an extremely polarizing matchup spread.

Priest and Warlock remain at the bottom. Priest has nothing to show for in the current meta, and with the loss of Mind Blast, it will have even less. Warlock has something to show for, but can’t be proud of, in Zoo Warlock. 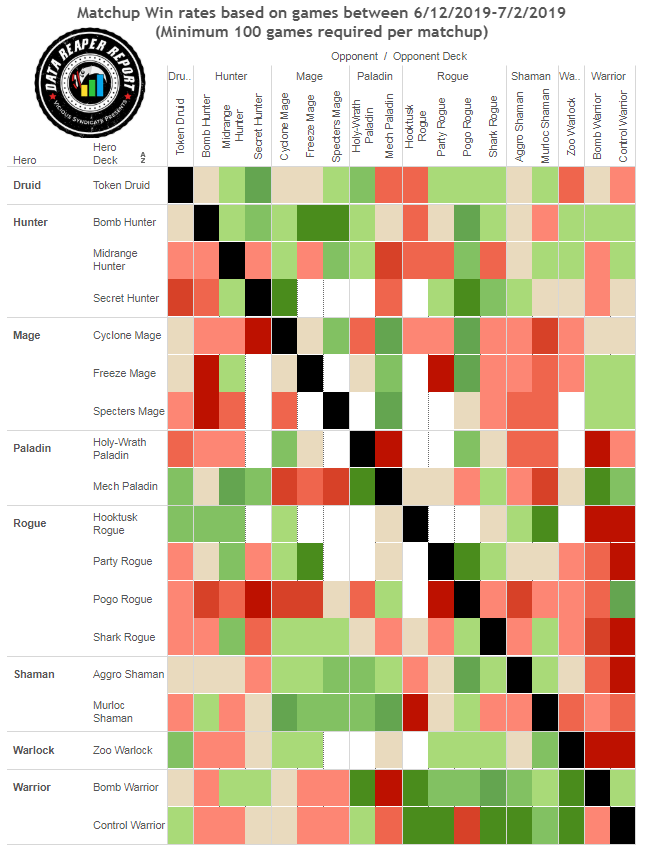 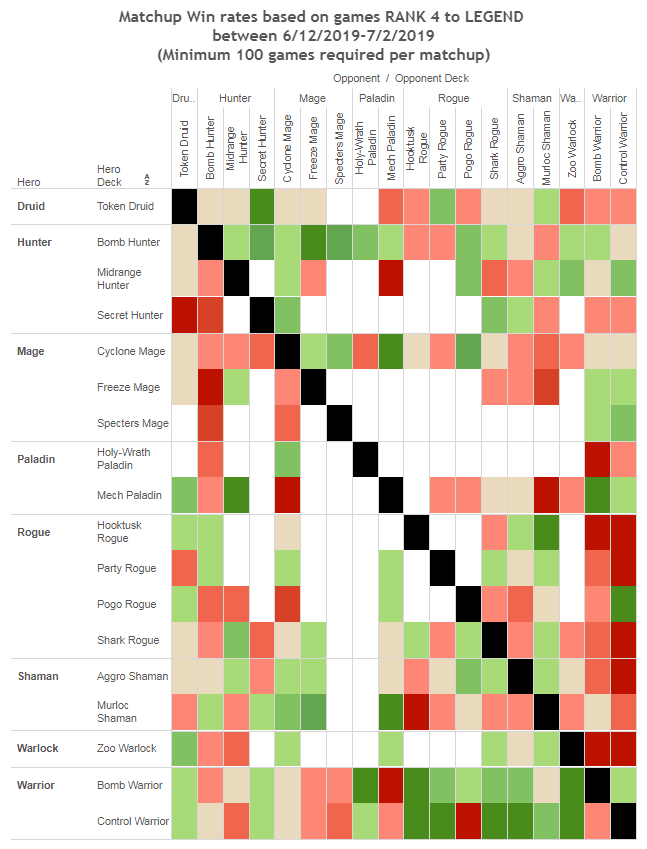 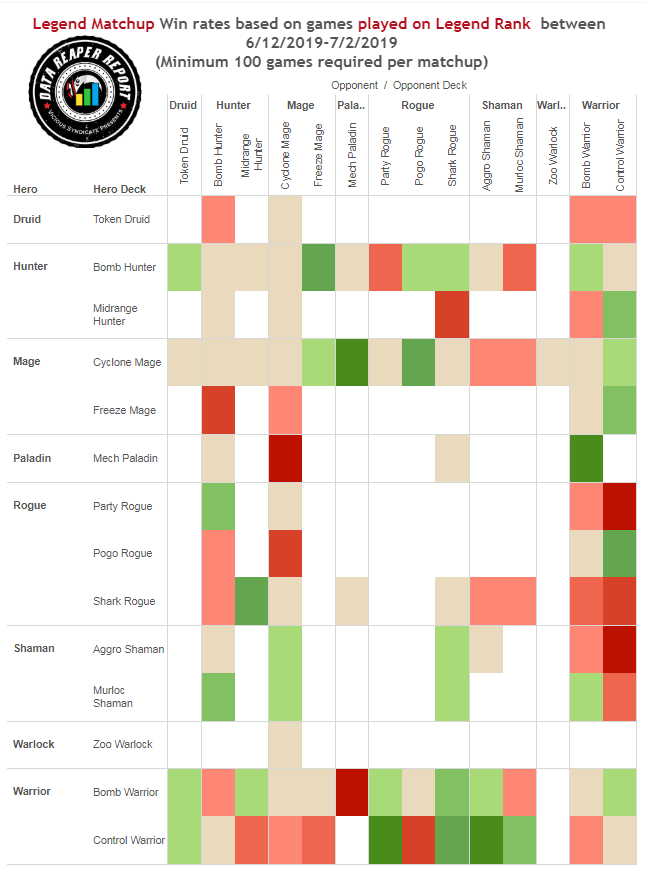 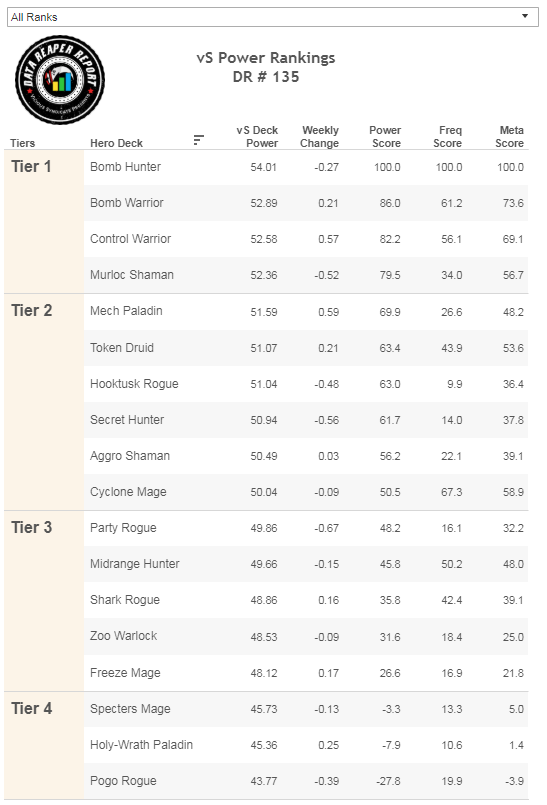 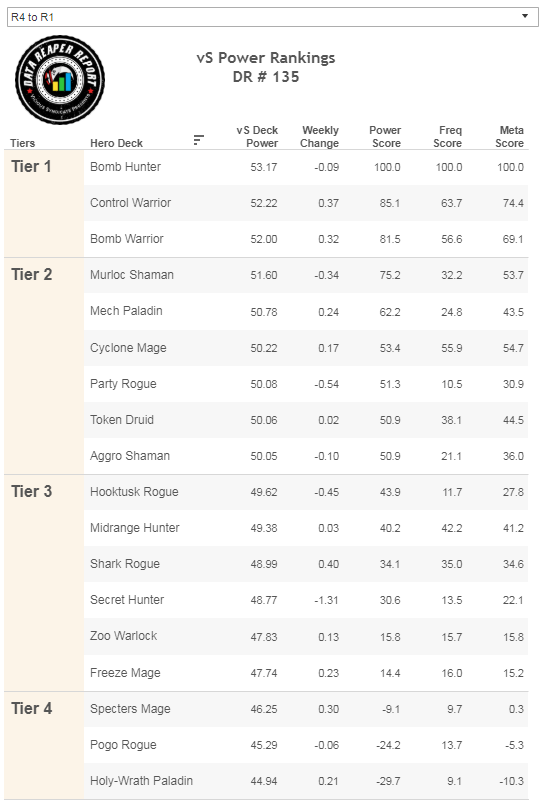 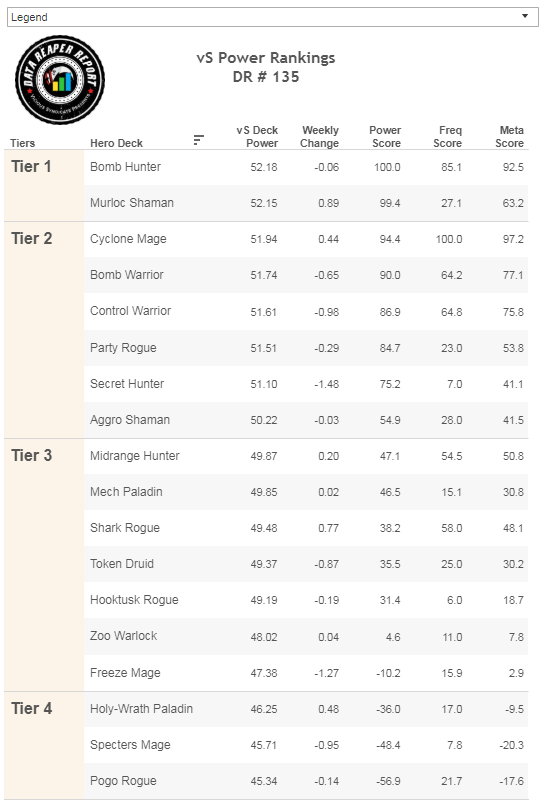 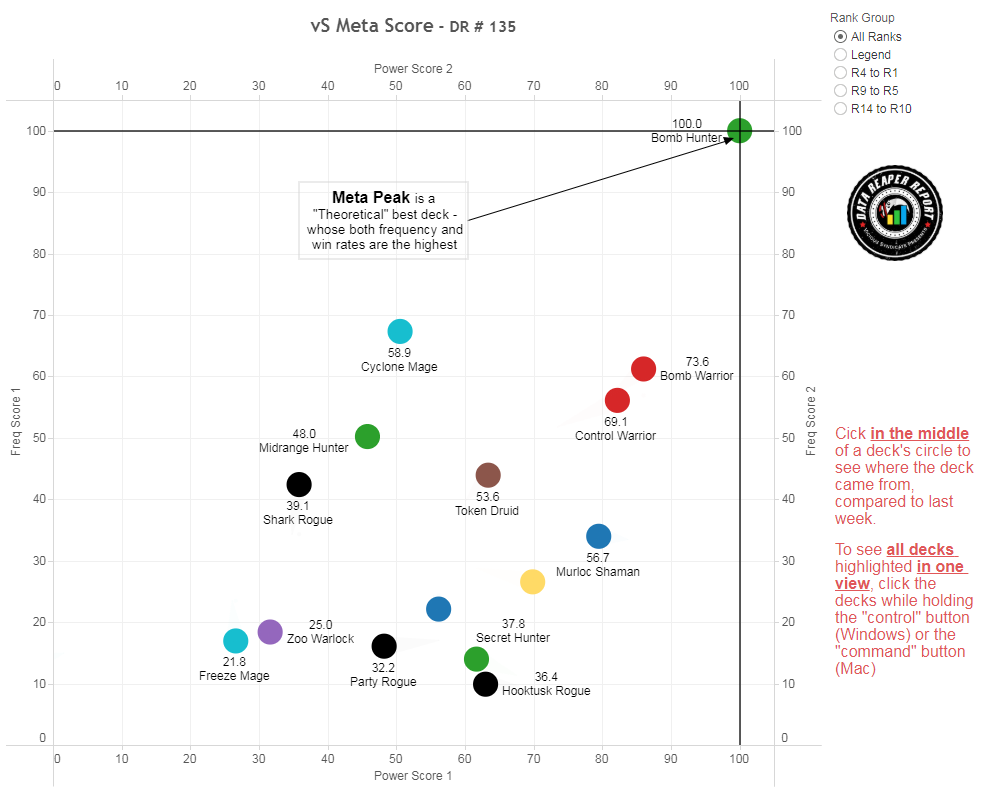 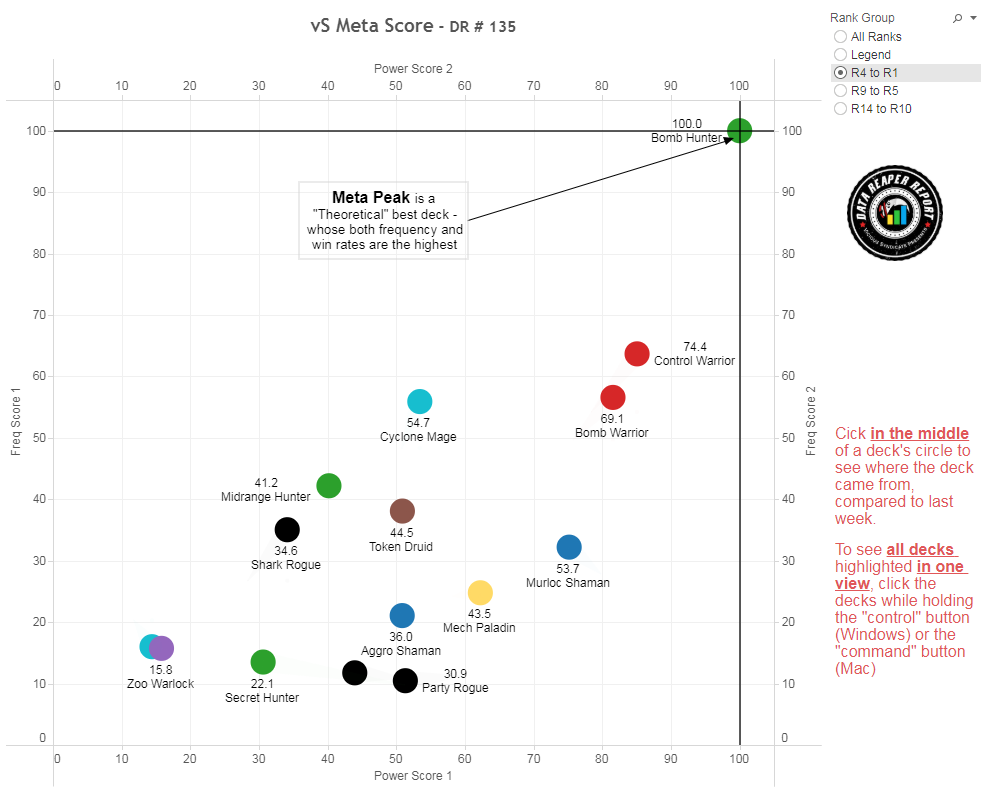 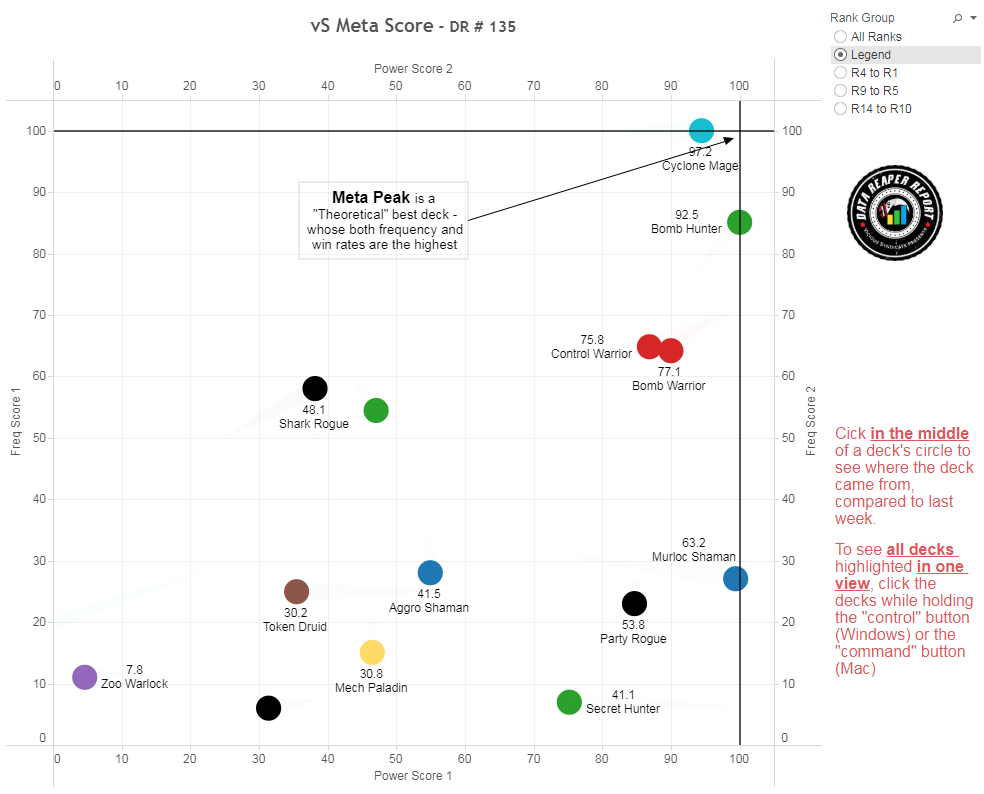 Win rates at higher levels of play continue to flatten, where Warrior has been further hit by the meta’s increasing hostility, which began to show last week. We’re nearly at a point where no deck is exceeding the 52% win rate mark at legend, something we’ve seen happen during Journey to Un’Goro. Bomb Hunter, Bomb Warrior, Control Warrior, Murloc Shaman, and Cyclone Mage look like the top ladder decks at legend, and there’s very little that separates them, with the first 3 pulling ahead on the climb to legend.

Cyclone Mage doesn’t look special at all outside of legend, but it’s very close to hitting Tier 1 at legend. As we’ve said last week, it’s the most difficult deck to pick up in the current meta, but is very rewarding once you get the hang of it and understand what it’s supposed to do. At that point, most matchups become very winnable since its biggest counters are not very common (Secret Hunter, Holy-Wrath Paladin).

Objectively, and strictly looking at the numbers, this meta is quite balanced in terms of power levels of the meta decks. As we’ve said last week, while Warrior can often feel limiting, it’s hardly an oppressive force that can be compared to meta tyrants of the past. Once Warrior developed a target on its back, the meta has been pretty effective at limiting both its play rate and its win rate to reasonable levels.

The biggest problem in Rise of Shadows might be class diversity. There are too many classes that either feel irrelevant or are extremely one-dimensional, which leads to low interest even if they do boast competitively viable options. Paladin lacks agency. Druid has been uneventful throughout this expansion. There is no real reason to play Warlock. Priest might as well not exist. These 4 classes have something in common too: the absence of effective late game win conditions. Hopefully, the new Saviors of Uldum set will provide them with compelling goals to strive for.

Hunter has finished June strong, once again as the most popular class at all levels of play. Bomb Hunter is clearly the strongest deck in the game outside of legend ranks, and an extremely popular choice for climbing the ladder, thanks to its fast-paced games and relatively simple game plan.

Midrange Hunter looked dominant after the initial balance changes to Rogue, but hasn’t been able to climb the same heights after the Rise of the Mech patch. Rogue is still fairly popular, and the Rogue matchups are a big problem for the archetype.

Warrior players will look back on Rise of Shadows as a golden age for the class, with its primary archetypes consistently proving to be two of the best decks in the game. Whether you play Bomb Warrior or Control Warrior doesn’t significantly change your odds of ladder success. Warrior’s resource generation and late game longevity have become elite after the retirement of Death Knights, and the Mad Genius’ rush aura makes it extremely difficult to sustain a board against a Warrior. Pair that with a removal kit that is second to none, and Warrior is having a good time, even though the field has certainly made things more difficult recently.

This week, the main development we’ve seen in Mage is the increase in popularity of SN1P-SN4P in Cyclone Mage. SN1P-SN4P has received a lot of praise and been touted as an “auto-include” in every Hearthstone deck due to its versatility.

While SN1P-SN4P is clearly a strong card, and there’s certainly a case to be made to play it ‘everywhere’, we do want to mention that it doesn’t look as powerful as its compatriot, Zilliax. Based on our analysis, SN1P-SN4P is very powerful in every deck that runs a modest package of mechs, but drops off when its only mech partner is Zilliax.

The reason is that by itself SN1P-SN4P is just a solid on-curve play. But, it is most powerful when used as a magnetizing buff. So, when the card is run without magnetizing targets, its performance drops. The card is probably rated highly due to its versatility and can be considered a flex option in the deck, but we wouldn’t say it is core.

Rogue has been dealt a blow with the loss of Vanish. The card has always been very powerful in certain combo-style decks of the class, most notably Quest Rogue. This change also affects current Pogo Rogue, which has been a fringe off-meta deck already.

Replacing Vanish is Plaguebringer, a card that doesn’t strike us as one that can be particularly impactful (which is intended). The only interesting interaction it has is with Wild Pyromancer, but this combo seems very slow and certainly doesn’t fit any current Rogue decks.

Brightwing has a better chance of finding its way into current Rogue decks. Since there’s a good chance it will generate a class legendary, it’s a soft activator to Vendetta. It’s also a high-value battlecry, so it might fit into Shark decks, but it’s too early to tell how effective that could be.

While Murloc Shaman continues to look like the stronger deck, Aggro Shaman is attempting to steal some of its early game minions in order to bolster its relatively weak early game.

After the experimentation with Crystallizers, we’ve seen an increase in the popularity of Murloc Tidecaller in Aggro Shaman on the back of WuLing’s high legend success. Much like Underbelly Angler’s usage in the deck, the point of Murloc Tidecaller is to present an early game threat that can snowball and demand removal even with little tribal synergy.

After looking into Tidecallers, we think they’re far superior to Crystallizers and have real merit in the deck, since they also make Underbelly Anglers stronger and more consistent. This small murloc package is worth including over Unbound Elementals, which were mostly used due to lack of stronger early game options.

While Mech Paladin might be generally disliked as a ladder option, it’s quite competitive. It’s just matchup dependent and can be very inconsistent as a result. In a Warrior/Hunter heavy meta, it’s very powerful. If it runs into Mages and Shamans, it is absolutely miserable. Those are the rules Uther will live by until the Saviors of Uldum arrive.

As Malfurion sleeps, bored of the uneventful period that the Druid class has gone through, the Saviors of Uldum have announced their arrival with a teaser that will keep Druid players curious.

After the destruction of Druid’s mana generation mechanics through several nerfs, Team 5 has given us a clue what they want us to do: just don’t spend mana! Untapped Potential is a new quest that encourages Druids to pass their early turns in order to receive their award. The problem is that Ossirian Tear doesn’t look particularly powerful in the context of current standard format Choose One cards. Druid will very likely receive more of them in the upcoming set.

Priest players will bemoan the loss of Mind Blast as the class now has even fewer options to win games with. However, there is good news for Priest players, as it seems Team 5 has pushed up the release of “completely ridiculous board clear” from the usual December launch into August. Plague of Death is a slower, admittedly worse Psychic Scream, but one that would fit an attrition-centric Control Priest deck rather than a combo-centric one.

Now, about that win condition, Blizzard…

Gul’dan is counting the days until Saviors of Uldum arrives. Alongside Druid’s new quest, Warlock’s quest was revealed: Supreme Archaeology. At first glance, this quest seems horribly slow, even when taking Plot Twist shenanigans into consideration. The reward doesn’t even strike us as something that would immediately win the game either. However, it’s the kind of card that can get lost without context, so we’ll need to see the rest of the set before making a serious call.

Our Data Reaper Project, including the Data Reaper Live has 4,600 active contributors. Without them, this project would not be possible, so we’d like to thank all of our contributors for their help.