Welcome to the 191st edition of the Data Reaper Report! This is the last report for Madness at the Darkmoon Faire. 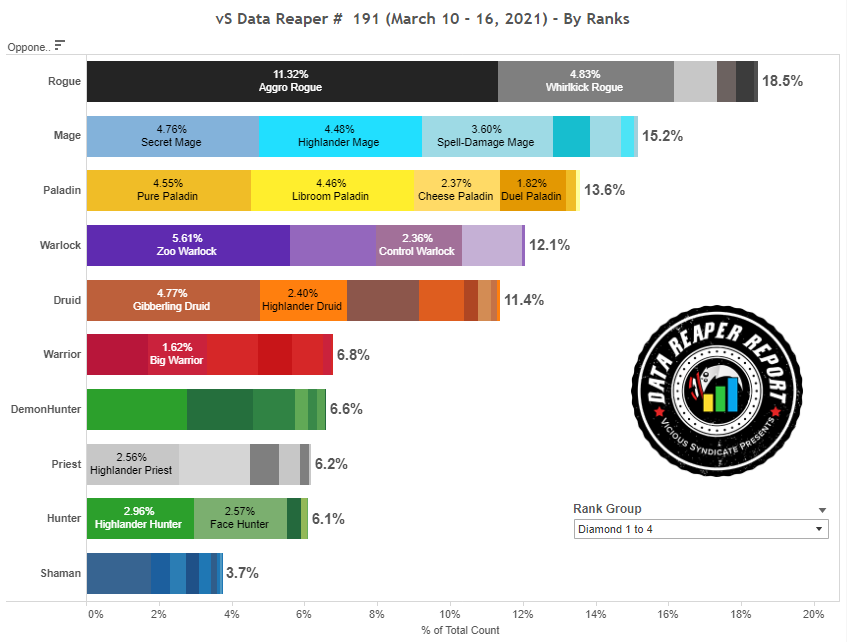 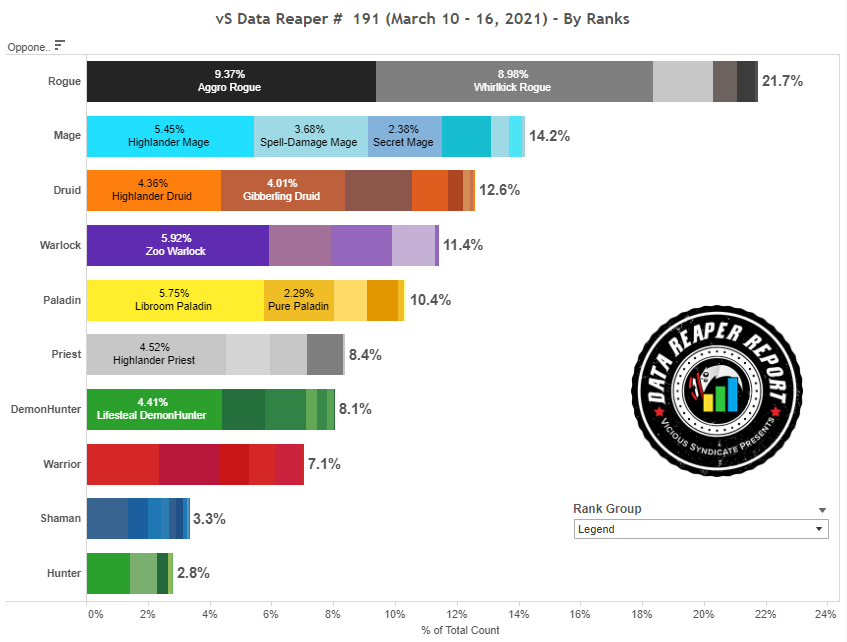 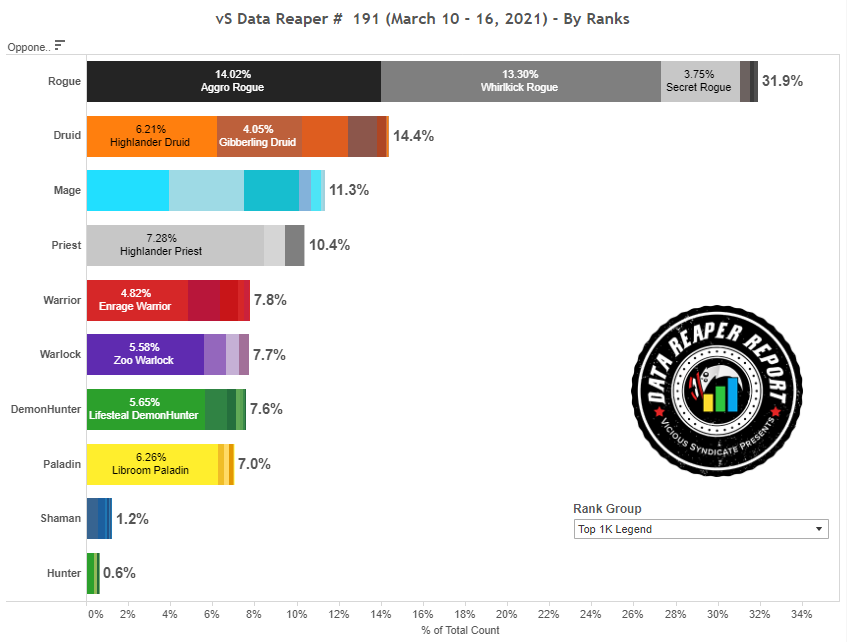 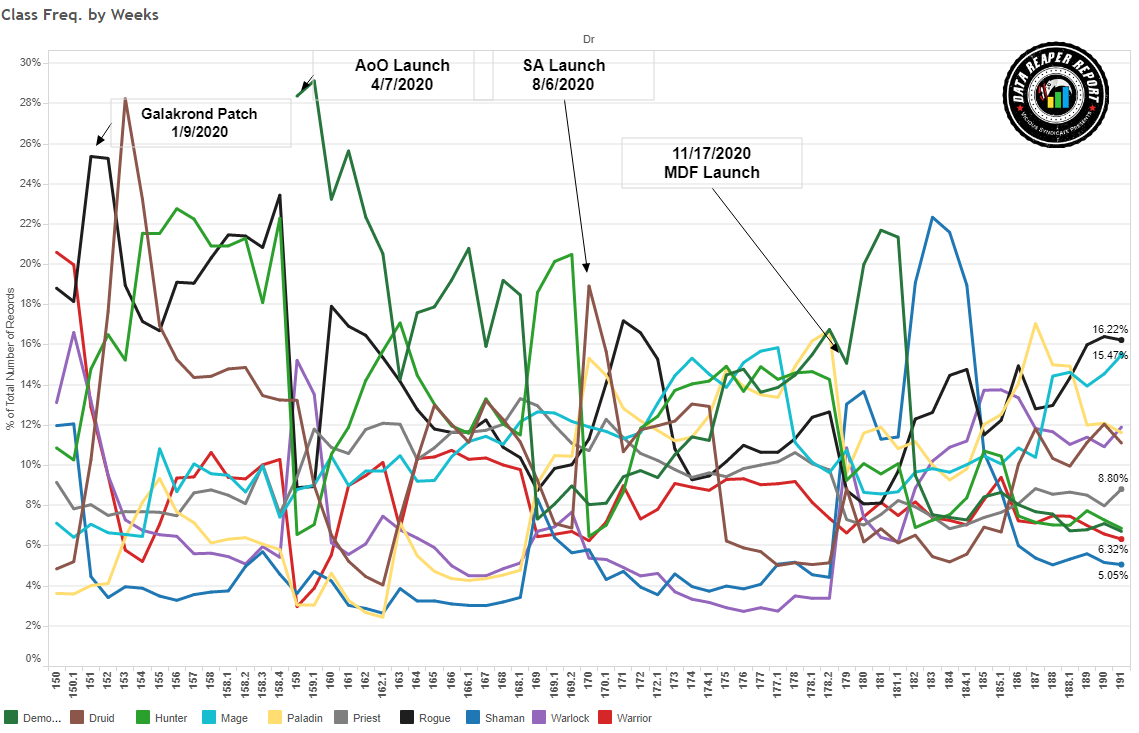 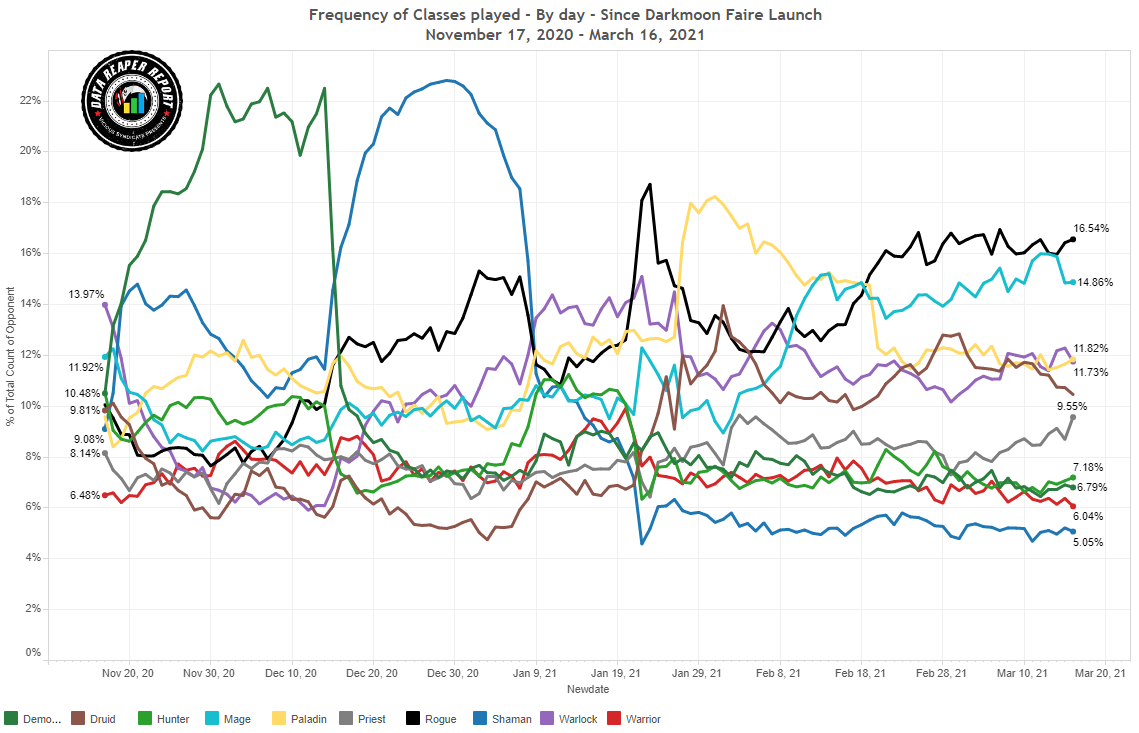 Rogue is rising in popularity again across ladder. Interestingly, Aggro Rogue has surpassed Whirlkick Rogue’s prevalence at top legend. Secret Rogue got some strong publicity following its success in Ironforge, and we can see the deck’s numbers grow at top legend.

Druid isn’t exhibiting too many changes. Outside of legend, Gibberling Druid is the most popular deck. At legend, Highlander Druid eclipses it. Another deck that performed well in Ironforge, Treant Druid, is seeing a bit more play at top legend.

Highlander Mage has grown in popularity. This is particularly true at legend where it has surpassed Spell-Damage Mage, which has been struggling on ladder in recent weeks. Secret Mage is fairly noticeable but disappears at top legend. Mozaki Mage pops up in greater numbers at top legend, since some players at higher levels of ladder don’t mind losing as long as they look cool while doing it.

Priest is standing firm with its strong Highlander archetype. Other archetypes of the class have consistently looked terrible at all levels of play throughout this expansion.

Enrage Warrior maintains its small presence after feeling increasingly uncomfortable due to the rise of the Highlander decks. There’s a bit of Bomb Warrior, but other Warrior decks have faded away, including Control Warrior.

Lifesteal Demon Hunter had an opportunity to prove, once and for all, how dominant it truly is at top-level play. The deck proceeded to display a sub 50% win rate (narrowly) and its representation at the top 16 was below its representation in the whole field. We’d guess players at Ironforge were just bad and we needed a smaller sample of the bestest, biggest brains to find out the truth!

Libroom Paladin experienced some bad publicity in Ironforge. It did quite well off-stream and seemed to struggle on-stream, which created the impression it was underperforming. That seems to have negatively affected its play rate at top legend this week, but its overall win rate and top 16 conversion rate were more than fine.

Poor Shaman and Hunter were almost nowhere to be found. 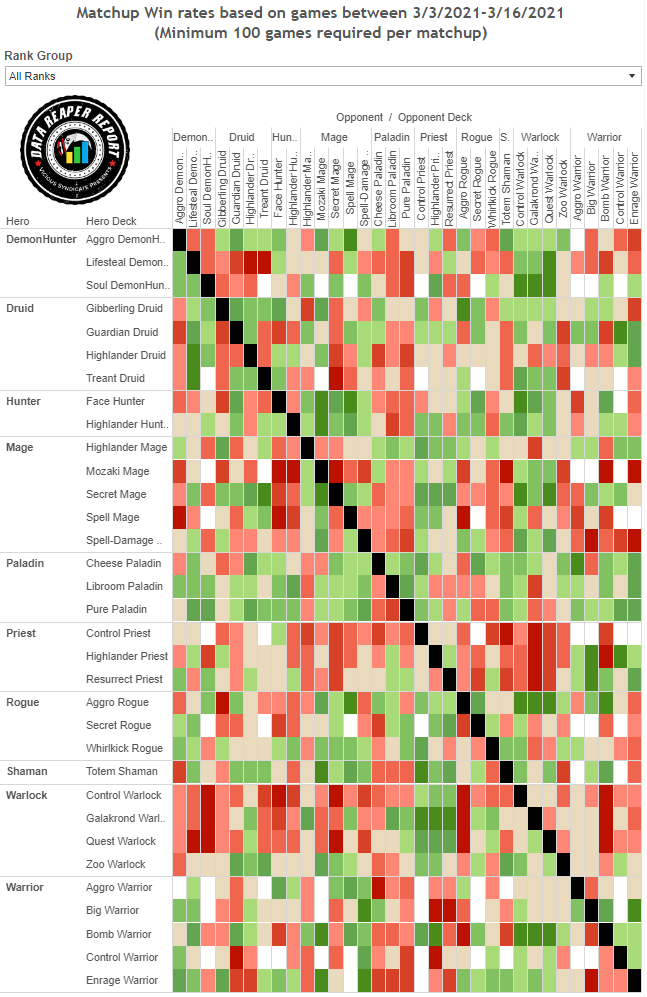 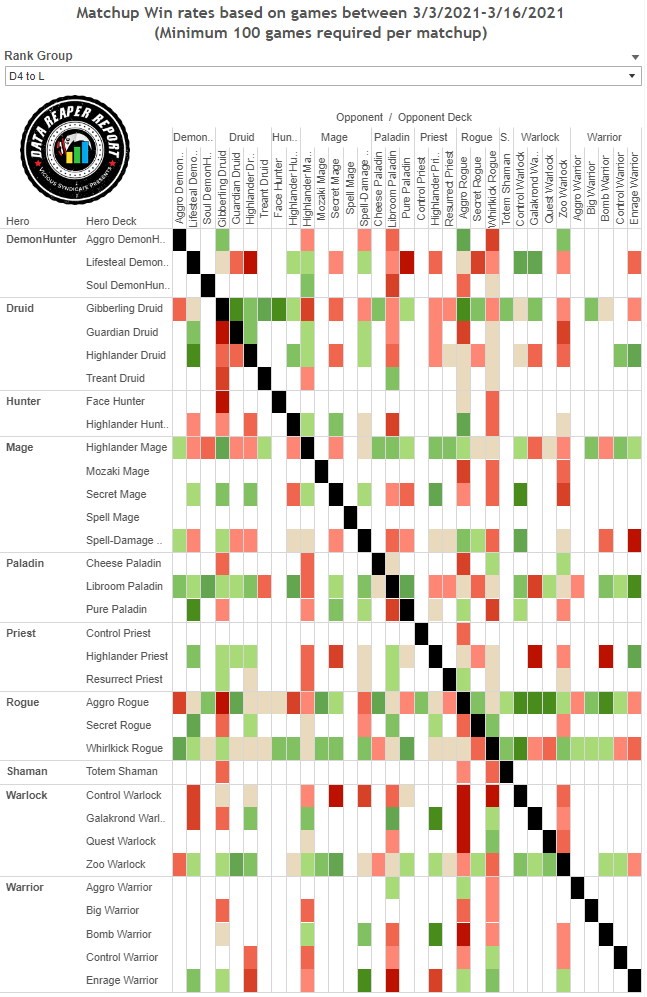 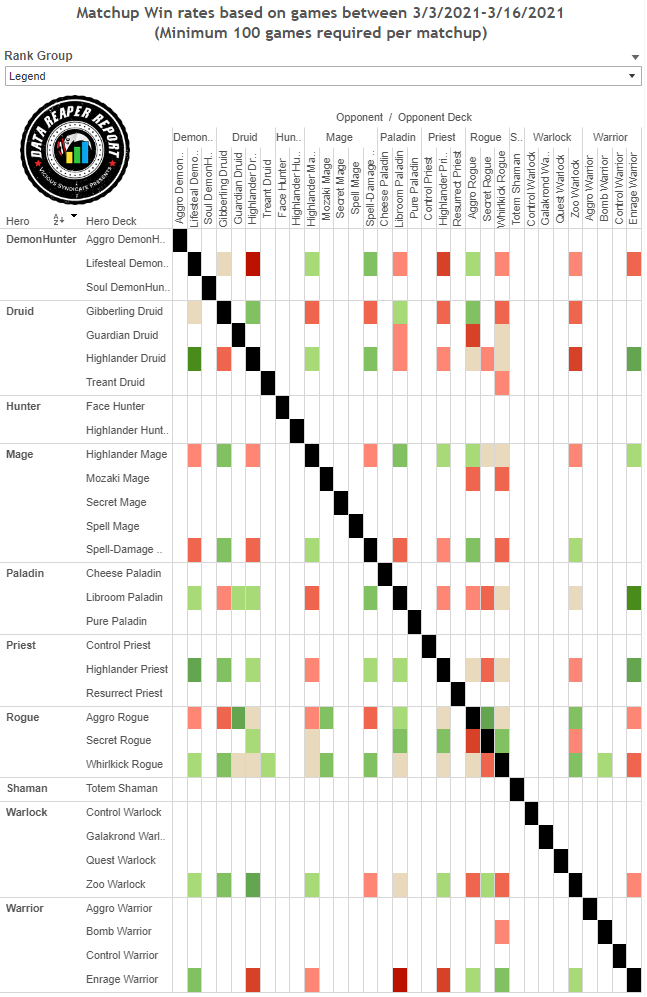 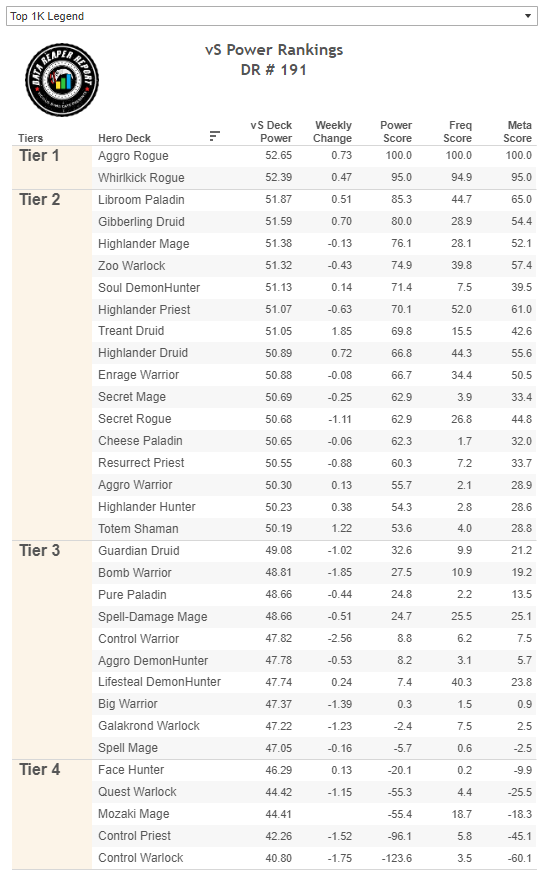 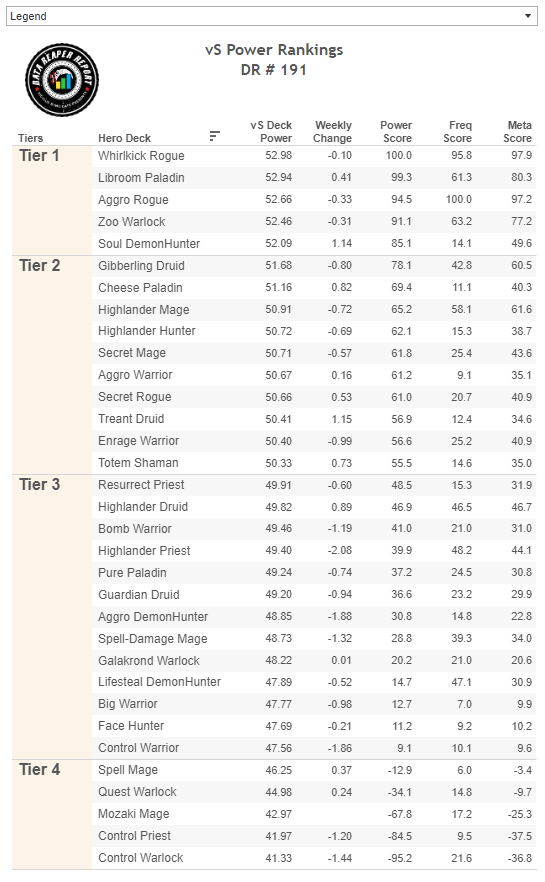 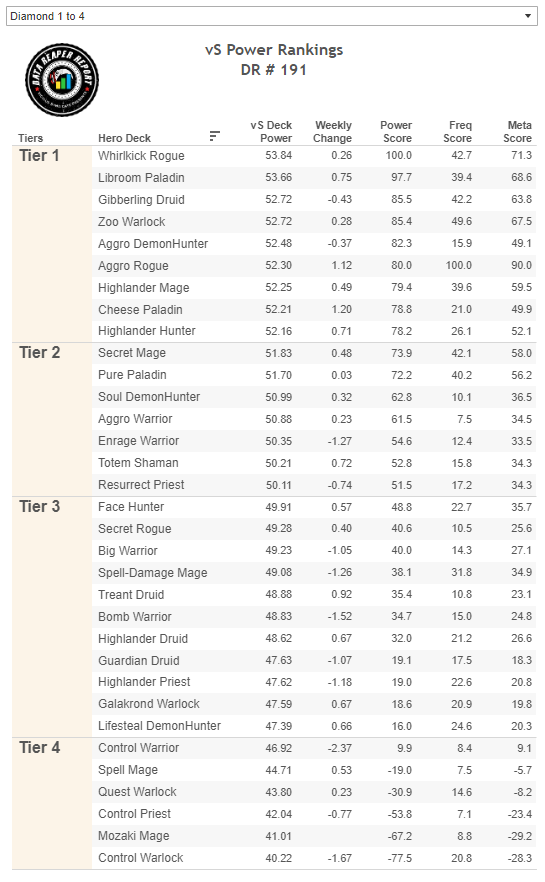 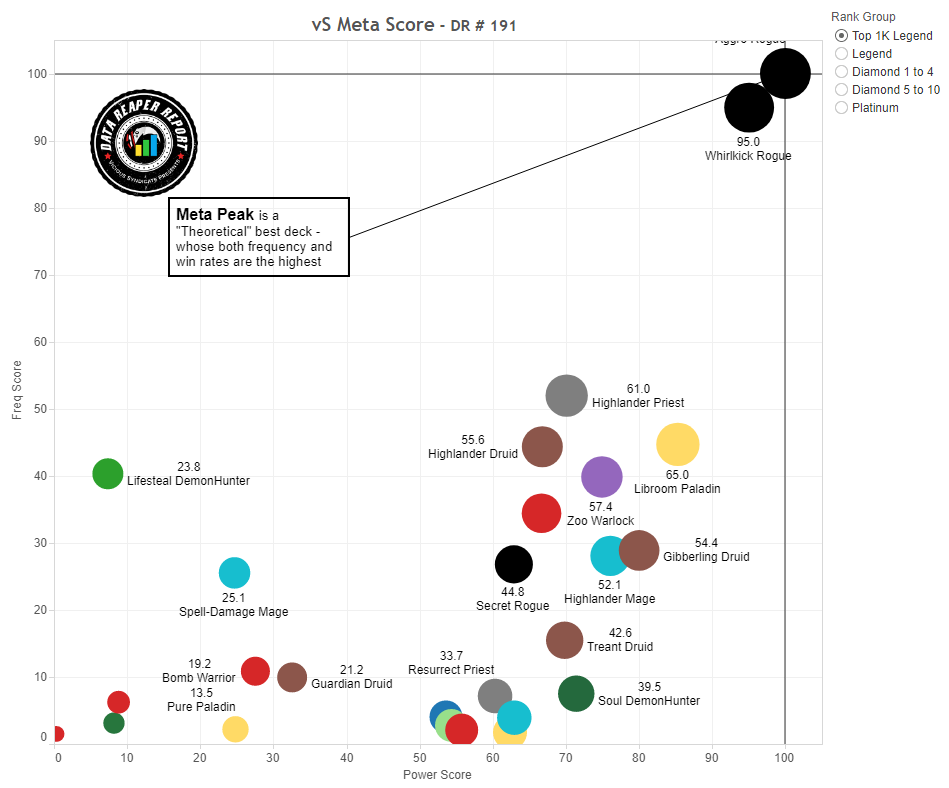 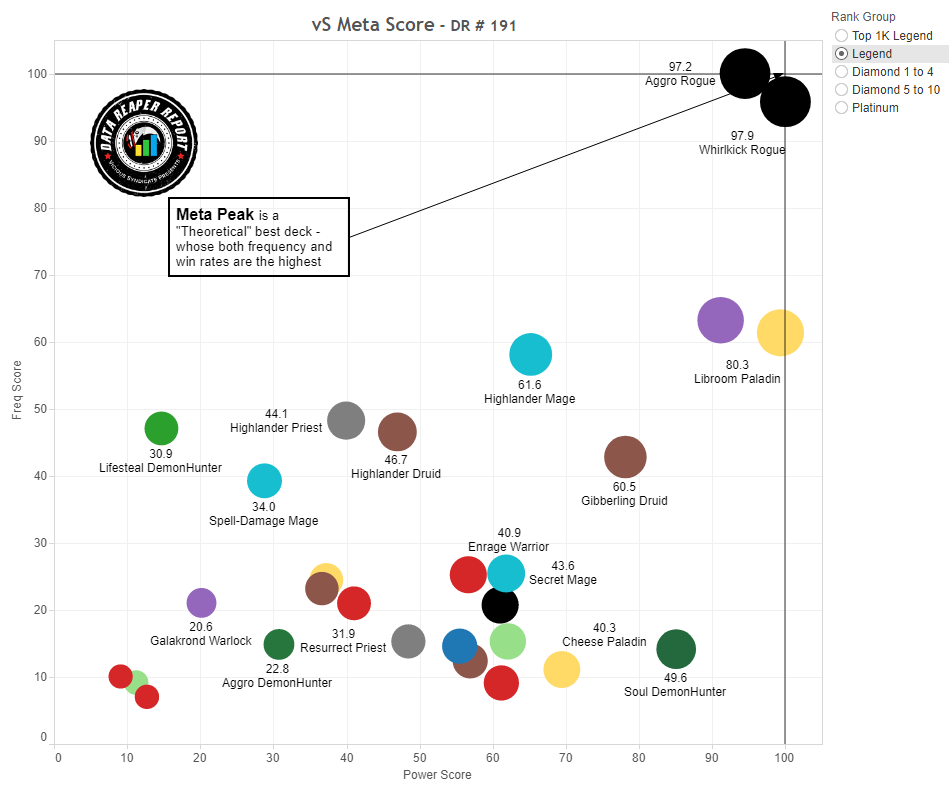 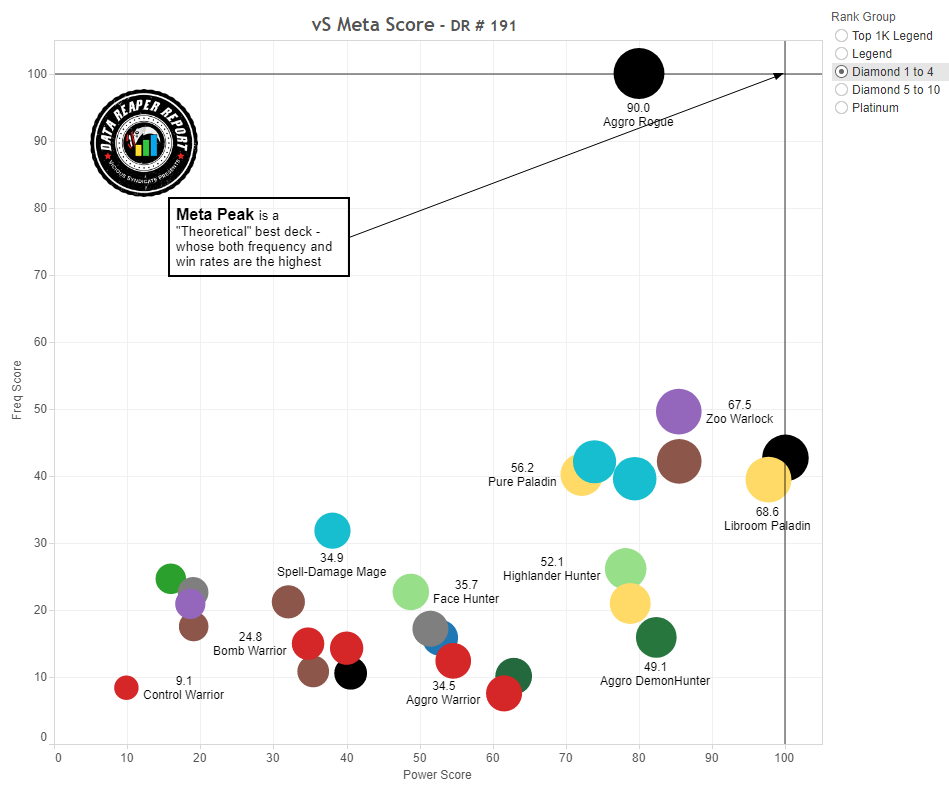 The Darkmoon Faire is the culmination of two strong years for Rogue, which started with Rise of the Shadows and the introduction of lackeys. EVIL Miscreant will be remembered as one of the best Rogue cards of all time (do you remember that it was NERFED?), and one that enabled multiple Rogue decks over the last two years, including the Whirlkick build we see today. You’ve served Valeera well, little one.

Rotation does take away much of the value-generating tools available to the class, but its Core and Phoenix sets are still very good. Recall that its Phoenix sets brought the Secret and Stealth archetypes to the forefront.

So what lies ahead in the Hearthstone landscape? Will Valeera continue to sit on her throne and strengthen her reputation as possibly the greatest Hearthstone Hero of all time? Will Uther take advantage of his strong Pheonix sets and a revamped Core set to challenge her? Will anyone else step up? Will the post-rotation meta be as diverse and competitive, and perhaps even more so, than the one we’ve seen at the Darkmoon Faire?

All the answers will be revealed in due time. For now, watch your back.