Welcome to the 200th edition of the Data Reaper Report! 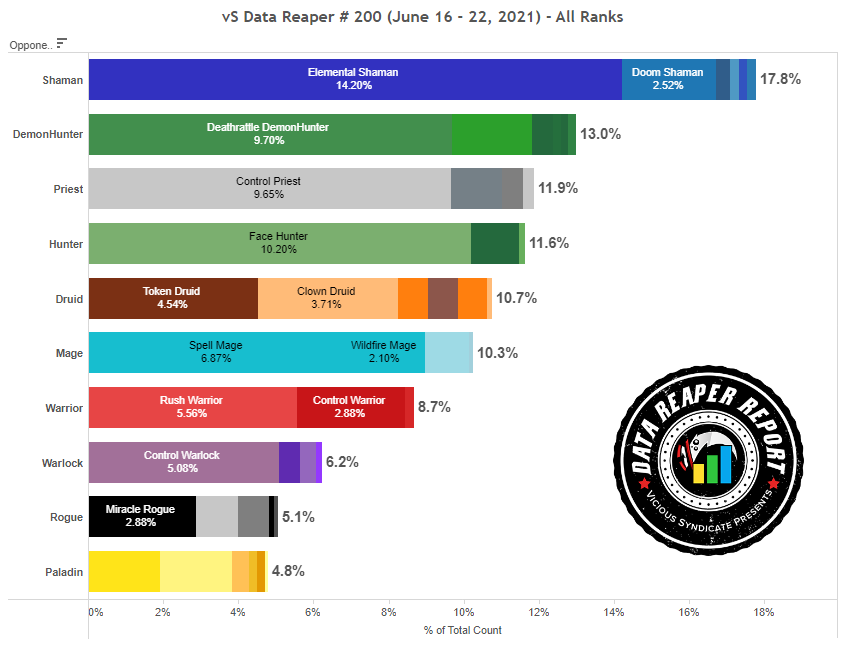 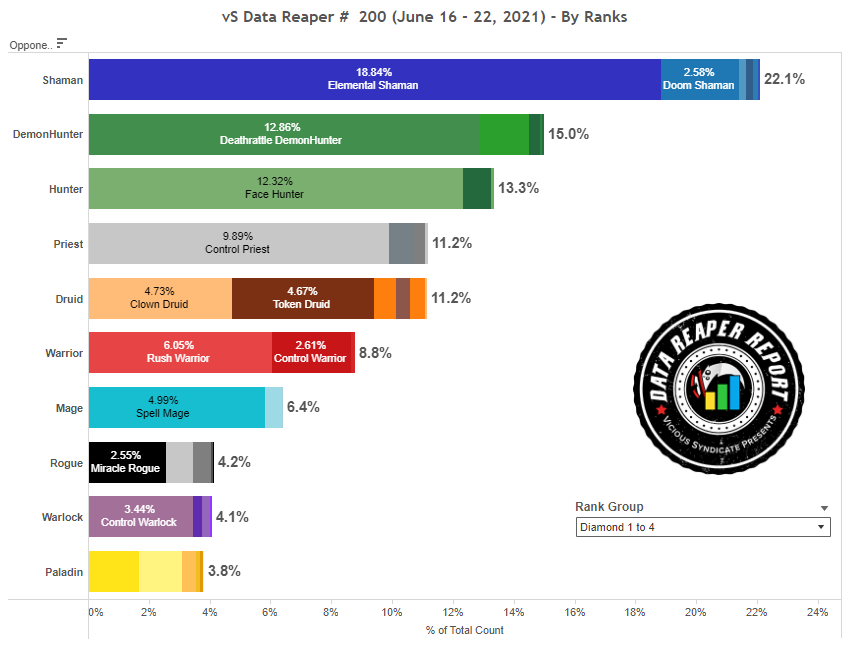 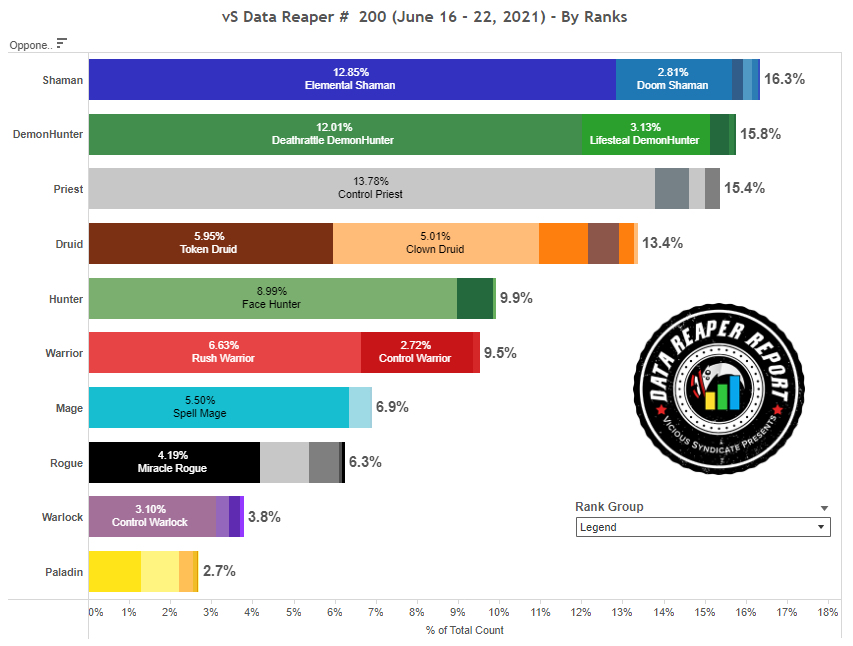 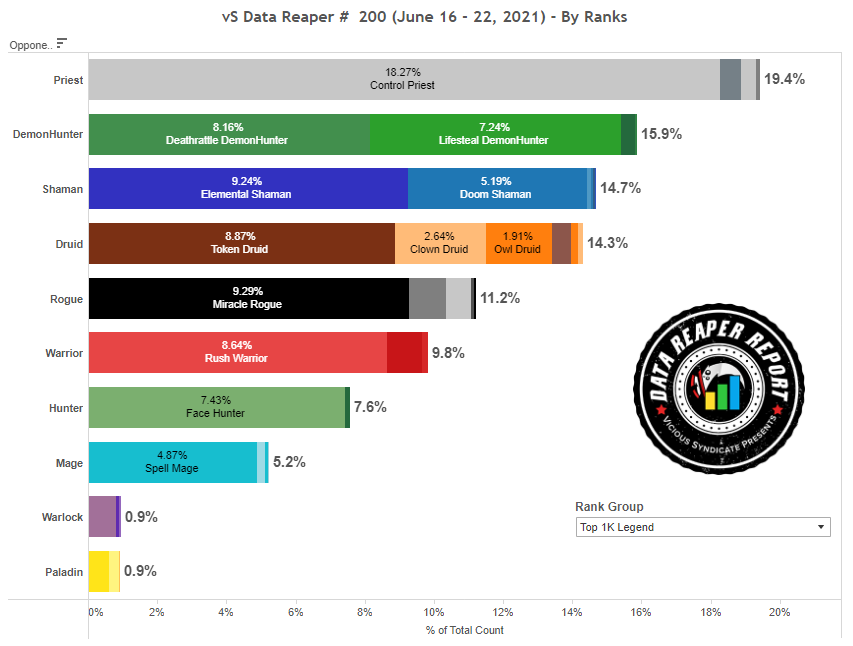 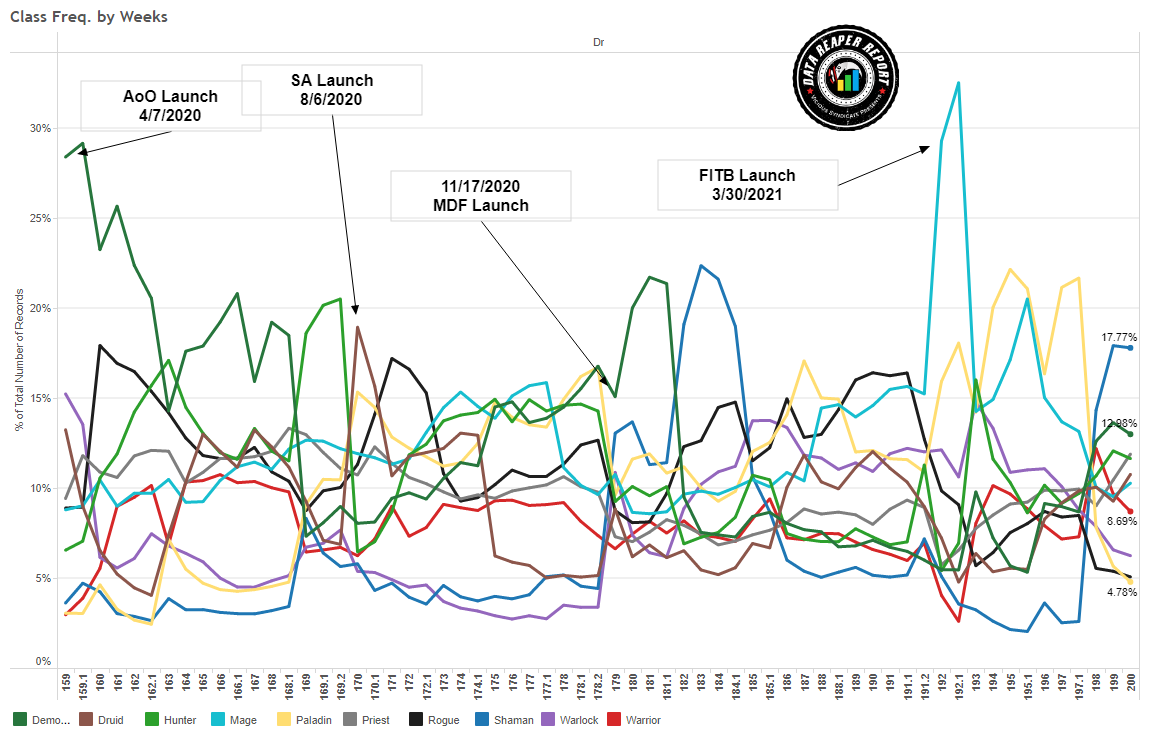 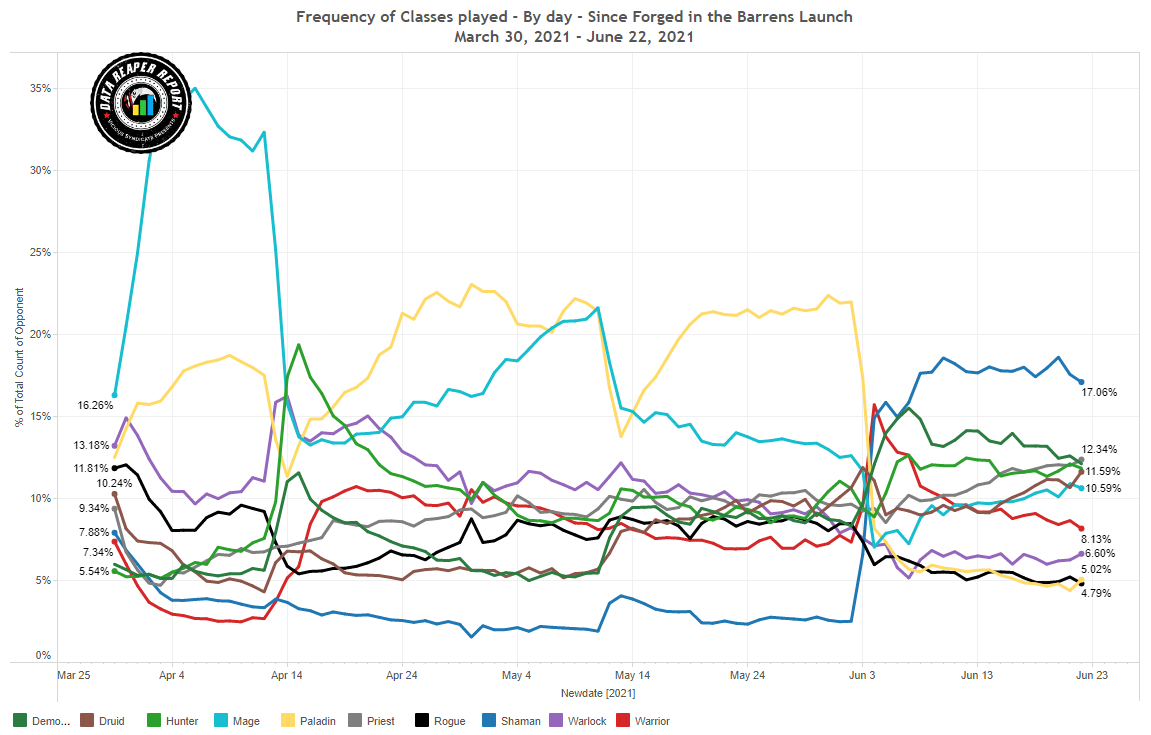 The biggest difference between the meta at different ranks is Control Priest. From a deck that sees a reasonable amount of play throughout ladder, it becomes excessively dominant at top legend, closing in on a 20% play rate. Have you noticed an increase in the complaints related to this class coming from content creators this week? We basically saw it happening through the data. Furthermore, Control Priest builds at top legend are becoming increasingly greedy to win the mirror, and we’ll talk about what’s happening there later.

Deathrattle DH is declining throughout ladder. Its play rate was pretty inflated, and it’s now dropping in accordance with the fall in its win rate that we’ve observed last week. Lifesteal DH is gaining more momentum at top legend, becoming quite prevalent.

Shaman’s shift into Elemental Shaman builds continues, with the archetype split between Whack & Doom variants, while the non-Elemental Doomhammer Shaman deck is gradually declining. Shaman is clearly the most popular class in the format outside of top legend, where Anduin is king.

Encouraged by its strong performance recently, Token Druid is rising in play, becoming more common as you climb ladder and peaking at top legend. Clown Druid rivals Token at most rank brackets, but falls off at higher levels. Celestial Druid is disappearing, while an Owl Druid deck pioneered by Jank Master Jambre has popped up.

Miracle Rogue is another deck that is consistently favored by high-level players. There are no developments within the class as all of its archetypes have long been solved.

There’s an understandable decline in Hunter, but the class is still popular throughout ladder. There’s some experimentation in Face Hunter following Dalaran that leaked into ladder, raising some questions on whether the deck could be improved.

Spell Mage is very popular at lower ranks, but remains fringe at top legend where it’s mostly piloted by players who are fed up with Priests.

There is zero interest in Warlock and Paladin. Control Warlock will continue to be played at lower ranks for fun by the Tickatus faithful, but it has no competitive upside. Paladin is seeing ‘some changes’ within the remains of Libram Paladin. 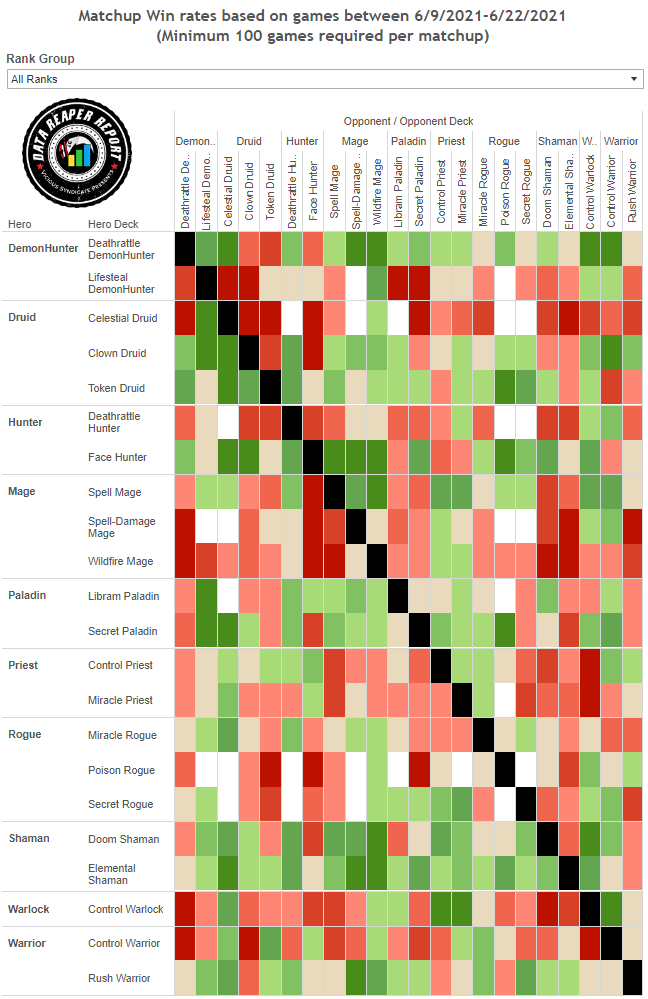 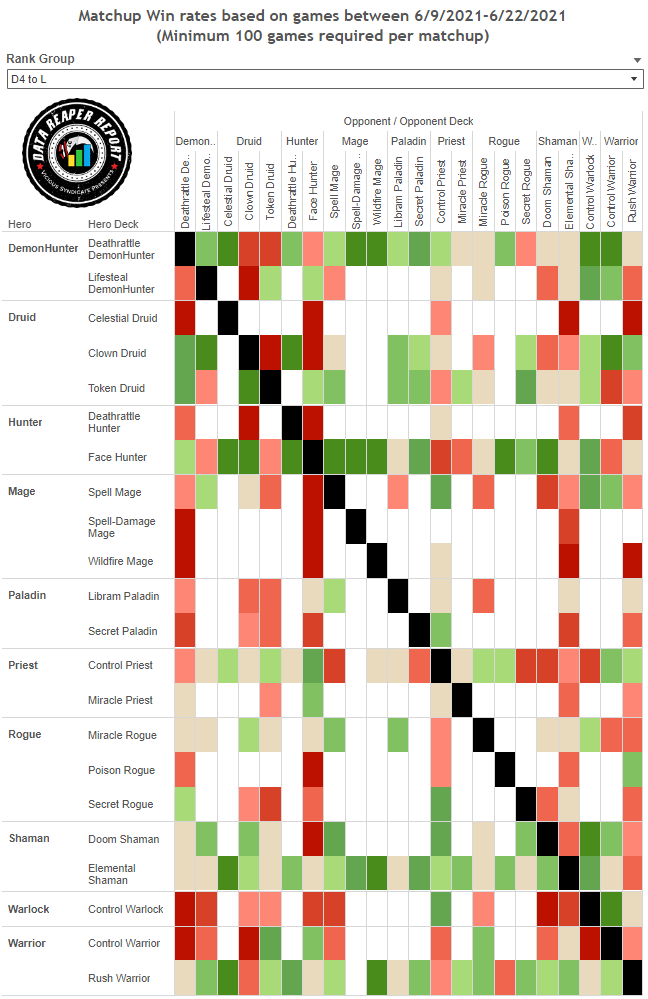 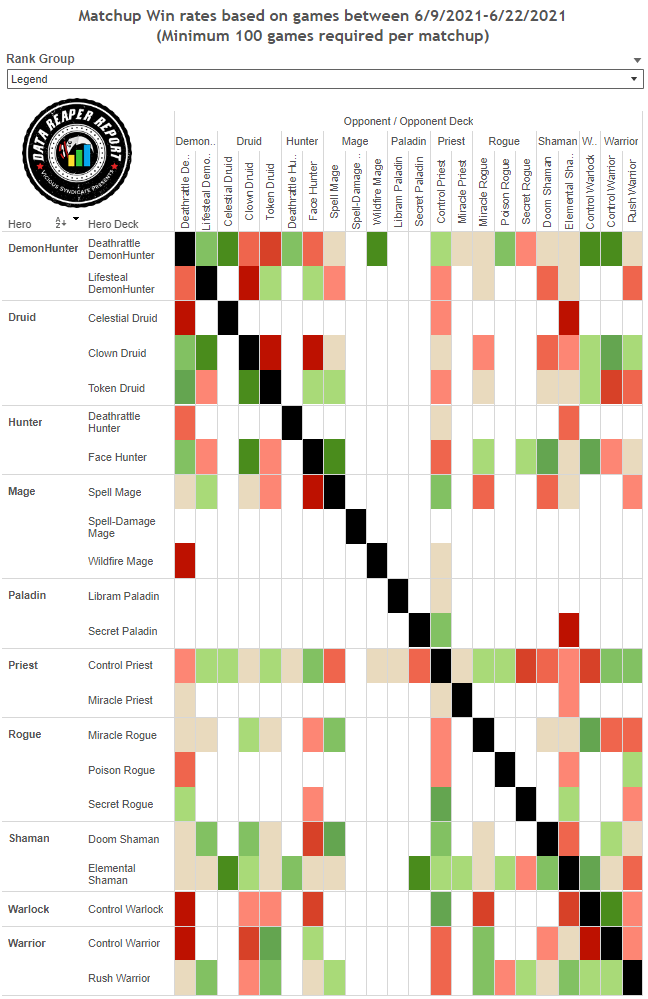 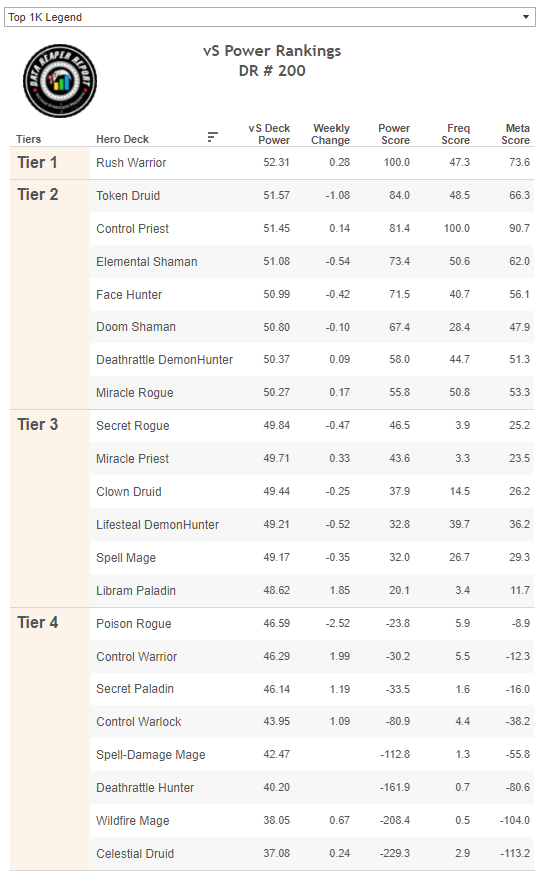 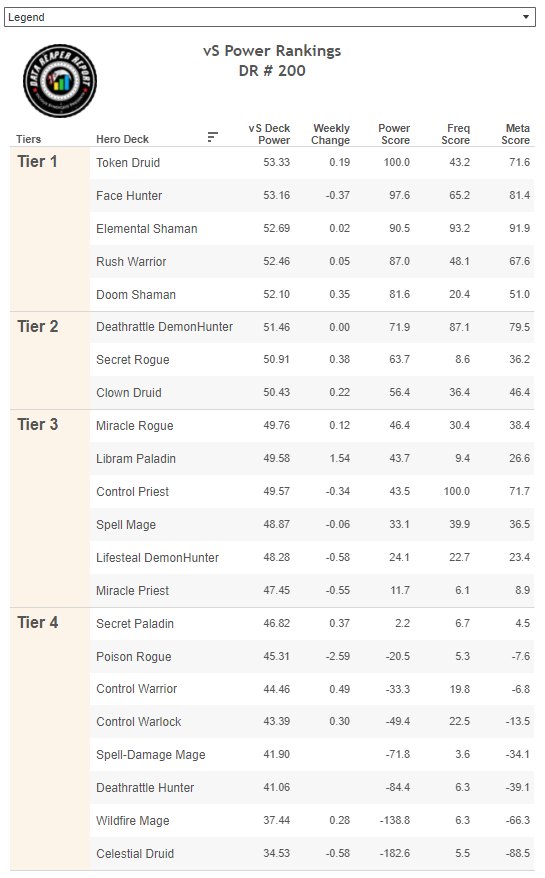 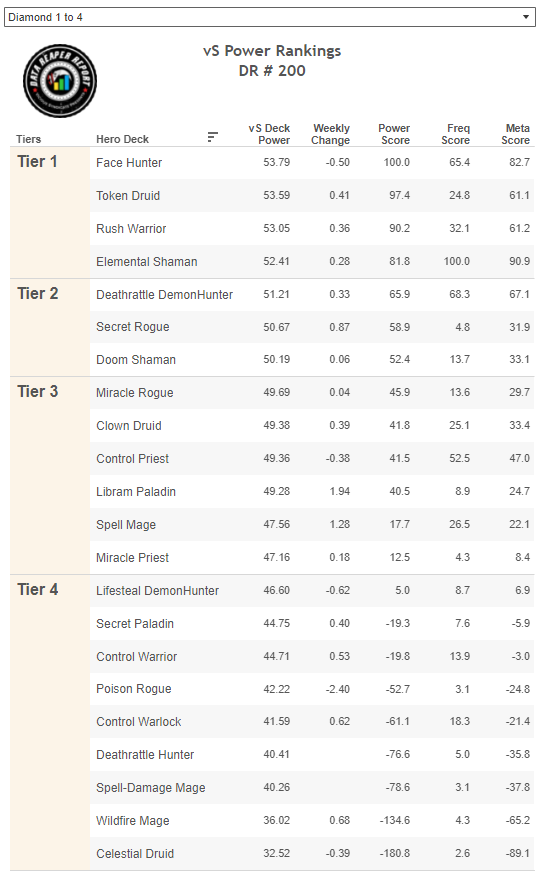 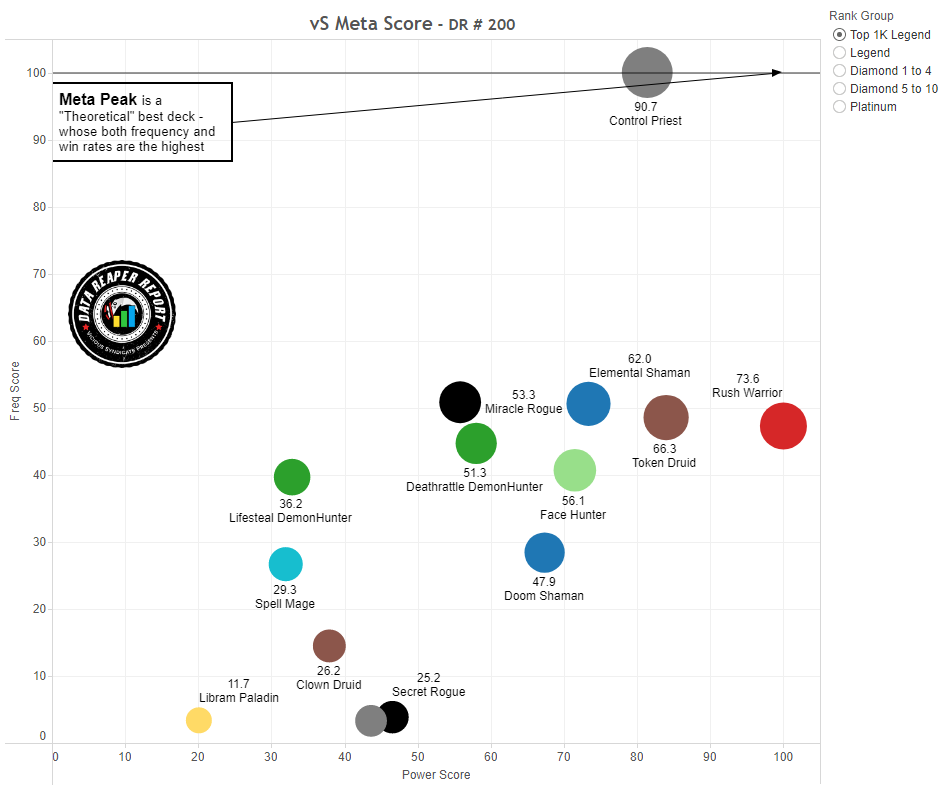 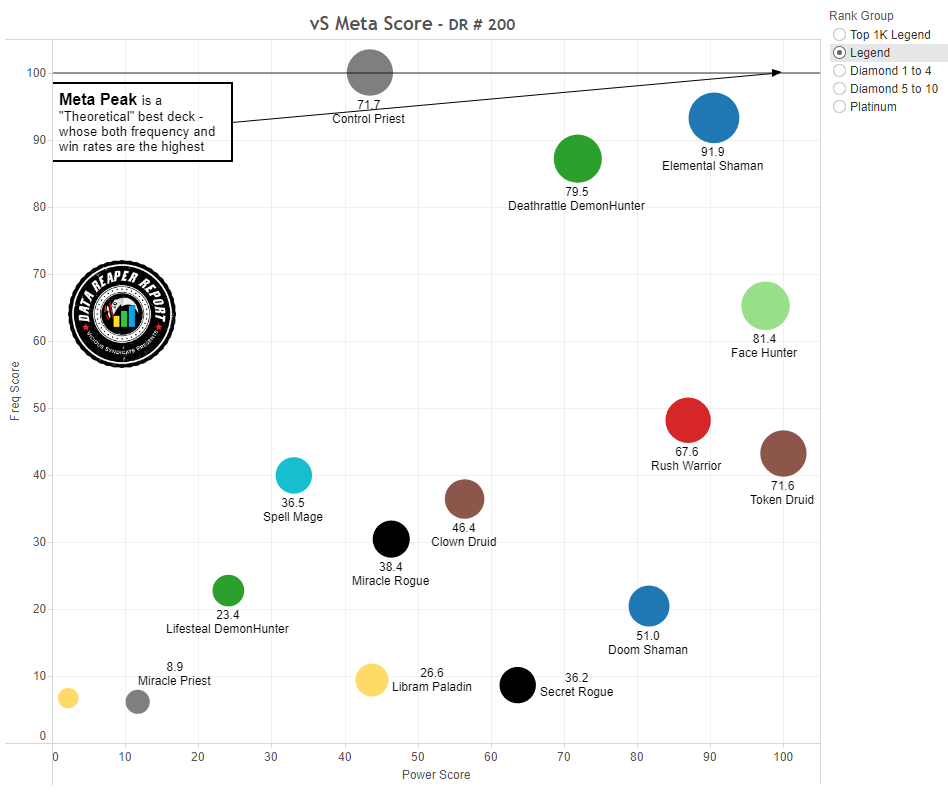 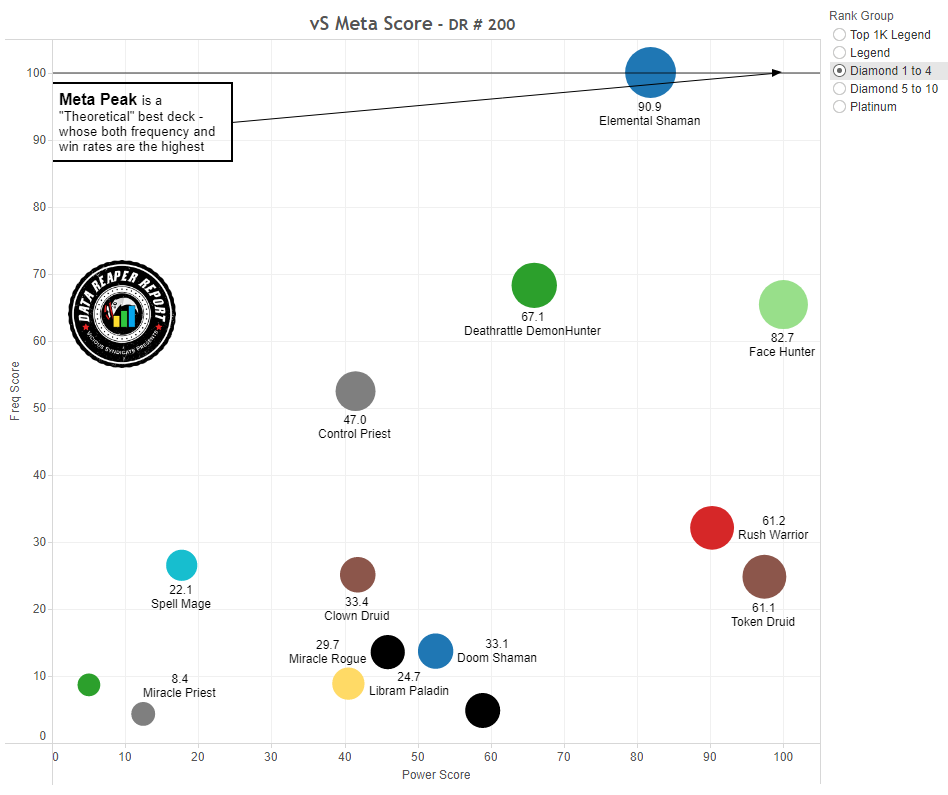 Priest is imposing its will on the top legend meta, and its popularity has reached a point where dramatic developments are likely to occur within Control Priest.

Before we get to the dramatic developments, the Yoink variant looks perfectly built. This is the Priest deck you want to run through most of ladder, as the Cabal Acolyte package excels against the highly popular Elemental Shamans and Deathrattle Demon Hunters, and is generally pretty useful in other matchups too. This build isn’t too flexible though and doesn’t appreciate situational techs such as Illucia.

But what is happening at top legend? The prevalence of the mirror has led to the unthinkable: C’Thun is now a genuinely good card in the Vanilla build! We’ve found that Sethekk Veilweaver’s effectiveness has dropped in this matchup, and you’re far better off running the Old God if you’re looking to gain a significant edge in the matchup (C’Thun vs no C’Thun is close to a 60-40 matchup). C’Thun’s role in Priest reminds us of Archivist Elysiana’s role in Control Warrior back in Rise of Shadows: A mirror tax.

Another card we’ve found to be effective in this variant is The Nameless One. While we wouldn’t consider it to be core, it looks pretty valuable in several matchups. It’s amazing in the mirror, excellent against Rogue/Warrior and provides a strong answer to Deathrattle DH in the absence of Acolyte. It can be replaced by Illucia if you’re running into many Lifesteal DH’s, which is the only matchup she’s a game changer in.

With Priest rising in popularity, the incentive to run Felsteel Executioner in Deathrattle Demon Hunter grows. While their incorporation has been awkward so far, the weapon started to get added to the threat-dense build we’ve been featuring for the last couple of weeks. This seems to be a better approach rather than increasing aggression through Sneaky Delinquents, and there’s no need to worry about running more 4-drops (Raging Felscreamer is pretty weak).

The cards to make way are Mankrik and Vectus. Felsteel Executioners help you gain significant percentages against Priest (Over 5%), and are also net positives against Rogue, Mage, and Lifesteal DH. They are negative assets against Shamans, Rush Warrior, Token Druid, Face Hunter, and the mirror. Take that into consideration when deciding between the two options.

Shaman is the one class standing between Priest and total domination, with both of its archetypes exhibiting good matchups into the emoting menace.

The novel build of Doom Elemental Shaman we’ve featured last week ended up looking perfect (!). For reasonings regarding card choices, just check last week’s Shaman section. What we’ve said in theory proved to be accurate in practice. We wouldn’t change a single card in this build, and it looks very competitive with Whack Elemental Shaman.

In the Whack variant, we’ve noticed Inara rising in play and looking superior to either Alex or Al’Akir. Turns out that good card is good.

Token Druid is seeing a rise in the popularity of Guidance, and the card looks pretty good. In fact, it might be worthwhile to explore cutting Soul of the Forest completely for the 1-mana spell once again. You may call us crazy and note the rise in Control Priest, but what’s interesting is that making this change doesn’t seem to worsen the Priest matchup by any significant number. It might be that Guidance’s reload potential is just impactful, and more useful in cases where the Priest can consistently clear your board and deny Soul of the Forest value.

When you consider that Guidance is far more useful in many other matchups, it appears to be winning out. These final slots appear to be flexible, and you could also go for the 1-for-1 split if you remain undecided. Whatever you do, just don’t keep Guidance in the mulligan.

Rogue’s story during Wailing Caverns is uneventful. Nothing changed about its archetypes, and its standing in the meta is middle-of-the-road. Many players enjoy playing Miracle Rogue, and it seems to be a very balanced deck with an engaging playstyle that doesn’t draw much ire. Secret Rogue is a viable alternative, while Poison Rogue has fallen off after failing to hold on to its edge against Priests.

Rush Warrior is a powerful deck with an excellent matchup spread that is mostly blemished by its Control Priest matchup, but thankfully there are ways to adjust to Priest’s popularity at higher levels.

Both the Vanilla build and the Saurfang build deliver in their roles. The Saurfang build improves Rush Warrior’s performance against Priest, making it only slightly unfavored. The extra card draw is huge here. It’s also better against other Warriors, Mages and Warlocks (decks that attempt to run you out of resources). The Vanilla build is stronger against Druids, Hunters and Shamans, since you want to fight for board against them more aggressively. These variants perform similarly against Demon Hunters and Rogues.

There’s been some hype surrounding experimentation with Moonfang and Resizing Pouch in Face Hunter. We’re here to shut it all down. After looking into both cards, they don’t look like good ladder choices and we don’t see a good reason to deviate from the featured build.

There’s also been some experimentation with Deathrattle Hunter. This deck looks very, very bad. Face is the only place for the class this expansion.

Spell Mage’s only role in the current meta is to kill Priests. There is no other competitive reason why you’d queue it on ladder. Many players at lower ranks play the deck because they clearly enjoy it, but if you’re focused on winning, there are better decks to run (though it isn’t a ‘bad’ deck).

So, the next time you queue into a Spell Mage drawing Flow on 2, just remember their service to the rest of the Hearthstone meta.

There are some developments that indicate the Paladin class could still be competitive. Refinements in Libram Paladin have led to a rise in its win rate, putting it close to the 50% mark at most rank brackets. We think the deck can even improve further, so the class might not be as dead as it looked last week.

The big changes within the archetype involve cutting First Day of School and running a 3-drop resource package consisting of Scorpid and Naralex. Along with double Libram of Judgment, the Priest matchup isn’t as bad as it’s perceived to be. Scorpid also encourages the return of Animated Broomstick to the deck.

So, if you miss being a Paladin-playing hipster, this could be your moment.

Gul’dan’s best position in the current meta is resting his head on the left side of Illidan’s hand.

Can anyone stop Control Priest’s surge at higher levels of play? Will the mirror poison pill of C’Thun be the one to drop Anduin’s smug face? This report was largely focused on how to counter the deck that poses the biggest threat to the competitive Hearthstone meta. Perhaps not as much in terms of pure game balance, but competitive players’ sanity!

As data analysts, we find Priest to be fascinating, and much of it has to do with its psychological impact. It’s one thing to cause the opponent to concede on turn 1, as Quest Rogue has done in the past due to the prevalence of its polarizing matchups. But, it’s another thing entirely to cause these early concessions in completely winnable matchups.

Control Priest doesn’t just beat players. It demoralizes them in ways we may have not seen before. Not with a polarizing matchup spread or an utterly dominant overall win rate, but with… finesse.