Welcome to the 202nd edition of the Data Reaper Report! 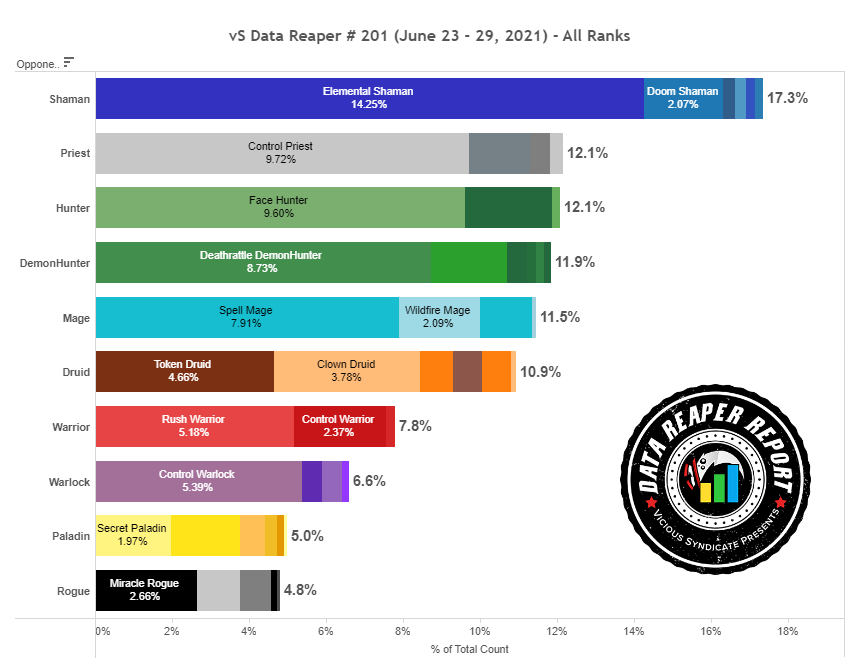 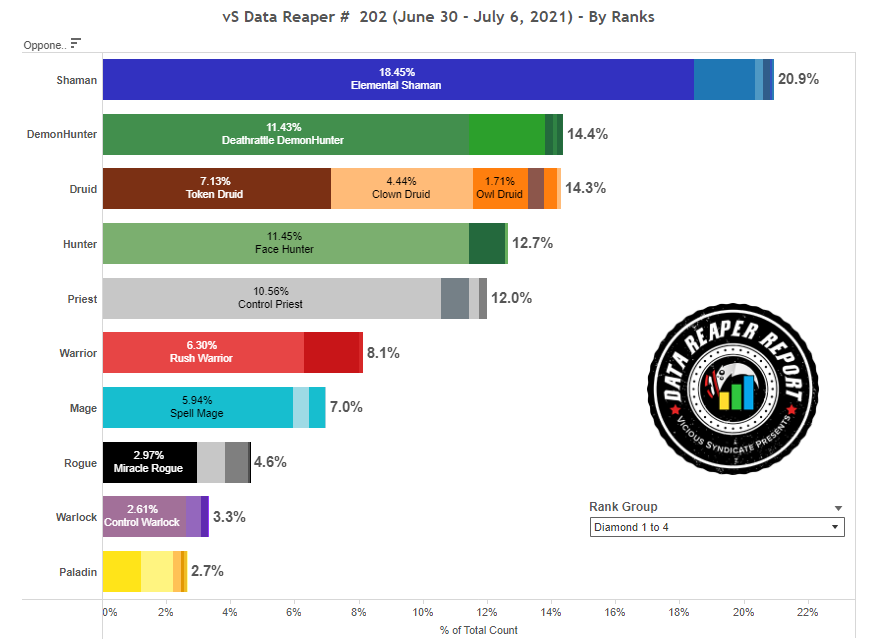 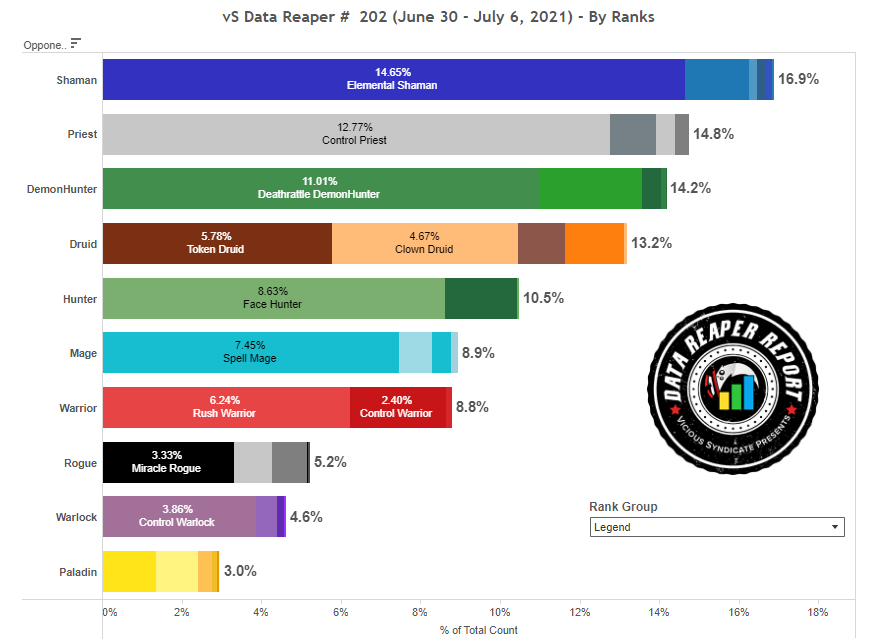 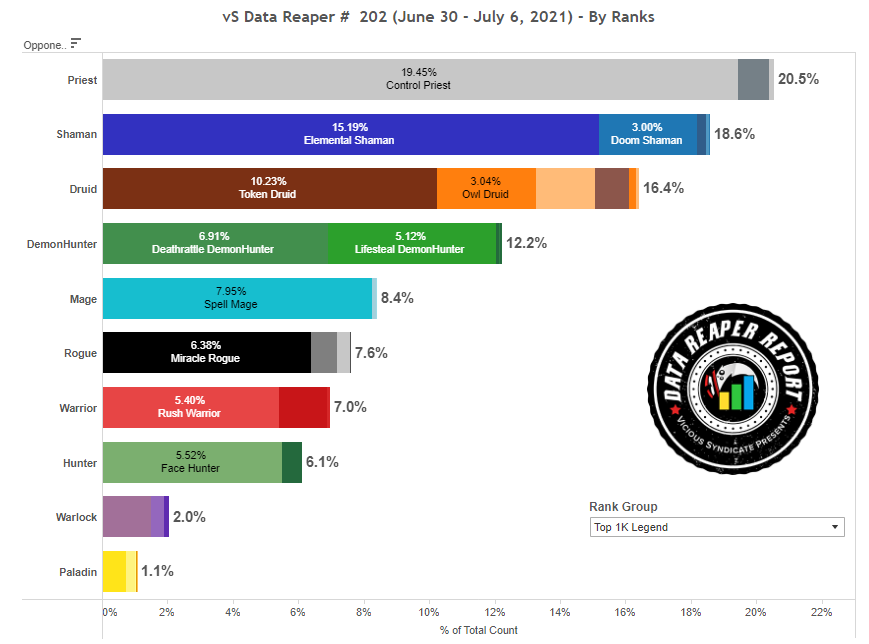 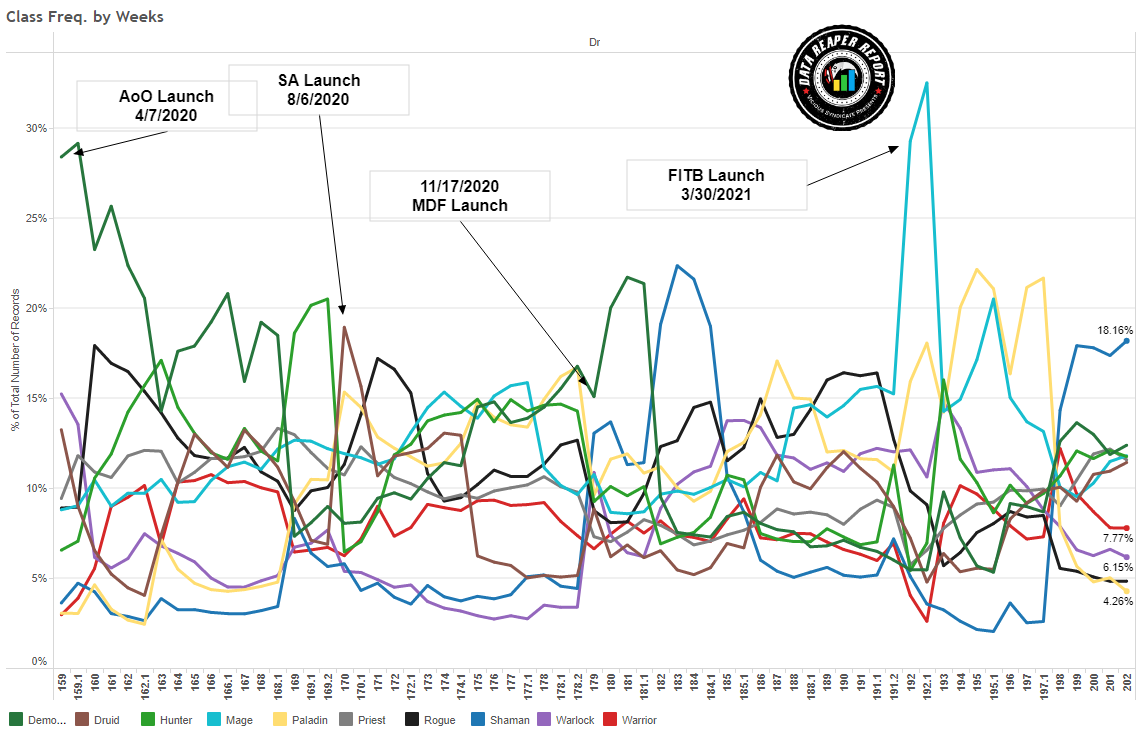 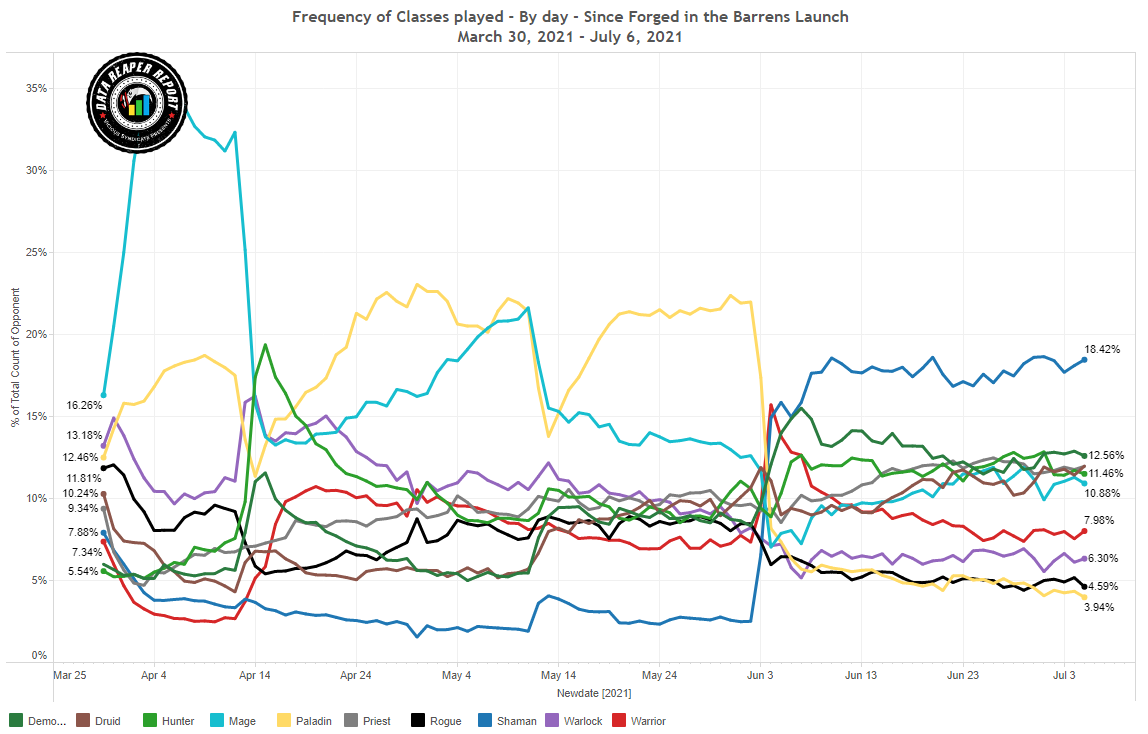 A small decline in Priests indicates that the class has reached its peak and is unlikely to become more prevalent than it already is. Control Priest’s ceiling at top legend is the 20% mark, though it’s obviously more popular the higher you climb. Elsewhere, Priest is closer to 10% of the field.

Shaman’s numbers keep growing, and it’s closing in on Priest at higher levels of play, where it is the biggest factor keeping Anduin in check. Elemental Shaman is everywhere on ladder, while Doom Shaman is slightly declining, taking a clear backseat in favor of the tribal archetype over the last few weeks.

With the start of the new season, we can notice growth in Token Druid’s numbers on the climb to legend, though the deck remains more popular at top legend. The other trend is a more noticeable presence of Owl Druid there, with a few players following up on Jambre’s success with the deck.

Warrior is seeing an uptick in play at top legend, with both Rush Warrior and even Control Warrior rising. Players were a bit reluctant to play Warrior because of Priest’s prominence, but new deck developments may have sparked new interest in the archetype.

Lifesteal DH seems to have peaked in play last week, and now it’s come back down. Deathrattle DH is another deck that saw new developments and therefore attracts slightly more interest this week.

Other classes haven’t seen new developments, and this stagnation has led to the decline of most of them at top legend, with little changes at other rank brackets. We’re letting you know in advance that we won’t say much about Mage, Rogue, Hunter, Paladin or Warlock. For them, this means “business as usual”, as we’d rather be concise when we can and not repeat ourselves one week after another. 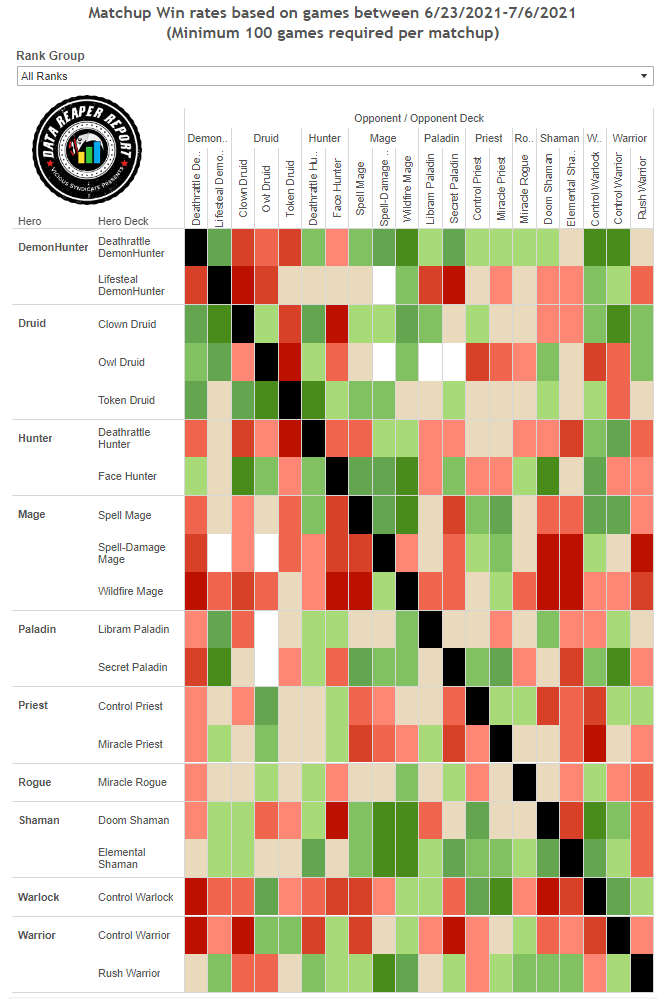 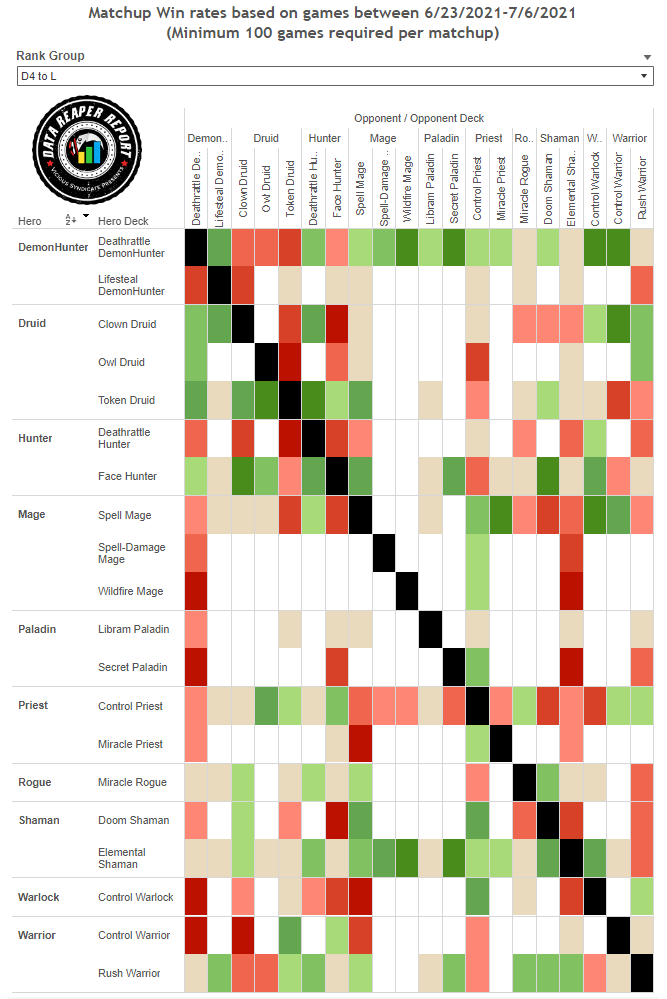 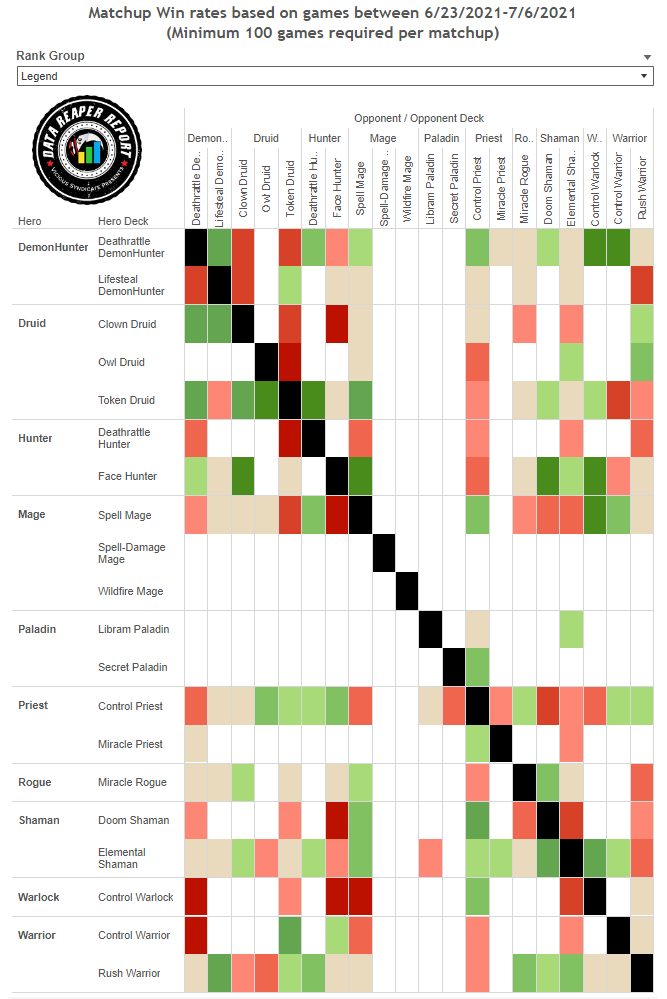 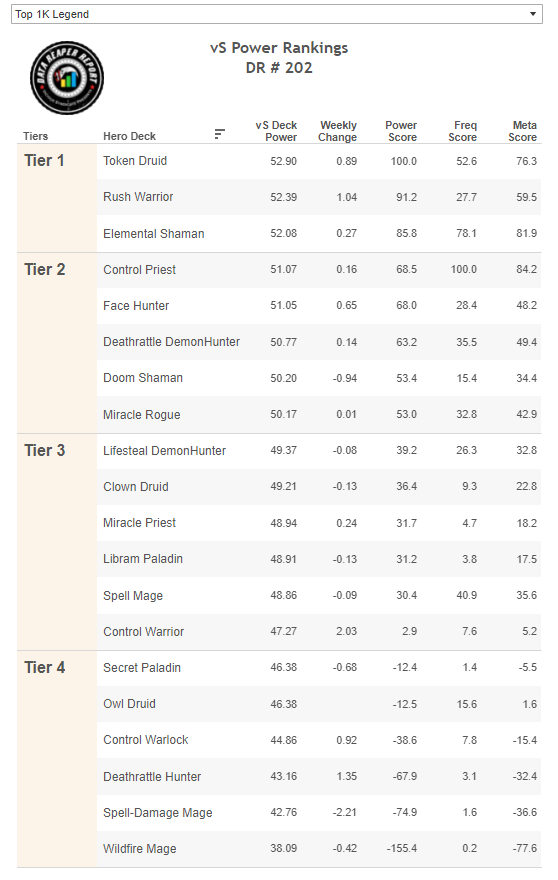 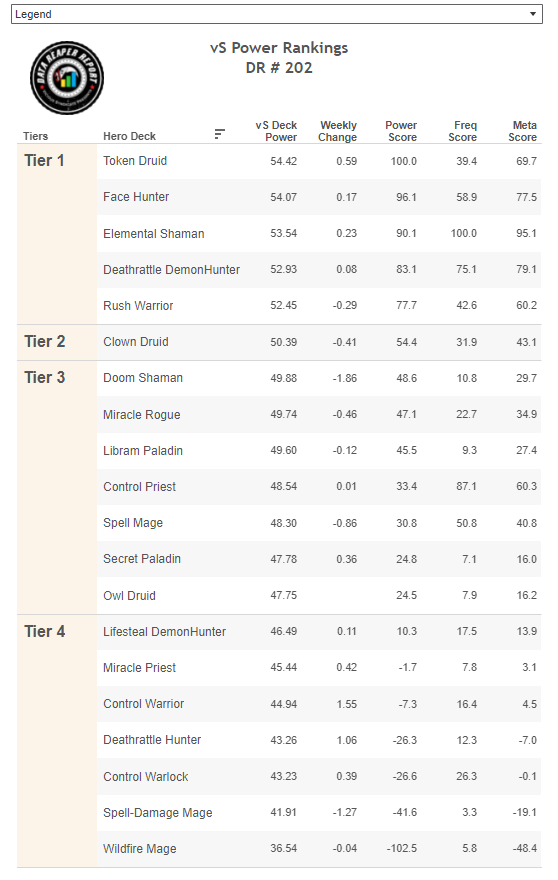 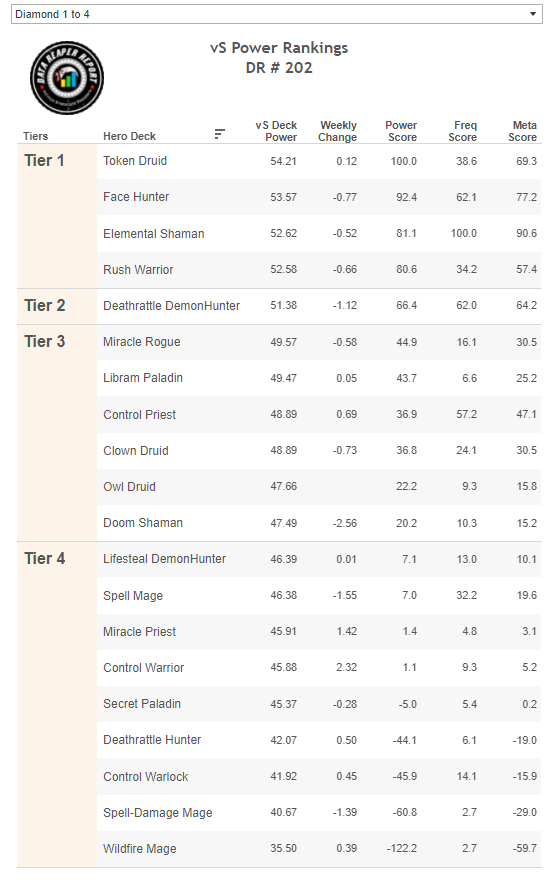 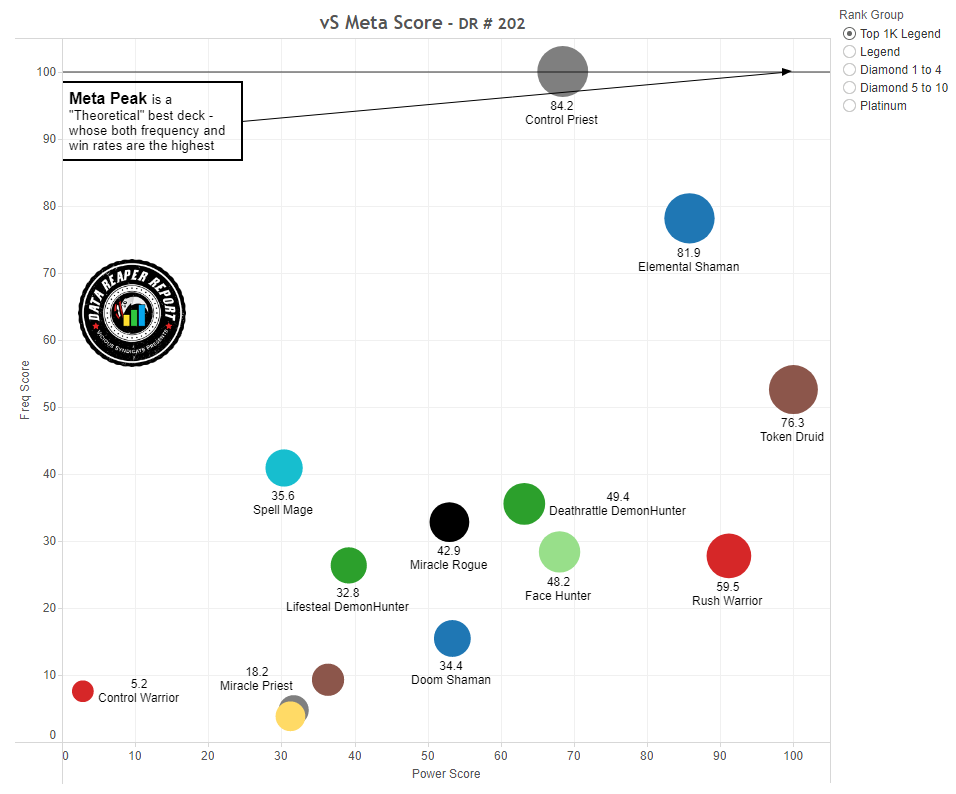 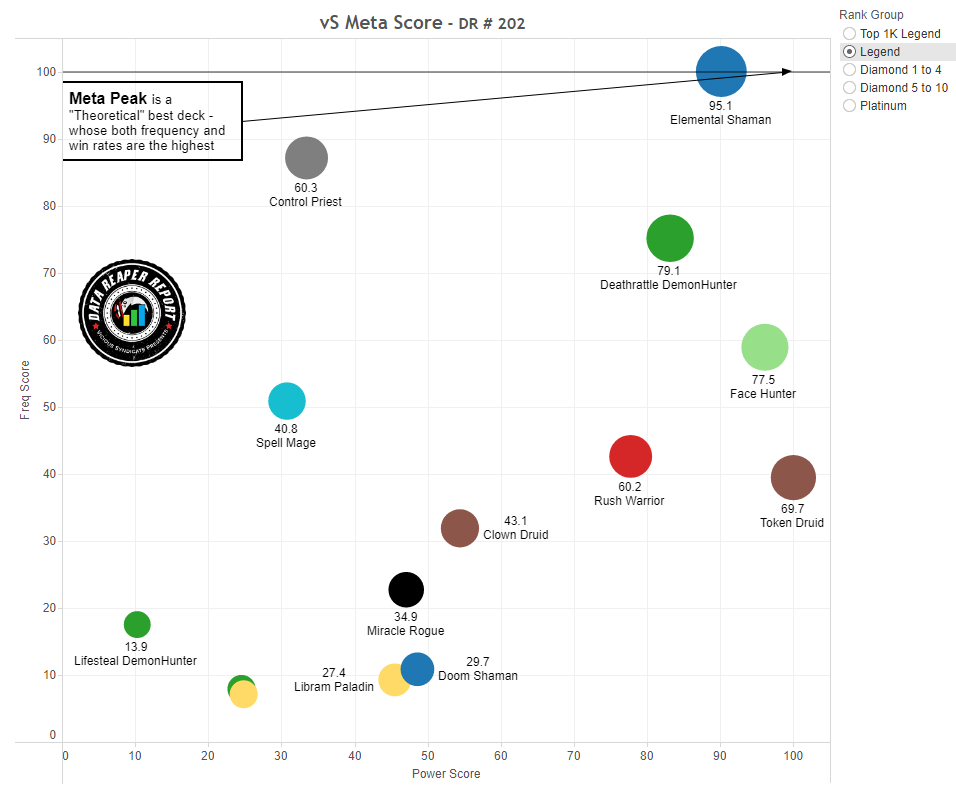 Priest builds seem to have finally stabilized. The performances of Control Priest’s two main variants have also remained steady. The Sethekk build works better at higher levels of play, the Yoink build is better outside of legend.

The Sethekk build wants to run 31 cards, and the main decision is whether to drop Mutanus, Illucia, Naralex or a Wandmaker (the latter has gotten popular lately). Illucia is the most situational card of the four, so her omission works best unless you see a lot of Lifesteal DH.

Shaman’s in a great position in the meta. At all levels of play, it is a strong ladder choice. High-level players have embraced the class after realizing it is the best option in the format to counter Priest. We’ve mentioned last week how to best utilize the three decklists featured. They all work well. Play Doomhammer to beat Priest/Warrior/LSDH. Play Whackhammer to beat everything else.

While Token Druid continues to display dominance through ladder, a new archetype has grown in popularity thanks to the deckbuilding efforts of Jambre. While some individuals have shown results with it, success with Owl Druid doesn’t seem to translate to the rest of the player base. Its problematic matchups against Control Priest and Token Druid are an issue, though it does seem to perform well against most initiative-focused decks thanks to its board swing potential.

We recommend not running Yogg-Saron in the deck. It might be a necessary comeback tool in Celestial Druid, but Owl Druid wants to find Malygos as soon as possible, which means you want to draw it off Taelan every time. Primordial Protector is a nice tutor for your Cenarion Ward, a card that is a proven stabilizer in Clown Druid as well.

Rush Warrior displays the biggest breakthrough in an otherwise solved meta with the re-emergence of the Watcher variant. Written off after they were nerfed early in the expansion, recent results suggest that both Far Watch Post and Mor’shan Watch Post could now be sleepers. They’re exceptionally strong in many matchups, to the point the Watcher variant could prove to be superior to the Vanilla build.

This variant was popularized by WuLing, and we recommend one card change from his original build. We don’t think Kargal is worth including. The Watch Posts are good by themselves and Kargal is very rarely a more useful finisher than Troublemaker. ETC is very likely still better. Naralex can be swapped in for one Tent Trasher, though it’s a little worse in this variant compared to the Vanilla build.

One small development in Deathrattle Demon Hunter is the utilization of Far Watch Post, which was likely driven by the success of Watch Posts in Warrior. A Watcher variant is worth experimenting with in DRDH, though Mor’shan seems more difficult to fit as it requires us to cut Eye Beam (we generally don’t want to do that).

The normal build remains the same. Run the featured list through most of ladder. Add Felsteel Executioners at top legend.

This week sees the return of WATCH POSTS. Yes, these menacing towers that defined the early Barrens meta may have been nerfed, but they might still be strong enough to make their mark on the late Barrens meta.

The addition of Far Watch Post and Mor’shan Watch Post has positively contributed to Rush Warrior’s performance at top legend, where this trend is most common. FWP is still very powerful on turn 2, and though easier to remove than before, is still extremely punishing if left alone. MWP is still fantastic in many matchups, as it is so disruptive to the opponent’s development of the board.

While the synergy in Rush Warrior may not seem intuitive due to their inability to attack, the deck’s game plan is all about pushing the opponent off the board, and these cards significantly contribute to this plan. They’re also deceptively strong with Conditioning, which helps them stay useful later in the game.

Credit to WuLing for the late-expansion discovery, and giving us something to discuss in these somewhat stale times.