Welcome to the 207th edition of the Data Reaper Report! 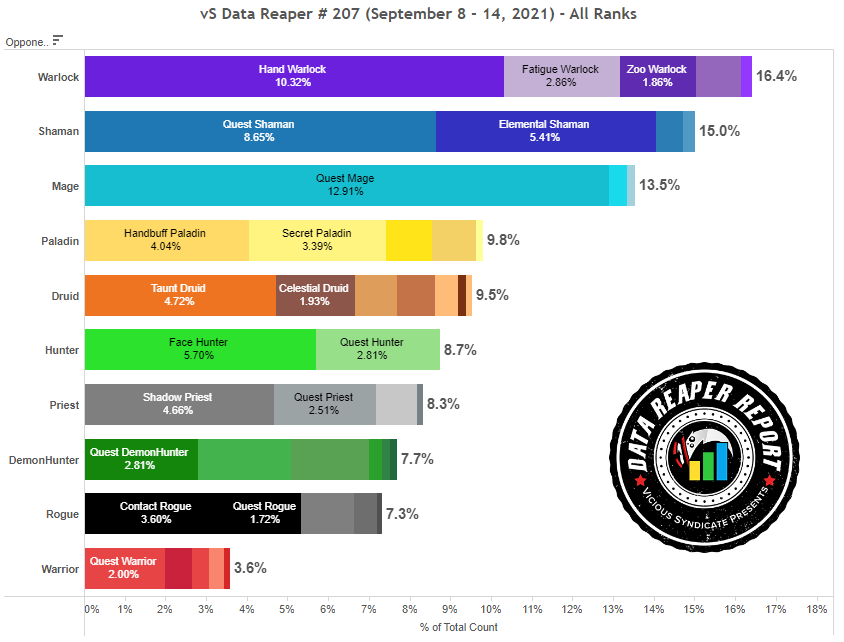 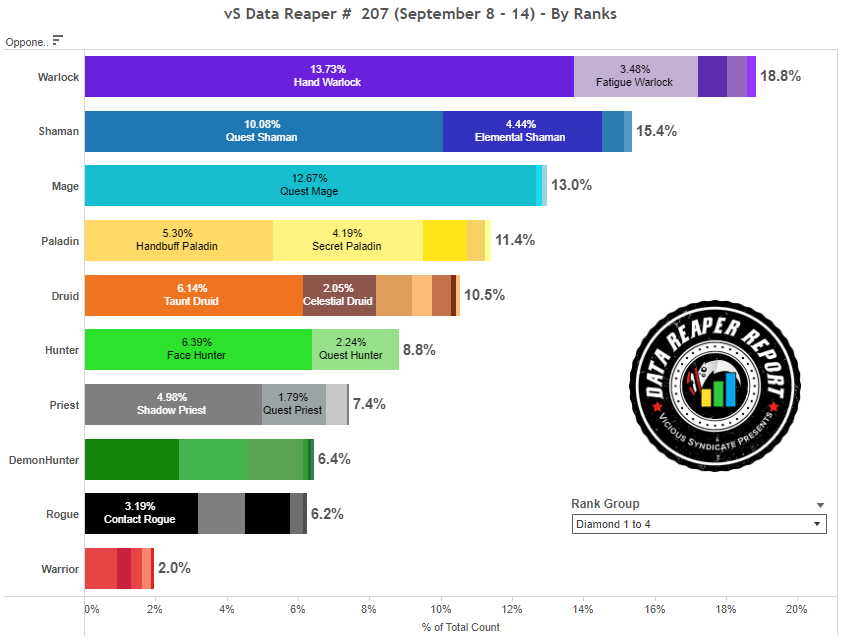 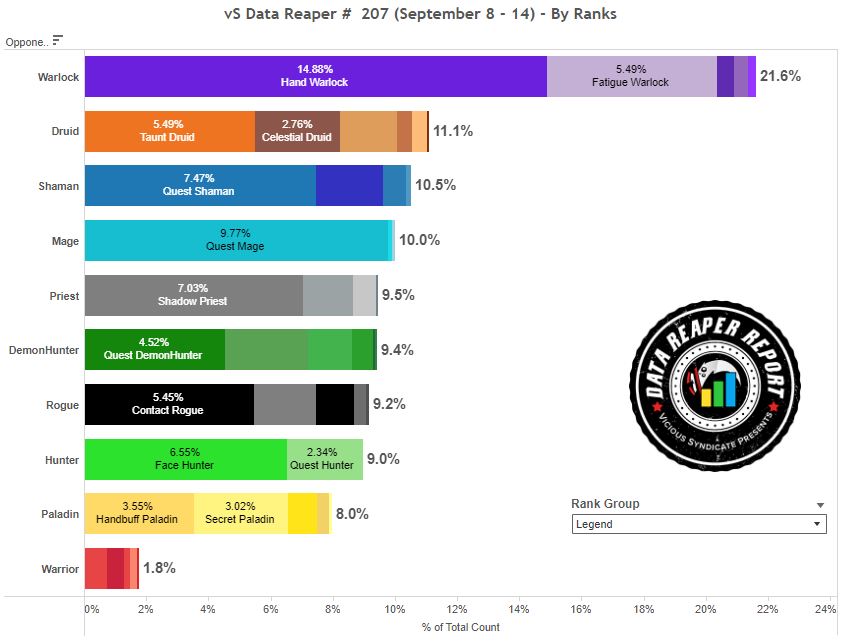 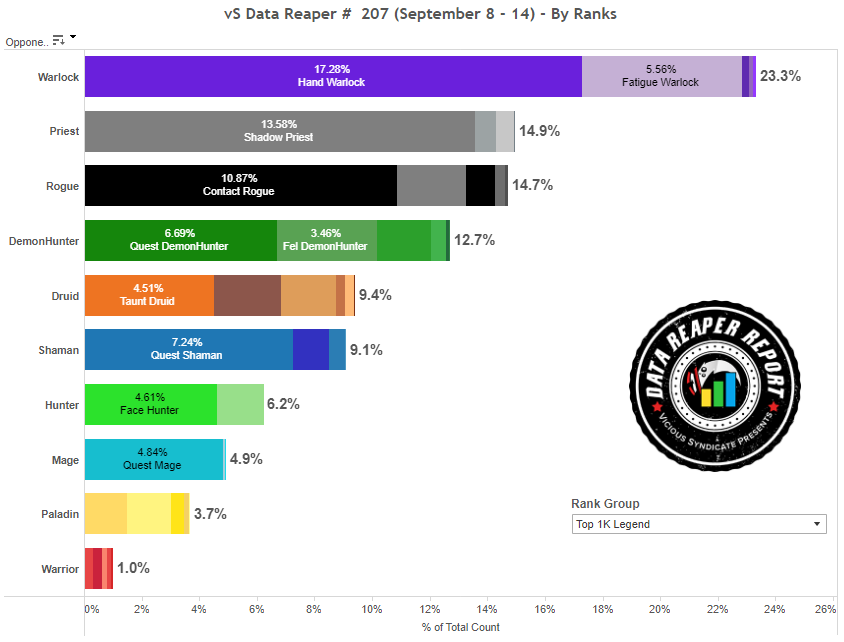 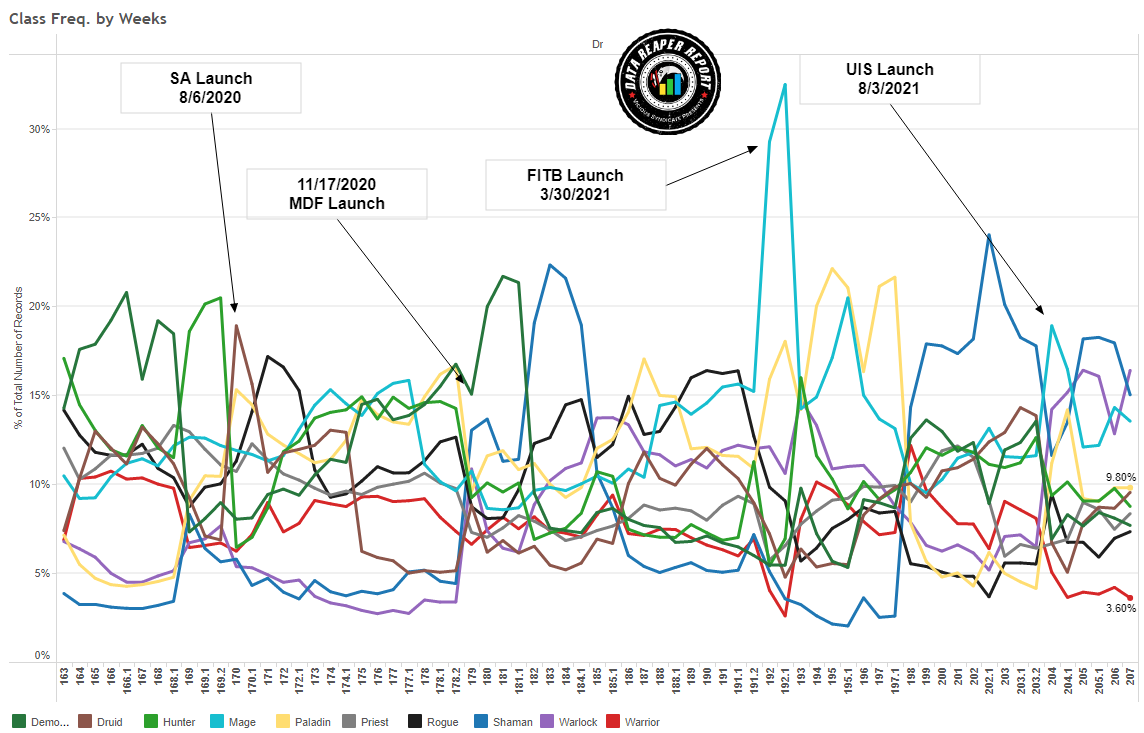 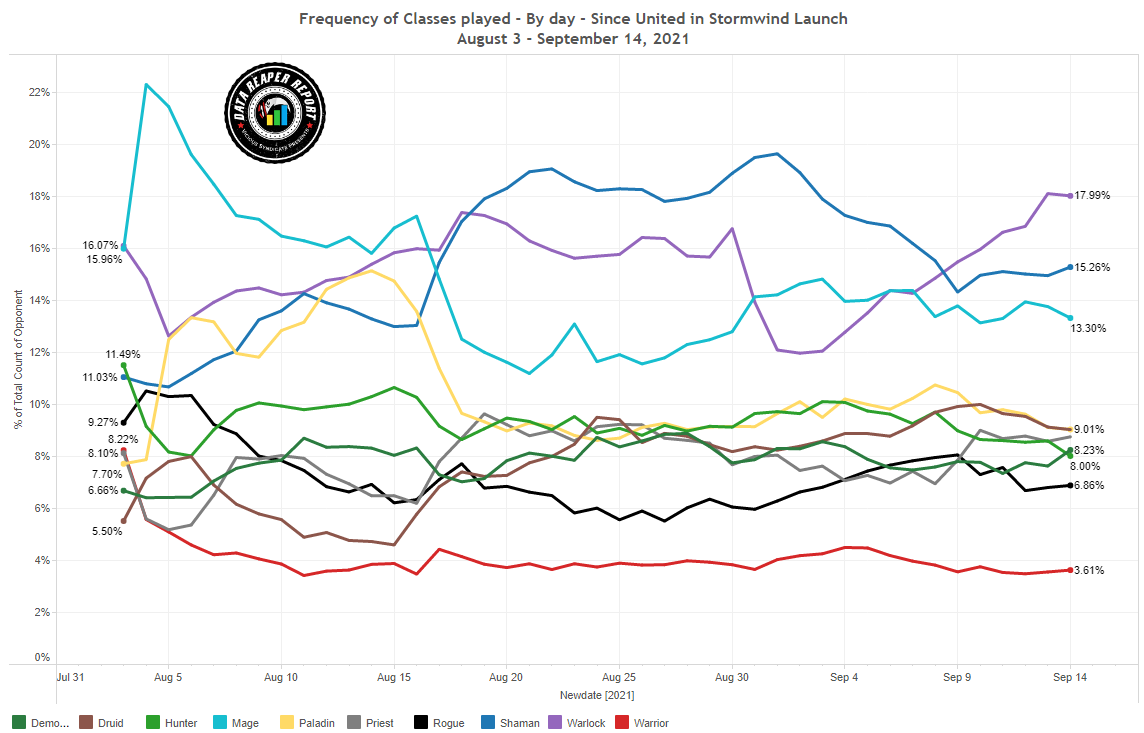 Handlock has slightly risen in play over the last week, but it’s the rise of Fatigue Warlock that has led to a more significant increase in the class’ presence. This archetype has gone through a lot of development and is exhibiting a diverse set of builds.

Shadow Priest has spiked in play at top legend after its dominant performances both on ladder and in tournaments, with players now recognizing how powerful this deck is across all levels of play. What’s interesting is how slow players are to pick up on this deck at lower ranks, and we suspect a lot of it has to do with how difficult it is to play, as we’ve discussed last week.

Contact Rogue has picked up slightly more play but seems to have saturated at top legend. No changes in Quest or Poison Rogue. The class is far less visible at lower ranks.

There was unfortunate timing with regards to Demon Hunter. Lifesteal Demon Hunter seems to be making a comeback at top legend, but its spike in play was only beginning as we closed this week’s database. We will still discuss its performance for the 36 hours after closure, but we won’t be able to show data related to it in this report. There isn’t much movement in the three other notable archetypes of the class.

Shaman has declined in play, with Quest Shaman players likely losing their patience with the Warlock matchup. The Doomhammer variant sees a bit of play, but the archetype mostly consists of the standard approach.

Taunt Druid keeps steadily rising in play, and its refinement phase looks close to being complete. There seems to be a shift away from Celestial Druid and into Anacondra Druid, which makes sense considering the latter’s superior showing on ladder.

Face Hunter has declined, not necessarily because it’s weaker, but because of its loss of priority. As we’ve said last week, there isn’t a competitive reason to play Face Hunter over Shadow Priest if you’re interested in burning down Warlocks, other than the fact that it is more forgiving to play. This becomes very visible as you look through the ladder brackets. Face Hunter is still more popular than Shadow Priest outside of legend, but Priest completely takes over at top legend.

Mage has slightly declined across ladder, though a better phrase to describe its presence at top legend is a dramatic collapse. Quest Mage will likely remain a very popular choice regardless of how well it performs.

Warrior is supposedly one of the classes in Hearthstone. 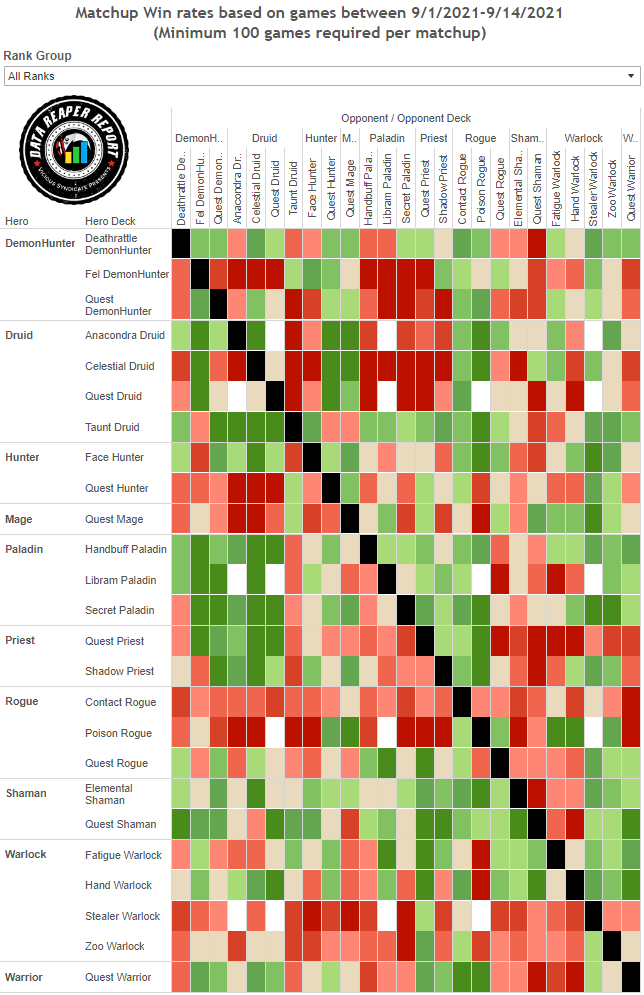 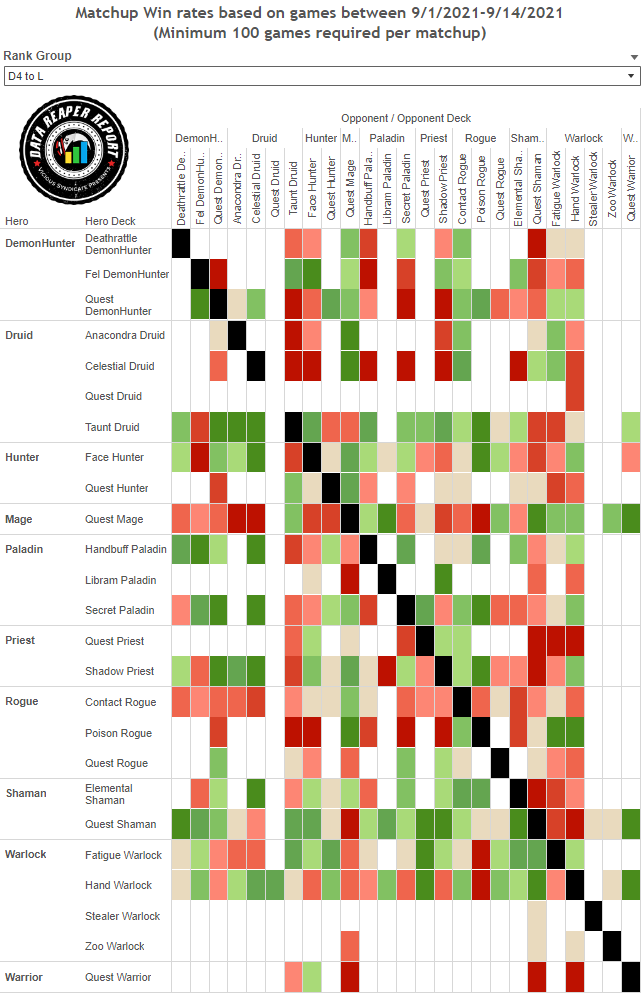 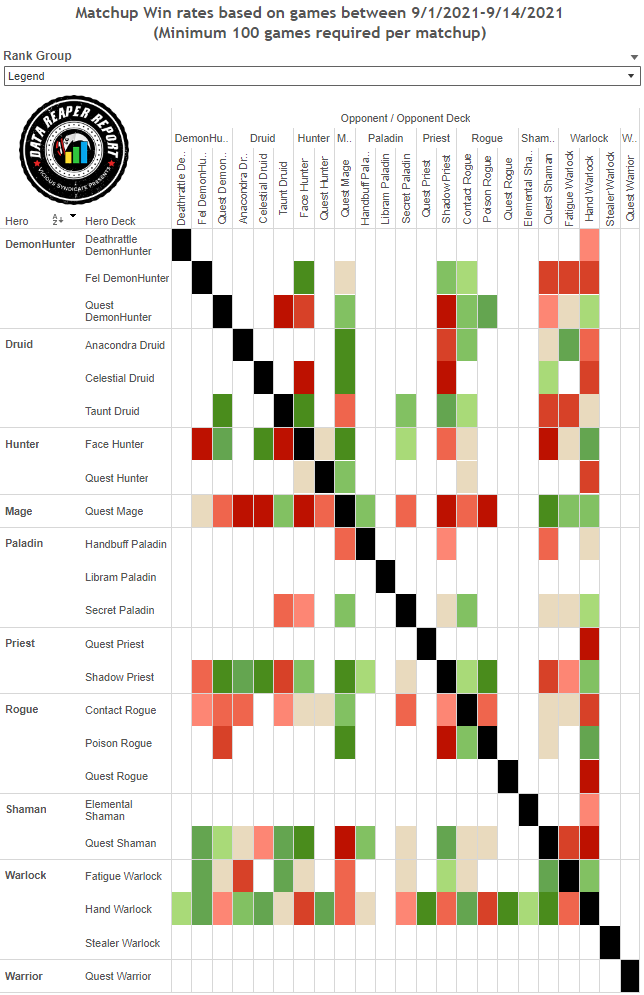 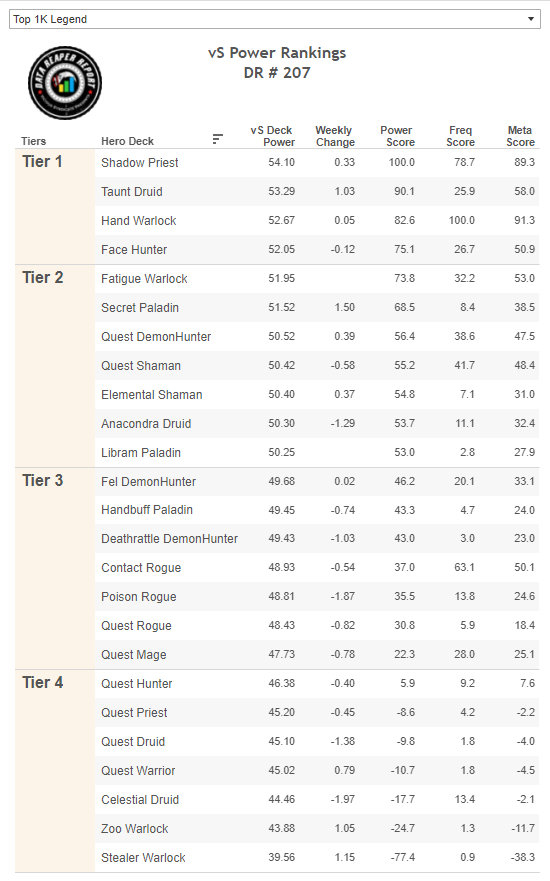 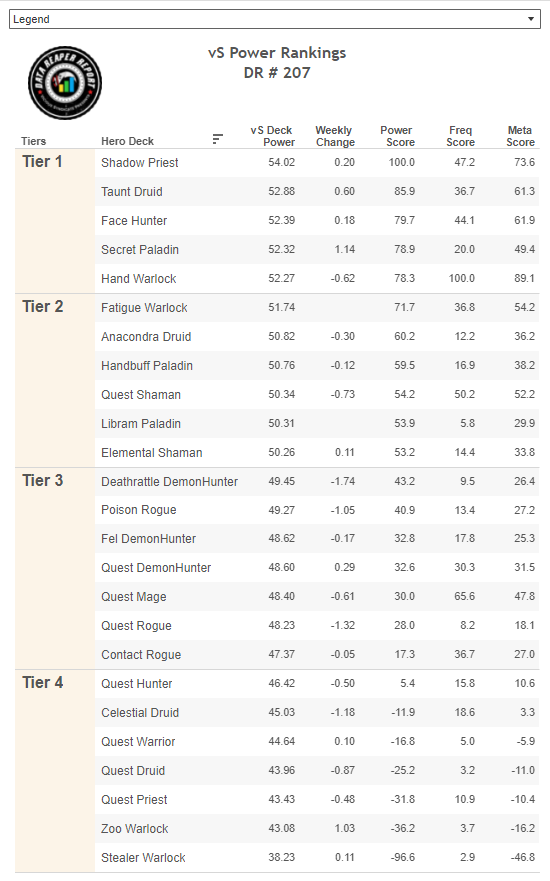 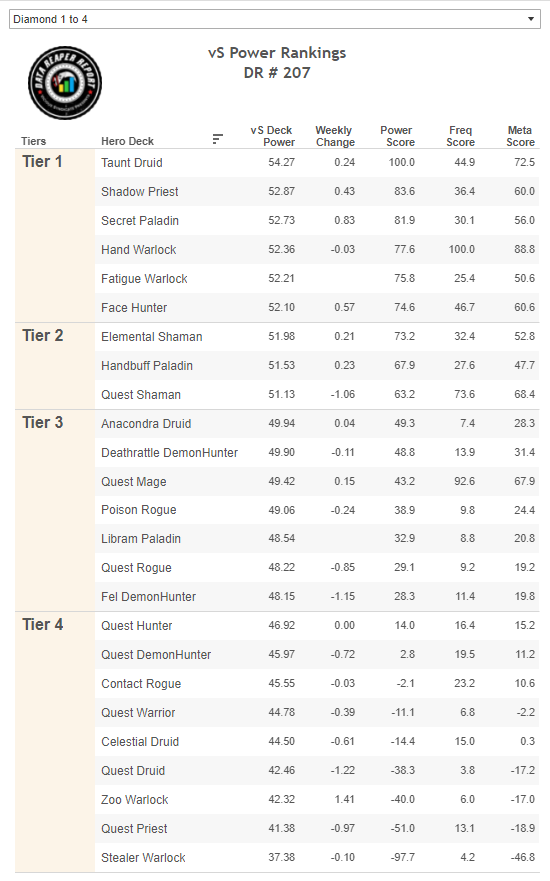 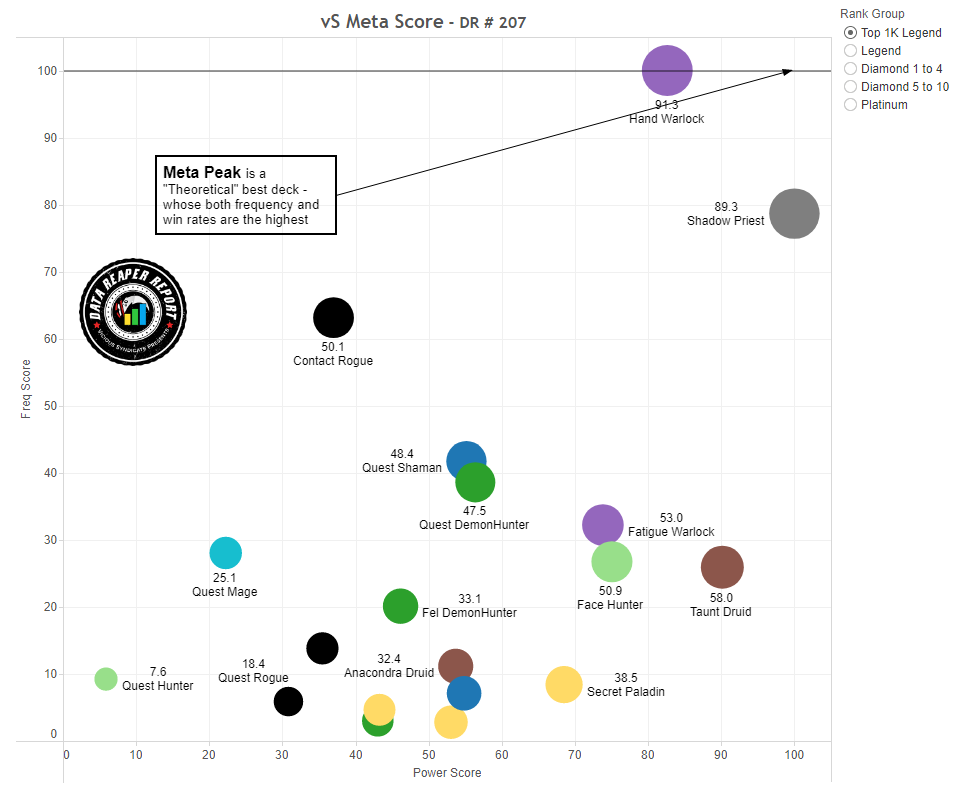 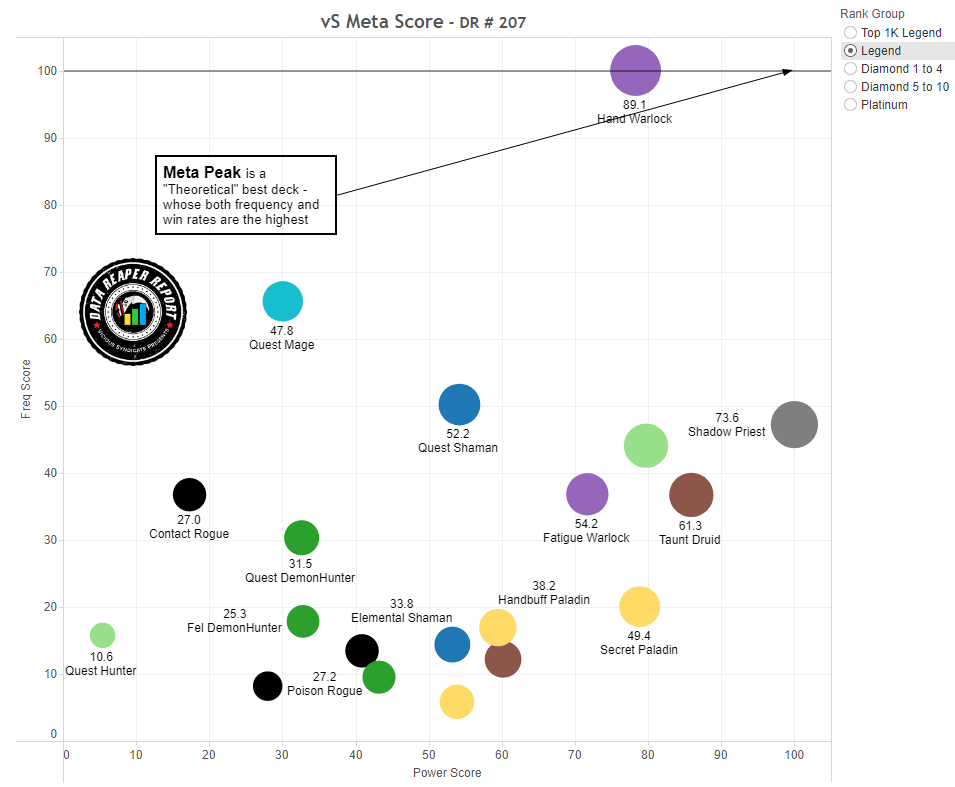 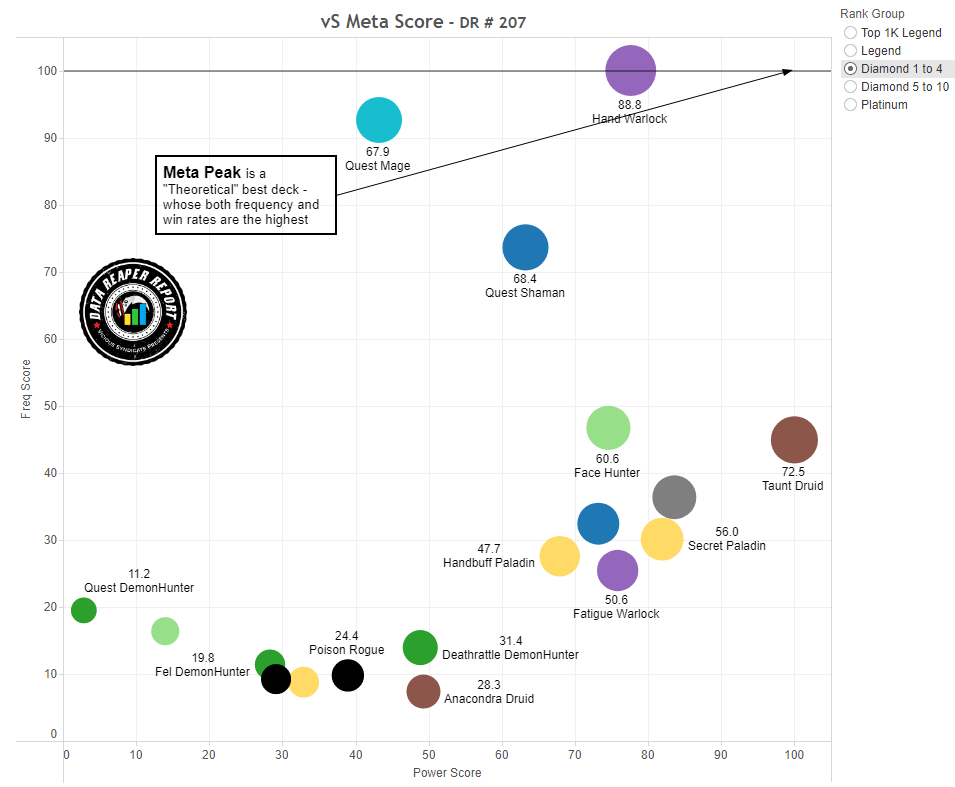 Warlock has been the most influential class in the format since the expansion’s launch, and it seems to continue to develop further.

The Rod build of Handlock looks like the clear way to go. We’ve evaluated several candidates for the 30th slot and found Battleground Battlemaster to be the strongest one. The rest of the build looks perfect.

Fatiguelock has gained further traction and cleaned up quite a bit, improving its performance by a significant margin since the moment it emerged. The additional week of data allowed us to reliably compare Unstable Shadow Blast with Cult Neophyte, and we advocate to run Blast. Neophyte is weaker in this deck since you don’t really pressure your opponent through the board, while Blast accelerates your win condition and provides you with another removal option. Don’t give up Armor Vendor or the Matron/Hand package, as they are way too strong.

Shadow Priest is nuts and is very likely getting nerfed in next week’s patch. We also may have found another way to improve it further: Peasant has begun to appear in the archetype and preliminary results indicate it performs exceptionally well, so we advocate trying it out over Chaplain and the 2nd Deceptor. Argent Squire is another 1-drop that looks pretty good in the deck, but is likely inferior to Peasant and we can’t fit both.

Contact Rogue has reached a very quick plateau in its performance, not attaining the heights some expected it to. We can now confidently say that Pen Flinger is significantly stronger than Foxy Fraud, as it helps activate both Octo-bot and Field Contact, which are your two most important cards.

Quest Rogue is underdeveloped. We may have found a way to fit both Battlemaster/Tenwu and Wicked Stabs in the deck, by cutting Prize Plunderer (not as strong in this deck as in Contact Rogue). This gives us a more explosive finisher that helps us close games against the challenging Warlock opponents, as well as other late-game strategies with strong defensive tools.

Not a lot is going on with Poison Rogue. You either try to maximize your performance against your prey or hedge a little for aggro decks with Plunderers.

Demon Hunter is a very diverse class that seems to be changing every week.

Quest Demon Hunter looks solidified in its build, but a new version of Lifesteal Demon Hunter running Final Showdown has popped up in the worst timing for this report to evaluate. Looking into some recent data that’s not in this report’s database, it seems to be a very promising approach that’s worth exploring further.

Basically, we swap the Lion Frenzy win condition with the Il’gynoth/Moa’arg/Felscream Blast combo. Glide helps us discount our combo pieces, while Guild Traders fill the role of Talented Arcanists (they’re slower early but can get crazy post-quest completion). Brutes still give us that early game blowout potential, but Felosophy has a dual role in copying Artificers as well. Thanks to jacked-up Immolation Auras and Felscream Blasts, we have better survivability tools against aggressive decks.

Fel Demon Hunter feels a little neglected now that Il’gynoth may have found his way back home to his original archetype, but we did find that Zai and Metamorphosis are interchangeable. You likely cannot run both alongside Il’gynoth.

Doomhammer Quest Shaman is worse than the standard build of the archetype on ladder, but it’s still a viable alternative if you dislike the deck’s normally polarized matchups and specific struggles against Warlock. We’re still a little unsure regarding what’s better between Lightning Bolt and Diligent Notetaker for the final two slots.

The standard build of Quest Shaman has looked perfect for a while. With Warlock nerfs looking imminent, Quest Shaman players are waiting in anticipation, but will the deck be left alone if Warlock gets significant nerfs?

We don’t think so, Thrall.

Taunt Druid continues to look very strong, and with not much attention given to it and the likelihood of some of its counters getting nerfed, it could get even better after the patch. The only way things could shift against it is if new strategies that don’t see much play today emerge to counter it.

We continue to recommend running Anacondra Druid over Celestial Druid on ladder, even though the Survival build of Celestial Druid is a clear upgrade on the C’Thun variant.

There is an option to run Claw Machine to tutor your Lady Anacondra in Ana Druid that seems to have success. The rule of thumb is that if Best in Shell isn’t important in a certain matchup, you’re better off running the 2nd Innervate and Claw Machine for greater late-game consistency.

Face Hunter is strong, there’s nothing new there. It tends to be weaker than Shadow Priest, but things could change after the patch. The Bonechewer package is doing solid work. We still prefer Felmaw and Neophyte over Wriggling Horror.

Quest Hunter is on the outskirts of the meta, but could it be on the receiving end of buffs? It’s definitely one potential buff candidate.

Quest Mage is not great, and balance changes to Warlock and Shaman could make it even worse, as its only role in the current meta is to counter them. The deck suffers from a very bad matchup spread against most of the field, so it’s hard to envision how it can possibly get better.

This wouldn’t sting so much if minion-centric strategies in the class didn’t look so horrid. Indeed, if there’s anything we should buff in the format, it’s a couple of Mage minions.

What’s this? Libram Paladin looking playable? This deck has popped up over the last week and looks surprisingly competitive despite not having the best matchups against the late game strategies that seem to define this format. But with expected nerfs to those strategies, we recommend that you watch out for this archetype.

Regarding its current emerging build, we didn’t have quite enough data to make reliable changes, but we’re mostly looking at Panderen Importer as a card that’s commonly played and can likely be improved on. Cards such as Far Watch Post and Ogremancer can be more helpful in the deck’s bad matchups.

We’ll be shocked if Warrior doesn’t receive buffs in next week’s patch. Yes, Rush Warrior seems competitive, but no one is willing to play it. Quest Warrior needs help. Other Warrior decks need a lot of help. That’s pretty much it.

So, we have a big balance patch next week, with both nerfs and also BUFFS. Based on the data, what can we expect from Team 5 as they look to set up the meta for an imminent mini-set while also addressing Wild format issues?

Warlock is getting nerfed. The question is to what extent. We think Mithril Rod is likely moving to 4 mana, but additional nerfs are harder to predict. Touch of the Nathrezim, Soul Rend, Backfire and of course, Demon Seed, are all likely nerf candidates.

Should Warlock be getting multiple nerfs, we think Shaman will also be addressed to prevent it from running away from the format. The most likely card to get hit here is Perpetual Flame, moving to 2 mana.

We think Illucia is very likely to get hit too. We are concerned about a simple mana change in this situation. We think the effect is extremely problematic in an aggressive deck, and we can see Illucia being played even at 5 mana. A rework might be a better solution here.

With regards to buffs, Warrior is the most likely one to receive them, but buffs are far more difficult to predict as they can be pretty much anything.

We’ve shared our thoughts with the class. Now it’s time for your opponents to do the same.

If you’re interested in picking up on a very recently surging deck at top-level play, Lifesteal Demon Hunter running Final Showdown is showing quite a bit of promise. Be careful though, this deck is just as hard to utilize as it was before.

We’re looking forward to seeing the notes and we’ll see you again on the other side of the patch!