Welcome to the 224th edition of the Data Reaper Report! 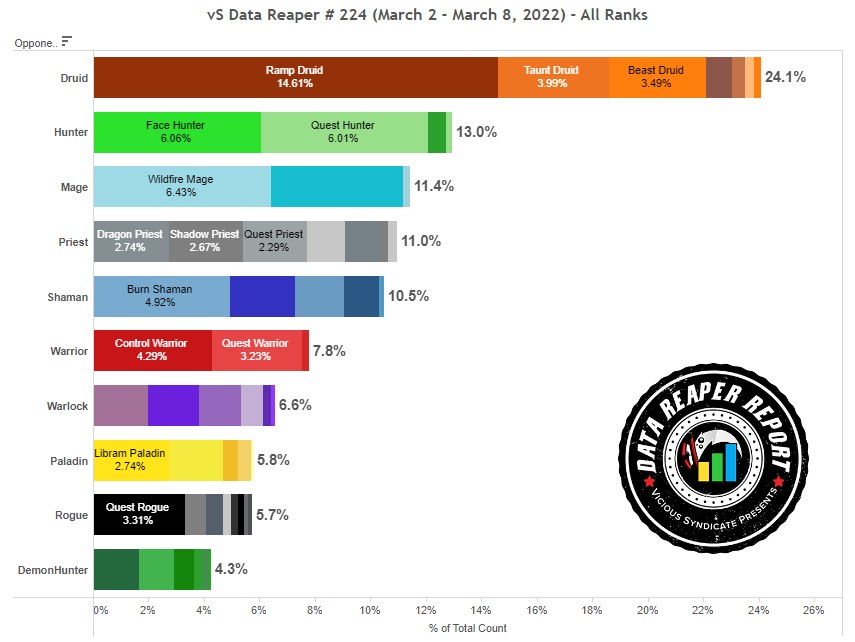 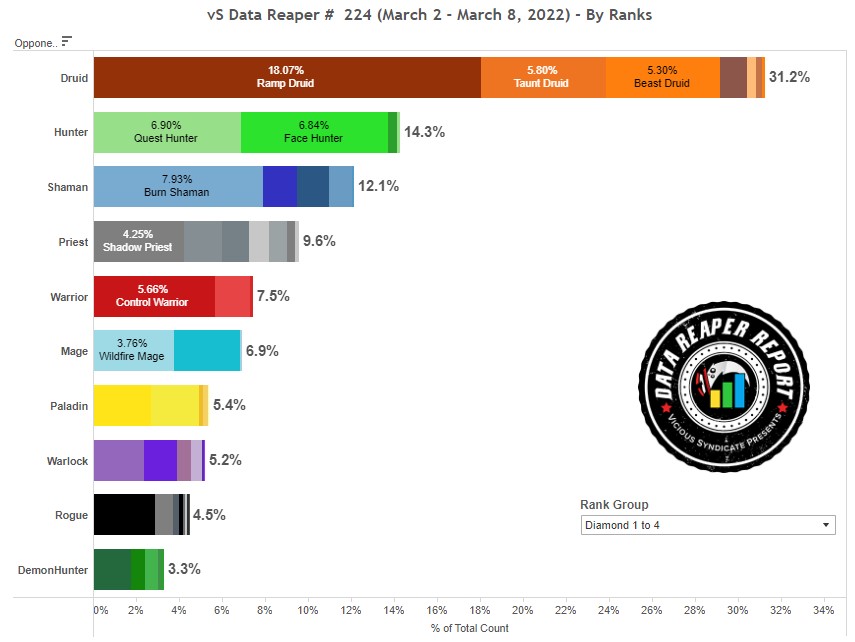 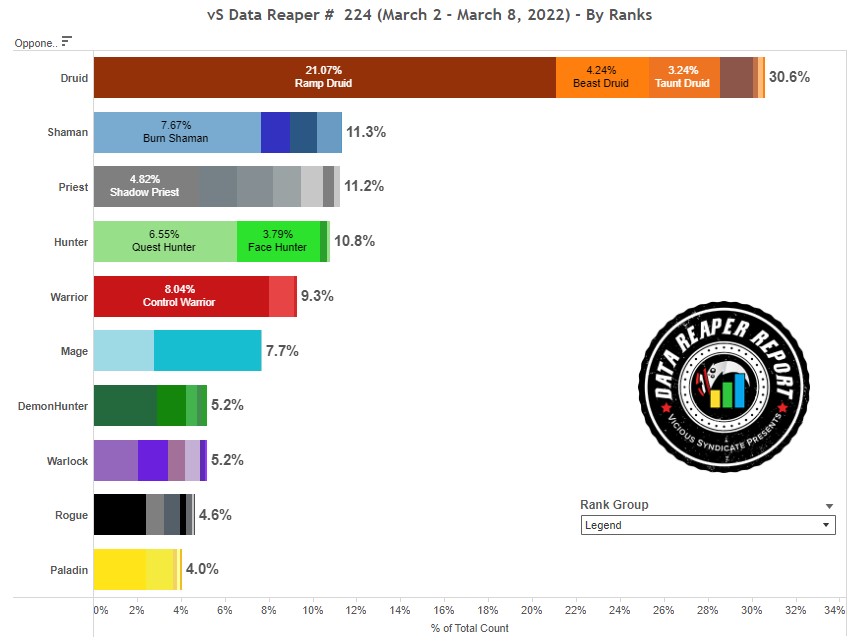 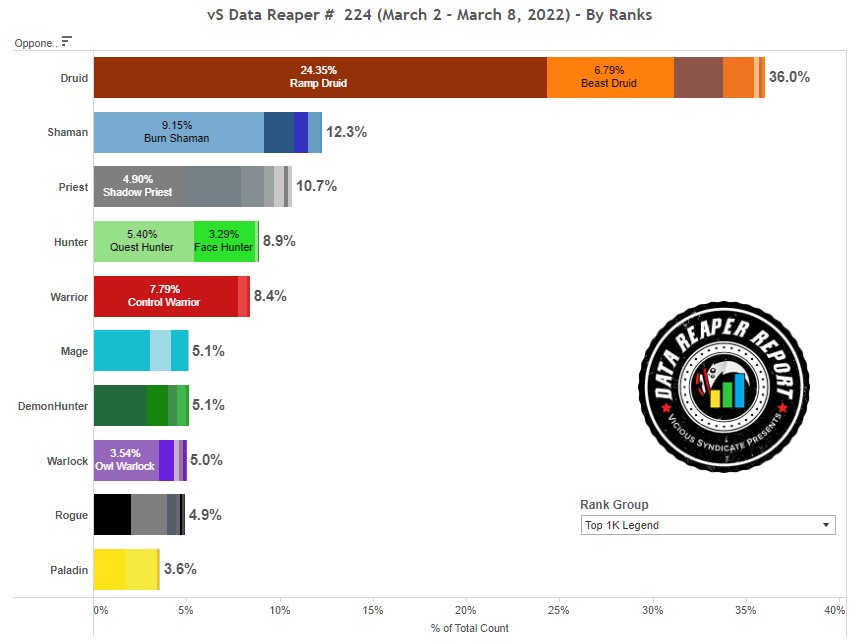 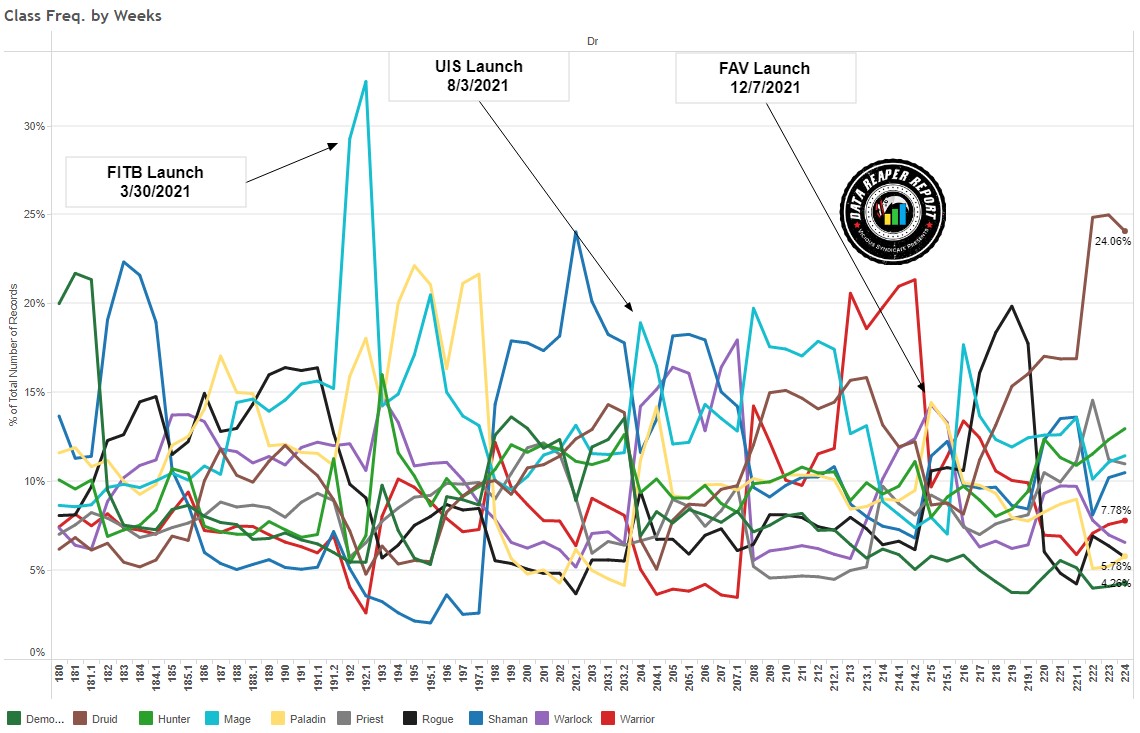 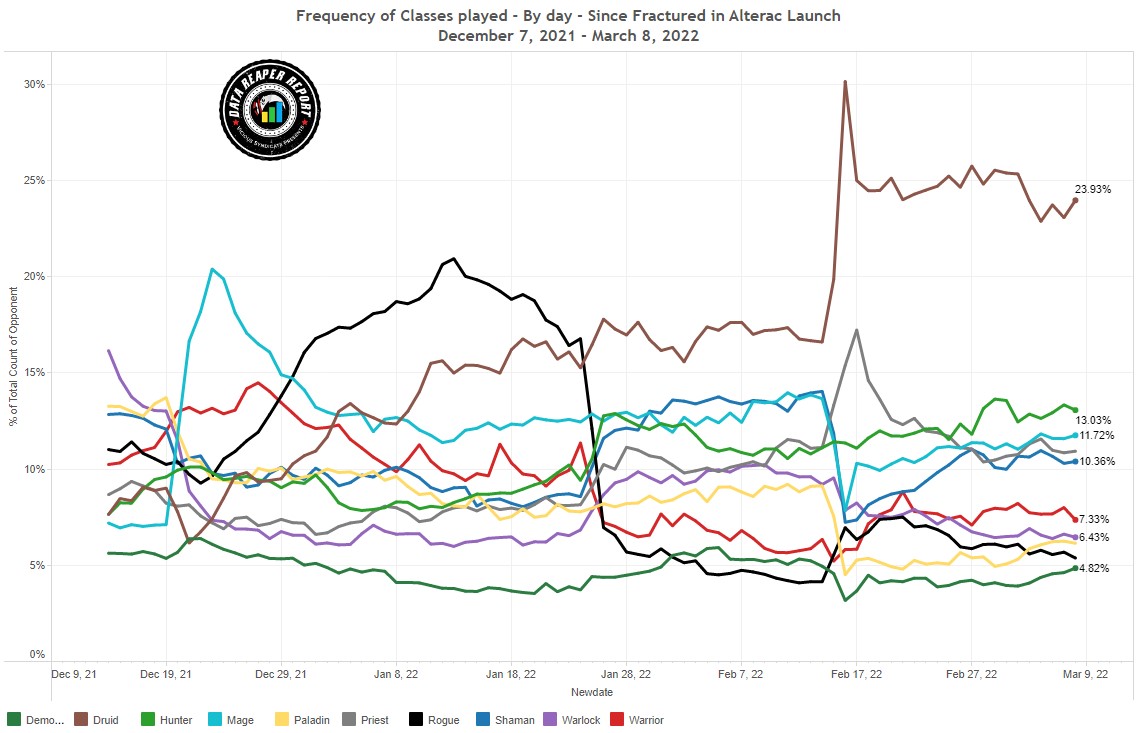 The removal of Locusts from Kazakusan’s treasure pool has done very little to discourage players from playing their beloved Ramp Druid.

Burn Shaman has risen in play at most ladder brackets, but significantly declined at top legend. This is a very important development when it comes to the power level of other decks in the format.

A similar thing is happening with Control Warrior. Remember that the Control Warrior/Burn Shaman pairing is extremely influential at checking the performance of aggressive decks in the format. With a meta so polarizing, even the slightest movements in Rock, leads to different results coming from Paper and Scissors.

Miracle Priest is seeing slightly more play at top legend, but not much else is noticeable in the class. Shadow Priest is the most popular opponent you should expect to face from Diamond and above.

There’s a major spike in the popularity of Quest Hunter this week, and there are multiple builds gaining traction in the process. From Diamond and above, Quest Hunter is more popular than Face Hunter, which has taken a back seat to Shadow Priest.

Demon Hunter is another class that’s seeing changes. The biggest one is the rise of Kazakusan in new builds of Quest Demon Hunter decks, both Fel and non-Fel.

Warlock is declining across the board. There are fewer Handlocks throughout ladder, and fewer Owlocks at top legend.

We still see the same popularity pattern coming from Wildfire and Mozaki Mage. Those decks haven’t moved an inch.

There’s a bit more Paladins this week, even at top legend where the class is often ignored. Some people have started to believe again. 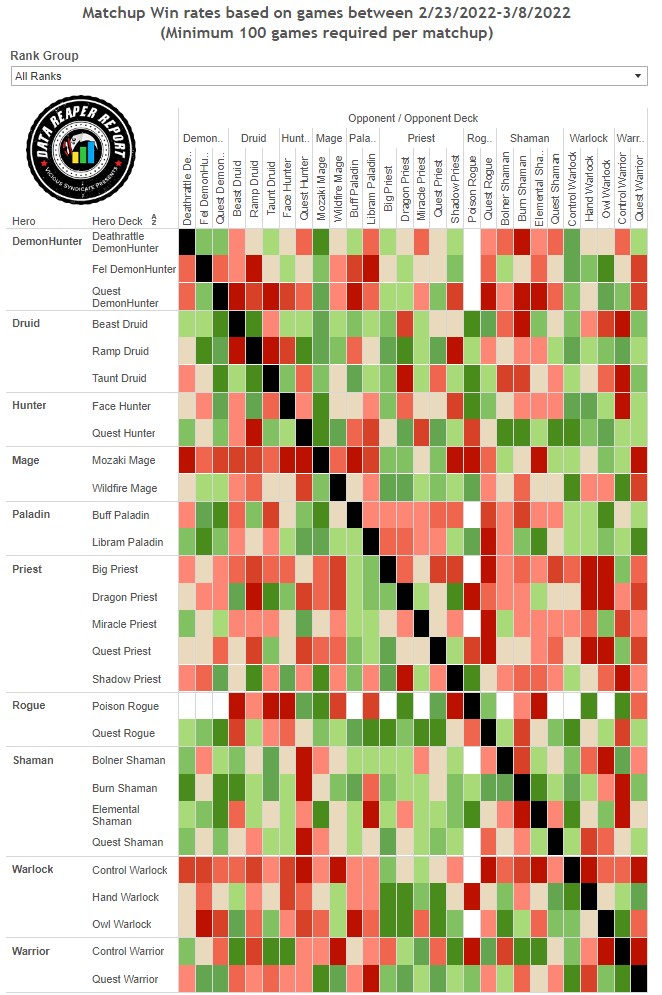 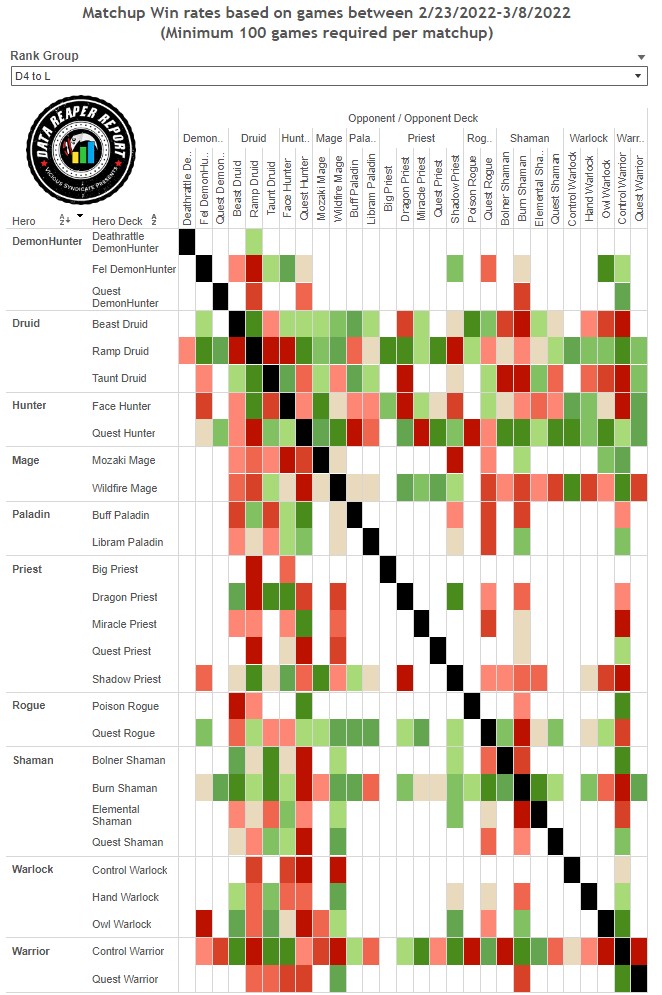 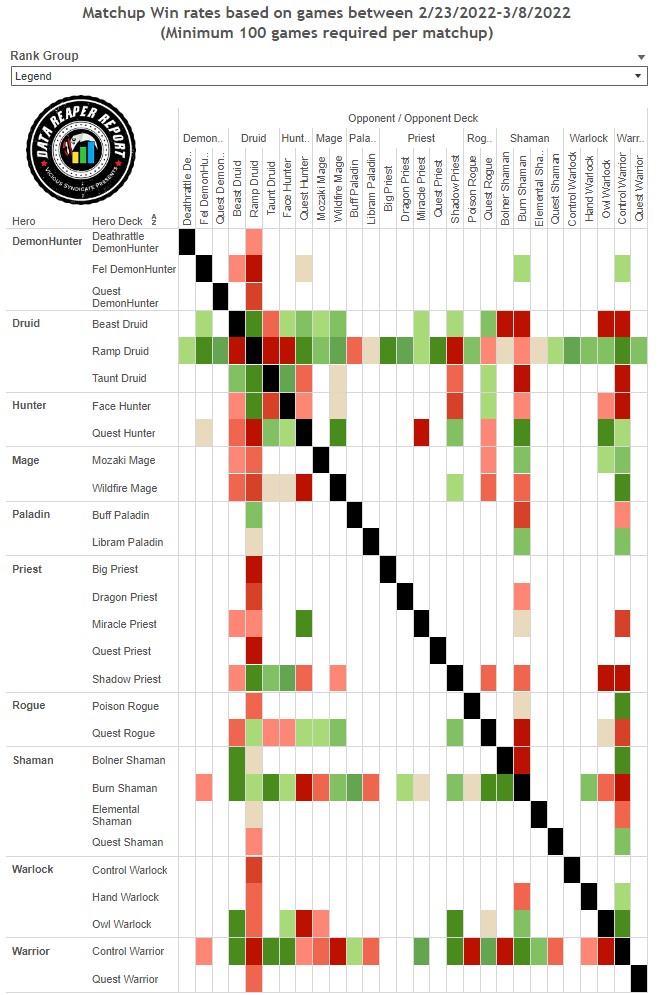 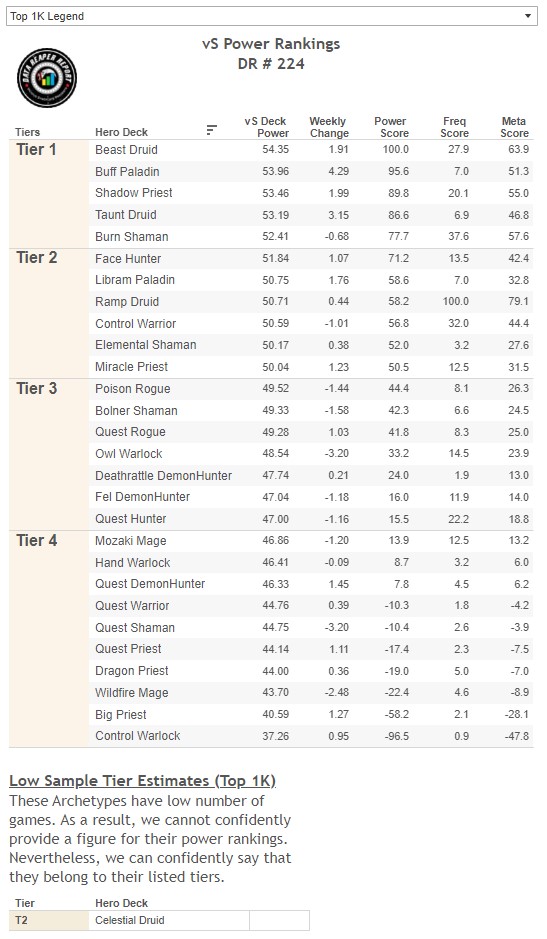 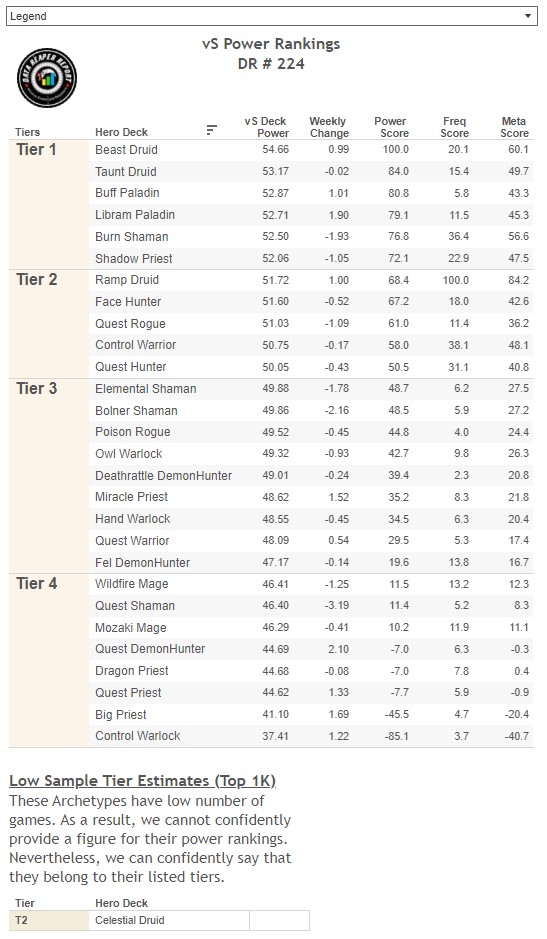 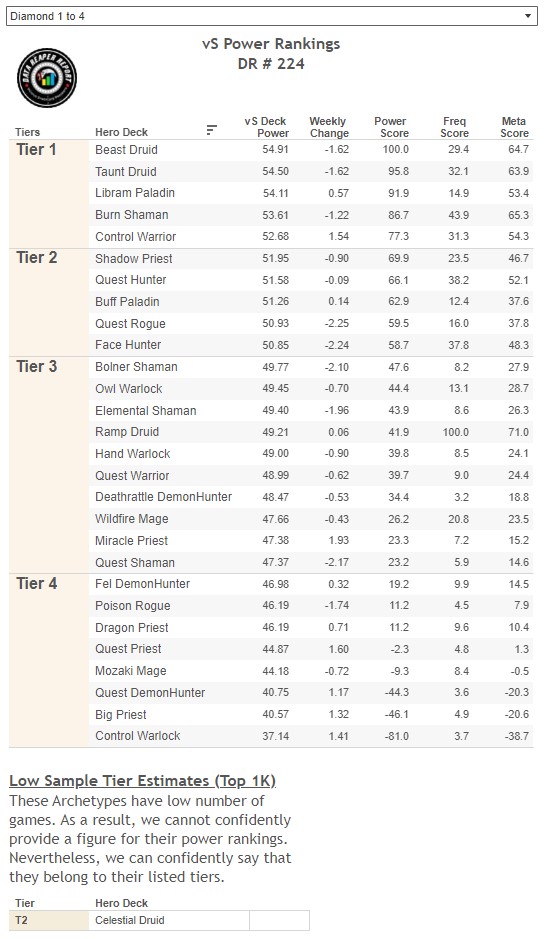 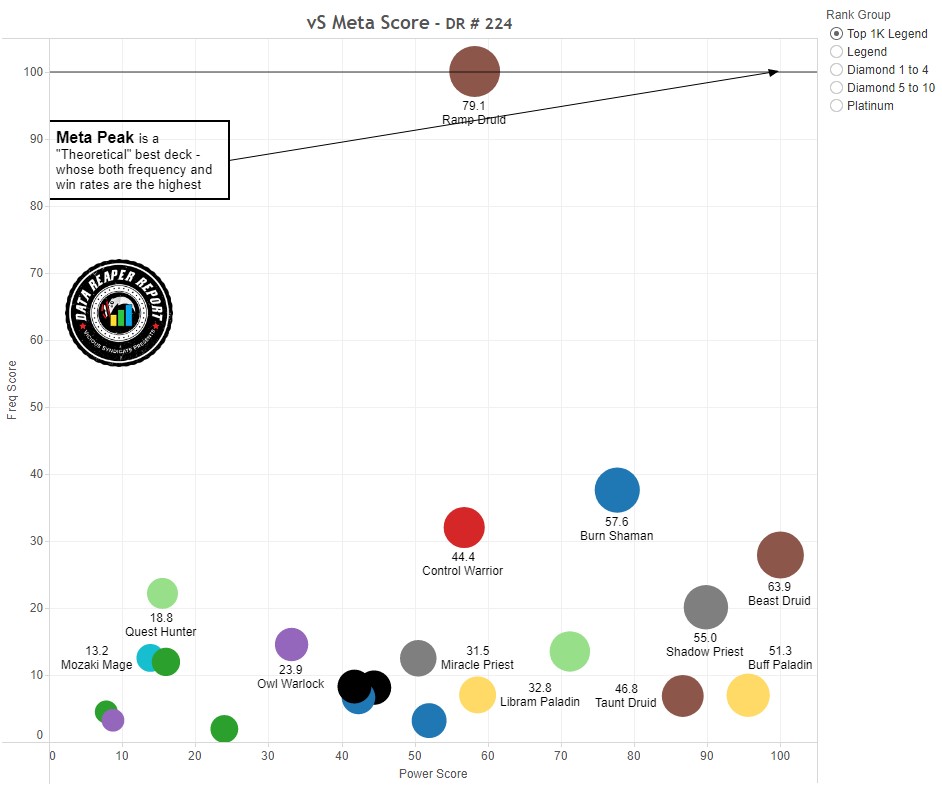 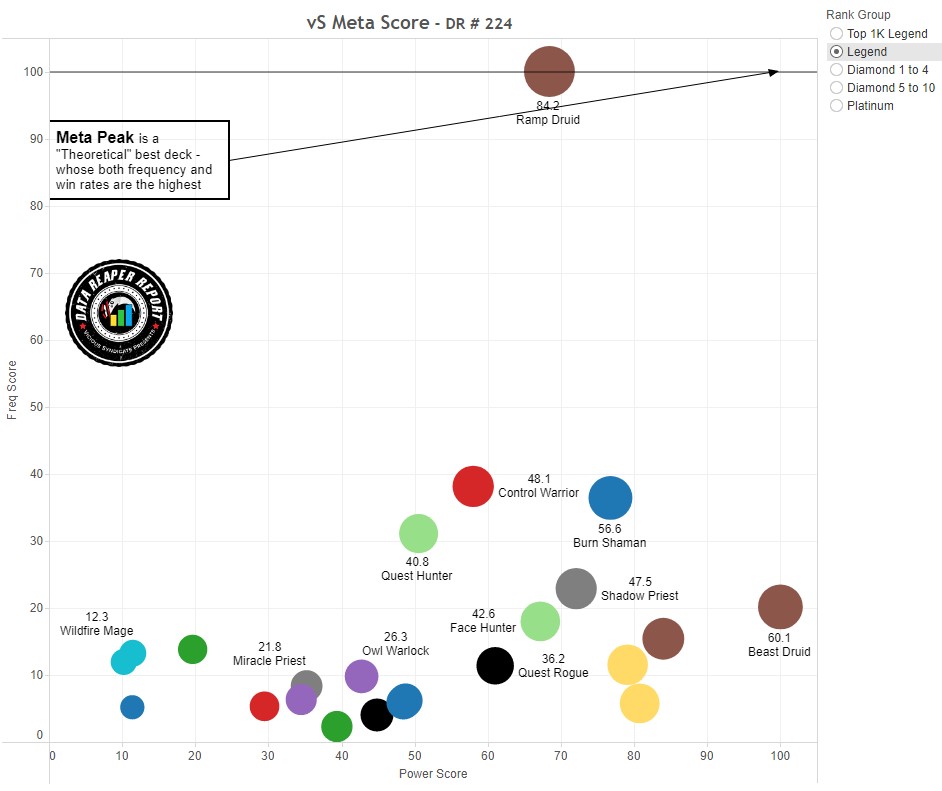 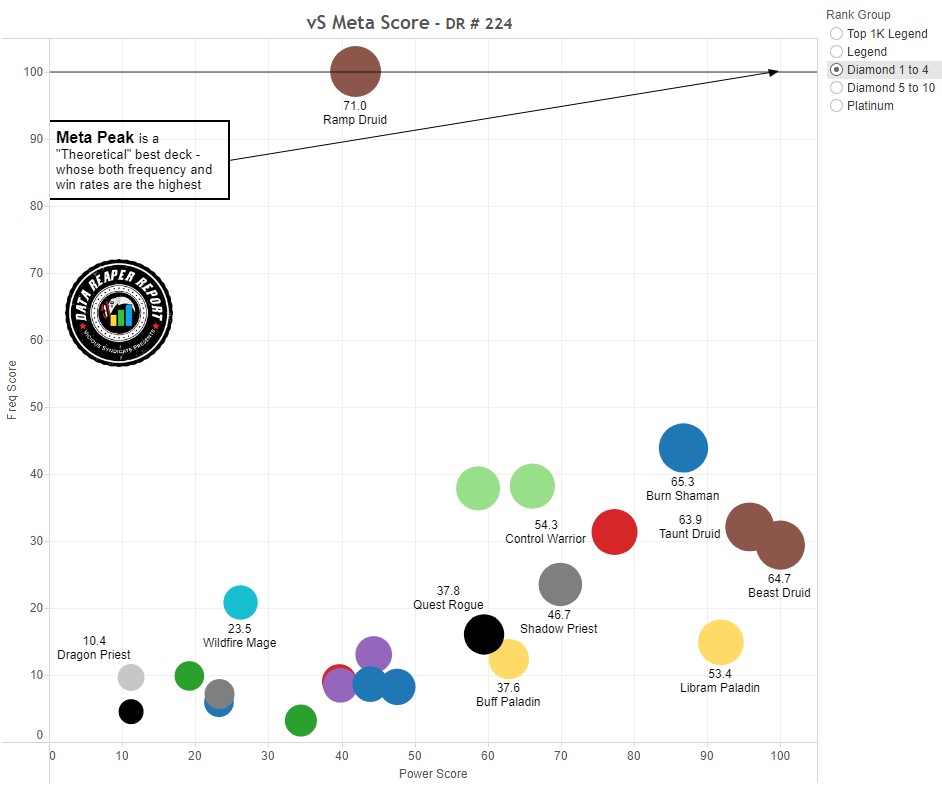 It’s become very clear that while there is a wide variety of Ramp Druid builds, the Turbo Ramp Druid with Malygos is the strongest variant within the archetype. This is true at all levels of play, including top legend, as the build simply possesses the most well-rounded matchup spread available. Mana is good, and this build ramps more consistently than any other, which means it can leverage Malygos and Kazakusan extremely effectively and stabilize through Solar Eclipse/Cenarion Ward. It particularly excels against both Control Warrior and Burn Shaman.

The Glowfly Swarm build has some use. It’s good in the mirror, and in other matchups where the opponent has a difficult time dealing with the Swarm/Arbor Up threat (such as Rogue). We’ve tweaked the build to include Innervates to be able cheat out Swarm or Scales earlier when possible.

We generally do not recommend Coldtooth Mine builds that cut Cenarion Ward and the rest of the top end just so you can find Kazakusan ‘more consistently’. There are almost no matchups where Coldtooth Mine outperforms other builds (Owl Warlock might be the most noticeable one). Since we often get asked about this variant by players who feel better playing it, we will feature it.

Celestial Druid has also seen some development. Players have started running Scales of Onyxia in the deck, and we’re honestly not sure why it took this long. Once we started seeing data for the card, it’s clear that it is a core inclusion in the deck that’s even stronger than Raid Boss Onyxia. The featured build looks strong, and you could even cut one Umbral Owl to keep Raid Boss Onyxia around alongside Scales. Running one copy of Germination is a big mistake.

Shaman hasn’t had a good week. Burn Shaman is losing ground in the Ramp Druid matchup thanks to more players opting for the Malygos build, while other Shaman decks are crashing in their performance.

A Multicaster build of Bolner Shaman is seeing experimentation. A common mistake in the variant is running only one Circus Medic and no Mutanus. Cutting Bracing Cold (weak) for those two cards might put the variant on an even footing with the established build.

Shadow Priest wants to snowball harder in the early game, which is why Kul Tiran Chaplain is starting to look slightly better than Serena (which excels in faster matchups). The slower the meta you’re encountering, the more sense it makes to run two Chaplains over Serena and a 1-drop.

Miracle Priest is quite competitive at top legend, and both variants are strong. A recent trend in the Malygos build is to cut Xyrella to increase the consistency in which you draw Nazmani Bloodreaver to go off as early as possible against Ramp Druid.

Hunter is currently experimenting with Drek’Thar builds with mixed results. In Face Hunter, the Drek’Thar build is playable but looks clearly inferior to the Rhino build.

In Quest Hunter, the Drek’Thar build with Rustrot Viper and Professor Slate has cleaned up and looks better than it did last week. If it can find a couple of cards that are better than Resizing Pouch or Carrion Studies, it can go places. We’d like to see more data on Beaststalker Tavish and Spring the Trap alongside two Explosive Traps. One misconception is that the Drek’Thar build is better than the HowlCaster build in the Ramp Druid matchup. They are very similarly unfavored.

Another Quest Hunter build has also popped up with Maxima and Darkmoon Tonk, and it looks surprisingly competitive. Maxima is particularly powerful against passive opponents that don’t develop the board, such as Control Warrior, where she can cleanly deal 16 damage on the spot. A similar line of reasoning brings us to recommend testing Tavish. In a Quest Hunter deck that doesn’t have the insane amount of draw that HowlCaster possesses, Tavish could offer an alternative to the burn plan.

Warrior has had a quiet week. Kazakusan Control Warrior has already found the perfect 30, while Quest Warrior isn’t relevant competitively unless you force players to bring it to a weird tournament format.

Demon Hunter is having some development with players experimenting with Kazakusan in Final Showdown decks. It seems like a good fit, though these decks still generally don’t look great on ladder due to the difficult Ramp Druid matchup. In tournament lineups banning Druid, the quest variant of Fel Demon Hunter significantly rises in value.

When it comes to the build, minimize your minion count so that Kazakusan can come online earlier. Running other minions such as Viper and Magtheridon is possible but needs to be backed by a very specific reason.

Alternatively, the Jace package can be cut for a Sentinel build as seen in the non-Fel Quest Demon Hunter build. This deck is far quicker to activate Kazakusan thanks to Sentinel being fueled by a lot of cheap cards but is far more reliant on Kazakusan to close out games since it has no damage.

Drek’Thar in Hunter? How about Drek’Thar in Deathrattle DH? Some experimentation is brewing in this archetype that looks promising. We’re featuring a preliminary build, but it’s unlikely to be the finished product. This deck’s ability to pressure early while still possessing a lot of card draw to find the Expendable/Deadeye combo later in the game is what sells us on the direction.

Owl Warlock is suffering from the decline of Control Warrior and Burn Shaman, while Hand Warlock has long seemed unplayable at the upper echelon of ladder. The class isn’t having a great time and there’s no adjustments seemingly out there to make things better.

Mozaki Mage is simply having a horrid time dealing with an extremely hostile meta, while Wildfire Mage is just not very good. The Rune variant of Wildfire Mage has faded away, leaving only the Multicaster build in somewhat playable status.

Quest Rogue was significantly weakened by the SI:7 Smuggler change. We did notice that the strategy of vomiting as many SI:7 cards as possible has gotten weaker compared to the Edwin/Smite approach, so we’d like to see more data on the latter as it’s not played nearly as much as it should.

Poison Rogue blows hot and cold depending on queue variance, and it’s been colder lately.

Buff Paladin has become an amazingly effective choice at top legend due to a decline in some of its hardest counters, and Libram Paladin is looking better too. When the meta is exceedingly greedy, this class shows up and does some work.

Rock is very popular, so Paper is good.