Welcome to the 226th edition of the Data Reaper Report! 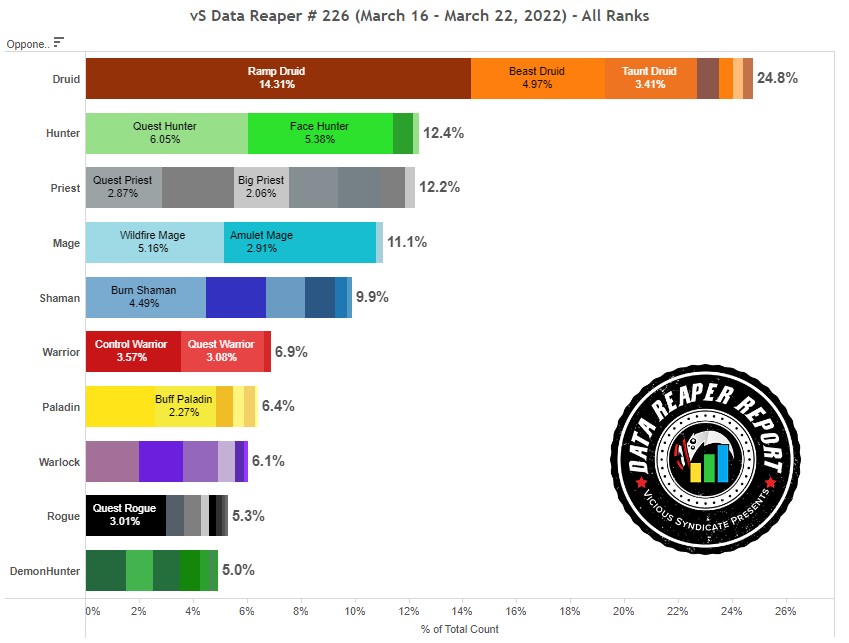 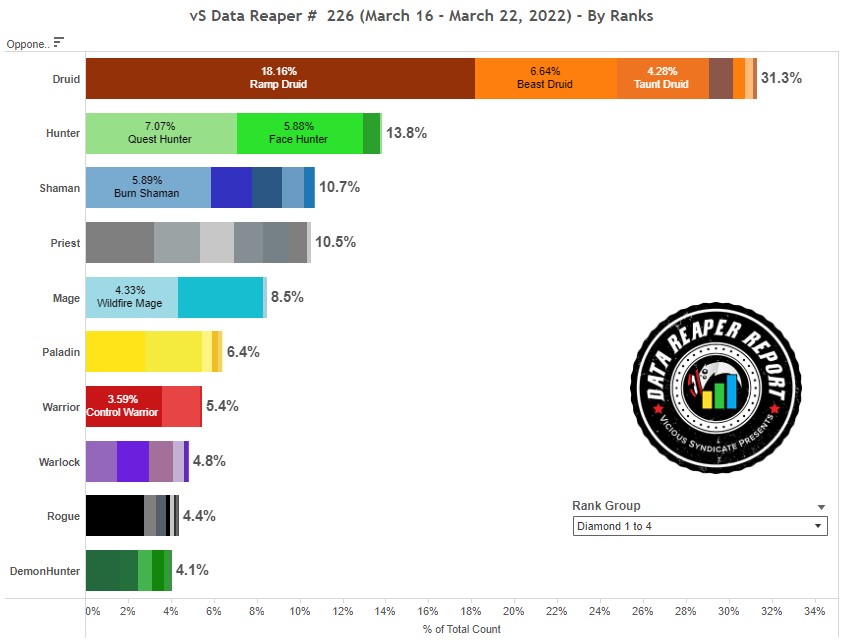 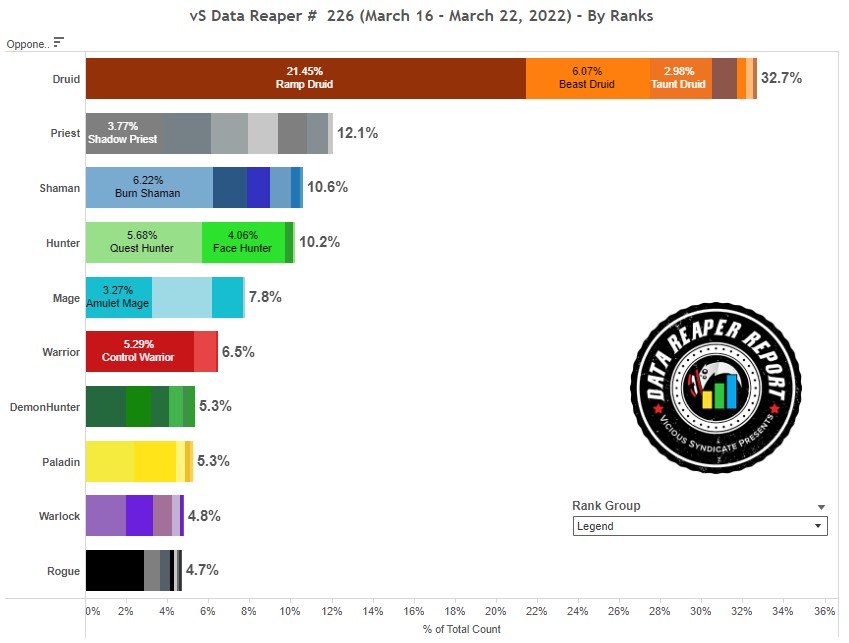 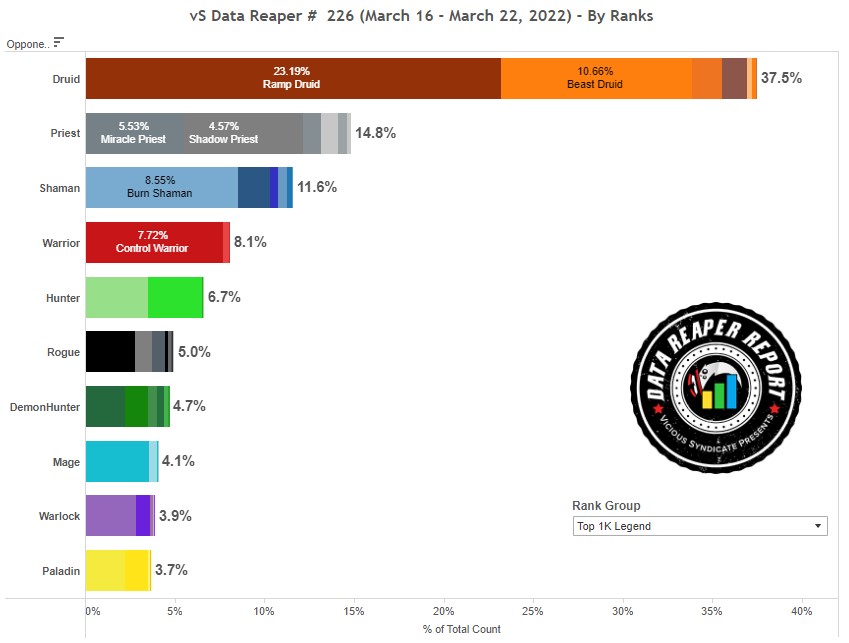 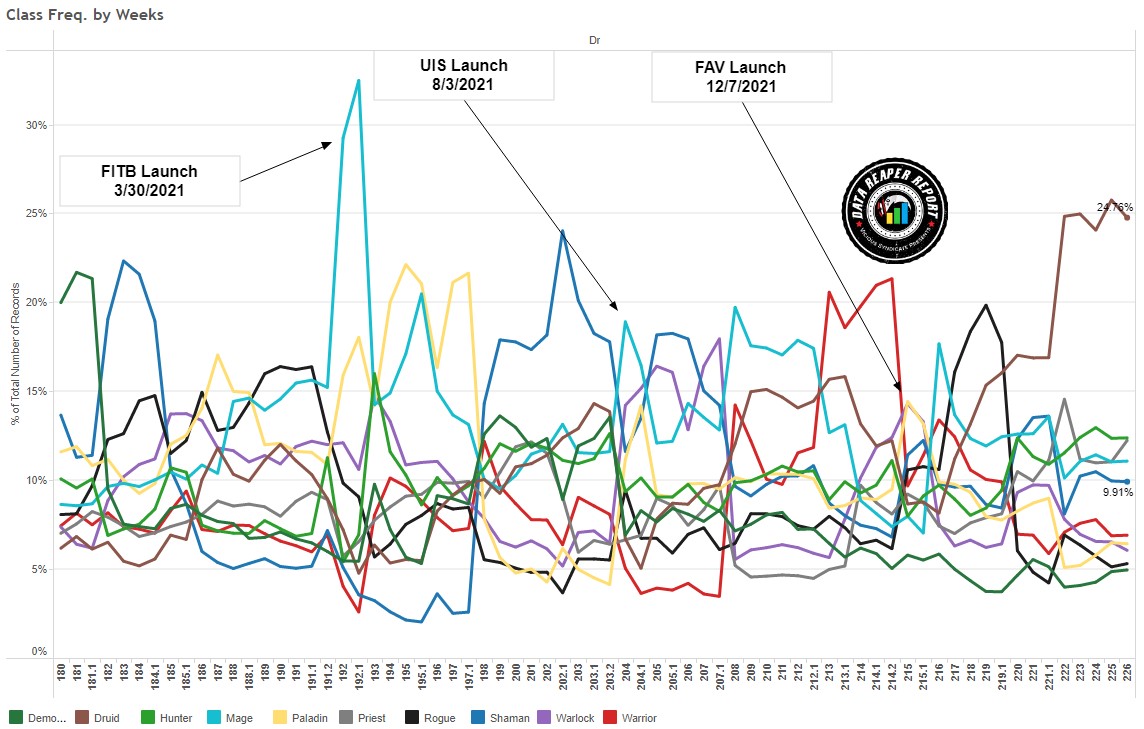 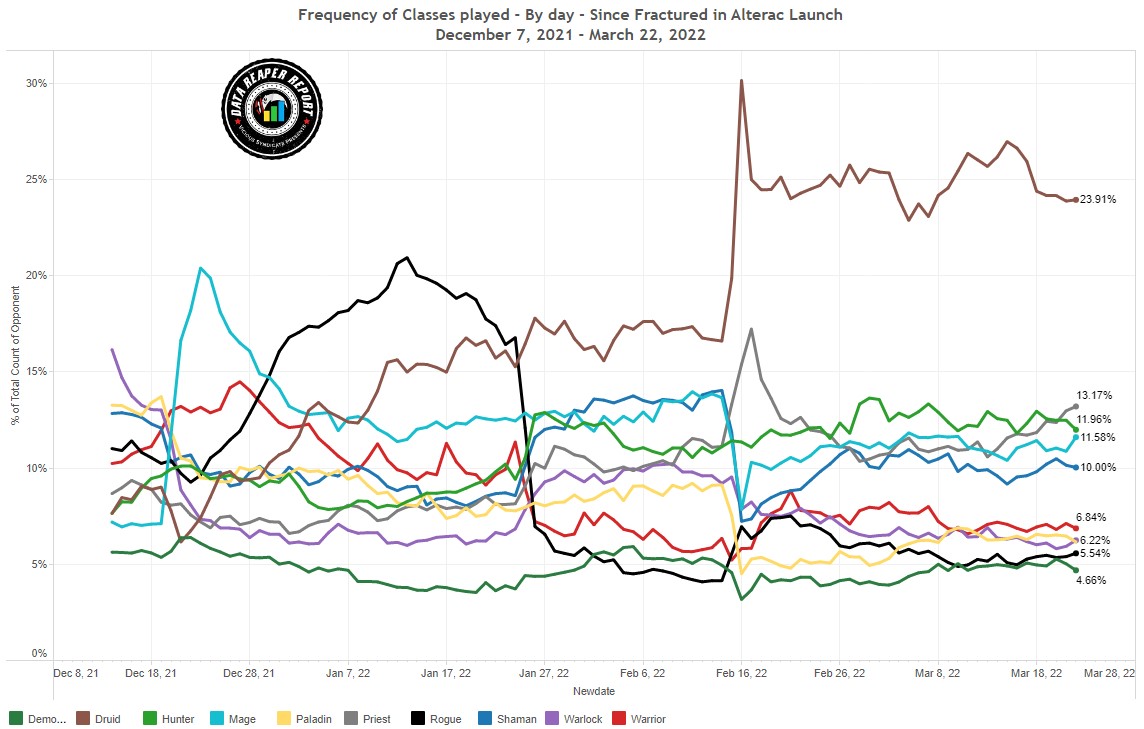 The meta has been stuck on Ramp Druid for the best part of a month. While the deck is powerful, it’s clear that its popularity is also a function of how fun it is to play for a lot of players. Kazakusan and Wildheart Guff are very satisfying cards to play, but their popularity has also arrested developments in other classes. Having said that, Blademaster Okani was introduced last week and is making quite a bit of noise in multiple decks we’ll discuss later.

The main trends this week is a slight decline of Quest Hunter and Ramp Druid (yes, Ramp Druid has declined compared to last week), a small uptick in Beast Druid as well as a rise in Control Warrior and Quest Rogue. Control Warrior should enjoy the transition in the Druid class, while the interest in Quest Rogue seems to be driven by its popularity and success at last weekend’s Master’s Tour.

Other interesting things to note is the emergence of Boar Priest. The deck has a 2% play rate at top legend (!). Amulet Mage is another fringe deck that’s also developing. 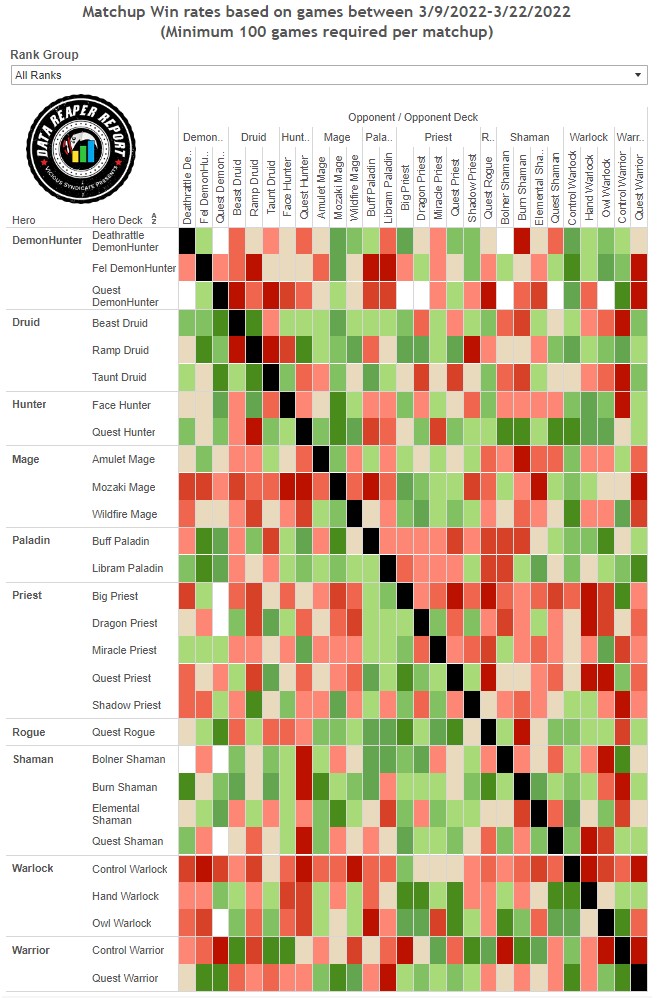 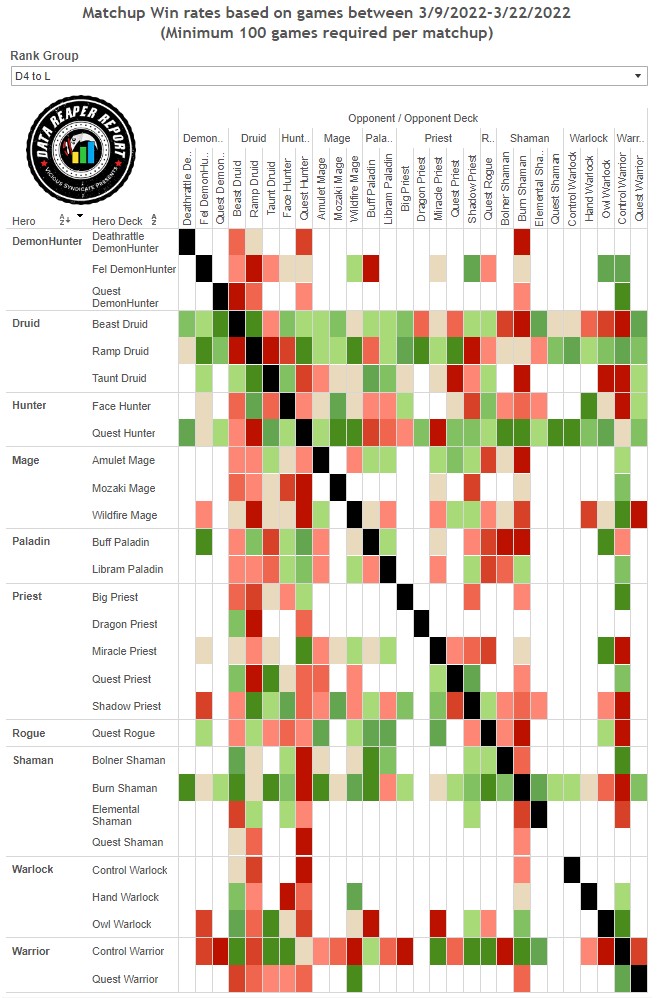 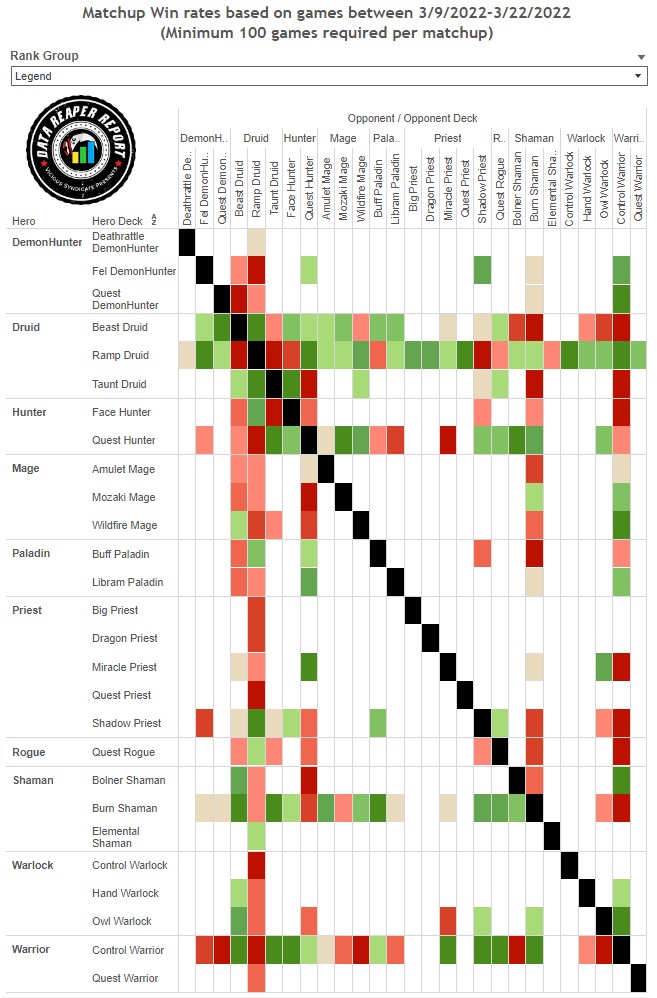 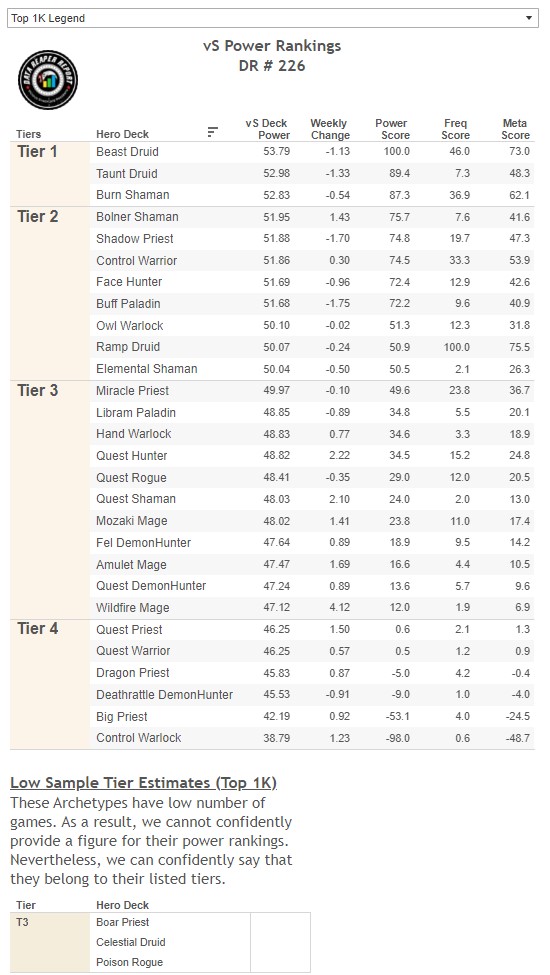 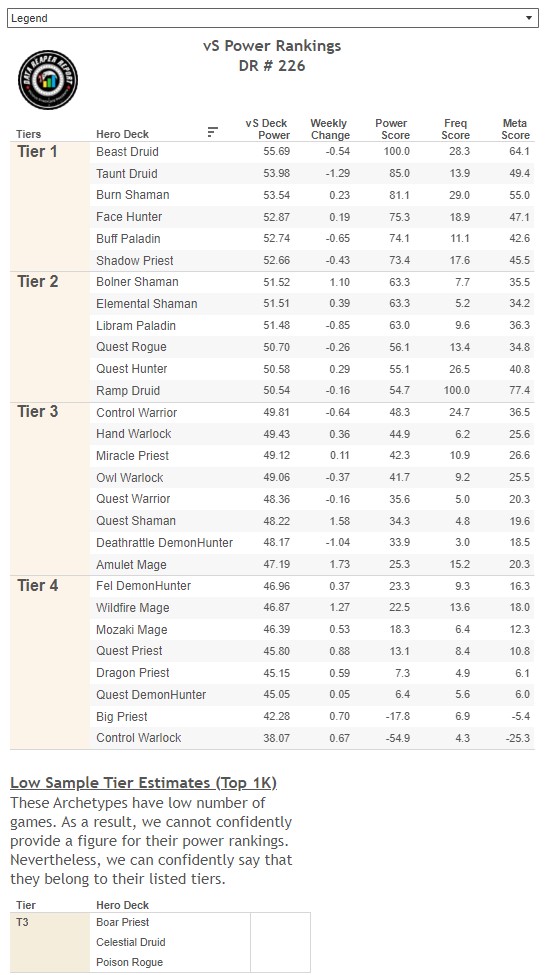 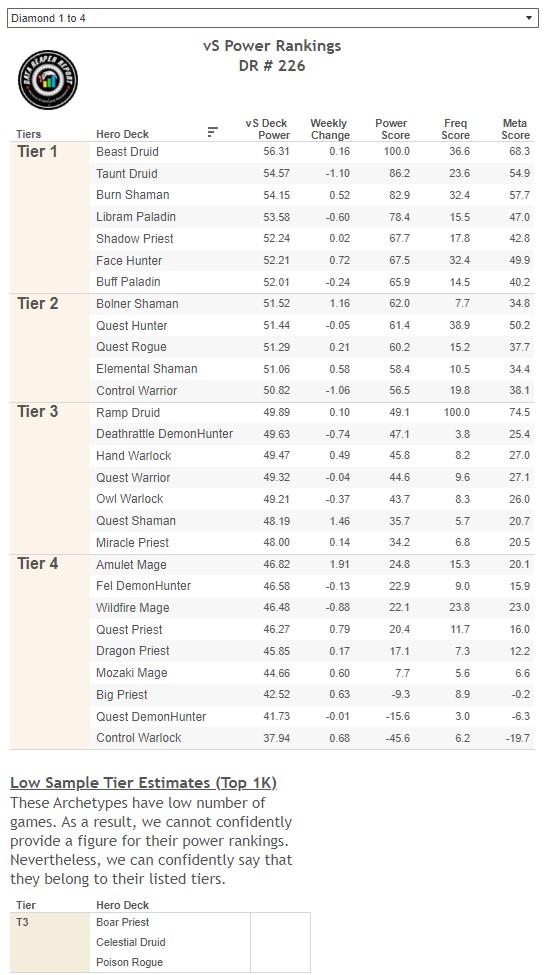 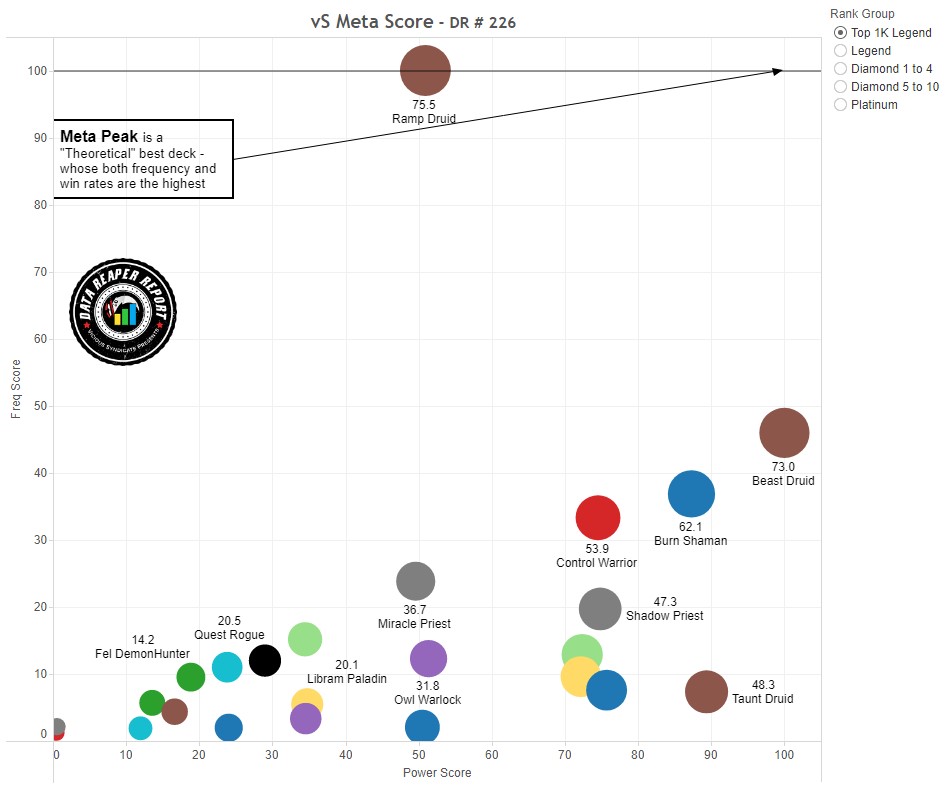 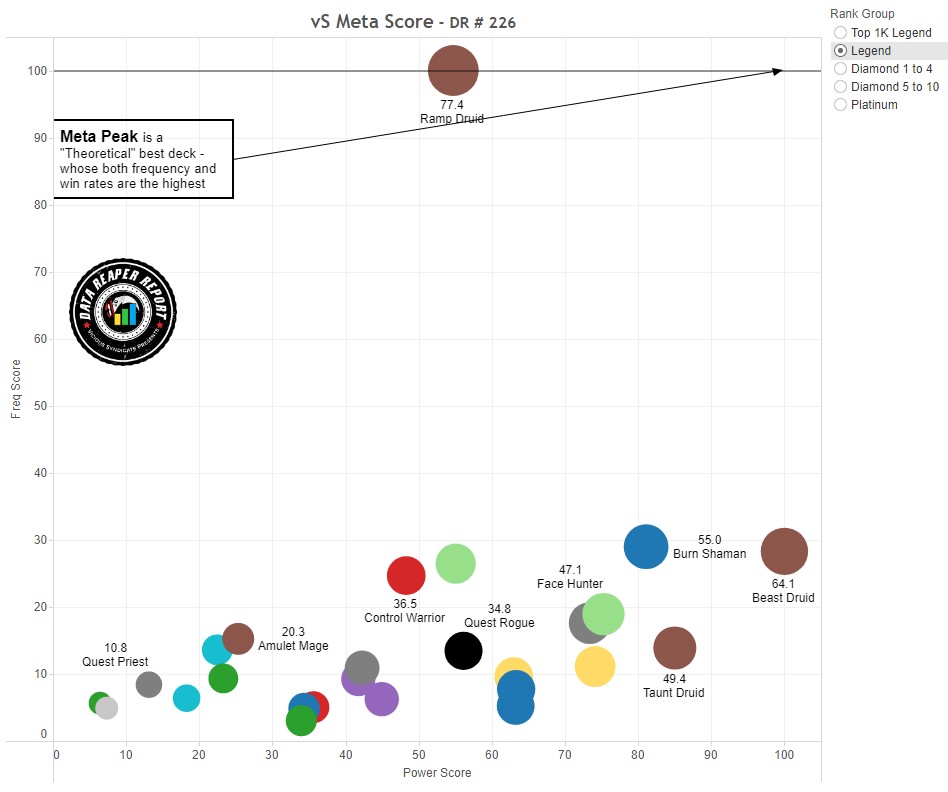 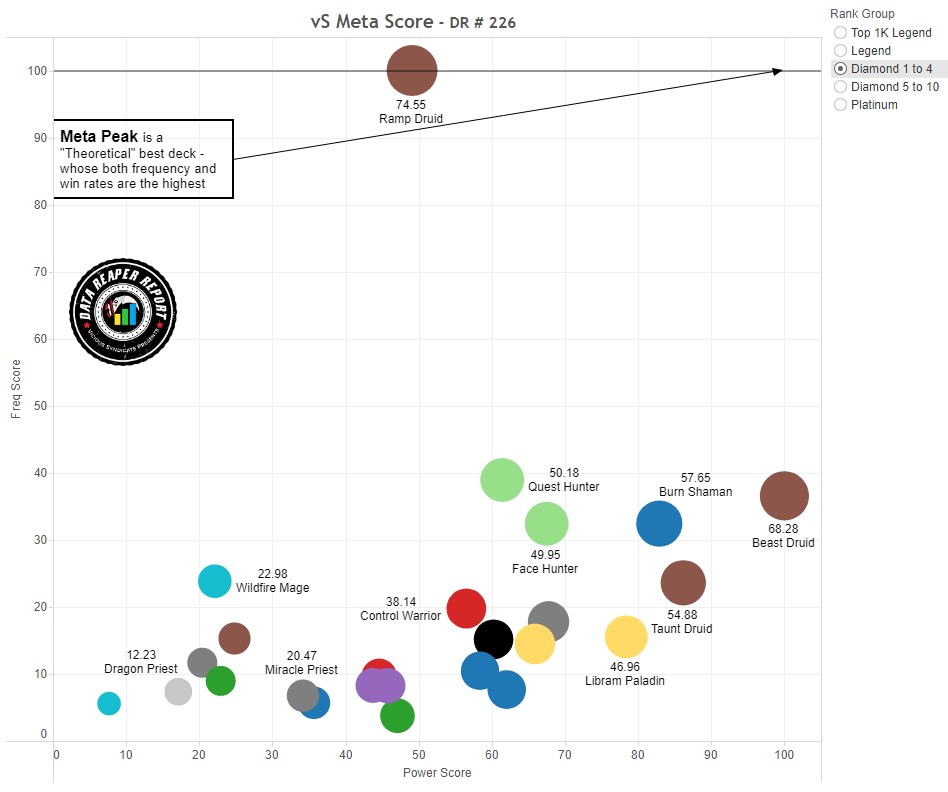 Not many changes are happening in Druid. Ramp Druid builds are established, with the Malygos variant continuing to look like the best all-around performer. Beast Druid is very strong, deputized by Taunt Druid. Celestial Druid is fringe. Prestor Druid is a meme.

Blademaster Okani is looking like a very impactful card in the format, and it’s particularly absurd in Shadow Priest. Just run it, no questions asked. Okani is also very good in Quest Priest, though the deck still isn’t generally good.

Boar Priest has started to see more play, and it looks fringe competitive. We see promise in builds running Lightmaw Netherdrake. One copy is a common choice, but its performance suggests that two should be mandatory. The extra survivability is huge.

Shaman is another class that can appreciate Okani. It has decent synergy with Brilliant Macaw. Even though Macaw doesn’t give you the choice of what to counter, this is still a disruptive play.

In Burn Shaman, Okani competes for the 30th slot with Viper, Dungeoneer and Fireheart. In Bolner Shaman, it is easier to fit alongside Spammy Arcanist.

Face Hunter hasn’t been running much of Okani, but based on preliminary results, it absolutely should. The card appears to be nearly as good in Face Hunter as it is in Shadow Priest. Aggressive decks that can press their advantage effectively seem to be the best place for the new legendary.

This is more of a borderline case, and we would like to see more data on it. Okani doesn’t progress the quest, but its disruptive effect does work well within Quest Rogue’s game plan. It is a card highly worth experimenting with, and there’s a way to make room for it. Okani also further encourages the utilization of Foxy Fraud and Scabbs Cutterbutter, to flood the board and pressure Druids.

Wicked Stabs have long looked unimpressive since they hurt our Swindles. Cult Neophytes aren’t great on ladder either, though they can be fit into the deck by cutting one copy of Blackwater Cutlass and either Okani or Tenwu.

Though Ramp Druid did decline a bit, Final Showdown decks are still not very suitable for ladder. Based on how Okani performs in other aggressive decks, it’s likely to be strong in Aggro DH.

A new, more defensive-minded build of Amulet Mage looks like it clearly belongs in Tier 3. Blademaster Okani is very likely to be a perfect fit for its minion-heavy shell, and Okani is also showing strong preliminary results in Wildfire Mage. More data is needed here.

Okani looks very strong in Handlock and is criminally underplayed in the archetype. While not an aggressive deck, Handlock likes to have disruption and Okani helps you close out games in many of the bad matchups in which you’re forced into the beatdown role.

Okani has very good synergies with the Paladin class. It seems to do well in both Buff Paladin and Libram Paladin, but especially the latter as it’s far more vulnerable to combo decks. Just put it in.

Okay, it’s not really a meta breaker or even a particularly good deck, but are we really going to pass up the opportunity to feature an Elwynn Boar deck if it shows even remote signs of being competitive? What else are we going to do, tell you how good Beast Druid is for another week?

Ladies and gentlemen. The Boar era has begun.

(No joke, this deck is actually very hard to play and only performs at an acceptable level at top legend, similarly to Miracle Priest. Player discretion is advised.)