Welcome to the 233rd edition of the Data Reaper Report! 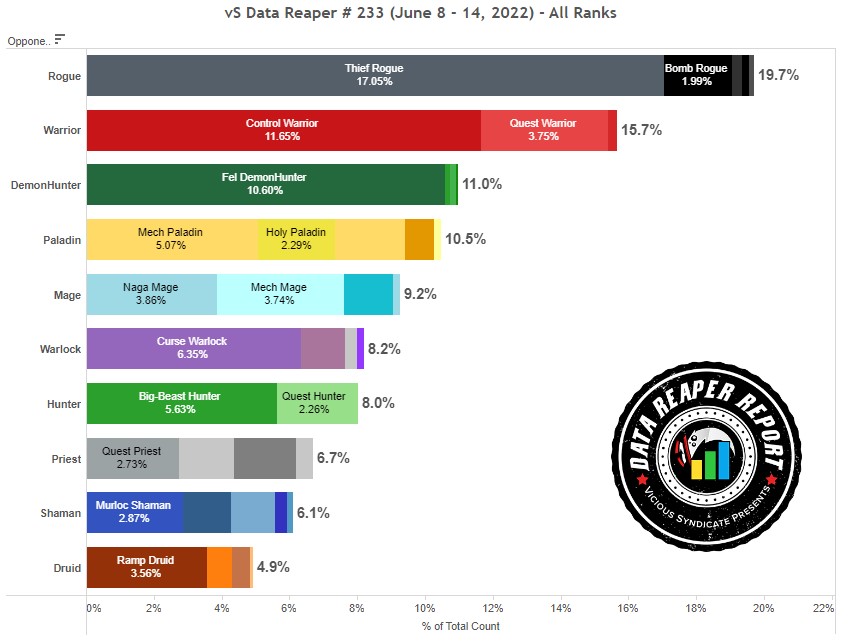 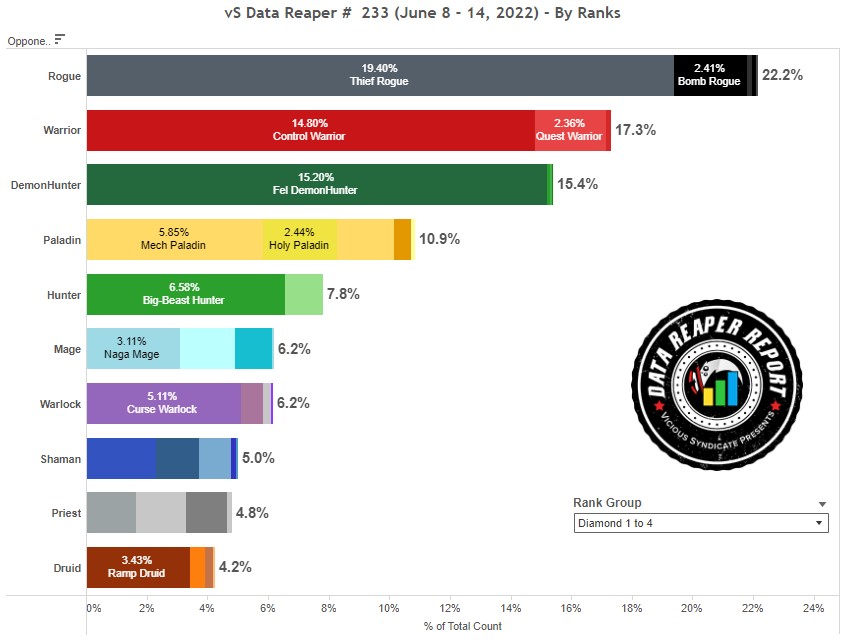 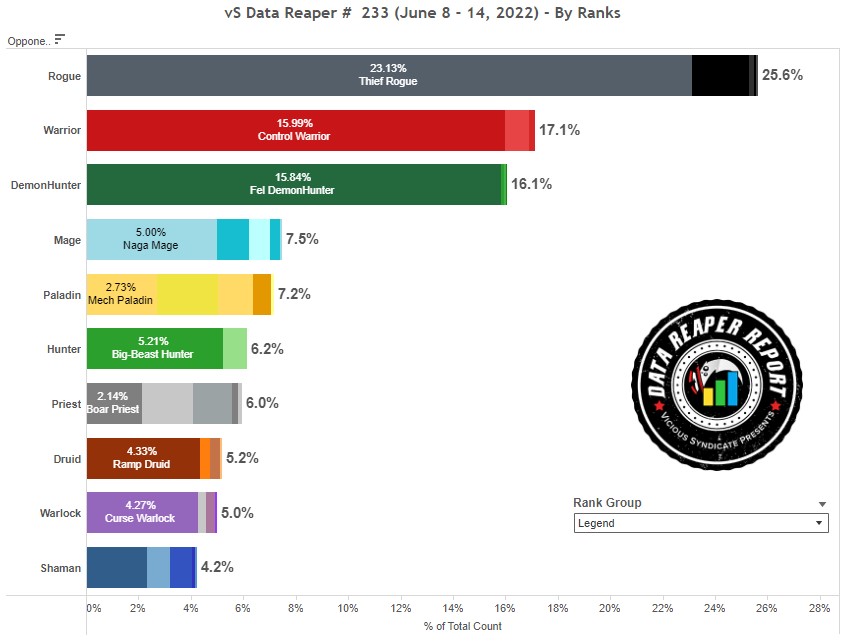 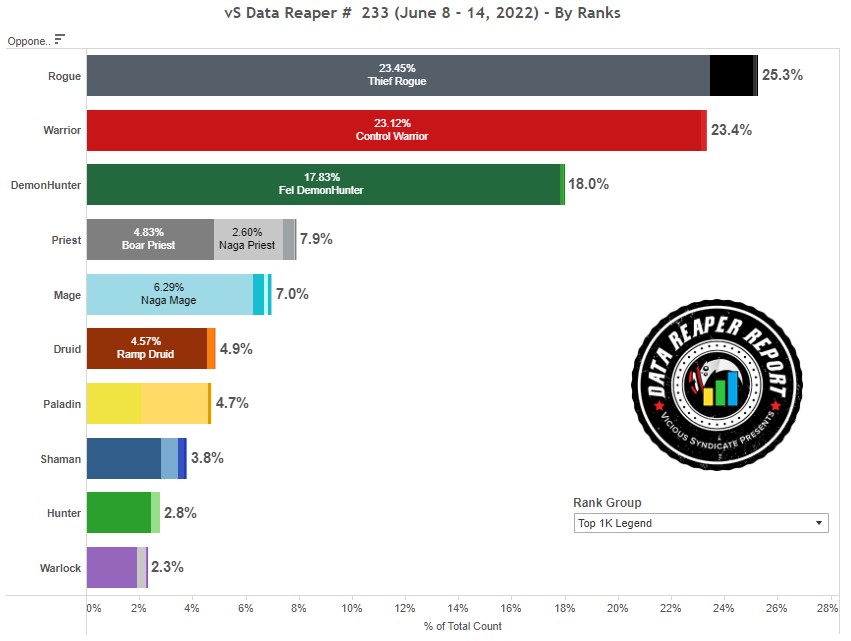 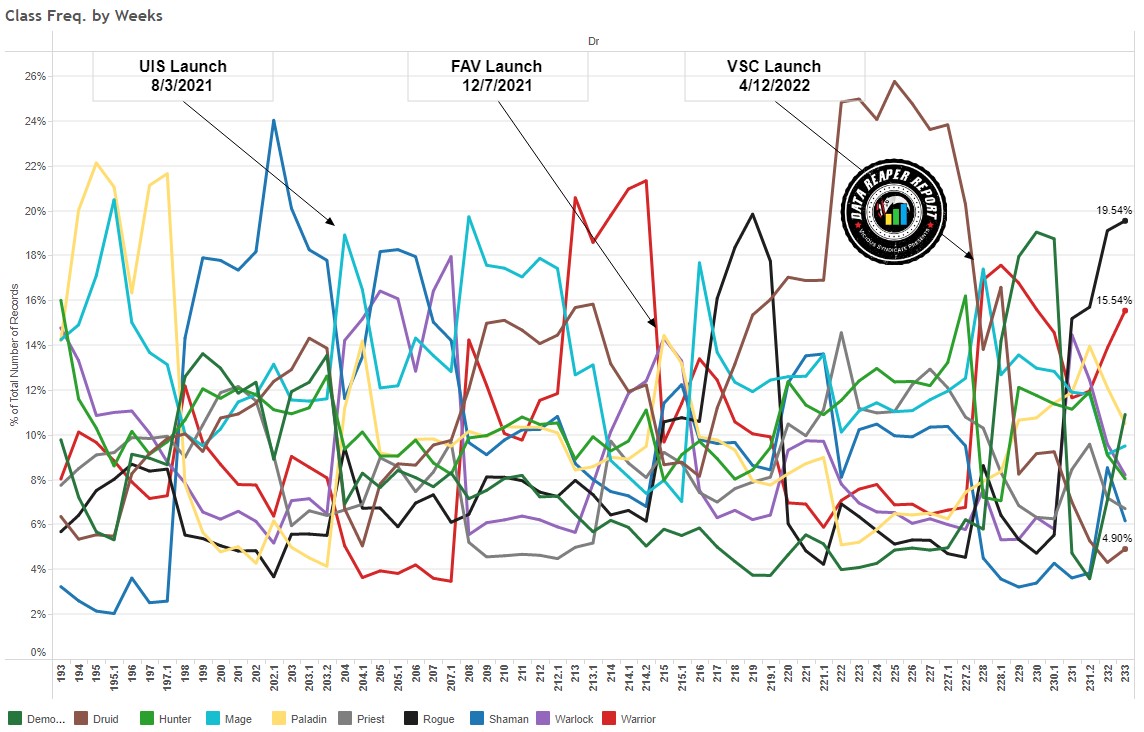 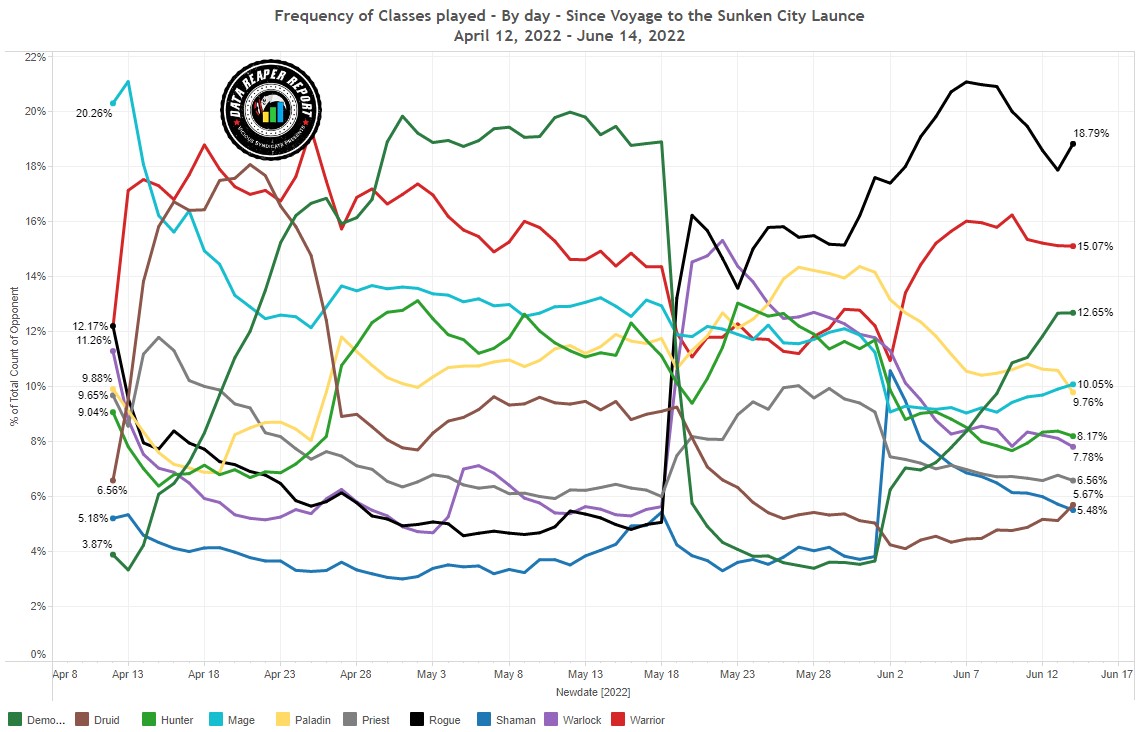 Rogue remains the most common opponent at every rank bracket. Outside of legend, Thief Rogue has grown in popularity compared to last week, but the deck has declined at legend. Stash builds are more common at lower ranks, while the ‘lean’ Vessel/Smite variant is more common at top legend. Bomb Rogue is declining across the board.

Steady growth of Control Warrior can be observed. The Elemental package has rapidly spread and builds we’ve highlighted last week are taking over. At top legend, Control Warrior matches the popularity of Thief Rogue.

But the class that has grown the most is Demon Hunter. Huge spike in play from Fel DH can be seen at all rank brackets. At top legend, the deck’s numbers nearly doubled and it’s rivaling the top duo of the format.

Other classes haven’t seen much development, and some of them have entered deep stasis. Naga Mage has seen a rise in play at legend as it has proven to be one of the better decks outside of the three most popular classes. Holy Paladin has declined under the weight of redundancy coming from Control Warrior. Shaman has fully embraced murloc as a core tribe to both its faster and slower strategy. 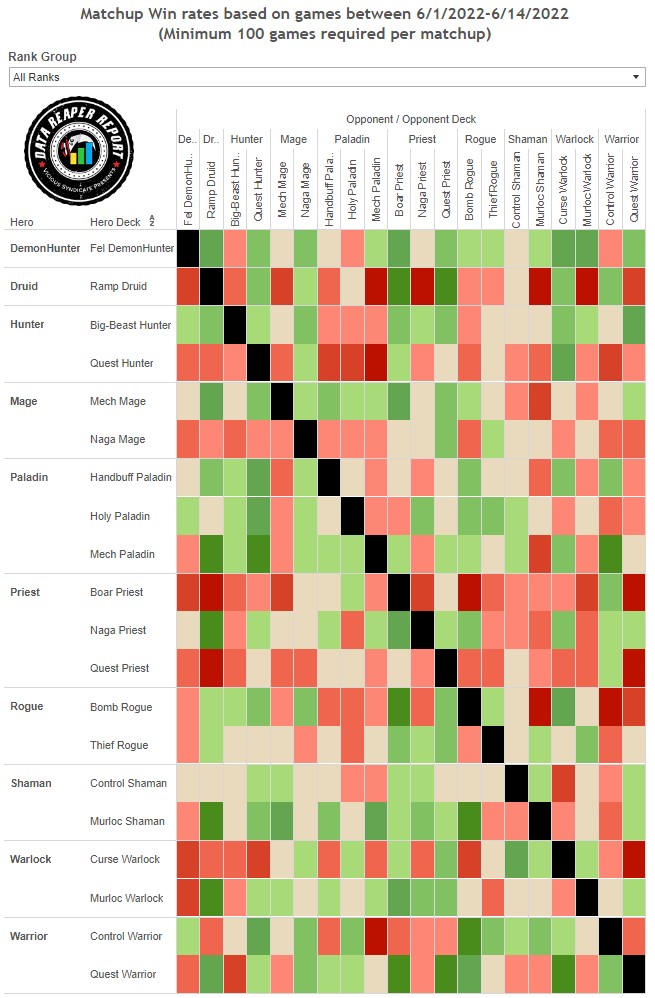 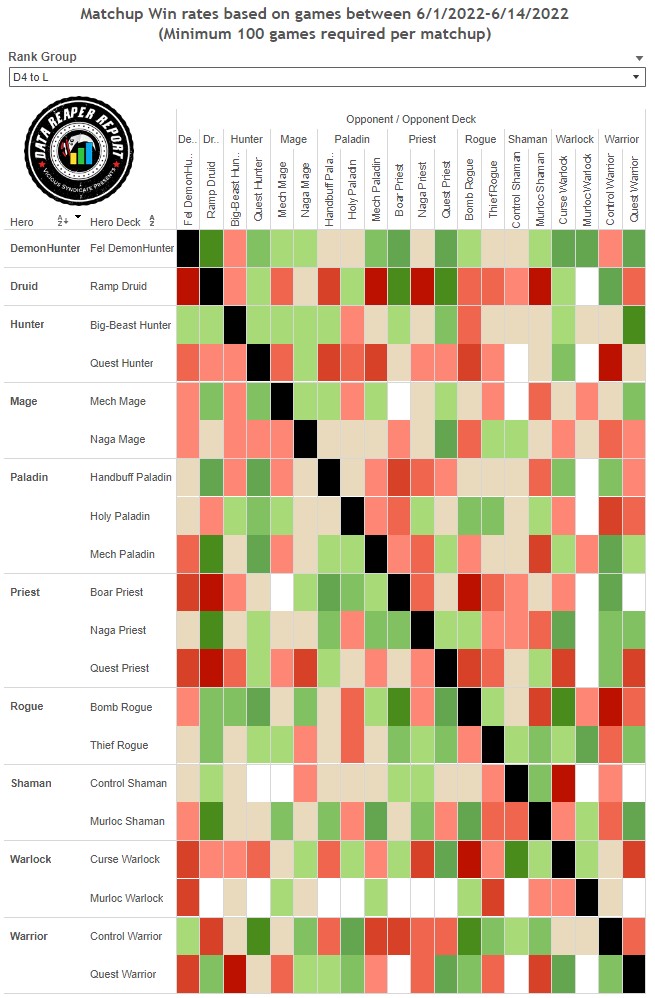 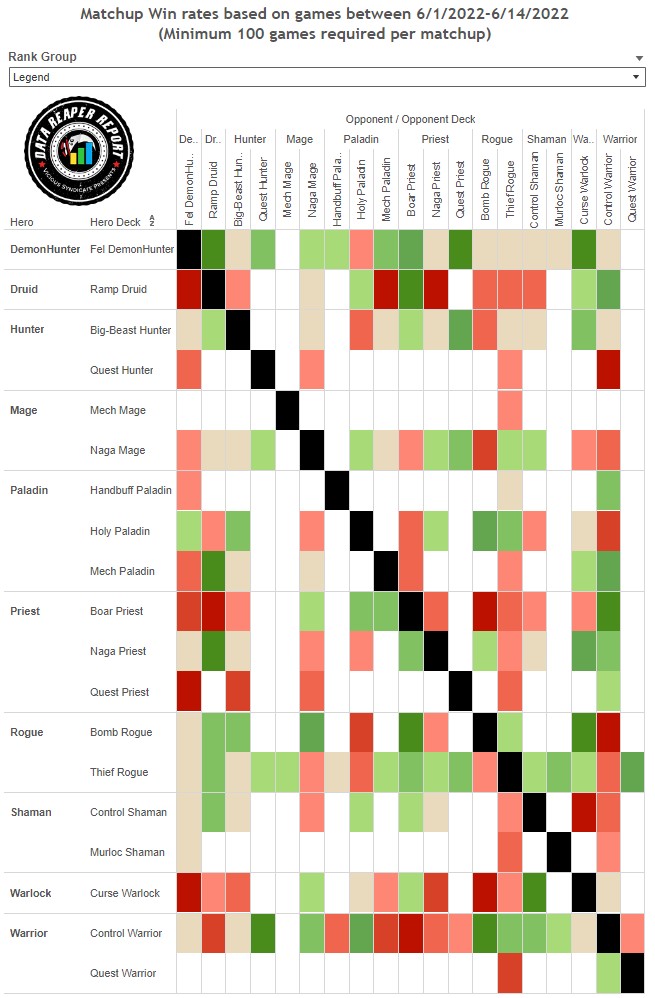 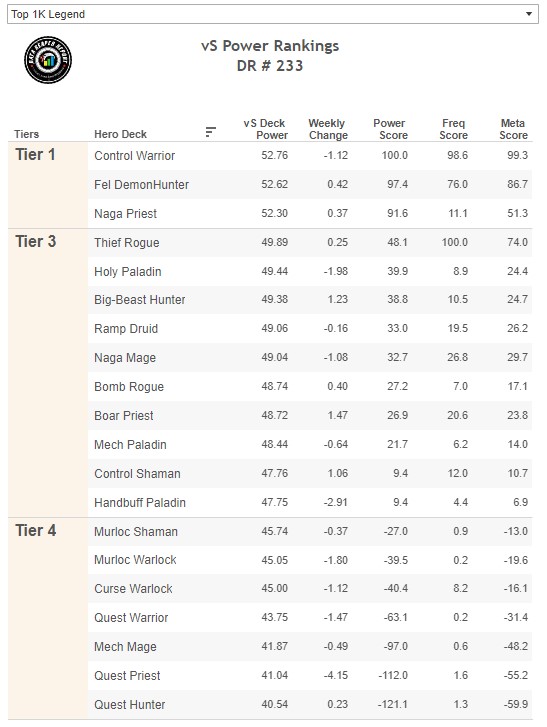 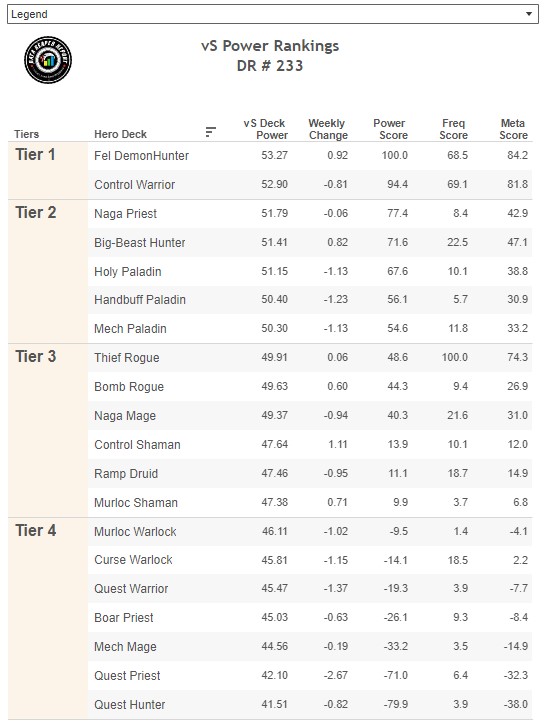 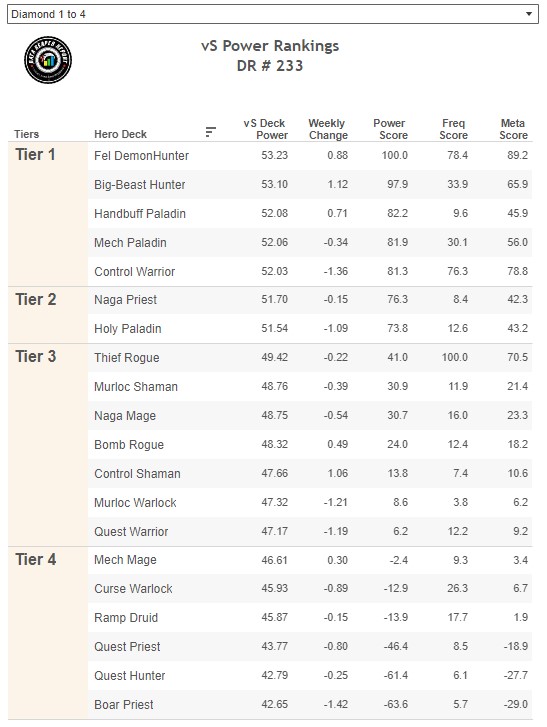 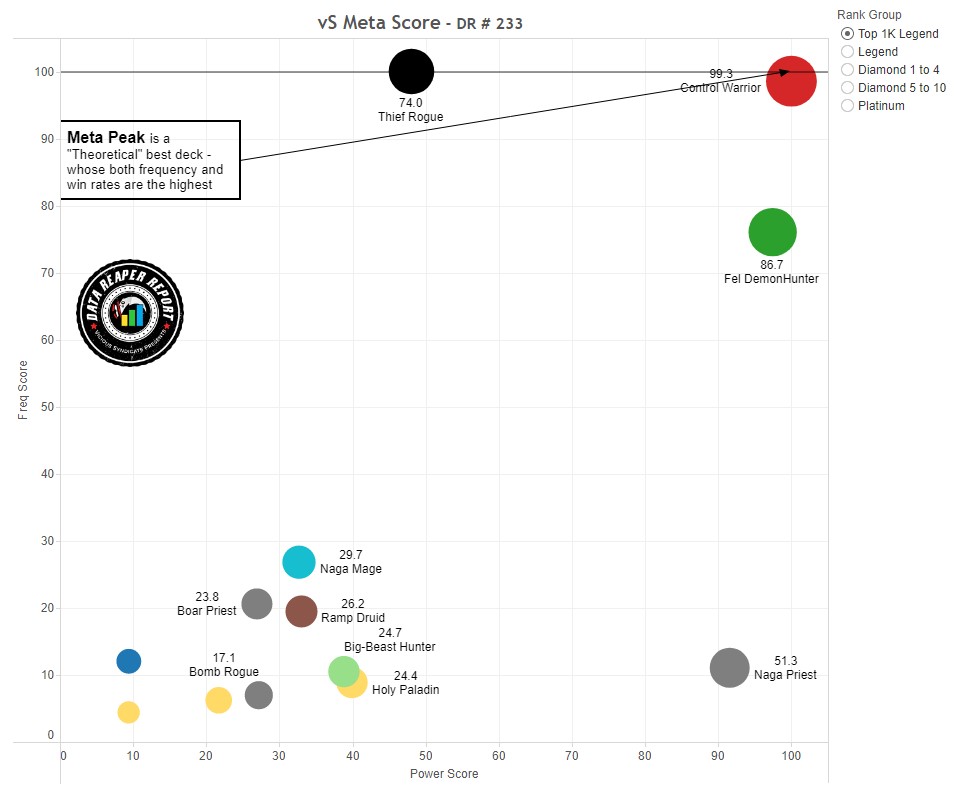 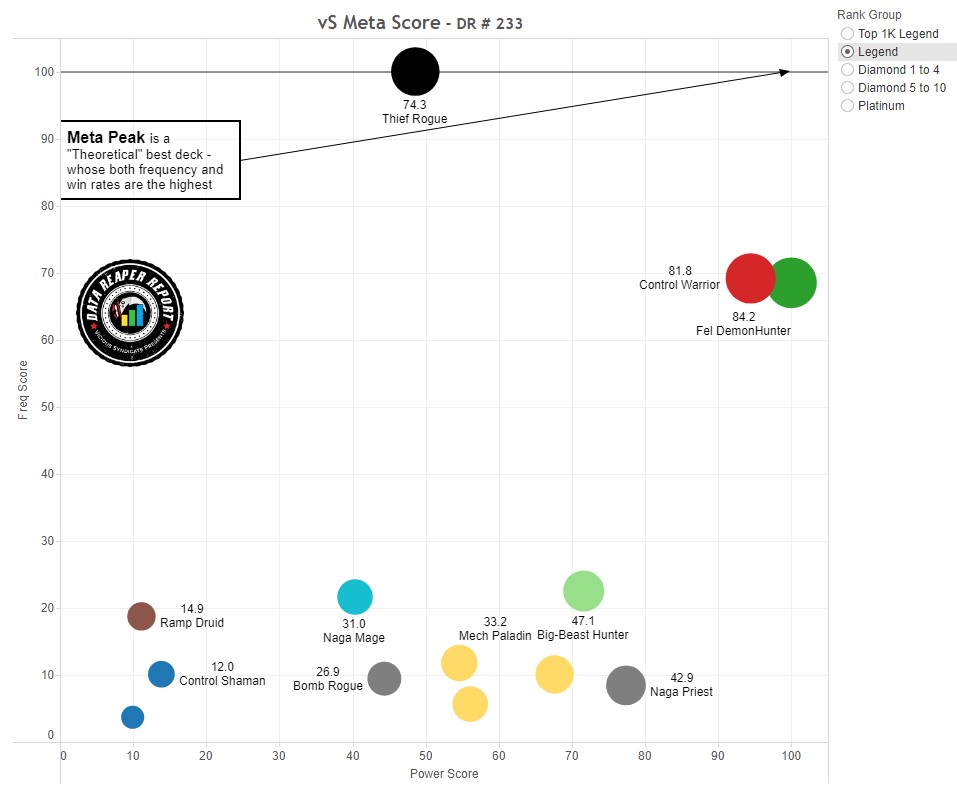 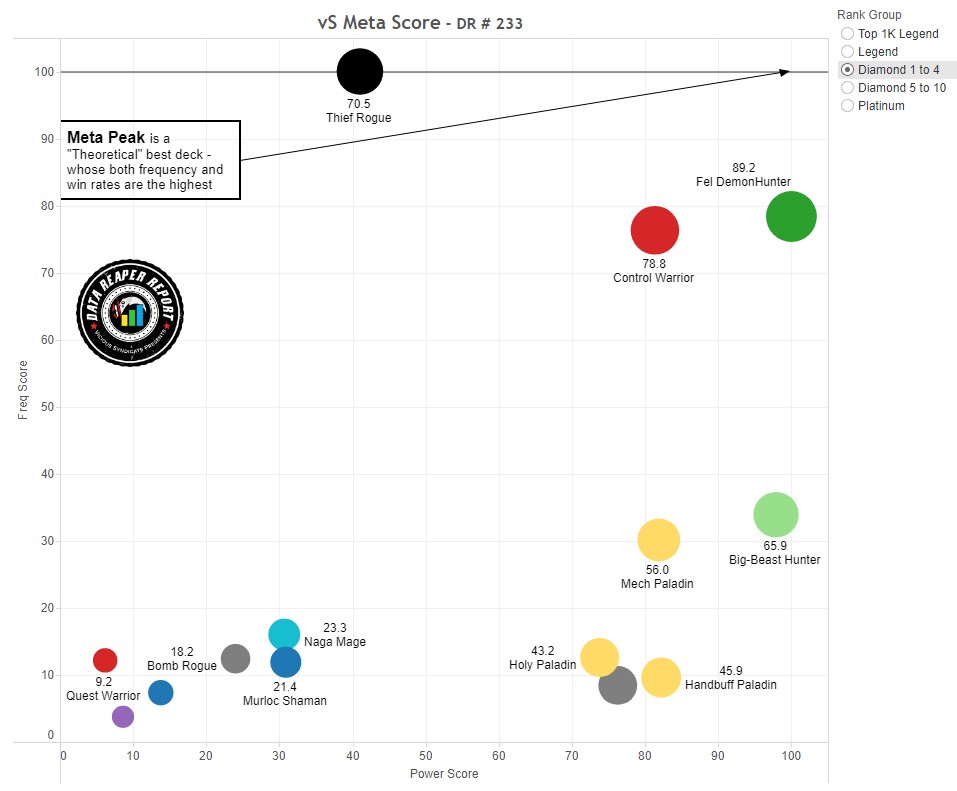 The meta at higher levels of play is shaping up to be very narrow, where a few decks are clearly stronger than everything else, sitting at Tier 1, while the rest of the field can’t manage win rates that are better than Tier 3. The only exception would be the Vanilla variant of Thief Rogue, which we estimate would sit at Tier 2 at top legend.

The meta at lower ranks is obviously very different, as there is a plethora of decks, many of them carrying tribal mechanics, that look quite dominant at these ranks before falling off at the higher ends of ladder due to their low skill ceilings.

Control Warrior remains very powerful, though it seems to have been joined by a couple of rivals closing the gap. Fel Demon Hunter’s performance and matchups look particularly scary. Unlike Warrior, Demon Hunter has a very balanced and well- rounded matchup spread that shows no counters whatsoever. There is no deck on ladder that can queue into Fel DH and consistently beat it without running some fringe and sub-optimal tech cards. In a format that’s filled with early “scams”, Fel DH exhibits one of the ‘healthier’ gameplay patterns (besides Caria), but it does seem a little too strong across the board.

Naga Priest is extremely underplayed relative to its power. It’s interesting to see how good it is and yet how reluctant the player base is to pick it up, despite it being the most board-centric deck in the format. It might provide an unappealing play experience, in which games feel lopsided due to the deck’s dependence on drawing Serpent Wig, or how hopeless it feels to play the deck once you’ve lost the board. But the bottom line is that the deck’s power level almost matches Warrior and Demon Hunter at top legend.

Beyond Control Warrior, Fel DH, Naga Priest and Vanilla Thief Rogue, it’s looking quite bleak. No other deck seems capable of reaching a positive win rate. There are some strong decks for the climb to legend. There are decent enough decks at legend, but you’re at a clear disadvantage if you play them instead of the best decks.

Balance changes will be coming today, so class sections are short as many of our findings may end up obsolete. We mention updates made to builds, but we generally figured out most things last week.

The Vanilla build of Thief Rogue is what you want to play on ladder if you’re focused on winning. Peasant is a very strong Warrior tech that’s a legitimate option at top legend, though it’s not strictly better. Besides Warrior, Peasant is only a net positive against Paladin, and it’s an active liability when facing Demon Hunter, which is another class that’s quickly growing in popularity.

The Control Warrior builds we’ve refined from last week look perfect. The Elemental build is the strongest and most well-rounded option, while the Dragomental hybrid is geared to perform better in the mirror, at the cost of other matchups.

Fel Demon Hunter was also refined effectively last week. The 30th card is either Viper or Okani. Viper makes sure the Warrior/Paladin matchups are not unfavored.

Swapped out Smothering Starfish for the second Jerry Rig Carpenter in Celestial Druid.

We’re so impressed with Vitality Surge in Holy Paladin after seeing more data on it, that we’re now suggesting running two copies, and cutting one Righteous Defense.

Didn’t collect much data on Piranha Poacher since last week, so featuring the most common build of Murloc Control Shaman.

Reduced the size of the secret package in the Vanndar variant of Big-Beast Hunter to include Quick Shots. Cutting Faelin from the Naga build looks very correct.

If you want to play a deck that’s as good as Control Warrior but without those pesky counter matchups, Fel Demon Hunter is the way to go. Super strong at all levels of play, with a good early game and powerful finishing potential. The featured build is perfect. The Viper tech shores up the Control Warrior/Holy Paladin matchups. If this deck somehow doesn’t get nerfed, it will probably take over the format. If it does get nerfed… this report explains why it’s probably a good move.