Welcome to the 236th edition of the Data Reaper Report! 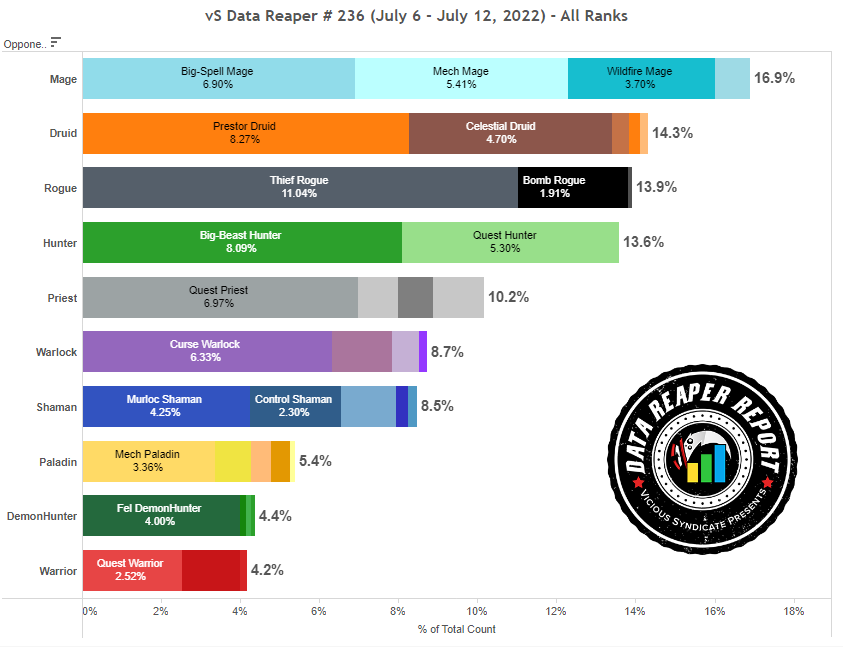 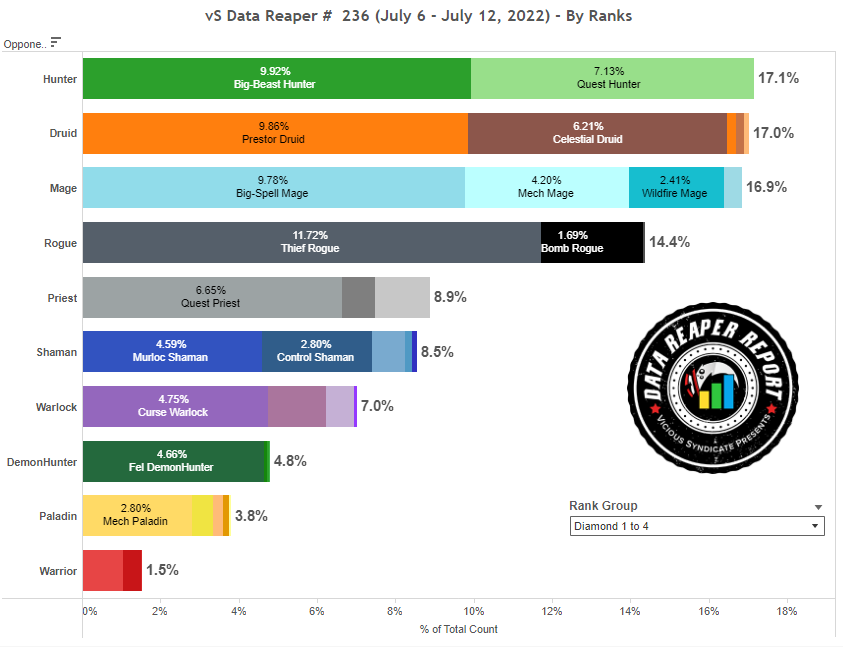 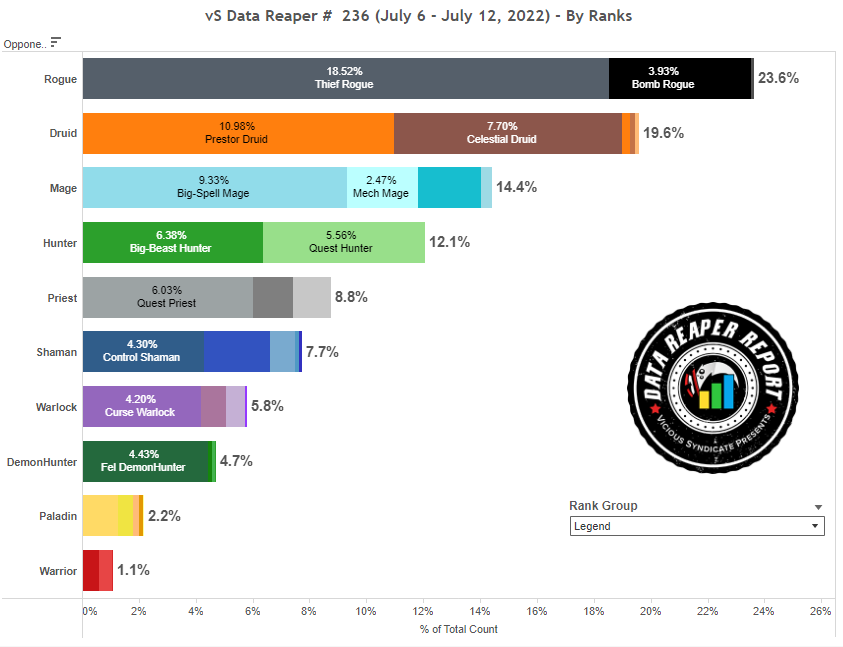 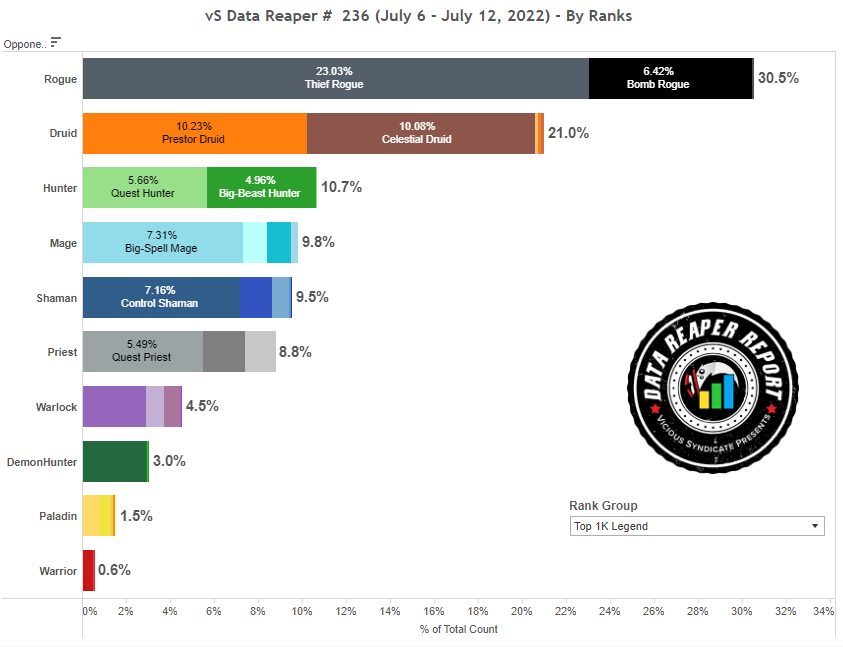 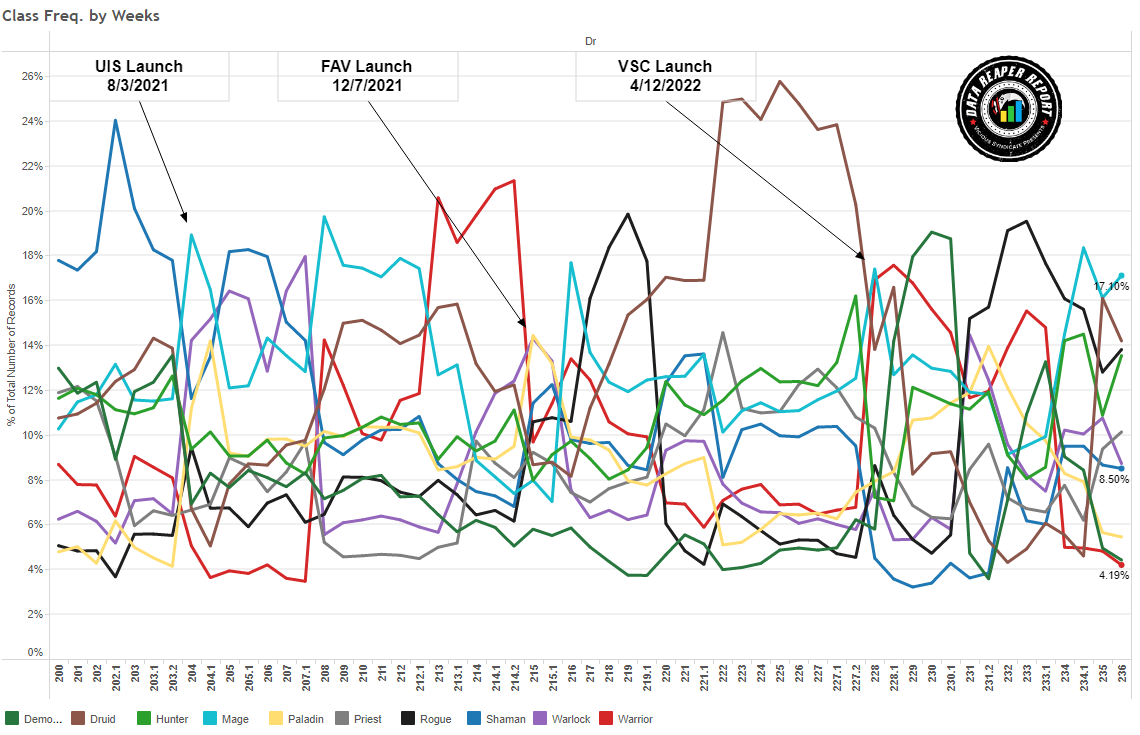 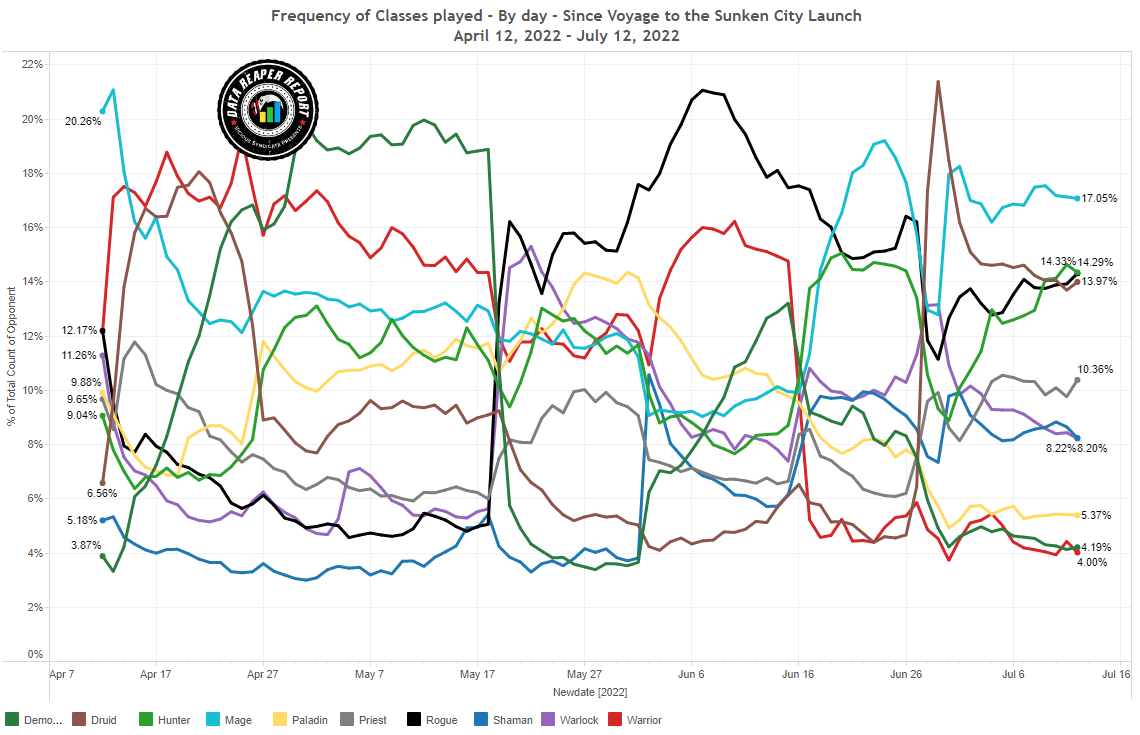 Rogue keeps rising in play, as it seems to be the class that players at legend tend to favor more than anything else. Thief Rogue is very dominant, with a decent amount of Bomb Rogue and a little bit of Quest Rogue starting to appear. The class sits at a 30% play rate at top legend.

Druid is another class that increases in play the higher you climb ladder, but there seems to be a decline in Prestor Druid compared to last week, which fits with the deck’s lukewarm performance. Celestial Druid hasn’t lost a step, on the other hand.

Hunter gained a lot of traction this week, with Renathal taking over both archetypes of the class. Quest Hunter has become more visible and popular. It’s now even slightly more popular than Big-Beast Hunter at top legend.

Mage is slightly growing at all rank brackets, with Big-Spell Mage’s success translating into increasing popularity. Mech and Wildfire Mage shrink at higher levels of play.

Control Shaman is another deck that’s seeing a bit more play, though outside of legend, it’s still not very popular, and you see more of the aggressive Murloc Shaman.

Quest Priest has historically seen more play than it should if you were strictly judging it on its performance. It’s no surprise, then, that the deck is growing now that it’s a decent ladder option with the highest win rate it’s ever displayed. Boar and Naga Priest are fading.

Warlock’s disappointing performance has led to its decline across the board, and it’s becoming increasingly rare at legend. Those who continue to play Curse Warlock are still mostly utilizing Renathal.

Fel Demon Hunter looks stagnant, with a decline in its presence that’s more noticeable higher on ladder. The deck didn’t perform poorly last week, but the rise of Renathal Hunters could be a major factor in scaring players away.

The player base looks very disinterested in Paladin and Warrior. The disinterest in Paladin is a result of the class’ stagnation and inclination to boast decks with low agency that players at higher levels despise (and if there’s no experimentation at higher levels, players at low ranks are less likely to pick up Paladin decks they saw a content creator play). Meanwhile, the disinterest in Warrior is a result of a simpler reason: the class is hot garbage. 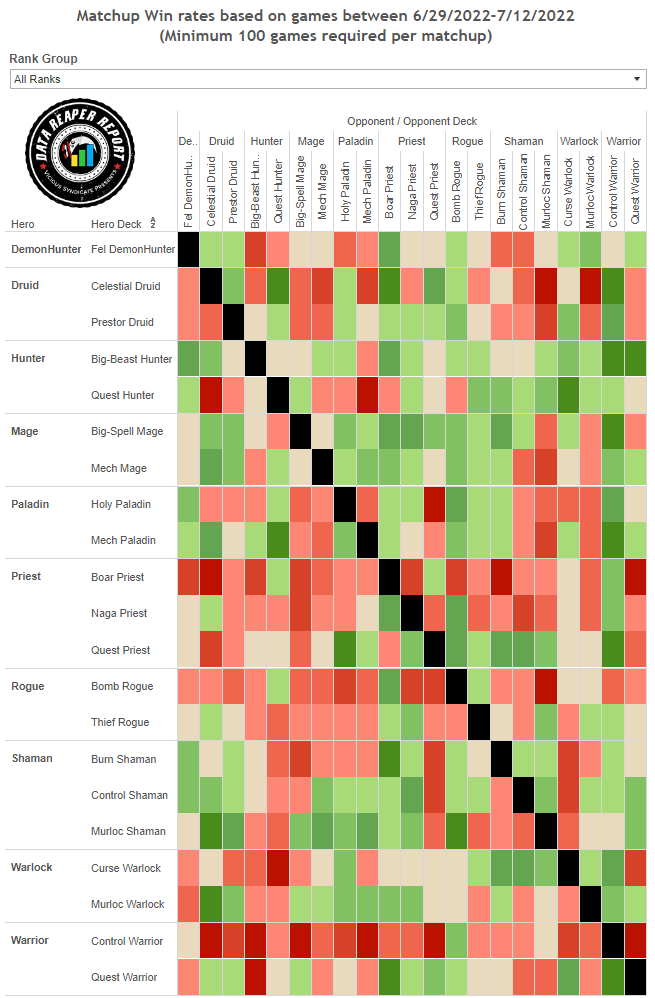 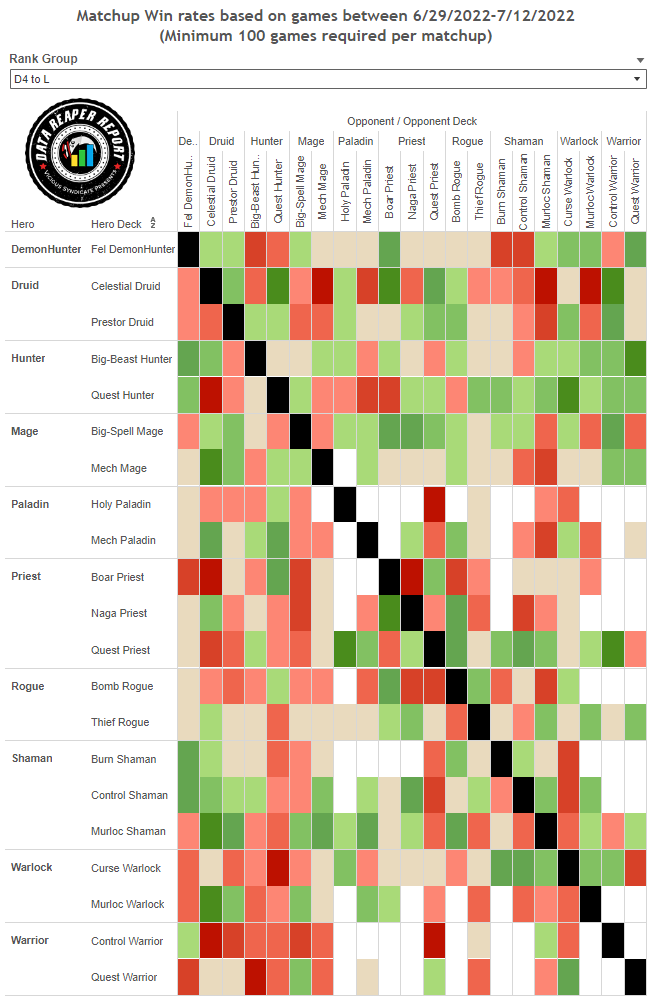 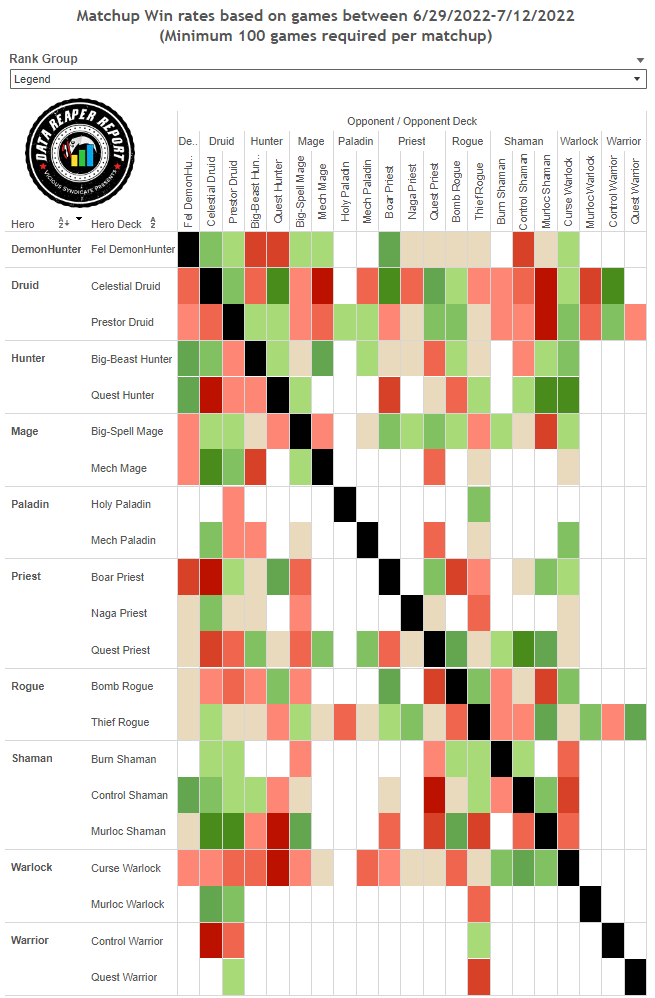 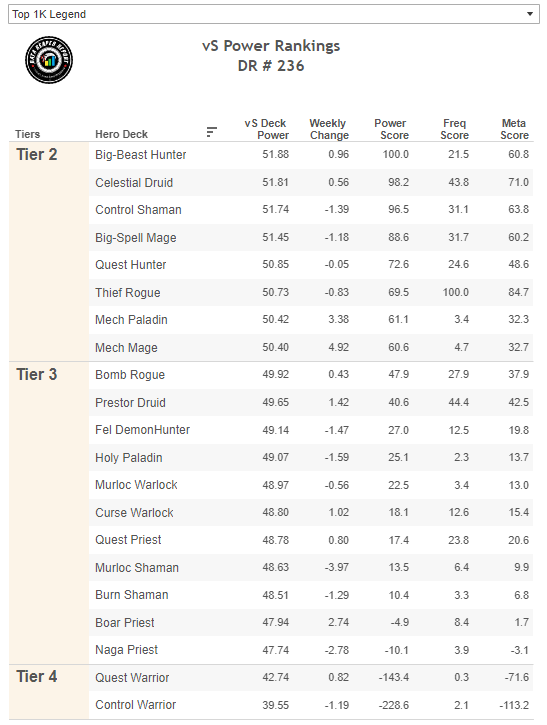 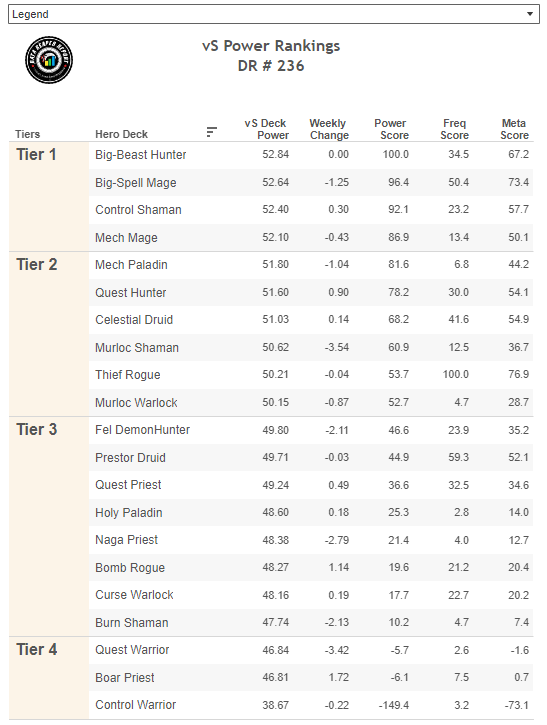 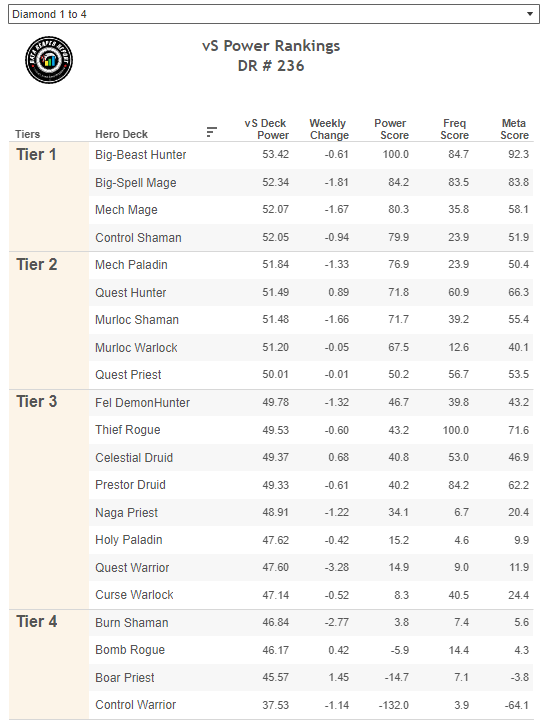 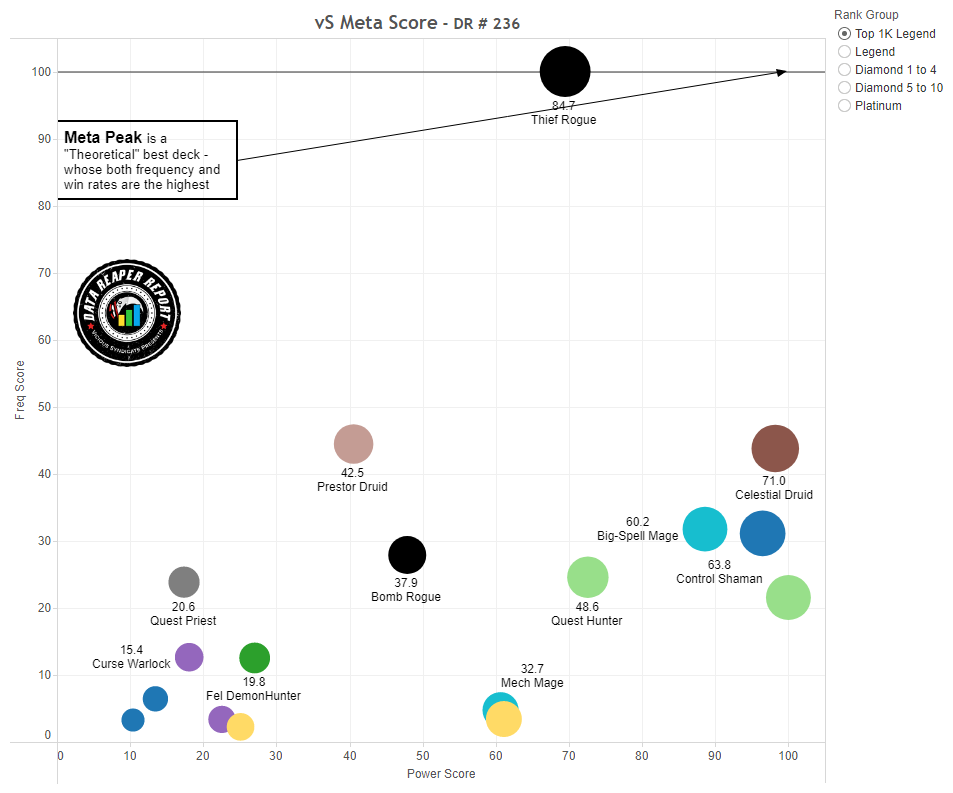 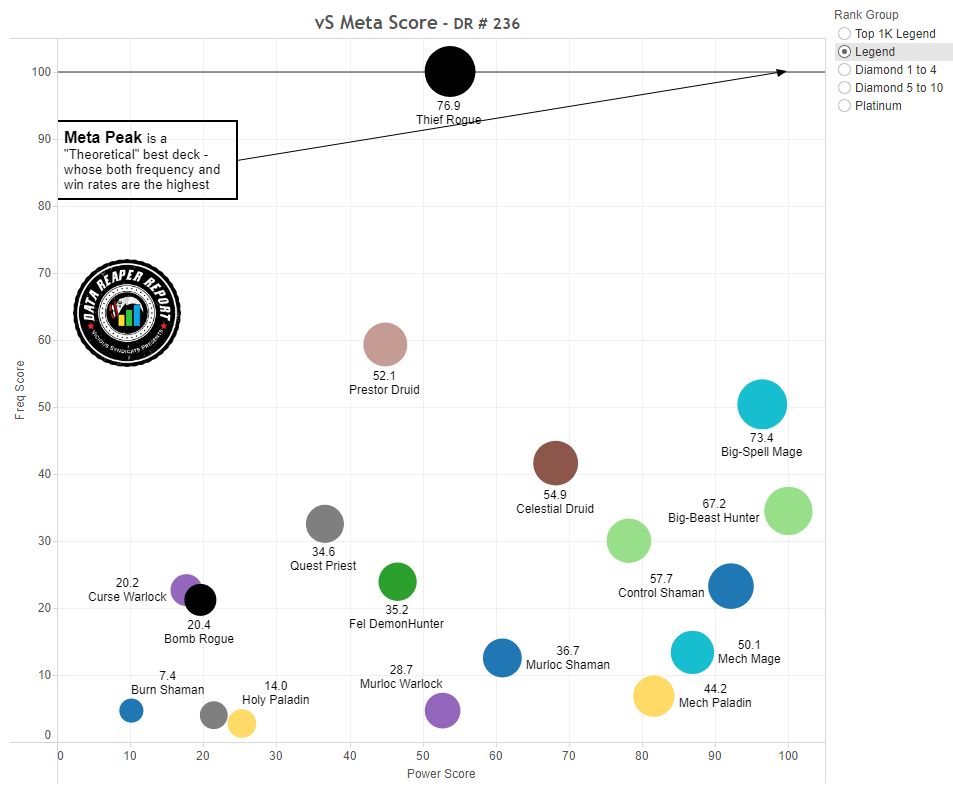 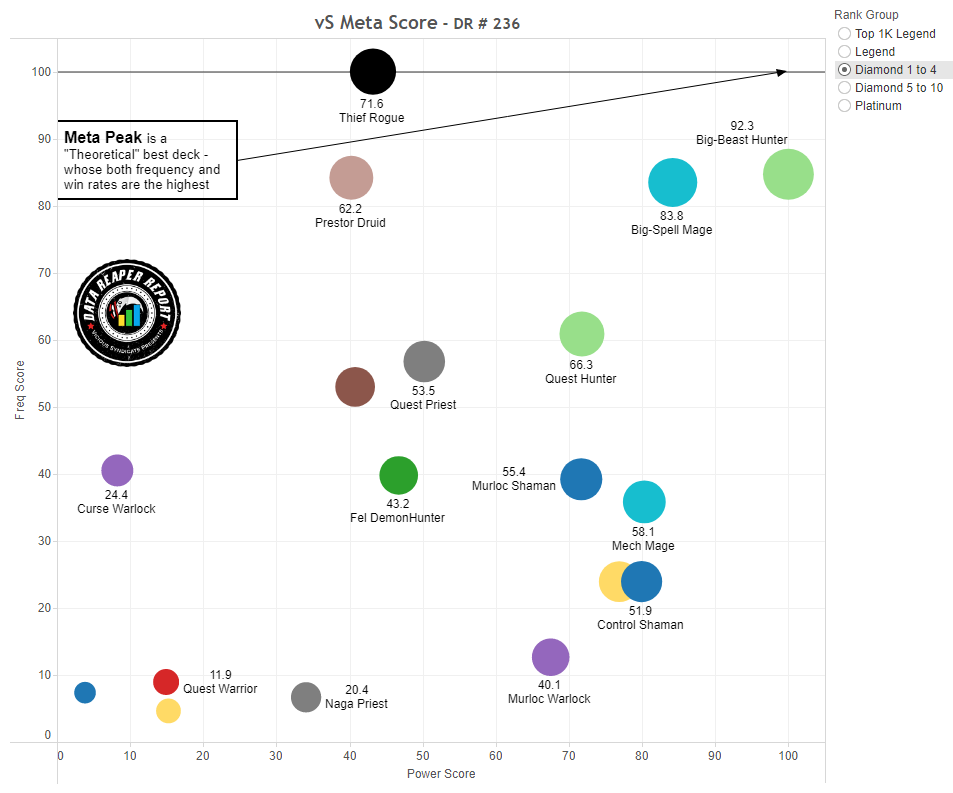 Beyond the two primary archetypes of the class, Quest Rogue is beginning to show up a bit. It sits at a reasonable power level (Tier 2 or Tier 3) based on its low sample. The featured build is the only one that sees a decent amount of play on ladder.

No changes to either Thief Rogue or Bomb Rogue. Tooth of Nefarian is clearly better than SI:7 Extortion in Bomb Rogue. The Stash variant is very comparable to the Vessel variant in Thief Rogue. It might be a little weaker outside of legend but is just as good at high MMR’s.

Prestor Druid has declined in play, leading to some recovery in its win rate. Celestial Druid is one of the strongest decks at higher levels of play. The XL Renathal build makes up most builds and seems to do better overall against the field. It’s currently more important to get to cast Celestial Alignment rather than what comes after.

Beast Druid has begun to appear after the database for this week closed, but based on the last 48 hours, you’re probably going to hear more about it next week. The featured build has begun to gain traction and looks very promising (at least Tier 2). We do wonder if Oracle is necessary here, considering how weak it is without Matriarch, but we couldn’t really work on this deck just yet.

Both Hunter archetypes look very solidified. There’s some experimentation in Renathal Big-Beast Hunter that involves running Humongous Owls alongside two Sabers and cutting Stormpike Battle-Rams as well as Ambassador Faelin. This is a legitimate path that looks very competitive and generally makes the deck stronger in slower matchups (most notably, Curse Warlock and Quest Priest) because you have more threats. Humongous Owl works well with Devouring Swarm too, making that card a lot better.

The Quest Hunter build that we cleaned up last week looks perfect.

Not much is happening in Big-Spell Mage, other than confirmation that both Brann and Mordresh are strong cards in the deck. This might be the first deck in which Brann is underplayed and underrated since he returned to the core set.

Control Shaman is a very versatile and flexible deck. It’s hard to nail down a list of 30 that’s optimal. We’re still leaning towards keeping Brann and Teachers. You can cut them to fit in Windchills, Glugg and/or Starfish. You can keep them and flex in Glugg and/or Starfish for Command of Neptulon.

An additional week of data helped us nail down the final slots of Renathal Quest Priest. We’ve noticed that last week’s build performed very well, better than any other build that we’ve seen. It functions near-perfectly in terms of curve consistency. However, cutting Call of the Grave and Gift of the Naaru hurts Lightmaw Netherdrake more than we would like, and we investigated the possibility of adding these spells back without hurting the progress we’ve made so far.

It’s possible, we just need to cut some luxury cards. Switcheroo is surprisingly one of them. The card is very weak past turn 3. In fact, it sets you back so much to play it at any turn later than 3 that it just doesn’t seem worth it, especially when you’d rather make a play that impacts the board on turn 3 anyway.

Another card that seems very suspect is Mi’da. You’re already stacked at the 6-mana slot and it’s the weakest turn 6 play. If you have enough time to play Mi’da without being punished for it, you’re already winning the game. The last cut is probably the hardest, so even though we like Finley a lot, it probably makes the most sense to cut it when we also cut Switcheroo. The other option is Serena.

This leads us to our final issue: the 5-mana slot. Spirit Guide is the only good 5-drop, but we would like to add another one just for curve consistency. Taelan seems to be the most reasonable option, especially if we can drop Murozond and guarantee a 7-drop being pulled. Murozond is okay, but not that great. You will usually complete your quest with Whirlpool.

Hunter is simple and effective. The class seems to benefit a lot from the low power level in the format. Huge swing turns have never been a prominent characteristic of the class, so it’s very comfortable in the current landscape where decks hit like wet noodles.

Big-Beast Hunter is thriving with Renathal. Probably the place where players least expected this legendary to fit in, but it’s taken the deck to another level because it covers up for the weak defensive tools at its disposal.

But maybe the bigger message is that you can pretty much play whatever you want. The gaps in power between decks are relatively small. Not a bad place to be as we prepare to receive a boost of power from the new expansion. The jump from Barrens to Stormwind felt like whiplash. Will it happen again?