Welcome to the 237th edition of the Data Reaper Report! This is the last report for Voyage to the Sunken City. 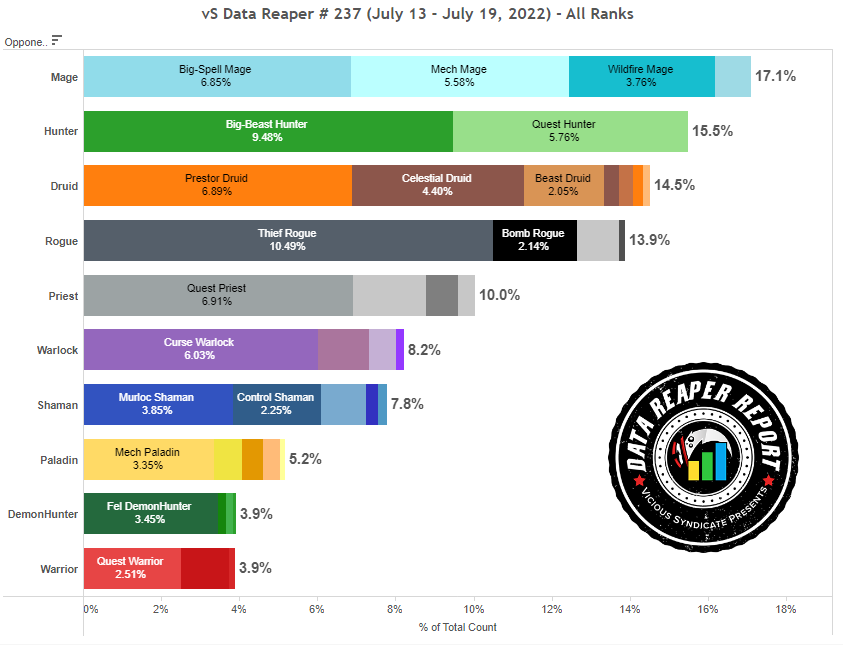 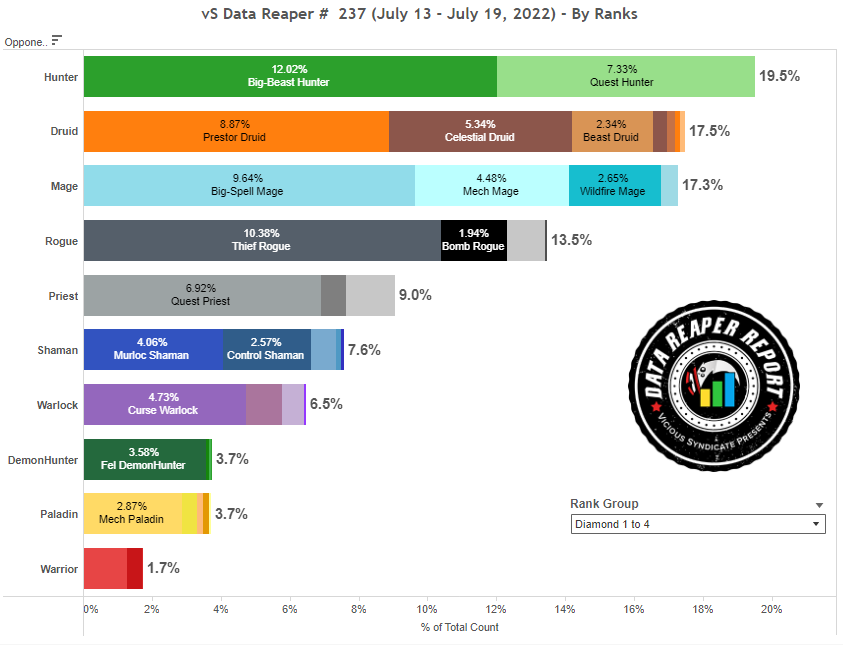 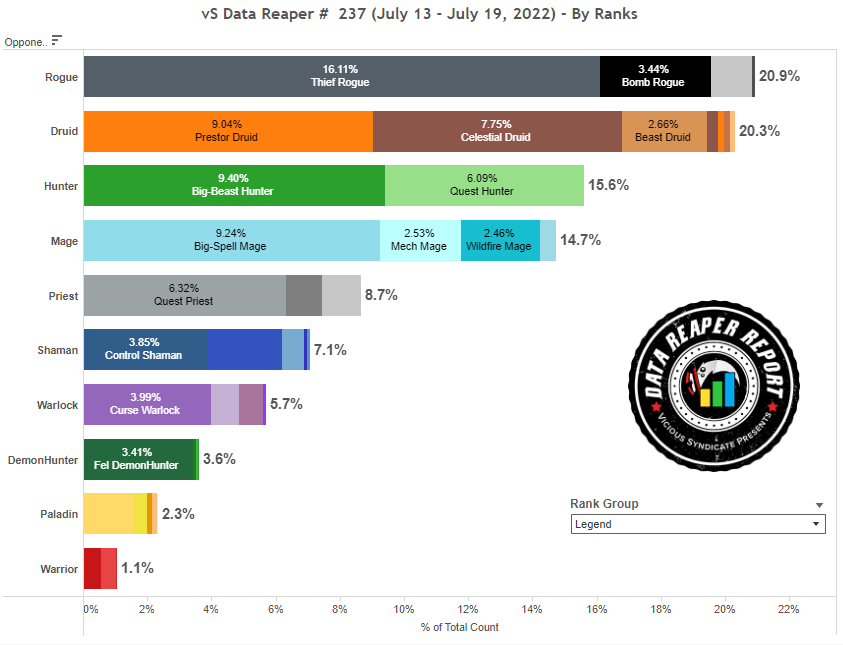 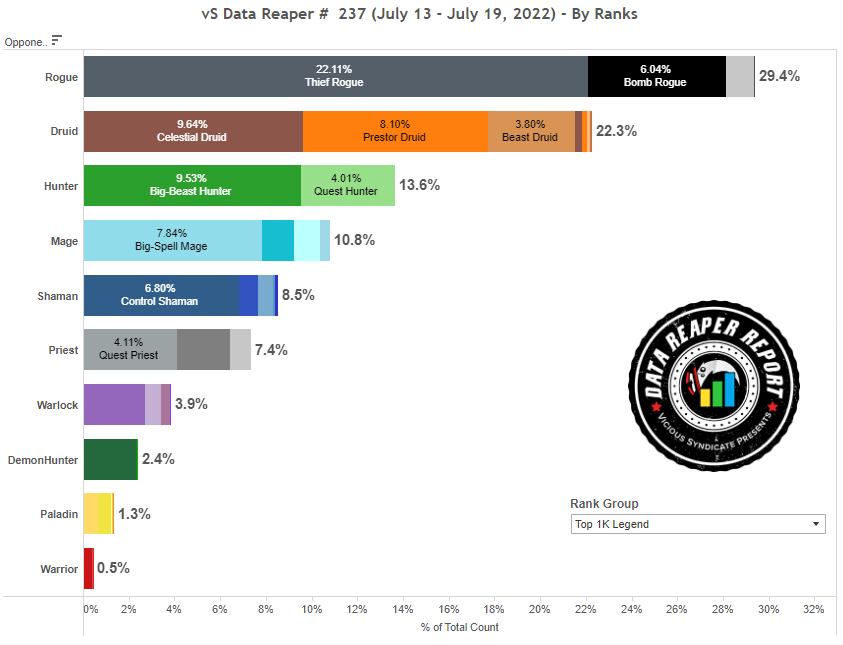 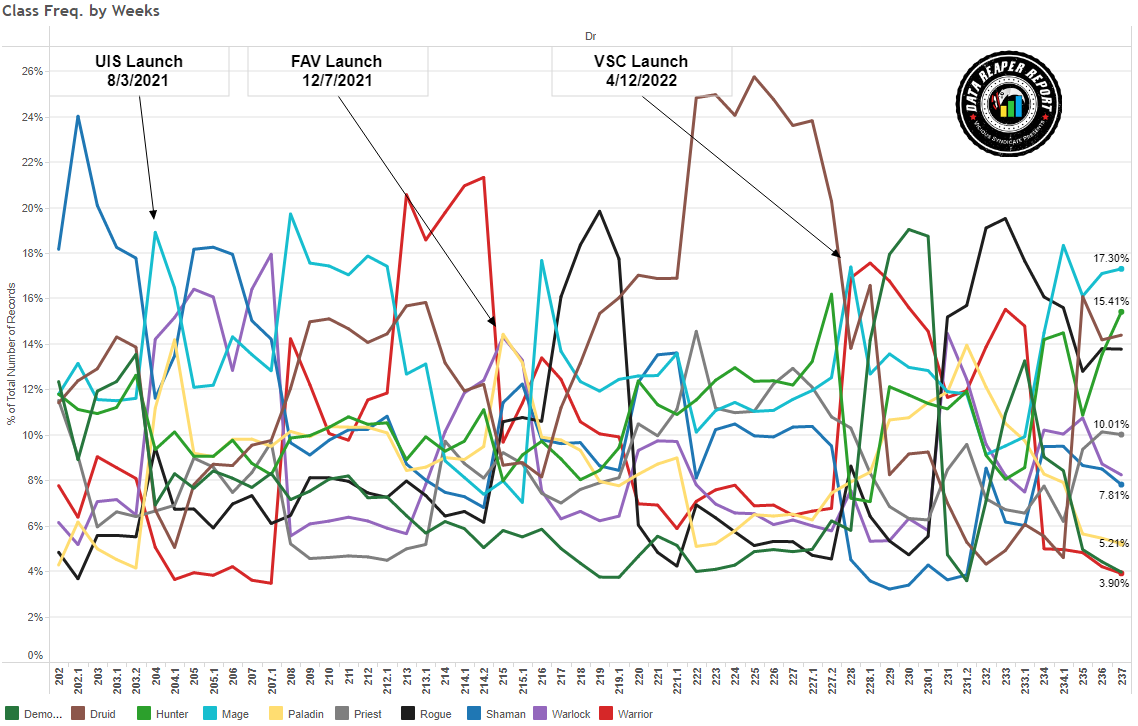 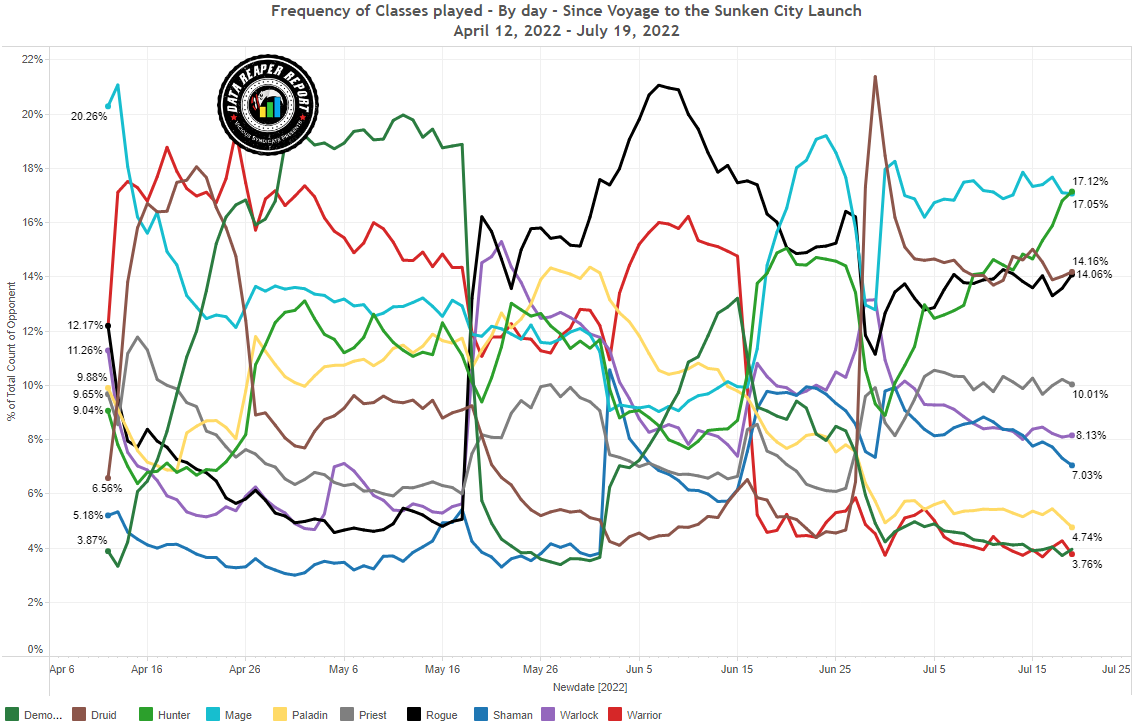 This will be a very short report, as we close out the Sunken City timeline. Changes in the meta are minimal while deck refinement has been solved (we’ve looked at all deck archetypes and found no reason to change any builds from last week). We will specify some highlights for the week, but we don’t anticipate further changes in the format until the new set arrives. While most classes look pretty settled down, there are some developments in Hunter and Druid.

Big-Beast Hunter is rising at all levels of play, but its rise is more dramatic at higher rank brackets. At legend, it’s seen a 50% rise in its play rate, while at top legend, its numbers have doubled. In contrast, Quest Hunter has slightly declined.

Prestor Druid is also seeing some decline in play, while Beast Druid has become noticeable after being non-existent last week. 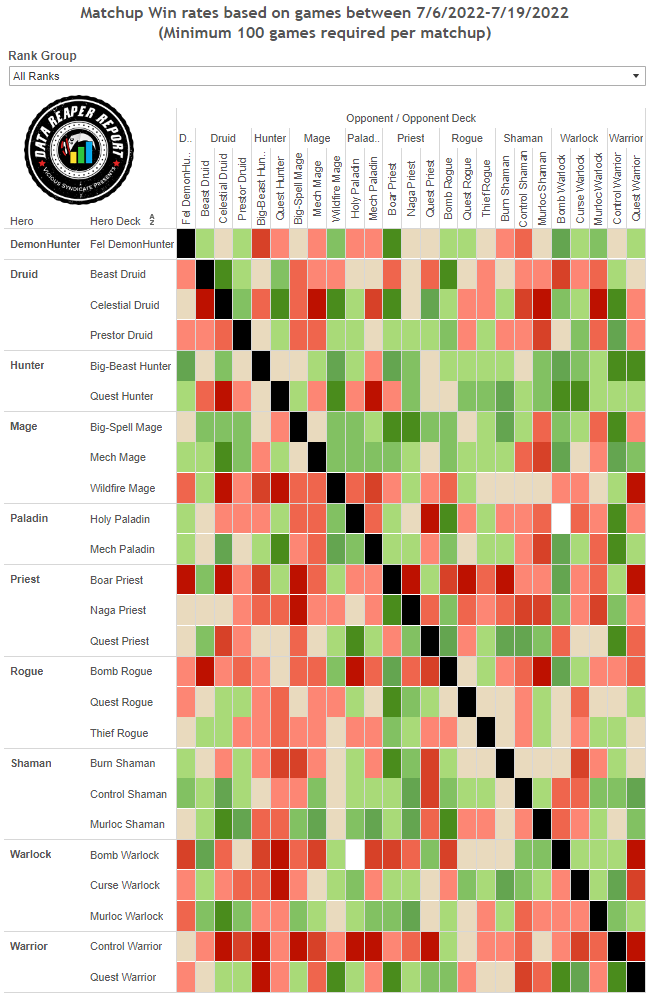 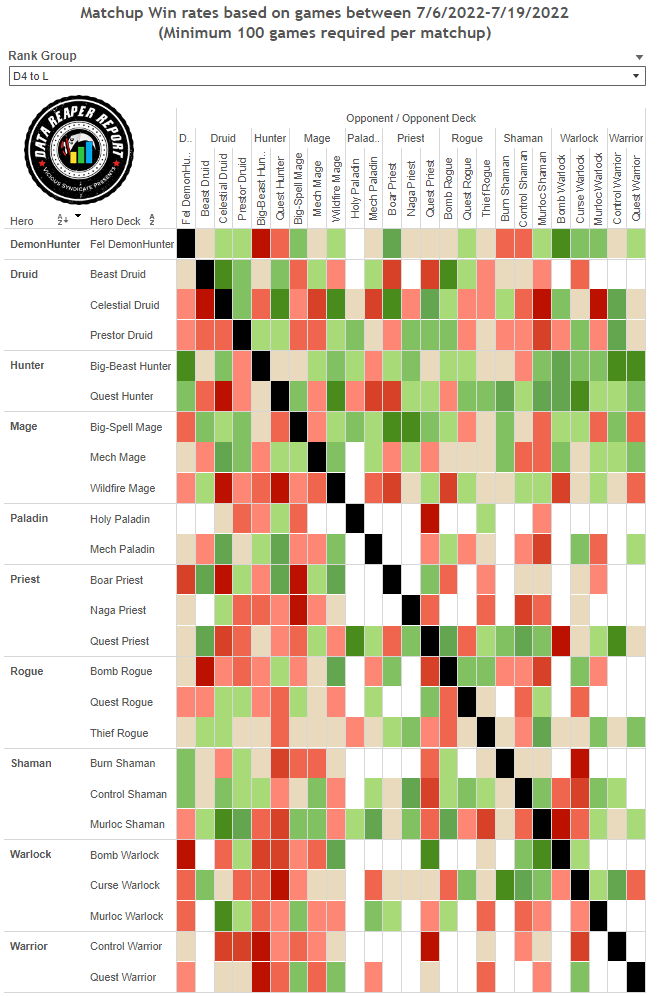 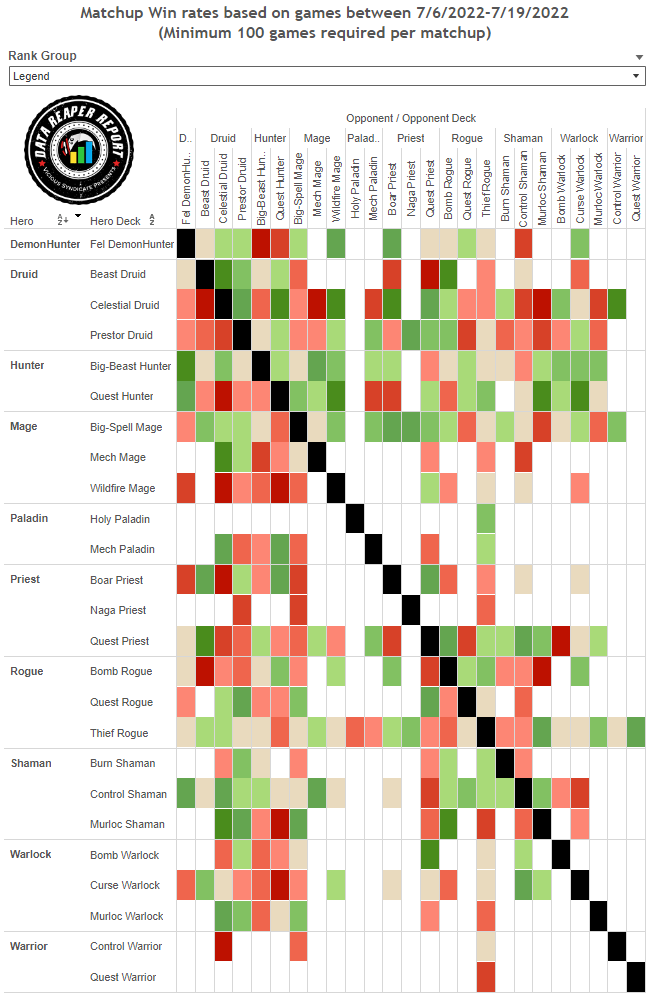 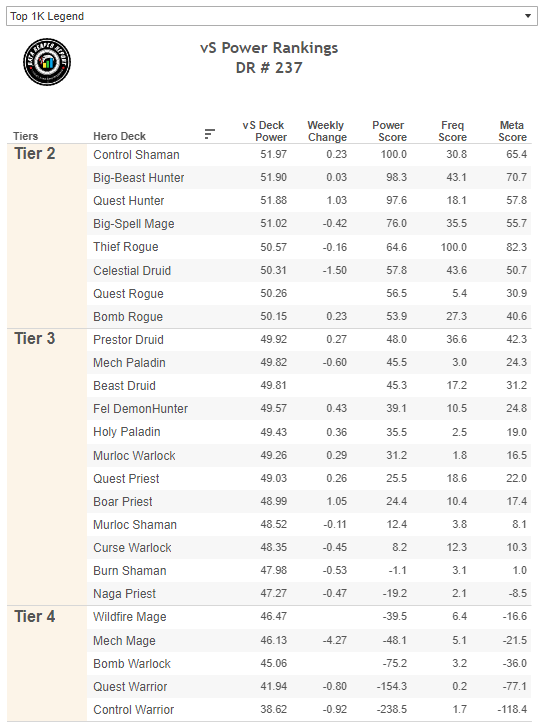 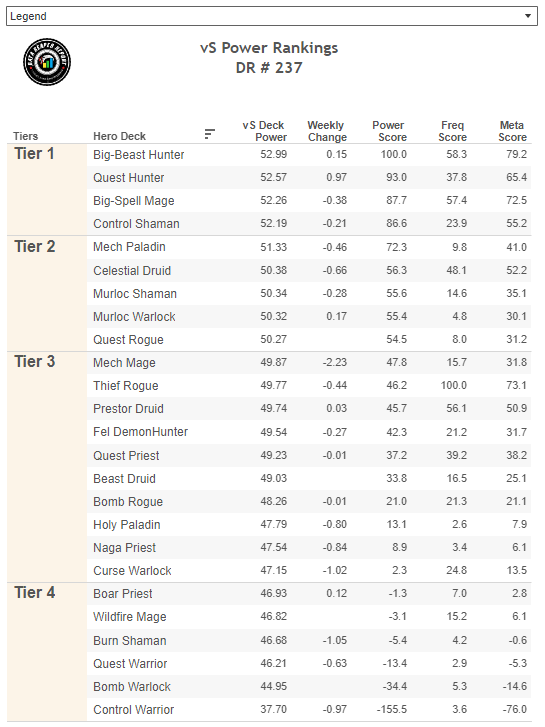 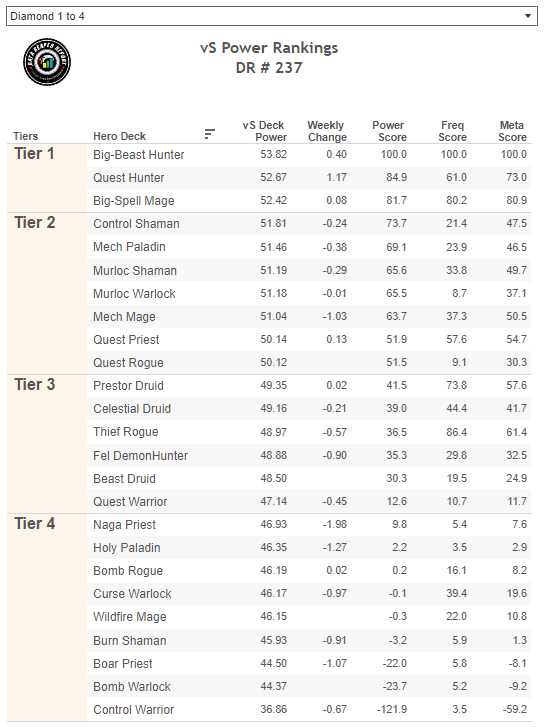 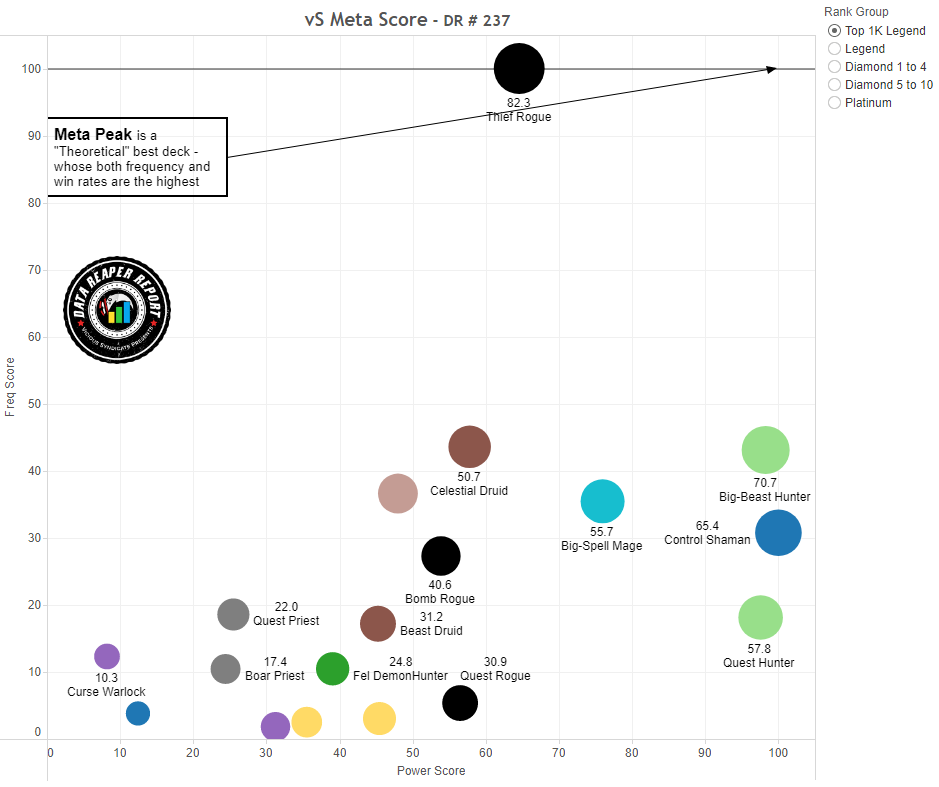 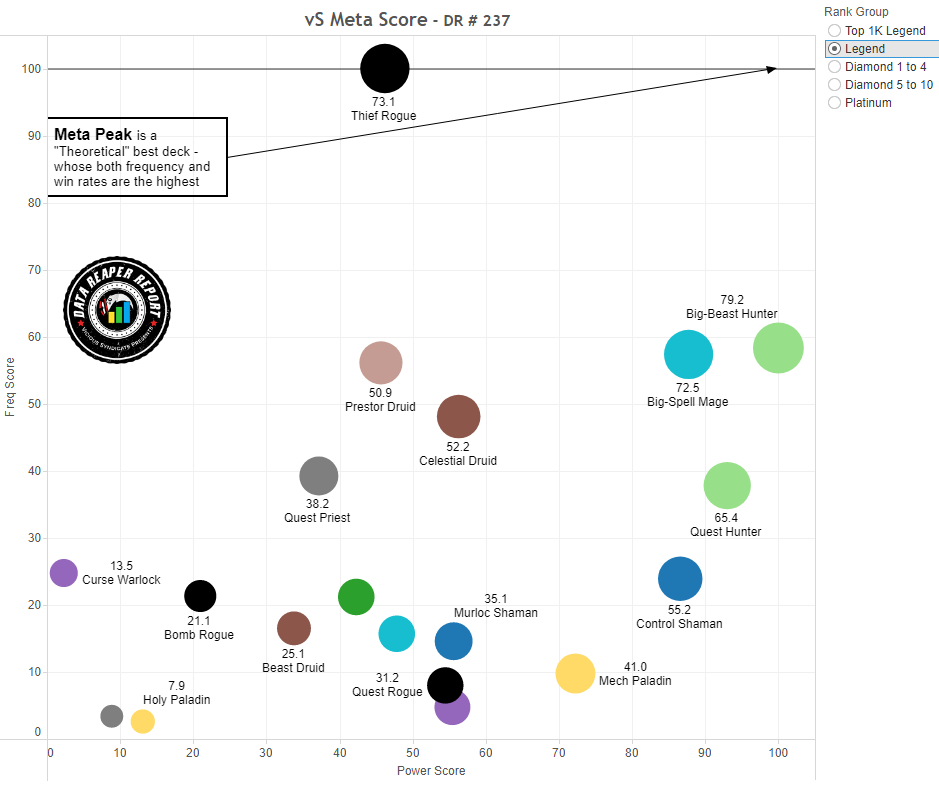 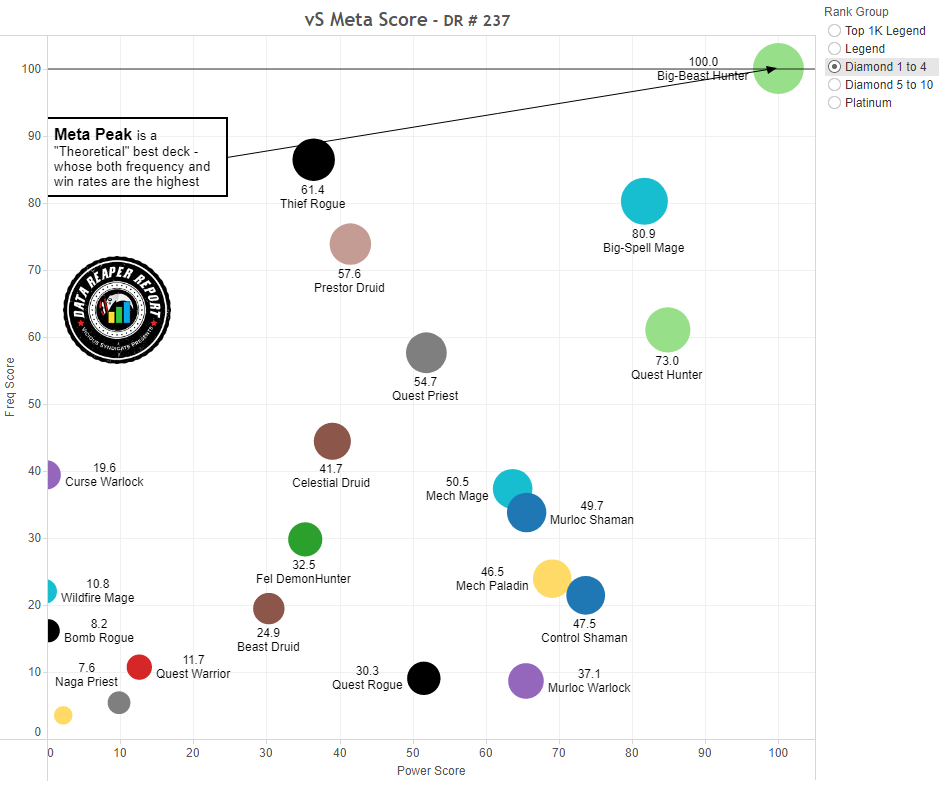 The meta isn’t too different from last week, but there are some subtle changes.

Throughout ladder, Big-Beast and Quest Hunter look like two of the best decks in the game. Quest Hunter has gotten stronger because its best build has gained a lot of traction, causing the archetype to be more refined and efficient. Big-Spell Mage and Control Shaman are the two other decks that impress us the most. They’re just very well-rounded and their counters aren’t particularly popular or attractive.

The format is very balanced. This is the second week in which no Tier 1 decks are observed at top legend. It’s obviously very close for some of the decks but the point is no deck is “running away from the pack”. Celestial Druid was close last week but started getting answered more aggressively and dropped off.

Even at lower ranks of ladder, there isn’t a deck that seems to be “too dominant”. Big-Beast Hunter is the best deck by a noticeable margin. It’s very good in the upper Diamond bracket and it’s particularly strong once you get to Platinum rank and below, but it’s not extremely popular. Nowhere does it get anywhere close to even a 15% play rate, so its presence is inoffensive compared to how absurd a deck like Quest Warrior was at low MMR’s before it got nerfed.

Quest Rogue and Beast Druid have arrived at the Power Rankings table. Beast Druid got worse once it saw more play and dropped off in its win rate over the last week. Quest Rogue looks decent, sitting at Tier 2 at all levels of play. There’s certainly a variety of options in the format and you don’t get massively punished by picking some of the weaker decks because the best decks aren’t that strong themselves.

A format with a low power level such as this one can certainly get stale eventually, so an injection of power and excitement is welcomed with the new expansion. We do see the value in tribal decks that received a lot of support in Sunken City. They’re very attractive for new players who want to pick up a deck that’s easy to build, easy to play and flavorful. It’s a good form of introduction to constructed.

The main issue with the current format is the lack of support for more complex strategies that promote higher player agency. Sunken City will be remembered as a very ‘basic’ expansion, where decks with a high skill ceiling and high player agency weren’t very prevalent or successful, compared to Stormwind and Alterac Valley. This affects a much lower percentage of the player population, but the high rank brackets are where content creators play. It’s the window for competitive Hearthstone, so it is important from a marketing standpoint.

We will now be taking a break from the reports and start preparing our expansion content. A comprehensive card preview, as well as a theorycrafting article, will arrive a few days before the expansion’s launch.

Hunter is the biggest winner of the post-Renathal format and things are looking very good for the class’ future because at first glance, its Castle Nathria set should be a positive addition to its toolkit.

But there will be a time and a place to talk about the new cards in this website. Look forward to it. For now, play some Hydralodons.