Welcome to the 243rd edition of the Data Reaper Report! This is the first report following the launch of Maw & Disorder. 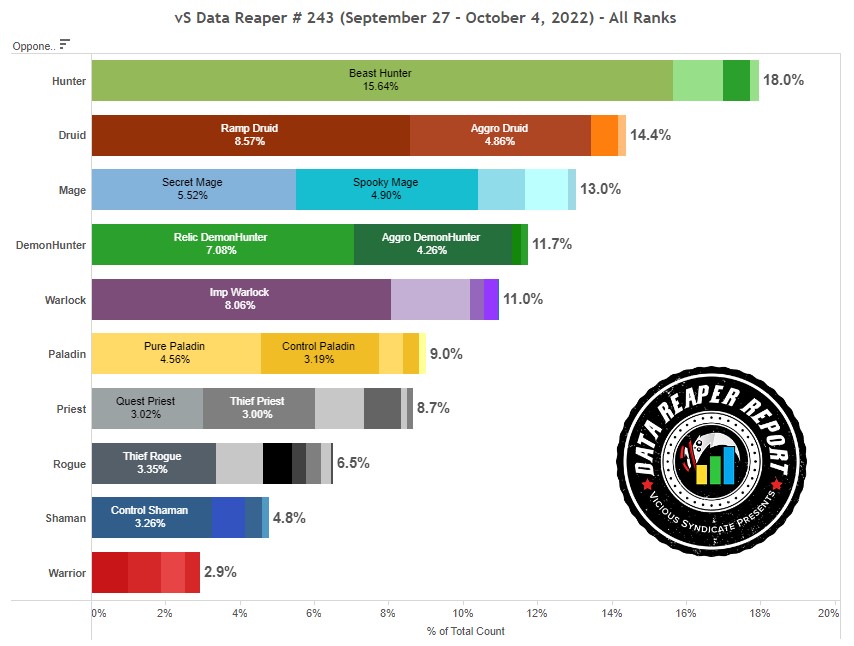 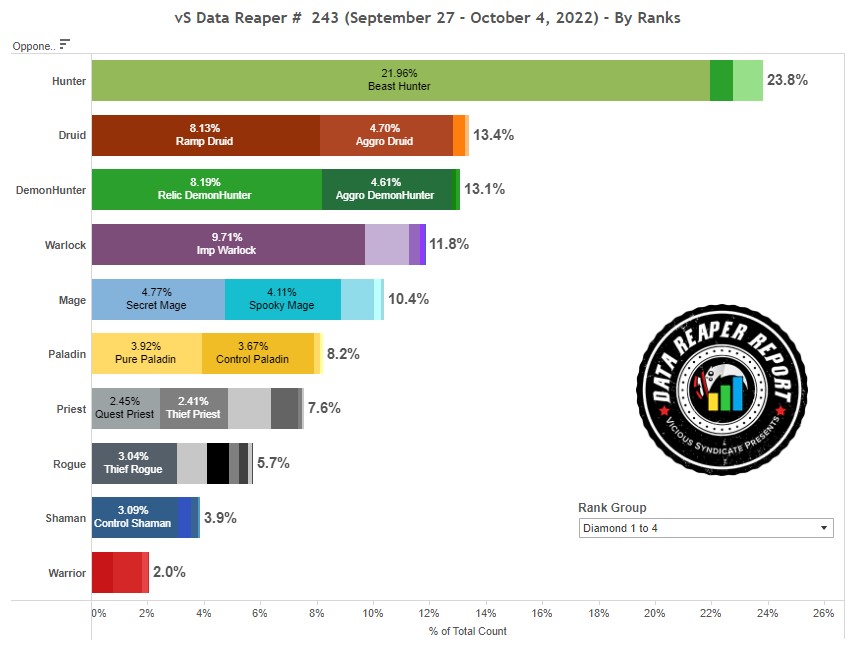 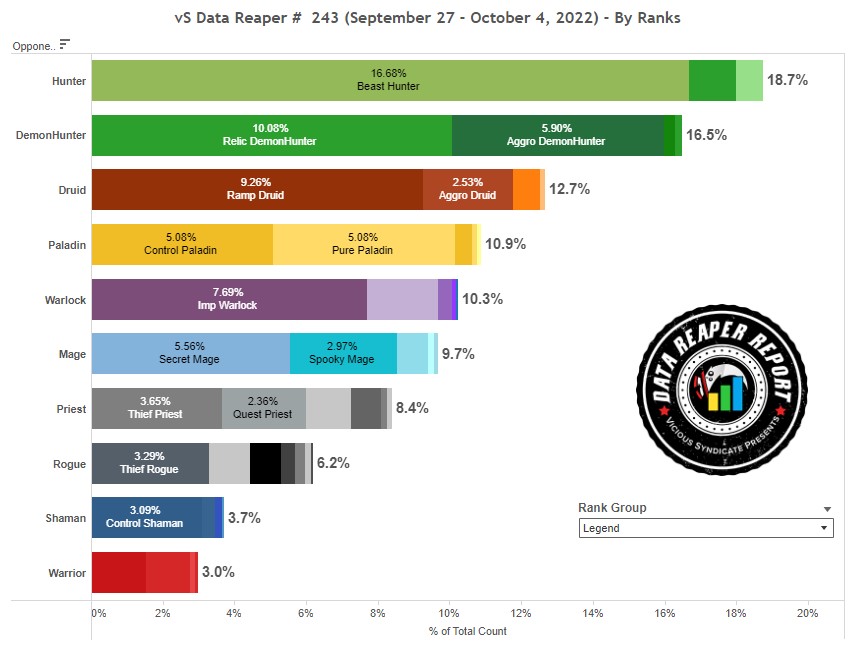 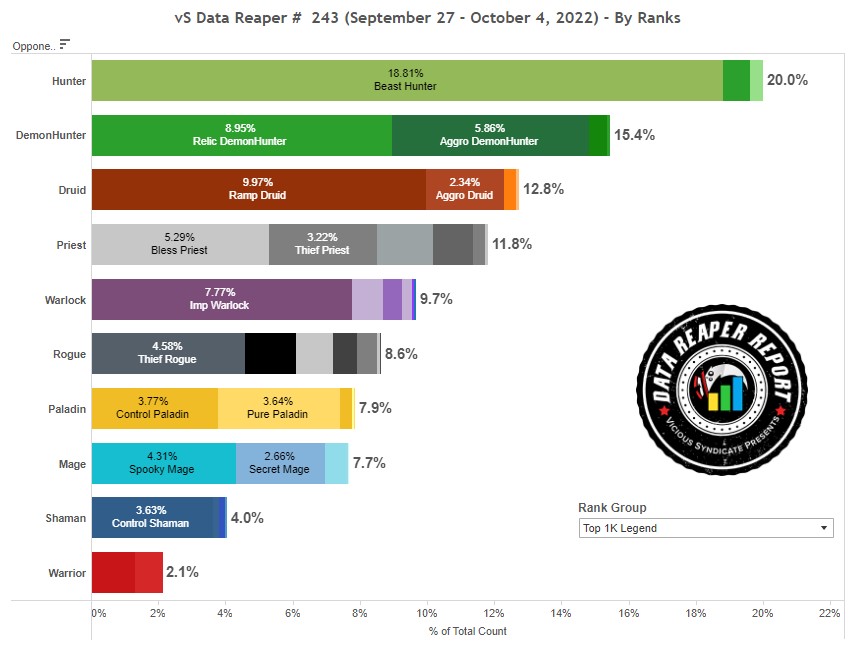 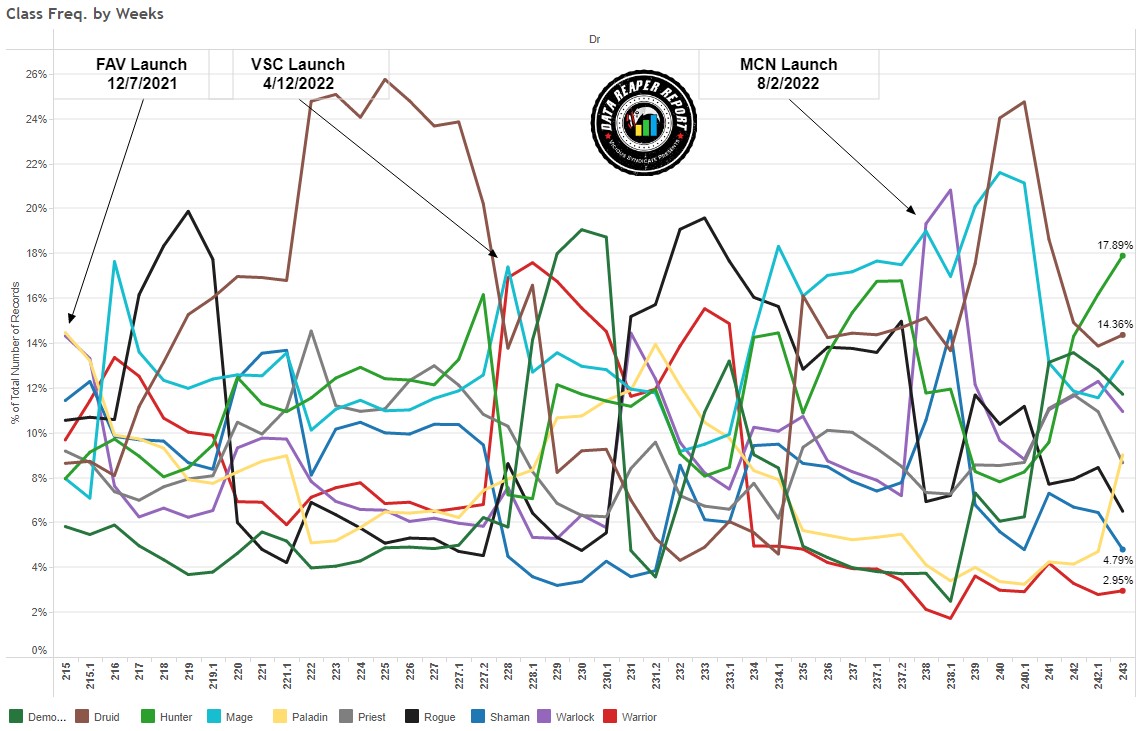 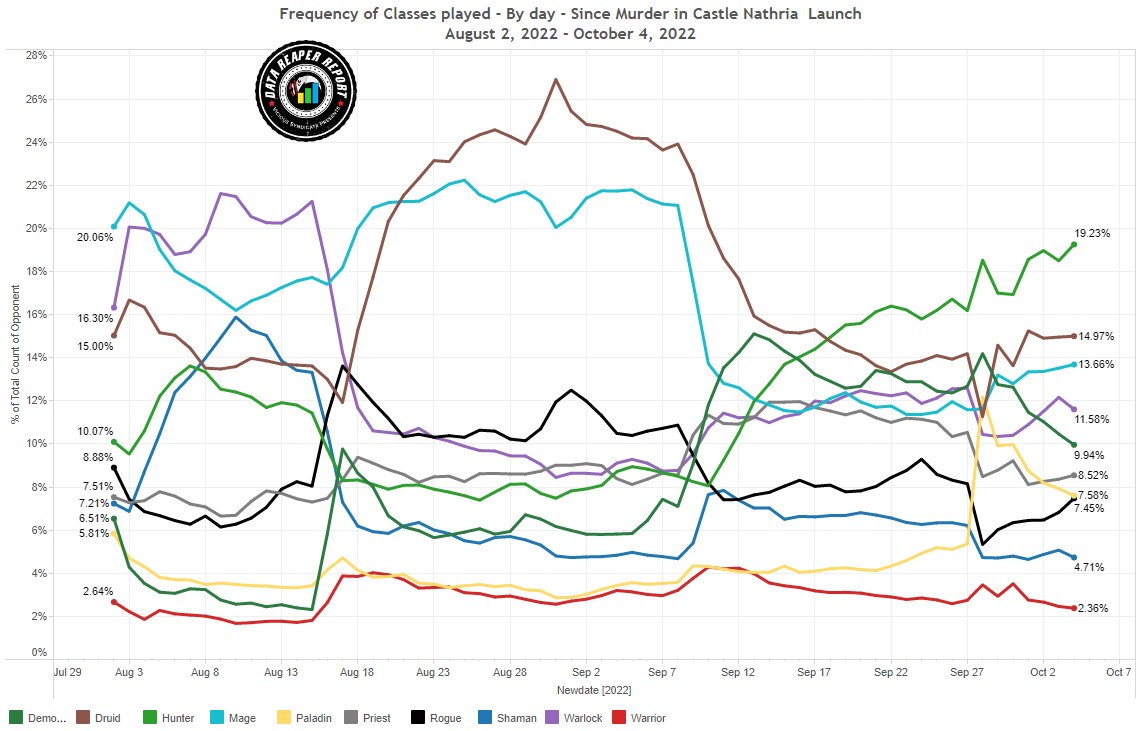 A mini-set was released last week but you wouldn’t be able to tell based on the play rate of Beast Hunter. It’s full steam ahead for the archetype as it has risen in its play rate this week. There’s a bit of experimentation with new cards but most builds have stayed the same. Rat Hunter has popped up in small numbers to try and carve out its own place in the meta, but there isn’t much traction there.

Relic Demon Hunter has drastically gone down in play, likely because of the rise of Hunter and the absence of exciting new cards for the archetype beyond Mel’Tranix. Aggro DH has attracted attention thanks to Sightless Magistrate, and the deck has become noticeable throughout ladder.

Ramp Druid has kept a stable play rate of slightly under 10% in every rank bracket, focusing most of its attention on changing its build to accommodate Dew Process, but some recent builds have passed on the card. Aggro Druid isn’t trying out new cards.

Priest hasn’t had much to play around with. Bless, Naga, and Quest Priest are identical to their pre-patch iterations, while Thief Priest is the only deck that has tried to make a new card work in Incriminating Psychic. Boar Priest sees very little play.

Imp Warlock has remained the only relevant Warlock deck, with a split between Curse and non-Curse builds. Any other Warlock deck trying out new cards has met a swift end.

Paladin might be the class most positively impacted by the mini-set, with all of its new cards seeing play and experimentation. Pure Paladin is trying out different directions following the addition of Class Action Lawyer. There are “Dude” Pure Paladins running Bridge and Jury Duty. There are more defensive Pure Paladins similar to the ones we’ve seen before the mini-set, with a twist related to Order in the Court, some but not all including The Jailer. Control Paladin is a cluster that includes most Renathal Paladin experimentations, with Jailer acting as a popular win condition, but alternatives running Denathrius can also be found.

Mage has mostly received secret support in Objection and Contract Conjurer, so players have attempted to make Secret Mage work, and it has become the most popular Mage deck outside of top legend. Spooky Mage’s representation is modest, still split between 30 and 40 card builds, but Renathal is getting more popular. Big-Spell Mage sees little play.

The Shaman set looks like a complete skip, with the class ignoring new additions besides Sylvanas. Control Shaman remains the only noteworthy deck here.

Warrior is getting little attention. There are attempts to revive Control Warrior, but they don’t appear to be getting anywhere. Charge Warrior has disappeared, likely because of its oppressive matchup with Beast Hunter. Enrage Warrior added Weapons Expert but very few players care to play it. 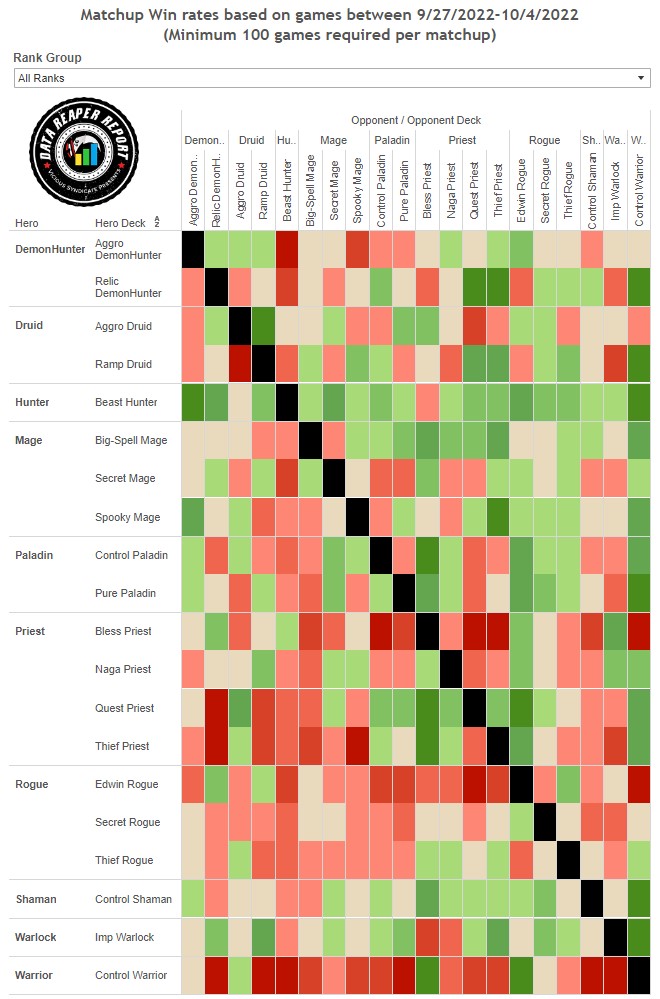 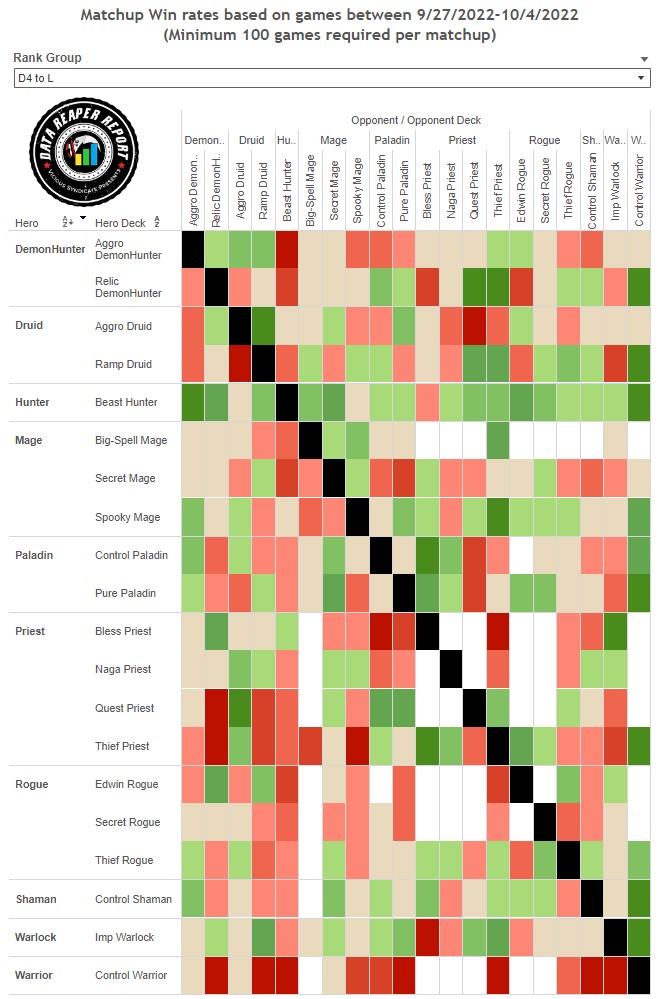 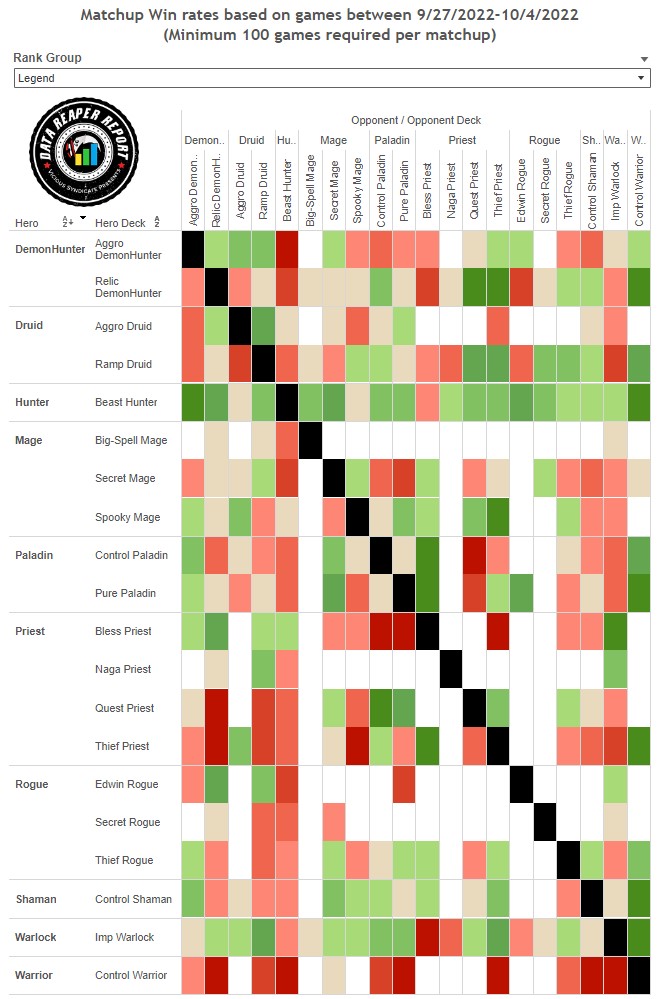 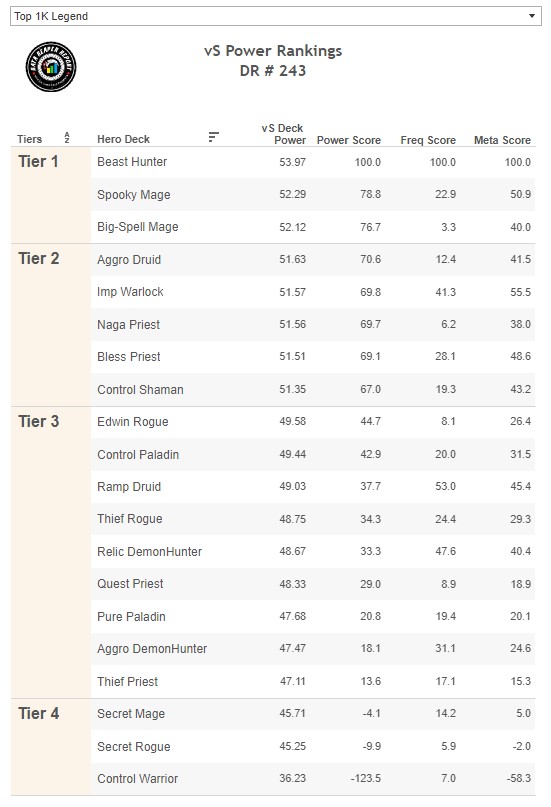 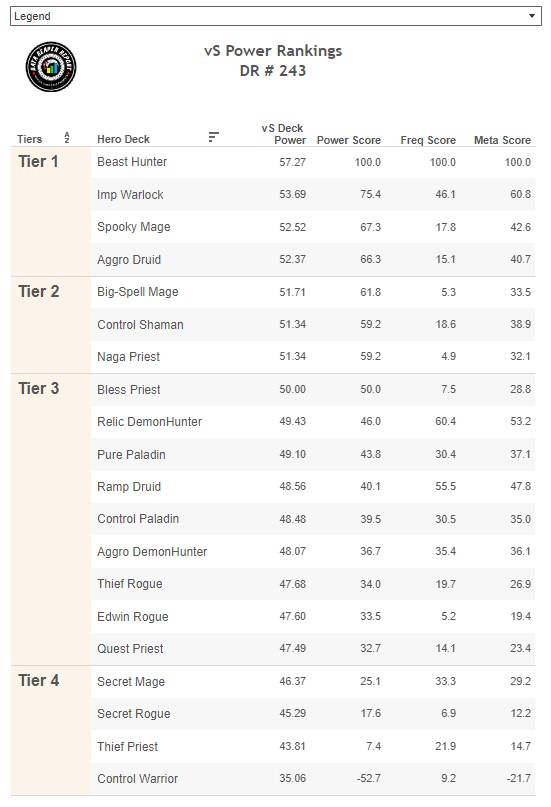 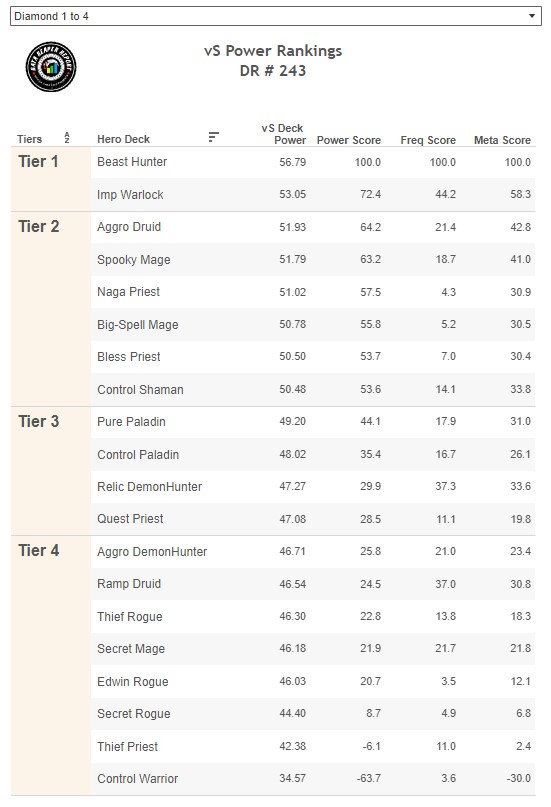 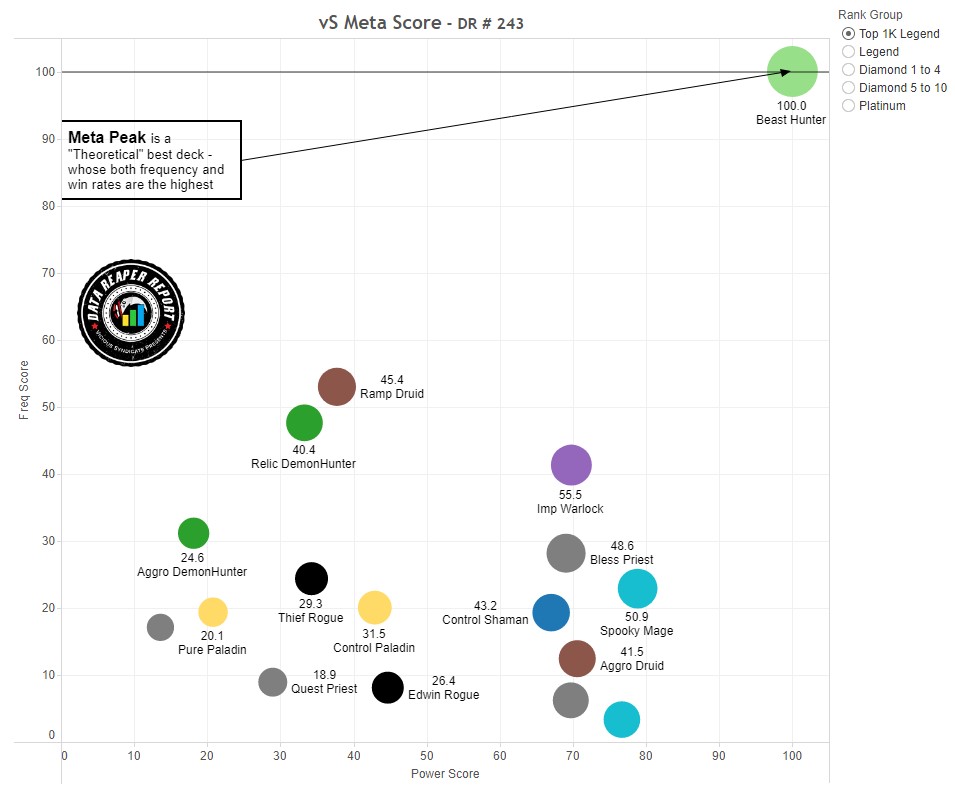 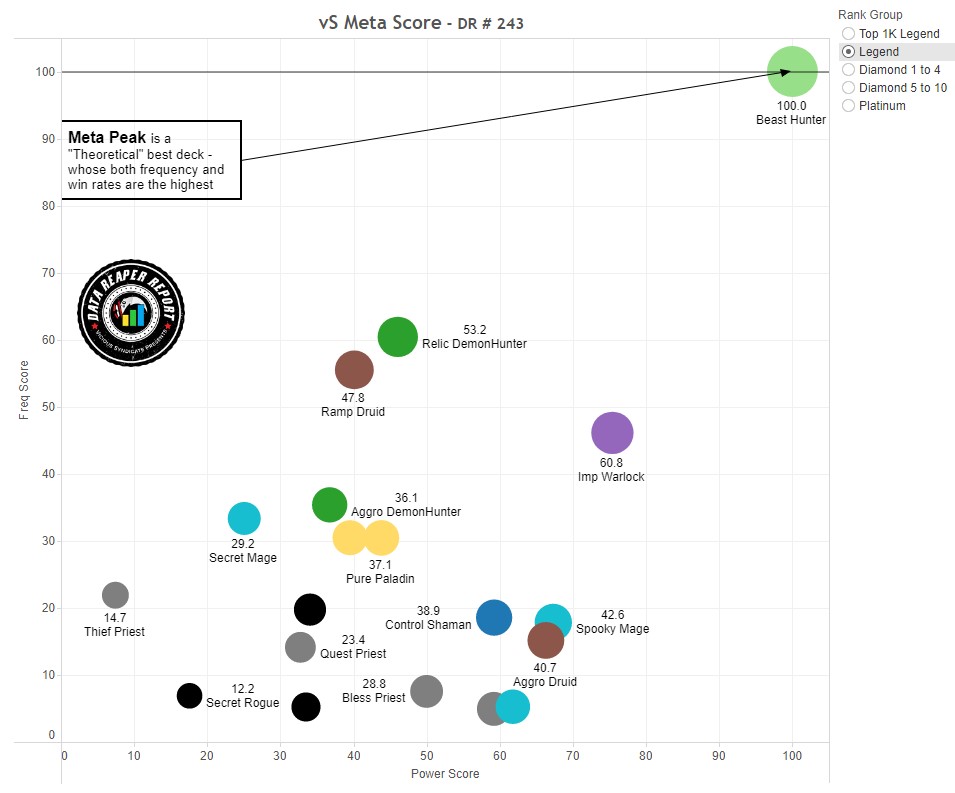 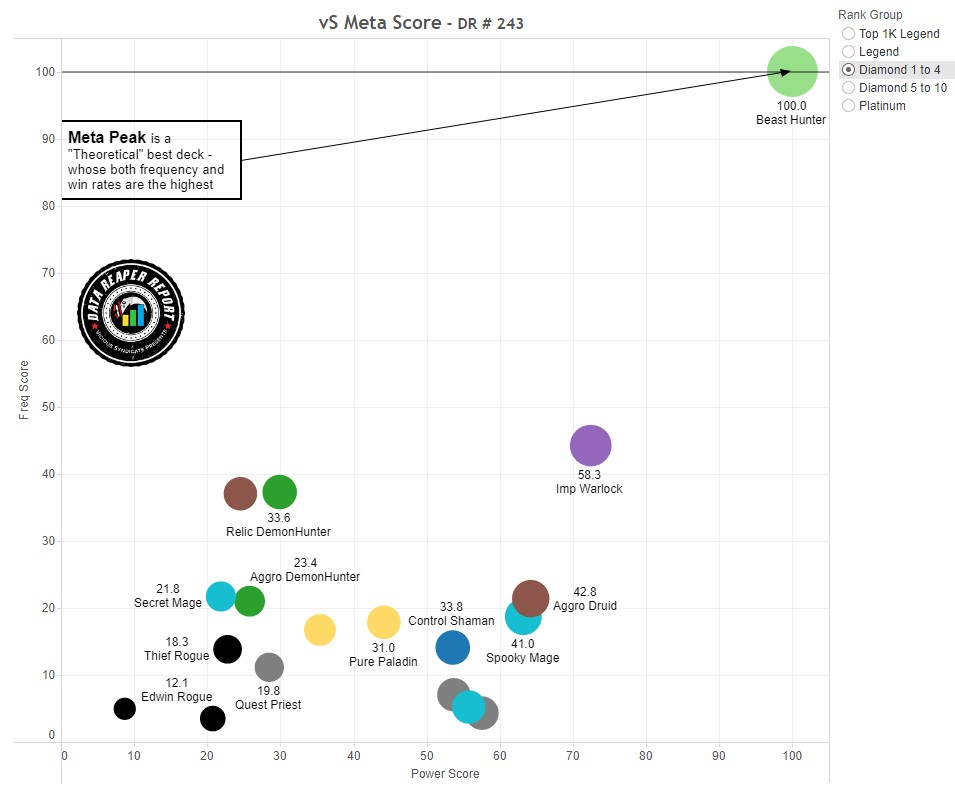 Beast Hunter looks stronger than it did before the mini-set. There’s been a debate between running School Teacher or Insatiable Devourer, but we think that you should be running both in the current meta and cut Kodobane/Tracking. The common criticism of Devourer is strange to us, as it’s a better card than Altimor in the deck, and nobody ever talks about cutting Altimor.

That leaves us with one extra slot for Sylvanas, a card that’s beginning to rise in play and looks very promising.

Another interesting card that’s seeing play is Nathanos. The issue is that it requires us to run Imported Tarantula, and likely other cards (Breeder, Swarm) for it to be consistent, and we’re not convinced this package is worth including over stronger standalone cards. This does help in the Bless Priest matchup, which is why it’s getting traction at top legend, but Sylvanas requires fewer deck slots to help in a similar way without hurting the consistency of your Collector/Saber plan.

When it comes to Relic Demon Hunter, the “Felic” variant outperforms the Topple variant, and the difference between them grows as you climb ladder, so we continue to recommend running the Jace build. We’re featuring a common Topple build for reference purposes.

The Felic variant can choose from 4 cards to include in 2 slots. Okani is commonly cut in favor of Mel’Tranix, but in the heavy Hunter meta, Okani tends to be superior. You can run both and drop Aldrachi Warblades, and you can run Smothering Starfish if you’re specifically concerned with a matchup like Bless Priest. It is likely that Mel’Tranix becomes a more important inclusion in the future should Beast Hunter get nerfed, as it is quite effective in other matchups.

Aggro Demon Hunter is currently struggling to handle the high presence of Beast Hunter, and the deck isn’t doing that well despite the important addition of Sightless Magistrate. There are two build concepts we suggest trying out, as we currently aren’t sure of the superior choice, especially after potential balance changes. The first build runs Dreadprison Glaive with Multi-Strike and is more reserved in its utilization of resources. The second build runs extra 1-drops, prioritizes flooding the board early and emptying its hand to maximize its reload tools. We like the extra 1-drops against Beast Hunter.

Dew Process has sparked a lot of experimentation in Ramp Druid. There are two builds that perform equally well and take advantage of the new card: A more defensive approach runs Far Watch Post while a greedier version runs Kazakusan and Amalgams.

However, over the last few days we’ve seen a new, Dew-less build that performs better than both. It takes the Defensive Ramp Druid we’ve featured before the mini-set, drops Naga Giants for the 2nd Kelpkeeper and Sylvanas, and swaps Smothering Starfish for Attorney-at-Maw. Attorney’s cheaper cost compared to Starfish makes it quite appealing as a soft removal option, and Sylvanas is great in any Ramp Druid deck. Considering that Dew Process will likely get weaker following a certain bug fix, it might be best to switch off the card going forward, unless the meta drastically slows down for its milling potential to matter.

Aggro Druid might prefer running Composting over Crooked Cook. We will note that both cards kinda suck, and it’s about picking the least bad option. Composting is very good against Mage, and we expect the class to rise in popularity after this report.

The only Priest deck that has changed following the addition of new cards is Thief Priest, with Incriminating Psychic encouraging the deck to run Amulet of Undying with Lightshower Elemental and Xyrella the Devout. Unless you’re TicTac, this deck is bad, and you shouldn’t play it on ladder.

Both Imp Warlock variants are very competitive and offer two of the strongest builds on ladder that don’t run Hunter cards.

The Curse build is stronger against Mages, slow Priests (Thief/Quest) and Shamans. Basically, decks that actively try to prolong the game and get hit with the inevitability of curses.

The Vanilla build is stronger against Hunters, Demon Hunters and Druids. We like starting the curve low, and then considering whether to switch off Bloodbound Imps for some “situational” cards. Denathrius is mostly good against Spooky Mage and Ramp Druid, and it’s not very useful outside of those matchups. Gigafin is good against Bless Priest, Naga Priest, Paladins, and other Warlocks (decks that struggle to kill the 7/4 from hand). Okani is great against Demon Hunters, but terrible against Beast Hunters.

Scribbling Stenographer is not a great card in Edwin Rogue. It doesn’t actively hurt the deck, but it might not be better than Backstab in the grand scheme of things, considering its anti-synergy with Edwin and Shroud. The margins are small.

Players are mostly running Renathal builds of Thief Rogue again. It’s hard for us to compare them to 30-lists, even though we know going 30 was better before the mini-set launch. The popularity of Renathal seems to be due to the Beast Hunter matchup, and the irony is that there is no indication that XL Thief Rogue is significantly stronger than Medium Thief Rogue against Hunter. This smells like desperation. Starting at 40 may theoretically put you at greater ease against Hunter, but your own power spikes through Jackpot/Trickster/Azshara are very important in this matchup. Not finding them in time just means you’re taking more time to lose the game by running Renathal.

The first is a Dude deck with Dun Baldar Bridge and Stand Against Darkness. We’re debating whether the 30th card in this deck should be Stewart the Steward or Lightforged Cariel, which sounds hilarious but isn’t that crazy.

The second is a normal Pure Paladin deck that just adds Order in the Court and Class Action Lawyer. Any build that tries to run Jailer looks awful.

Control Paladin shows more promise. We’re not talking about the Jailer variant of the deck (this one is also awful), but the Denathrius variant that was already popping up before the mini-set’s launch. Sylvanas looks very strong in this deck. The featured build has a decent matchup against Beast Hunter, while the problem matchup is Ramp Druid. When the opponent’s late game is too good, Paladin still falls flat, but it handles most other opponents quite effectively.

Spooky Mage is capable of soft countering Beast Hunter by running Renathal and Denathrius, so run the featured build for the best way to deal with them outside of Bless Priest. We can see Commander Sivara being replaced by another card if there’s a good reason behind it. Going 30 loses to Beast Hunter right now, so it’s much worse.

Big-Spell Mage is very underrated right now. Run Spammy Arcanist over Theotar and Brann if you want to do better against Hunter. We even advocate running double Spammy as it’s hugely impactful in the matchup and doesn’t really hurt you elsewhere. Minion-based removal tends to be strong in BSM.

Sylvanas is a perfect addition for Control Shaman. This solves the 40th card question we had before the mini-set. None of the new cards Shaman has received move the needle anywhere.

Enrage Warrior is the only deck within the class that might be playable in the current meta. Weapons Expert looks like an impactful addition, but Enrage Warrior doesn’t see enough play for us to properly refine. Just run the hero card.

Maw & Disorder was weak, leading to Beast Hunter remaining busted. We now fully expect this deck to be addressed through balance changes soon. There’s nothing that this deck does that’s super egregious when it comes to its play patterns, but it’s too well-rounded in a watered-down format in which power spikes and board swings are very underwhelming.

Remember when some players were clamoring for a board-based meta last year, with very little burst damage from hand, huge swings, and OTK’s? Your voices have been heard, loud and clear.