Welcome to the 245th edition of the Data Reaper Report! 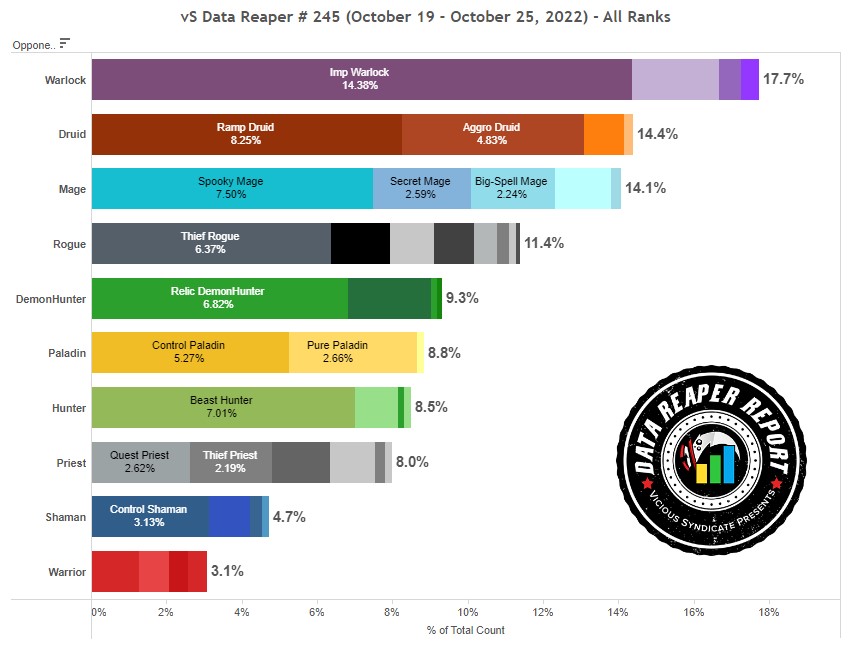 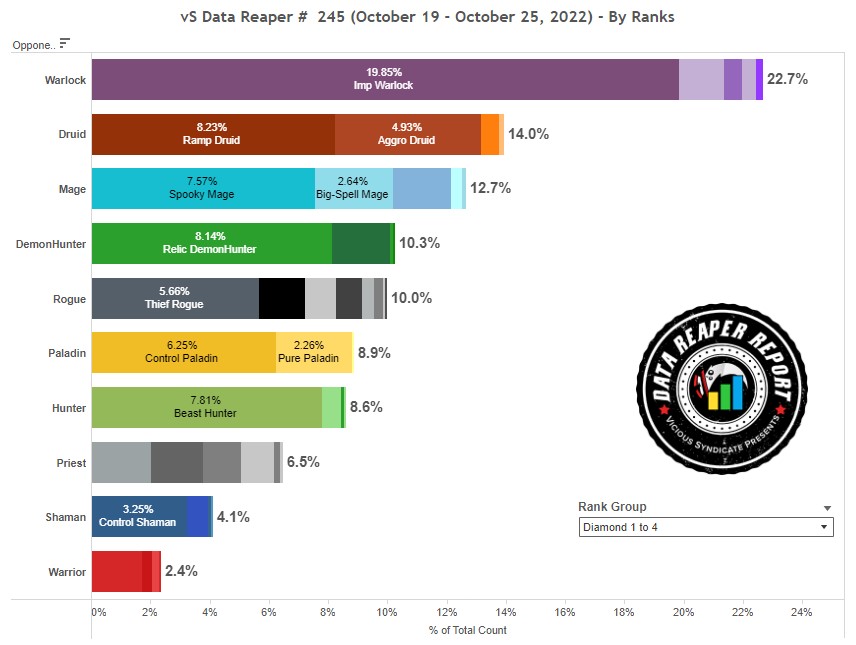 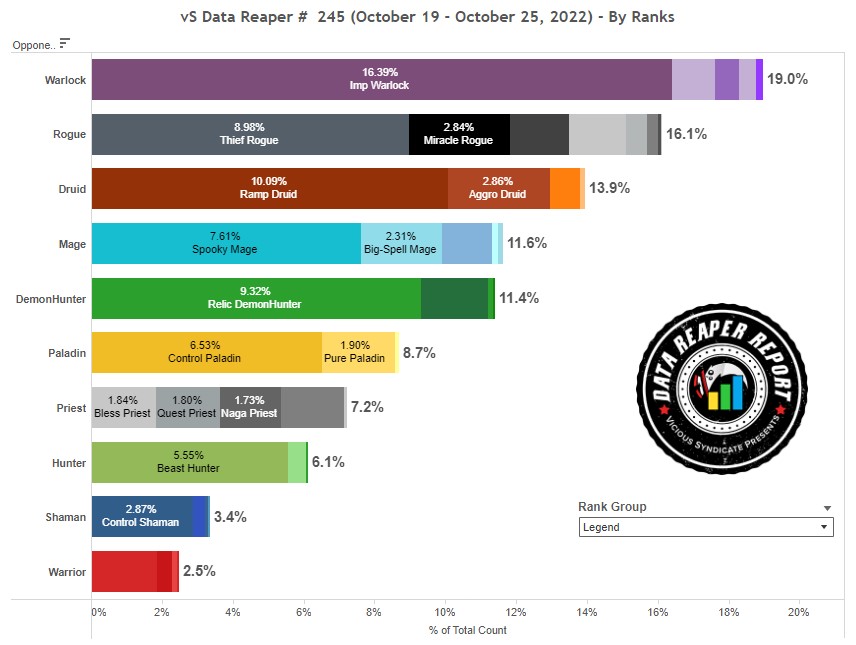 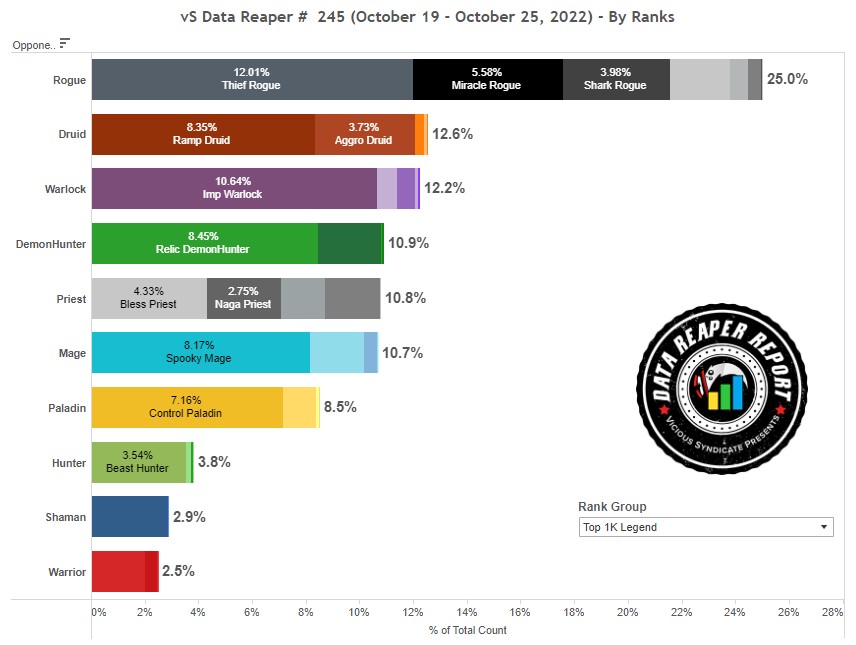 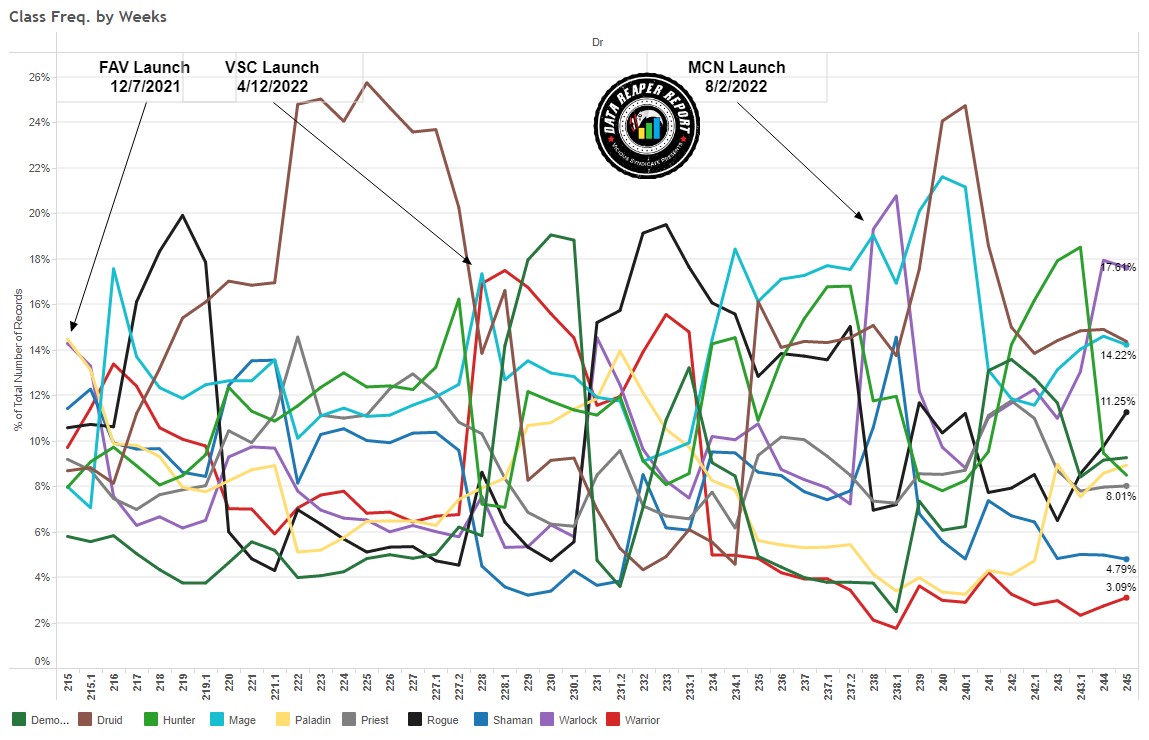 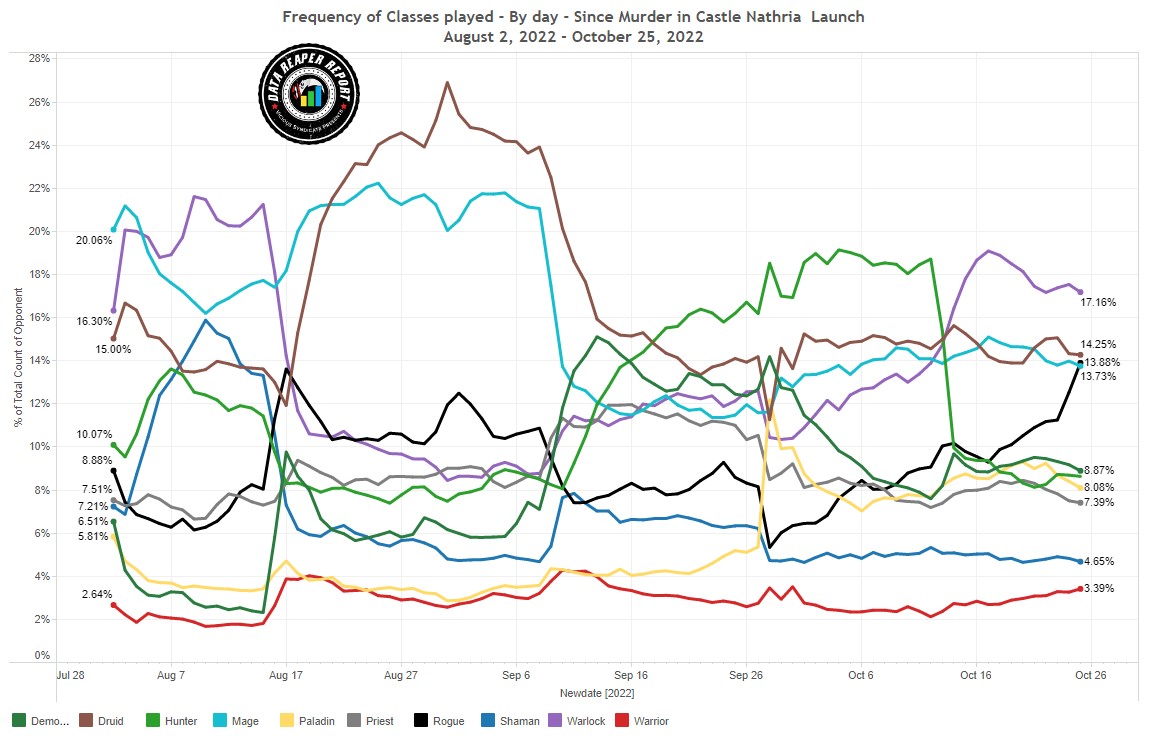 Rogue feels like a class at the start of a successful expansion. An explosion of different strategies can be found. Almost every archetype seems to have two equally viable builds. A new variant of Miracle Rogue is making waves, as well as a new approach to Shark Miracle Rogue. Thief and Secret Rogue are experimenting with new cards, and even Bomb Rogue is making some noise. All Rogue decks are quite skill-intensive as well, which is why they’re highly concentrated at top legend.

Imp Warlock remains the most popular deck in the format at most levels of play, only dropping to 2nd behind Thief Rogue at top legend. This small decline might be caused by the influx of Miracle Rogues at these ranks, which Warlock is generally not happy to queue into.

Ramp Druid is in decline, while Aggro Druid has risen a bit in play. This reflects their positions in the format, as Ramp Druid hasn’t been doing particularly well in the aftermath of the Hunter nerfs.

A small decline in Mage is noticeable, which is likely caused by the uptick in Control Paladins. We can notice that Spooky Mage players have begun to aggressively target this matchup in response.

Relic Demon Hunter is experiencing a refinement reversal, with players insisting on banging their heads against the wall with unplayable builds. This has negatively impacted its performance. A small uptick in Aggro DH can be observed, with players realizing this deck is alright.

Priest is a mini-Rogue. Lots of different strategies, though they have long been figured out and refined. Bless Priest has slightly declined at top legend. Naga Priest’s rise in play is minuscule. Quest Priest appears to gain priority over Thief Priest.

Control Paladin is rising in play and transforming. Following the success of several players, new Jailer builds have appeared, noticeably different from the first few that emerged the week before. The ability to hard counter Miracle Rogue and Bless Priest has earned Paladin much respect.

Beast Hunter remains very noticeable throughout ladder, though high-level players have begun to ignore it a bit. Control Shaman is generally ignored by everyone. Warrior isn’t seen much despite Enrage Warrior’s ability to compete. 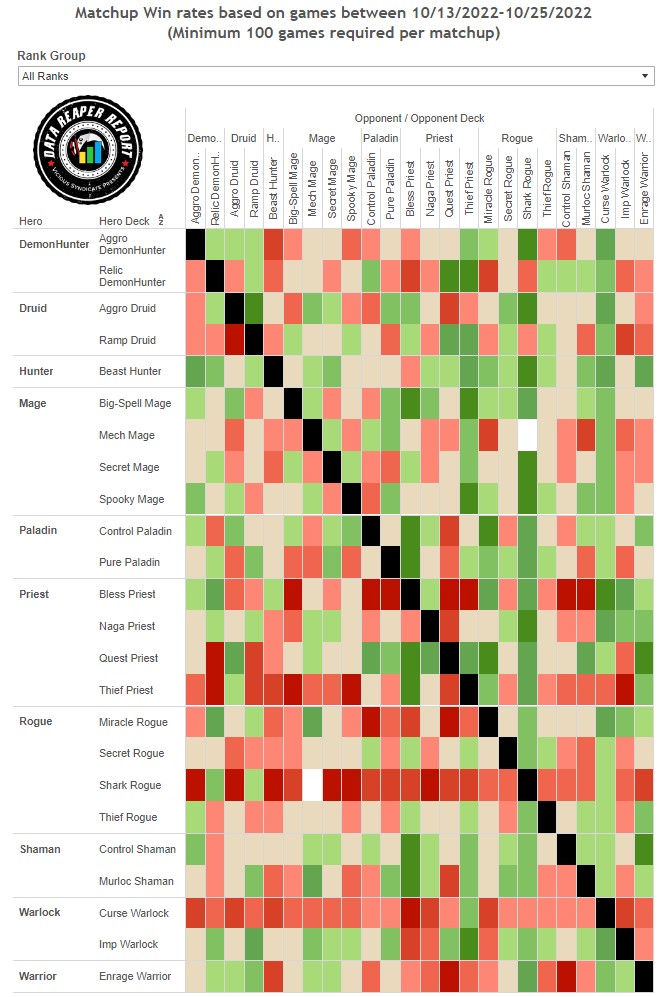 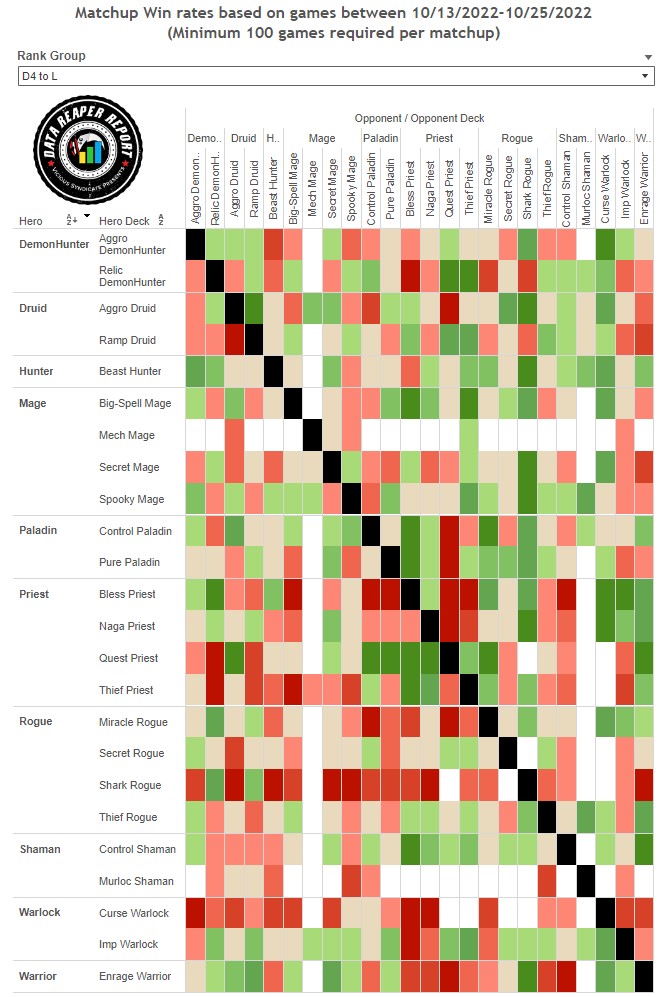 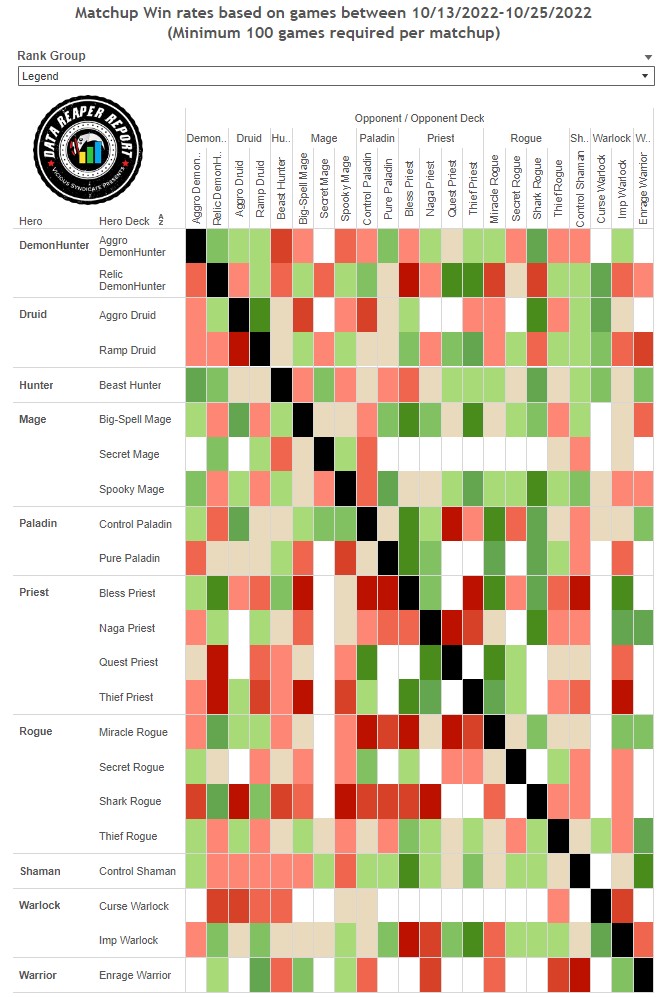 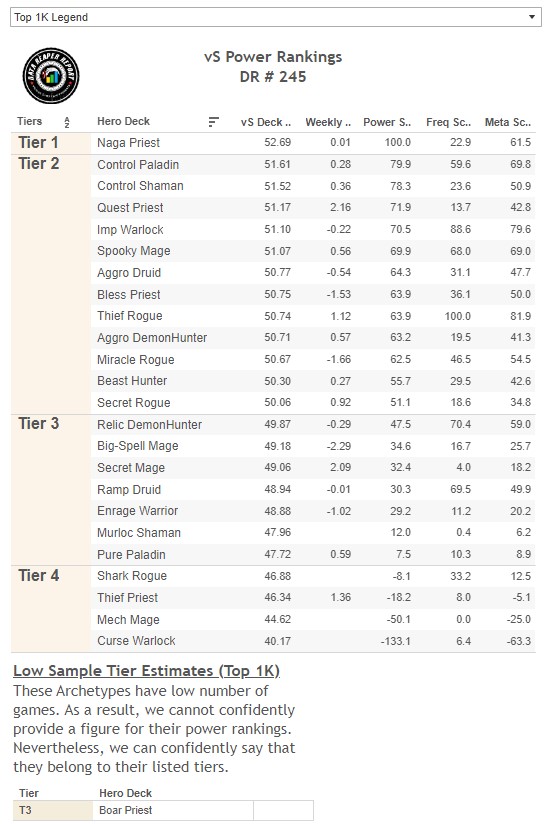 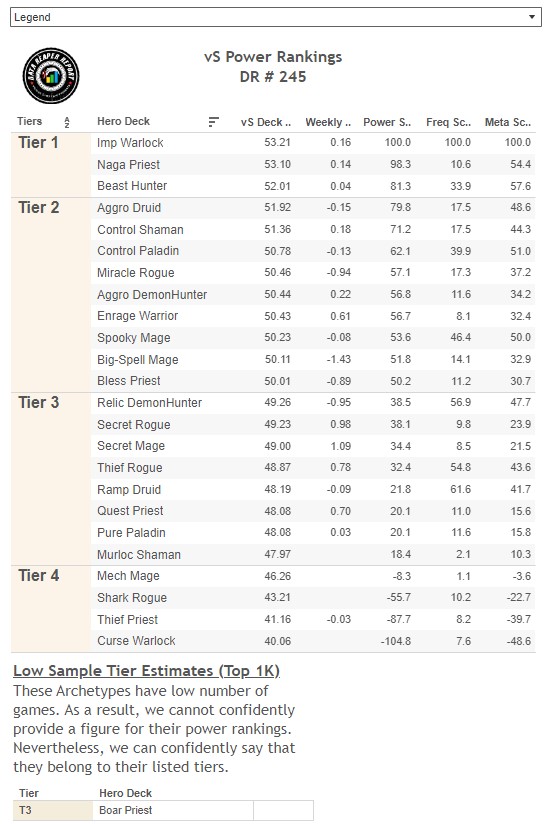 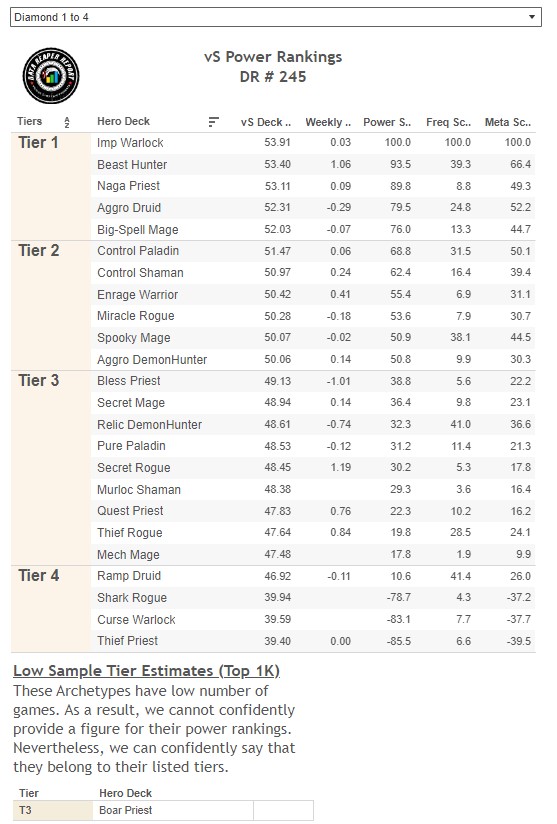 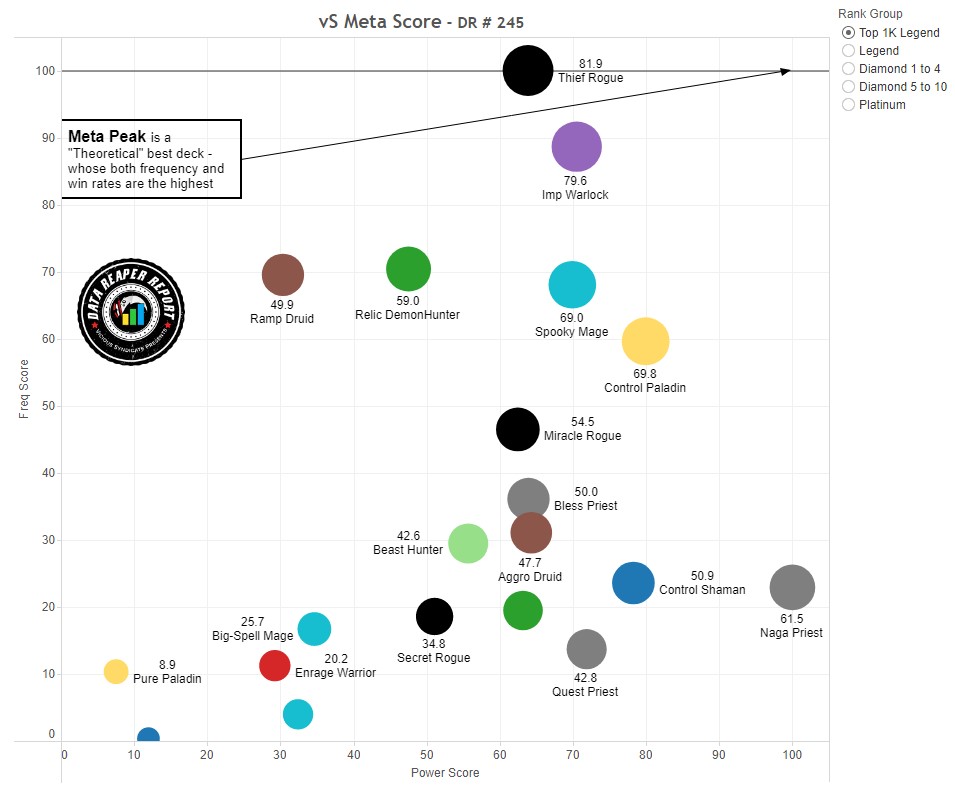 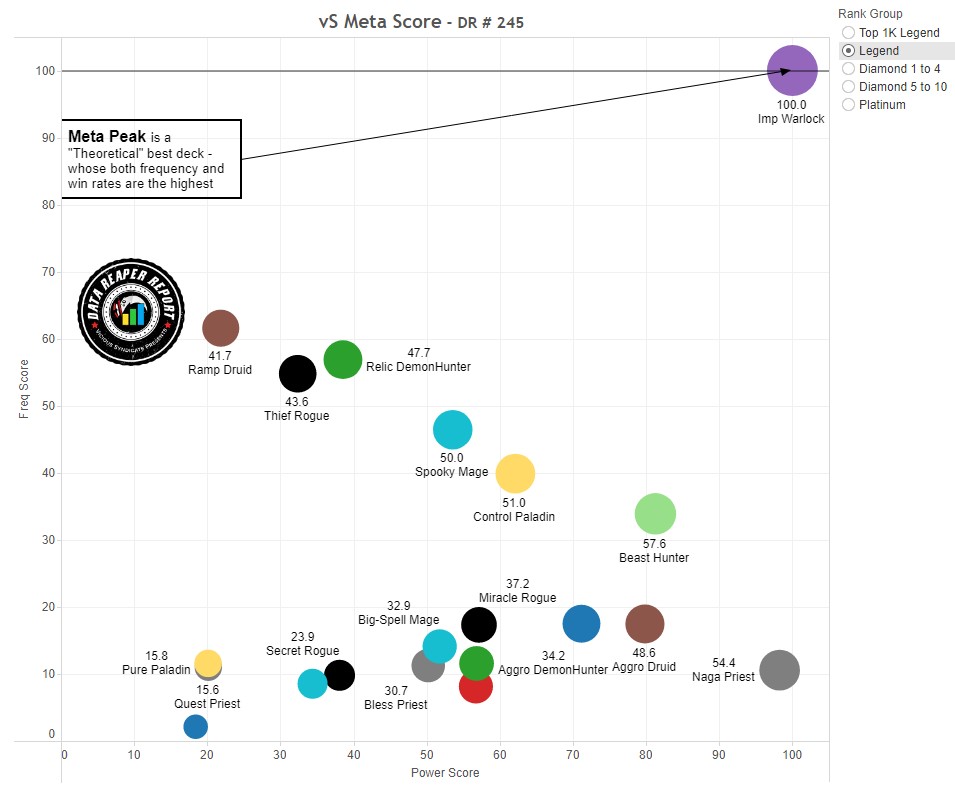 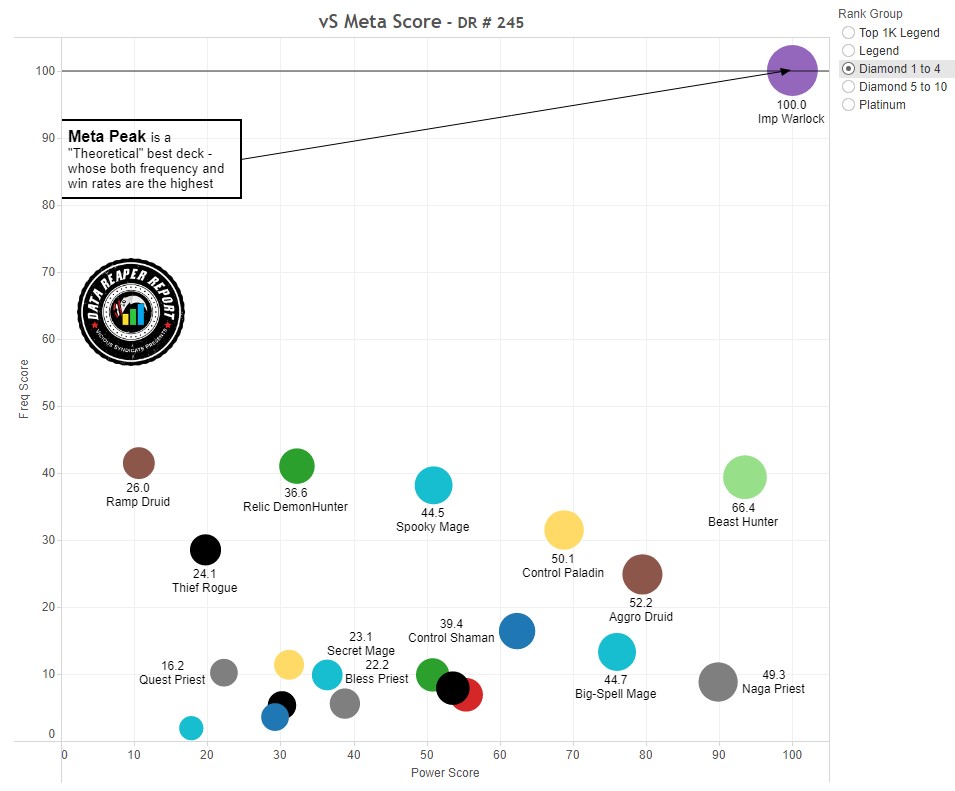 Thief Rogue has seen an improvement in its performance partly thanks to the rise of Sketchy Stranger. Stranger is a solid body in the early game that doesn’t break your Maestra disguise, discounts Gnoll, offers a defensive secret to repeat with Stash and helps activate Gravedigger while keeping a small package of 4 secrets in the deck. It is also a reasonable Shadowstep target. It is the perfect 2-drop for the deck. Gone Fishin’ should be the card to make way.

Last week, Theotar looked like the worst card in the deck. It got a little better this week due to the rise of Control Paladins running Jailer. Thief Rogue does fine in this matchup without it, but if you’re seeing a lot of Paladins, Theotar could slot into the deck ahead of Finley.

Secret Rogue should absolutely run Crabatoa. It is one of the best cards in the deck and makes a huge difference. It might be best to keep 6 secrets and cut Draka, as it is hard to get the most out of her. Sinstone Graveyard never got traction in this deck either.

A new Miracle Rogue variant from J_Alex appears competitive by cutting Gnolls, running both Sprint and Edwin, while including Mailbox Dancer and Frostwolf Warmaster. This build looks to further emphasize the archetype’s card-slinging turns. We’re not seeing indications that it is superior to the Edwin/Maestra build, but it’s close between the two, while Sprint/Maestra is 3rd best.

Shark Rogue does not want to run Auctioneers, as Sprint does a better job as a draw engine in the build that cuts Edwin. This also means we can run Door of Shadows and Blackwater Cutlass over Backstab/Extortion. RobotWizard still swears by Edwin, and it remains the most popular variant, though current indications are that Sprint has some edge. Sprint might be easier to play. Sprint might be better. Sprint might be both easier to play and better. It’s hard to conclusively say.

Bomb Rogue might be a bit of a sleeper deck at top legend. A Reveler build has gained some traction. It is comparable in power to the Burn list.

Resistance is futile. Give up and assimilate.

It lasted a week, but Ramp Druid can’t afford to get greedy in a format that can punish it so effectively. The defensive build is clearly the way to go now.

There’s a recent trend in Spooky Mage to run Shattering Blast and Rustrot Viper over Brann and Finley. The purpose is to target Jailer Control Paladin, Miracle Rogue and Bless Priest. These cards certainly help in these matchups quite dramatically, but we would only run them at top legend, where these opponents are more common.

Denathrius looks quite good in 40-card Big-Spell Mage. It is likely good enough in the 30-card build as well.

There’s no real competitive alternative to the Fel variant of Relic DH. Run it or lose significantly more games. The only decision is filling the last two slots.

Priest decks have been refined and solidified for a long time, and there’s not much development this week either. Naga Priest is arguably the best deck in the game and almost no one cares. Quest Priest is making some waves at top legend due to its ability to hard counter some of the emerging decks.

New Jailer builds of Control Paladin have given us the opportunity to re-evaluate some of the card choices in this archetype. Notable builds coming from Meati and TicTac appear to provide a more solid basis to work with compared to the initial Thijs iteration. Here’s what we found.

Stonehearth Vindicator gets much better when paired with Service Bell. This is a case in which each card is unplayable without the other. Never keep Service Bell in your opening hand, as you want to pull it with Vindicator.

You can afford to run Knight of Anointment with only Equality as a holy spell target. This gives you 4 chances of drawing Equality, not including Vindicator. You’re less likely to draw a Knight after finding both copies of Equality because of Order in the Court and Jailer. It either gets burnt or sits at the bottom of your deck as you approach the late game.

Faelin is a good card to play post-Jailer, but Ragnaros the Lightlord is even better, and you don’t want too many post-Jailer payoffs. The healing from both Ragnaros and Reno makes it less important to run Holy Maki Roll too.

There’s a bit of a debate between Muckborn Servant and Treasure Guard at the 3-mana slot. Servant looks better throughout the game. Better stats to contest the board early while discover is more useful than draw in a Jailer/Order deck once you approach the late game. The difference isn’t massive, but it’s noticeable.

Bunker Sergeant continues to look much better than Wild Pyromancer. We were very tempted to continue to run two copies of the card, but Imp Warlock isn’t as popular where Jailer Paladin excels the most. You could run Viper for the mirror, and to counter Miracle Rogues harder, by cutting another 3-drop (Scorpid/Servant). Spammy Arcanist seems too good to cut.

No changes in the non-Jailer Denathrius build. It is generally better in faster matchups compared to the Jailer build, such as Imp Warlock and Beast Hunter. It is also better against Rogues because Ghastly Gravedigger can really mess up your Jailer plan and you don’t have time to play it against Miracle Rogues. The Jailer build excels in the mirror, and in late-game matchups such as Ramp Druid or Spooky Mage, where you want a more threatening kill plan.

Beast Hunter continues to look good throughout ladder. The balance changes successfully addressed its power level while keeping it very competitive. No changes to our recommended builds, as they look very refined.

Control Shaman might be the 2nd most underrated deck in the format after Naga Priest. It’s a nice answer to Control Paladin too. The format seems to have a lot of options, which might be why decks that are a bit ‘older’ in their development don’t see as much play.

Warrior only appears to be a dead class, but Enrage Warrior is perfectly viable for the ladder climb. The class just needs to be more compelling, as it feels limited in its options.

The meta is looking quite good as we near the 24.6 patch, which has been hyped to impact the format in some way. A new expansion announcement is also likely just around the corner, so it’s an exciting time for Hearthstone.

We’ll tell you to play Naga Priest another week, and highlight that Quest Priest is beginning to grief quite effectively at top legend.