Welcome to the 247th edition of the Data Reaper Report! 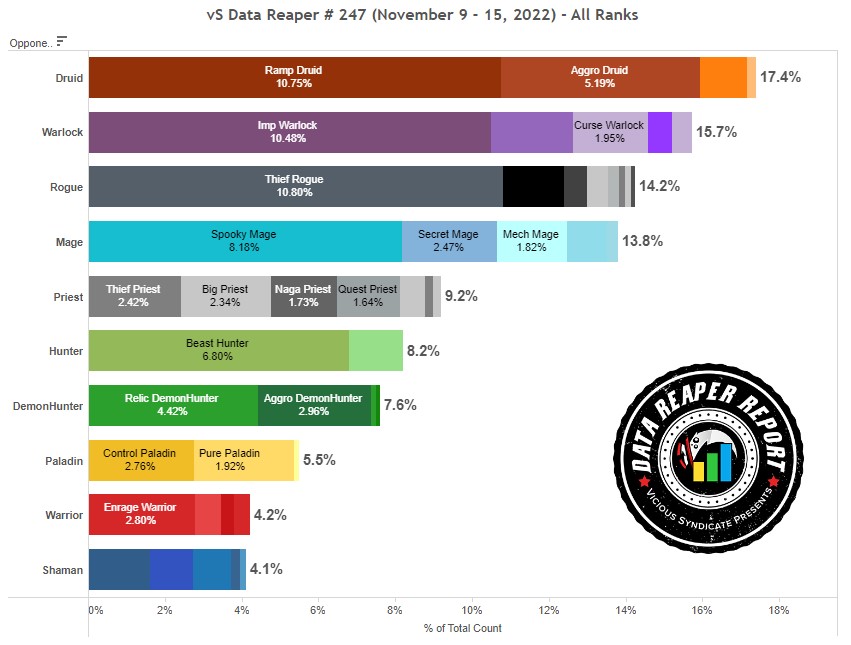 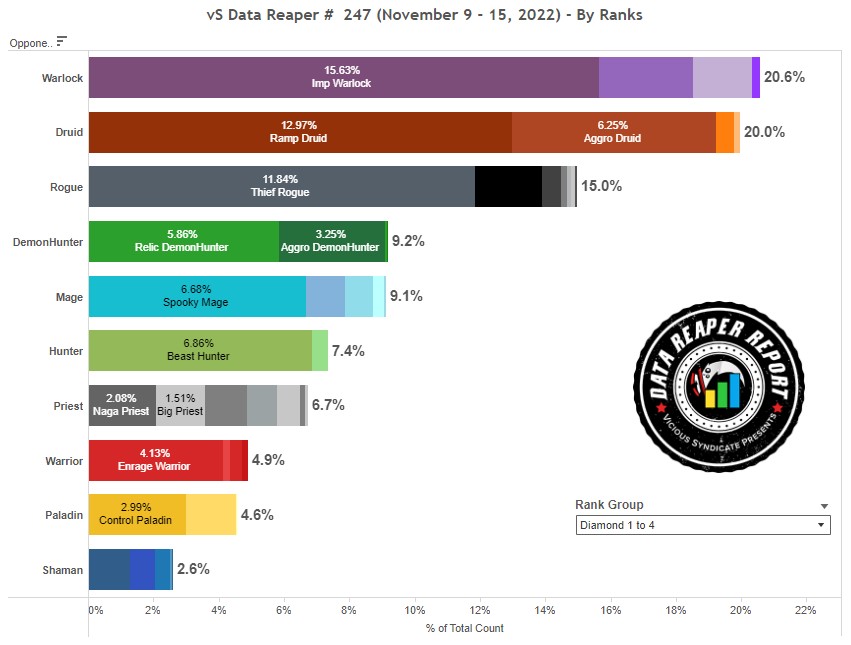 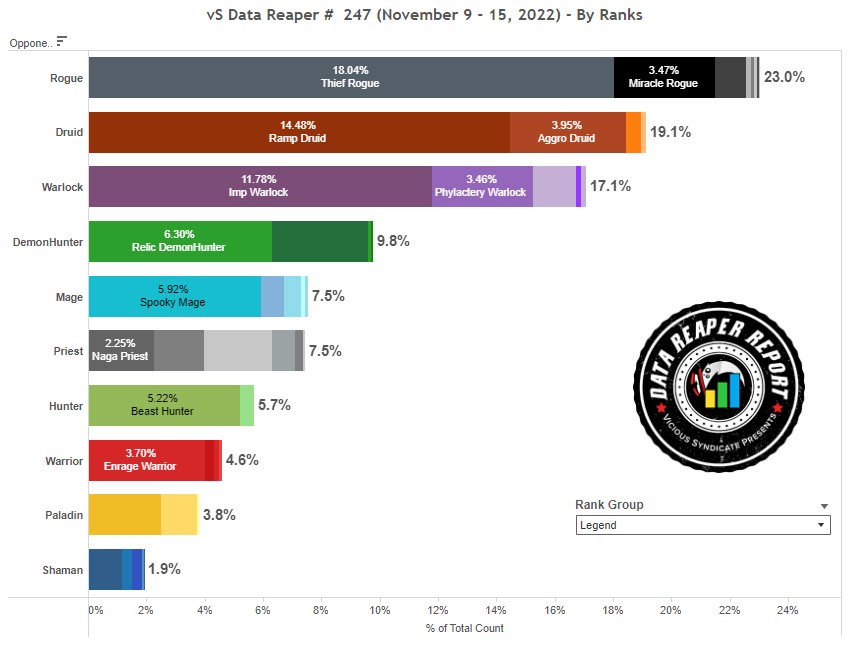 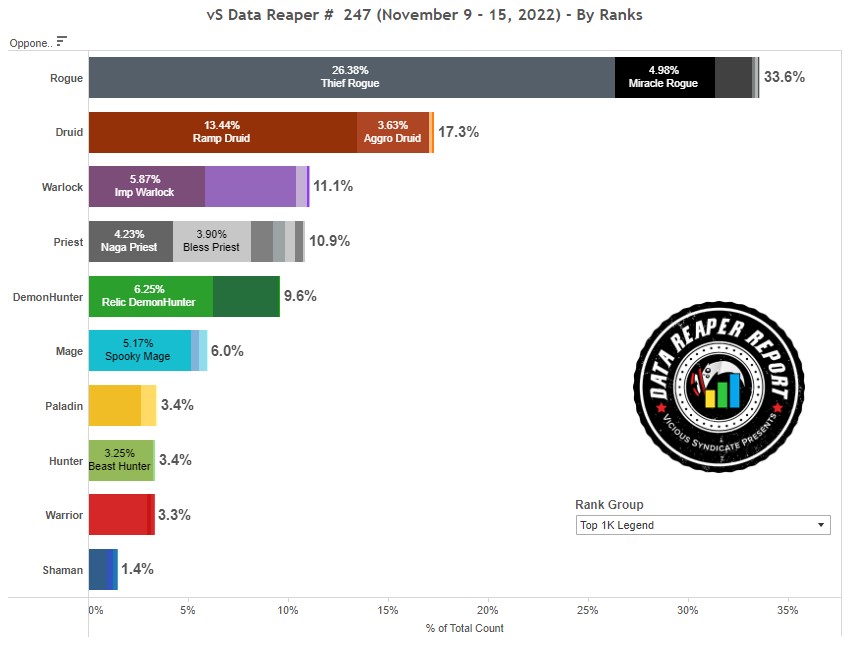 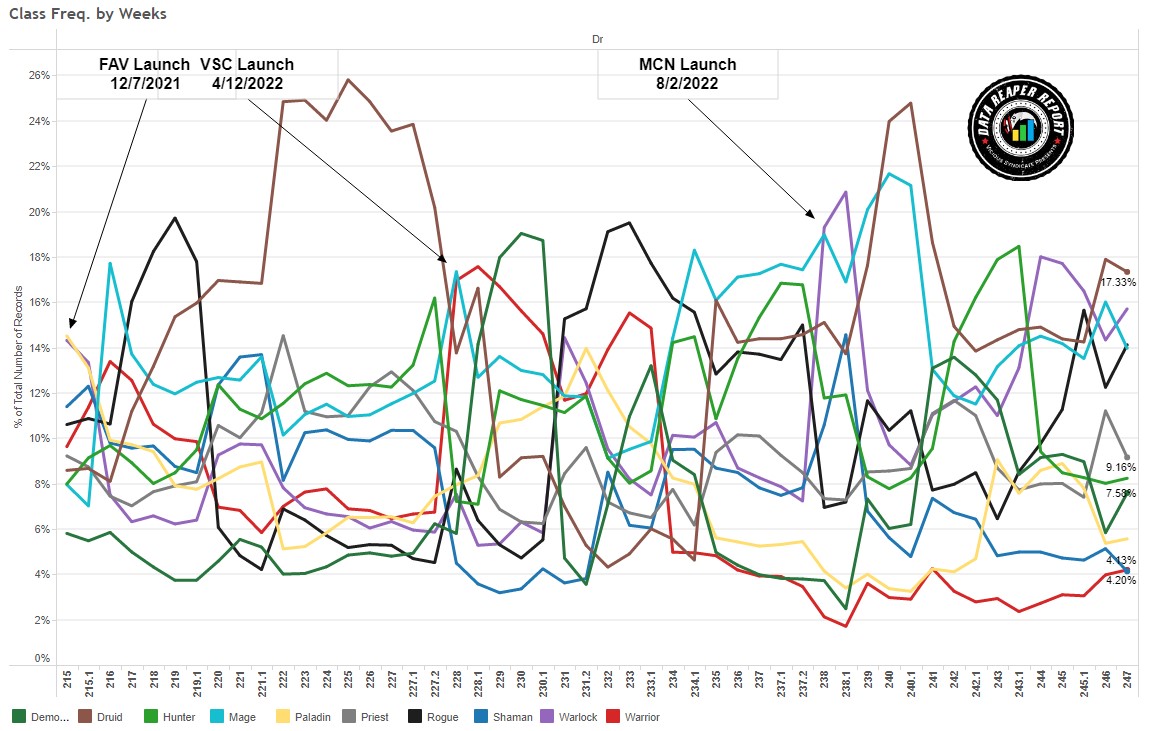 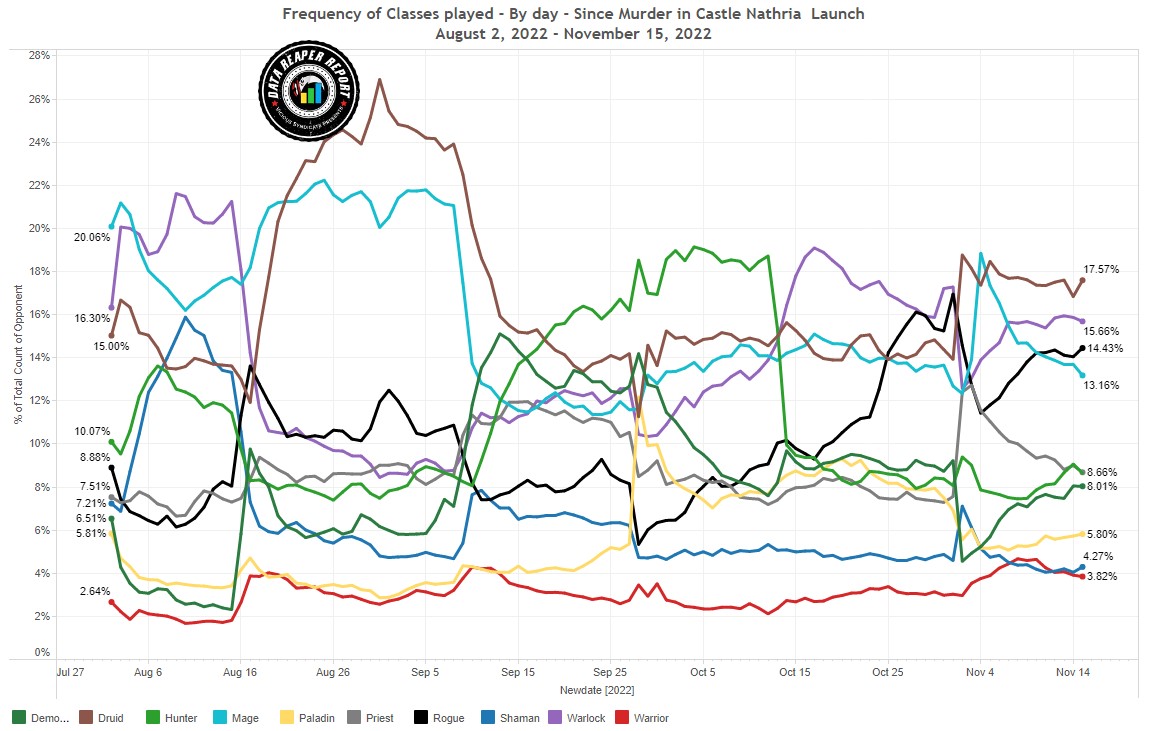 Thief Rogue has eclipsed a 25% play rate at top legend, and Rogue is almost at 35%. The deck is nowhere near as popular at other rank brackets. Why do high level players love it so much? We’ll think about the factors contributing to this phenomenon later.

Ramp Druid is popular throughout ladder at similar play rates ranging between 10%-15%. Aggro Druid is most noticeable at Diamond ranks, but never comes close to Ramp Druid.

Imp Warlock is players’ most common obstacle on their climb to legend. The deck has proven to be extremely powerful at all but the highest levels of play, where it’s moderately successful and therefore less popular. This is where Phylactery Warlock becomes more visible and approaches Imp Warlock’s play rate.

Naga and Bless Priest, the two most successful decks at top legend last week, cannot manage a play rate higher than 4%. You barely see them at Diamond 5 and below, where you’re more like to encounter the floundering Big Priest, or Thief/Quest Priests.

Mage is almost exclusively Spooky, with 30-card builds taking over. Big-Spell Mage and Secret Mage are small blips on the radar.

Beast Hunter is moderately popular. Enrage Warrior and Control Paladin are smaller components of the format. Players are uninterested in Control Shaman and the class is close to disappearing. 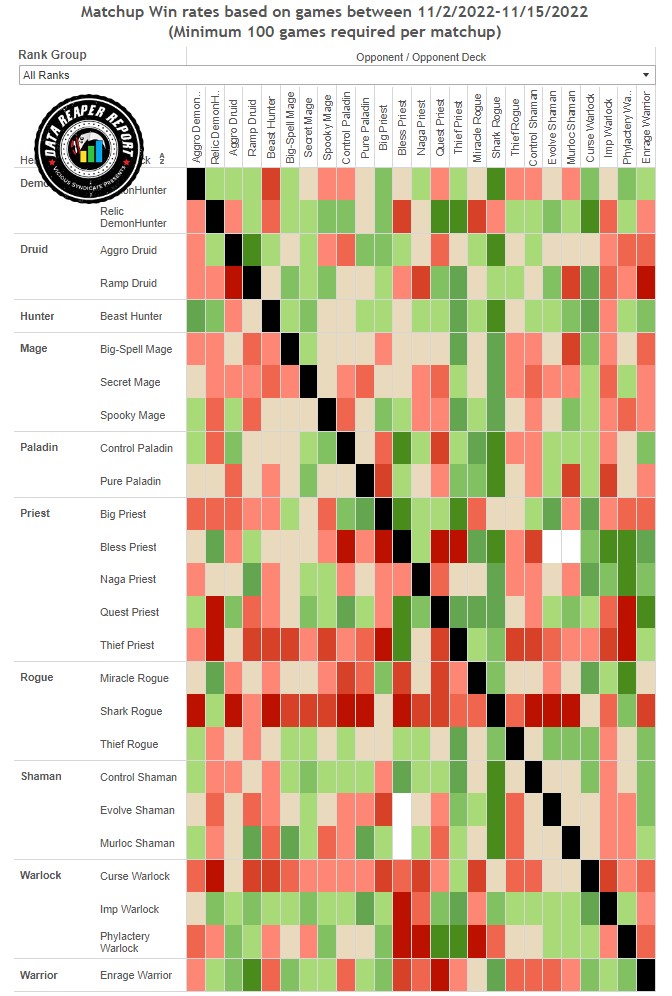 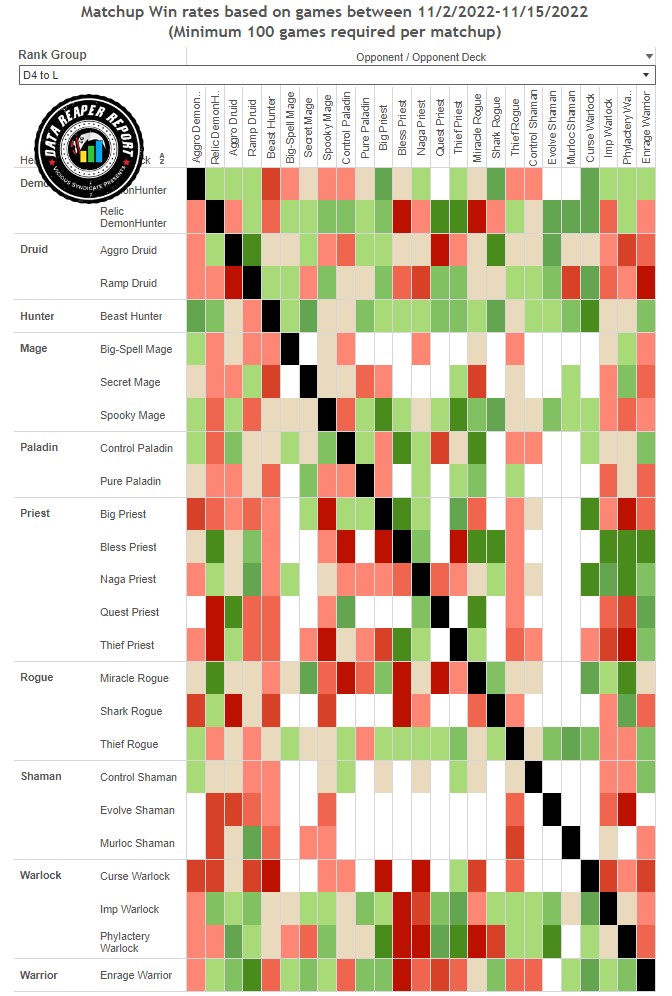 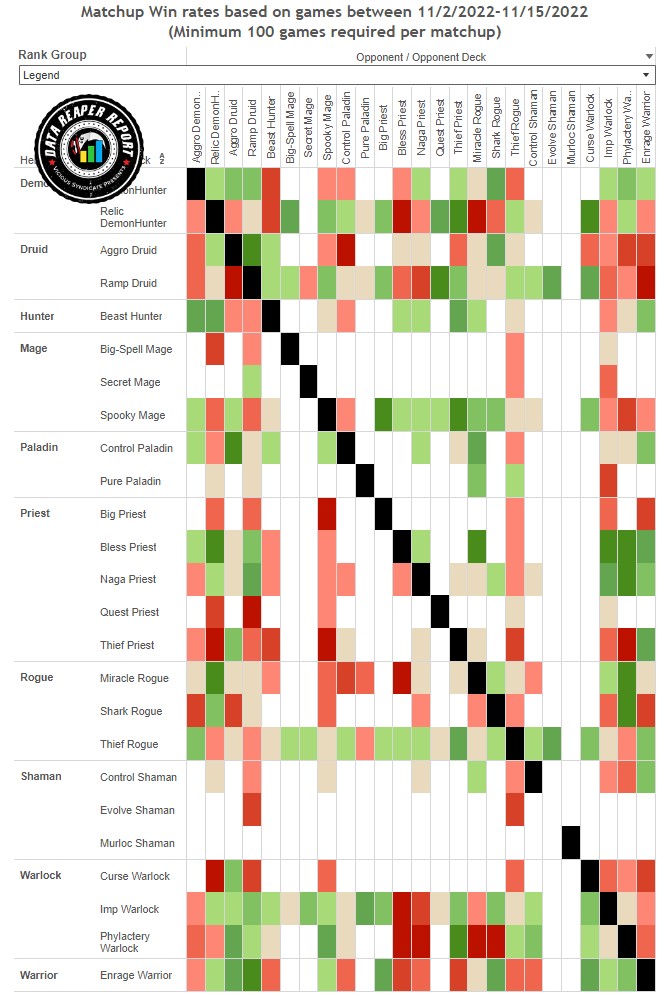 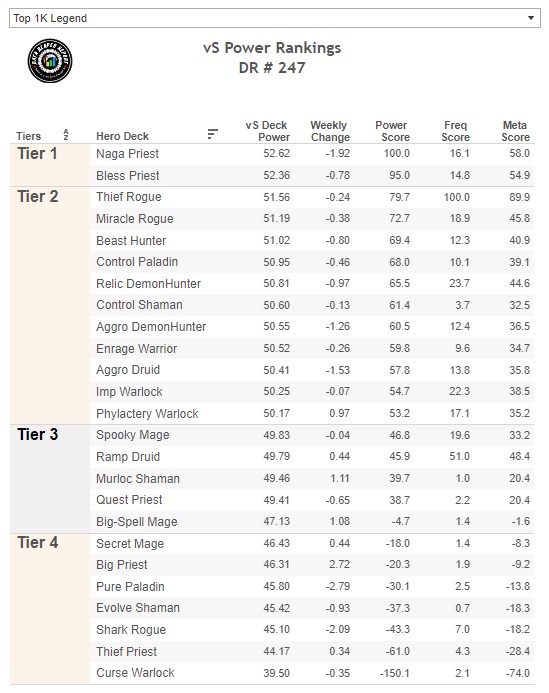 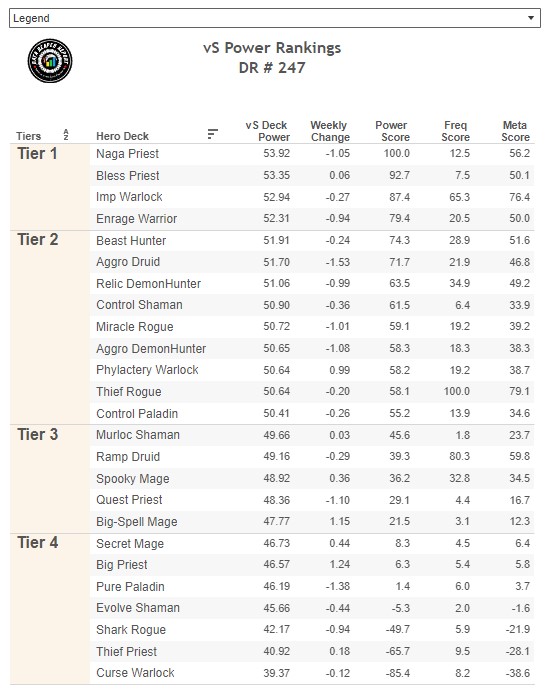 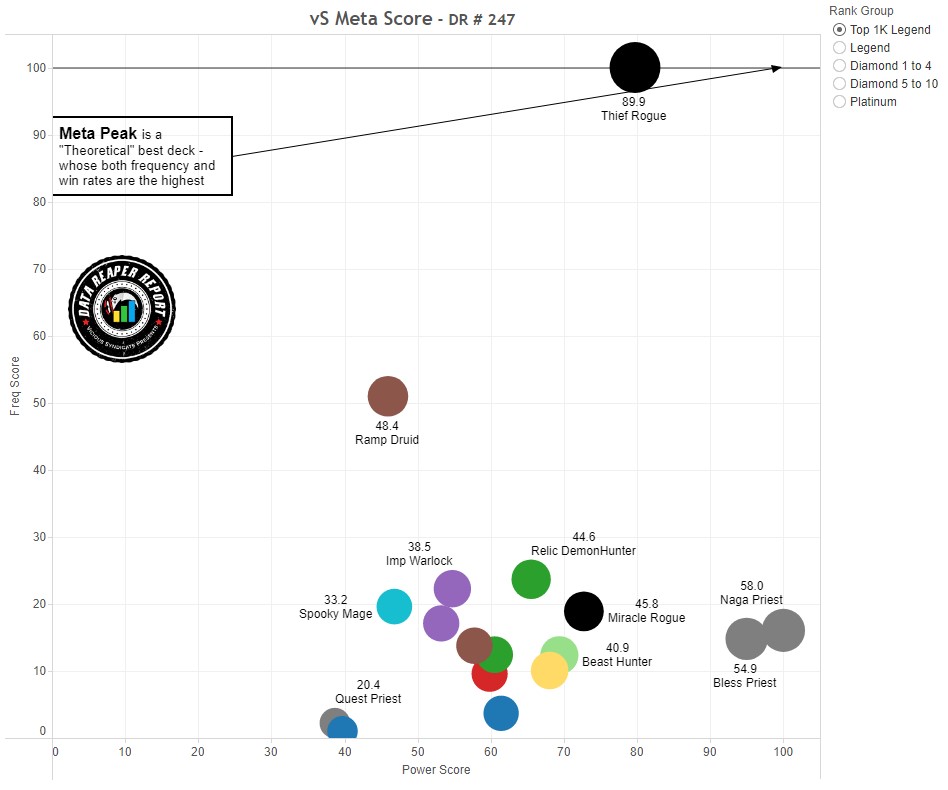 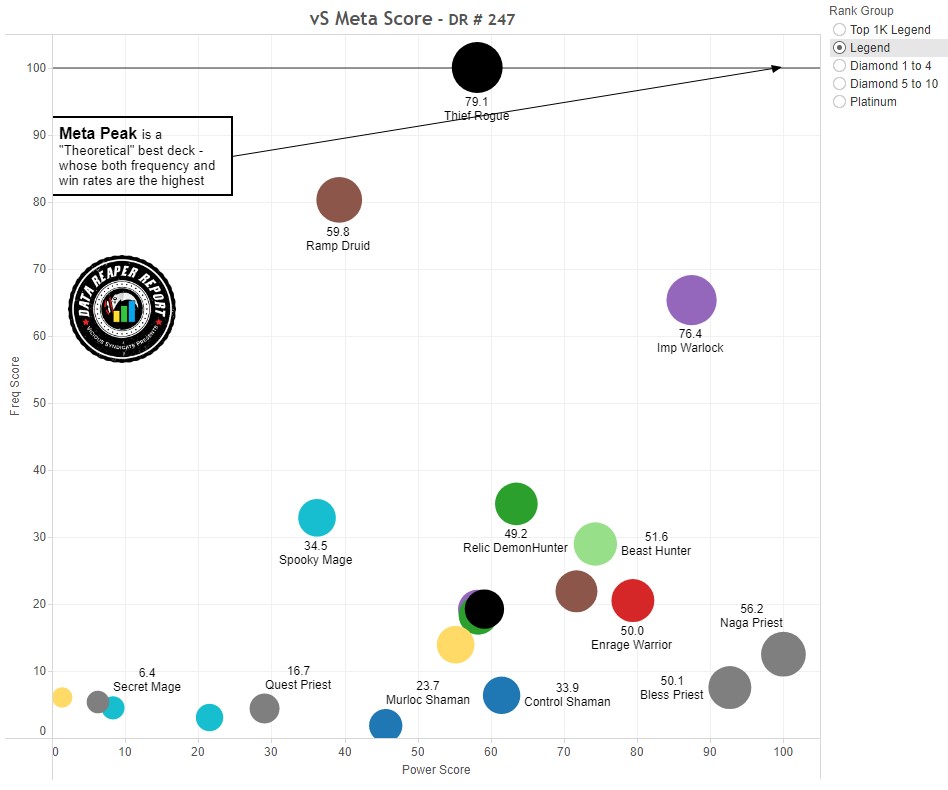 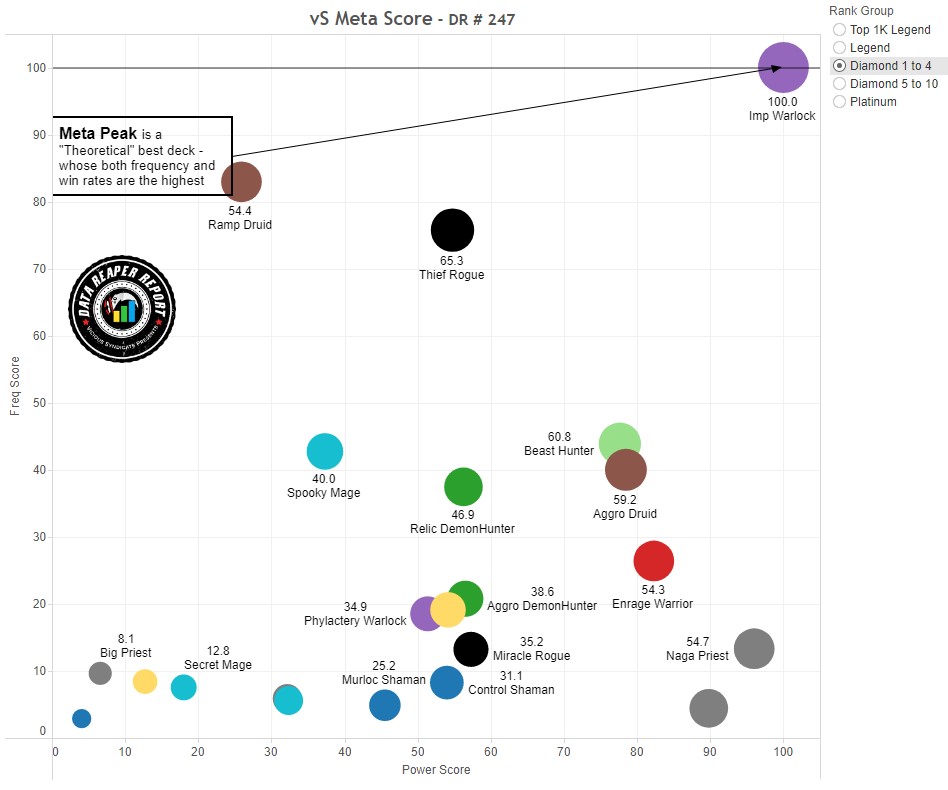 Generally, there are no big changes in the power level of decks compared to last week. We’re mostly seeing an overall decline in win rates as bad decks are disappearing and good decks are queueing into each other more often, making the format harder.

Imp Warlock dominates ladder up to legend. Bless and Naga Priest take over and become the sole Tier 1 performers at top legend. This was the case last week, but Thief Rogue is the deck that has caught the hearts of many. There are a few reasons for why Bless/Naga turns players off:

Meanwhile, Thief Rogue ticks a lot of boxes for a popular deck:

Having said that, we only see this phenomenon at top legend. Most of ladder is very diverse, and all of ladder is highly competitive, with every class having at least one good deck at any rank bracket. Shaman, Paladin, and Warrior might feel a little neglected, but they’re doing more than fine.

It’s a pretty good time to play Hearthstone, and the excitement over the next expansion means there’s a lot to look forward to.

There’s not much to say in terms of class developments. It seems that we figured out the strongest decklists last week. Ramp Druid’s vanilla variant has gotten better and more competitive with the Celestial variant, so we added it as an alternative in the Ramp Druid section.

Tomorrow, we will publish a recap article about the next two card packages that are being revealed on November 18th. It will come out at 1pm Pacific Time, or 10pm Central European Time. You don’t want to miss it. One of these cards is CRAZY! Promise.