Welcome to the 251st edition of the Data Reaper Report! 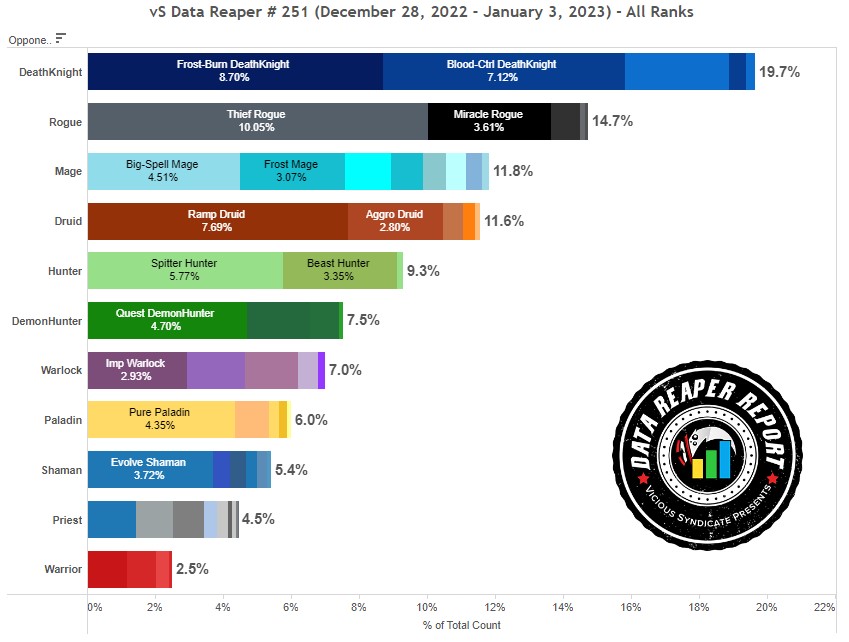 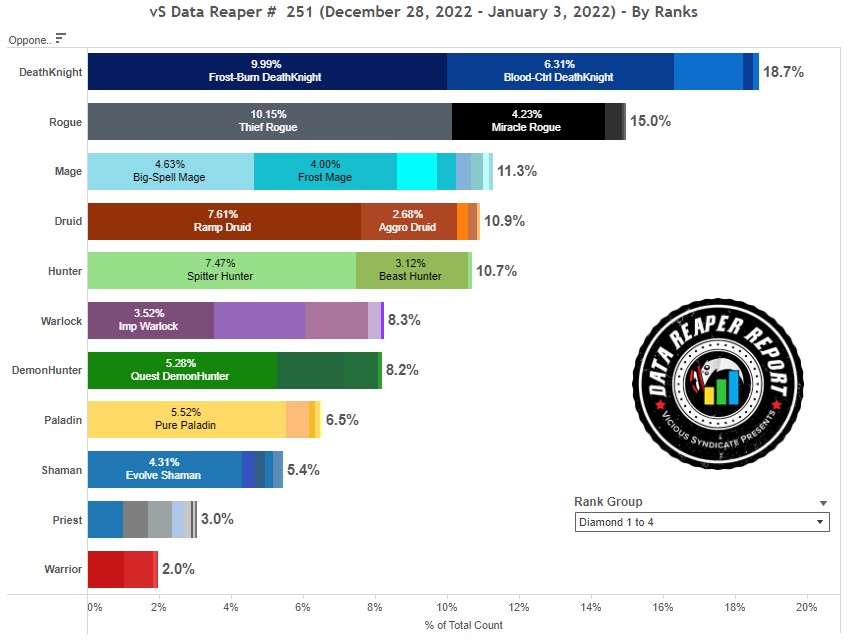 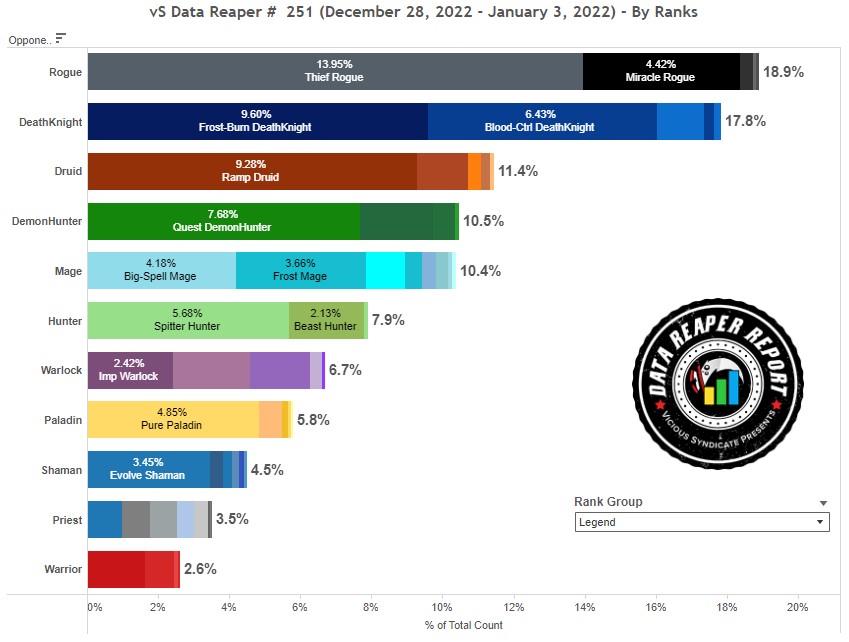 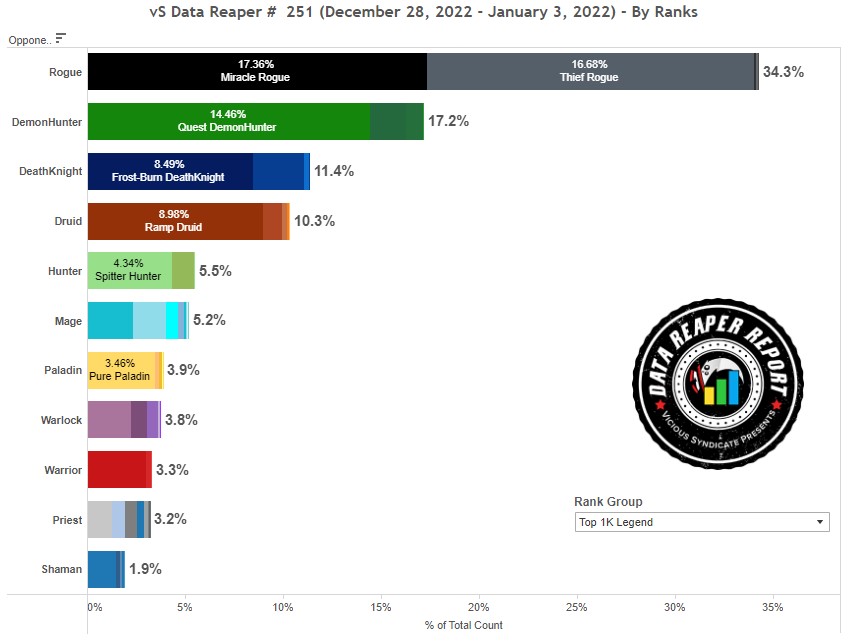 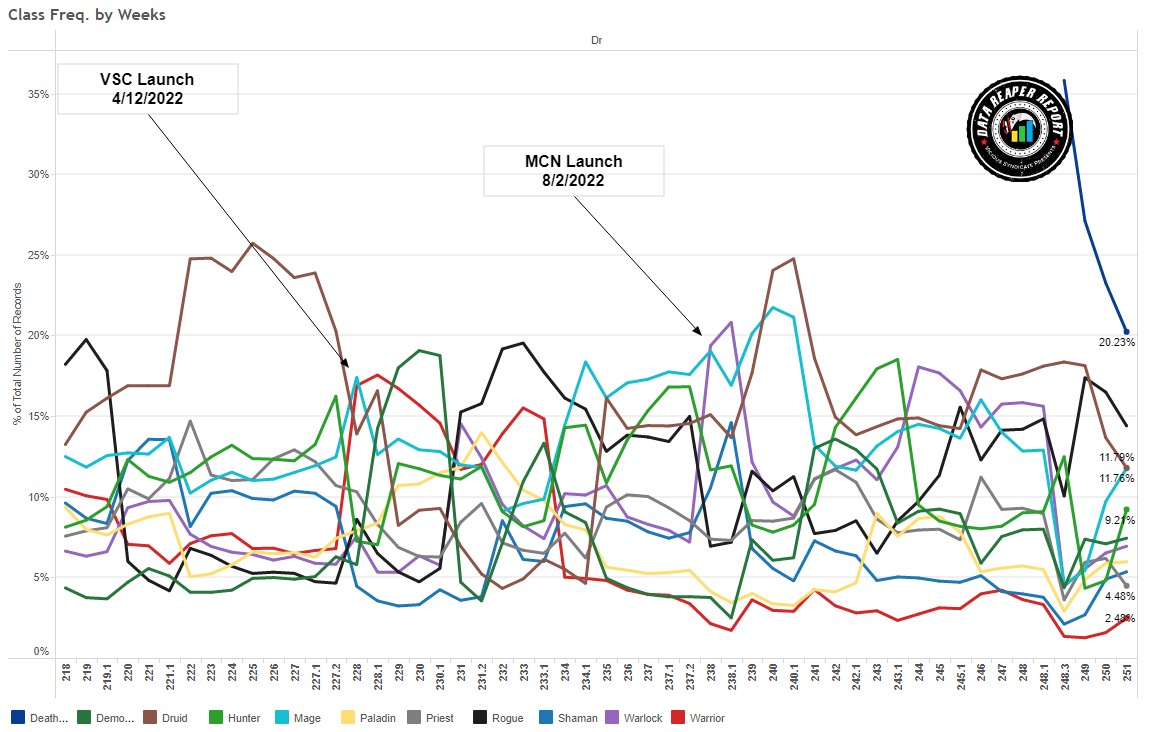 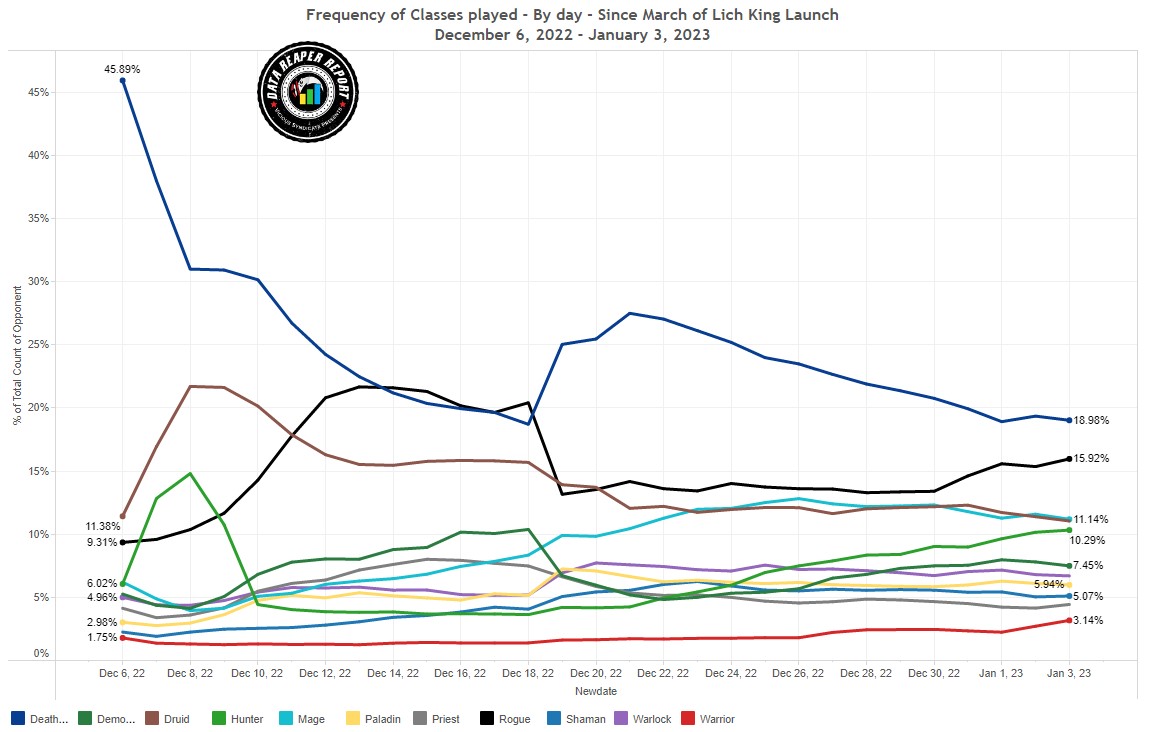 We’re seeing two very different metas. The one throughout most of ladder is quite diverse. No deck outside of legend exhibits a play rate of over 10%. No class exceeds a 20% play rate. In contrast, the meta at top legend is incredibly narrow, with just a few classes seeing significant play as the others have died out.

Rogue is at the center of the top legend meta, with Miracle Rogue spiking in play and surpassing Thief Rogue’s popularity. Rogue approaches a 35% play rate at this rank bracket. Nothing else comes close.

Demon Hunter is the other popular class here, with Quest DH taking over and Sinful Brand builds becoming the consensus choice. The deck is far less common outside of legend ranks.

Death Knight remains the most popular class outside of legend. Frost-Burn is the common choice, but Blood-Ctrl isn’t too far behind. Unholy-Aggro has fallen off.

Ramp Druid numbers are very stable throughout ladder. The deck has been consistently attractive to different kinds of players over the last year. There is a mix of Renathal and non-Renathal builds, with the latter taking up a greater presence compared to last week. Aggro Druid is in decline.

Spitter Hunter is rising in play, doubling its numbers at some rank brackets compared to last week. Not very common at top legend because of the Miracle Rogue/Quest DH duo. Beast Hunter is noticeable but has a smaller presence.

There is a lot of experimentation in Mage, but Big-Spell and Aggro Frost Mage are the primary choices.

Pure Paladin is the only serious player in its class following the fall of Renathal.

Enthusiasm for Phylactery Warlock has fallen off at top legend due to the crippling matchups against Miracle Rogue and Quest DH. Outside of legend, Imps are what you mostly see.

Control Warrior is creeping up, driven by top legend publicity. Some players claim it is the meta breaker capable of countering Miracle Rogue and Quest DH. We’re sensing strong Copium vibes, but we’ll look into what’s happening here later in the report.

Evolve Shaman has proven to be one of the strongest decks on the climb to legend, yet the deck is declining. This is pretty uncommon and signals an absence of interest in the class. Some classes get hyped the moment they start looking good (Druid, Priest, Rogue), while others struggle to hold the attention of the player base for long (Hunter, Paladin, Shaman).

Priest is stagnating, settling into its historical role of the format’s biggest joke. There’s some experimentation here involving very bad decks, like Svalna and Undead Priest. 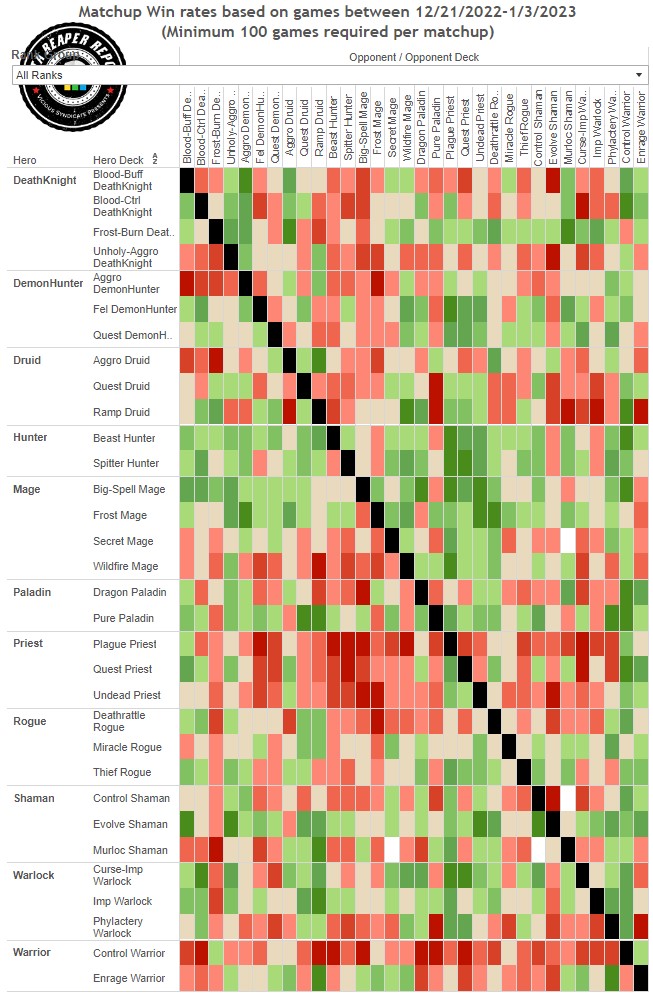 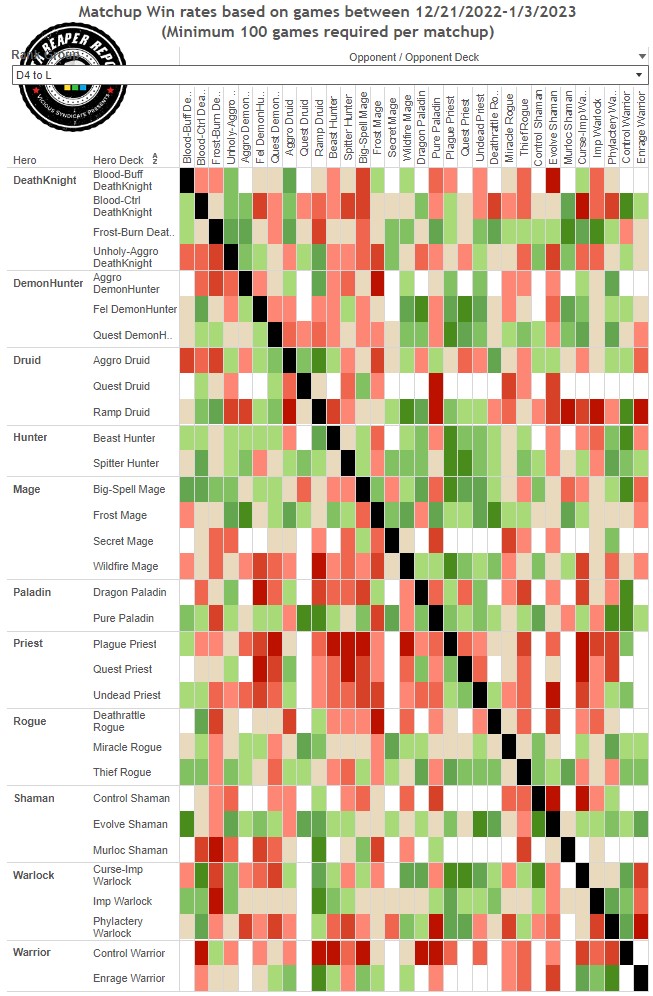 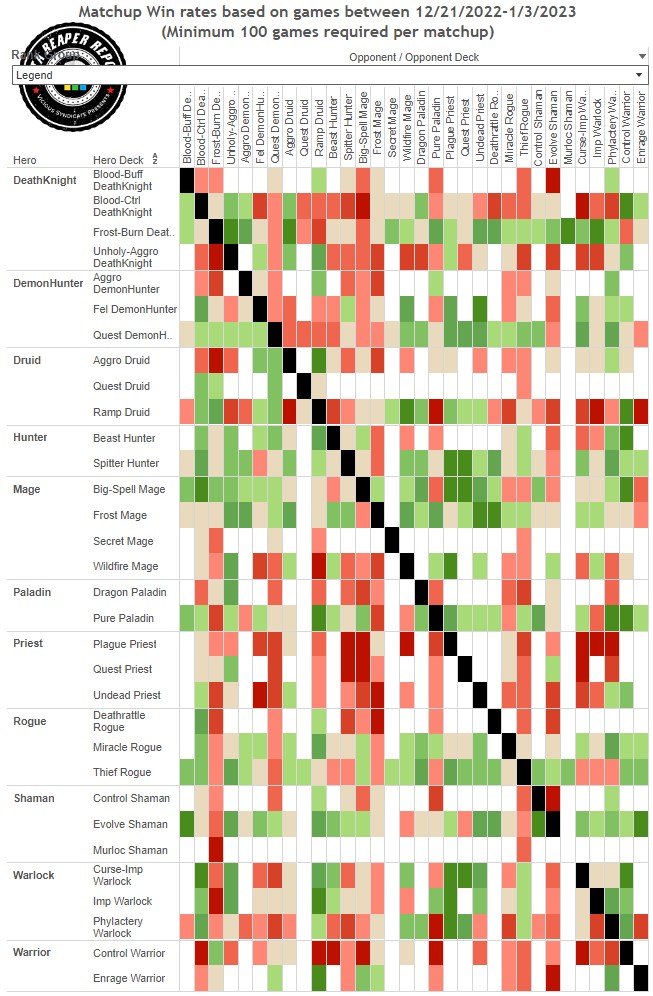 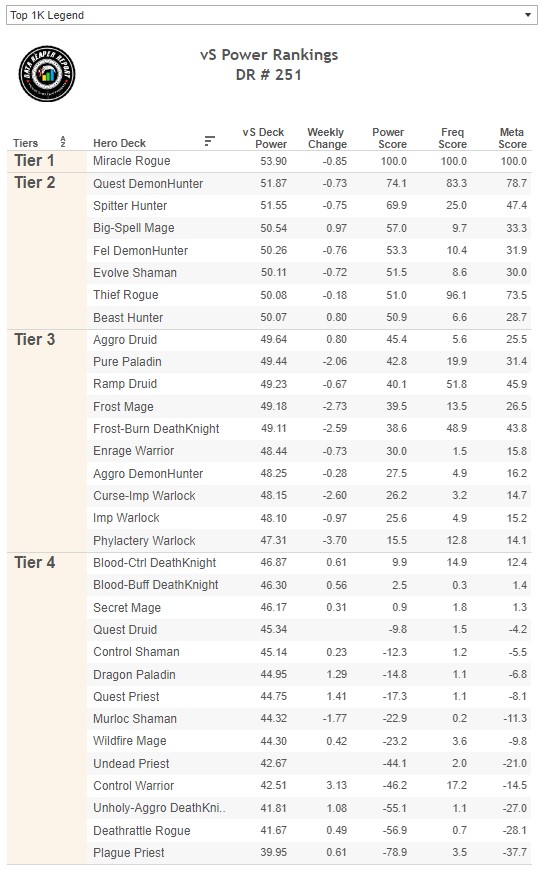 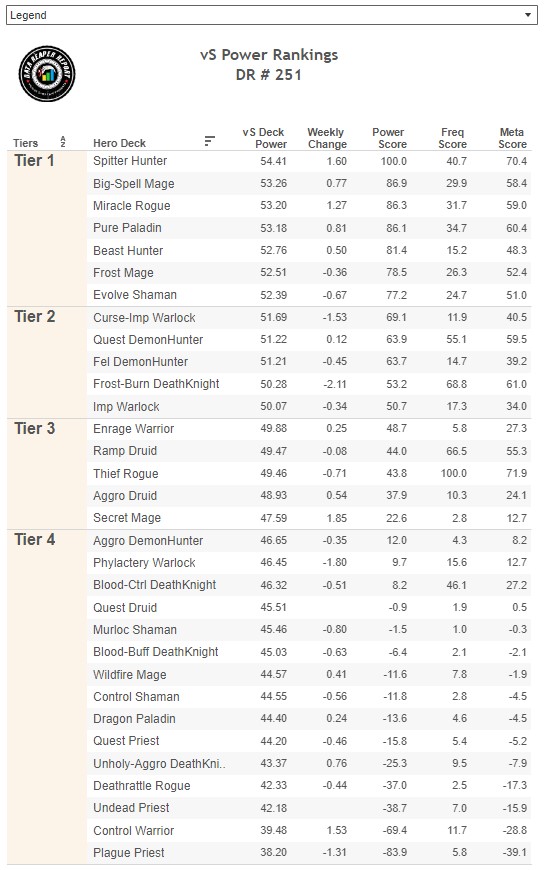 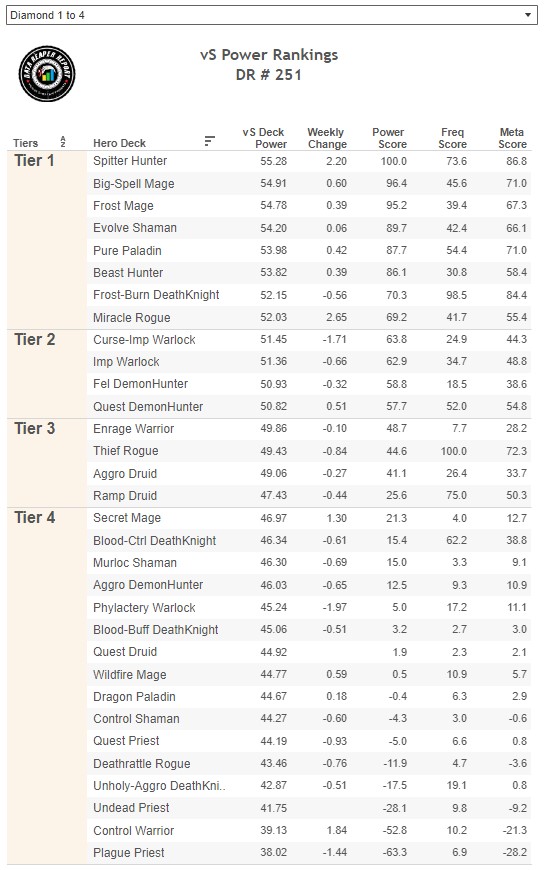 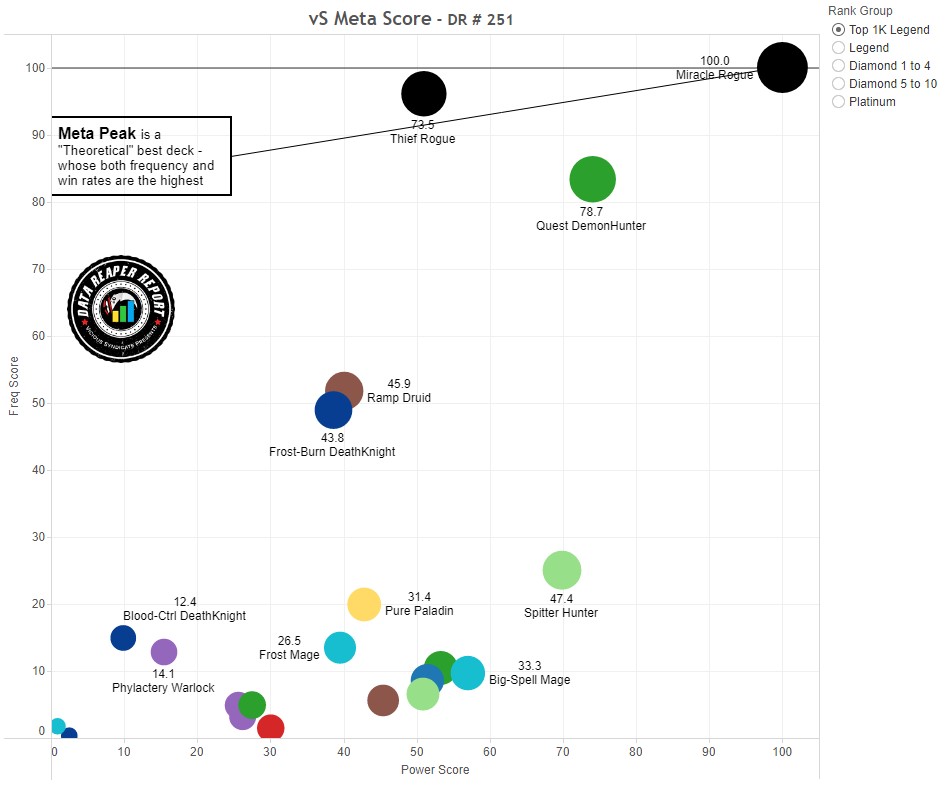 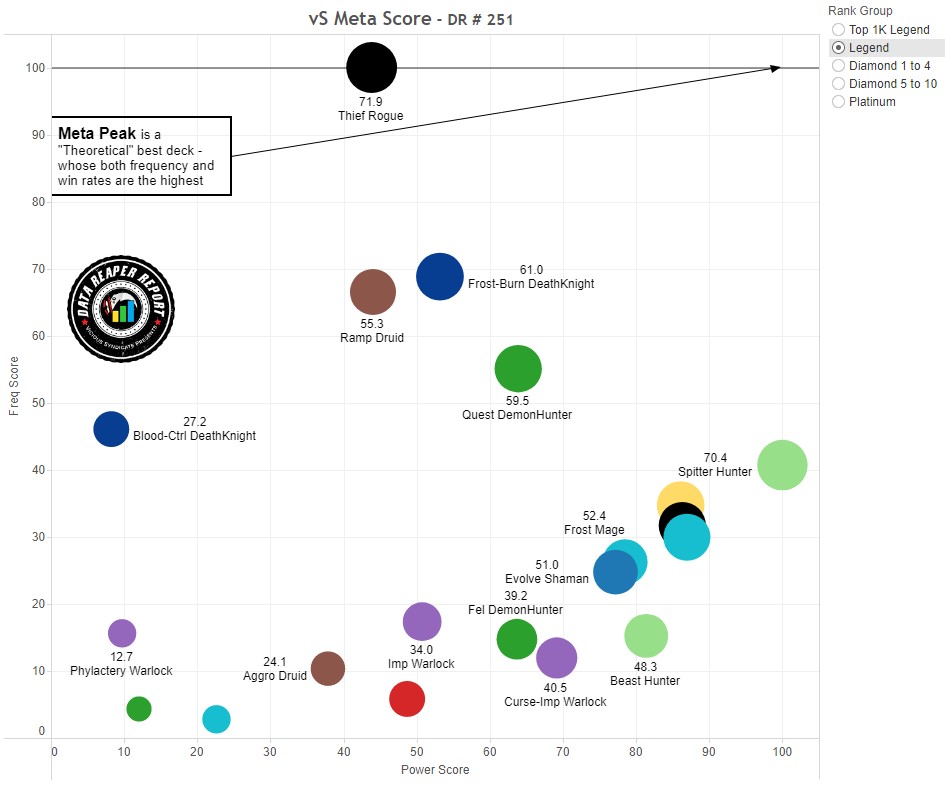 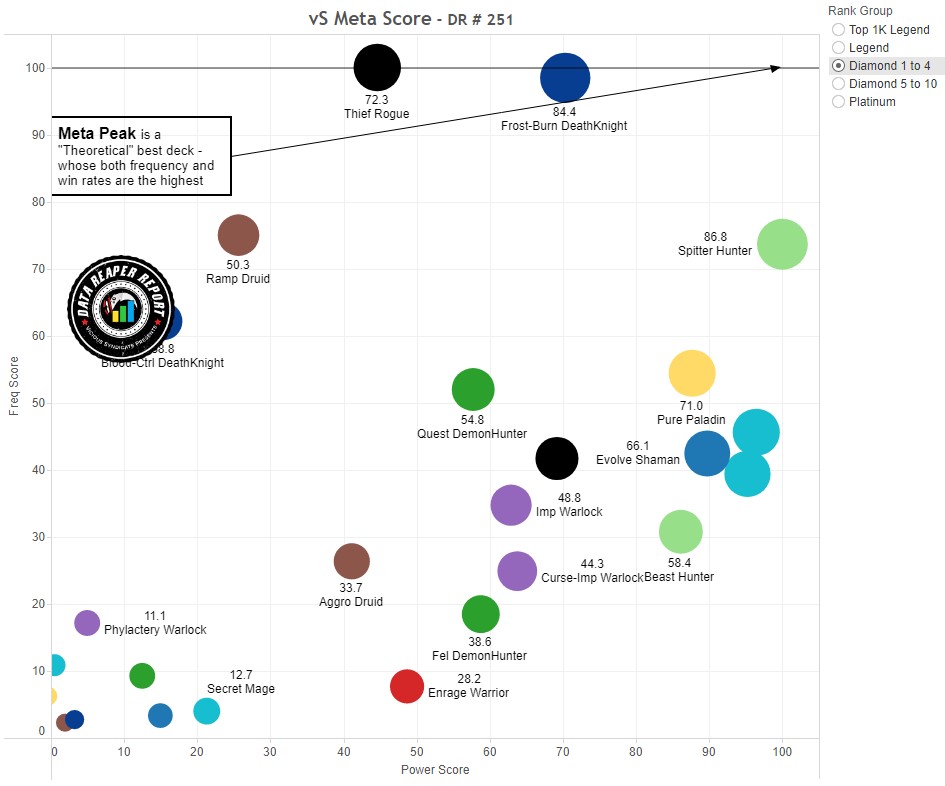 Miracle Rogue looks completely busted and uncontested at higher levels of play. Yet, it can still make some final tweaks to further twist the knife into the format.

Sparked by Casie’s build, we’ve seen new data coming from iterations cutting burn (Stab, Tooth) and adding Gone Fishin’ and Door of Shadows, alongside Scribbling Stenographers. This approach improves the deck’s longevity and Sinstone Graveyard’s performance since you’re less likely to run out of gas. Though cutting burn seems to hurt the Demon Hunter matchup in theory, some of that percentage loss is made up by the stronger Ghosts we’re able to develop with this build. What’s more is that the Rogue matchups, both the direct mirror and Thief Rogue, improve.

We can’t agree on cutting Crabatoa. We believe this sentiment is driven by the card’s lackluster performance against Demon Hunter, because Crabatoa is amazing against other Rogues and superb in most other matchups on ladder. Demon Hunter’s popularity doesn’t come close to Rogue’s at any level of play, so cutting Crabatoa results in a net loss of overall win rate. We’ve consistently measured the card to be a net benefit to the deck at all levels of play, including top legend.

The card that doesn’t perform well enough at any level of play is Serrated Bone Spike. Not only is it useless against Demon Hunter (worse than Crabatoa), but it also doesn’t deliver good results in Rogue mirrors since you don’t have a lot of opportunities to use it optimally. Cutting Serrated Bone Spike means you can fit two copies of Door of Shadows, Gone Fishing’ and Scribbling Stenographers, without giving up Crabatoa. This is looking like the perfect 30.

No changes in Thief Rogue. Serrated Bone Spike is a lot better in this deck because of the synergy with Queen Azshara.

Quest Demon Hunter is becoming more and more degenerate by the day, driven by the huge advantage it gets in the mirror if it cuts expensive cards to find early blowout opportunities and OTK’s. Though this approach isn’t inherently beneficial in the Rogue matchup, the Demon Hunter can reach a point of degeneracy in which it can kill the Rogue before the game has even properly started. Here’s how you maximize the mirror without hurting the Rogue matchup, something the deck currently struggles to juggle.

Both Kurtus and Jace are too slow. Jace is replaced by Abusive Sergeant to combo with S’theno for early burst/OTK turns. Predation and Dispose of Evidence are added since we’re all in on S’theno. Dispose of Evidence really pushes the boundaries on how quickly the Demon Hunter can find lethal. We drop Coordinated Strike and one Feast of Souls since they’re not very useful in the mirror matchup.

Aldrachi Warblades is huge in the mirror, so it is kept. We need to cut one more card from the deck, so the choice is one Fel Barrage. It isn’t as good once we cut Jace and it’s a damage resource that’s a bit ‘too slow’ for this build, as hilarious as that sounds.

Turns out that this exact list ended up being piloted to #1 legend by Gladio while we were figuring it out independently. Note that this build is geared for top legend, where Quest Demon Hunter is most powerful. If you don’t play at this rank bracket, you might as well go questless and run a normal Fel Demon Hunter, which performs better throughout most of ladder. The build is solved and clean.

Frost Death Knight’s build looks as good as it gets. The only possible change is to cut Vizier for Trogg, which provides you with an additional 1-drop that’s pretty good against both Rogue and Demon Hunter.

Blood Death Knight should be running Asphyxiate to deal with Miracle Rogue, so we made that adjustment in the 30 build, dropping Theotar (too slow to realistically disrupt Rogue/Demon Hunter) and Okani.

Ramp Druid should be cutting Renathal. We dropped Planted Evidence for Crypt Keeper for better defense against aggressive decks. Planted Evidence isn’t that great once you stop running Topior.

Both Hunter builds look perfect. Spitter Hunter looks like the best deck to climb to legend with. Kodobane and Ara’lon are unnecessary.

Frost Mage settled on its cleanest list. School Teachers could replace Sivara and Thalnos, but we’re not convinced it’s better.

Blood Crusader provides very little benefit to Pure Paladin in the current format, so we’re happy to leave it out another week. The featured build looks fine, if you understand that keeping Mooncatcher in your opening hand is almost always a terrible idea.

The rise of Rogues has made us reconsider cutting Goldshire Gnoll from Phylactery Warlock. The card is an active liability against Demon Hunter but can answer Wildpaw Gnolls very cleanly. There are more Rogues than Demon Hunters, so it makes sense to leave it in.

There have been many attempts to refine Control Warrior, but the archetype is generally unplayable due to its inability to perform in a wider field. In a very narrow top legend environment where you only meet two decks (Miracle Rogue and Quest DH), we do think the featured build can perform. Reqvam first floated the iteration, and it was slightly tweaked by McBanterFace. Don’t bother with Steamcleaner or Demolition Renovator. Far Watch Post is the ultimate ‘tech card’ against Rogue and Demon Hunter. This list seems to soundly beat Demon Hunter, while nearing a close matchup with Miracle Rogue. Possibly.

There is nothing going on in Priest. Some players are trying out Svalna Priest, but the deck looks terrible. Any sort of Control Priest deck, or an Undead Priest deck, doesn’t look competitive. Bless Priest is ‘okay’ at top legend, but still inferior to Demon Hunter and Rogue. Concoctions have made the Miracle Rogue matchup far more difficult than it used to be.

Evolve Shaman is a very good deck. The featured build looks perfect. The player who came up with Vol’jin/Neptulon was Jambre. Of course. We should have known. Good job, Jambre.

Two tyrants are developing in the format. Spitter Hunter has become the premier deck in the format following its refinement. Miracle Rogue is broken at historical levels once you approach top legend. Both of these decks are underplayed relative to their power, and you’re going to see even more of them over the next week. Hunter can be reliably answered by Frost Mage, if you’re looking to stay a step ahead of developments. Miracle Rogue can be reliably answered by nothing. Good luck with that.