Welcome to the 252nd edition of the Data Reaper Report!

A Wild Data Reaper Report will be out Sunday, January 15th. 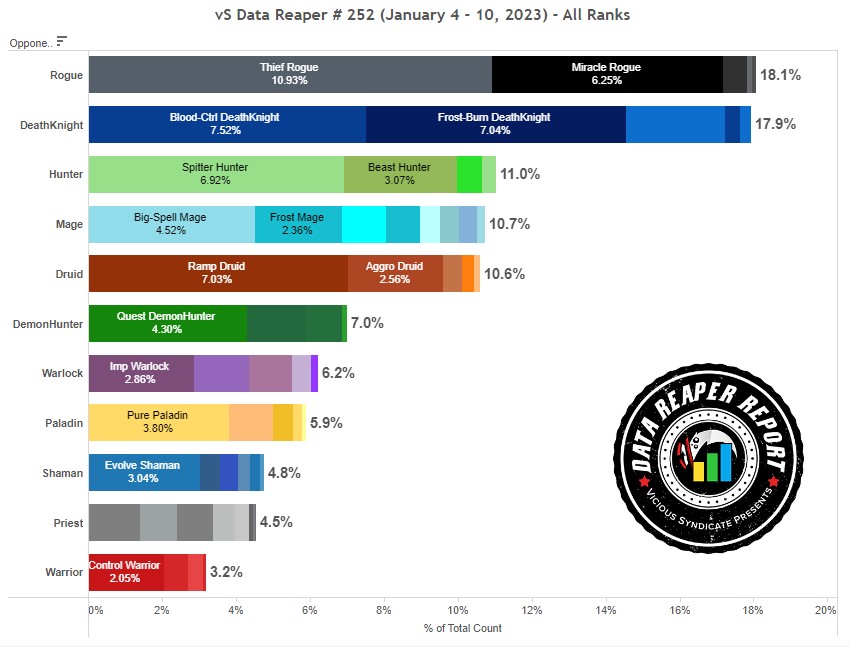 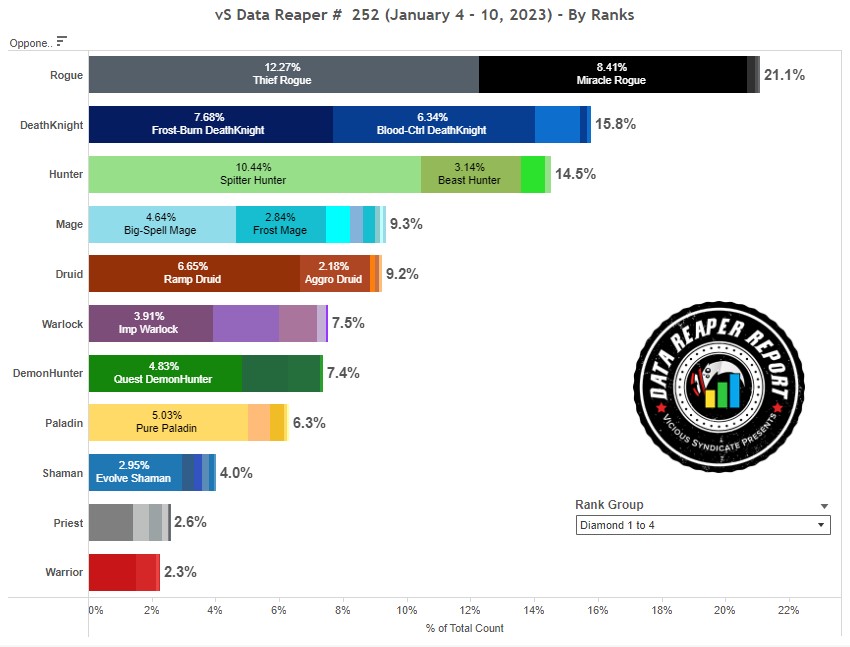 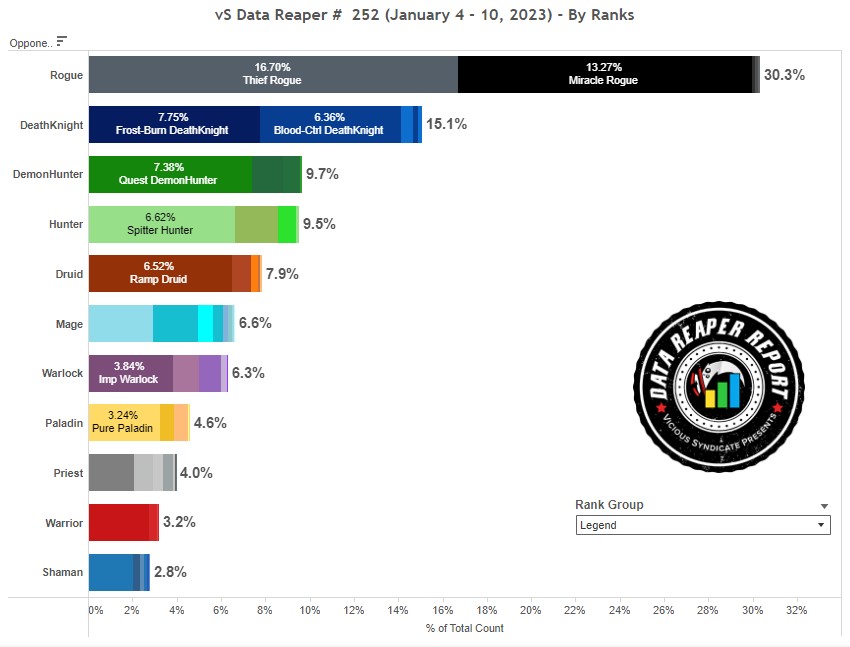 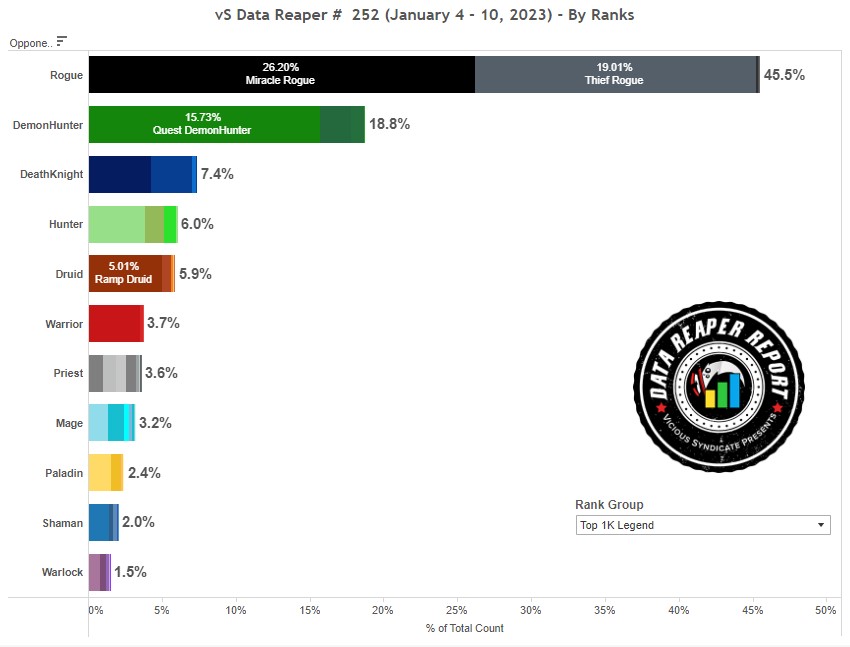 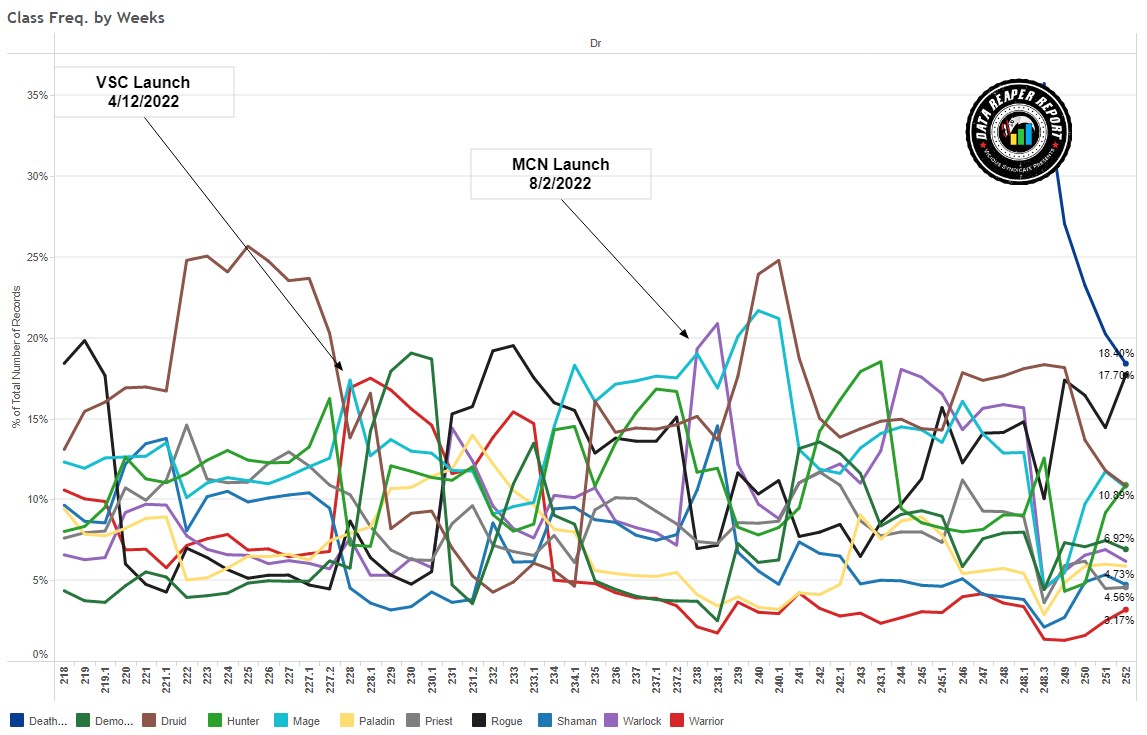 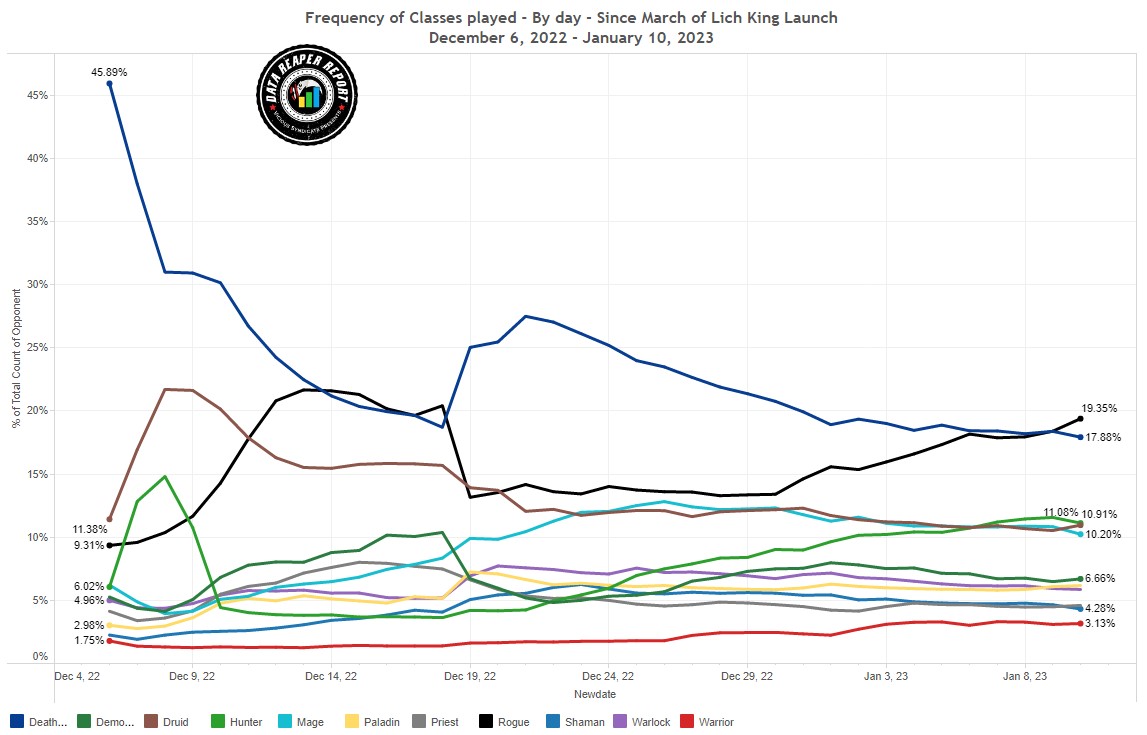 Again, we want to emphasize there’s a very different experience between top legend and the rest of ladder. It’s almost a different game.

We’re approaching apocalyptic Rogue numbers at top legend, with the class reaching a 45% play rate. If we had a nickel every time Rogue dominated the format during the winter holidays, we’d have two nickels, which isn’t a lot but it’s weird that this happened twice in two consecutive years. Demon Hunter is the only class that provides resistance to Rogue at this bracket. Almost every other class is fading. The only exception is an increased interest in Control Warrior, which appears to transition away from Renathal, and some Control Paladin experimentation.

The rest of ladder exhibits quite a bit of class diversity, with only Warrior and Priest struggling for relevance. Spitter Hunter, which is proving to be the most dominant deck outside of legend ranks, is creeping up slowly, rather than quickly taking over the format. Its play rate peaks at 10% so far. Thief Rogue is still more popular than Miracle Rogue. Blood-Ctrl Death Knight is quite popular. Players really want to make that deck work. 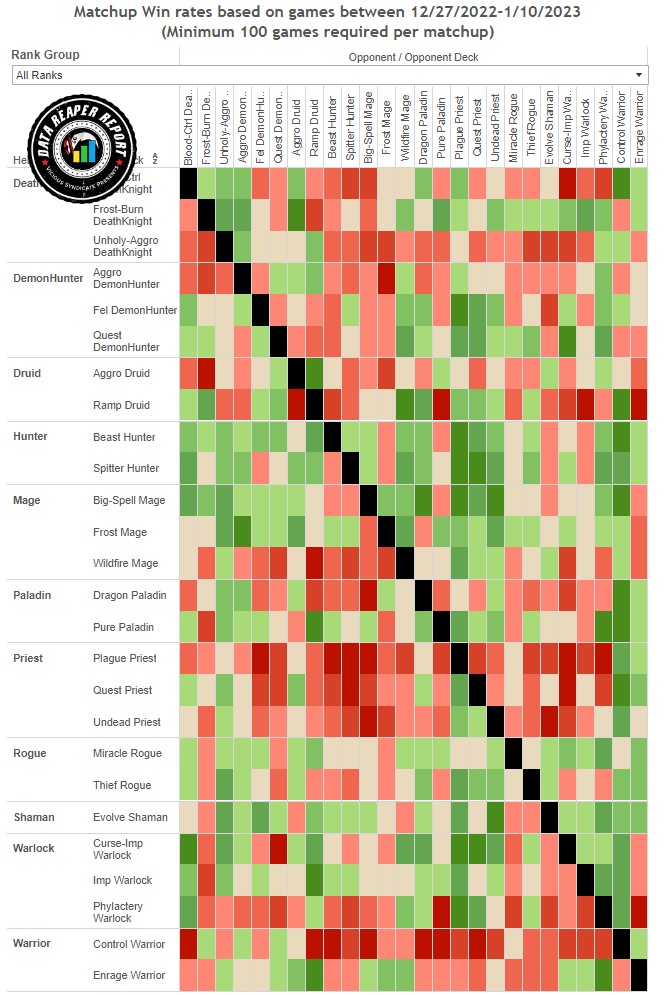 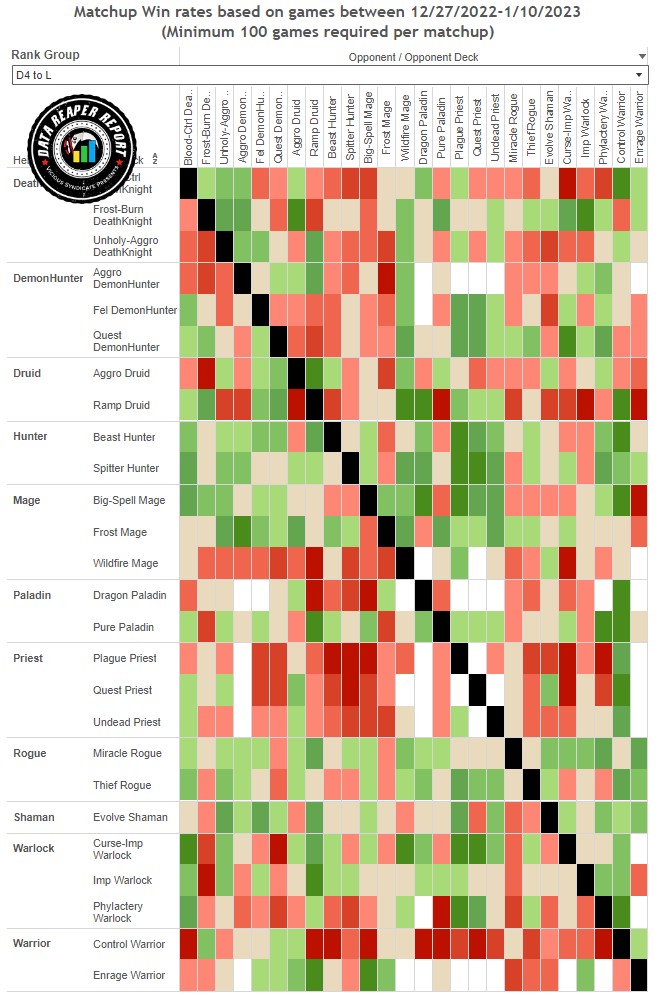 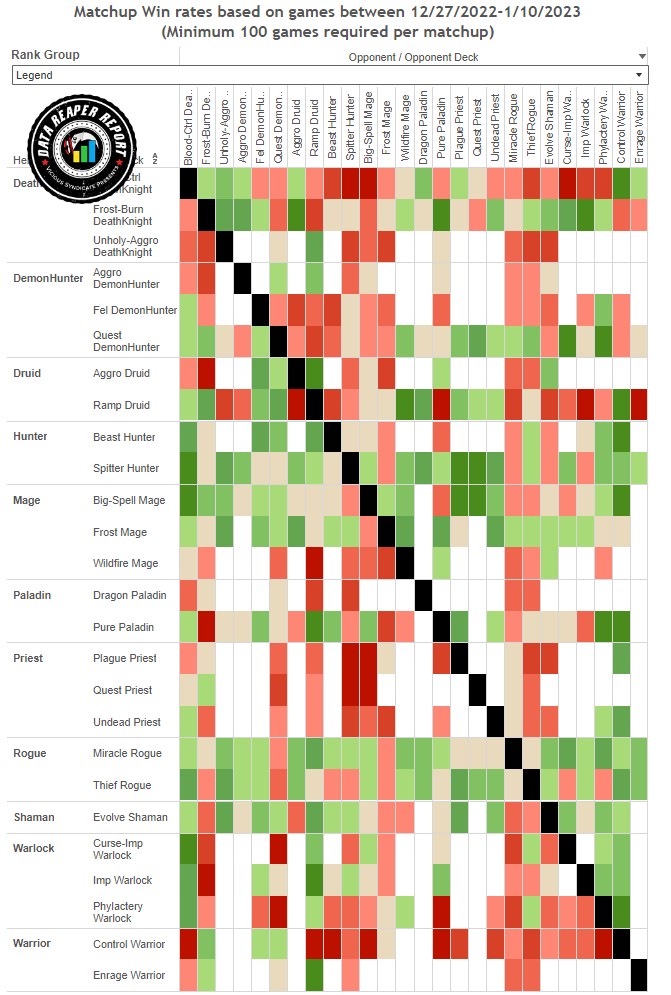 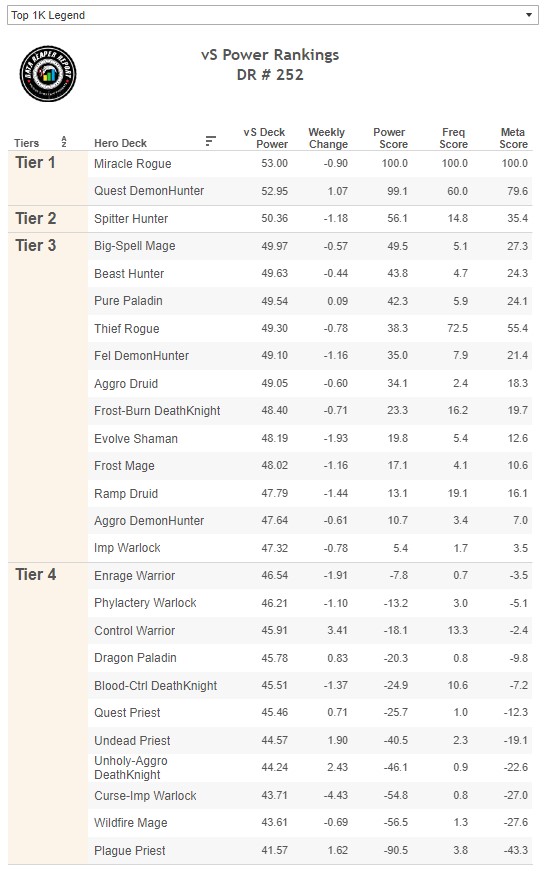 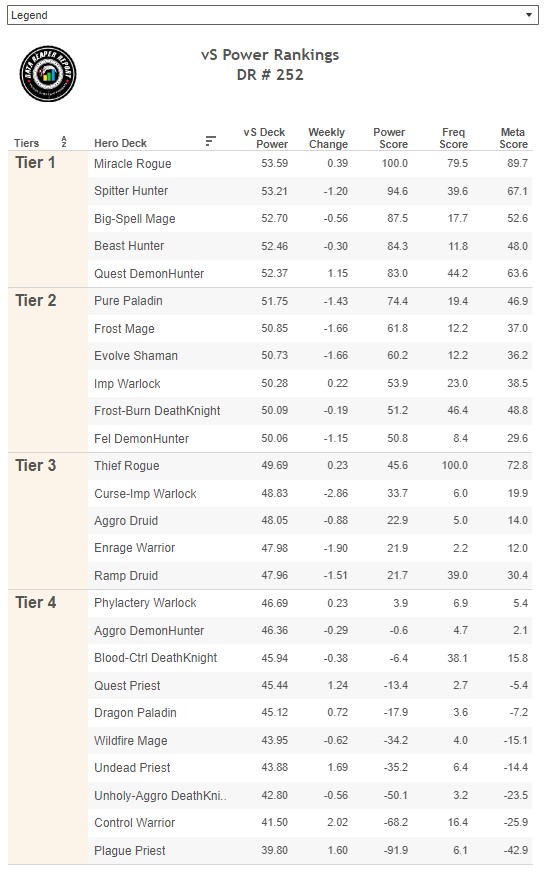 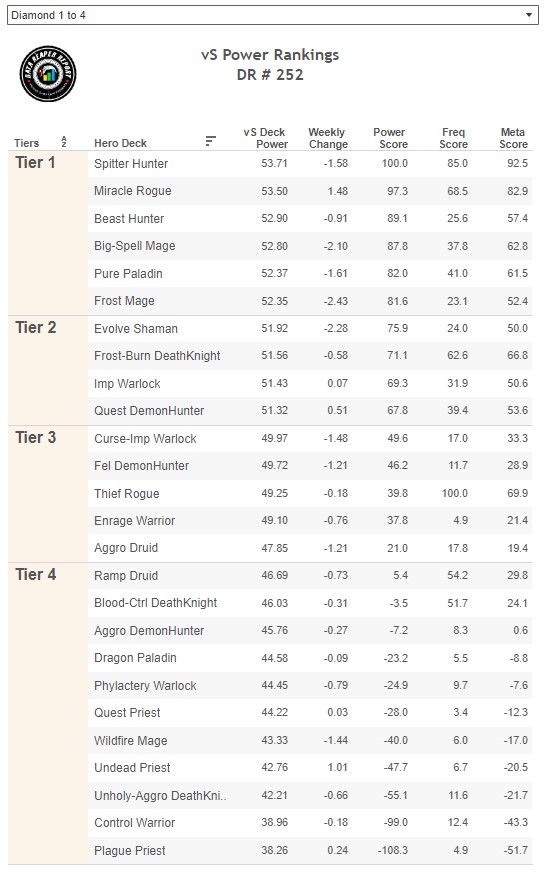 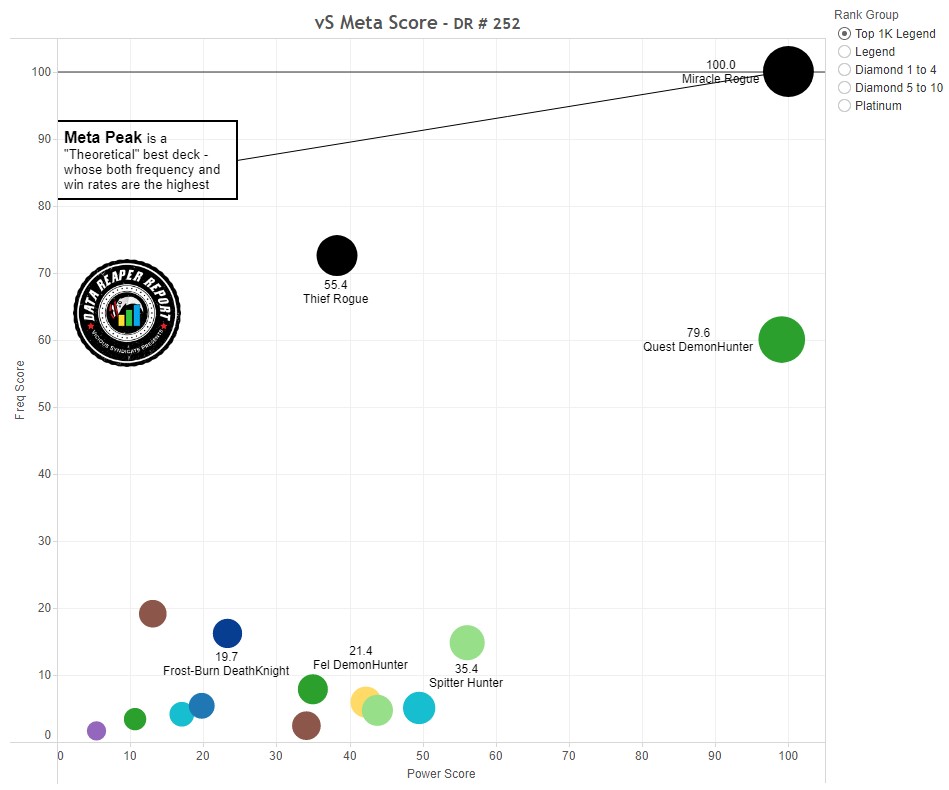 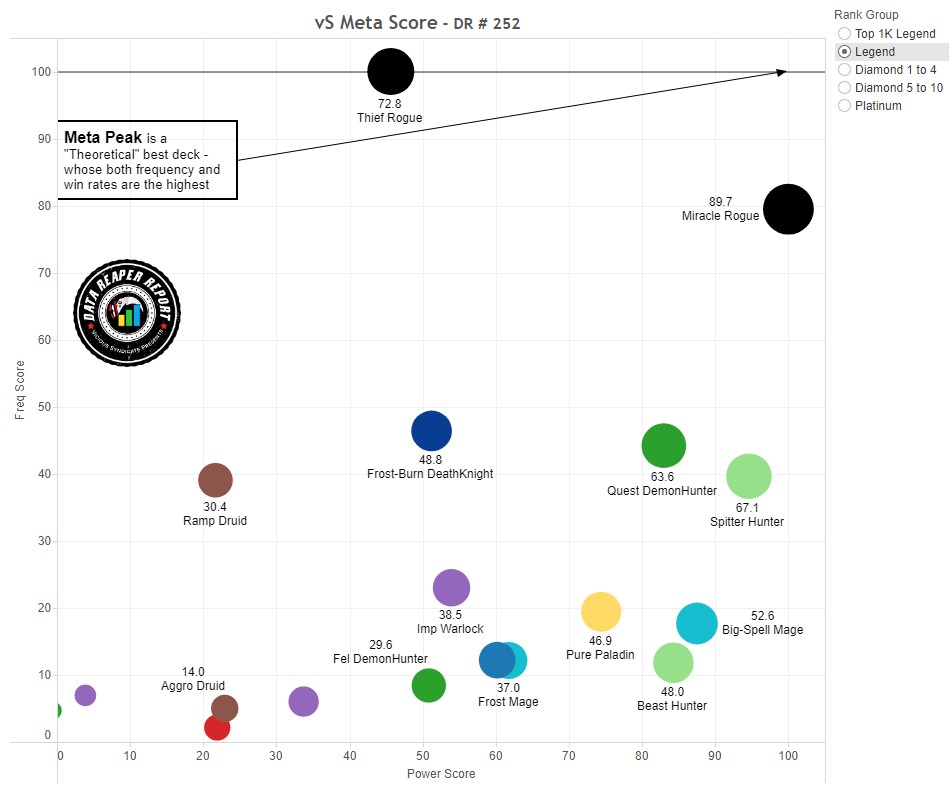 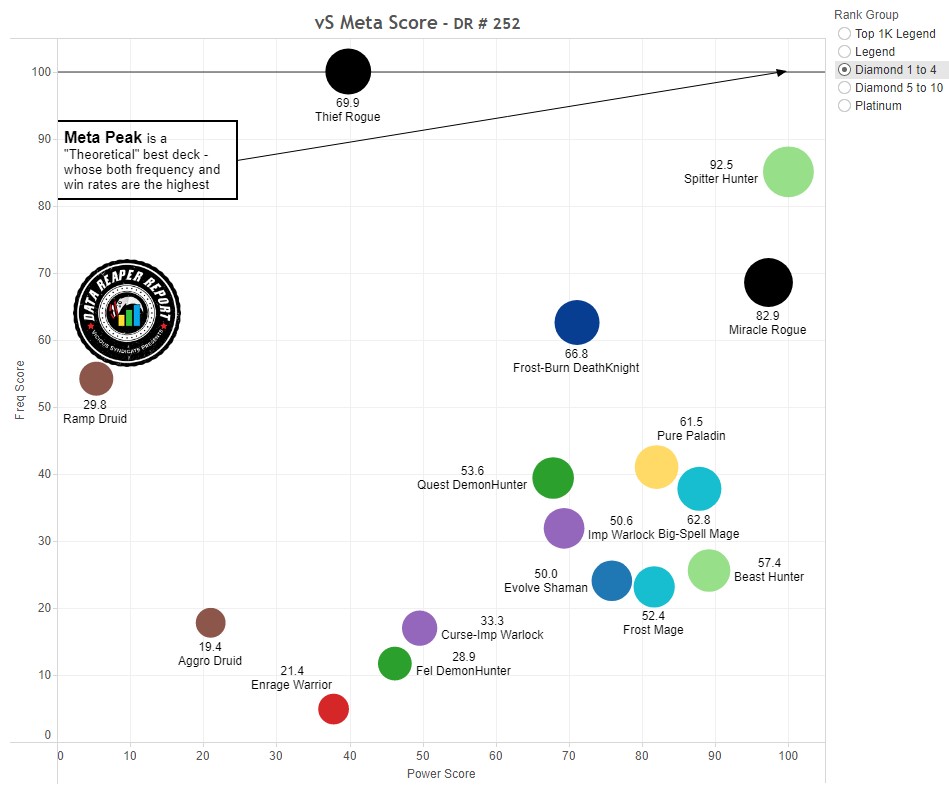 The top legend meta is not just apocalyptic when looking at play rates. Rogue and Demon Hunter are destroying the competitive viability of the rest of the field. Miracle Rogue and Quest DH are the only Tier 1 decks. Spitter Hunter sits at Tier 2, and then everything else is declining into Tier 3 and below. Since most other decks are dying out, Miracle Rogue is facing one of its worse matchups (the mirror) increasingly often, which pushes its win rate down. Meanwhile, Quest DH is taking advantage of its slight favorability against Miracle Rogue to close the gap between the two.

But Demon Hunter’s advantage in the matchup is shaky. We’ve already identified a Miracle Rogue build that no longer loses to Demon Hunter. If Miracle Rogue wants to, it can have no unfavorable matchups whatsoever. Should this idea propagate, Quest DH will find itself incapable of fulfilling its role, pushing Miracle Rogue once again into the undisputed #1 spot.

Elsewhere on ladder, things look much better. Spitter Hunter is the best performer outside of legend, but most classes have a deck or two that can successfully climb. Players don’t feel too limited in their options and can more often pick decks they enjoy or feel more comfortable with. The exception is the absence of strong reactive strategies, but even this could be changing as soon as today.

Control Paladin’s sample is still too low for this report’s database, but the deck is coming back and looking strong with a new iteration that drops Renathal. The most important thing to note about the new Control Paladin is its promising initial results at beating both Miracle Rogue and Quest Demon Hunter, making it a potential meta breaker at higher levels of play. Unlike Control Warrior, it’s not completely hapless in other matchups so it’s viable everywhere on ladder. Matchups like Ramp Druid and Thief Rogue are still tough, but they’re not oppressive.

We still want to see more data on Control Paladin. It’s very possible that Rogue/DH players were initially caught off guard by this new deck, so knowledge of it could make them perform better in the matchup at higher levels of play. Considering the decks’ high skill ceiling, we can’t rule this out, but so far, we haven’t seen them improve their performance against Control Paladin over time. In addition, Control Paladin can still tweak its build to improve its performance against them.

We’ve had a chance to look at the consequences of cutting Serrated Bone Spike in Miracle Rogue, and the results are interesting. We can confidently say that Quest DH is not favored against this version of Miracle Rogue, since Bone Spike is such a liability in the matchup. The featured build might even have a tiny edge against Demon Hunter. The main price to pay is a worse Hunter matchup, but this seems to be a very good move at top legend, where Demon Hunters outnumber Hunters by a huge margin.

Basically, you can optimize Miracle Rogue to have no unfavorable matchups, unless Control Paladin or Control Warrior prove otherwise.

The Quest Demon Hunter build figured out last week is perfect. There is a concern that Demon Hunter may not be able to continue soft countering Miracle Rogue if Bone Spike declines in play, but this transition has yet to pick up enough traction.

We did get some good data on running both Irondeep Trogg and Vicious Slitherspear in Frost-Burn Death Knight, while cutting Nerubian Vizier. It’s a sidegrade move that doesn’t significantly change the outlook of the deck, so it’s up to personal preference.

It might be time to drop Corpse Explosion in Blood-Ctrl Death Knight. It’s very weak against both Demon Hunter and Rogue. It doesn’t pull enough weight in other popular matchups either, such as Frost DK.

There has been some experimentation with Face Hunter, but its small sample is already indicative of a deck that’s significantly worse than both Beast Hunter and Spitter Hunter. It’s capable of rushing Demon Hunters more effectively, but it sacrifices too much in the Rogue matchups (as well as others) to get there. We don’t think it will gain further traction.

At no point on ladder is Ramp Druid a good deck, yet it still sees quite a bit of play. There has been much criticism directed at the design of the deck and Wildheart Guff, but if a deck performs poorly and still sees play, it means players are having fun with it. That’s worth something.

Aggro Druid is also in a bad competitive spot, but is far less attractive to players, so it’s not very noticeable.

Control Warrior may have cracked the code on how to hard counter Quest Demon Hunter while exhibiting a decent matchup with Miracle Rogue. This is done by taking last week’s build, dropping Renathal and adjusting it to a 30-card build, replacing Outrider’s Axe with Blacksmithing Hammer. We retain the strong defensive tools that make the Demon Hunter matchup strong, but we can also more consistently pressure the Rogue and hit them harder in the face before they overwhelm us with their value. Astalor in combination with Shadowstep is a key component in the Rogue deck that makes it so difficult to outlast and demands more proactivity from the Warrior.

The missing link that is absent from the common 30-card build is Far Watch Post. This might be the best card in the format to combat both Miracle Rogue and Quest Demon Hunter, which has helped Warrior gain precious percentages in these matchups. To make way, we cut Finley (less impact in a non-Renathal build) and one Goldshire Gnoll. We estimate that the featured build has a 65%+ win rate against Quest Demon Hunter and a 50%+ win rate against Miracle Rogue, making it a niche meta breaker at around top 100 legend, where the popularity of these two decks reaches absurd numbers.

Control Paladin is emerging to become another double answer to both Miracle Rogue and Quest Demon Hunter, but one that has a much more well-rounded matchup spread compared to Control Warrior, making it a playable deck throughout ladder.

Like Warrior, Paladin has the defensive sturdiness to outlast Demon Hunter’s damage and the removal toolkit to challenge Rogue’s late game power. Equality being drawn so consistently through Knight of Anointment helps us answer Sinstone Graveyard without taking damage. Anachronos is also an extremely valuable reset tool when we’re overwhelmed, setting up the potential for counterpressure. Mr. Smite buffed by Lightforged Cariel gives us a path to end the game before the Rogue manages to stack Astalors.

A key adjustment to the popular build we highly recommend is, of course, Far Watch Post! Flight of the Bronze is an underwhelming card that is very weak against both Demon Hunter and Rogue, so we believe this change could gain further percentages in these matchups. We’d still like to see how Control Paladin performs against a well-prepared Miracle Rogue or Quest Demon Hunter player, but a 55%+ win rate in both matchups is not out of the question.

Frost Mage continues to be a great choice to climb to legend with, as its matchup against Spitter Hunter carries more weight every day. The deck collapses at higher levels as it cannot compete with strong Rogue and Demon Hunter players.

Big-Spell Mage manages to do a bit better against such an apocalyptic field since it beats Demon Hunter, but Rogue remains a nightmare.

Warlock is highly oppressed by the Rogue/Demon Hunter duo, so forget trying to play this class at the highest MMR bracket. Imp Warlock variants are decent ladder climbers, but there are still better choices out there.

Control Priest decks can have a good matchup against Miracle Rogue because of the class’ removal toolkit, but they cannot match up against the rest of the field, making them unplayable.

In the last 24 hours, there has been increased interest in Svalna Priest, but it’s too recent for us to comment on.

Evolve Shaman is fine, but no one cares. We do wonder if the player base has collectively become tired of evolve mechanics, or whether this specific iteration is just not interesting enough. Evolve Shaman might just be a blander version of Thief Rogue if you squint hard enough.

In a bleak narrow meta environment, Uther could come in to save the day and bring reactive strategies back into the fray. Control Paladin is showing some potential at loosening the grip of Rogue/Demon Hunter at higher levels of play, and is still an accessible deck to play at lower ranks of ladder, making it superior to the fringe Control Warrior.

To ensure an advantage in the Rogue/Demon Hunter matchups, we want to see how Far Watch Post performs in this deck. It’ll be interesting to evaluate how these matchups develop over time. We’ll be back to report on how things have played out next week.