Welcome to the 253rd edition of the Data Reaper Report! 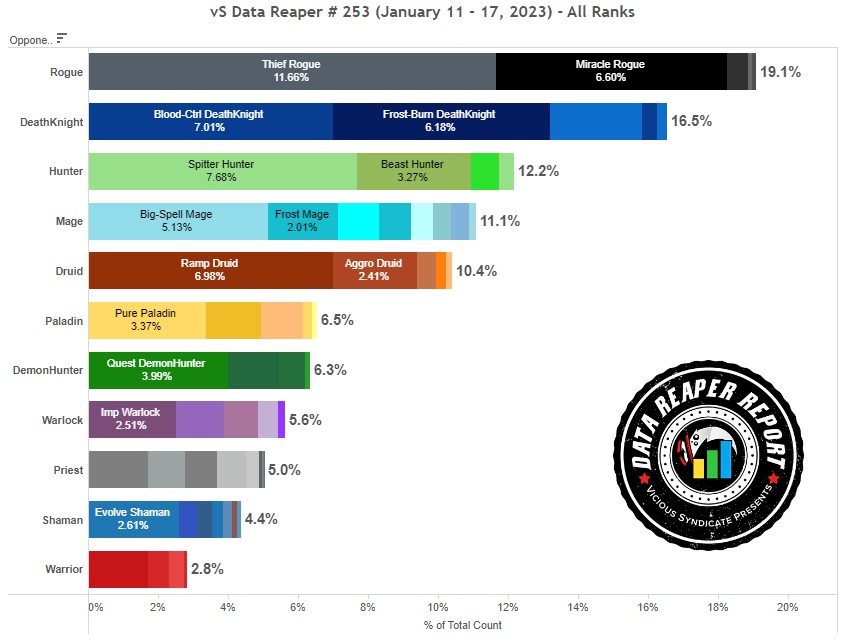 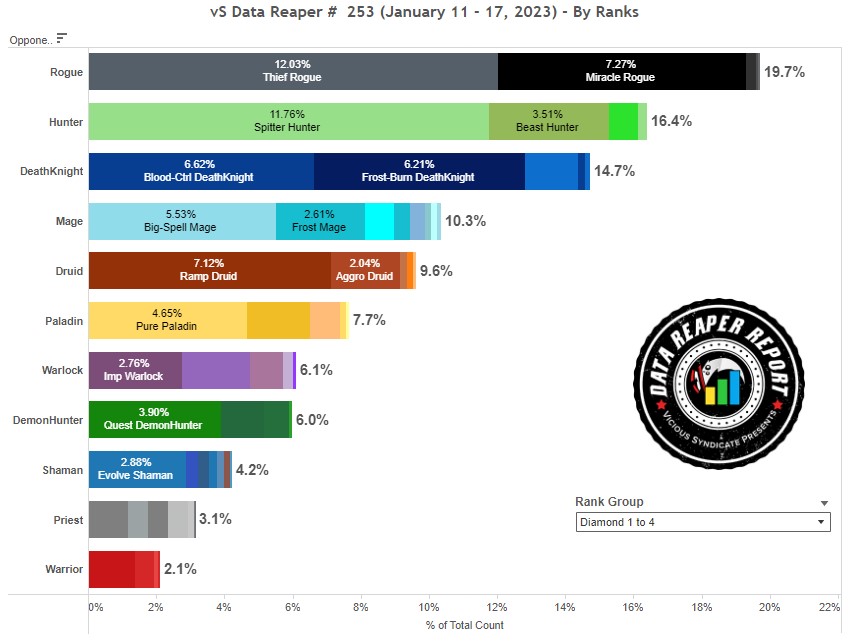 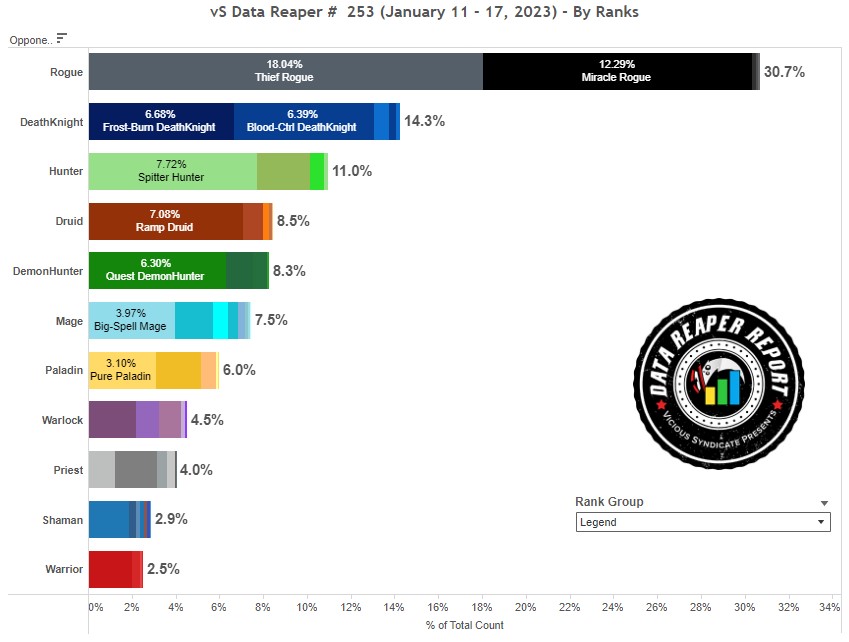 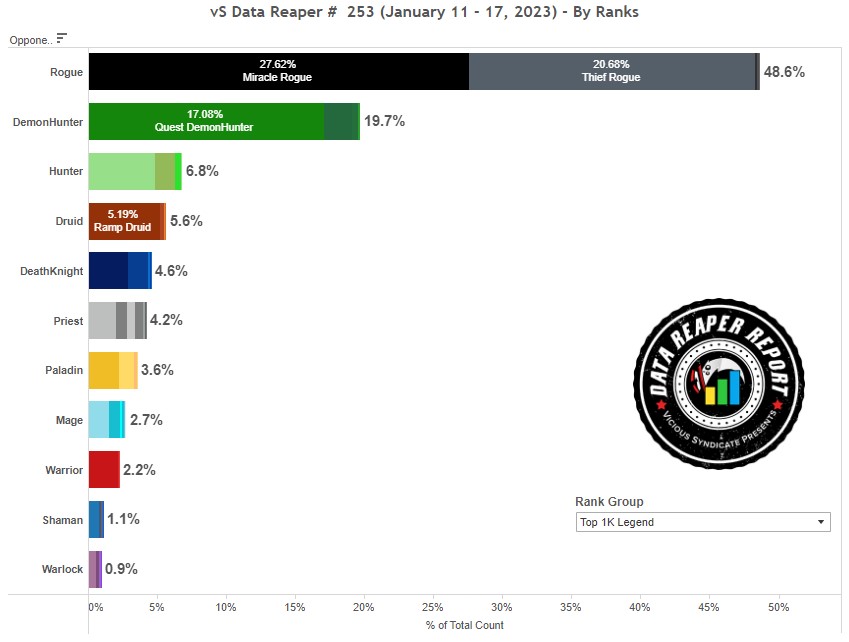 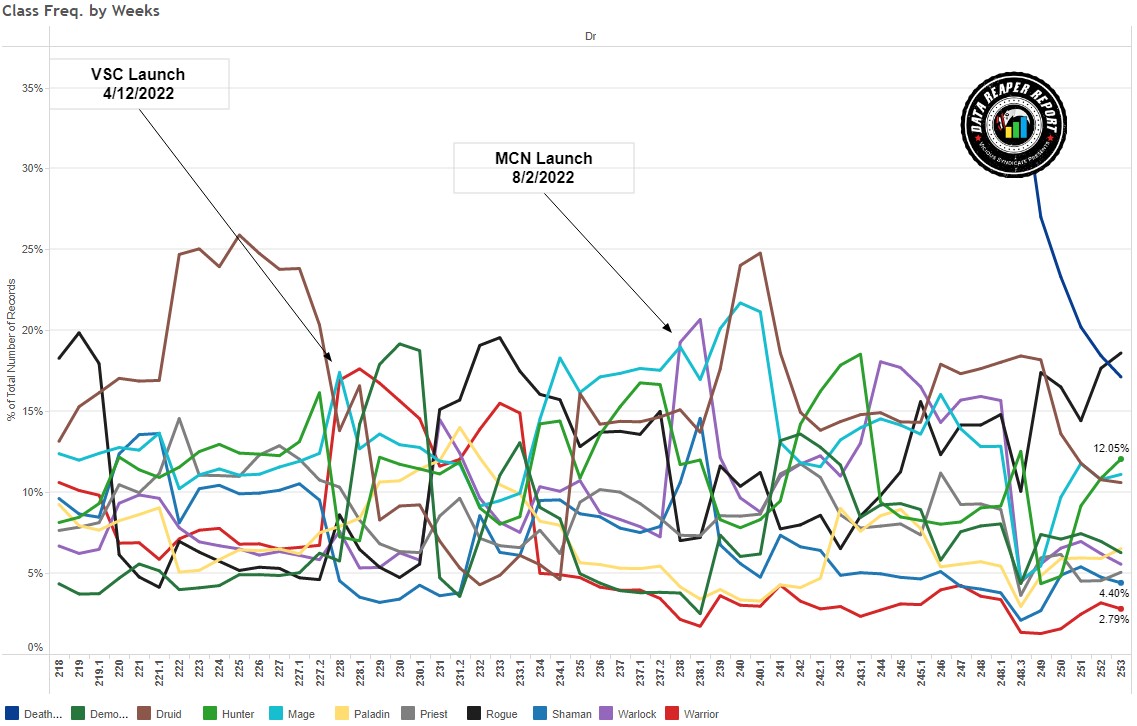 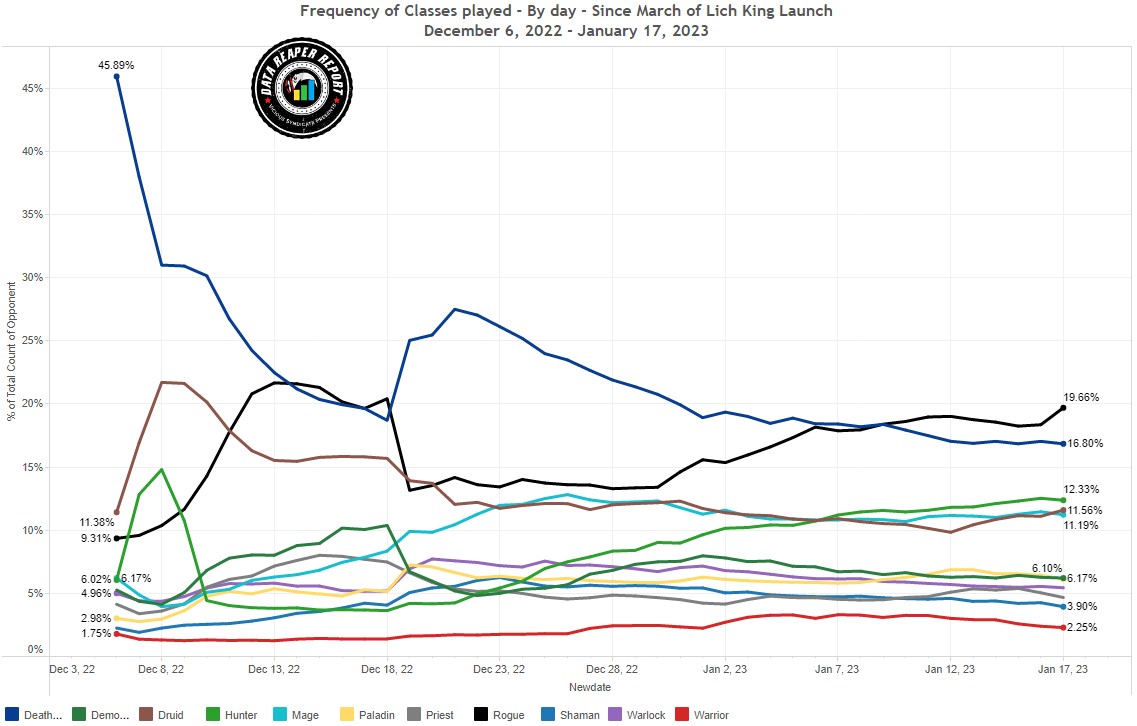 The meta has reached peak staleness. Top legend is a smoldering wasteland, long destroyed by the overbearing presence of Rogues. The class makes up nearly 50% of the field at higher levels of play. Niche counter decks try to emerge and provide resistance to the tyrant class but fail to gain traction for long. Control Paladin hasn’t moved the needle. Svalna Priest is the latest hope to emerge in small numbers, but don’t hold your breath.

The rest of ladder doesn’t look as grim. Though Rogues are still very popular at lower ranks of legend and upper Diamond, there is quite a bit of strategic diversity from Bronze through Diamond. Many viable decks exist. You are likely to meet different kinds of opponents on your way up the ladder. Death Knight remains the most popular class at Diamond 5 and below. Spitter Hunter hasn’t climbed to a particularly high play rate despite its overwhelmingly dominant win rate. 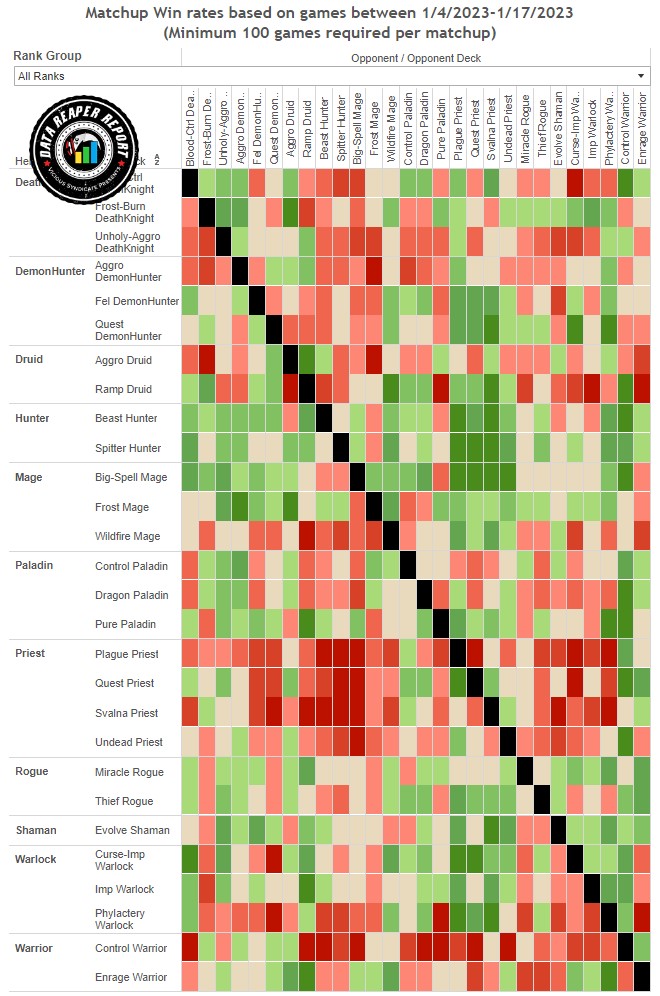 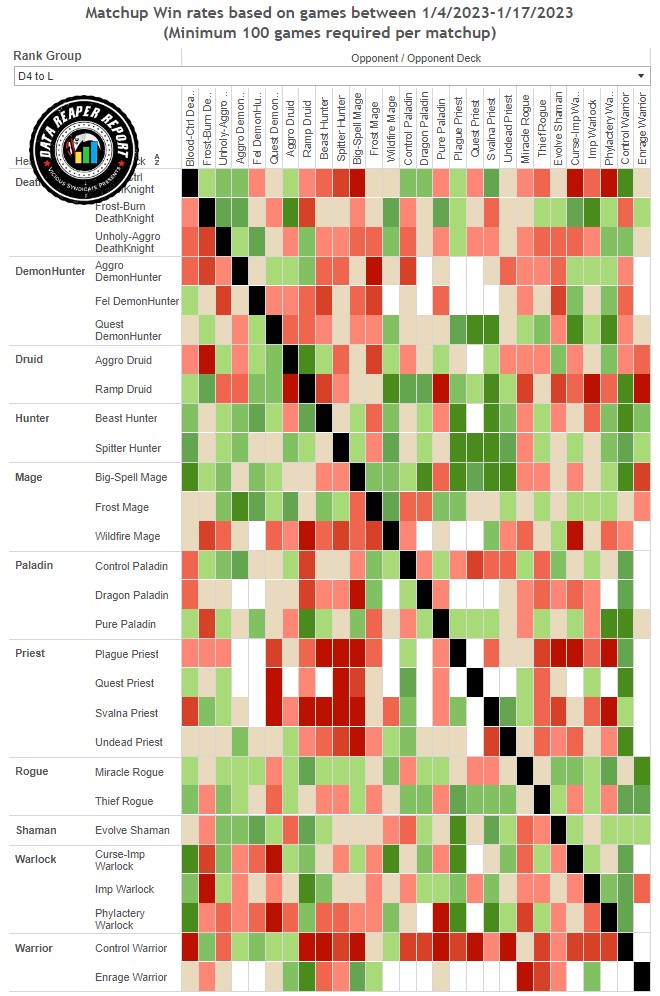 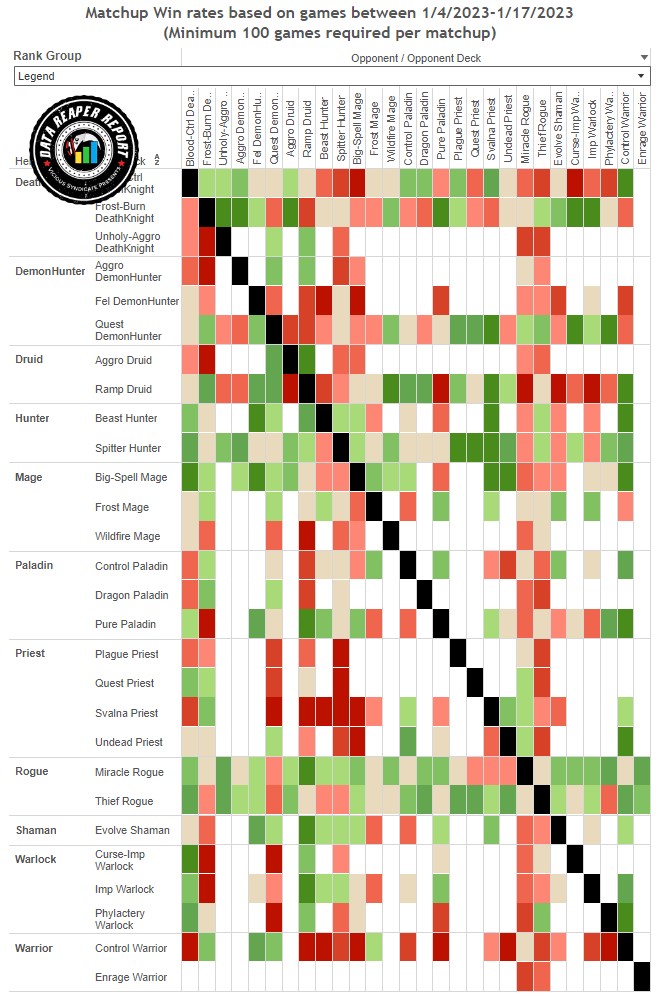 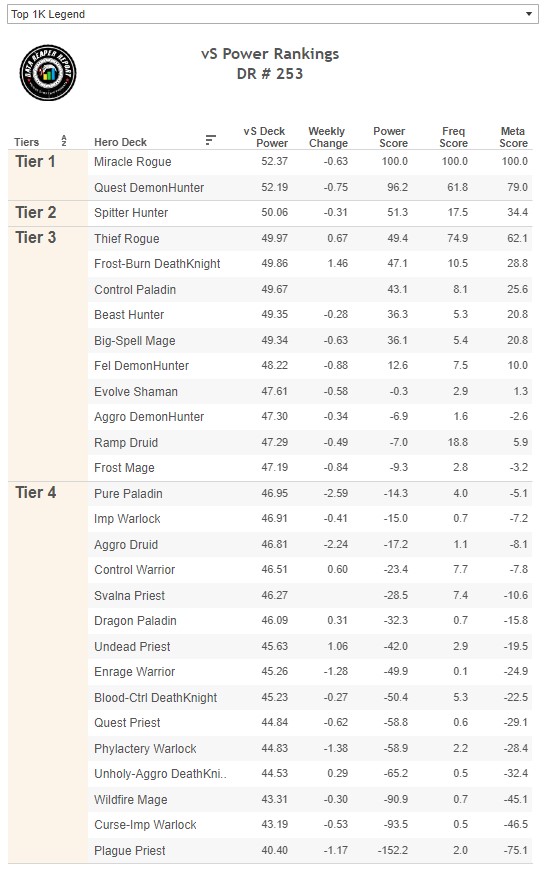 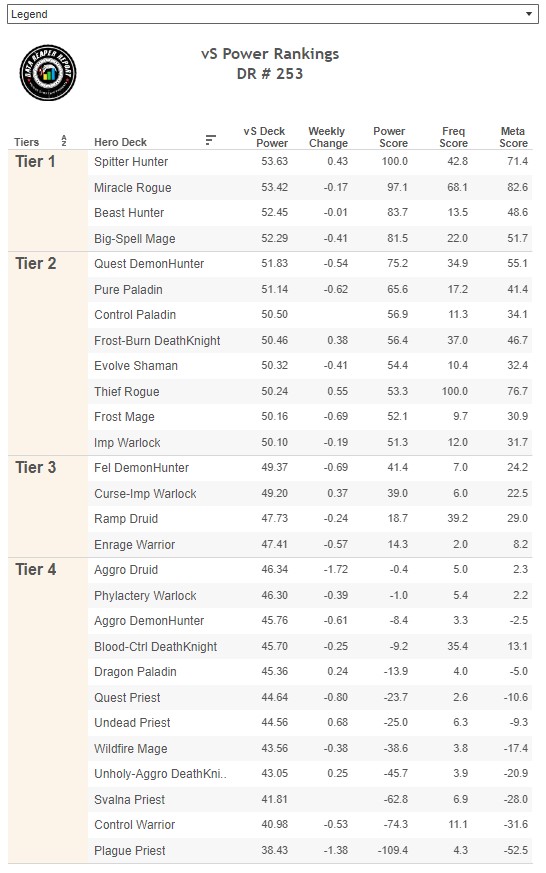 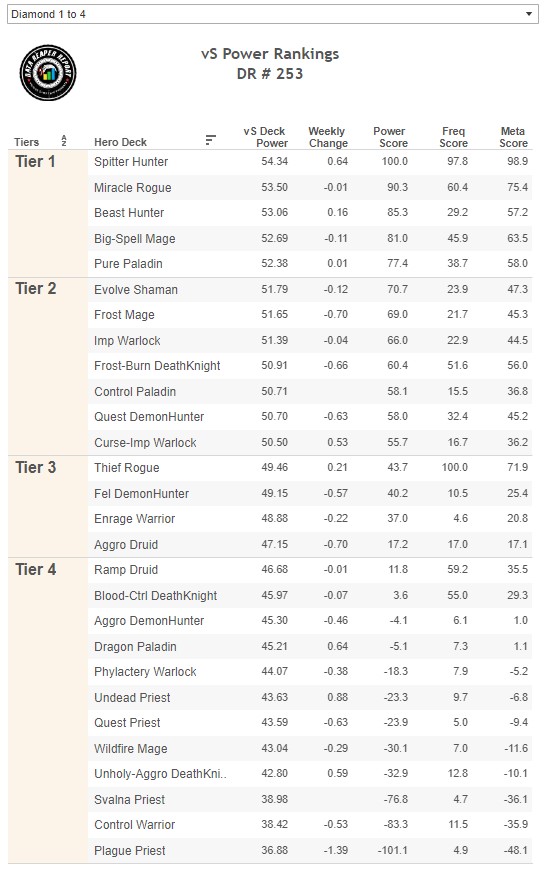 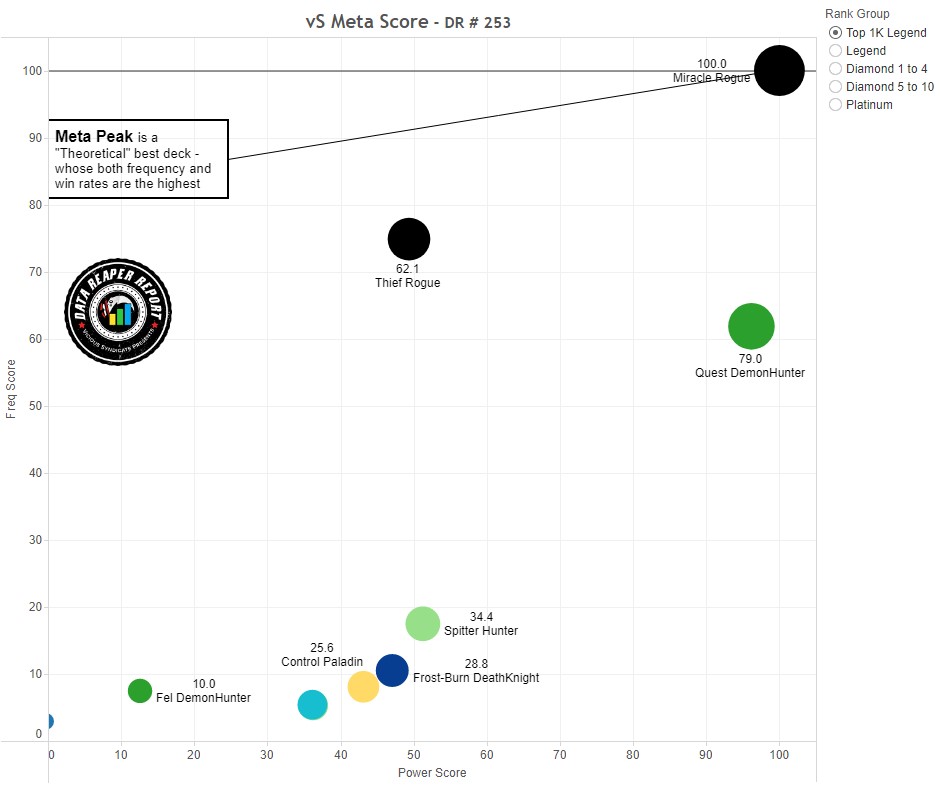 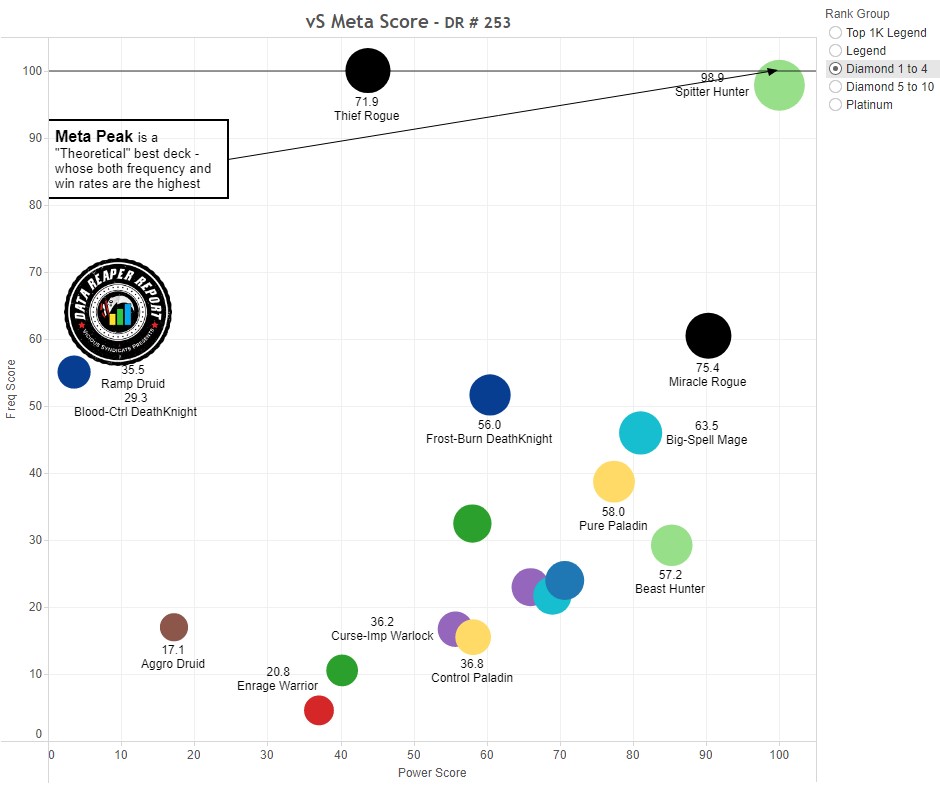 The picture is very clear. At top legend, Miracle Rogue and Quest Demon Hunter are the best decks. Spitter Hunter and Thief Rogue sit close to the 50% mark, and every other deck looks like a suboptimal choice.

Like clockwork, the moment Control Paladin started to gain traction after last week’s report, we saw its matchups against both Miracle Rogue and Quest DH worsen at higher levels of play, to the point they’ve reached a 50-50 stalemate. There are two likely reasons for it. The first is that top legend players stopped assuming their Paladin opponent is a Rogue in disguise, so they started to mulligan for the matchup correctly. The second is that Miracle Rogue and Quest DH are very difficult to play, so it takes time for players to learn and adjust to an emerging new matchup.

This means that while Control Paladin is a respectable deck compared to other failing strategies in the high-level format, it cannot be a meta breaker. It needed to win these matchups to make up for its difficult Thief Rogue matchup to stand a chance. Alas, it has sunk to Tier 3. It is, however, a solid if unspectacular Tier 2 deck outside of top legend.

Svalna Priest is another product of a desperate format. It has successfully managed a slightly favorable matchup with Miracle Rogue, joining Quest DH in the shortlist of decks boasting a positive win rate against the card flinging monster. It has a slight unfavorable against Thief Rogue, while beating Control Paladin and Control Warrior. We understand why a few individuals could have success with the deck at top 100 or top 10 legend exhibiting this kind of matchup spread. But this deck loses to almost everything else, making it unplayable in a slightly more diverse format.

The rest of ladder is nowhere near as bad. There are plenty of competitive decks available on the climb to legend, and even though Spitter Hunter does seem to be the best choice, players aren’t completely choked out of other good options. There are eight classes that have at least one Tier 2 deck from Bronze to Legend. The one issue is that when the top legend meta is this narrow, it makes it very unlikely that content creators can find new discoveries, leading to a sense of staleness even in the more diverse format found throughout ladder. As a result, there are many classes that have nothing new to report.

The holiday period and patch cadence mean that Team 5 didn’t have a window to make balance changes over the last few weeks, but next week will finally bring about a big balance patch. Priority should be to address Rogue, Demon Hunter and Hunter (you cannot nerf Rogue and Demon Hunter without doing something about Shockspitter). But there are also likely going to be buffs to underperforming strategies. Warrior and Priest in particular need something.

With the meta narrowing further and further into very few matchups, Rogue is pivoting harder into winning the one matchup that gives it the strongest challenge: Quest Demon Hunter.

We’ve seen a rise in the popularity of Wicked Stab, which offers Miracle Rogue burst and reach. As we’ve said before, cutting Bone Spike leads to a 50-50 matchup with Quest Demon Hunter. But, if we add Wicked Stab on top of that, the matchup becomes favored for the Rogue! This change does not negatively affect Miracle Rogue’s performance in the mirror or against Thief Rogue.

The top legend cuts are Crabatoa (weak vs Demon Hunter) and one Gone Fishin’. If you’re not playing at top legend, you should keep those cards and cut Door of Shadows instead, which isn’t as important when facing a more aggressive field.

Thief Rogue has started doing the same thing, by adding Wicked Stab over Sketchy Stranger. Shadowstep is another card that could make way instead.

Quest Demon Hunter seems to have done all it can to combat Rogue and there is no way to perform better against it. It will likely remain a dominant deck at top legend since Thief Rogue continues to be highly popular despite not producing great results. That matchup is more comfortable than Miracle, which is a deck that can give the Demon Hunter a hard time if it wants to.

Spitter Hunter is making one last stand to combat the Rogue/Demon Hunter domination. There’s a trend emanating from top legend (popularized by McBanterFace) to cut Conjured Arrow and Keeneye Spotter since they are not useful cards against Demon Hunter. Instead, we run Doggie Biscuit and Harpoon Gun, which are good pressure tools.

These changes have little to no impact on the Rogue matchups, so we’d run this alternative take in a field with a very high population of Demon Hunters.

Svalna Priest is a deck with very fringe use at top legend. Much like Control Warrior, it’s a product of an extremely narrow environment in which only a few matchups matter. To the deck’s credit, it manages to have a favorable matchup against Miracle Rogue, Control Paladin, and Control Warrior. The matchup against Thief Rogue is also close, so if you’re facing an endless number of Rogues, it can work.

The problem is that it loses to everything else. Quest Demon Hunter makes sure that Svalna Priest is never truly great at higher levels of play, and once you add more matchups into the equation, the deck tanks. It’s also very difficult to play and action intensive, so if you play the game on mobile or just looking for something to climb to legend with, we advise you to stay away from this deck.

The featured build is inspired by PocketTrain, who has had the most success with the deck. We dropped Identity Theft (not great) for Flash Heal and Devouring Plague.

Control Paladin has failed to counter Miracle Rogue and Quest Demon Hunter. Once knowledge of its presence spread, Rogue and Demon Hunter players have learned, adjusted, gaining significant percentages in the matchup. There was nothing the Paladin players could do to respond. Far Watch Post could not get the job done.

So, Paladin can go 50-50 with both decks, which is respectable, but once you add Thief Rogue to the equation, Control Paladin fails to become a genuine meta breaker at higher levels of play. It’s a reasonably decent deck outside of top legend though, so we’ve adjusted the build back to its original form to be better suited for the ladder climb.

Control Warrior has established itself as a good DH counter, but it seems impossible for it to gain a meaningful edge on Miracle Rogue. The best it can do is go 50-50 with Miracle, then Thief Rogue is a huge stumbling block as it’s much more difficult to run out of resources.

Much like Svalna Priest, this is a fringe deck born out of a desperate format.

We throw in the towel. Nothing can stop these decks except external intervention. Abuse them while you can and hold on to your golden copies. The end is near.