Welcome to the 158th edition of the Data Reaper Report!

Our Data Reaper Project, including the Data Reaper Live has 2,300 active contributors and we thank them wholeheartedly. Contributing to the Data Reaper project through Track-o-Bot or Hearthstone Deck Tracker (recommended) allows us to perform our analyses and to issue the weekly reports. Without the community’s contribution, there would be no project. Contributing data is very easy and takes a few simple steps, after which no other action is required. If you enjoy our content and would like to make sure it remains consistent and free – Sign Up! 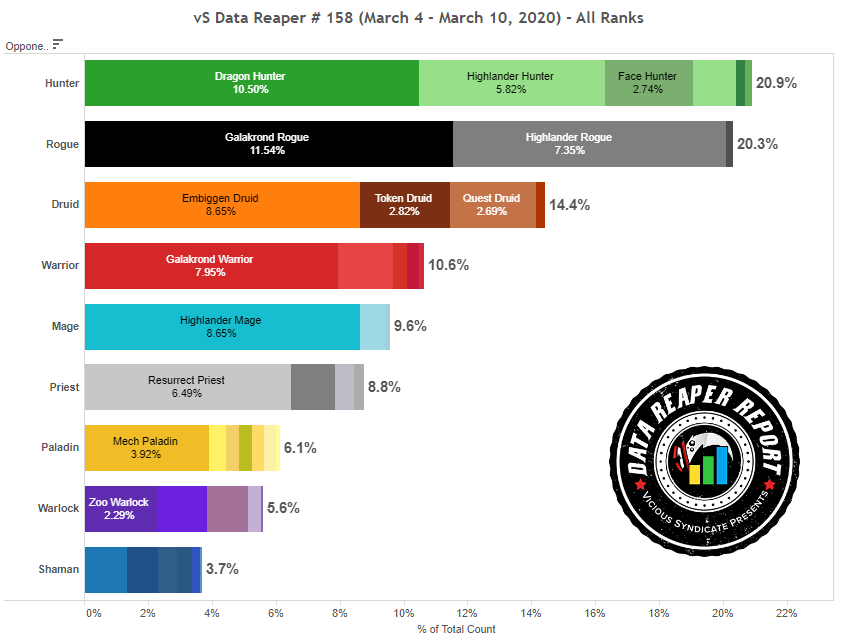 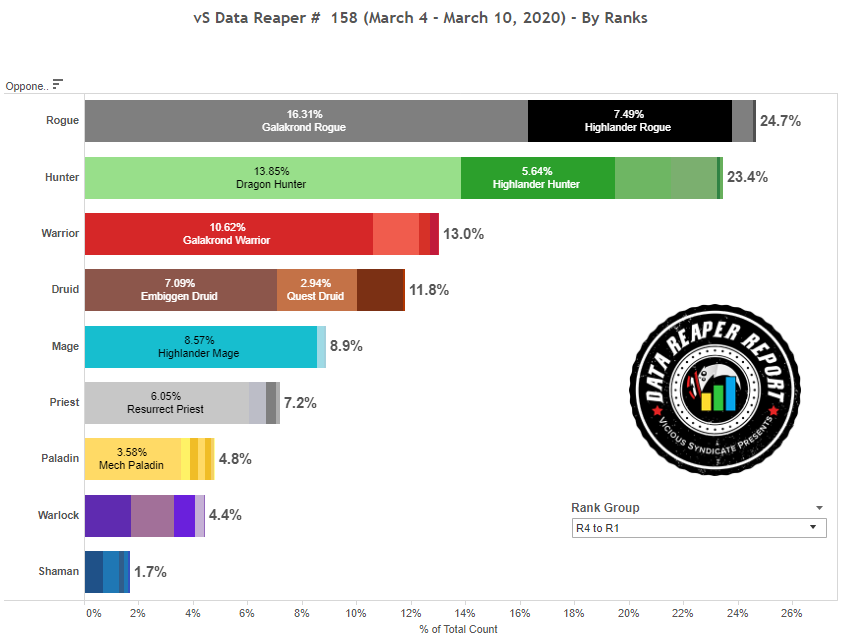 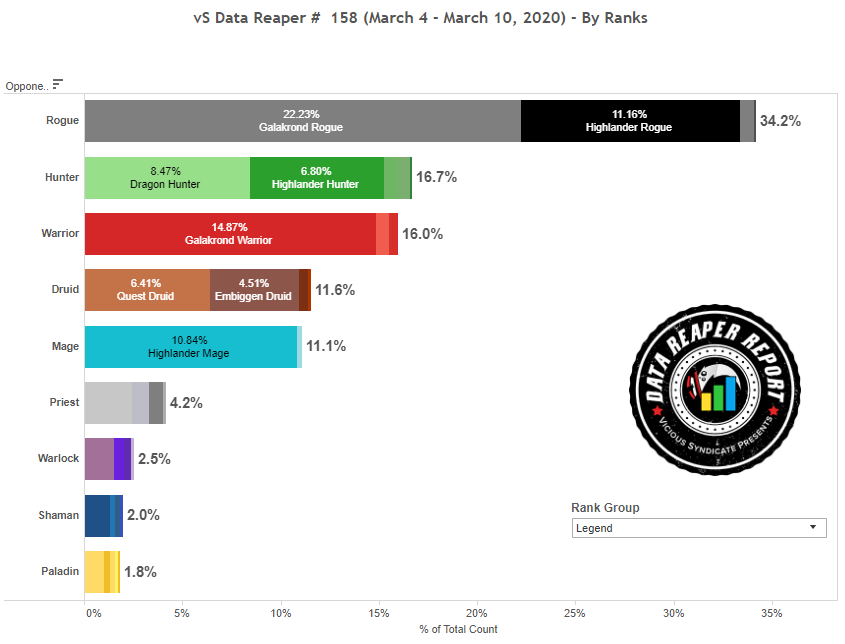 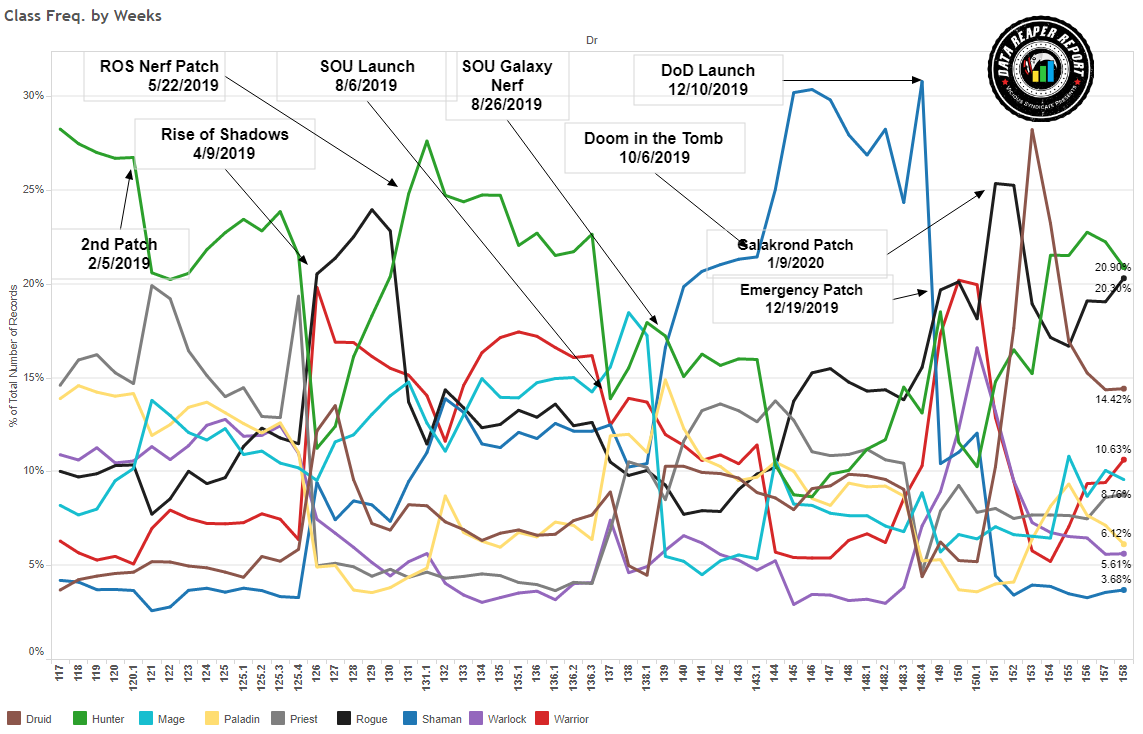 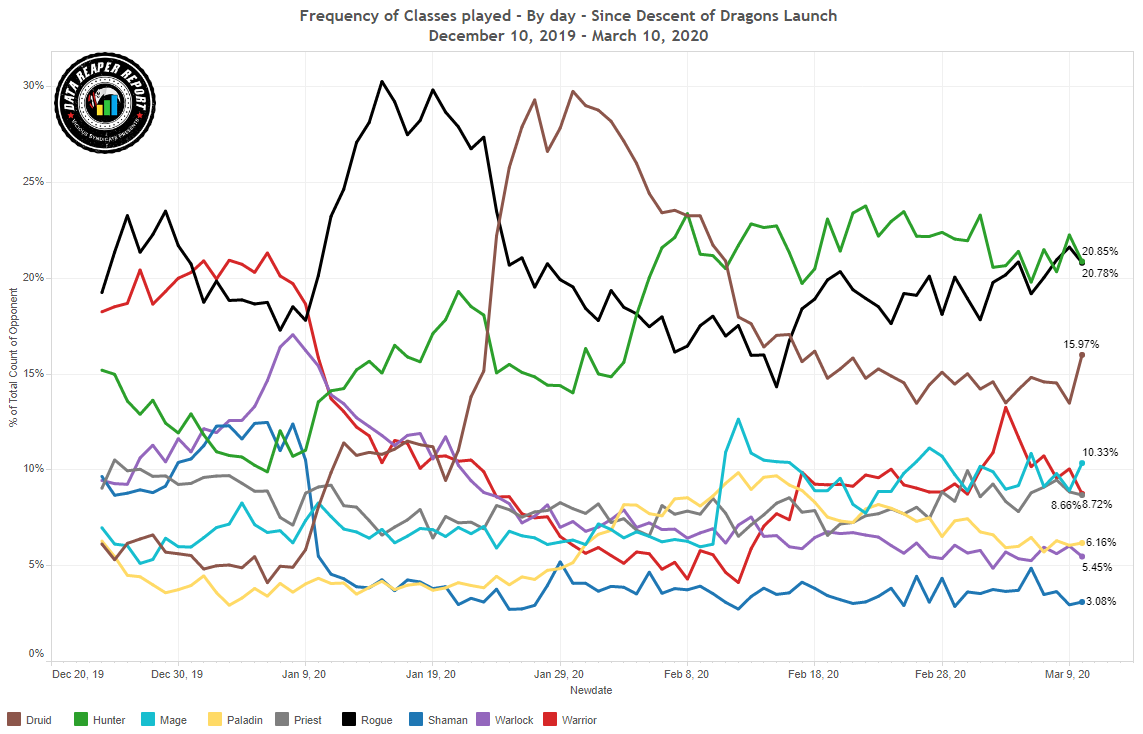 Throughout this report, the most important message to keep in mind about the current meta relates to the behavior of Rogue, Warrior and Hunter. Galakrond decks are rising, while Dragon Hunter’s momentum has been halted. This has had an effect on both the performance of certain archetypes, as well as the performance of certain cards within archetypes.

Both Galakrond Rogue and Highlander Rogue have risen in play. Galakrond Rogue has proven to be a very powerful and reliable deck, while Highlander Rogue has been trending up due to individual success stories.  Rogue is extremely popular at legend, where it makes up nearly 35% of the field. The early-month legend meta often imitates the previous month’s top legend meta, and Rogue’s dominance is without rivals.

Galakrond Warrior’s prevalence pattern is the perfect imitation of its Rogue counterpart. The higher you climb ladder, the more of the deck you see, peaking at legend where it is nearly as popular as Dragon & Highlander Hunter combined.

Hunter has finally declined in play, though it is still very popular throughout ladder. Dragon Hunter is the dominant archetype, while Highlander Hunter becomes relatively more common at legend.

Mage seems to have stabilized, and it will likely require a bigger Hunter fall in order to pick up further traction. So far, Highlander Mage’s performance has only suggested that it is being grossly overplayed on ladder.

Resurrect Priest and Mech Paladin are relevant players on the climb to legend, but they are noticeably absent at legend. Priest players are avoiding the painful popularity of Rogue, while Paladin players should not be happy with the rise of Galakrond decks in general.

Warlock is quickly joining Shaman in the list of the irrelevant. You can still meet a few Warlock players, but the higher you climb, the more of them give up. 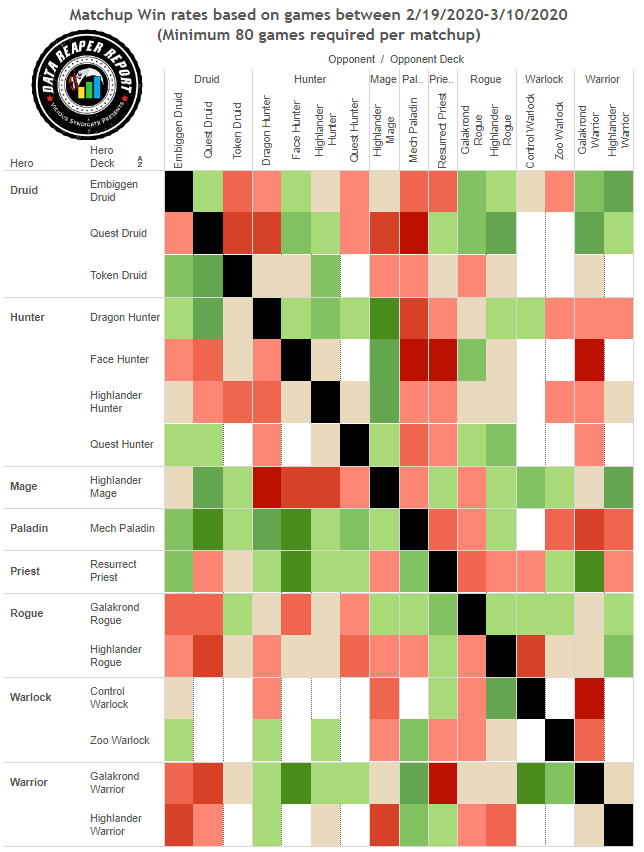 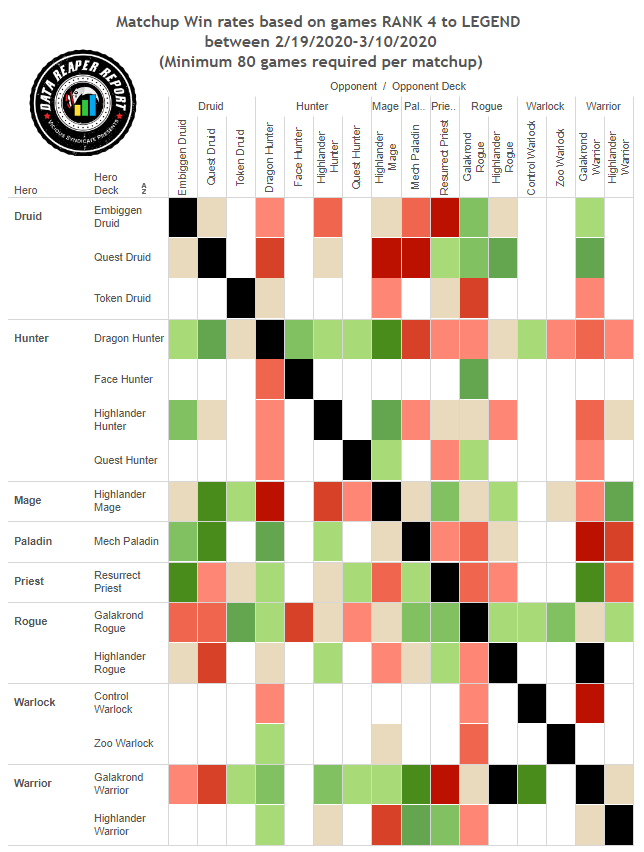 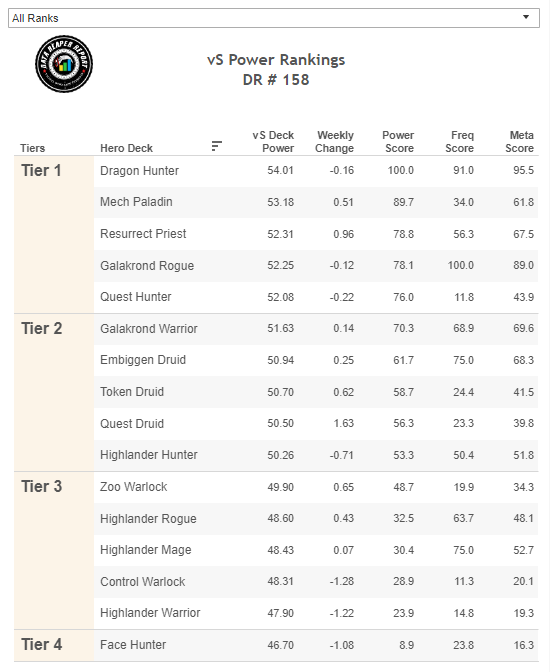 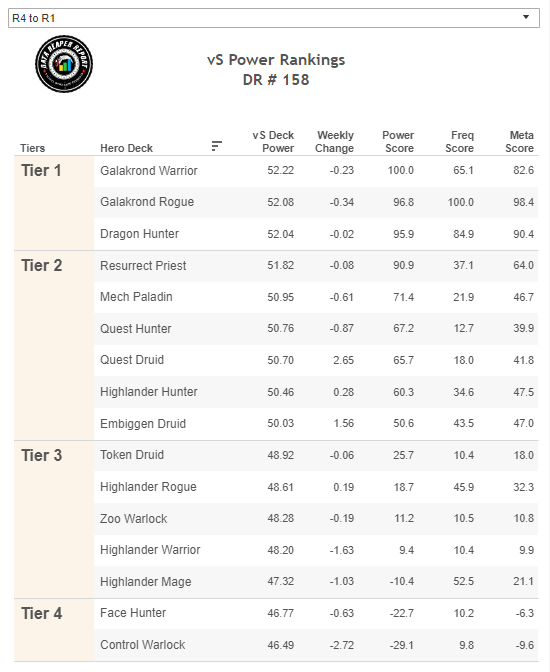 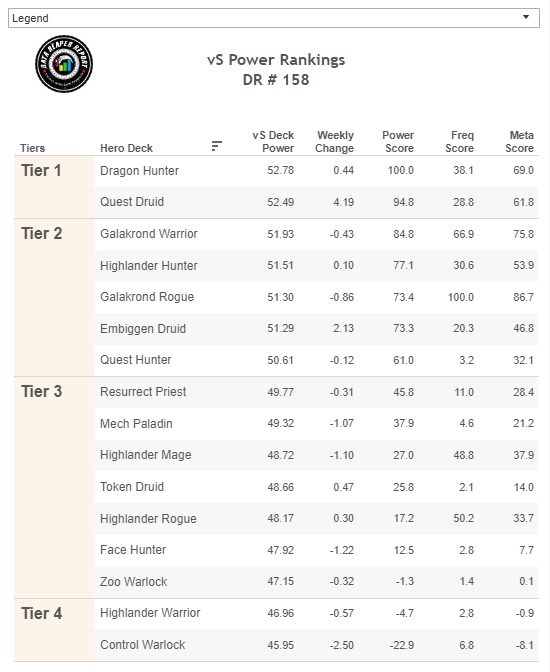 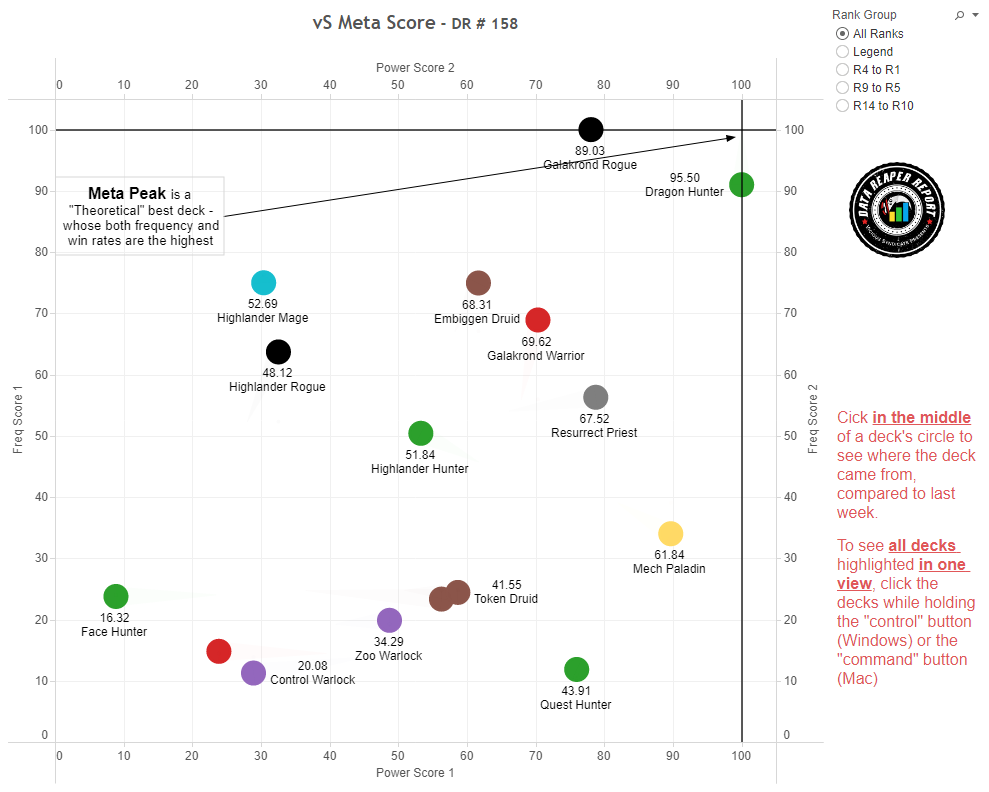 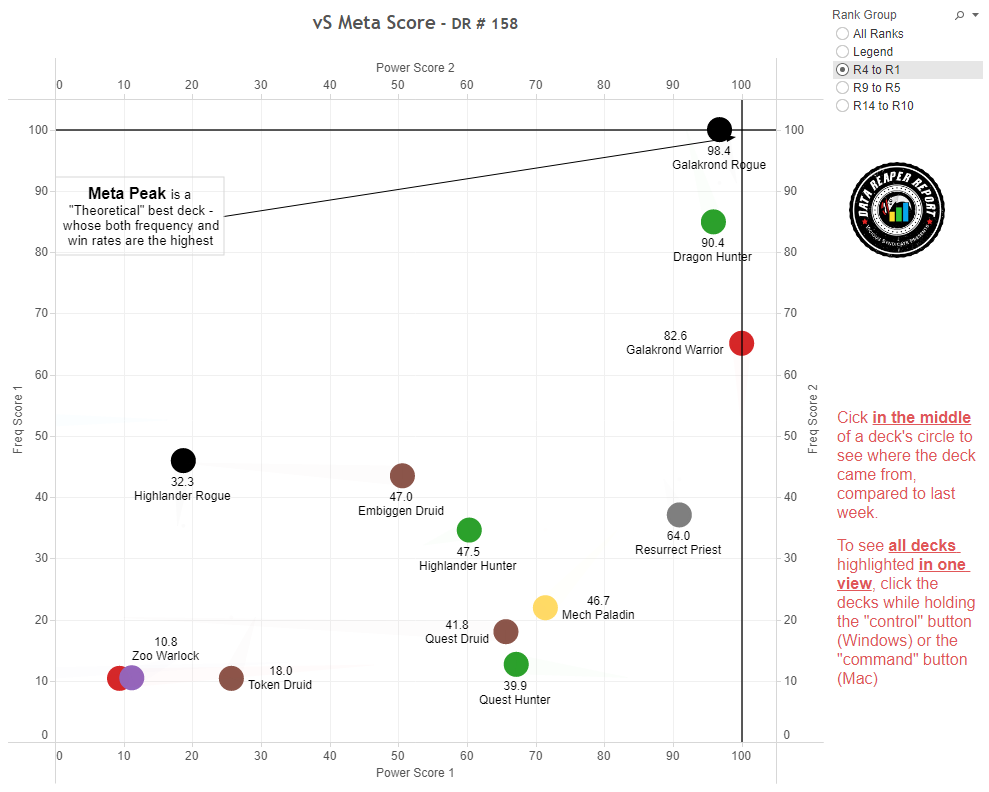 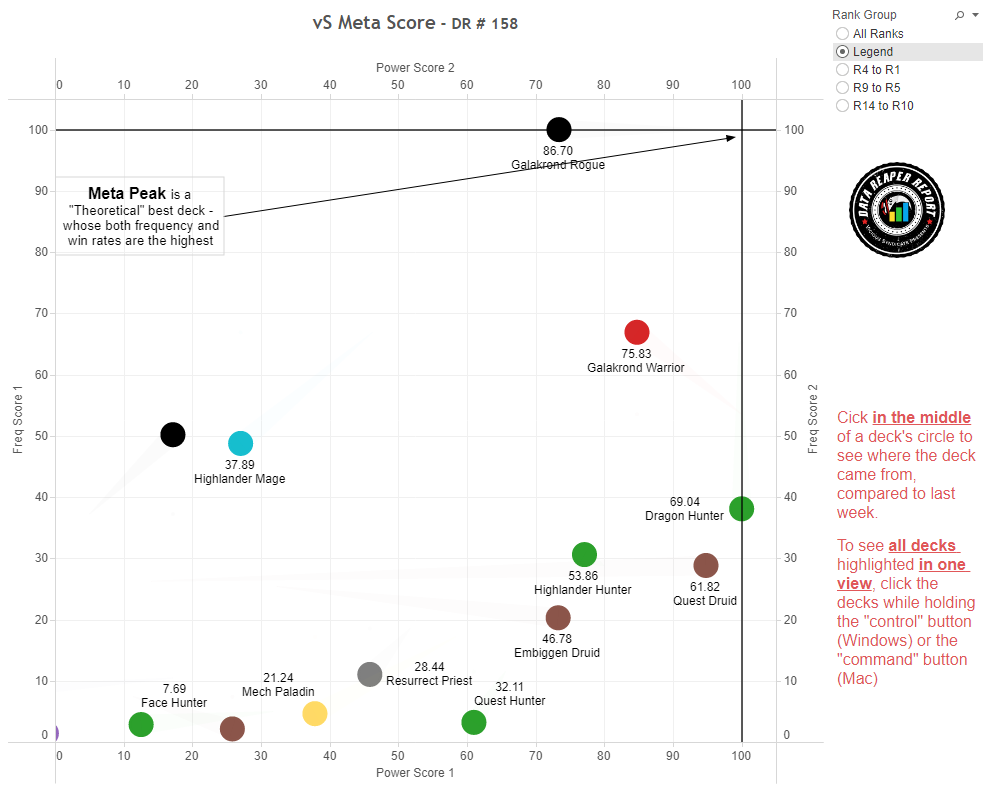 The meta has become increasingly skewed towards Galakrond decks, and we’ve reached the point where Druid could make a big comeback. This is particularly true at legend, where Quest Druid’s weighted win rate rises by an incredible 4%, all the way to Tier 1 thanks to its superb matchups against Rogue and Warrior.

Embiggen Druid is also recovering, and the deck now boasts a positive win rate throughout ladder thanks to its positive Rogue/Warrior matchups. Embiggen Druid’s issue is a low skill ceiling, shown by its consistently worsening matchups at higher levels.

It’s important to remember that Galakrond Rogue and Galakrond Warrior are still superb options throughout ladder. The only thing we can take from these results is that when their presence is particularly high, there is a way to combat them.

Even though Dragon Hunter slightly declined this week, there is no indication that the deck is any worse than it was last week. Perhaps, the increased attention to Rogue and Warrior will end up being beneficial for the archetype, since it performs so well against Quest Druid and Highlander Mage (a Quest Druid counter). There does seem to be a cyclical meta developing among the top meta decks, which could last until April. Highlander & Quest Hunter remain competitive options within the class, though they are still inferior to Dragon.

Since we don’t expect Hunters to really go anywhere, it’s unlikely that Highlander Mage will ever be a better ladder deck than what it has been in DoD so far. It can always high-roll a game and feel unstoppable, but its matchup against Hunter is just too awful to make it reliable.

The difference in how Resurrect Priest and Mech Paladin perform through different portions of ladder is striking. At lower ranks, they’re Tier 1. At ranks 4-1, they’re still strong performers that comfortably sit at Tier 2. At legend, they fall to Tier 3, which explains their absence at this rank. The main cause for this phenomenom is the difference in the meta between these rank brackets. Priest is crippled by the constantly rising presence of Rogue, while Paladin suffers at the hands of both Warrior and Rogue at higher levels. If we established a theoretical “cycle” of the meta, Priest & Paladin should do better once Hunter rises again to counter Druid (which counters Rogue & Warrior).

Warlock and Shaman, of course, have no part in this cycle. Zoo Warlock is a mediocre aggressive deck that does well against midrange dragon decks but loses to Galakrond decks and control decks with strong AOE (Priest, Mage). Control Warlock is seeing its win rate crash because of its horrendous matchup against Warrior. Shaman doesn’t have a single deck that looks close to being competitive. Perhaps some aggressive Shaman deck can shave the bottom of Tier 3 on its best day, but that’s about it. Buffing Sludge Slurper back to its pre-nerf form could be nice.

Rogue is the most popular class from rank 4 upwards, and its presence is particularly dominant at higher levels of play. Galakrond Rogue is a very reliable deck that has good matchups against most of the field, with the exception of the Druid class. With the mirror matchup becoming increasingly common, the persistent rise of Galakrond Warrior and the recent decline of Hunters, we now recommend running Boompistol Bully.

Interest in Highlander Rogue has increased due to the recent success of a few players, though the deck still looks largely inferior to Galakrond Rogue. We continue to recommend Jambre’s build.

The meta is gravitating towards Rogue and Warrior, and Hunter’s difficult matchup against Galakrond Warrior is the biggest obstacle to a successful climb with the class.

Dragon Hunter can’t really adjust to changes in the meta. It’s highly reliant on hitting its efficient curve, and tech choices usually hurt the consistency of the deck. Highlander Hunter, on the other hand, isn’t as reliant on its curve due to the highlander payoff cards offering it big swings. We’ve reached the point where Rogues and Warriors are so popular that Boompistol Bully becomes a net gain, even at the expense of cutting the secret package in order to make room for it.

Warrior can now be considered the 3rd most influential class in the format, following the successful rise of Galakrond Warrior to the top of the meta. The deck has become a staple throughout all levels of play.

There is little reason to change the featured build. All of our previous findings are still true today, including the importance of Eternium Rover, SN1P-SN4P and Leeroy Jenkins.

Highlander Warrior, on the other hand, is in danger of disappearing. While Galakrond Warrior is a good counter to Hunters, Highlander Warrior relied on the popularity of this matchup in order to remain competitive on ladder, so the shift from Hunter to Rogue has hurt its standing against the field.

Despite the small decline of Hunters, Highlander Mage is still in a fairly weak spot. Mage just can’t seem to gain an edge against either Galakrond deck, which is crucial in order to improve its ladder performance. While Rogue and Warrior do not kill opponents quickly, they carry too much burn for Mage to be able to stabilize consistently. Unlike Quest Druid, Mage has poor life gain options and every face damage sticks. Even if the game goes long, these decks always have a chance of finishing Mage off before they’re overwhelmed. This is why these matchups are close.

After suffering from setbacks in the last couple of weeks, Druid’s fortunes are changing. The Galakrond meta is upon us, while the hated Dragon Hunter is finally relenting. This is a suitable environment for more success coming from Quest Druid and Embiggen Druid, since they are well-equipped to beat Rogues and Warriors.

Quest Druid’s game plan against the Galakrond decks is pretty straight forward. They’re usually not fast enough to rush you down, which means Oasis Surger and Hidden Oasis offer stabilization in a timely fashion, and Druid’s life gain options line up perfectly against the steady flow of damage. Both Galakrond decks have limited ways to deal with a big board, which means that just playing one Ysera will eventually overwhelm them. However, Druid can often win board much earlier and finish games with Cenarius.

Embiggen Druid is another deck that punishes opponents that give it time to “ramp up” until it eventually overwhelms them. Galakrond decks struggle to deal with a constant flow of buffed threats since their removal options usually do not line up well against them.

While Resurrect Priest has enjoyed farming Galakrond Warriors in the last couple of weeks, the rise of Rogue is denting that enjoyment. The overbearing presence of Galakrond Rogue at legend has pushed Resurrect Priest to near-extinction there, but the deck is still very competitive throughout the rest of ladder. The meta simply gets progressively worse for Priest the higher you climb.

These aren’t encouraging meta trends. The rise of Galakrond decks are exactly opposite of what Mech Paladin wants. Consequently, Mech Paladin has nearly disappeared from the top end of ladder due to the increased hostility.

We wouldn’t have as much of an issue if Paladin had a compelling deck to play instead, even if it was slightly worse, but this option isn’t really there.

Warlock is nearing Shaman status. There isn’t a single Warlock deck with a positive win rate or a play rate that exceeds 2% above rank 4. All of its archetypes range from “sucks” to “kinda sucks”. There are no signs of recovery from this. Never lucky, Gul’dan.

After suffering from setbacks in the last few weeks, Druid is now poised for a comeback. Quest Druid is beginning to take advantage of the meta heavily fixating on Galakrond decks.

Of course, this is all a part of what’s developing to be a cyclical meta, in which:

Druid rises to counter Warrior & Rogue, followed by an uptick in Mage, which counters Druid

Hunter rises again to beat down on Druid and Mage

Remember this cycle, and you’ll likely stay one step ahead of the meta.

Our Data Reaper Project, including the Data Reaper Live has 2,300 active contributors. Without them, this project would not be possible, so we’d like to thank all of our contributors for their help.