Welcome to the 175th edition of the Data Reaper Report! 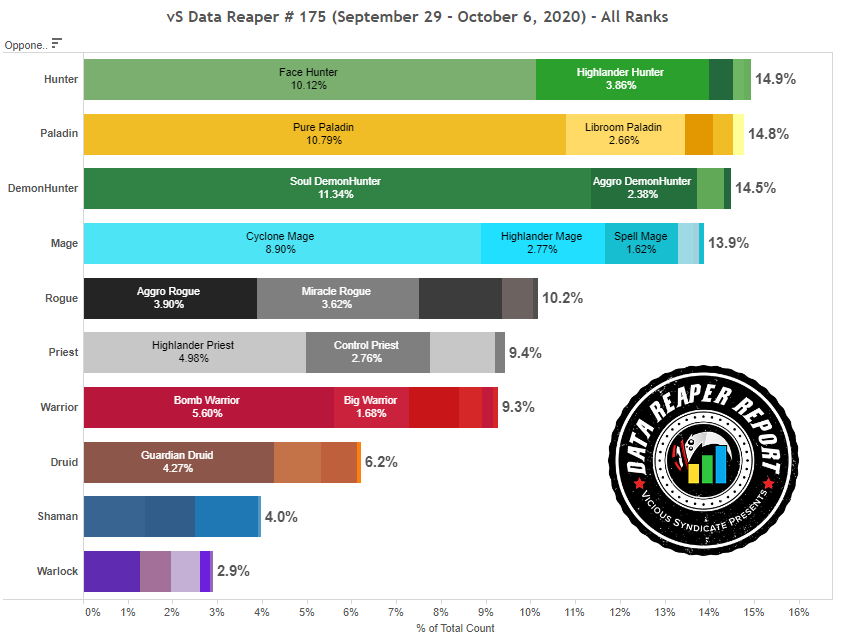 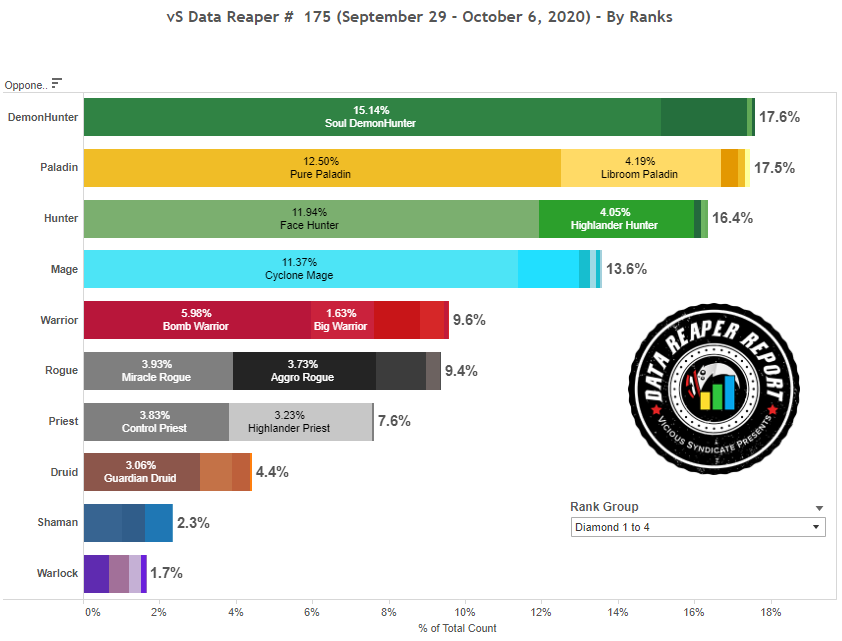 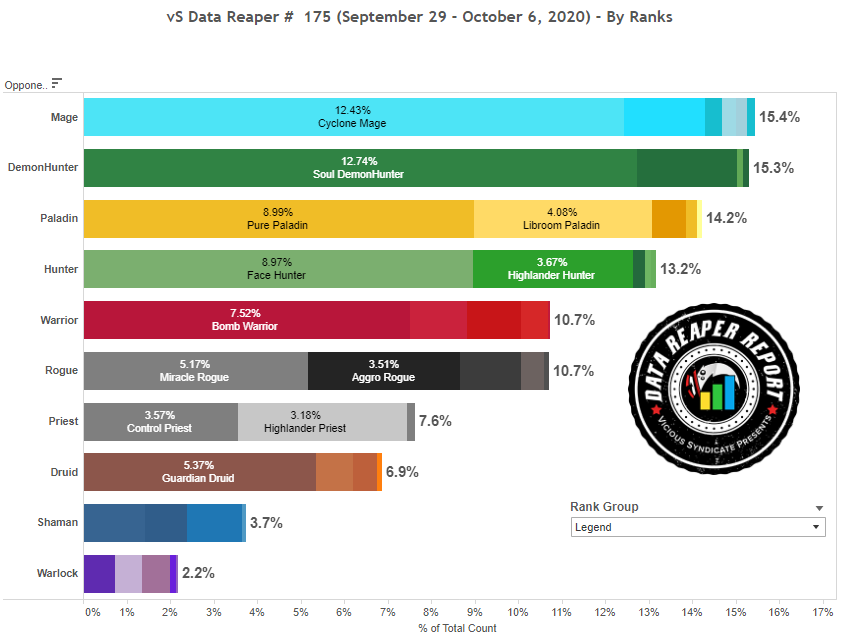 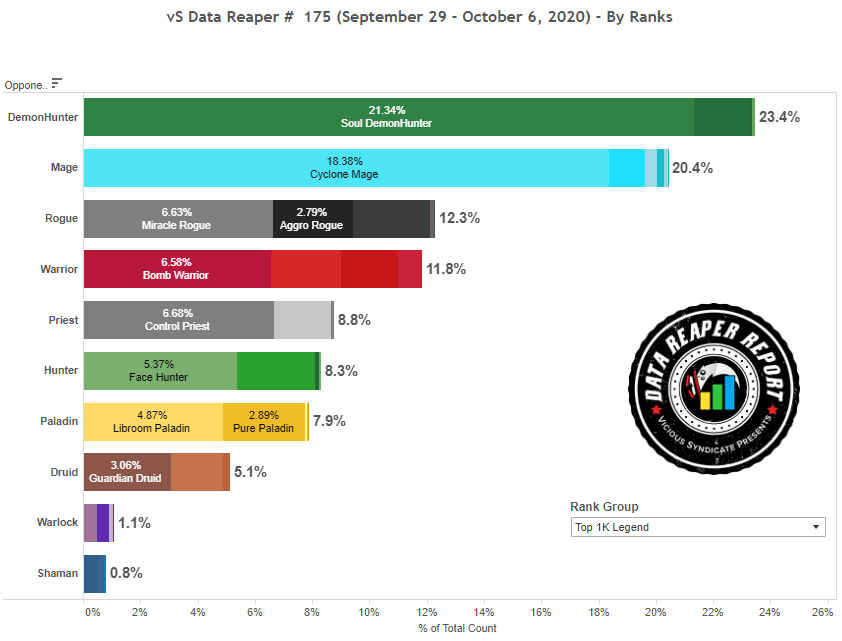 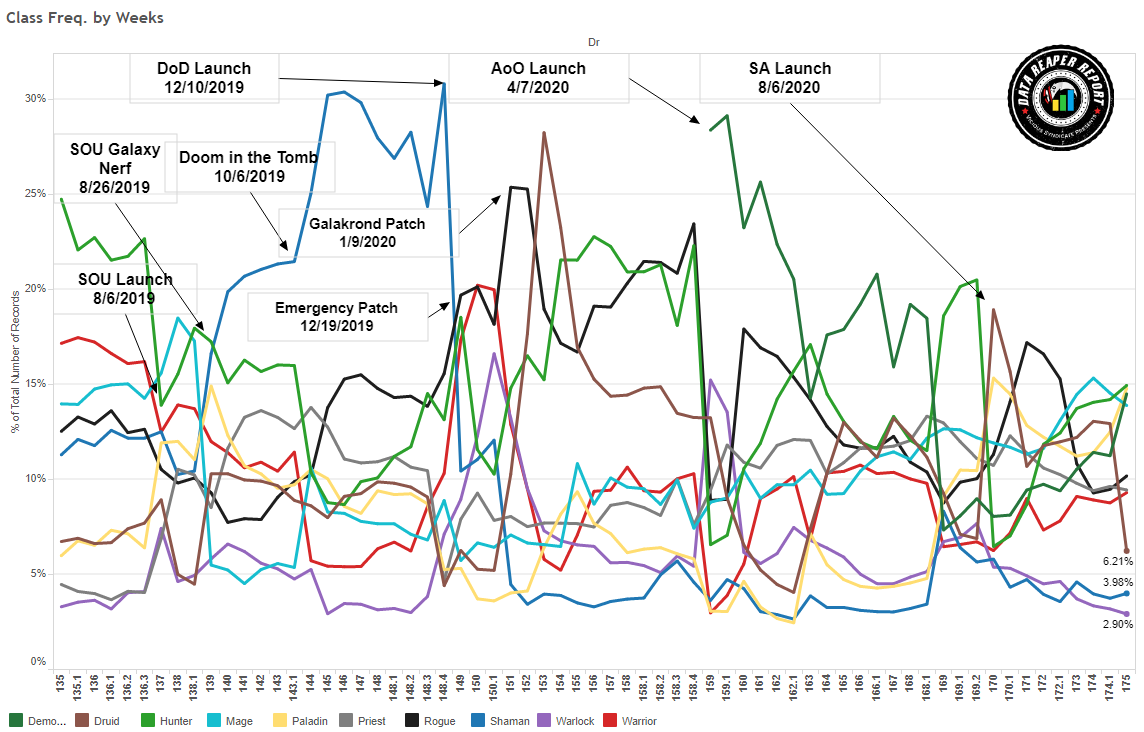 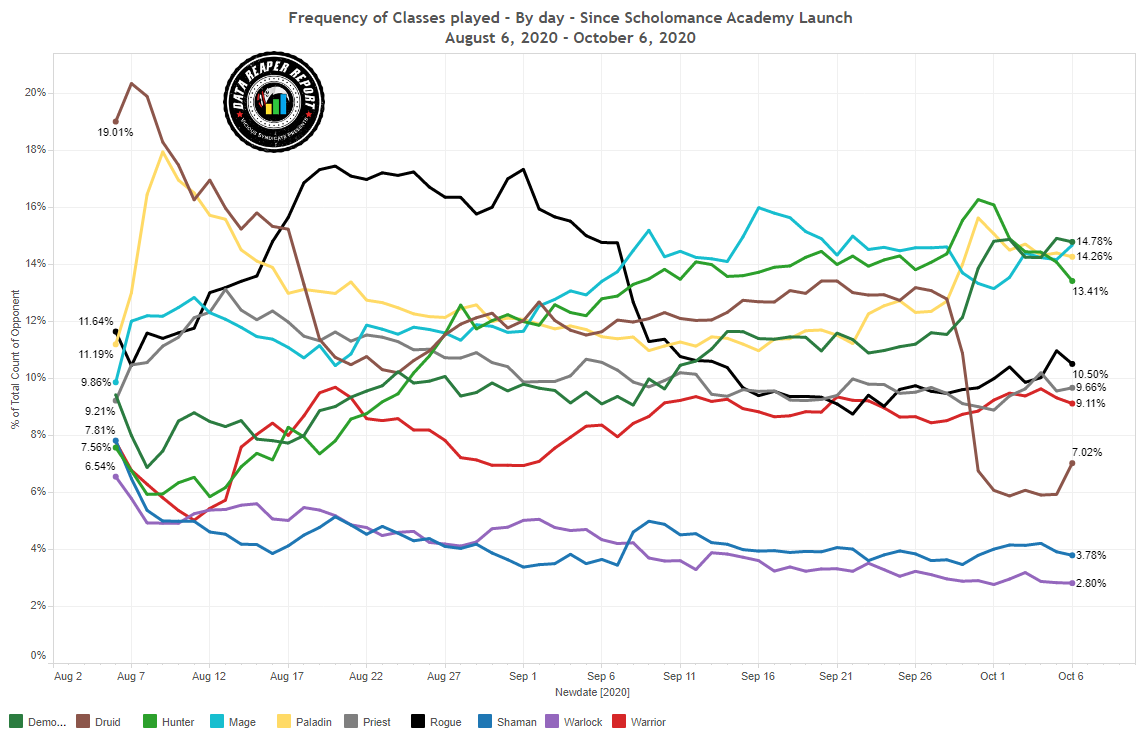 The balance changes’ biggest impact is the fall of Druid. The class has collapsed in play throughout ladder, with Guardian Druid on a persistent decline that’s still ongoing. Interestingly, Quest Druid has popped up at top legend and is seeing some experimentation.

Soul Demon Hunter was most likely to benefit from the decline of one of its toughest matchups, and the deck has spiked in play, especially at top legend where it has surpassed 20% of the field. It has seen an incredible amount of success at higher levels towards the end of September.

Turtle Mage has been deleted, while Cyclone Mage remains one of the most popular decks in the format following the balance changes. It is only second to Soul DH at top legend, where it is nearing a 20% play rate.

Rogue has had a quiet week in which it seems to have maintained its presence. Miracle Rogue is more prominent at higher ranks, while Aggro Rogue is more noticeable at lower ranks. Galakrond Rogue is seeing experimentation at top legend, signaling a potential return to the format.

Bomb Warrior is a similar deck to Soul Demon Hunter, so when the latter receives so much attention, the former is seeing less play. The more interesting news is that the Warrior class is finally giving other archetypes a second chance, with both Enrage and Control Warrior being extensively tested at higher levels.

Priest has seen a small uptick in play. Highlander Priest remains fairly popular at lower ranks, but Control Priest is the deck of choice at top legend. This trend has already begun before the patch, but it appears to be accelerating now.

Hunter seems to be unaffected by the balance changes and continues an internal shift that we’ve identified a couple of weeks ago. More attention is given to the new Face variant of Highlander Hunter, which has looked fairly promising at initial glance and it’ll be interesting to see whether it stands the test of time.

While Paladin has always been extremely popular on the climb to legend, the class is finally getting some respect at top legend, where its play rate has risen to around the 8% mark. Libroom Paladin is now fairly noticeable throughout ladder and has established itself as a competitive meta deck that is favored over Pure Paladin amongst high-level players.

Shaman and Warlock haven’t seen any interesting developments, and both classes remain non-existent at top legend. Totem Shaman and Zoo Warlock are the most common choices within these classes, but neither deck has gained any ground following the patch. 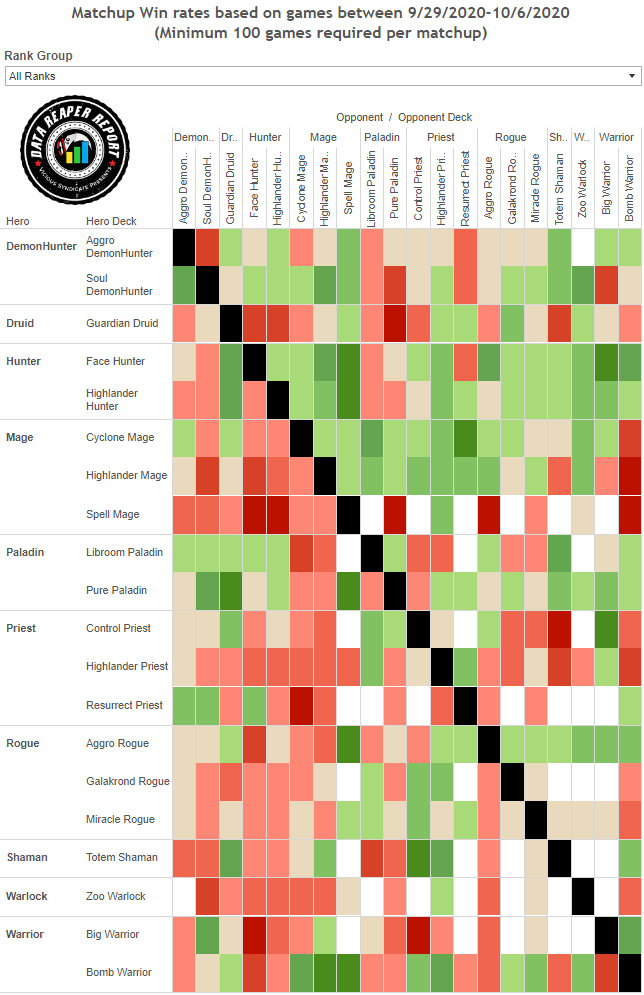 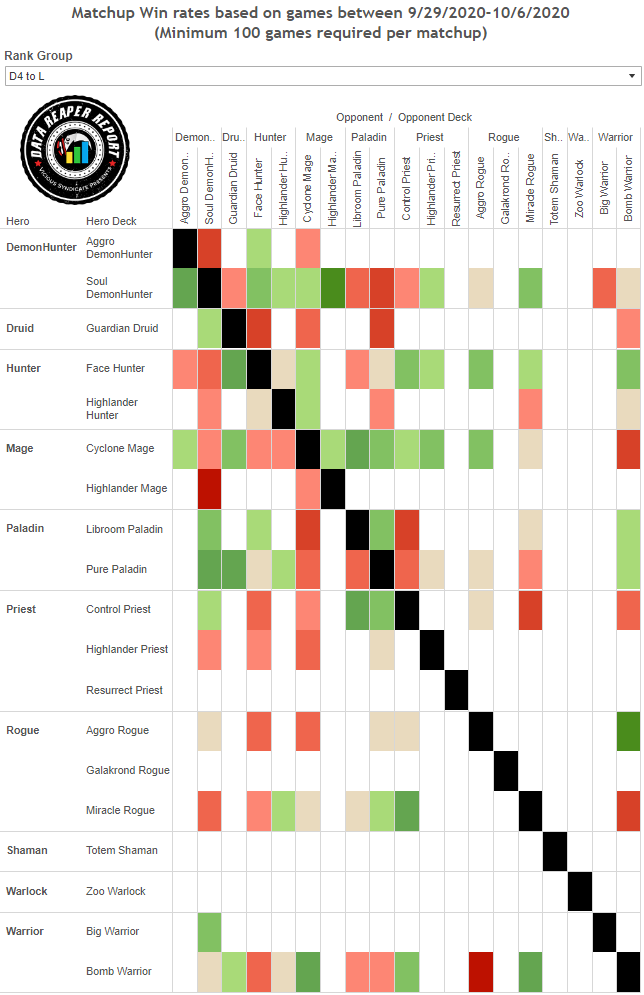 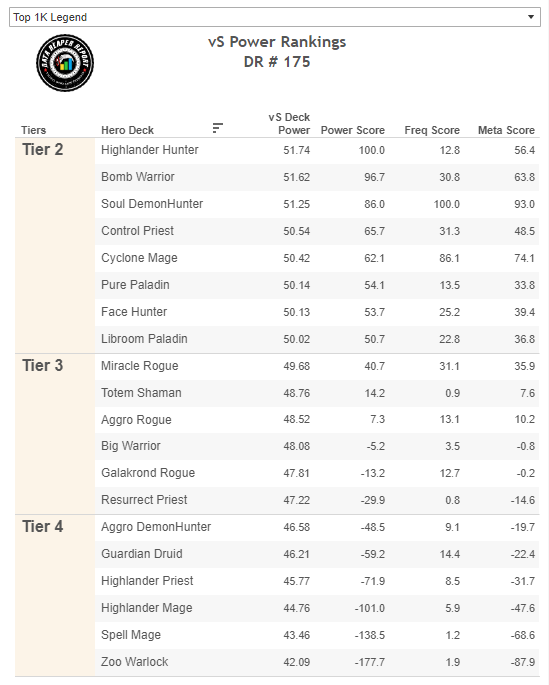 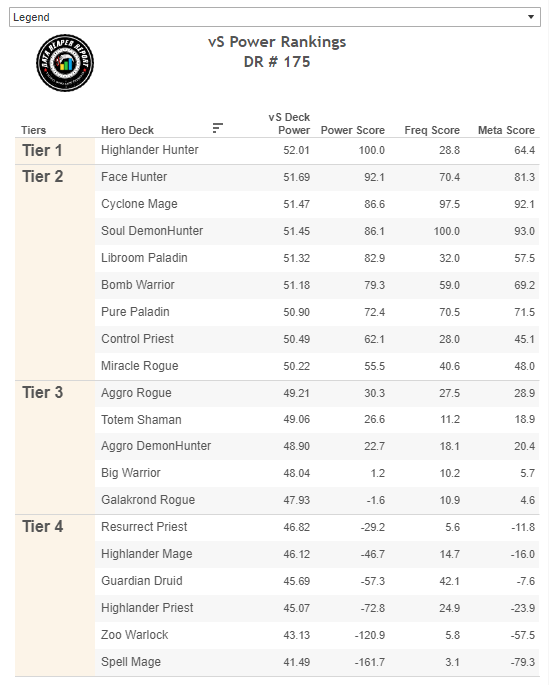 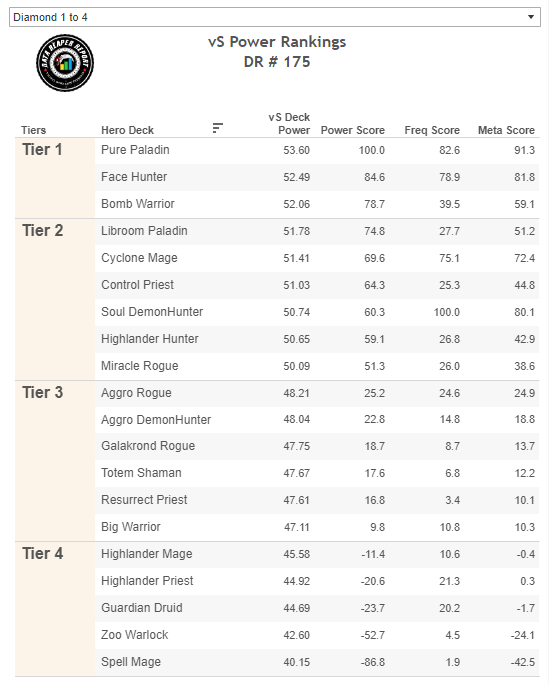 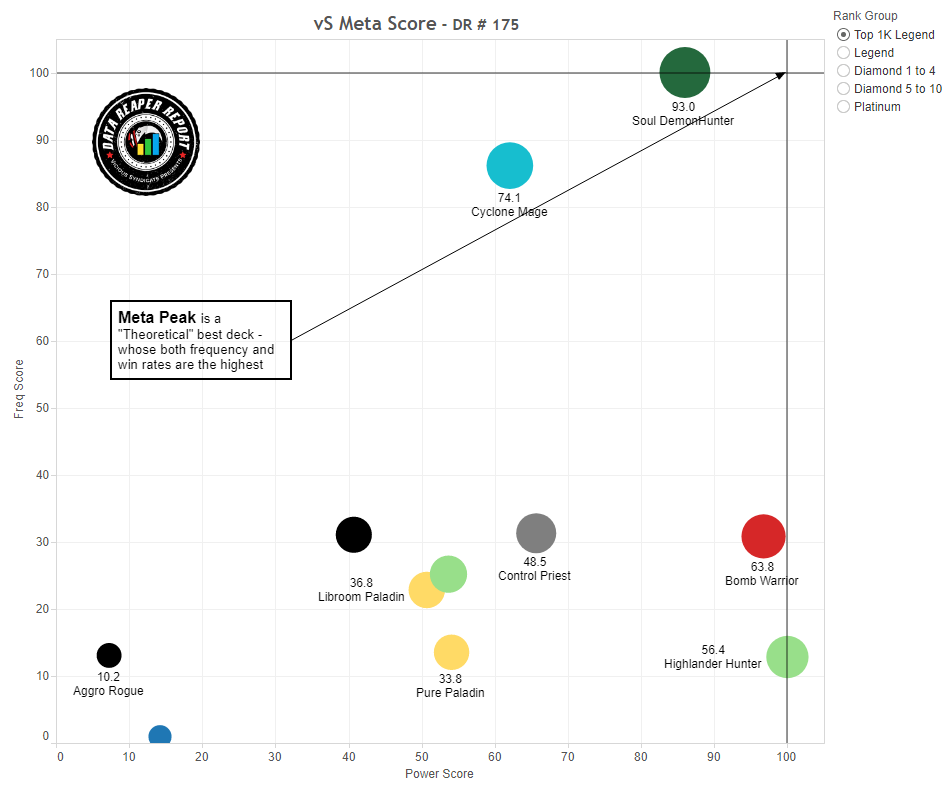 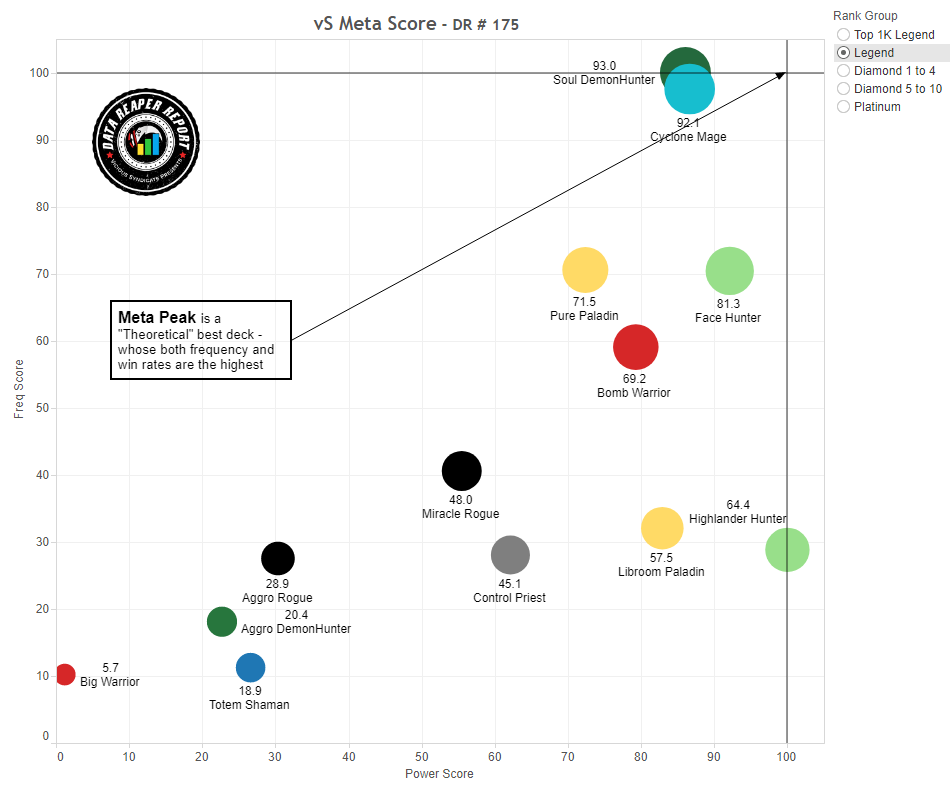 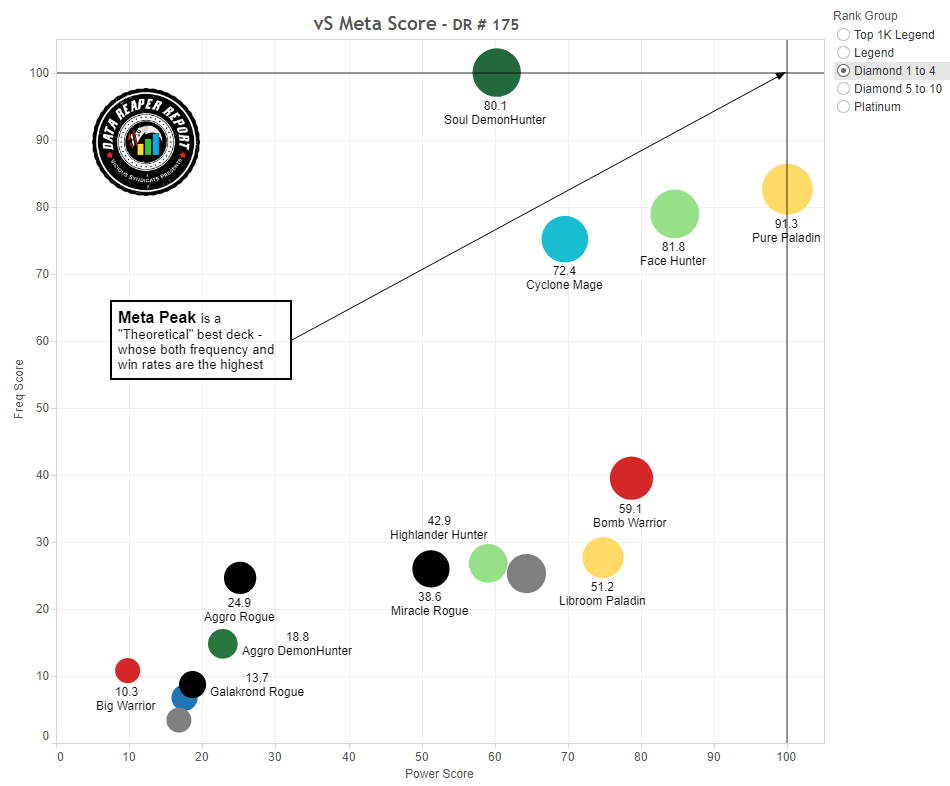 Once again, nothing seems to be out of line when it comes to power level in Scholomance Academy. It’s another week in which win rates at higher levels of play are incredibly flat and plenty of classes are viable and competitive. However, “dead classes” might be an issue resulting from a couple of high impact nerfs. Shaman, Warlock, and now Druid just don’t look relevant anymore.

Soul Demon Hunter was a big winner of the balance changes, as it has seen one of its main counters deleted from the format. In the absence of Druid and the rise of its own popularity, Soul DH now looks to become more effective in the mirror, something it hasn’t really focused on before.

Hoard Pillager is a card that we were not fond of before as re-equipping Aldrachi Warblades was rarely worth it (for Pillager to be good, you need to be happy with this outcome, not just Marrowslicer). The mirror is a different story. In this matchup, lifestealing is extremely important as both players often find themselves racing for lethal and the health swing can be massive, so Hoard Pillager’s value has gone up.

Cyclone Mage is enjoying the disappearance of Druid and has seen an improvement in its performance as a result. With the new patch, we’ve also seen the Dragon build break away and become the better choice. It generally has a stronger late game and the meta is becoming more focused on sustainability, while cards such as Devolving Missiles and Firebrand are less important to include. One change we would now make is to include Jandice over a Violet Spellwing, since it’s a strong card against Soul Demon Hunter.

Rogue is in a similar position to where it was before the balance changes, when it was competitive but not outstanding.

The Vendetta variant of Miracle Rogue has looked better this week thanks to the inclusion of Underbelly Fence over Cult Neophyte. The 2-drop has helped justify the thief package since we have another strong payoff for it. Even Dragon’s Hoard, a card that has consistently looked terrible for the last two months, might be worth it as a single copy. The Vendetta variant doesn’t have much flexibility in its secret options, with double Plagiarize highly encouraged. Both variants have similar matchup spreads.

Aggro Rogue is being pushed in the direction of the Stealth Dancer build thanks to the rise of Soul Demon Hunter and fall of Druid. This variant has two important things that are required for more success in the DH matchup: sustainable off-board damage thanks to Self-Sharpening Sword, and beefier minions thanks to Steeldancer. As of this week, the Dancer variant is the way to go.

Galakrond Rogue is attempting to make a return, as it was previously very limited by the pace and power of Druid. A vanilla build that omits secret or stealth packages looks the most promising, with Polkelt proving to be an extremely important late-game piece. With no Druids around, Questing Adventurers aren’t as important, with Faceless Corruptors offering strong removal and board swings instead.

The balance changes and the death of Druid may lead to the diversification of the Warrior class. While Bomb Warrior is enjoying ongoing success with a fairly established build, two archetypes are attempting to make their return to the format.

Control Warrior has emerged as a strong counter to Soul Demon Hunter thanks to its armor gain, which also makes it very effective against burn decks in general (Face Hunter, Bomb Warrior, Aggro Rogue). Its late game plan involves copying Rattlegore or Kargath with Bloodsworn Mercenaries, which also serves an important role in faster matchups alongside Armorsmiths. We’re featuring BZRK’s list, which we found to be optimally built.

The archetype’s issue mostly comes down to its Priest matchup, which is utterly horrible (15-85). This might prevent Control Warrior from being more than a fringe ladder deck since it’s so easy to counter.

Enrage Warrior was initially pushed out of the format due to the rise of Druid, and Malfurion’s fall may see it come back. Its two variants look evenly matched. Running double Kor’kron alongside Rampage and Lord Barov helps you in slower matchups. The Egg/Teron build is stronger against faster decks, such as Face Hunter and Soul Demon Hunter.

Control Priest seems to be transitioning into running more removal, which might be a result of Druid’s decline. Cards such as Shadow Word: Death and Holy Smite are helpful against Mage, Rogue and Demon Hunter, and work better with Sethekk Veilweaver. The increased importance of removal pushes out the Galakrond package, with Veilweaver helping us find late-game value instead.

Highlander Priest just seems to be strictly worse in every way to Control Priest, and the archetype continues in its pre-patch direction, which is fading away from the format and mostly settling at lower ranks where players are less informed about its flaws. The current best direction for the archetype, if you insist on it, is getting greedier with its late-game options, as exhibited by the featured build.

In theory, Hunter should be discouraged by the rise of Soul Demon Hunter, but the class is doing more than fine. Both Face Hunter and Highlander Face Hunter are thriving off other matchups while still displaying some capability of improving their difficult matchup.

Highlander Hunter has fully embraced the Face build, and it continues to perform very well. The deck has a better matchup against Demon Hunter due to its strong finishing potential through Dinotamer Brann and Zephrys. One card we’re interested in again is Toxic Reinforcements, replacing Pressure Plate in the featured build. It offers us another mid-game finisher, and Soul Demon Hunter might be the one matchup where you’d want to play the side quest on turn 1.

Paladin still looks pretty strong throughout ladder, and both of its established options can look to tweak their builds in the new meta.

In a meta that’s dictated by Soul Demon Hunters, you’re generally dissuaded from running early game minions and want “taller” threats that don’t die to their AOE easily. This is why we’ve seen the value of Shotbots in Pure Paladin drop, and we’d rather run Murgur (for the better late game 2-drop) and the 2nd Blessing of Authority. Authority/Braggart is a very powerful combo that can be difficult to deal with for the Demon Hunter, since their single copy of Consume Magic is usually not a good enough answer to it. They have to be lucky with their Wandmakers.

Libroom Paladin’s late game issue might simply be alleviated with more draw consistency. We’ve seen a rise in popularity of Novice Engineer, and the card looks pretty good alongside Salhet’s Pride as long as you don’t make the mistake of keeping it in the mulligan. In general, keeping card draw is not a good decision in this deck because you’d rather find cards that further your actual game plan. Think of it like this: throwing away a Loot Hoarder or a Novice Engineer is essentially cycling them for 0 mana instead of 2. You can consider keeping Salhet’s Pride with a strong enough hand.

Nerfing Druid wasn’t really what Totem Shaman wanted out of balance changes, as it is one of the matchups that the deck thrived off. Unfortunately, it looks like the meta will only become more hostile to Shaman as Druid fades away, which doesn’t bode well for its already lukewarm performance against the field.

We don’t anticipate any Shaman deck finding relevance in the near future.

Warlock is still largely unplayable. Zoo Warlock’s performance continues to look atrocious, which isn’t surprising considering it hasn’t received any buffs and the meta hasn’t become more favorable to it. Once again, there’s not much to talk about here. 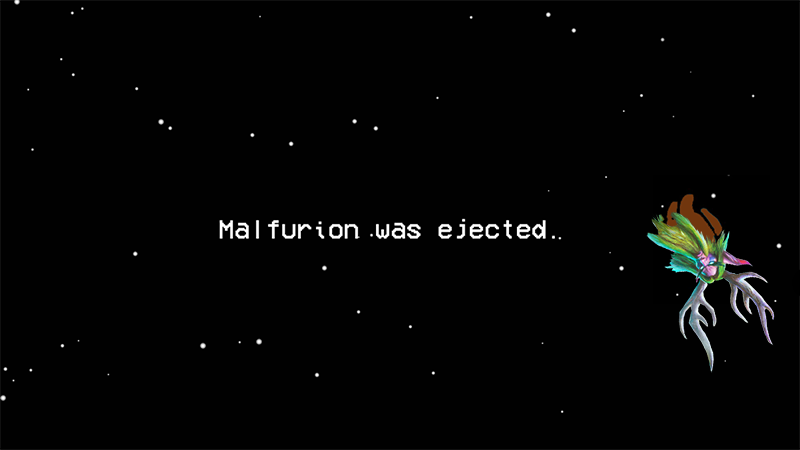 We were very close to picking Highlander Face Hunter to be the Meta Breaker for report #174. Its ability to contest Soul Demon Hunter more effectively has prevented it from losing momentum following the balance changes, and it now looks even stronger than Face Hunter at higher levels of play.

With many different decks having success in the current meta, Highlander Hunter might be flying under the radar. It’s time to give this one more attention.