Welcome to the 197th edition of the Data Reaper Report! 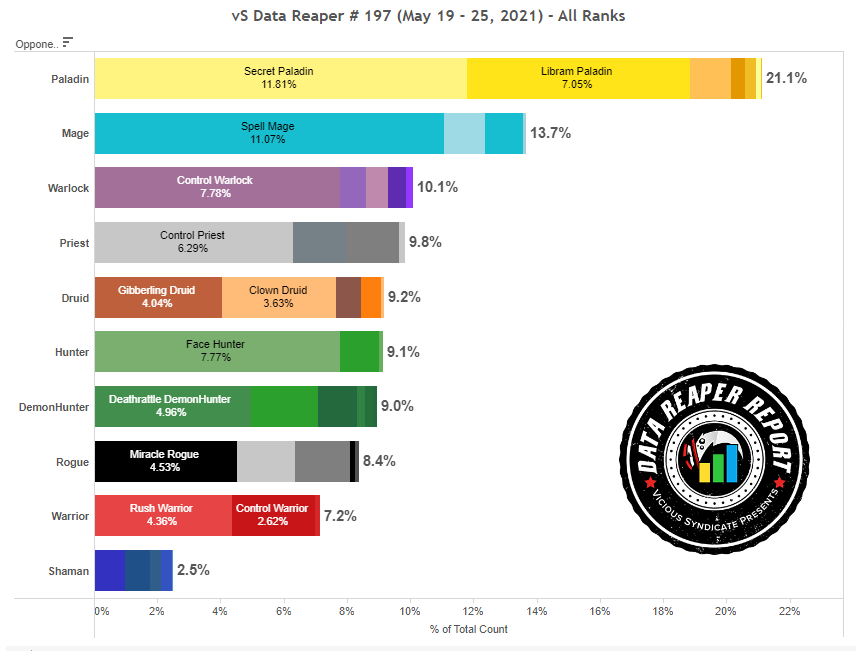 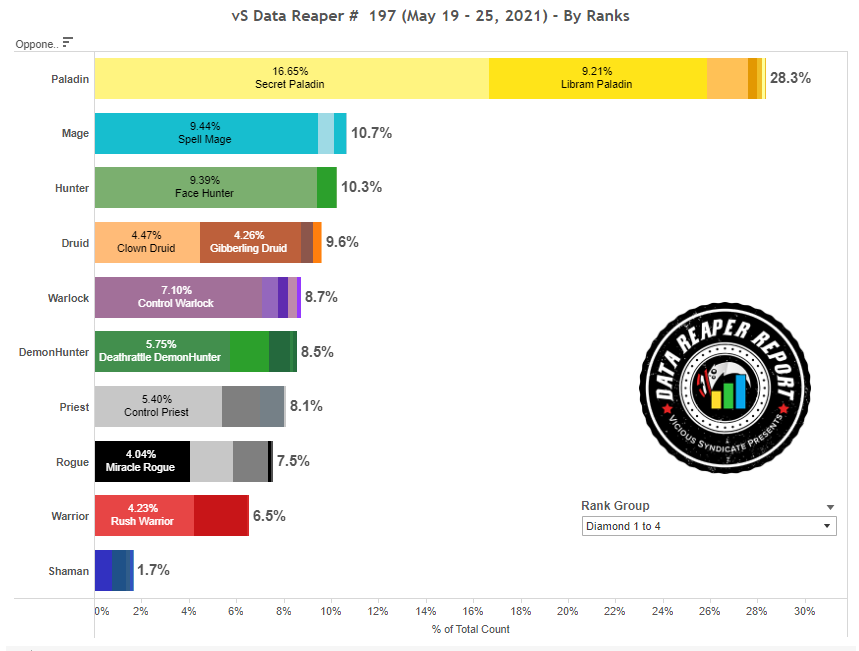 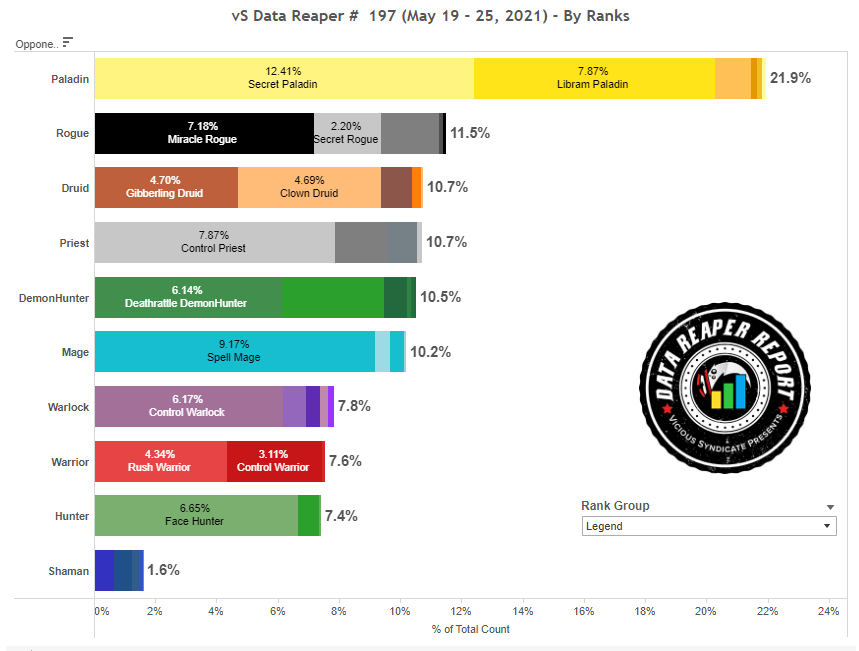 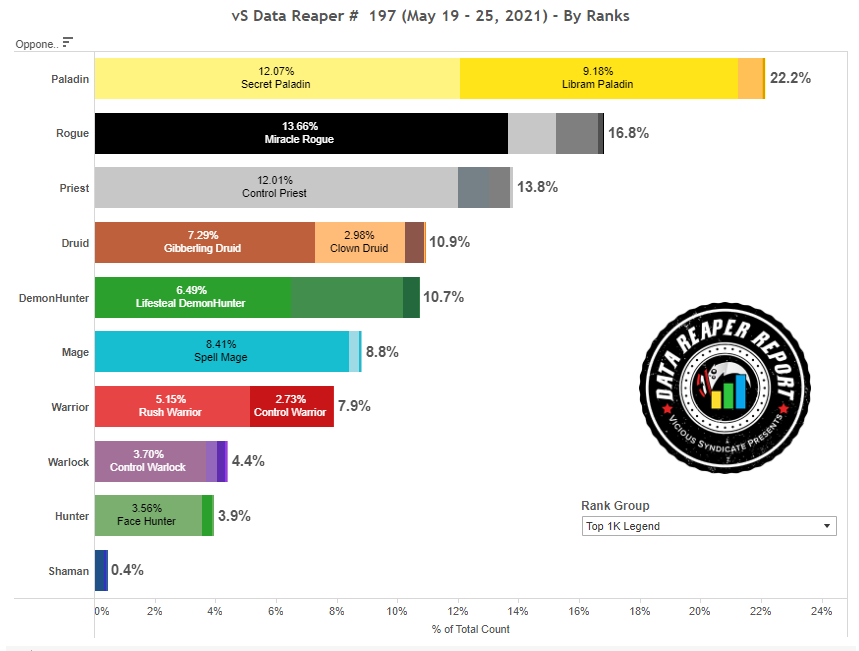 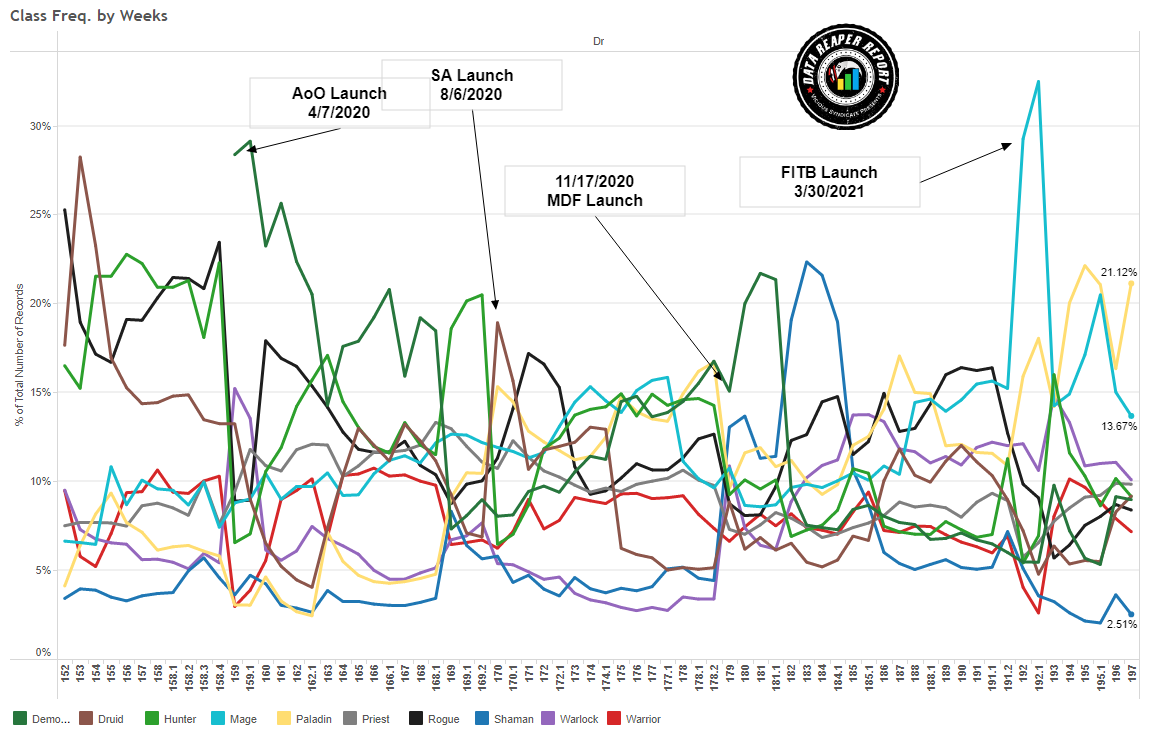 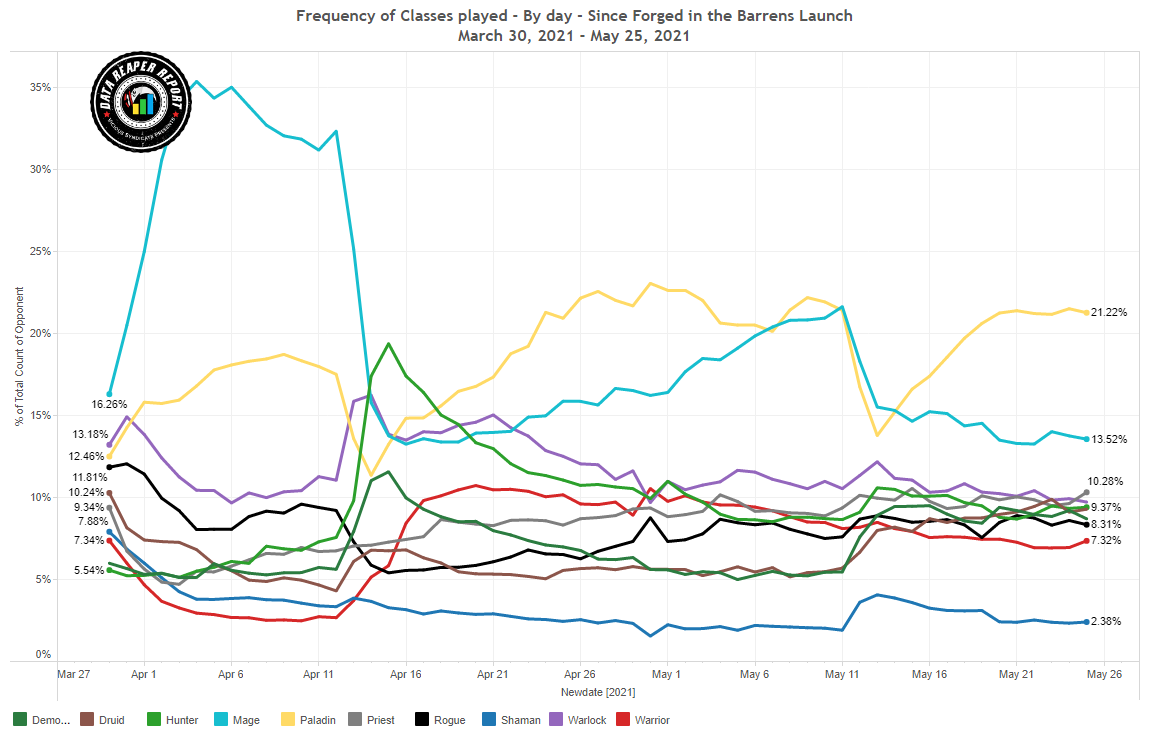 Order is being restored, and we’re once again entering full-blown Paladinstone. The class has risen to become the most popular class at all levels of play. Its numbers at the high Diamond bracket are alarming. Its increase in popularity at top legend is dramatic, where Secret Paladin tripled its play rate over the last week. The N’Zoth variant has gained a lot of traction.

Miracle Rogue is holding firm at higher levels of play, but Poison Rogue seems to be crashing under the weight of Paladins. The deck has significantly shrunk in its presence. Secret Rogue maintains a small presence even though it’s known to perform well against the rising Paladins.

Control Priest is going through an internal shift, one of the few we can observe in the current field. A N’Zoth variant has picked up a lot of play and is competing with the Flesh Giant variant. Other Priest decks remain fringe.

Druid is picking up some steam, especially Clown Druid following the realization that the deck is far better positioned after the balance changes.

Demon Hunter is settling down behind its two primary archetypes, but both of them are experiencing changes. Deathrattle DH is still deep into a refinement phase meant to sort out some flaws in its strategy, while Lifesteal DH is exploring a deathrattle package with Blackthorn at its top end.

Spell Mage is gradually declining, as players realize that the Spring Water nerf hit it harder than it initially seemed. The deck’s popularity pattern is beginning to resemble that of Control Warlock.

Control Warlock is also declining, though you’re still going to run into this deck more often than you should. Hunter is settled down and looks fairly stagnant. Shaman is still gone. 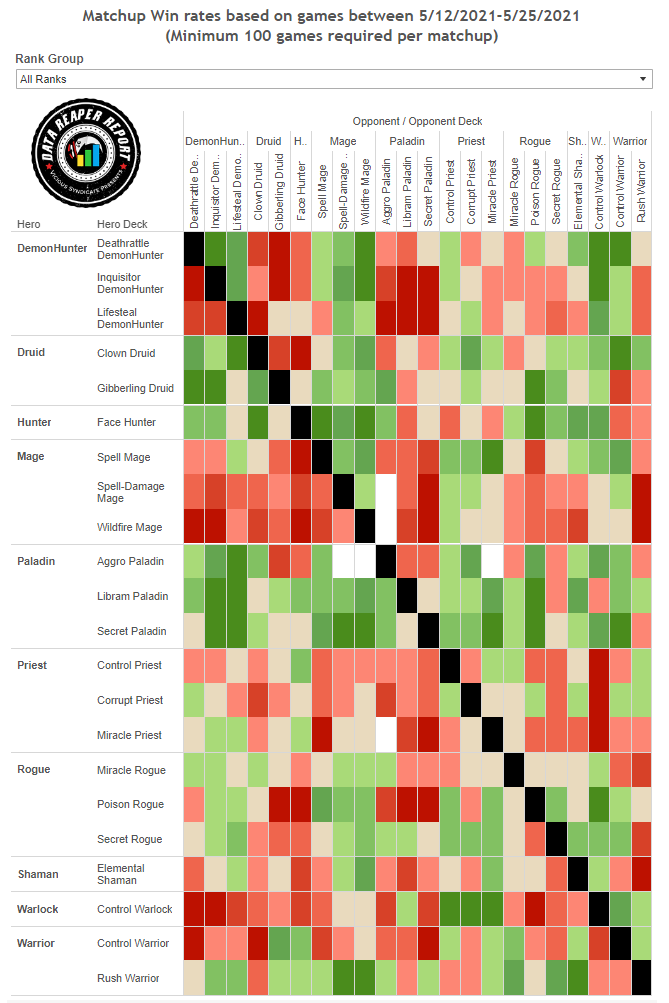 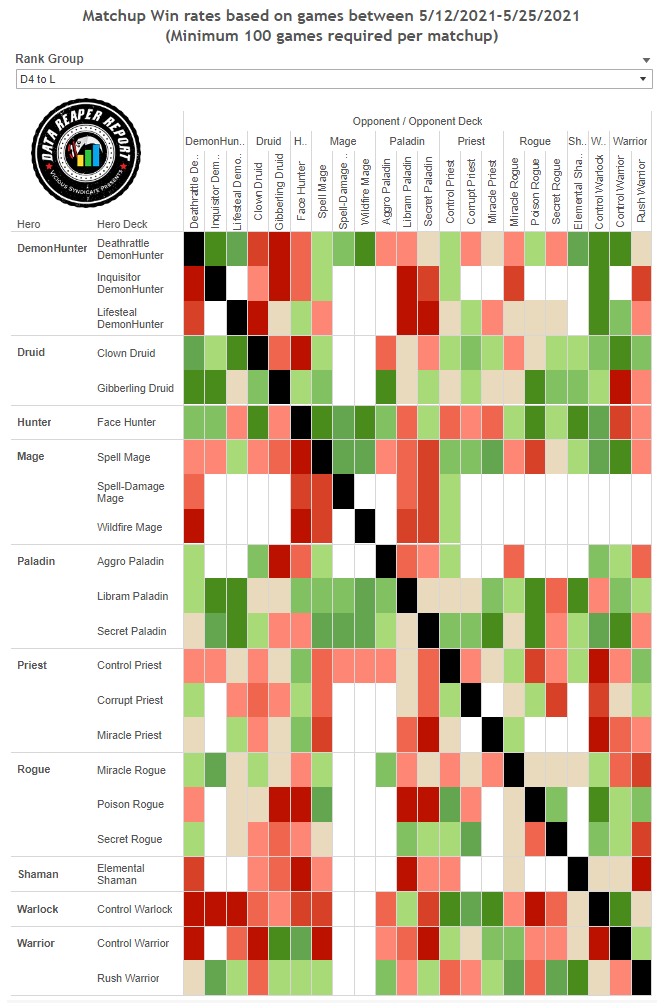 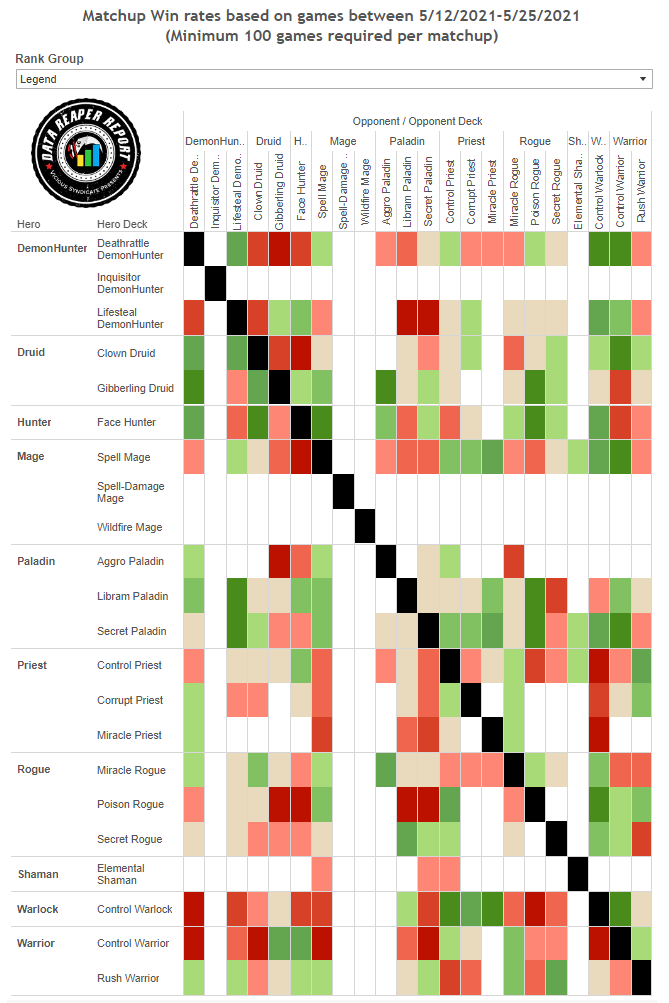 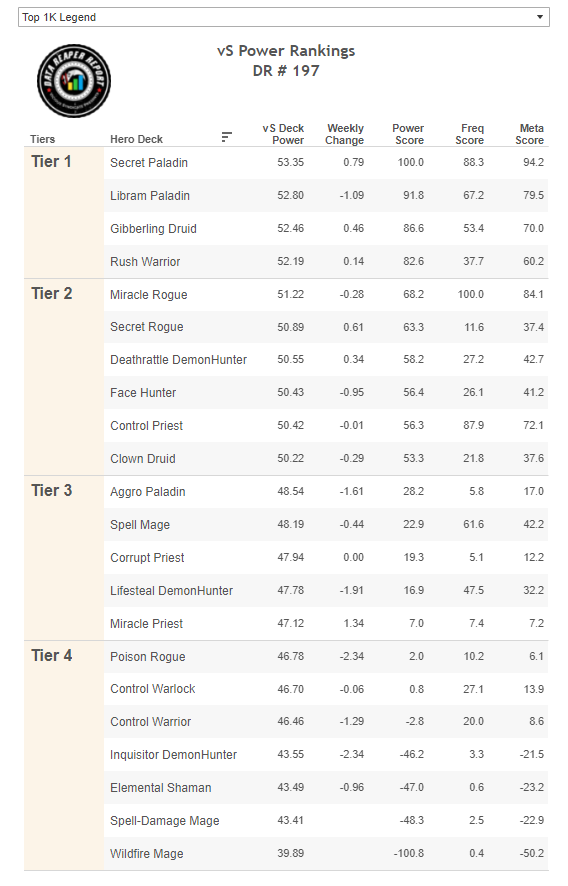 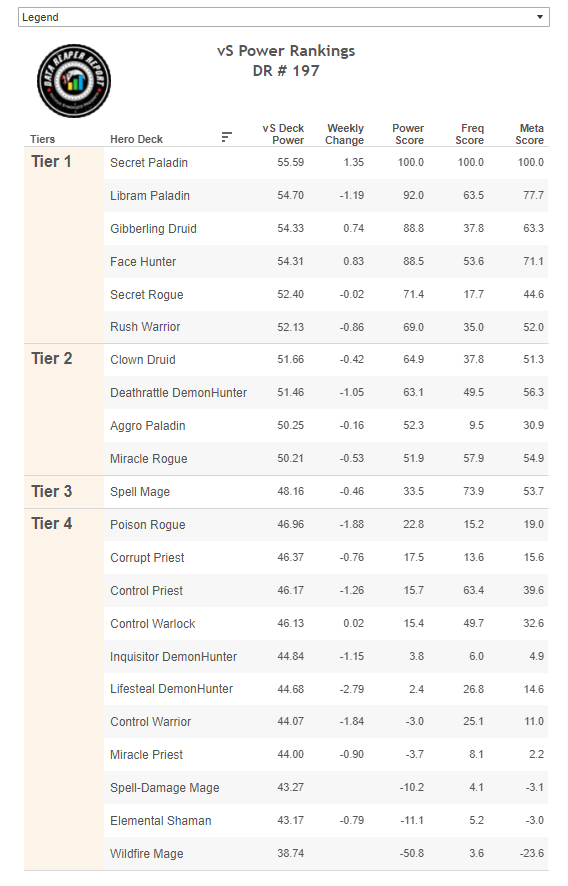 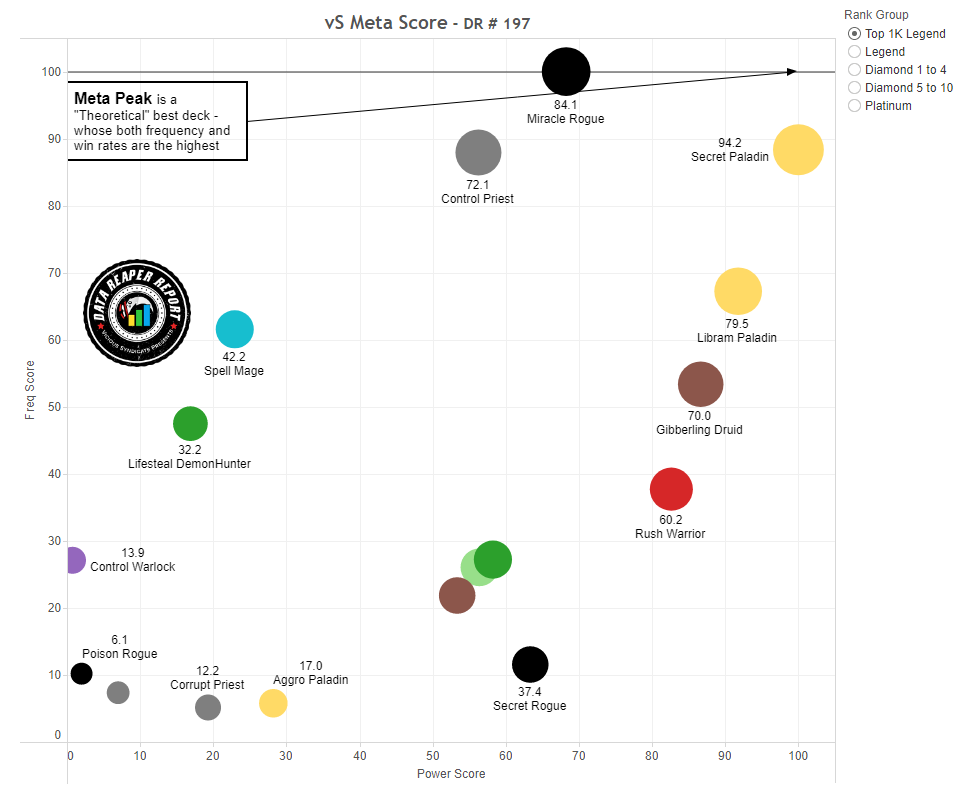 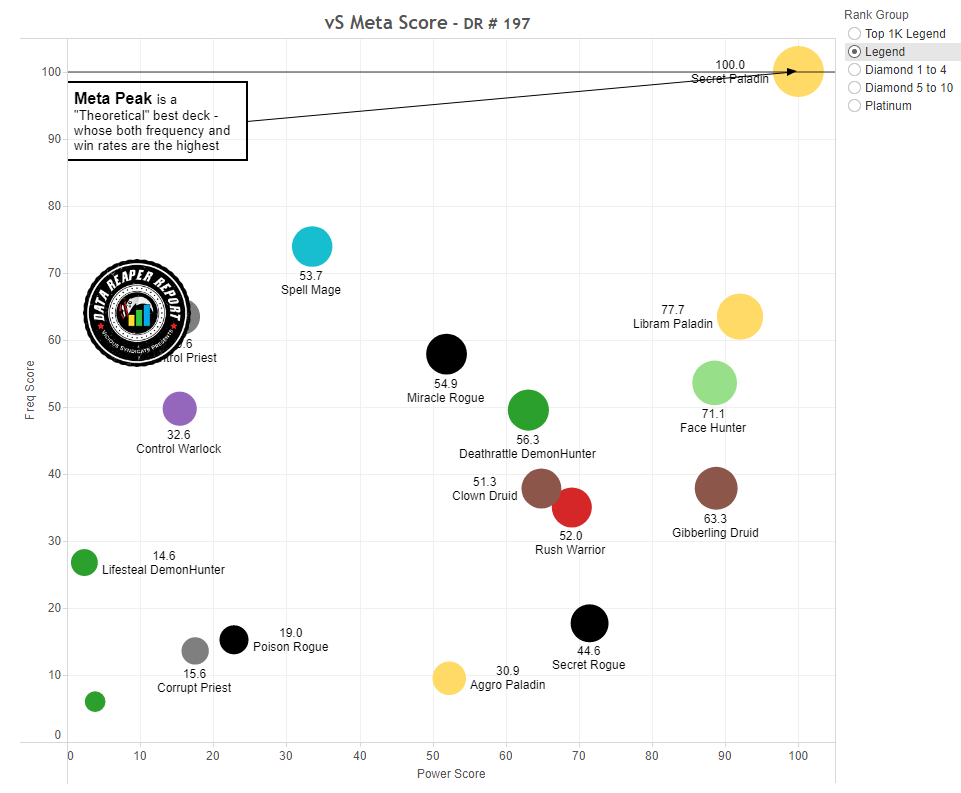 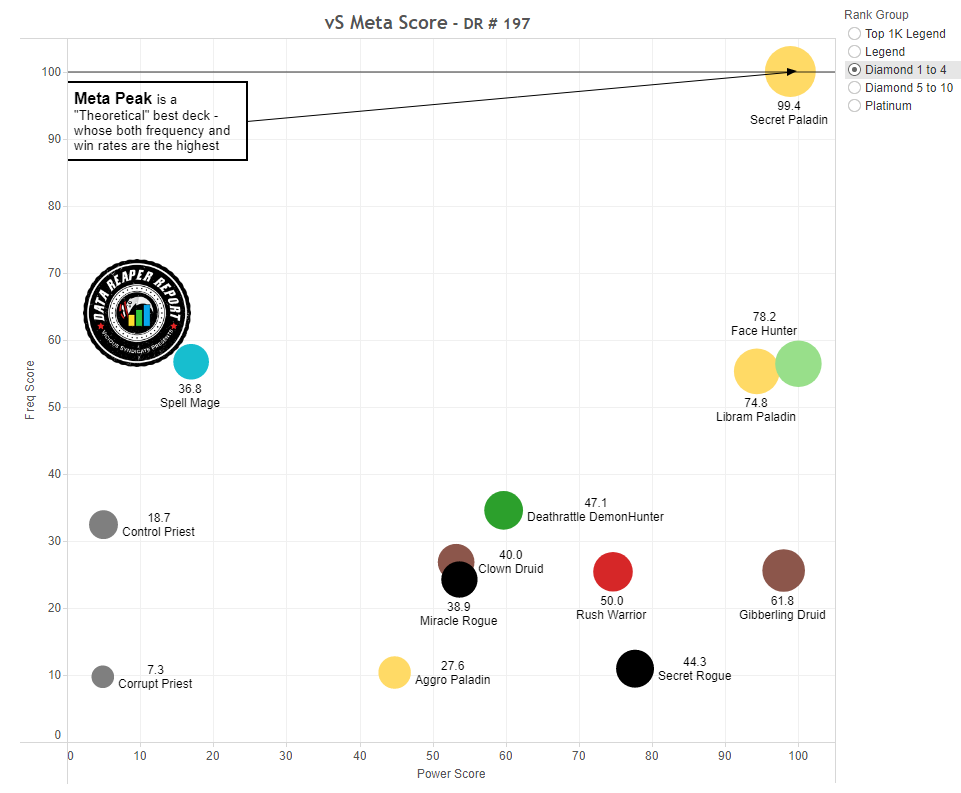 Paladin is a different class compared to how it was before the balance changes, and the meta is certainly healthier from a diversity standpoint. But what hasn’t changed is how dominant Paladin is. It strikes us as a watered-down version of Demon Hunter in Ashes of Outland: taking repeated nerfs yet making a few adjustments that keep it constantly at the top of the meta.

What’s particularly concerning is that both Libram and Secret Paladin still exhibit a significant scope for improvement compared to other decks in the field, since most of them have been solved (Priest and Demon Hunter are the classes seeing the most interesting development this week). The N’Zoth variant of Secret Paladin can make one additional adjustment that boosts its power further, while Libram Paladin can take a similar step towards perfection. Don’t expect these decks to naturally fall off, which means there is once again no way out of this situation unless balance changes, new cards, or a combination of both arrive. Thankfully, we think those things are likely to arrive next week.

The meta is becoming heavily influenced by Paladin due to its rise in play, and most of the changes in the power levels of some decks are a product of their performance against Paladin. Struggling against the class? You’re in trouble (Examples: Poison Rogue, Lifesteal DH). Is your matchup against Paladin reasonable? You’re probably sitting in the top half of the table. That’s pretty much the story of the current meta.

Paladin’s resilience to multiple balance changes has been impressive, and it seems like its primary archetypes continue to find new ways to improve.

Libram Paladin began experimenting with adding Conviction while cutting Libram of Justice entirely. This seems to be a good move as it allows the deck to exert more pressure on its opponents while making Knight of Anointment a more proactively impactful card, and Libram of Justice doesn’t seem to be missed. Conviction also works well as a Samuro enabler.

Murgur is another card seeing more play recently, and once again proves to be a useful Taelan target, this time alongside Liadrin.

Our N’Zoth Secret Paladin build from last week has proven to be strong, with the Knight/Hand/Conviction package looking unsurprisingly powerful. One change we’re making is adding Animated Broomstick. We didn’t have a chance to look at this card in the last report’s database, but now that it has risen in play, it’s clearly very strong. It provides the deck with some comeback mechanics while synergizing extremely well with Conviction. We accommodate Brooms by reducing the dragon package, omitting the 2nd copies of Dragontamer and Sky Stalker.

The Standard pre-patch Secret Paladin variant is also very successful, but we estimate that Brooms put the N’Zoth variant further ahead in power.

No significant developments in Rogue.

Secret Rogue looks very powerful in a Paladin-focused meta, while Miracle Rogue edges it at higher levels of play due to its more balanced matchup spread and higher skill ceiling. Poison Rogue is faltering due to the rise of Paladin, finding itself struggling even at the top legend meta where it used to find more success.

The new N’Zoth variant of Control Priest has quickly propagated on ladder over the past week and proved its merit. It currently looks stronger than the Giants build by a fair margin. N’Zoth provides Priest with an intimidating late-game finisher that can close out many matchups, and building around N’Zoth is quite easy with cards we don’t mind running anyway.

Southsea Scoundrel is a very powerful card in slower matchups that is particularly invaluable in the mirror, while we all know how strong Lightshower Elemental is against faster decks or any deck that attempts to burn us out. Resurrecting these bodies alongside a Scorpid and whatever dragon we discover off Studies is more than enough to force the issue.

We’re also very impressed by the Corrupt Priest build we’ve featured last week. Carnival Clowns alongside Yogg-Saron are the real deal. This deck is greedier than Control Priest and is, therefore, weaker against faster decks, but its late-game power is substantial. Even the Control Warlock matchup is no longer a gimme and is around 35-65 in the Warlock’s favor.

Druid is in a pretty good spot, taking advantage of Paladin slowing down.

Gibberling Druid is able to punish many strategies that lack AOE or other tools to deal with Glowfly or Gibberling blowouts while forcing close matchups against the very best decks. This is why it’s established itself as a Tier 1 ladder deck in the post-patch meta.

Clown Druid is far more tolerant of Paladin matchups these days, and is able to punish opponents that give it too much time to set up its game plan. A bunch of value and big threats can’t compete with Clowns if they’re not fast enough to kill the Druid.

Demon Hunter is still seeing many developments in both of its primary archetypes.

Deathrattle Demon Hunter’s issue is well established. It’s a very slow and clunky deck that vomit stats to the board but doesn’t have great swing turns until much later in the game through Blackthorn and N’Zoth. But, when we’ve tried to reduce the threat density last week with the Bladed Lady build, we’ve hit into a wall of the rising Libram of Hope.

A new build seems to offset this deck’s flaws to some degree by running Trueaim Crescent. This weapon helps turn slow piles of stats into immediate removal in the form of pseudo-rush. Running more cards that contest early board also helps, such as Sneaky Delinquent and Kurtus Ashfallen. The featured build looks like the best direction for the archetype when attempting to maintain decent Paladin matchups without weakening the rest of the spread.

Lifesteal Demon Hunter is once again branching out into a “hybrid” variant, but this time it’s Blackthorn who makes an appearance alongside a small deathrattle package. This build currently looks stronger than the “standard” build on ladder and is very much worth exploring.

Mage is in a pretty rough spot. Spell Mage may still win some turn 2 Flow games that linger in your memory, but a large sample size cannot lie. Its matchup spread has gotten worse across the board and it looks plain mediocre in the aftermath of the Spring Water nerf. That 2% nudge in the deck’s overall win rate makes all the difference.

The class’ problem is that nothing else looks remotely competitive. Wildfire and Spell-Damage Mage are two of the worst decks in the format. Jaina needs some mini-set help.

Rush Warrior has one of the best matchup spreads around, with its biggest flaw being the Priest matchup. This prevents it from exhibiting the same kind of dominance that Paladin exhibits, though Warrior feels comfortable facing any Paladin deck.

Control Warrior is on the fringes of competitive ladder play. It’s close, and running the Rattlgore late-game package definitely helps the deck’s overall win rate, but it’s not quite there yet. We can see a new card or two turning it into a more serious contender.

With Paladin and other classes becoming greedier and more dense with threats, there’s a big incentive for Control Warlock to run more removal. Siphon Soul has become increasingly important against the current field. Of course, this doesn’t change the fact that the deck is still fairly weak and not recommended for climbing.

Warlock is in a pretty bad situation in which its other archetypes don’t look competitive either. It’s one of the classes that’s most desperate for an injection of good cards.

Face Hunter is pretty strong, which puts the class in a better spot than others since it has a deck that performs well throughout ladder. The class’s main issue is a lack of diversity. Other Hunter decks are very weak since there isn’t a depth of cards available to them. We’ll see if that changes after the miniset.

We were planning to provide some exciting new developments in the Shaman class this week. However, we realized that last week’s Shaman discussion had Overload (2). We’ll have to wait a couple of weeks for those mana crystals to unlock before we can write more abou-

Our meta-breaking wishlist for the mini-set.

Until then, play the yellow class.