Welcome to the 214th edition of the Data Reaper Report! This is the last report for United in Stormwind. 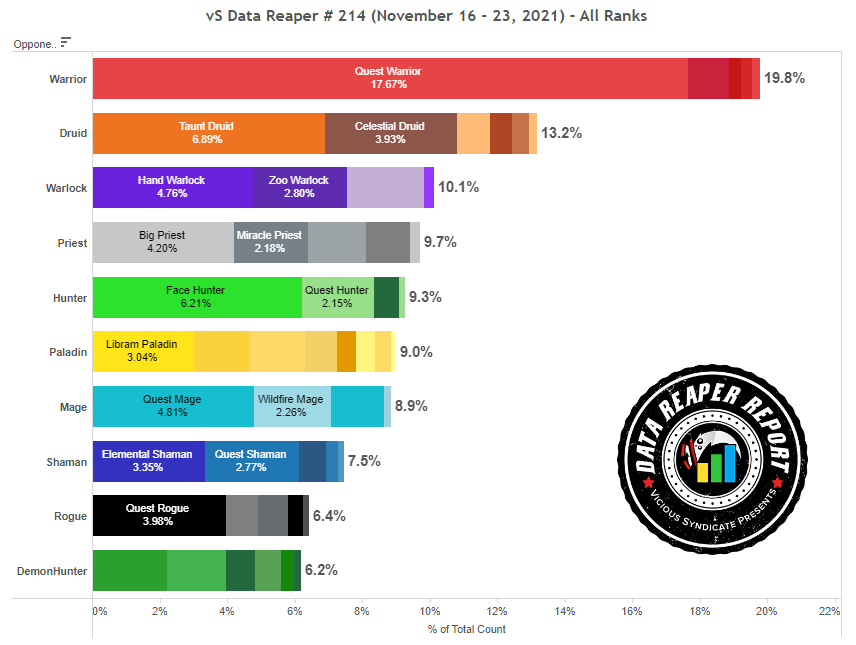 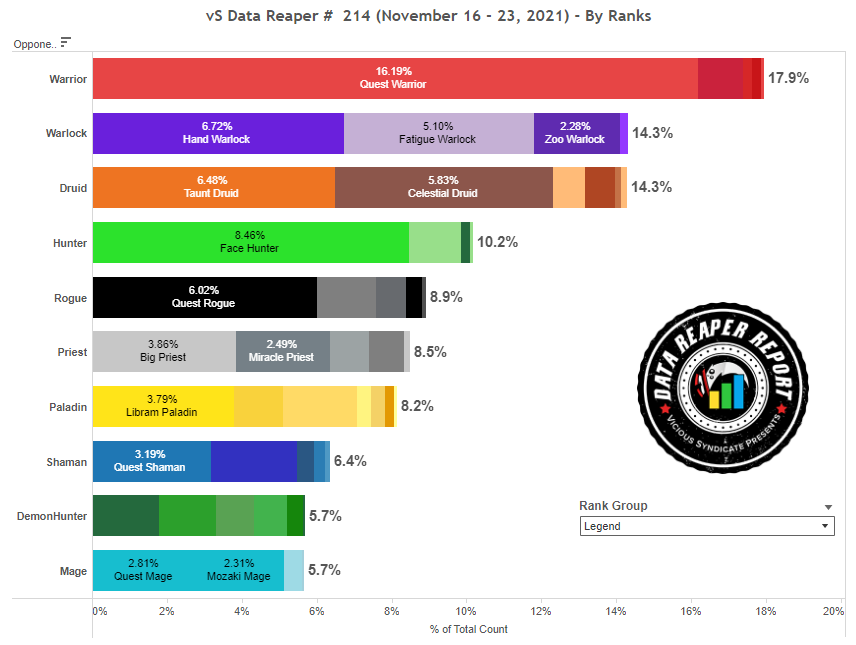 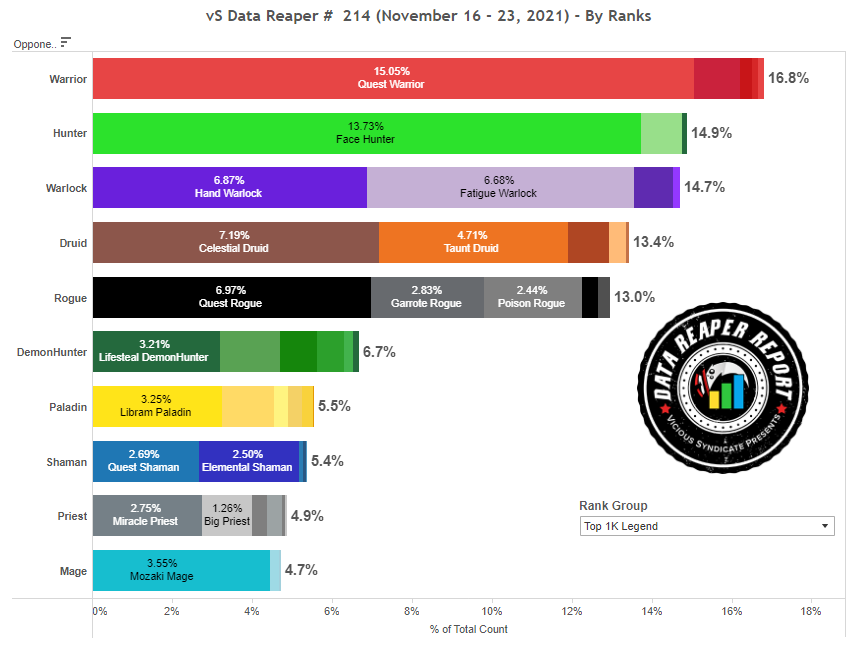 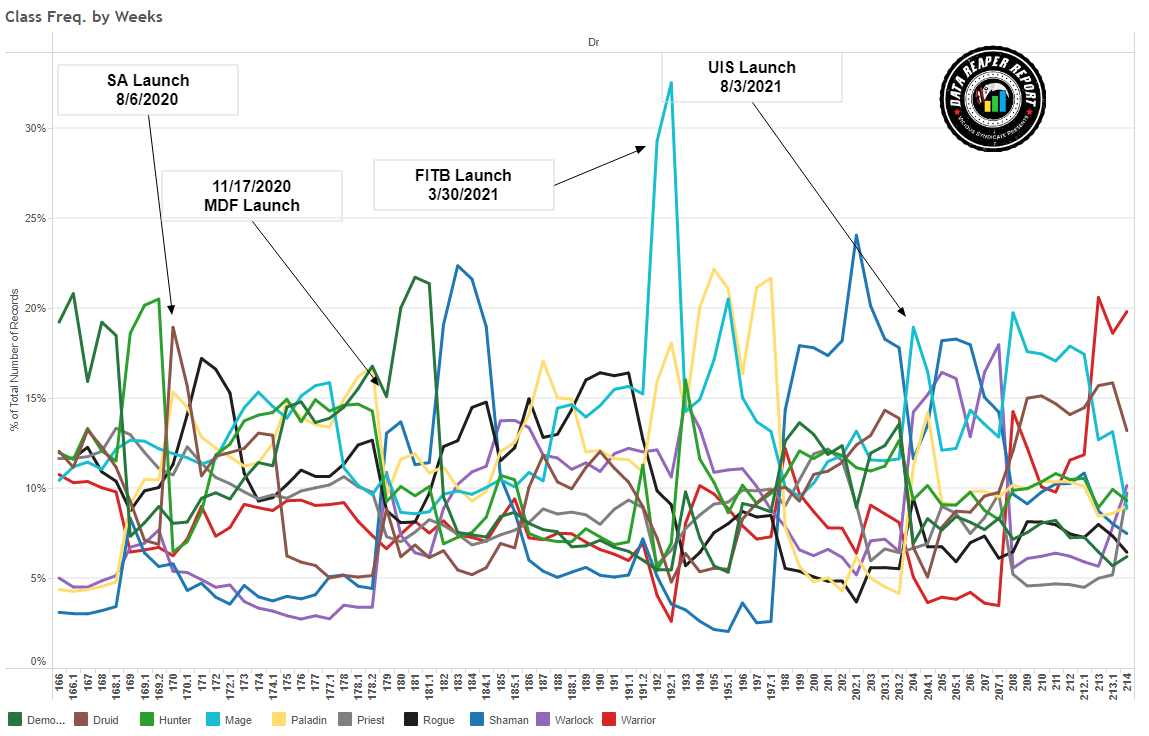 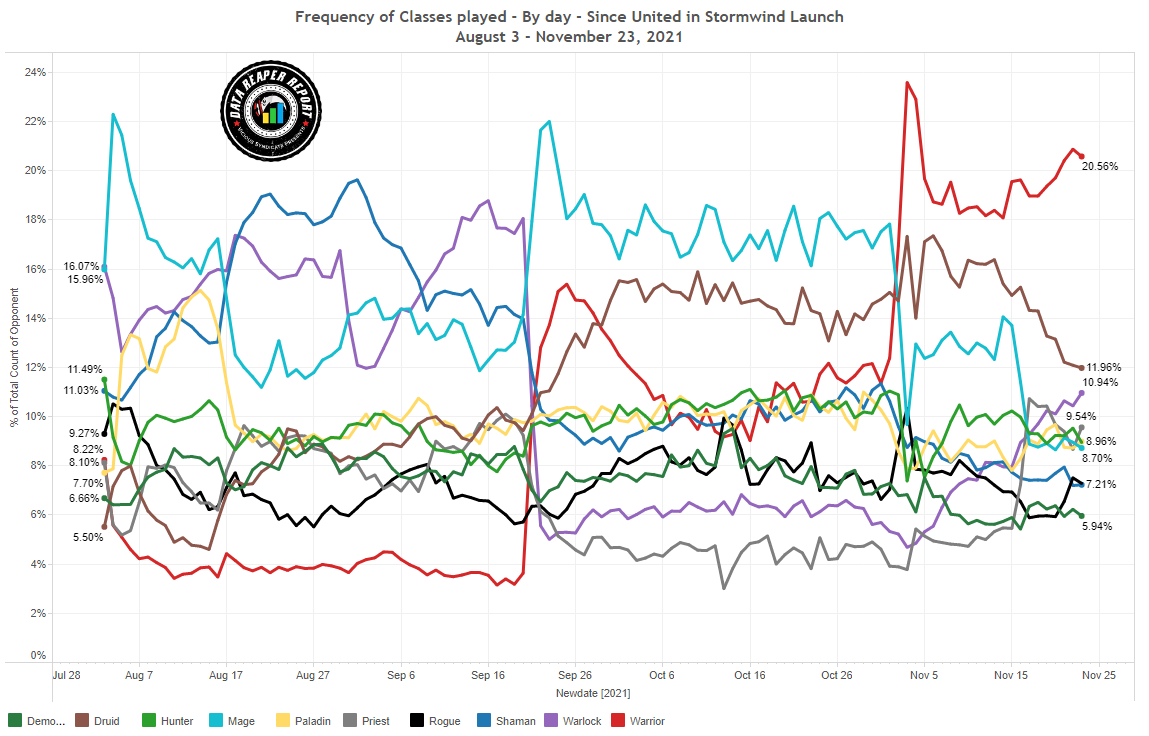 Quest Warrior, at least judging by its play rate, looks extremely dominant on ladder. Its presence peaks at over 22% at Diamond 4-1, before dropping to “only” 15% at top legend, dwarfing most other strategies in the format.

Face Hunter’s presence on ladder is modest, before spiking considerably at top legend, closing in on Quest Warrior’s play rate at that bracket.

We haven’t seen a meteoric rise in Handlock after the patch, but the deck was joined by its previously defunct counterpart – Fatigue Warlock. This archetype has arrived at the scene to answer Handlock, ironically. Zoo Warlock can also be found in both Quest and non-Quest forms.

Taunt Druid has declined, but it remains a popular ladder choice outside of top legend. At higher levels, we see players gravitating towards Celestial Druid. How much worse did Taunt Druid get, and how much better did Celestial Druid become after the balance changes? Answers soon.

The decline of Garrote Rogue following its nerf has now positioned Quest Rogue as the primary archetype of the class at all levels of play, at least for now! Garrote and Poison Rogue are mostly seen in small numbers at top legend.

Experiments in Big DH continue but fail to gain traction. The class feels mostly irrelevant save for its growth at top legend, where we see a small number of Lifesteal DH pop up, as well as some Fel DH.

No explosion of Libram Paladin has occurred, which might have been partly a result of the emergence of Fatigue Warlock, a painful counter to the deck. Not much else is happening here.

Shaman is also uneventful. The main difference since the patch is that there are less Quest Shamans and more Elemental Shamans, but both archetypes make up a small portion of ladder.

Priest is seeing… renewed experimentations. Big Undying Priest is all the rage with the new inclusion of Vanndar. At top legend, we mostly see Miracle Priest being tested with the addition of Drek’Thar. Is there new hope for Anduin, or is the class’ rising play rate a false dawn?

Mage has taken a big hit in its play rate. Quest Mage is still quite popular at lower ranks, but declines as you climb ladder, and has completely disappeared from top legend play. At higher levels, Mozaki Mage has replaced it, with players experimenting with an alternative win condition for Spell Mage following the nerf to Sorcerer’s Gambit. 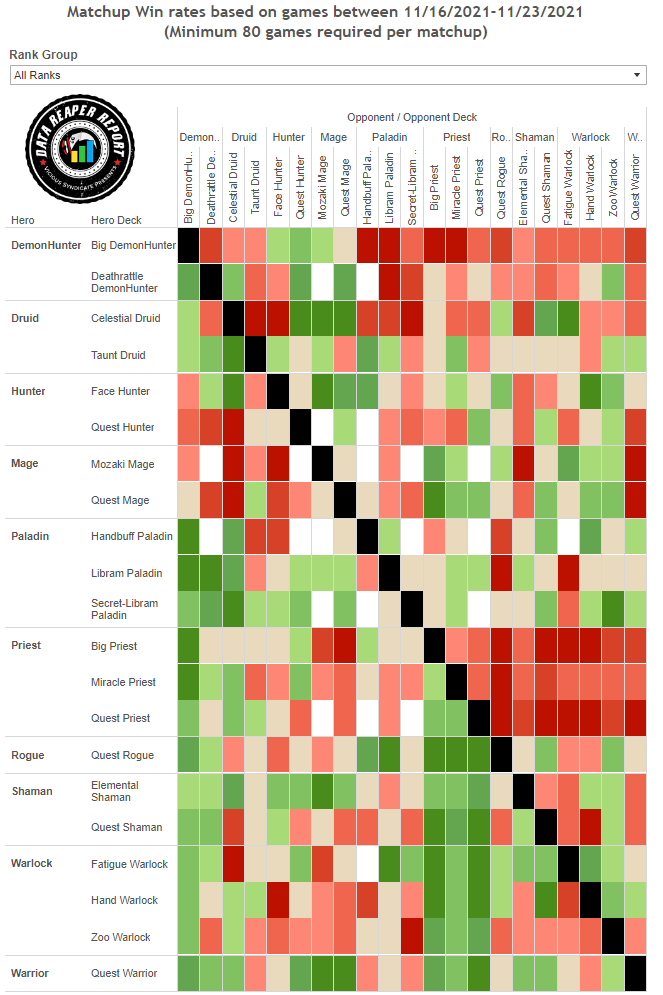 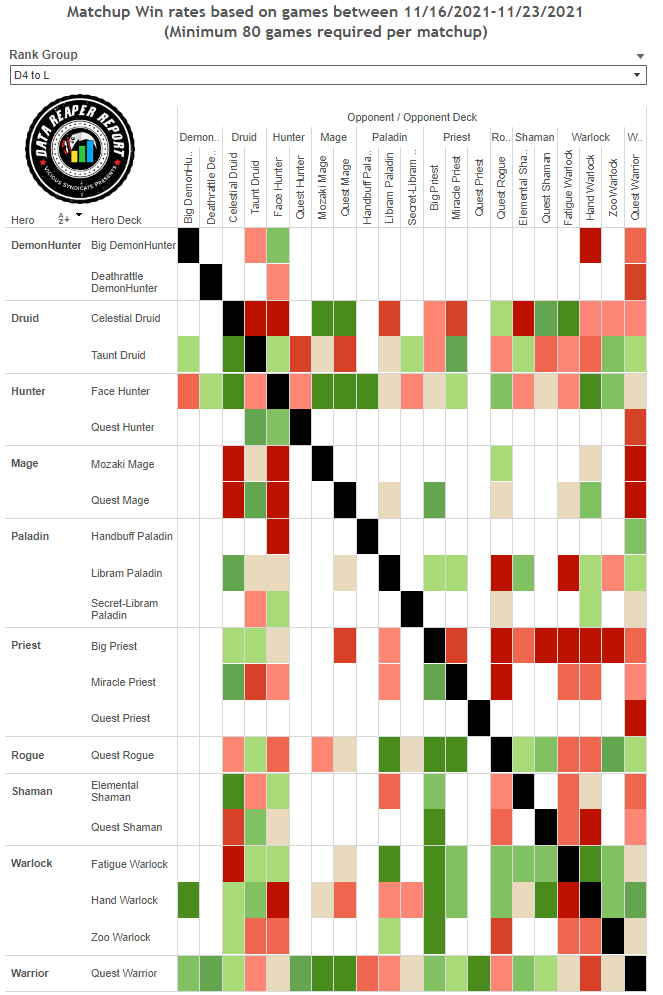 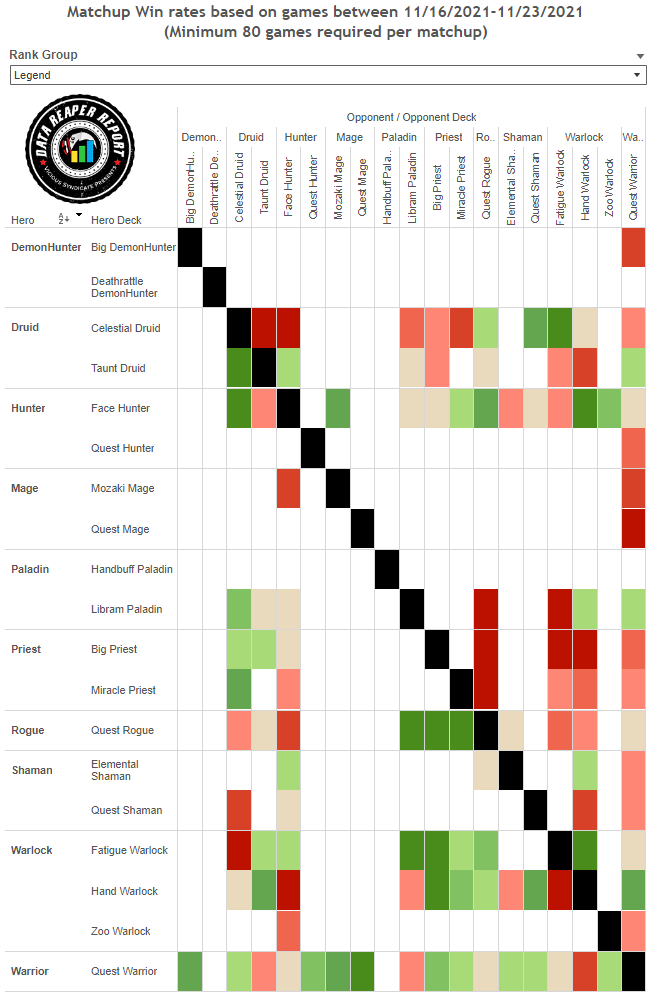 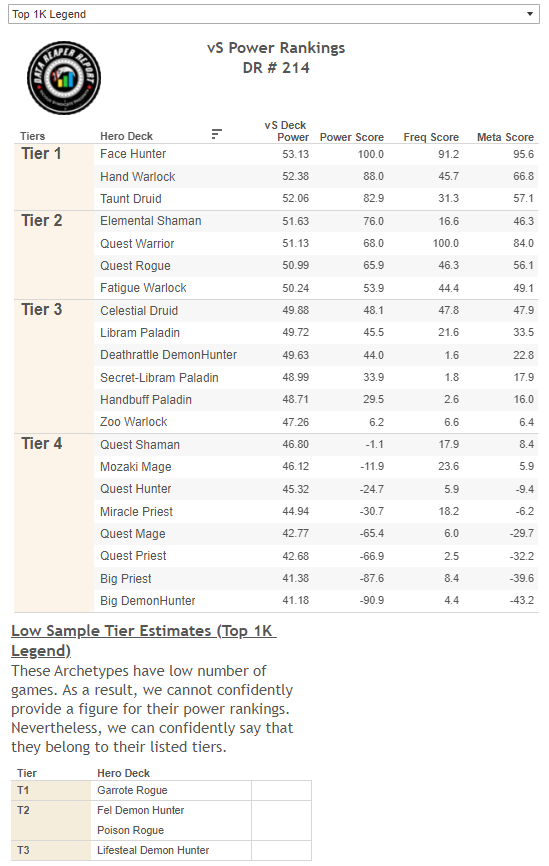 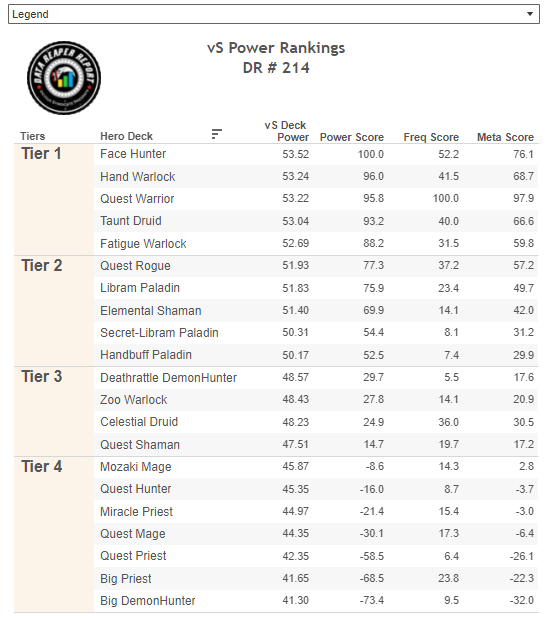 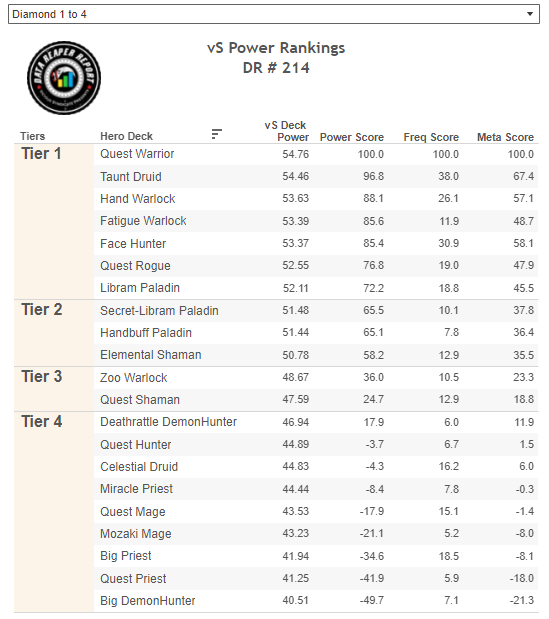 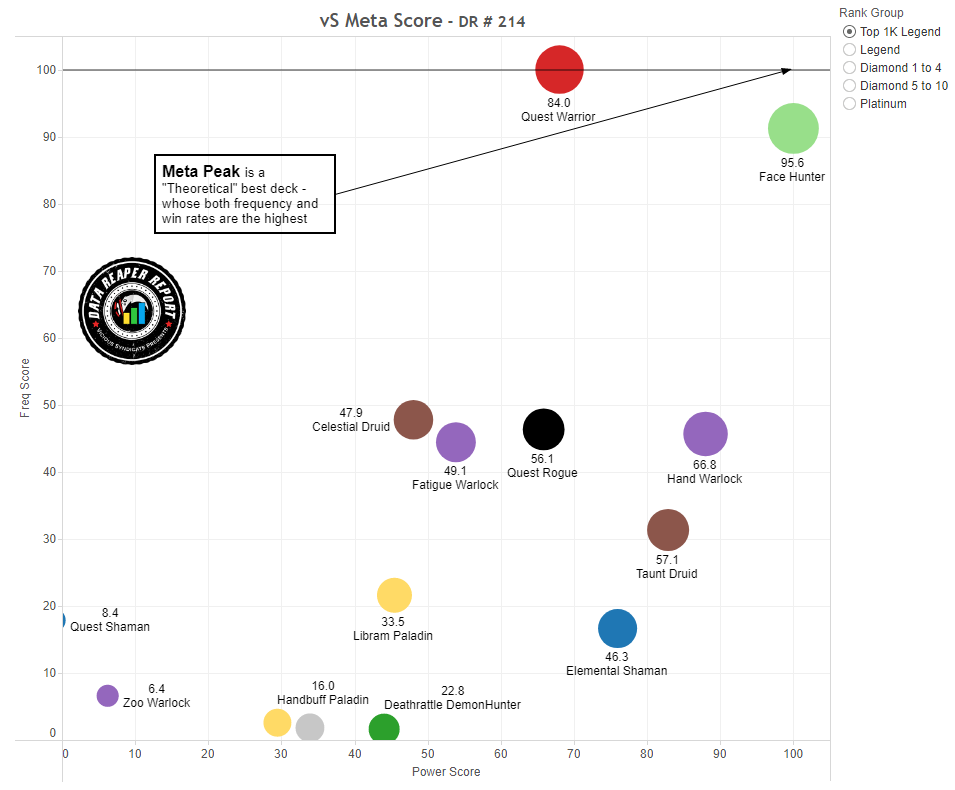 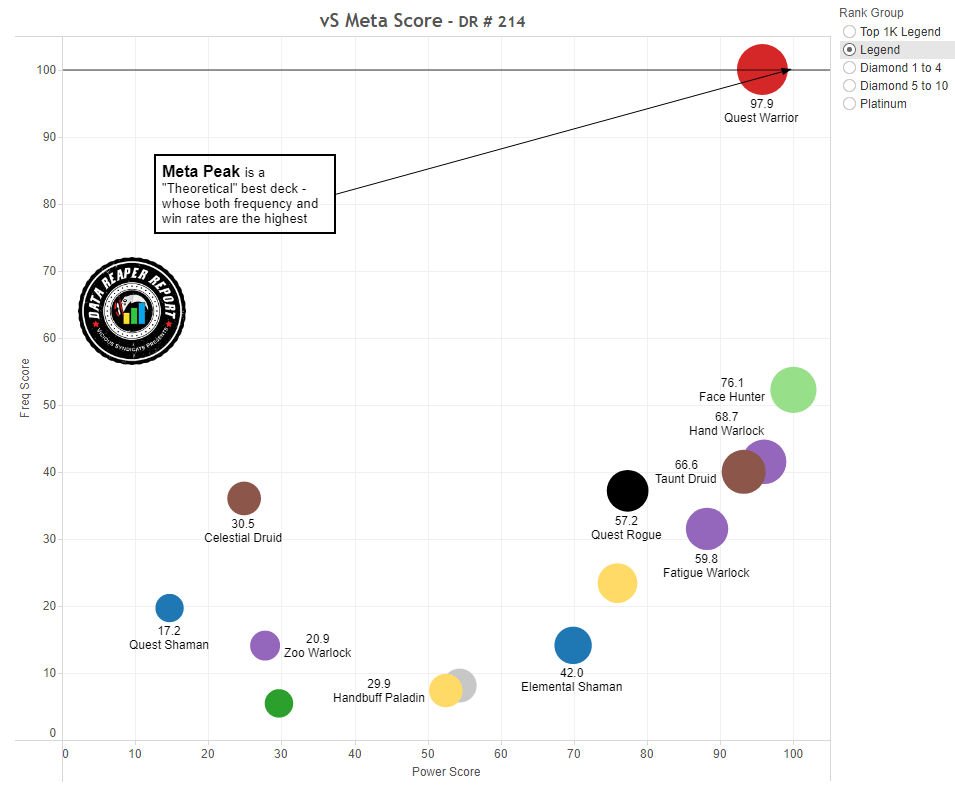 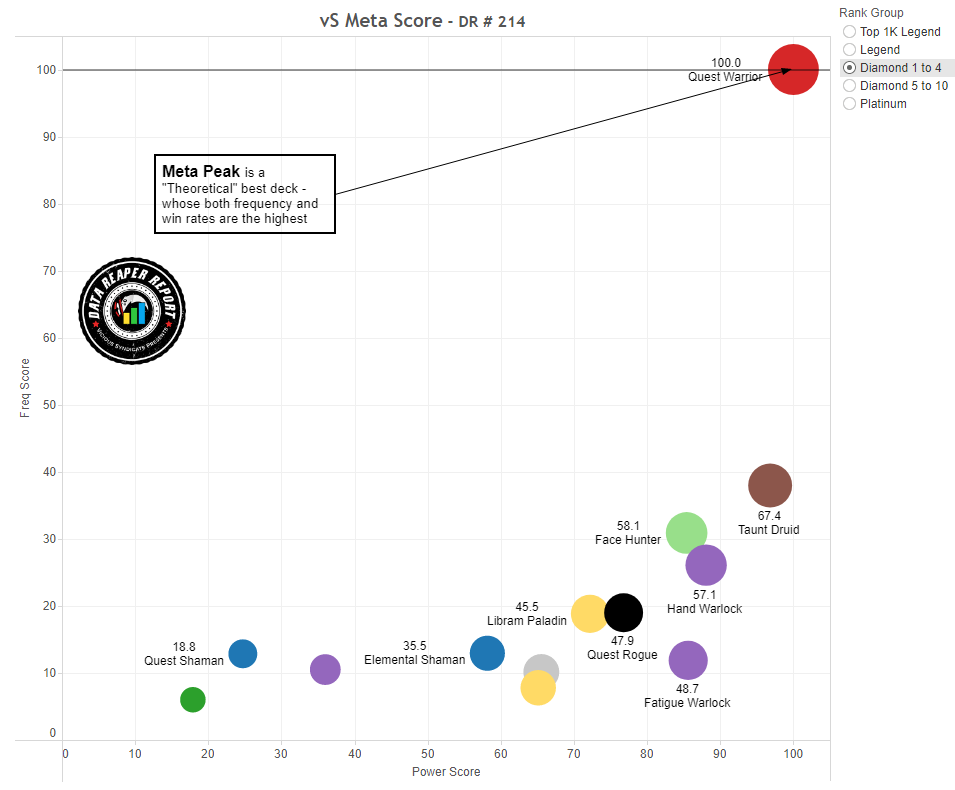 Quest Warrior has improved after the patch and looks like a very intimidating and extremely common ladder performer, though one that does decline at higher levels of play to more reasonable levels.

Ratchet Privateer has started to see more play due to its synergy with Whetstone Hatchet and additional consistency to quest progression. Man the Cannons has gotten worse after the patch following the decline of Taunt Druid, but it’s still stronger than other alternatives and acts as a cheap activator to Barov. This package isn’t mandatory.

Face Hunter is looking as powerful as we expected it to after the patch, following the decline of Taunt Druid and the expected rise of Handlock. The Doggie Biscuit/Ramming Mount build is exceptionally strong and looks perfect.

Handlock is one of the best decks in the game, but the rise from the ashes of Fatigue Warlock, an additional reliable counter, may have prevented Handlock from completely taking over the format.

Handlock’s build stays the same, though it might not be as crazy to cut Neophyte for Unstable Shadow Blast these days, perhaps until Garrote Rogue and Lifesteal Demon Hunter regain their presence at higher levels of play.

Fatigue Warlock’s build is quite solidified, though we suggest experimenting with running a 2nd Nightshade Matron. We realize the 2nd Hand of Gul’dan is often cast in combination with Tamsin for the deck’s late game OTK combo but running two Matrons might be worth it just to fire off the first discarded Hand earlier and more consistently.

Taunt Druid may have taken a hit in its performance in various matchups because of the nerf to Razormane Battleguard, but the field has compensated for it by becoming more favorable to the deck, keeping it in Tier 1 at all levels of play. It can thank the heightened popularity of Celestial Druid following the patch, as well.

Taunt Druid might become even better if a new build gains further traction and maintains its current level of performance. A new Drek’Thar variant of the deck looks nuts. To put it in simple terms, Drek’Thar is Call to Arms, an utterly broken card in the deck. If you’ve chosen to represent the Horde, give the featured build a try. You’re unlikely to regret it.

Celestial Druid got a lot of hype shortly following the patch, and though it is a stronger deck than it used to be, it has gotten gradually worse over time as it is still easy to target. Both Taunt Druid and Face Hunter remain Tier 1 decks that completely obliterate it.

Garrote Rogue has taken an initial hit in its performance, to the point we speculated it may end up settling at Tier 2 at higher levels of play. Not so much. The deck’s flexibility and unprecedented skill ceiling has once again come to the forefront, and high-level players have quickly adjusted to the nerf and are currently speed running the deck back to a Tier 1 position. Garrote Contact Rogue during United in Stormwind should be remembered as the most skill intensive deck of all time, at least during the time we’ve been around to produce these reports.

Quest Rogue and Poison Rogue also look like pretty good and competitive options in the current meta. We’ve adjusted the Quest Rogue build to the lower popularity of Taunt Druid by cutting the stealth package and adding a stronger late game. There’s a very viable alternative in the featured list to cut Wicked Stabs and improve your Swindles. Wicked Stabs are just not great in general, and they’d be instantly cut if the alternatives weren’t mediocre themselves.

Demon Hunter is in a fine spot. It may have initially suffered the effects of Quest Warrior and Celestial Druid’s popularity, but since these decks are likely to decline to some degree while Garrote Rogue is very likely to return to prominence, Lifesteal DH may find more joy soon.

Fel DH is also in a decent position, as it remains an extremely hard counter to Face Hunter and Taunt Druid, and those decks are still strong.

Other Demon Hunter decks are not having a great time. Big DH is a meme and Deathrattle DH is mediocre at best.

The rise of Fatigue Warlock has thrown a wrench in Libram Paladin’s expected rise to success. Add Garrote Rogue’s imminent return and Paladin will likely remain a repressed option at higher levels of play. The class remains strong elsewhere on ladder, but there are no significant developments in its archetypes’ card choices.

The success of Warlock in the format is very bad news for Quest Shaman, and the deck hasn’t really improved despite Mage’s collapse. Lifesteal options did get stronger after the patch due to Face Hunter’s rise, so we like Canal Slogger and Cookie the Cook now.

One archetype that does look better after the patch is Elemental Shaman, thanks to the rise of Face Hunter and the decline of Taunt Druid. We recommend running the Doom variant at legend, and the Whack variant elsewhere.

Priest has attracted a lot of new interest following the patch thanks to the buff to Renew as well as the synergy of Drek’Thar and Vanndar with some of its flailing archetypes. Problem is that these archetypes are still flailing.

Vanndar is very powerful in Big Priest, but it’s not enough to make this deck real. We do think that you shouldn’t go the full Shadow build route since you give up too much defensively for it.

Drek’Thar is similarly powerful in Miracle Priest, and this deck might be competitive if more players started running Elekk Mount. It is one of the deck’s best cards and should be considered core but it isn’t a common inclusion currently. If you want to have the best chance of success with Miracle Priest, it is mandatory.

Shadow Priest might still be very competitive, but players aren’t interested, and it isn’t popular enough for us to tell.

Quest Mage looks dead and buried. The nerf absolutely killed it, and the fact it has a 7% play rate at Gold through Bronze is downright incredible and shows how much it was loved by a significant section of casual players.

Mozaki Mage did pop up after the patch and displayed significantly stronger results compared to Quest Mage, but as time went on, the meta has grown increasingly hostile to the deck to the point it isn’t worth playing.

This is it for United in Stormwind. We will now begin working on expansion content, with a Comprehensive Card Preview and a Theorcrafting article planned as usual. We will probably be very wrong about certain things, but it will be fun to speculate, nevertheless!

Our chosen Meta Breaker is Garrote Rogue, perhaps as a tribute to a deck we’ve never seen before and may not see again. It’s been an honor collecting your data, Garrote Rogue, we will be saving your case study as a comparison point going forward.