Welcome to the 217th edition of the Data Reaper Report! 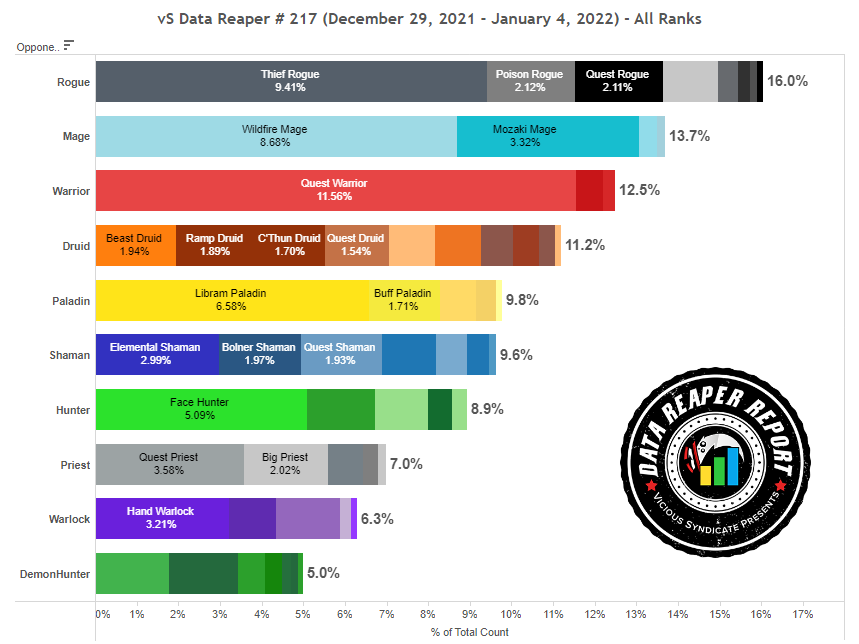 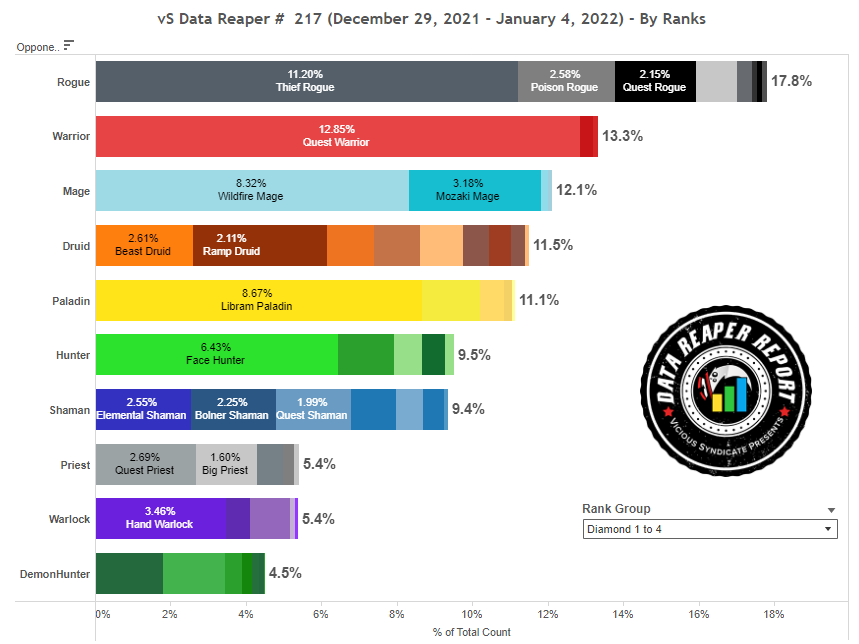 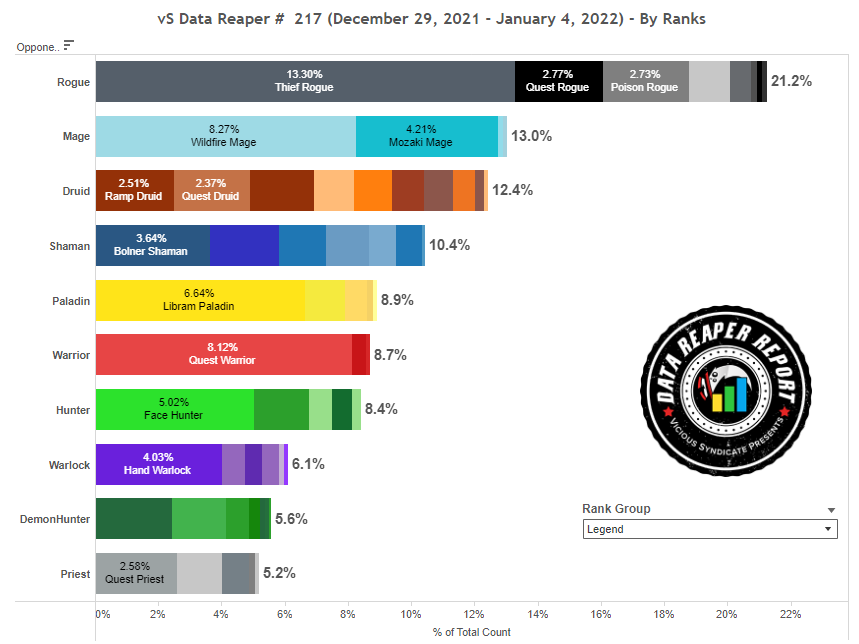 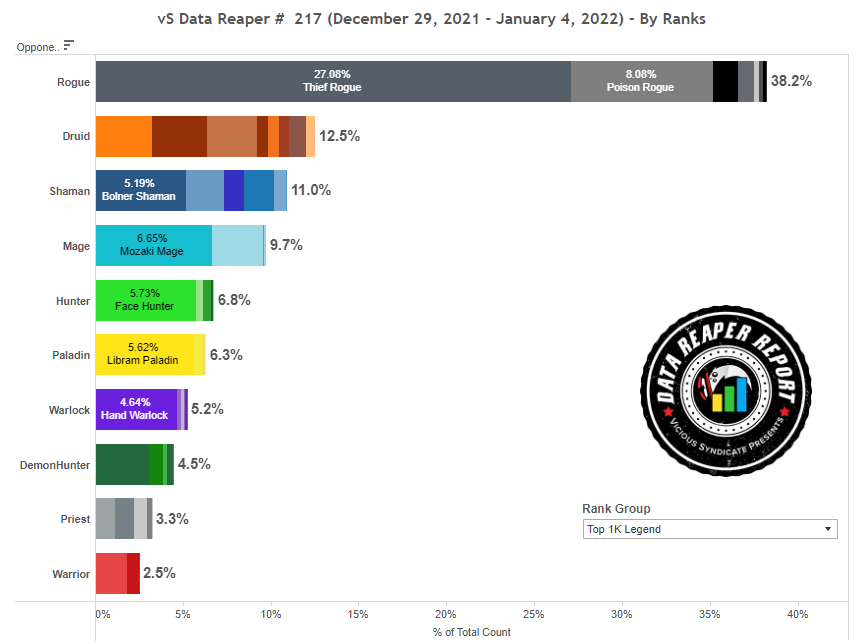 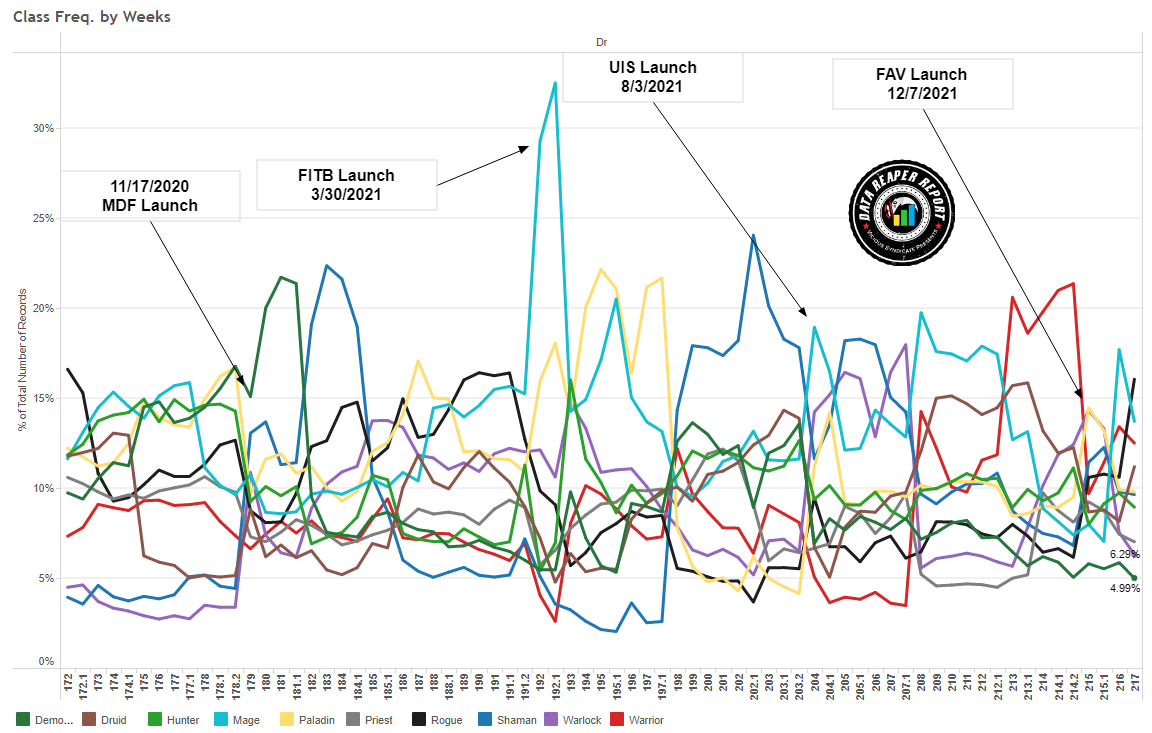 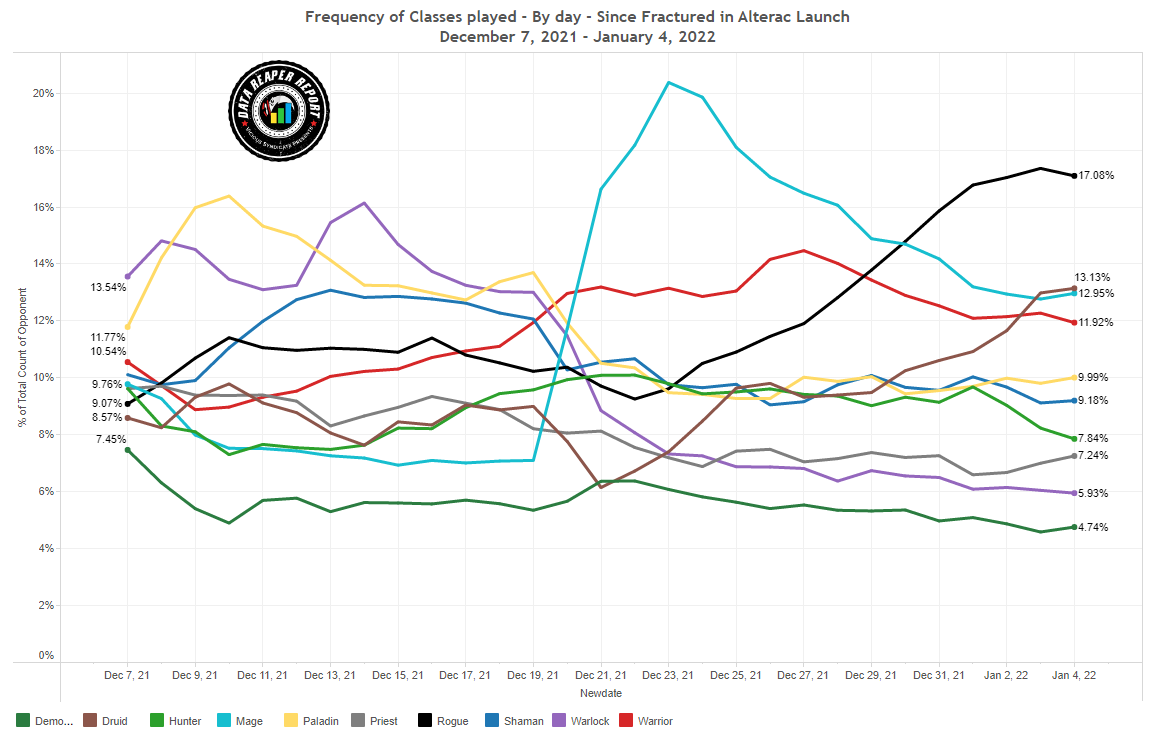 Uh oh. From what seemed like a diverse field, the meta is now headed in a very different direction judging by the play rates seen at top legend, where we usually focus on because they’re often predictive for the rest of ladder. Thief Rogue has completely taken over higher levels of play, and its influence is trickling down to the rest of the ladder, with the double Preparation build spreading fast. Poison Rogue is another deck that’s beginning to pick up more play, and it’s hilariously the 2nd most popular deck at top legend with an 8% play rate, following Thief Rogue sitting at 27% (!!!). Why is this happening? Answers later.

The main development in Druid is the emergence of Beast Druid, with a new build popularized by NoHandsGamer gaining traction. Ramp Druid is also picking up more interest. The class is still exhibiting a lot of different decks and it’s hard to predict what you just queued into when faced with a Druid. It could be many different Druid decks. It could also just be Rogue.

Shaman is in a similar position to Druid, with lots of different archetypes seeing bits of play, though Bolner and Quest Shaman seem to be ‘taking over’ where the meta is most advanced in its development and where Rogues are just much more popular.

Face Hunter remains the dominant archetype of its class, with bits of Big-Beast Hunter looking secondary, but all other Hunter decks vanish from top end play. It’s the same story with Libram Paladin, Handlock, Fel DH and their respective classes. You mostly see one deck from these classes at top legend, and these decks are obviously dwarfed by the presence of Rogues.

Quest Warrior has declined, but the deck is still very prevalent through most of ladder. It’s the most common opponent you will run into until you hit legend, where Rogue just takes off and Warrior nosedives. The dive is so hard that Warrior becomes the least popular class at top legend.

Not a lot of development in Priest. The class is stagnant and none of its archetypes show signs of an awakening. 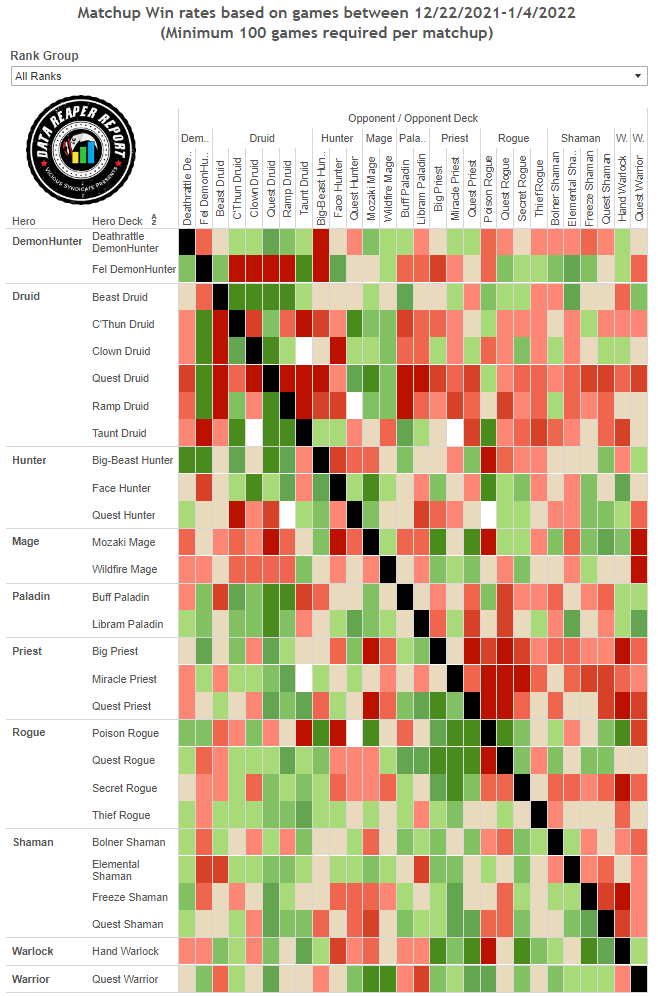 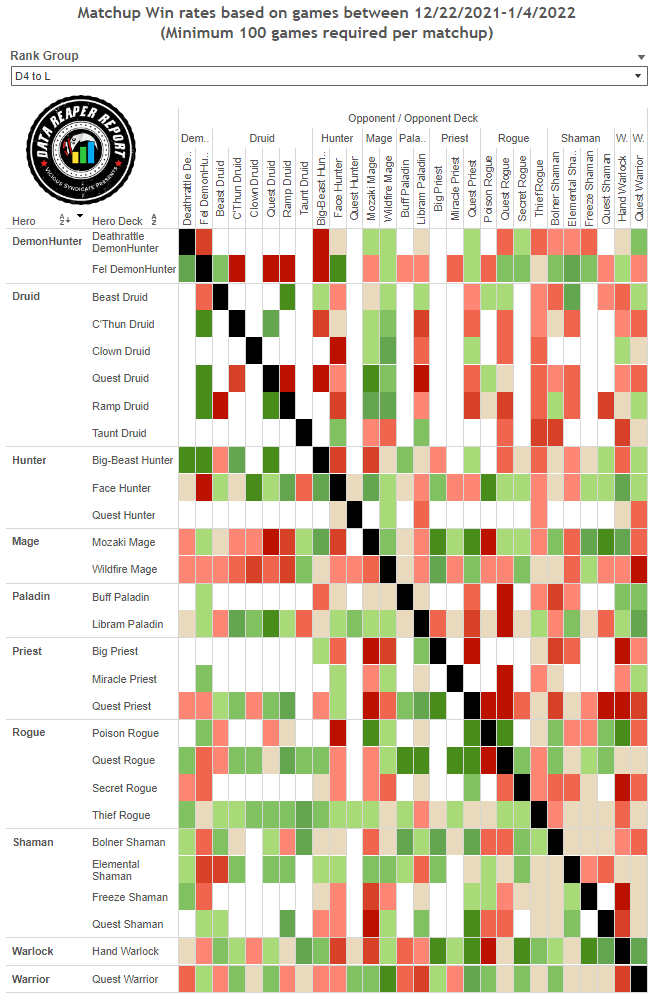 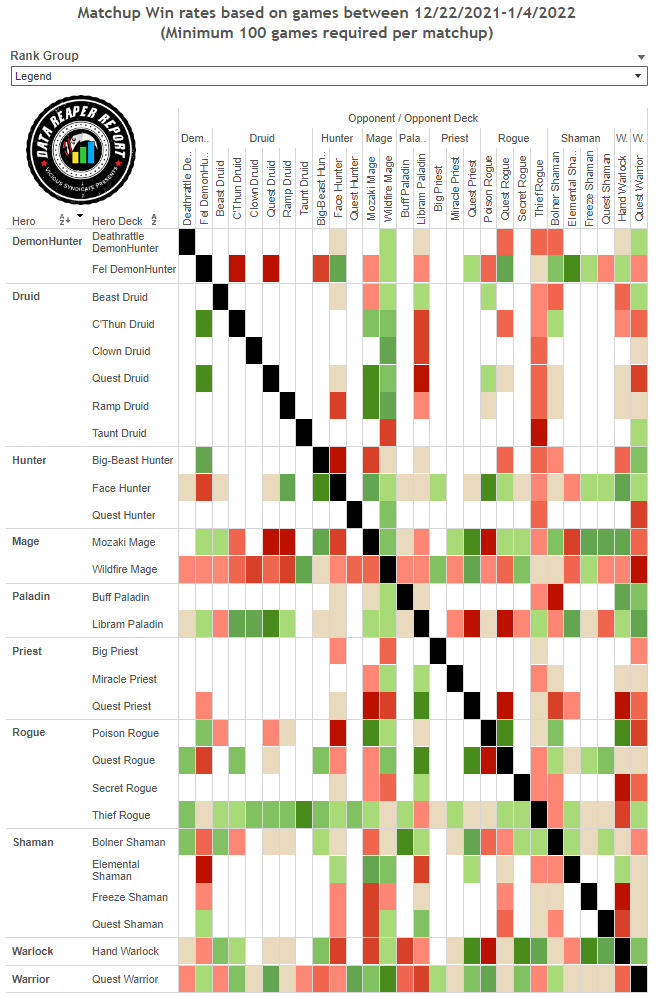 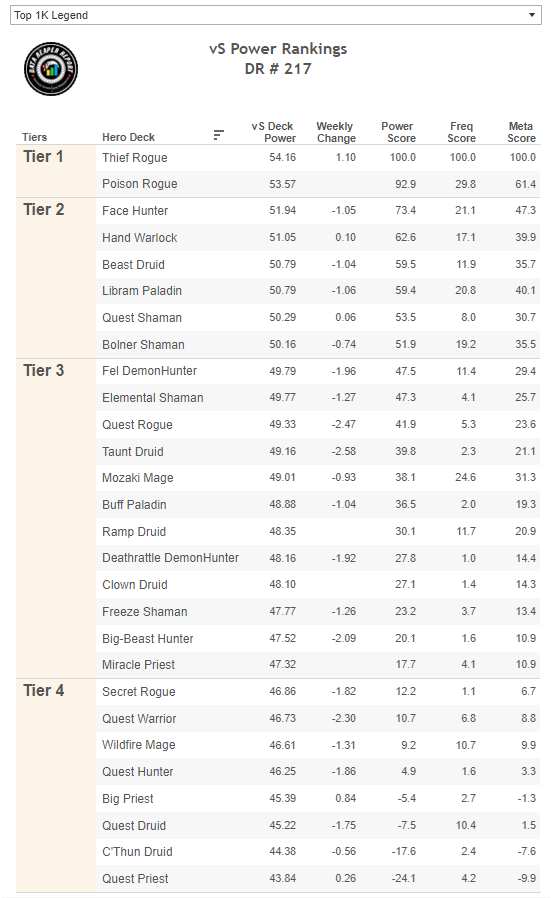 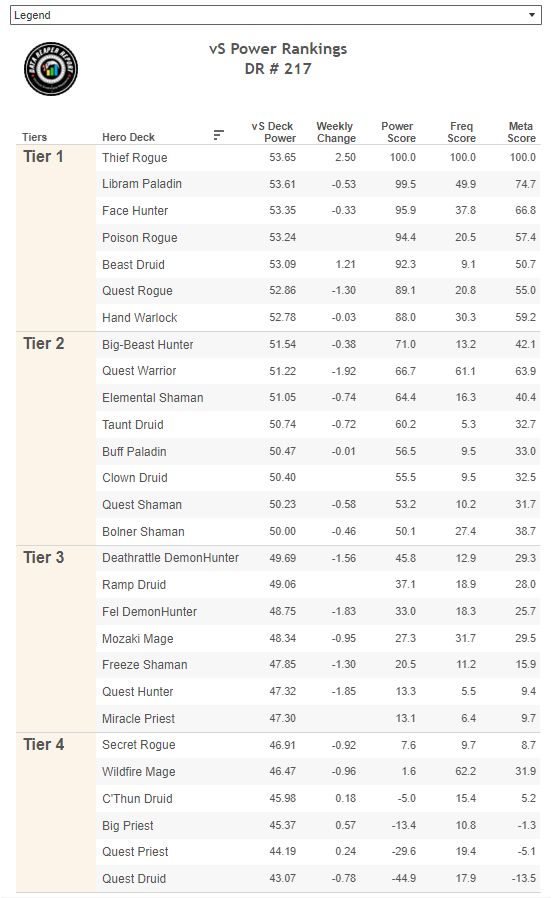 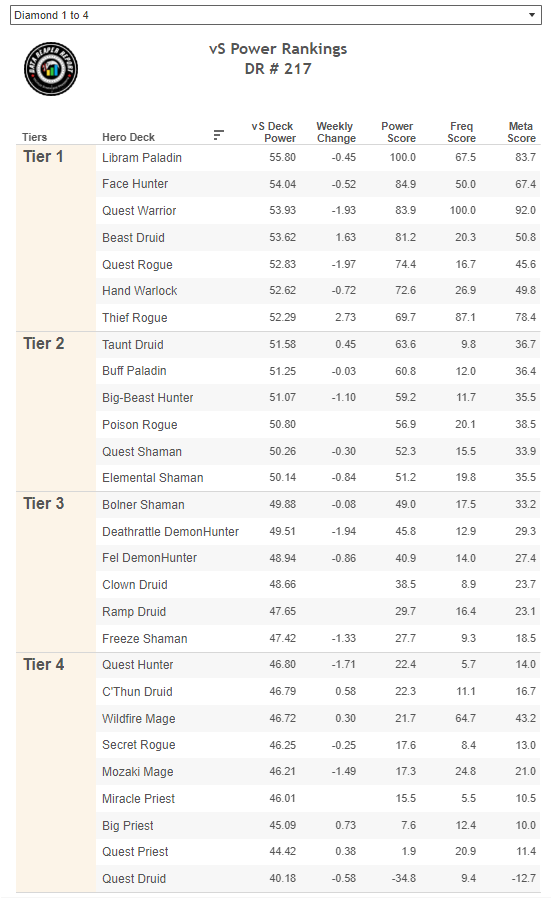 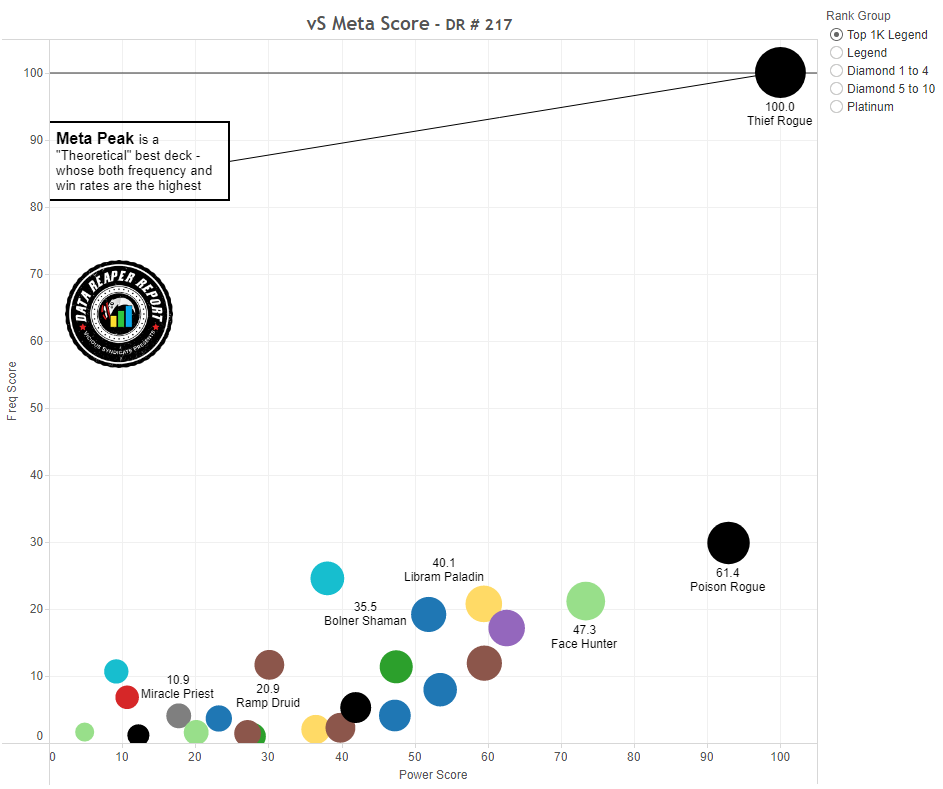 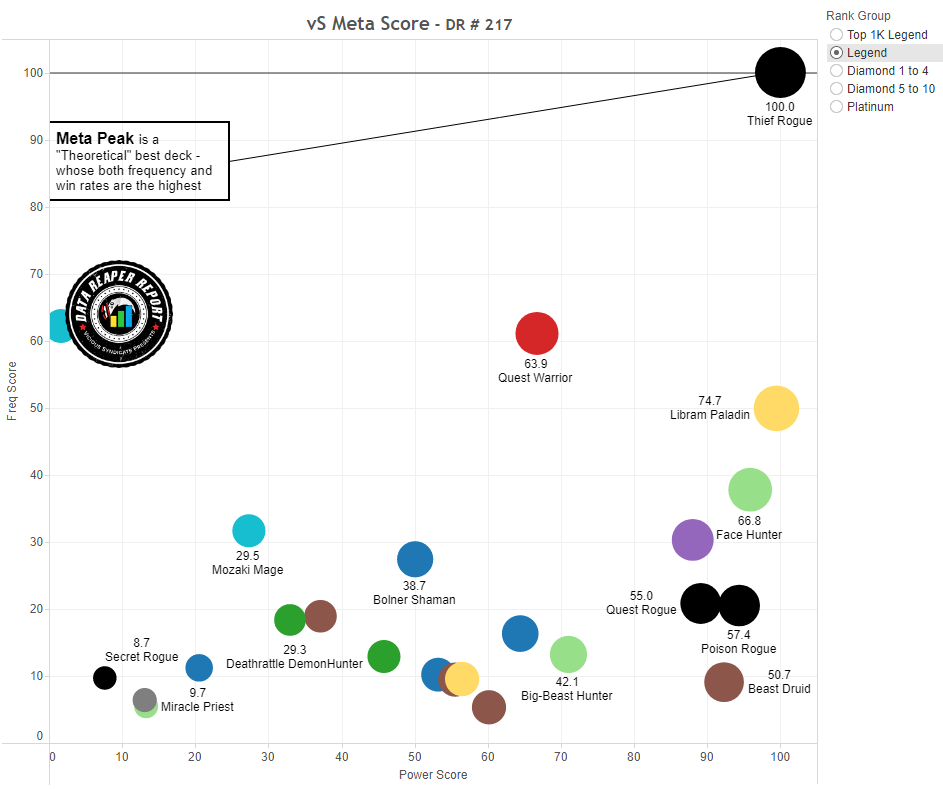 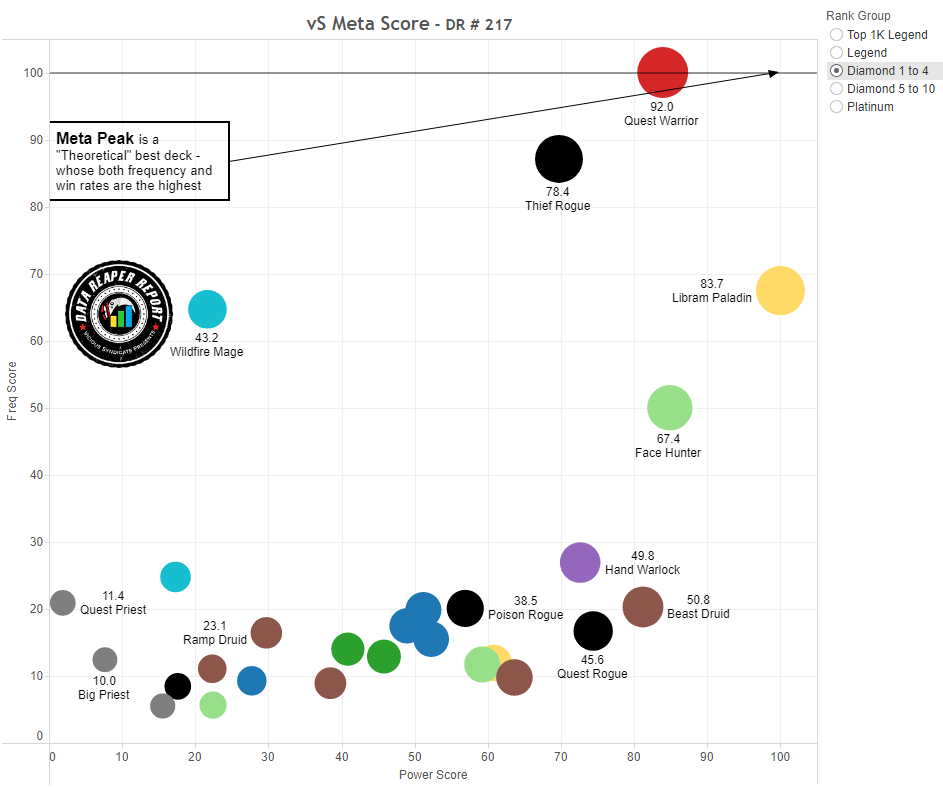 Unfortunately for the format, Thief Rogue has made the biggest improvements in its refinement thanks to the addition of Preparation. It has made Thief Rogue’s early game more explosive thanks to Reconnaissance, but more importantly, it has added consistency to Thief Rogue’s burst combo with Edwin and Mr. Smite. This has put the brakes on the ability of defensive decks packed with removal to reliably counter it, and the only way to do so is by launching incredible counter-pressure that is somewhat resistant to Shadowcrafter Scabbs, which is a unique trait only exhibited by Handlock. This deck is getting nerfed.

Poison Rogue is ironically the only other deck in the format that can compete with the sheer dominance of Thief Rogue at higher levels of play. It’s the strongest it’s ever been since the release of Swinetusk Shank, with Shadowcrafter Scabbs plugging its biggest weakness, allowing it to completely reset the board and negate all pressure from the opponent. Its off board burst damage thanks to Guild Trader and Blackwater Cutlass discounts is so high that it can OTK opponents without even hitting the opponent in the face with its weapon. Couple that with chains of invulnerability through Cloak of Shadows setting up Scabbs, and there is an absence of reliable counterplay that can push this deck off Tier 1. This deck is also getting nerfed.

Quest Rogue is a good deck, but not as good as the first two, and since it gets annihilated by Poison Rogue, it has fallen off hard at higher levels of play. Garrote Rogue is outclassed even harder, as Poison Rogue simply utilizes Garrotes better.

Druid is still exhibiting great deck diversity, but the pressure of early Wildpaw Gnolls is taking its toll on ramping Druid decks. The biggest news this week is coming from Beast Druid, with the emergence of a new variant thanks to the work of PTJon7 and NoHandsGamer.

It was tricky to work on this variant for this report, as it doesn’t have great card choice diversity, with players largely copying the NHG build. We will direct you to where we can see improvements. There are 6 slots up for grabs.

Wildheart Guff isn’t too great of a fit since this deck doesn’t really want to go too hard into the late game. Keeping it in your opening hand is usually a losing line since you want to power spike around the mid-game. Ivus carries highly optimistic synergy with Oracle and largely depends on finding Guff, which isn’t a great card in the deck anyway. Kazakus seems like a theoretically good fit with the lack of 4-drops, but it looks very underwhelming. Speaker Gidra isn’t terrible, but other than Arbor Up, it doesn’t have great activators. Living Seed tutors Matriarch and Owl, but the card is a bit slow, and we can see it being cut as well.

No significant news in other Druid decks. We like the work that was done with them last week. Clown Druid is leaning more towards Guardian Animals to fare better against Rogues.

Shaman is in a decent spot. Bolner Shaman and Quest Shaman look like the decks that can best handle current meta developments due to their reasonable matchups with Thief Rogue.

A common cut from Quest Shaman is Canal Slogger, but we think this is generally the wrong move. Slogger is a very strong card in the deck that is quite important in some matchups (Face Hunter) and enables some strong openers in the first phase with Lightning Bloom. Some advocate for Bru’kan of the Elements. It is good against Thief Rogue, which is the main reason why it’s beginning to see more play. But, even a 30% Thief Rogue presence at top legend doesn’t make it worthwhile. At ~50% it starts to make sense! It costs 8 mana and that’s a bit rough for this deck. Play it only if Thief Rogue is truly everywhere at your rank.

Mozaki Mage is prevented from being a dominant deck at top legend thanks to the presence of Poison Rogue. Is this the kind of meta correction we want in the format? Probably not, which is one reason we expect this deck to be addressed alongside Poison Rogue. The other reason being that you can die on turn 6 without an actual game of Hearthstone being played thanks to Incanter’s Flow and Siphon Mana.

Wildfire Mage is playable, but not very good. Its optimized builds sit around Tier 3, and the messiness of the archetype does make it look worse, but there are better decks to play.

Face Hunter is a very strong deck that simply can’t compete with Thief Rogue’s early game dominance through Gnolls. The Crescent build does help but not to the point this matchup becomes comfortable in any way.

Big-Beast Hunter continues to look quite good on ladder but dips at higher levels once again due to the relentless pressure of Rogues. Other Hunter decks haven’t picked up play.

Libram Paladin is one of the stronger decks in the format, and one that can compete with the dominant Rogue decks, though Shaman is beginning to expose some of its vulnerabilities. This is one of the reasons we’re liking Mr. Smite in the deck. When your board is constantly frozen by Windchills and Snowfall Guardians, having access to burst from hand can be a game changer.

Handlock is the only deck in the format standing between Thief Rogue and a Tier S status. The strong removal suite and life gain combined with cheap threats that can be easily replayed after Shadowcrafter Scabbs is the exact combination that consistently frustrates the otherwise unstoppable Rogue strategy. Play this deck if you want to counter the best deck in the format but be wary of Mozaki Mage and Poison Rogue. Neophytes help in these matchups, but their existence still prevents Handlock from becoming more popular and able to suppress Thief Rogue any further.

Fel Demon Hunter has stagnated a bit after seeing its Thief Rogue matchup worsen. This is a matchup where the Edwin/Smite is highly relevant, and through better play and better card choices, Rogue’s ability to utilize it has improved. The matchup has now become very close rather than DH favored, which means Fel DH lost a big selling point to potential pilots.

We’ve also had a chance to properly look at Magtheridon. It is very good against Druids, Paladins and Warlocks, but not so good against the rising Rogue decks, which is why it’s looking more like a tech card than a core card in the current format. You’d rather have two copies of Chaos Leech to deal with Wildpaw Gnolls.

Quest Warrior is certainly one of the strangest decks we’ve ever seen. A dominant ladder performer throughout most ranks, it becomes arguably unplayable at top legend since its predictable play patterns are dramatically exposed by stronger players.

This has led to a weird situation. There’s a very fair argument to nerf the deck because of how strong it is for most Hearthstone players, and yet the class would be completely deleted in such a case. Perhaps it’s a good time to buff other aspects of the class. But most importantly, Control Warrior decks are in desperate need of card draw because Outrider’s Axe and a couple of tutors just are not enough to make any late game strategy remotely consistent.

Miracle Priest is okay at higher levels and that’s about it. Slower Priest strategies simply give too much time for their opponents to execute their own win conditions, and those win conditions tend to be faster and more effective. Until that changes, expect Big and Quest Priest to see quite a bit of play, have a few people occasionally swear of their viability, only to produce the same results every week.

Valeera has done it again. A format that was filled to the brim with options, has two options that are simply that much better than everything else. Thief Rogue is nearly the perfect deck, and only a very specific combination of traits is capable of consistently beating it. Poison Rogue has reached its peak form, with just about the most uninteractive game plan you could muster in Hearthstone. We think there is little chance that these decks will be left alone.

For now, abuse them while you still can.