Welcome to the 219th edition of the Data Reaper Report!

A Wild Data Reaper Report will arrive on January 23rd 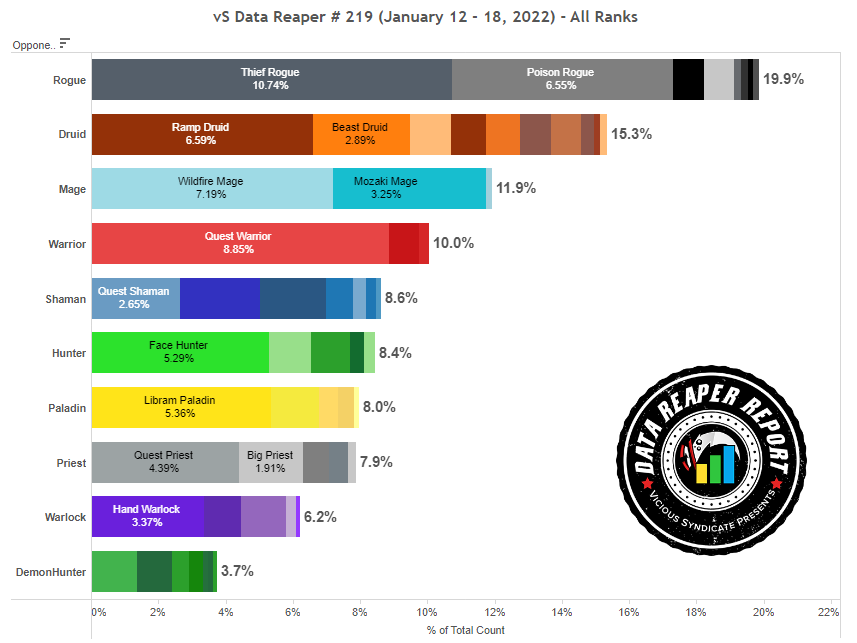 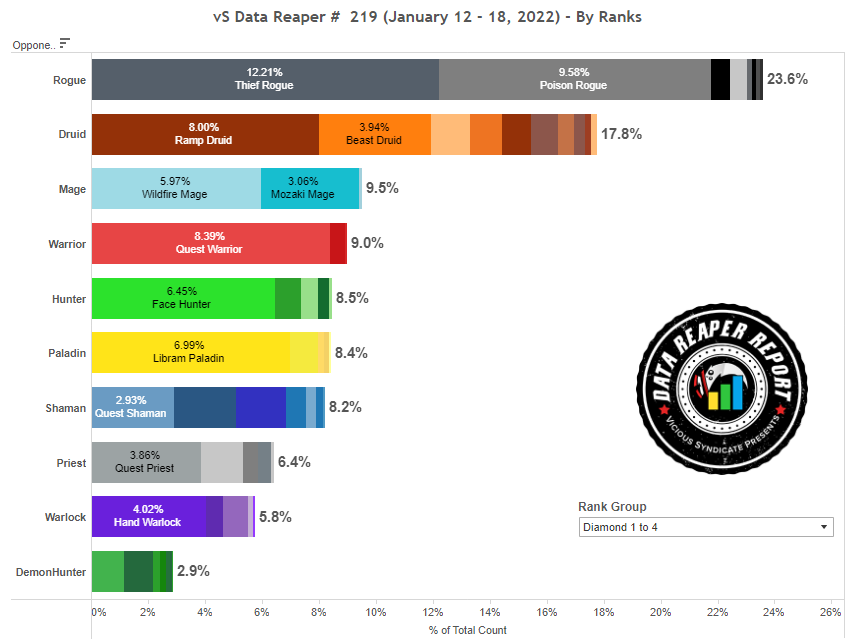 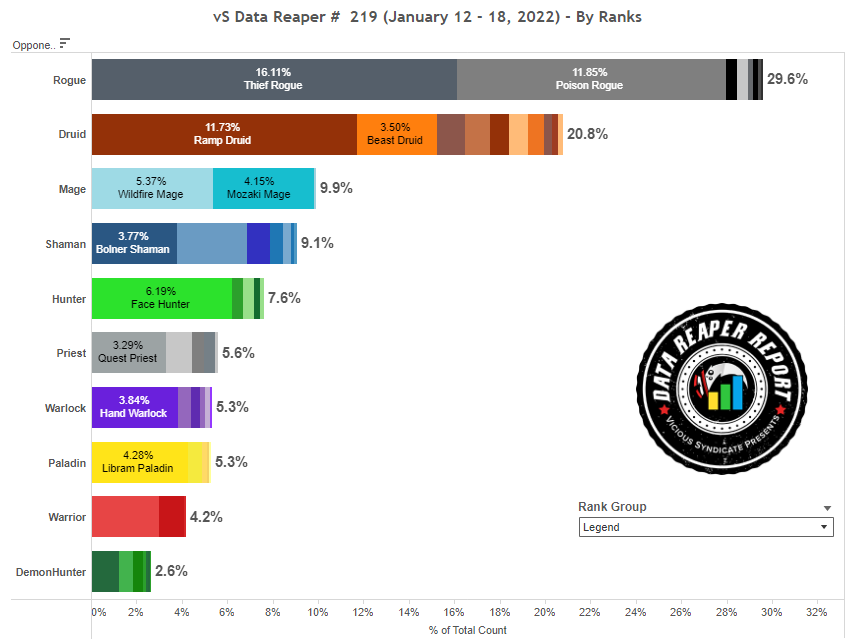 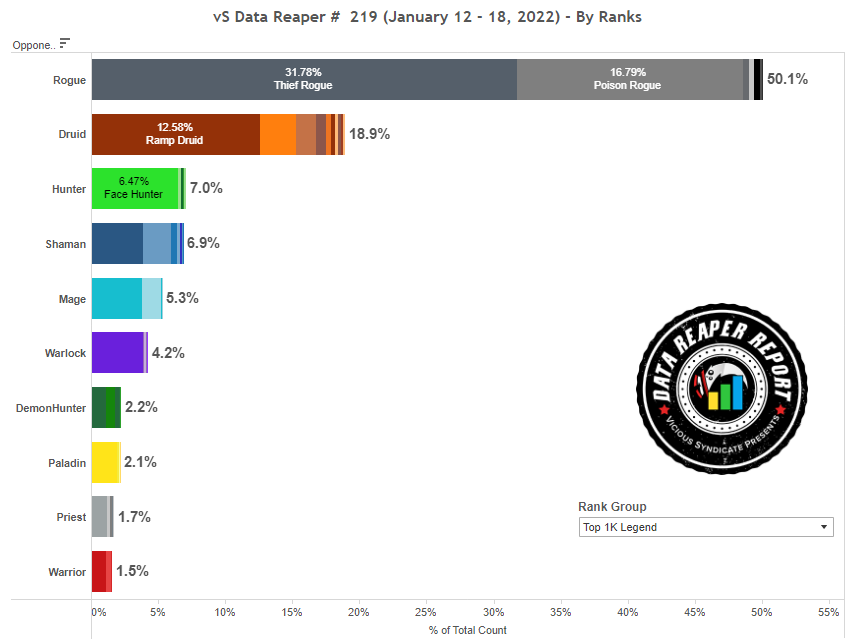 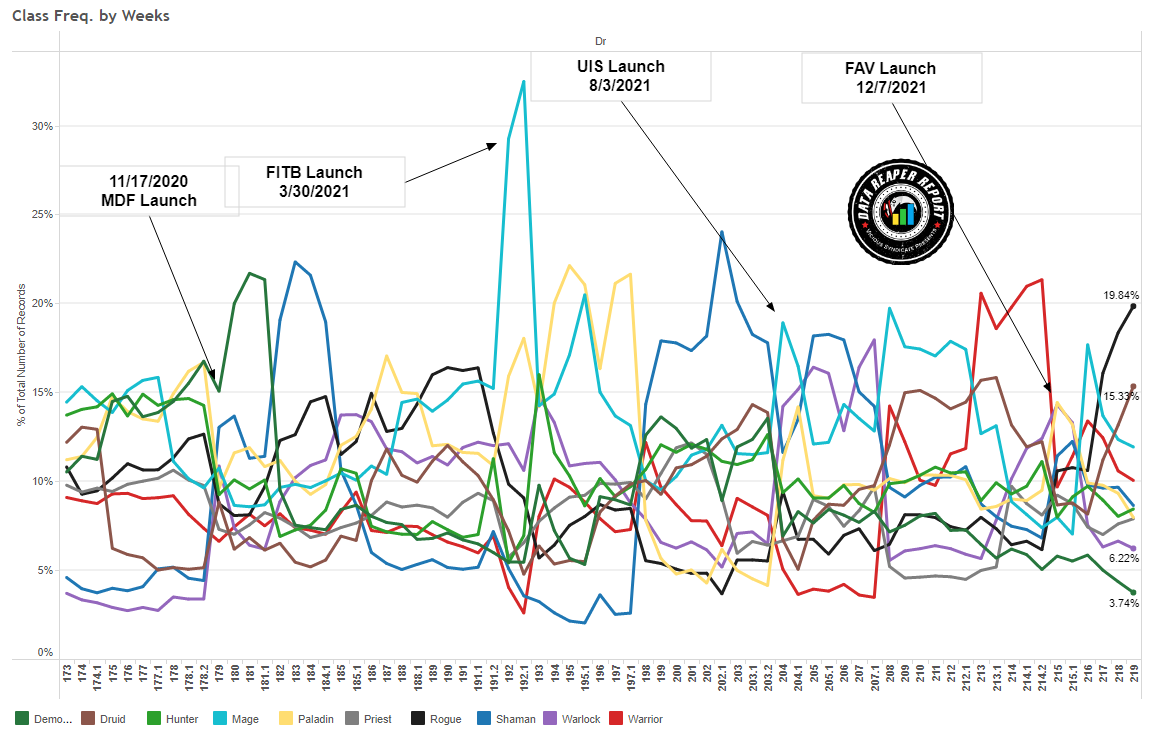 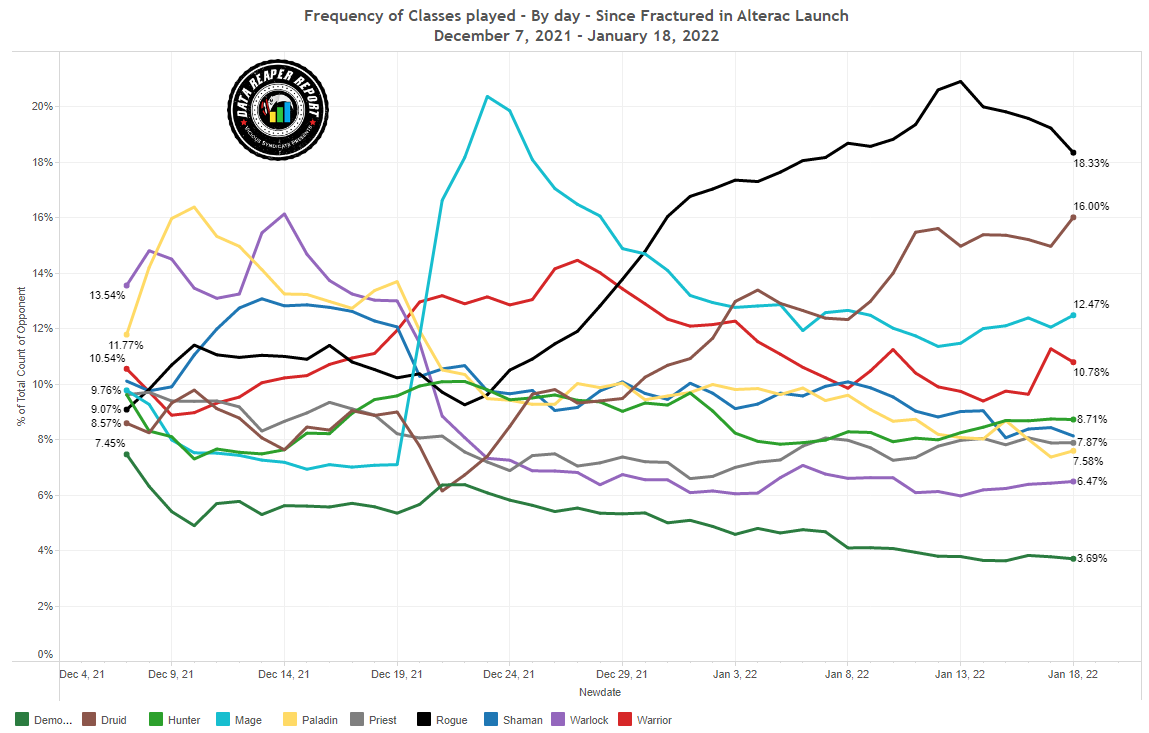 We did it, everyone! Rogue has reached a 50% play rate at top legend. Obviously, there’s not much to say here other than the fact that the class is out of control with both Thief Rogue and Poison Rogue proving to be extremely broken. Thankfully, nerfs are coming soon and we should see the format change.

Ramp Druid is seeing a surge in play. Whether this play rate spike is joined by a win rate spike remains to be seen, but there is a lot of interest in this deck. Perhaps, players are finding comfort in the warm words of Guff.

Face Hunter has risen in play. It has been the most successful non-Rogue deck in the field.

Rogue’s oppression is gradually choking Shaman out of the format.

Mozaki Mage is dying under the pressure of the lopsided Poison Rogue matchup.

Handlock is also discouraged due to the rise of Poison Rogue.

Demon Hunter is dying out. Fel DH is very poorly positioned against Poison Rogue and Ramp Druid. These decks’ rise in play is destroying whatever is left of the class.

Paladin gets progressively weaker (as seen in recent reports) and less popular as you climb ladder.

Warrior behaves similarly to Paladin, but the trend is far more extreme and dramatic. 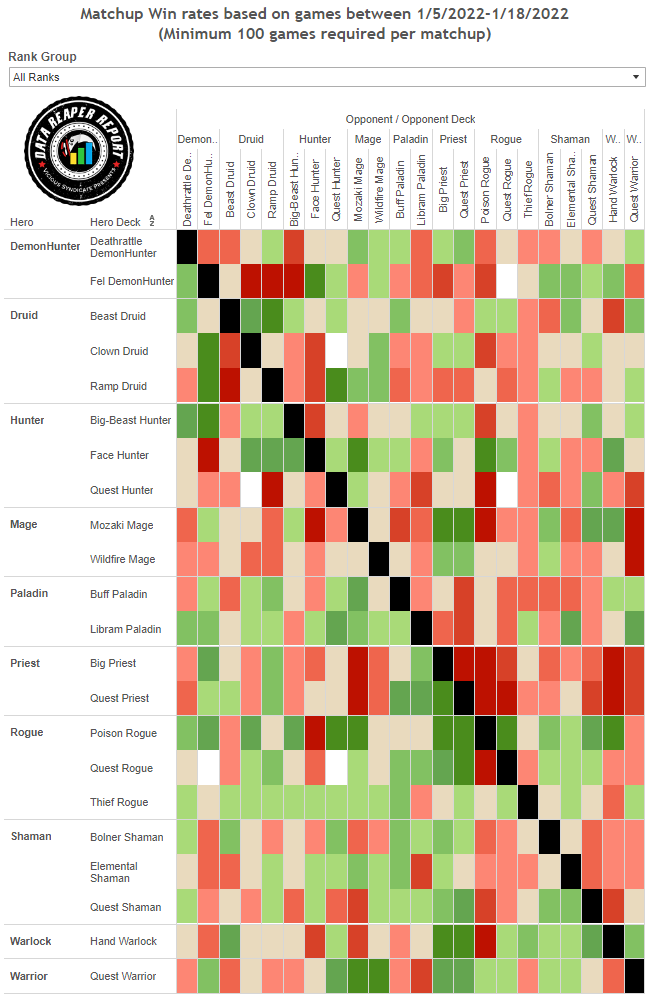 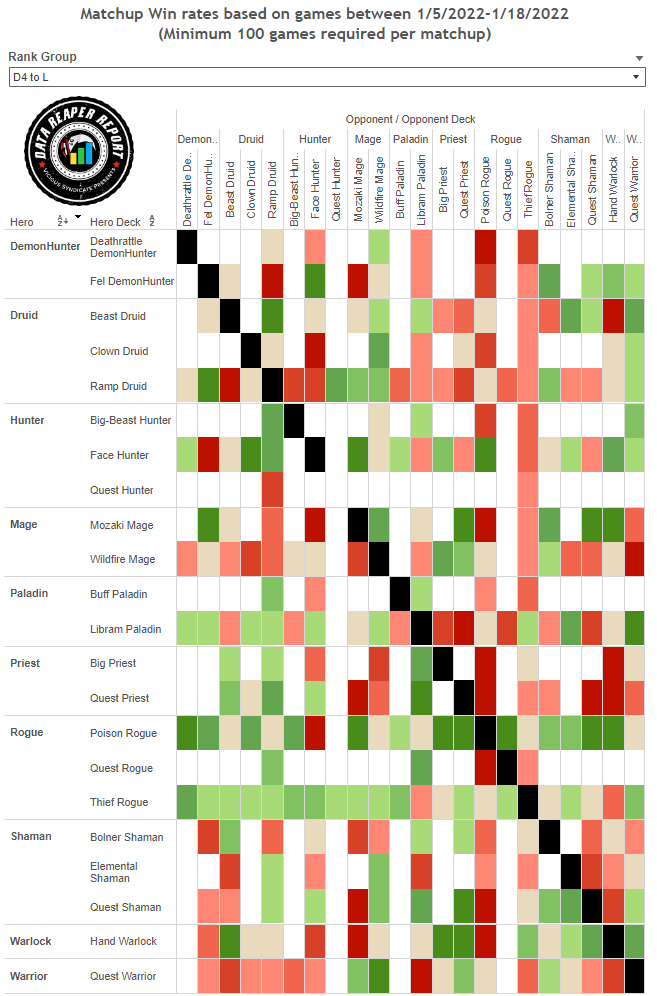 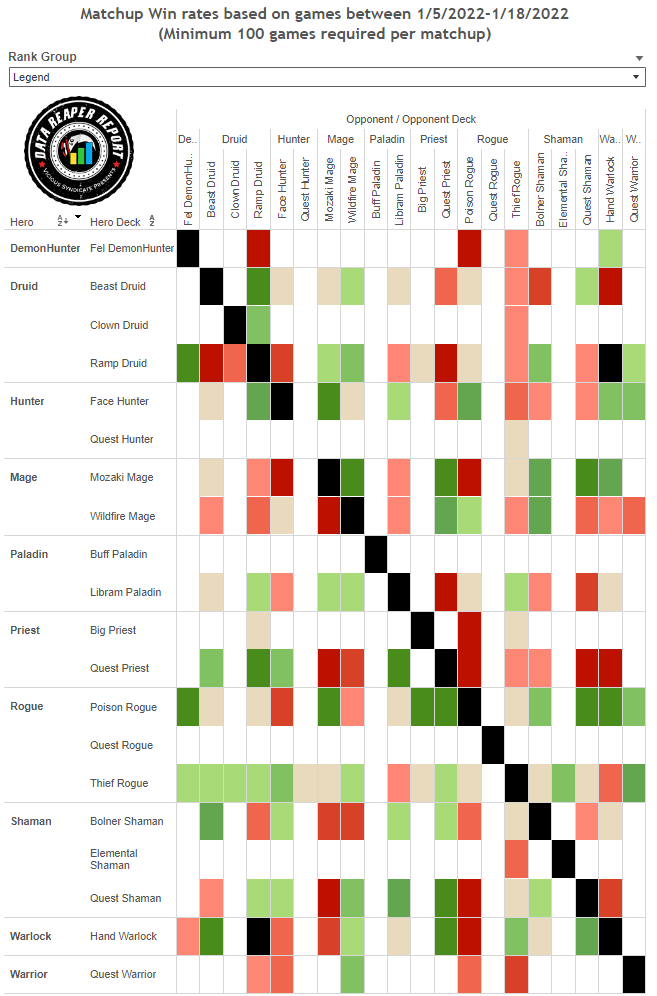 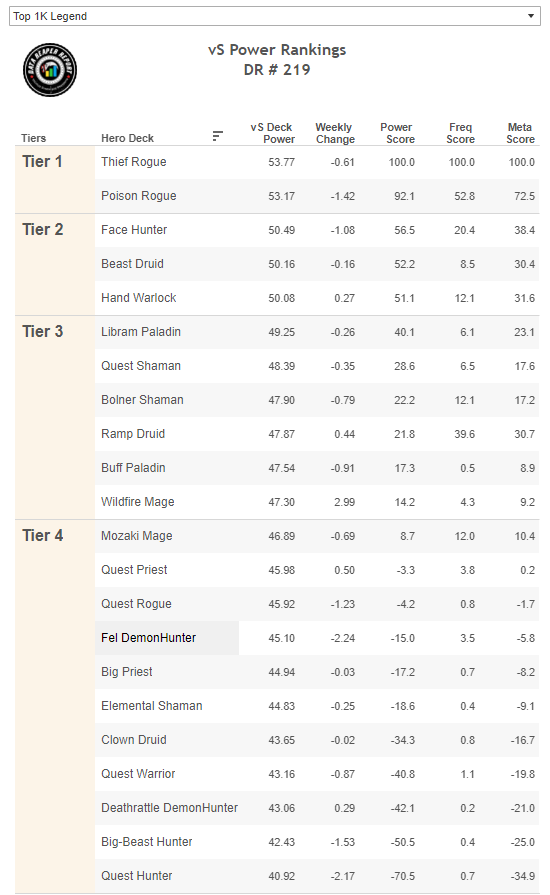 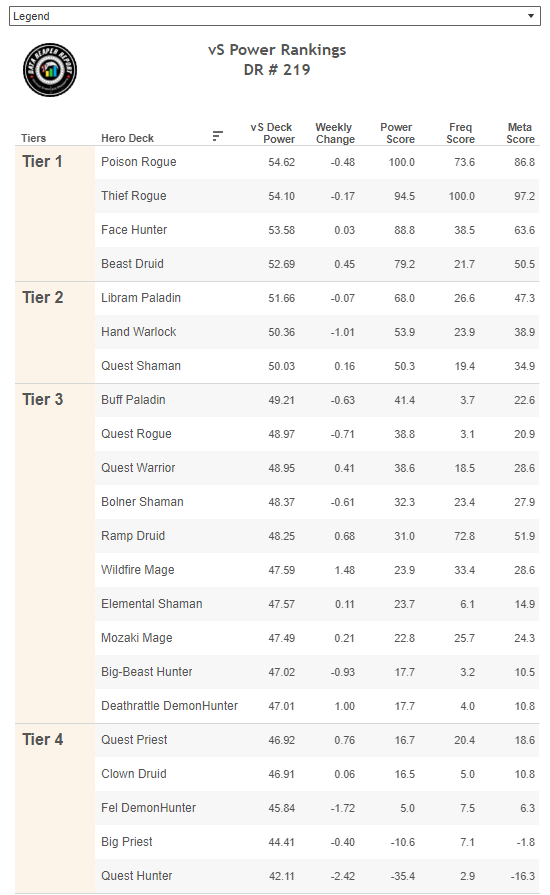 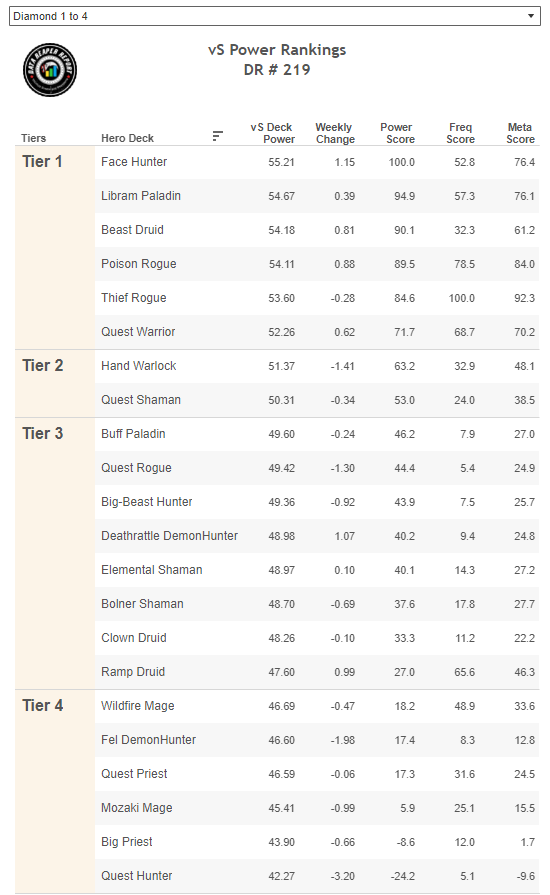 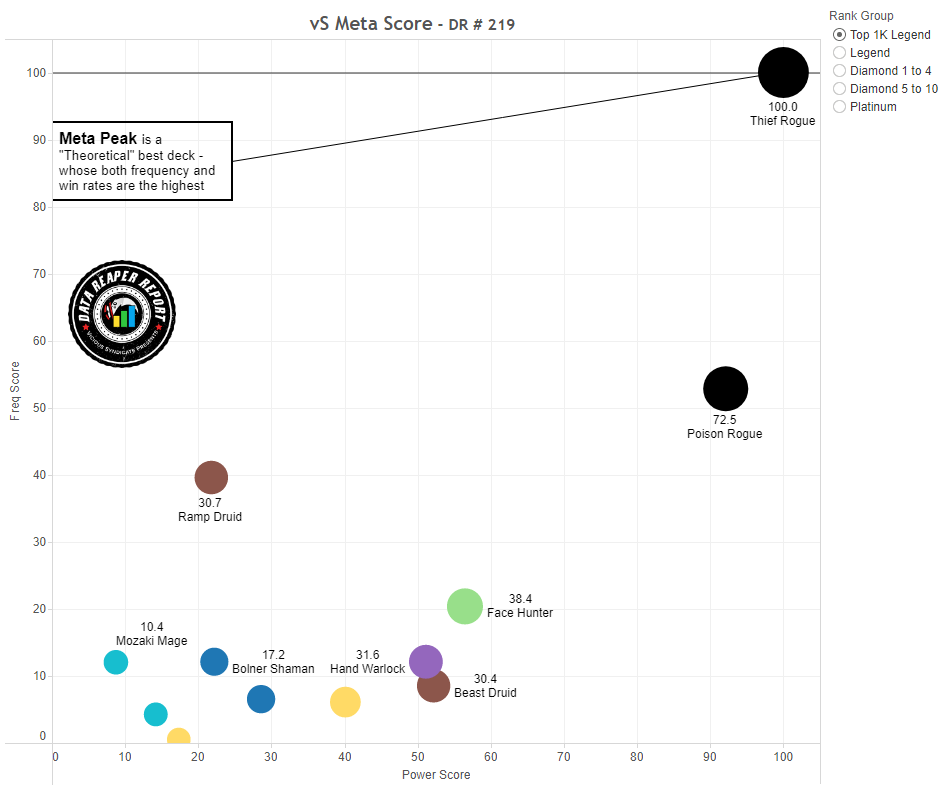 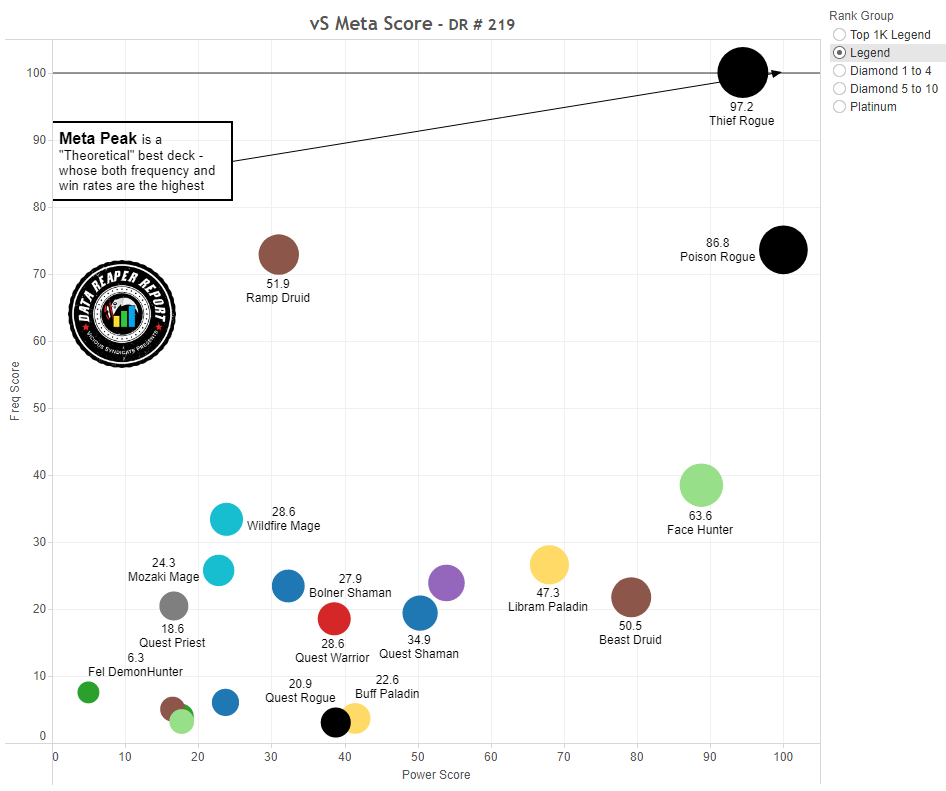 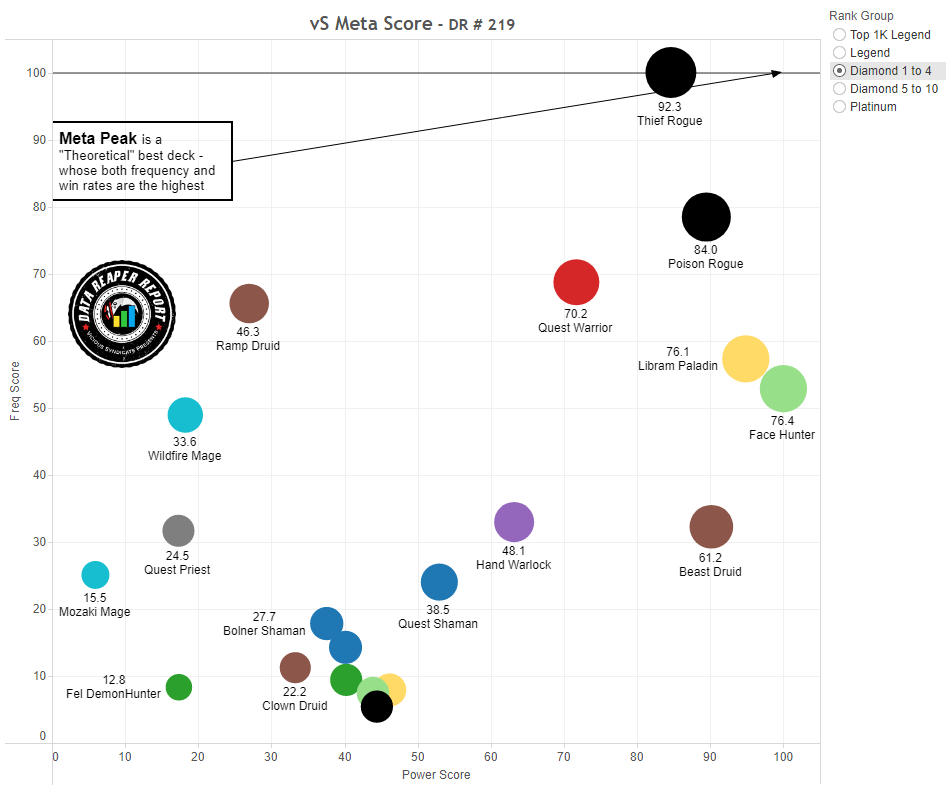 In case you’ve lived under a rock for the last couple of weeks, Rogue happens to be overpowered. The featured builds of Thief Rogue and Poison Rogue are perfect. Viper is a consideration to replace a SI:7 extortion in both decks, mostly at top legend if you’re seeing a lot of Poison Rogues. Abuse these decks while you still can.

Beast Druid is one of the only decks that can somewhat survive in this format successfully and may get even better after the patch. Ramp Druid is very popular, but not very good. It feels new, fun, gets a lot of streamer exposure and what else are people going to play besides Rogue? Lots of space should generally open around the class once Wildpaw Gnolls are weakened, so expect to see lots of Wildheart Guffs after the patch, at least initially, but we don’t think it will be as strong as some expect it to be.

Face Hunter is the best non-Rogue deck you can play on ladder, and it might not have reached its final form just yet. Beaststalker Tavish started to appear in the archetype’s cluster, and it looks very good. What sells us on the card in the current meta is how good it is against Rogue. It’s also very powerful against Shamans and other Hunters. Try it and you probably won’t regret it. Expect this deck to continue to sit around the top performers after the patch.

Shaman has been destroyed by the Rogue oppression, but the good news is that we expect the class to return to form after the balance changes. Specifically, Bolner and Quest Shaman should be very strong after the patch. The diverse pack of Shaman decks that disappeared under the weight of Gnolls and Scabbs could get a 2nd chance as well.

Mozaki Mage can make the Poison Rogue matchup more winnable by running double Ice Barrier and Rustrot Viper. Yes, Viper looks like a legitimate choice in this deck considering that all that prevents Mozaki from displaying a very good win rate at higher levels of play is this one oppressive matchup.

Wildfire Mage is surprisingly one of the better decks to queue into Rogues. Running two Vipers in the Rune variant makes the Poison Rogue matchup around 65% favored! The combination of weapon disruption alongside the Mask/Parrot/Varden package, which can deal damage through Cloak of Shadows, is a potent one. The Thief Rogue matchup for this build is close to 50%, so the math checks out if you consistently run into Rogues. The deck’s main problem in the current format is the inflated play rate of Ramp Druid. It will have to adjust after the patch.

Handlock is another deck that’s surviving relatively well in the current meta. We expect it to become one of the stronger decks in the format after the patch. Its hardest counters should be significantly weakened and a rise in the Druid/Shaman pairing could make up for the likely decline of Thief Rogue.

Paladin’s position in the meta isn’t necessarily getting better after the patch. Libram Paladin will be hoping for a diverse field to emerge, while watching out for the Shaman population. The more Bolner and Quest Shaman it meets, the worse the Paladin class becomes. Another thing to look out for is whether Quest Rogue makes a return. Paladin is very unlikely to become a genuine balance concern since many of its counters will be getting stronger.

It’s hard to see how things could possibly get worse for Demon Hunter. Fel DH has been completely obliterated by meta developments over the last three weeks. Rogue nerfs would be very welcomed. Poison Rogue is an awful direct matchup, while Thief Rogue pushes out aggressive decks that Fel DH does well against.

Ramp Druid is another very tough matchup, which doesn’t bode well for Demon Hunter considering that it seems to see more play than it generally should, but there are plenty of decks that should keep Wildheart Guff in check. If Shaman becomes a dominant class, Illidan should be able to find more joy in the format than he currently does too.

Warrior’s prospects are generally grim. Quest Warrior could be paying for the sins it’s committing in Wild and other Warrior decks look nowhere near playable. The class desperately needs help with new cards.

Miracle Priest should love the patch. The deck wants to see less of Shadowcrafter Scabbs more than anything else, and if the field continues to overplay Ramp Druid, it should have an easy time farming them.

We’re less optimistic about the prospects of Big or Quest Priest. Late game lethality should still exist in spades, which means Priest’s grindy playstyle is unlikely to become effective enough, but perhaps Quest Priest can exploit a high Druid play rate to get stronger results.

The last couple of weeks have been difficult to follow. There aren’t many insights to derive from a format that’s completely choked out by a single class. We’re looking forward to the next meta, which will hopefully allow us to produce the thorough writeups you’re used to find on this website.

See you on the other side.