Welcome to the 240th edition of the Data Reaper Report! 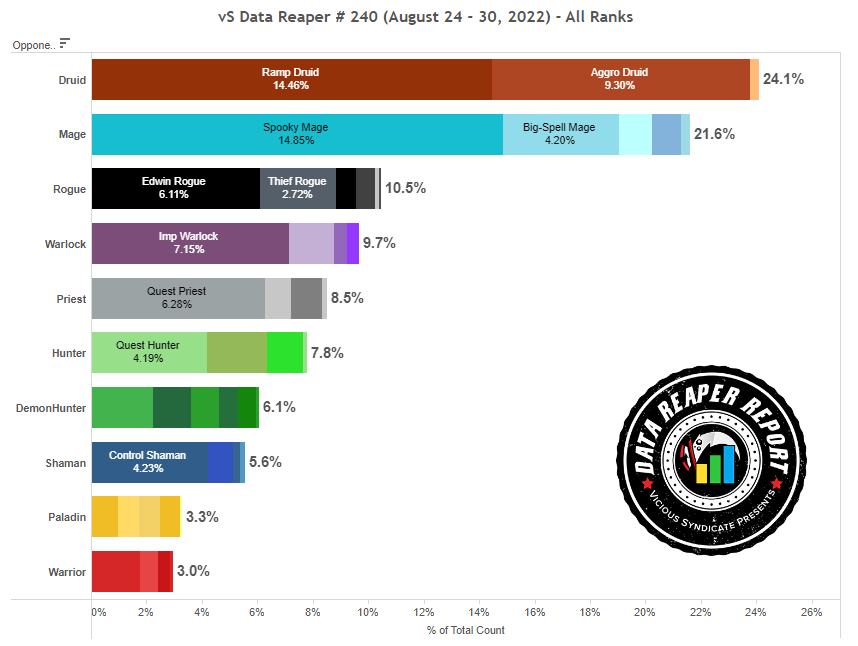 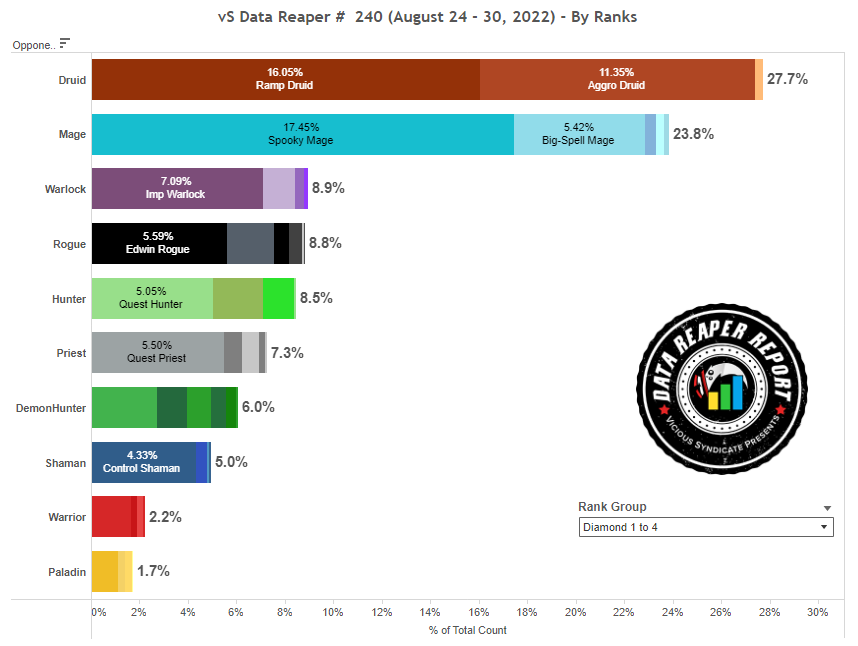 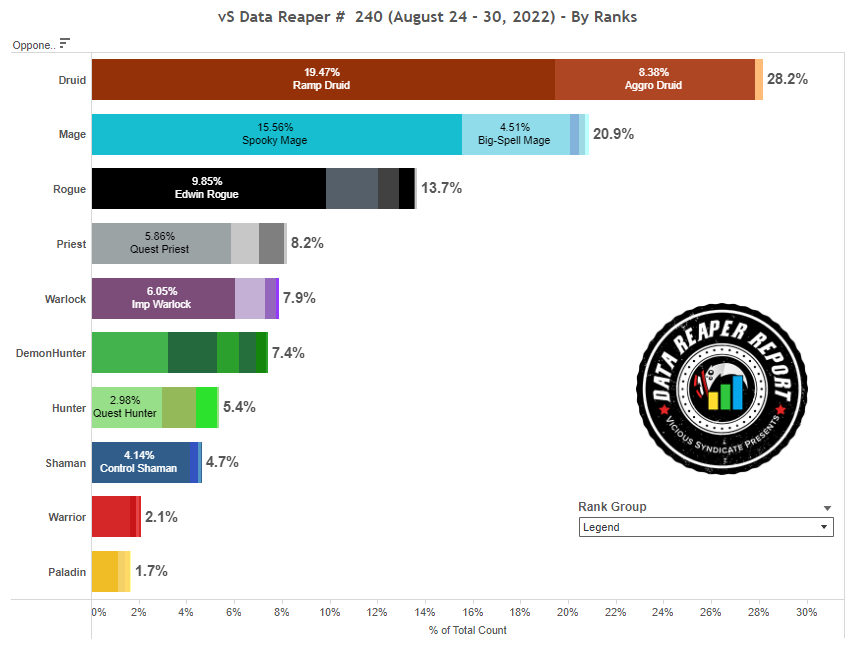 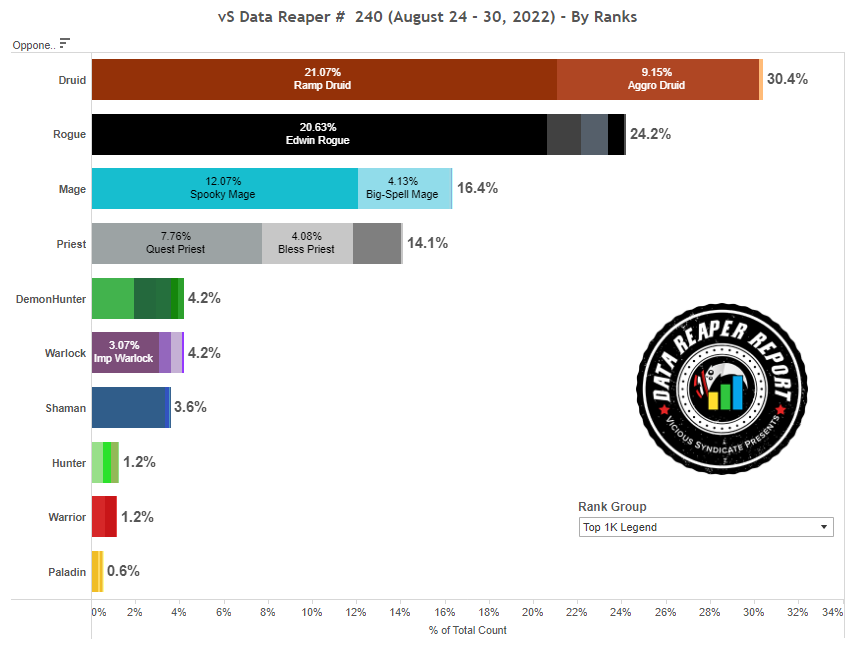 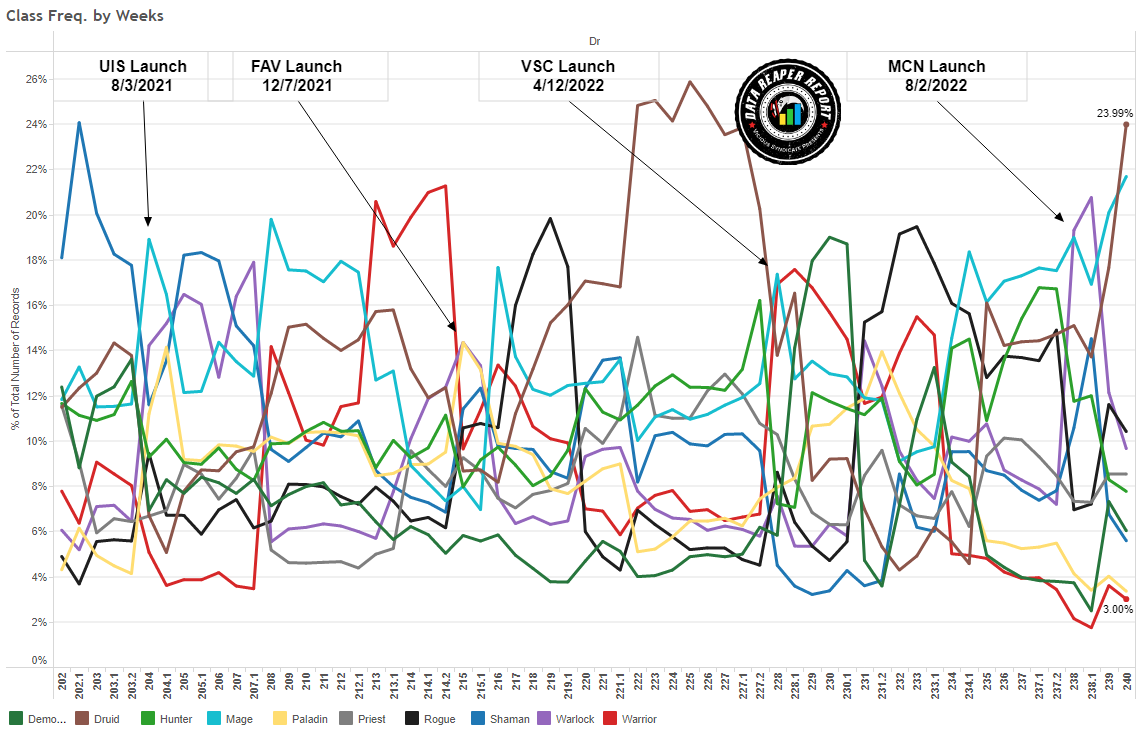 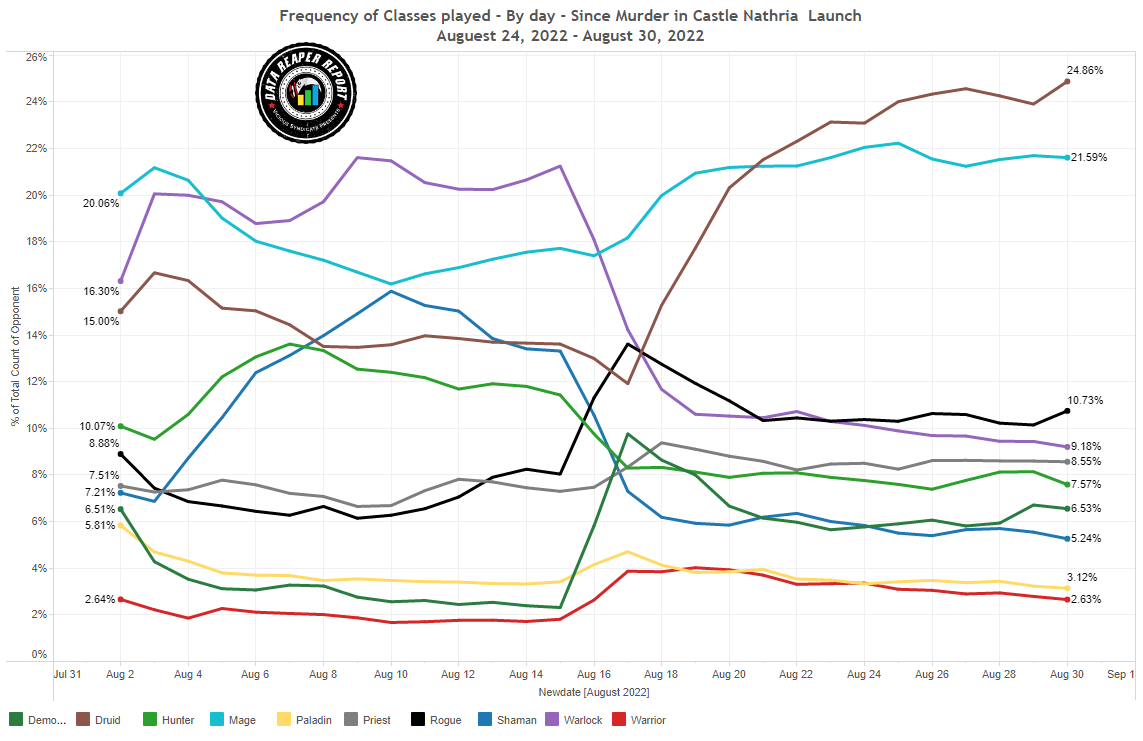 We did warn you it was going to get worse. Before we dig a little bit into each class, the bigger meta picture is astounding:

Druid and Mage combine for around 50% of the field from Diamond 4 to legend (outside Top1k).

That number slightly drops to 45% from Platinum to Diamond 5, and 40% at Bronze through Gold.

The main development in Druid is the rise of Aggro Druid across all rank brackets. It is now one of the most popular decks in the game, and yet it is still dwarfed by Ramp Druid’s presence.

Edwin Rogue has significantly declined in its numbers at every rank bracket outside of top legend. We know this deck is difficult to play and doesn’t perform as well at lower ranks (though it still performs well), so after the initial enthusiasm surrounding the Edwin buff, players outside of top legend have opted for other, less stressful choices.

No signs of Mage’s popularity slowing down. Spooky Mage is an extremely common opponent throughout ladder, while Big-Spell Mage has also become more visible, with some players experimenting with Renathal builds.

Priest has risen in play at top legend while not moving much outside of it. The class serves a role in countering Rogue with either Quest or Bless Priest but isn’t as useful in a meta that isn’t saturated with Rogues despite Quest Priest’s good matchup with Aggro Druid. The high prevalence of Mage and Ramp Druid on the climb to legend makes it tough for Priest to succeed.

Every other class, without exception, is going through a decline in play across multiple rank brackets. Warlock and Shaman are dwindling. Players are abandoning Demon Hunter after the initial hype. Hunter exhibits a glaring decline that now makes it as popular as Warrior at top legend. Warrior and Paladin look completely irrelevant.

The format is quickly headed into a dead end, with most classes showing no internal developments. The meta is very narrow no matter where you are, but the fact that most experimentation starts at top legend, and that top legend players only play 4 classes, means that other classes are not seeing any novel or exciting new builds, so we won’t have anything to say about them in their class sections. We’re 4 weeks into the expansion, and the player base is just about done exploring new possibilities in 6 classes. That’s concerning. 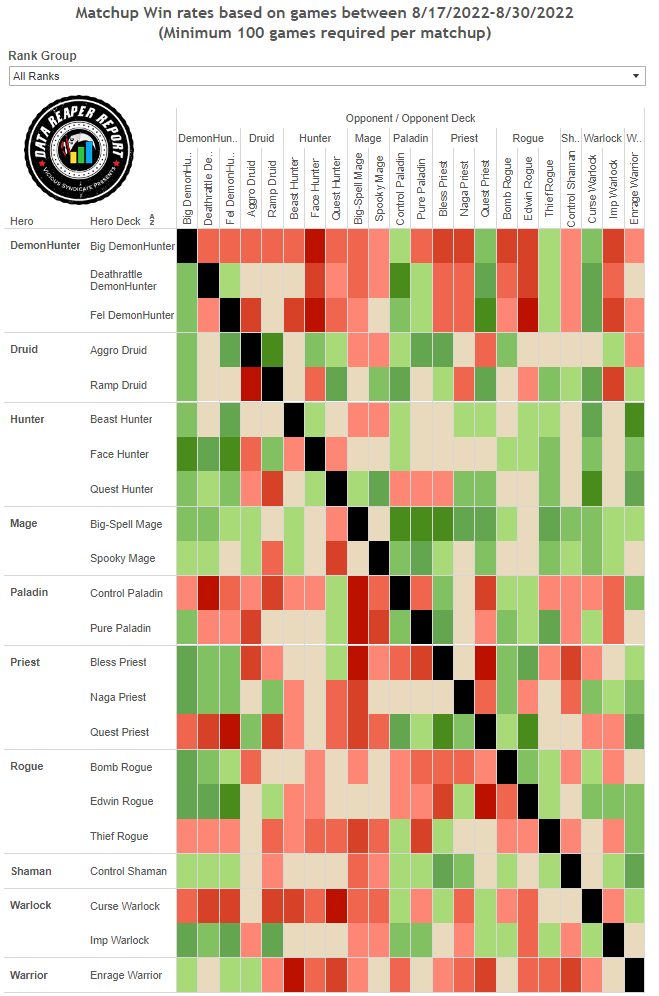 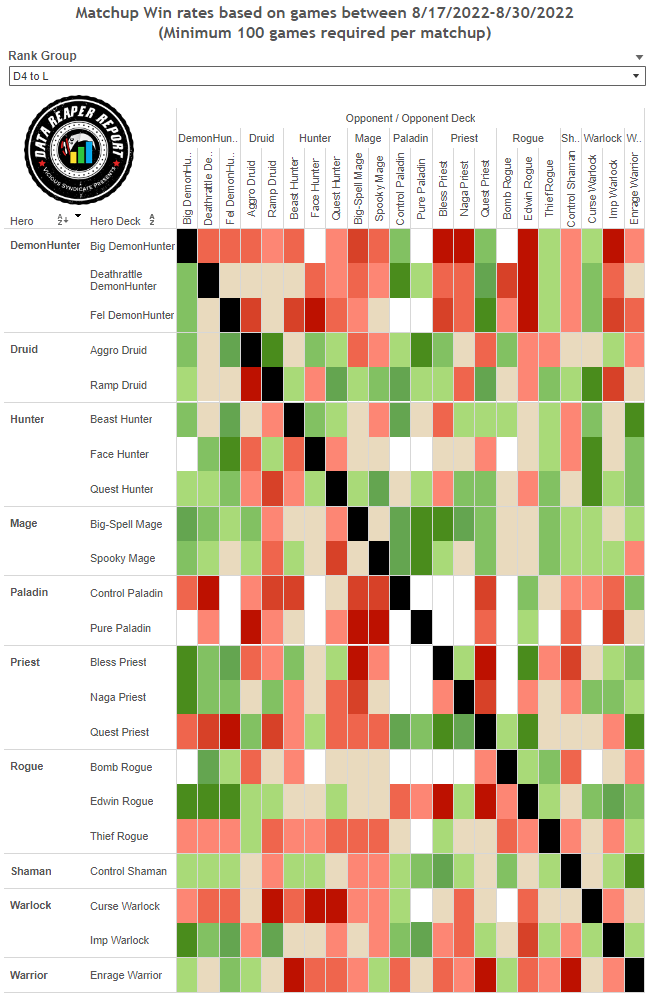 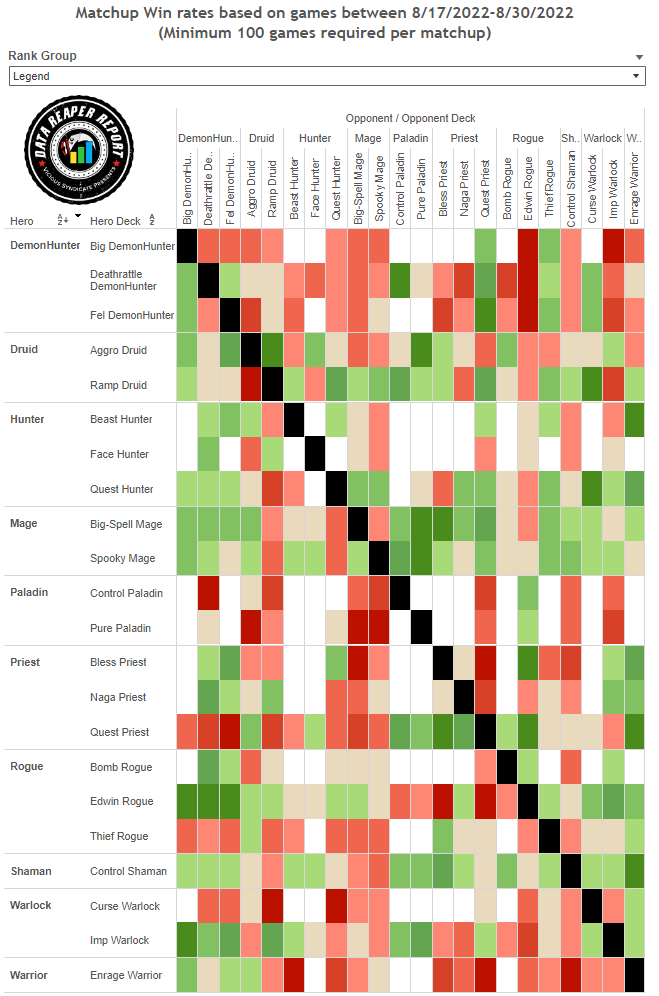 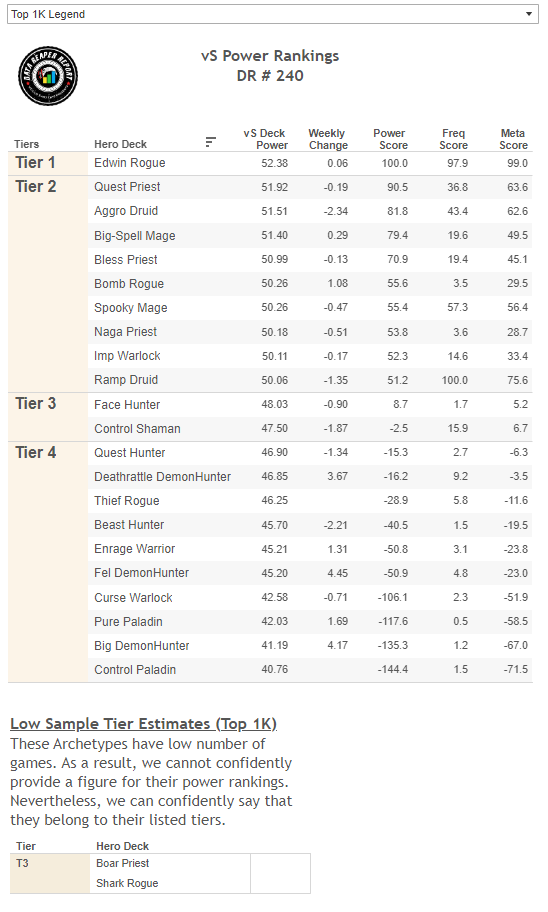 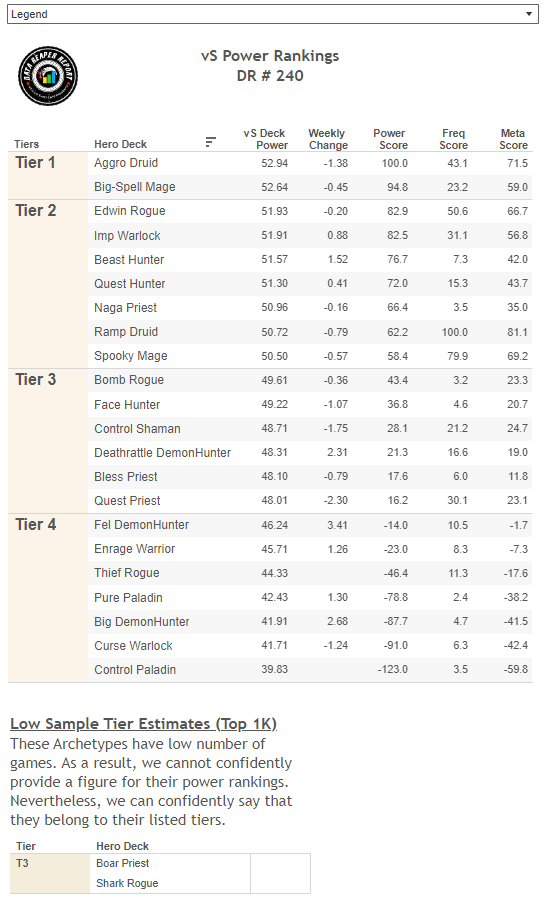 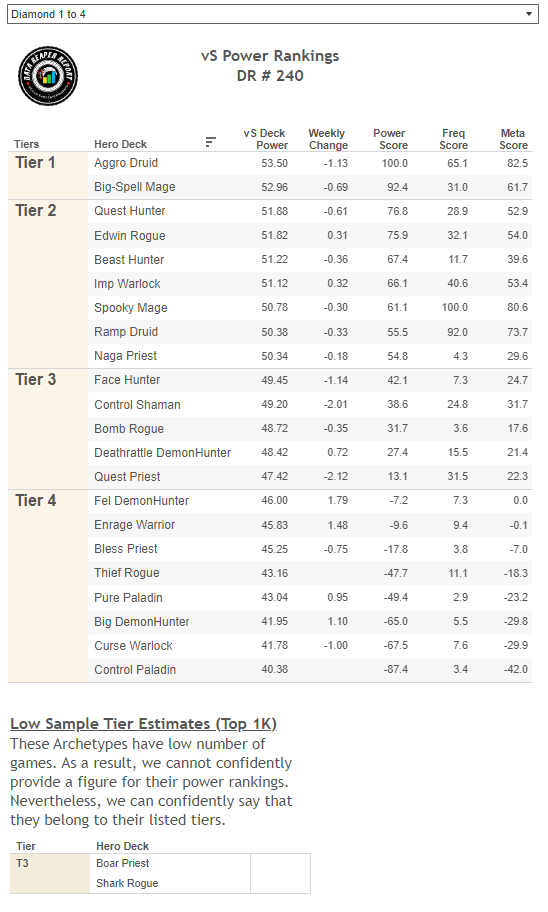 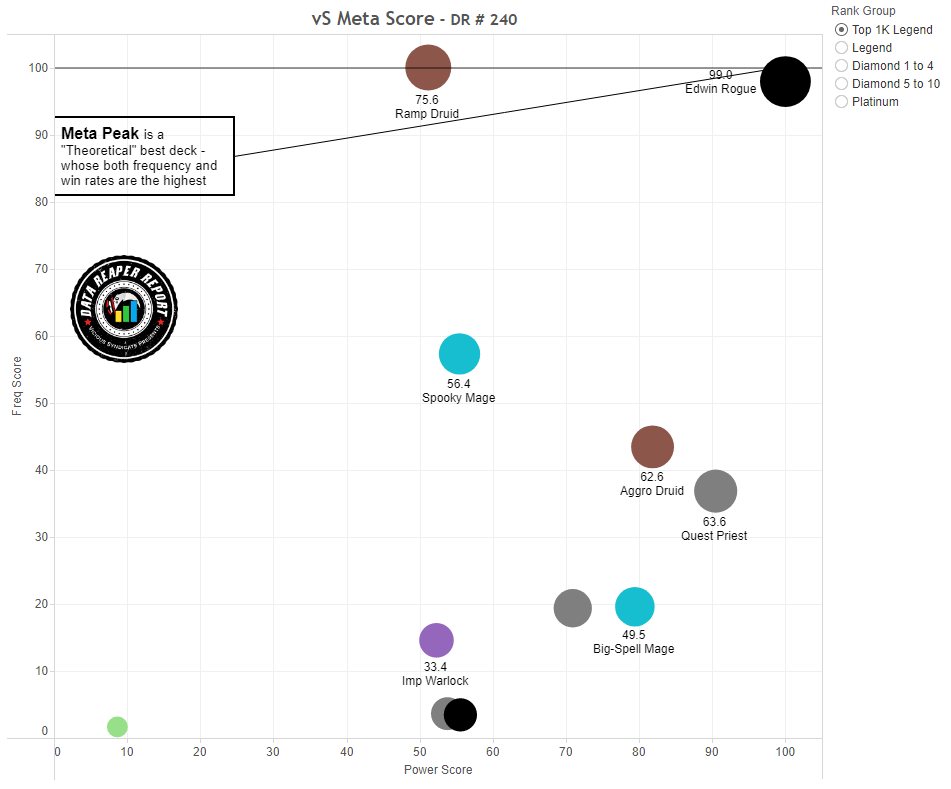 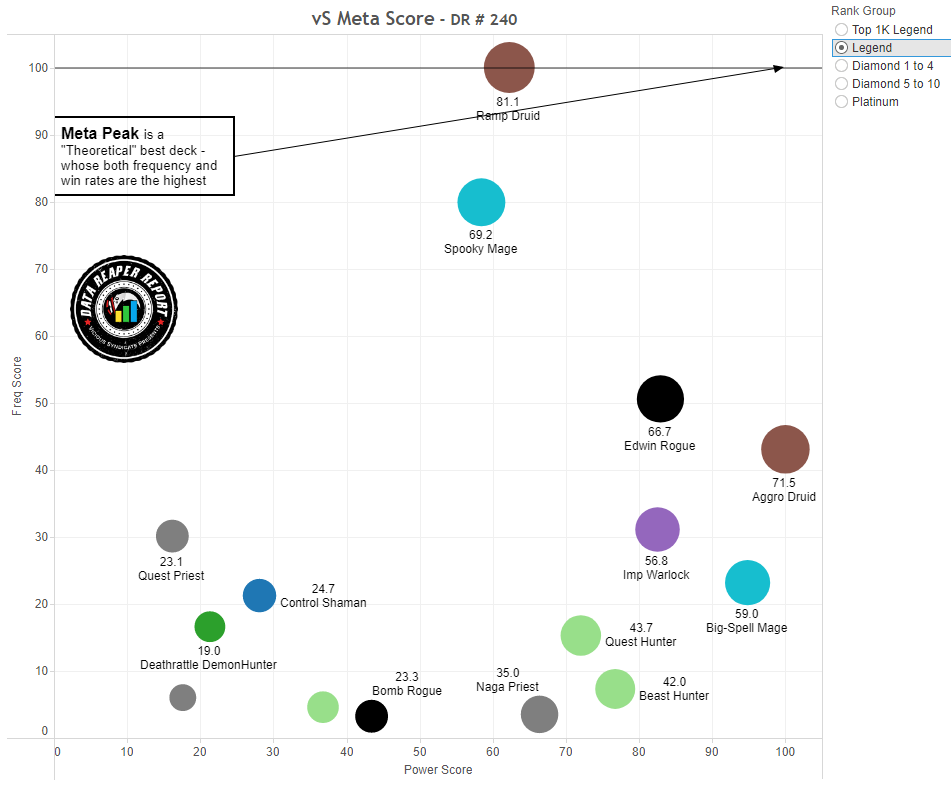 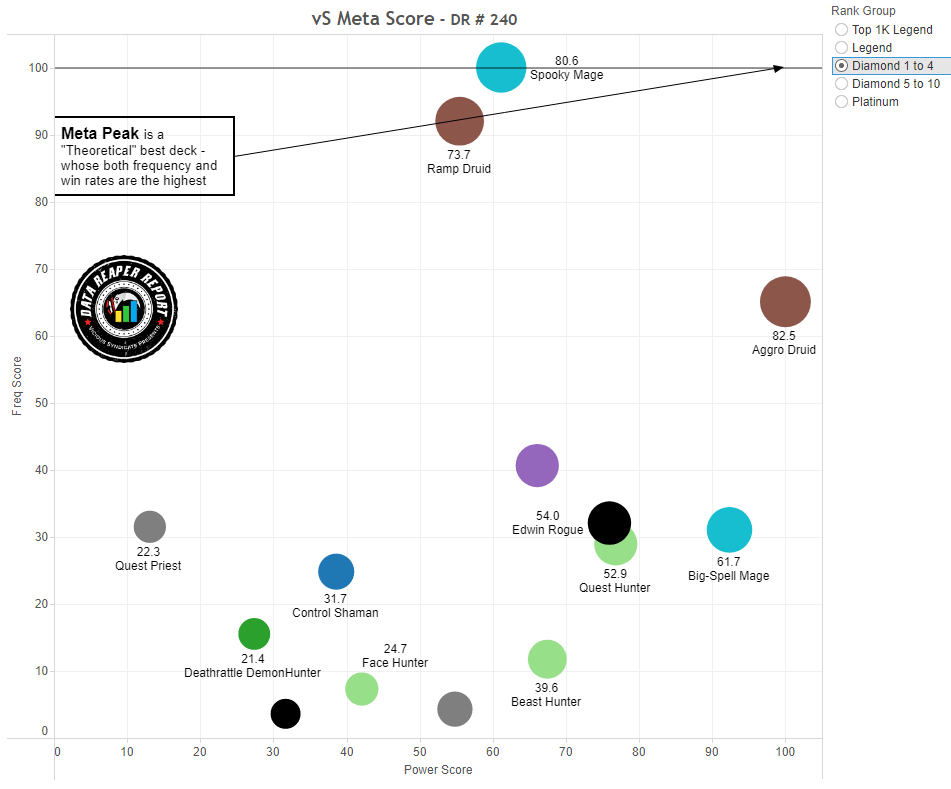 Ramp Druid has a ‘perfect 38’ list. Kelpkeepers are the most cuttable cards in the deck. You can run 2nd Starfish, 2nd Oracle, Battlemaster or Spammy Arcanist in these slots, depending on your preferences and certain matchups.

Aggro Druid is settled. We’ve seen players swap Crooked Cooks for Clawfury Adepts. This is a sideways move and doesn’t really affect the deck that much.

Edwin Rogue is settled. We’ve noticed the other Miracle Rogue deck, Shark Rogue, improve its performance over time, though it’s only seen at top legend. This is the hardest deck to play in the format, but its ceiling is still well below its counterpart.

Though the meta isn’t diversifying, Mage as a class is finding new things to do within its two archetypes.

30 Spooky Mage is showing good results by running a very low curve, cutting Deathborne and adding Frozen Touch. Commander Sivara is only good in theory in this deck. This build performs much better against Ramp Druid, and slightly better against Quest Priests and other Mages compared to the Renathal build, but it’s worse vs Rogue and aggressive decks.

XL Spooky Mage is experimenting with cutting Kael’thas and Denathrius for Multicasters. This looks effective, as the extra draw consistency means your primary win condition comes online more often. We recommend the switch.

Renathal has never worked well in Big-Spell Mage, but recently it’s been producing results that are competitive with the 30-card version. We like the Gorloc Ravager package, as it allows you to find Finley and dig deeper into your deck, meaning you can find your key cards more often. This is the first deck we don’t mind seeing Murloc Holmes in, since it’s a decent target for Ravager.

The Renathal build is much better against Aggro Druid, which is the reason why it is now a competitive alternative in the archetype. It is worse against Ramp Druid, Mages, and Priests and there is no difference against Imp Warlock, Edwin Rogue, or Control Shaman. This means that unless you run into a significant number of Aggro Druids, non-Renathal would still be the way to go.

The tweaks we’ve made in Quest Priest last week have helped Netherdrake a lot, though we’ve been looking for ways to add back ‘The Light! It Burns!’ since it’s a good card in the deck. The 2nd copies of Lightbomb and Condemn make the most sense. Lightbomb and Shadow Word: Ruin serve similar roles, but Ruin is stronger. Condemn isn’t that relevant even in the Aggro Druid matchup since by the time you get to turn 5, the Druid is already buffing its minions out of its damage range. The important board clear on turn 5 for this matchup is Clean the Scene.

The Curse version of Imp Warlock is benefitting from playing slower and more reactive due to the rise of Aggro Druid, so we’ve switched the flexible pieces around.

At high MMR, Rogue is very hard to stop, and despite players’ best efforts, they cannot prevent this deck from being top dog. Priest is too narrow of a counter and too easily punished in other matchups.

Big-Spell Mage is a very good deck on the climb to legend. The 30-card build is the best performer in the class against Ramp Druid, while the 40-card build counters Aggro Druid.