Welcome to the 209th edition of the Data Reaper Report! 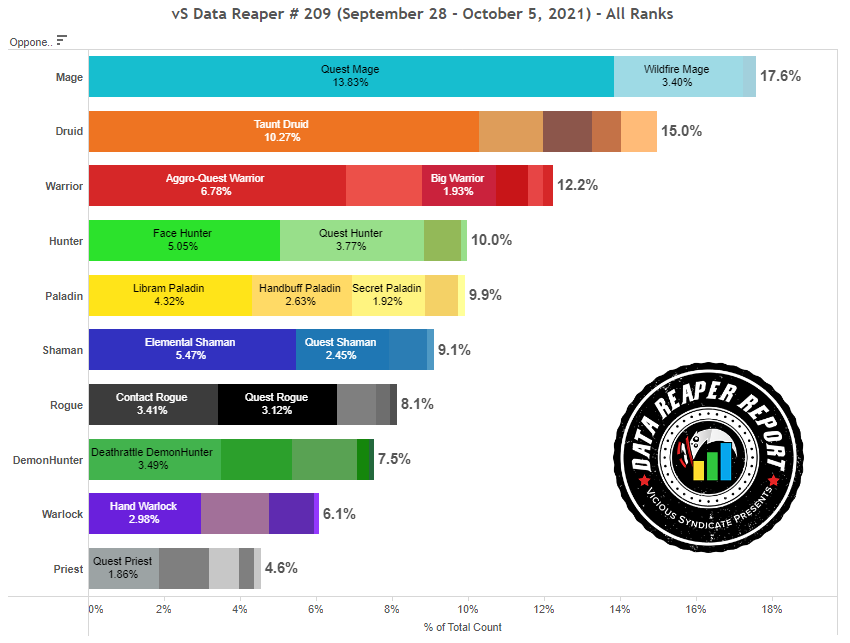 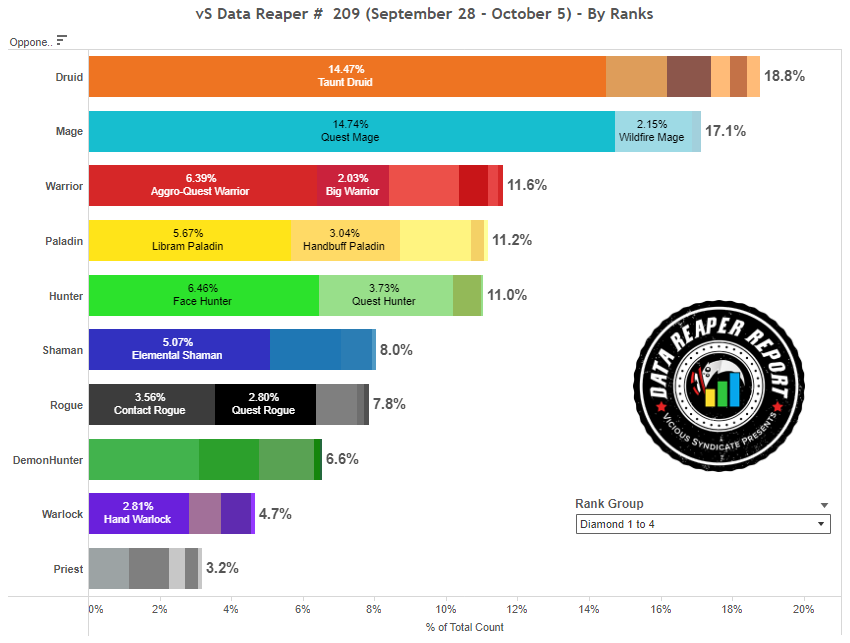 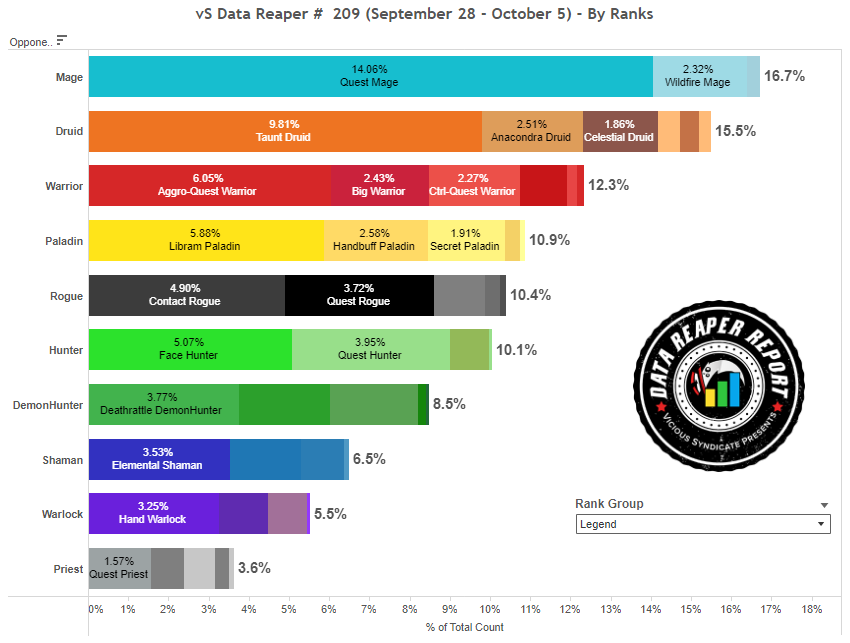 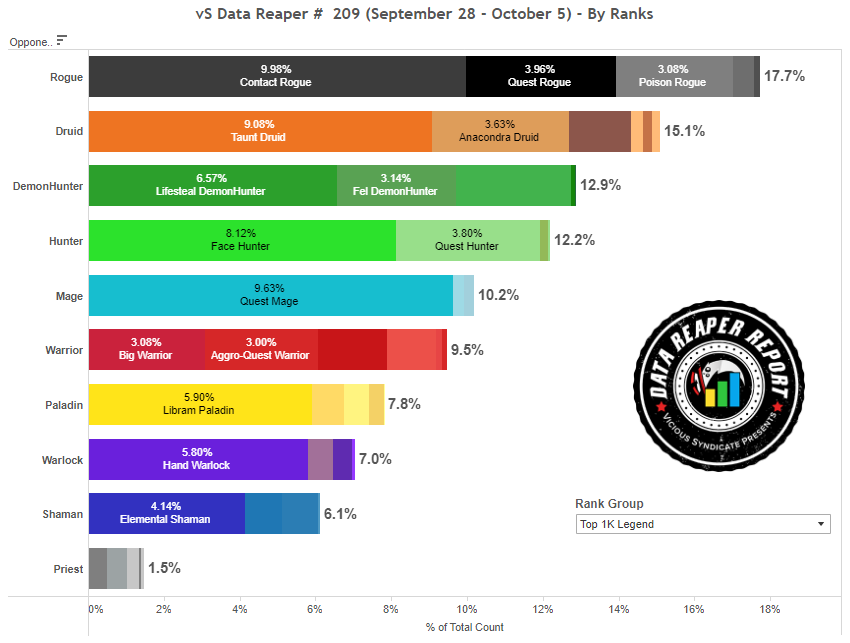 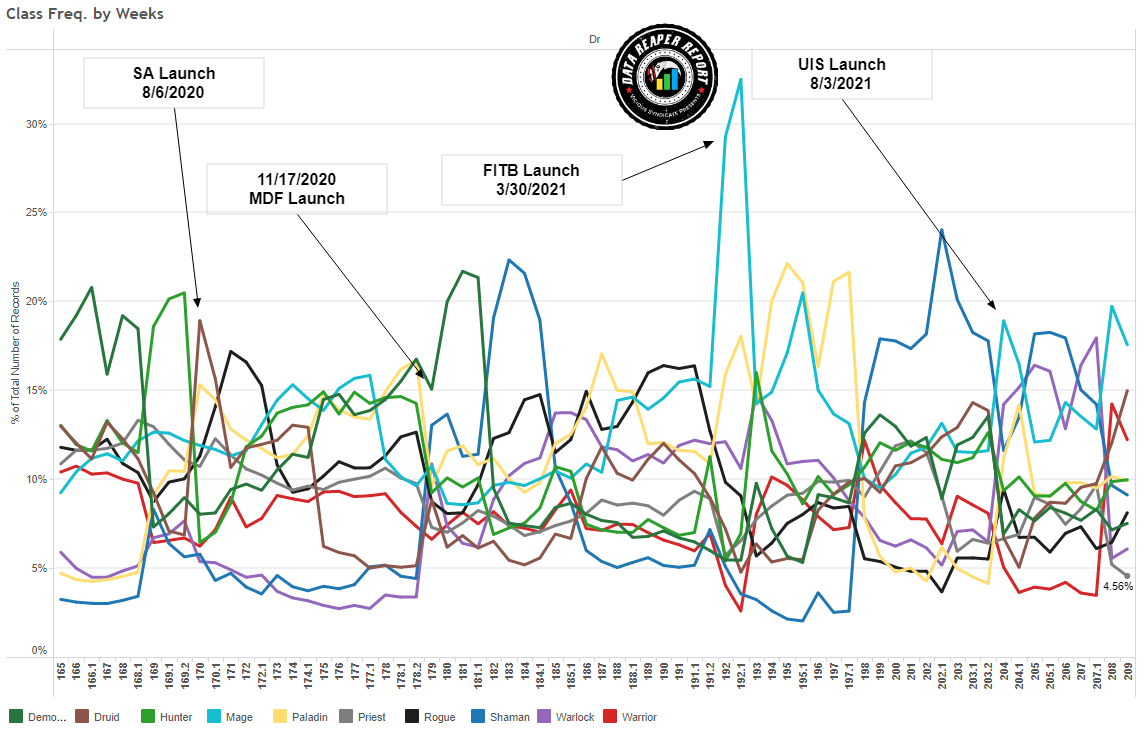 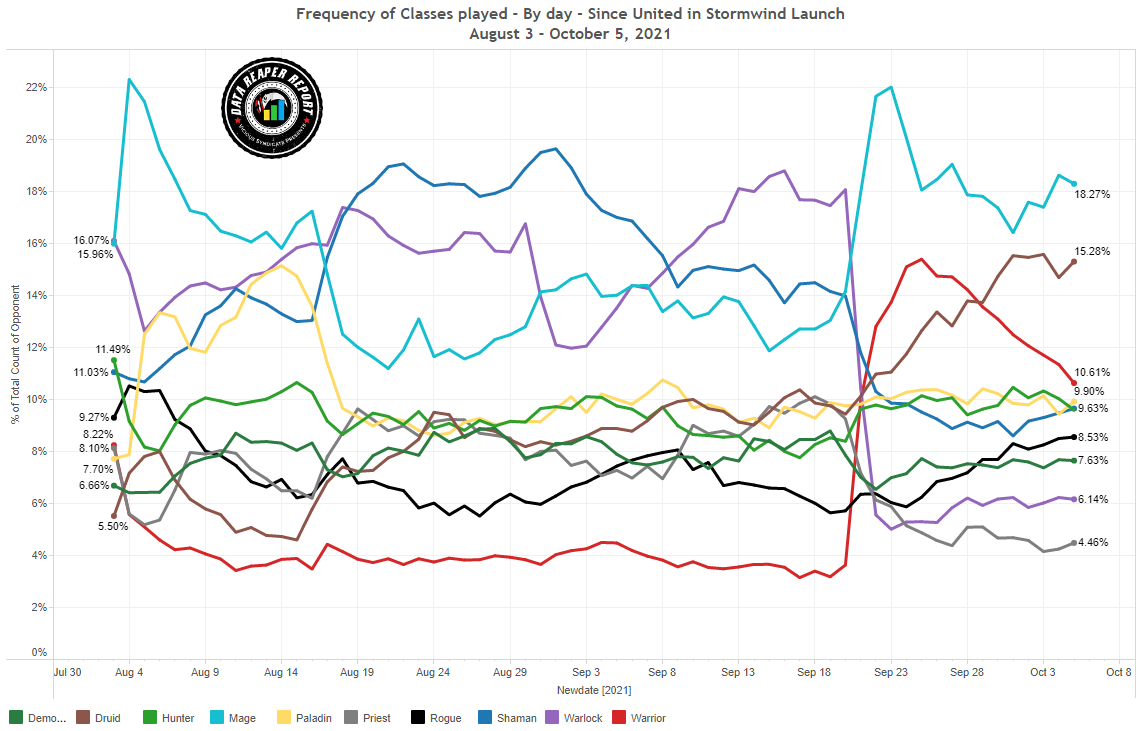 Quest Mage has only risen in play compared to last week. At no point on ladder does it exceed 15%, but it gets close. At top legend, it’s still under 10%. Wildfire Mage is going away because it’s a pretty bad deck.

Taunt Druid is also rising in play, which was expected considering how well it’s performed after the first week of the patch. There’s still some Anacondra and Celestial Druids but they’re slightly declining.

Rogue is relatively unchanged. The most notable trend is Quest Rogue picking up more play after its recent success. Contact Rogue is the most popular deck in the format at top legend, where Poison Rogue is also more visible.

Deathrattle DH is stable. Lifesteal DH and Fel DH are cleaning up their builds at top legend, but they’re still fairly messy throughout most of ladder.

Face Hunter is gaining traction, and showing a play rate pattern we’re not used to, which is a growth at higher levels. Players tend to think Face Hunter is meant to be a Quest Mage counter, but it’s also a strong counter to Handlock and is influenced by Taunt Druid’s popularity  (its hardest counter) more than anything else. Quest Hunter looks very stable.

The Warrior hype is fading a little. We’re seeing the class decline across ladder, with the greatest fall at top legend, where it’s now under 10%. Aggro-Quest Warrior is the most popular deck, but several defensive archetypes become more visible as you climb ladder due to their strong Rogue matchups: Big Warrior, Control-Quest Warrior, and the latest archetype to pop up, questless Control Warrior.

Libram Paladin is gaining traction at the expense of Secret and Handbuff Paladin. We’re also seeing the secret variant of Libram Paladin re-emerge, so it will be interesting to look into the two different variants later in the class section.

There’s a noticeable rise in Handlock, but it’s not a huge spike in play. It’s likely that the high play rate of Quest Mage has a discouraging effect, but even at top legend, where we saw Handlock perform so well last week, its presence is still fairly modest. Other experiments with Warlock are disappearing.

We’re seeing a similar thing with Quest Shaman, where Mages likely have an effect on the desire to play it. Elemental Shaman is picking up slightly more play and interest. Evolve Shaman still looks fringe. 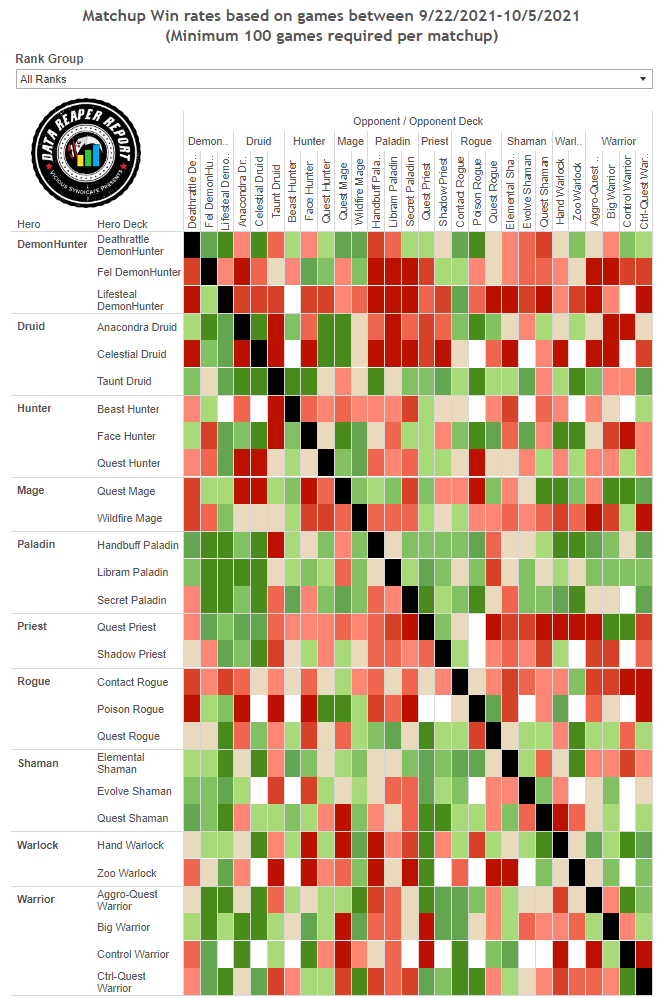 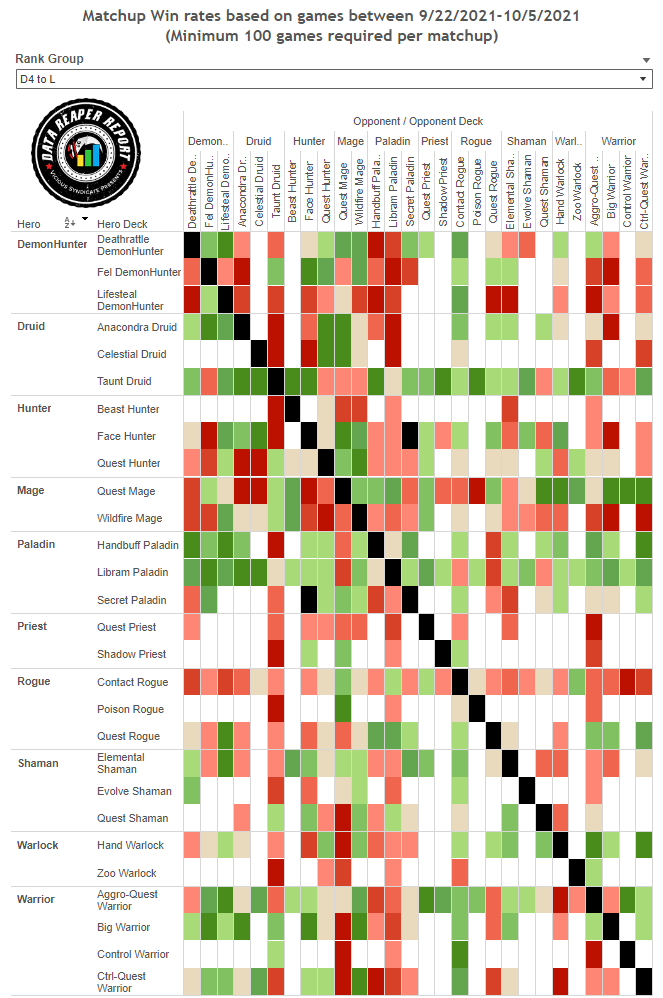 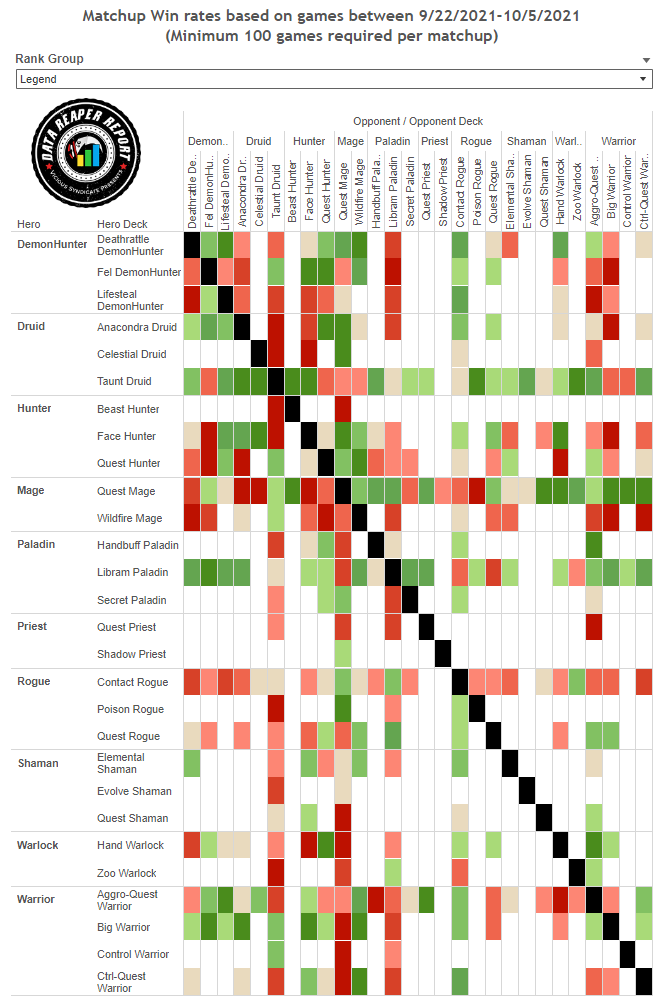 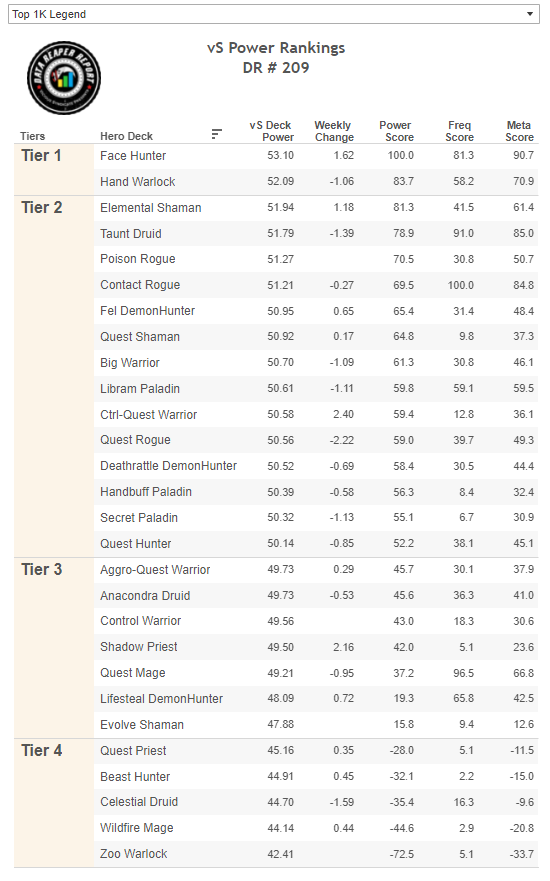 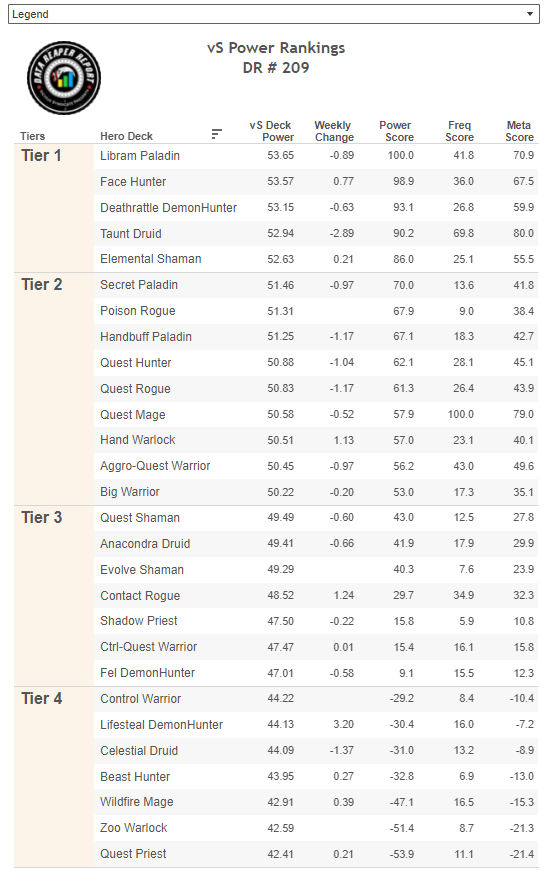 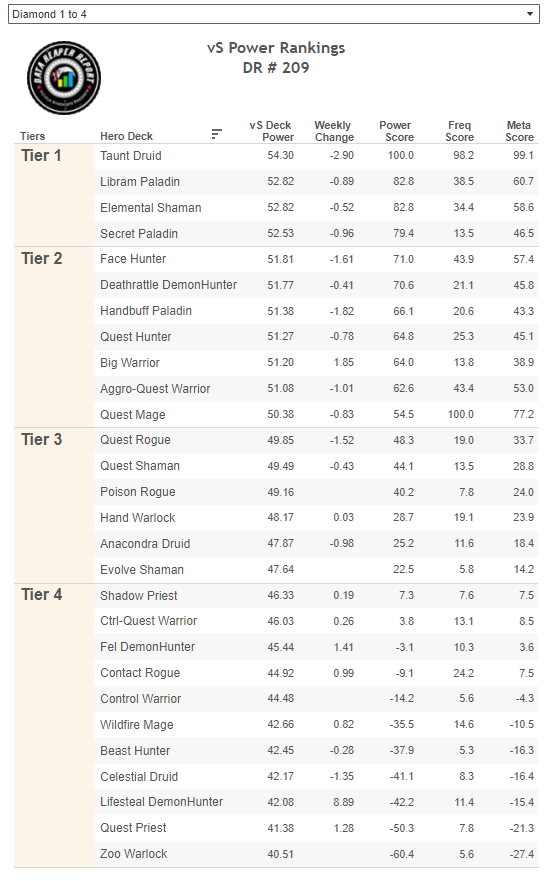 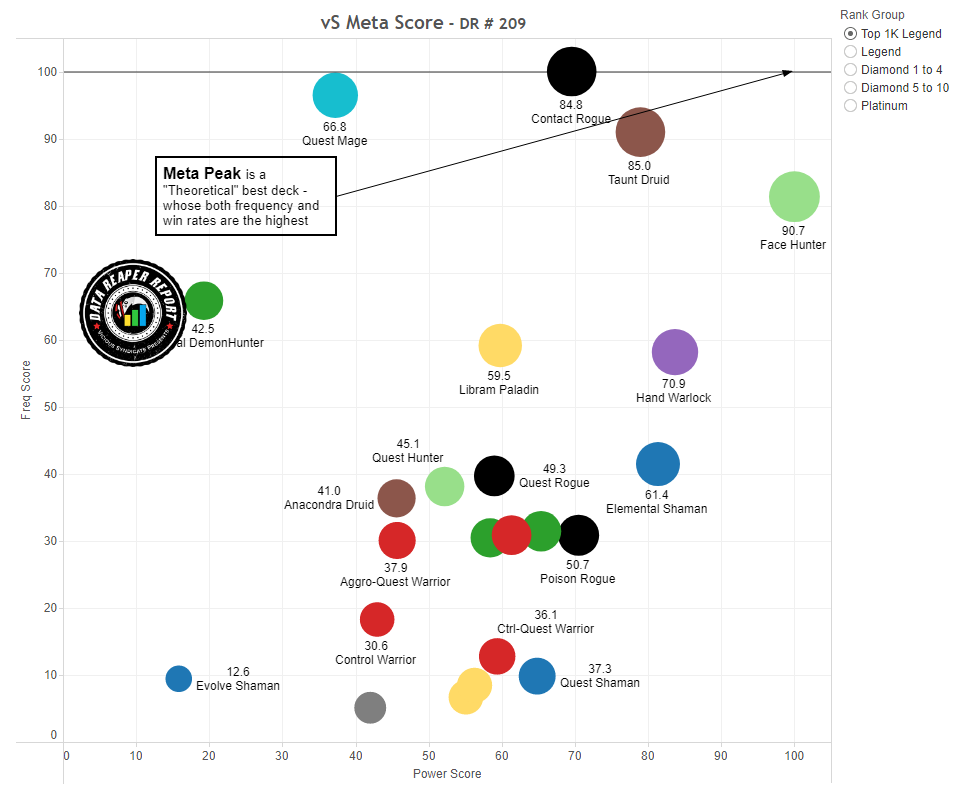 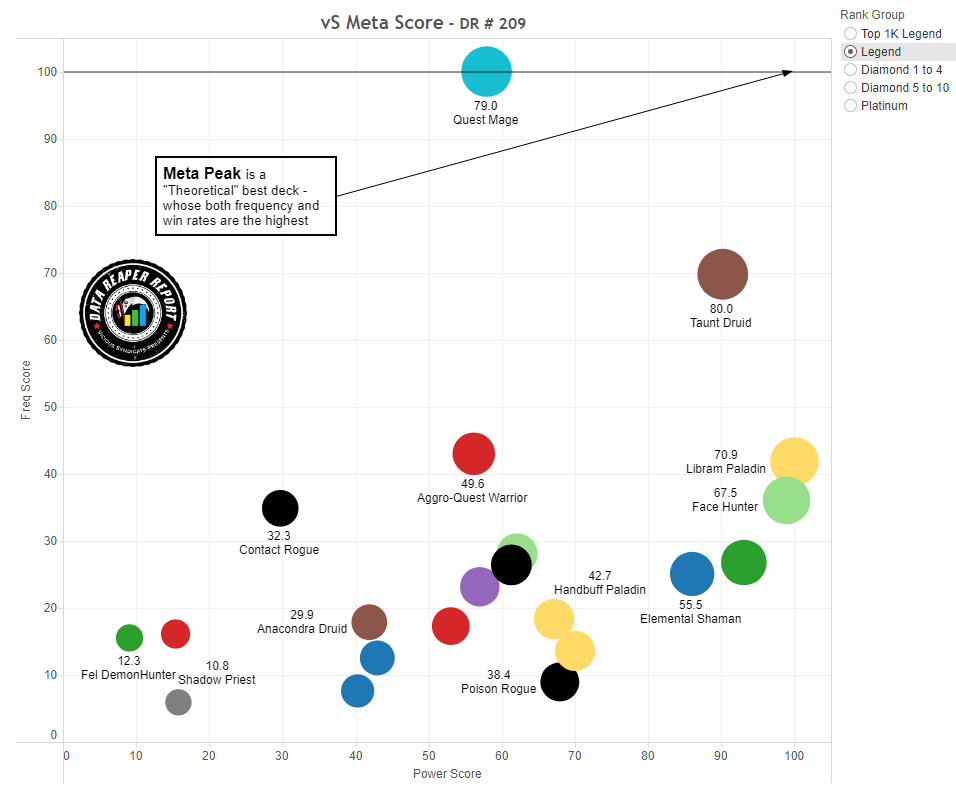 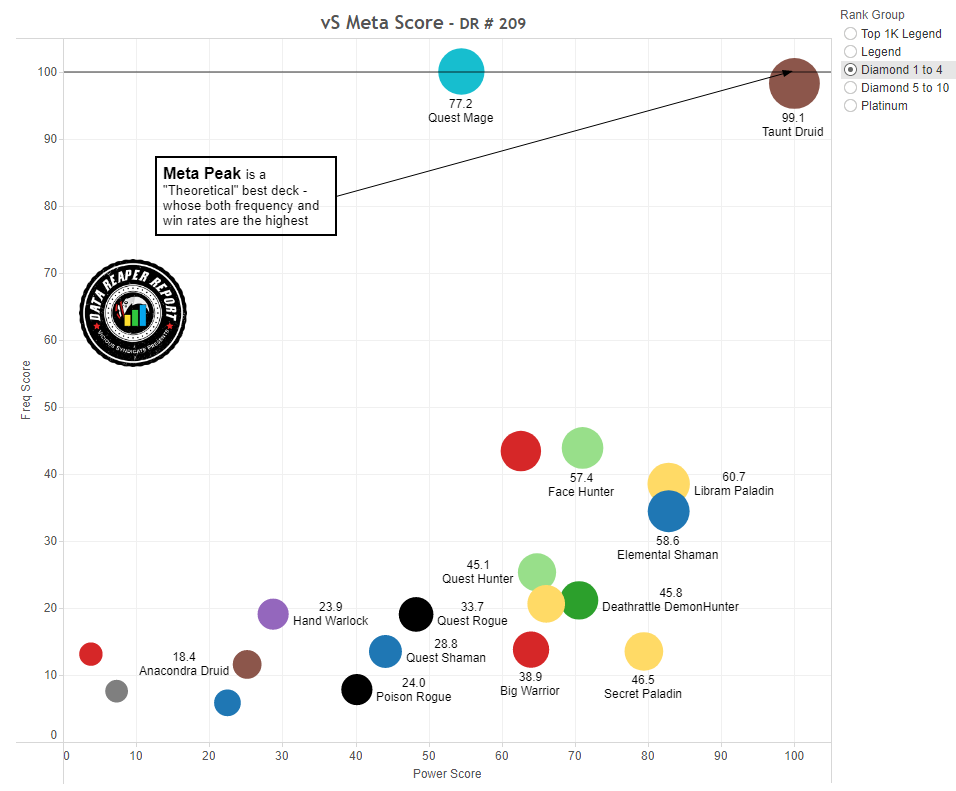 Quest Mage remains widely popular and successful, with the exception of the more hostile top legend meta. We’ve noticed Devolving Missiles pick up play recently and it looks quite good enough to compete for the final slots in the deck. It’s a decent defensive card that can take some pressure off of you. You can still run Apexis Blast, but we tend to prefer cheaper cards when they look worth including. Wand Thief remains relatively underwhelming.

Taunt Druid seems to have two viable versions. Kazakus is looking better every day, since it performs well in the deck’s tougher matchups. As Taunt Druid grew in popularity, we’ve noticed that the field is looking to counter it more aggressively. Decks that counter Taunt Druid tend to sit back more and utilize removal. These are matchups where Panther tends to be weaker and Kazakus can give you that game-changing 5-mana golem that makes your opponents more uncomfortable. Don’t forget that a 1-mana golem can be very powerful in these matchups as well if you land the board buff option.

With that being said, both versions of the deck are equally powerful. Pick what you’re most comfortable with.

There’s a recent trend in Contact Rogue to drop Kazakus for Guild Trader. This seems very strange on the surface, but the purpose of this swap is to increase the consistency and power of the deck’s late-game OTK.

We’ve looked at the pros and cons of Kazakus and Guild Trader, and we’ve quickly understood why this switch is gaining traction at top legend. If you’re running into a lot of mirrors or other late-game matchups where the OTK is your primary win condition, Guild Trader is very useful. Of course, in any board matchup, or against any aggressive deck, you’d very much prefer to have Kazakus but aggressive decks aren’t as common at higher levels of play where this deck is mostly played.

So, the conclusion is that Guild Trader is likely correct for the current meta (this could change again next week). If you’re playing this deck outside of top legend (you kinda shouldn’t), Kazakus is better.

There’s a growing argument to drop Felosophy completely from Lifesteal Demon Hunter. The reasoning is to make your Double Jumps more consistently hit a quest enabler. After looking into another week of data, we can comfortably say that Felosophy is not needed because you rarely have to use an Artificer early in order to survive, and even if you do, you only need to save one for the late game combo because you’re stacked with spell damage effects thanks to Guild Traders.

Magtheridon is doing amazing work in Fel Demon Hunter. This archetype would look stronger if this build simply took over and pushed out all of the underperforming lists that currently pollute the aggregated data.

Face Hunter looks very strong right now, queuing into a favorable field at all levels of play. The featured build is clean. If you’re interested in a small tech for slower matchups, Guardian Augmerchant is quite good even if you don’t run Bonechewer Brawler. Wound Prey tends to be better in the faster matchups, including the mirror.

Quest Hunter expectedly dropped off a little, but it’s perfectly viable. Explosive Trap is still not popular, but it’s very important. It’s not a card you’re happy to play on turn 2, but there will be plenty of situations where it’s game winning.

Warrior is seeing a lot of development, as the class seems far from figured out.

Big Warrior can either run 3 primary threats or 5 by adding Scrapyard Colossus. There doesn’t seem to be a correct decision, both are equally viable. We just don’t rate Mo’arg Forgefiend.

We were struggling to fill the last couple of slots in Aggro-Quest Warrior until we ran into Troublemaker, and the 8-drop looks like a good fit for the deck. It’s better than Nitroboost Poison by some distance, and helps you close games alongside your quest reward. It’s amazing against other Warriors, and it’s quite useful in a variety of matchups.

Control-Quest Warrior has improved through refinement. We’ve dropped Rattlegore for Mutanus. Rattlegore doesn’t work as well alongside the quest reward in this deck, while Mutanus is very powerful in this version. We’ve swapped Bladestorms for Brawls, which are slightly stronger in this meta. We’ve also added the 2nd Sword Eater. Weapons clashing don’t matter as much as progressing your quest as consistently and quickly as possible.

Control Warrior not running the quest has popped up. Saurfang is a core inclusion for this archetype too.  The deck is stronger defensively compared to the quest build, but its win condition in the late game is much worse.

Another week of data helped us compare the numerous cards that are being experimented within Libram Paladin. Noble Mount might have a small edge over all other options, since it synergizes well with the deck’s established game plan.

But that’s not all, the secret version of Libram Paladin is gaining traction and is also looking impressive. We’re a little unsure about Taelan, and we can see Libram of Judgement being better, but the other 29 choices look very solid.

The secret version is better against slower decks, since you have a better pressure plan. For example, you’re much more effective against Quest Mage and the matchup is around 50-50. But, cutting some of the removal means that faster matchups against aggressive decks, such as Taunt Druid, are usually going to be worse.

Handlock is still looking good, but it’s unlikely to develop into the oppressive force it was before the balance changes. Face Hunter is also growing to become a notable roadblock at higher levels of play.

Build stays the same. There’s some fringe tech being used at the moment, but nothing that makes sense in more than one matchup. Baker is a way to hedge for Face Hunter. Altar of Fire is played to disrupt Demon Hunters. Neither seems worthwhile at this very moment, but we’re paying attention if things change in the future.

There’s not much development in Quest Shaman because of low interest in the archetype and its low play rate.

Elemental Shaman is looking good. We’ve noticed that Auctionhouse Gavel looks a little better after the balance changes, but we still don’t recommend running 2 copies of it. A 1-1 split with Nimbus seems sensible. If you want to farm Hunters and Demon Hunters, this is the way.

We really can’t work on Evolve Shaman. We’re not sure how good this deck can be, but many players are likely going to be happy about it failing to gain further visibility.

Even though Shadow Priest is obviously weaker after the Illucia nerf, it’s still a competitive deck after proper adjustments. You could argue there’s no reason to play it with Face Hunter turning the tables and now looking strictly superior, but it’s worth noting that Priest isn’t really the dead, unplayable class it may seem to be.

When it comes to the late game though, Priest is terribly weak. It will need to find a win condition in the mini-set that can compete with what’s available to other classes. The days of grinding out opponents are gone.

The meta that is emerging after the latest round of balance changes looks very diverse and fairly balanced. The popularity of Quest Mage is certainly something that draws negativity, but it is driven by the fact that a significant section of the player base simply loves playing the deck regardless of how well it performs. In the past, we saw it exhibiting high play rates when it looked far worse than it does now.

In any case, the field looks very dynamic, with different playstyles seeing success. It seems that any deck that raises its head a bit too high, proceeds to attract its counters and start up the next meta cycle.

And the next meta cycle might be driven by Hunter. With Taunt Druid drawing more attention, space has opened up for Face Hunter to find more success, and it’s doing pretty well everywhere on ladder. Should Face Hunter rise, it might finally cause Quest Mage to decline in play. If we ever reach that point, things could dramatically flip once again, but a mini-set looming later this month is the more likely cause of a big shakeup.