Welcome to the 210th edition of the Data Reaper Report! 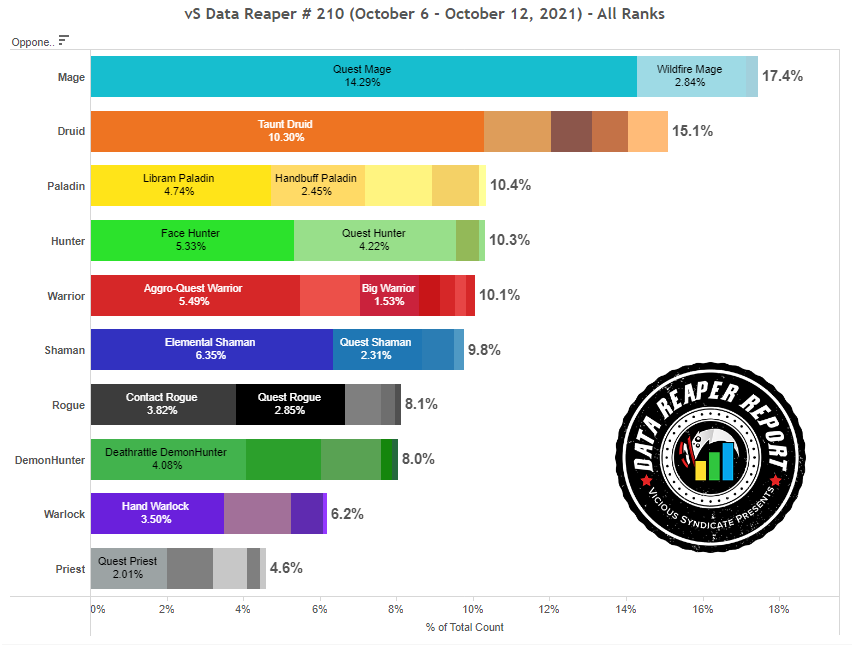 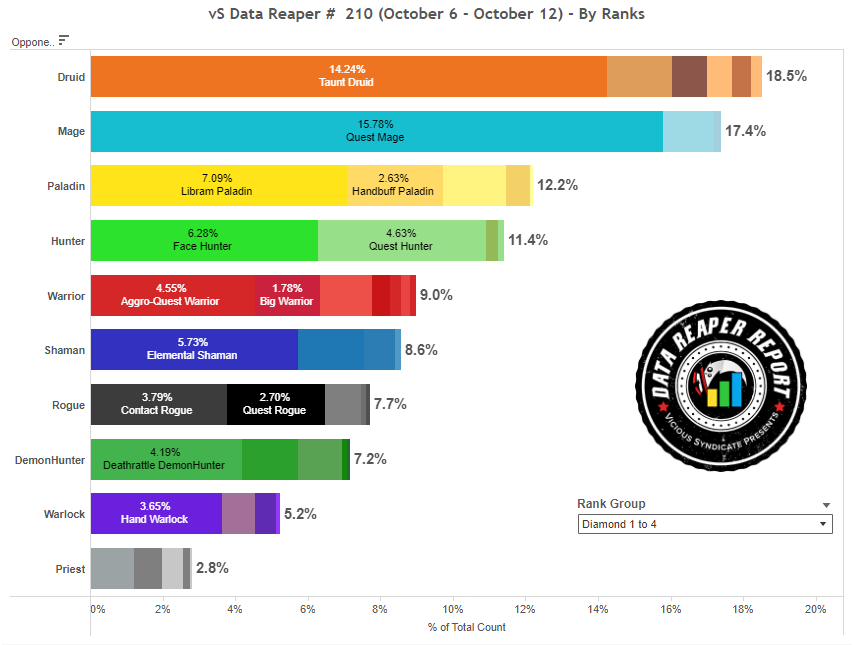 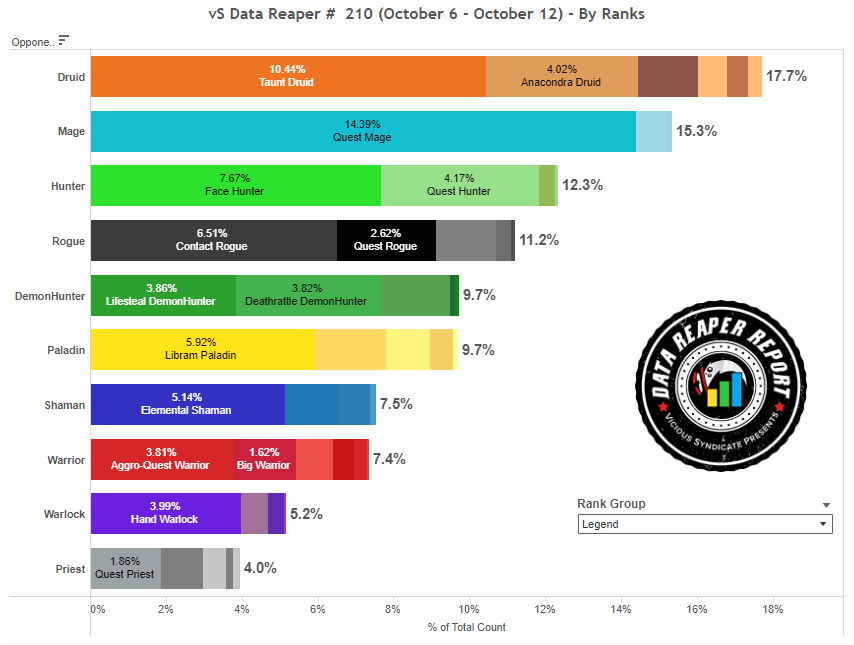 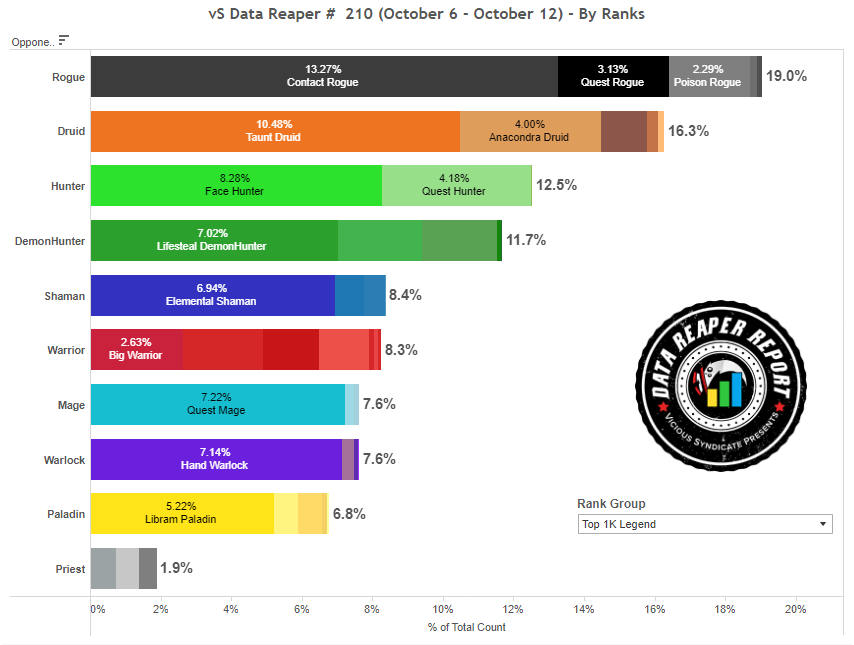 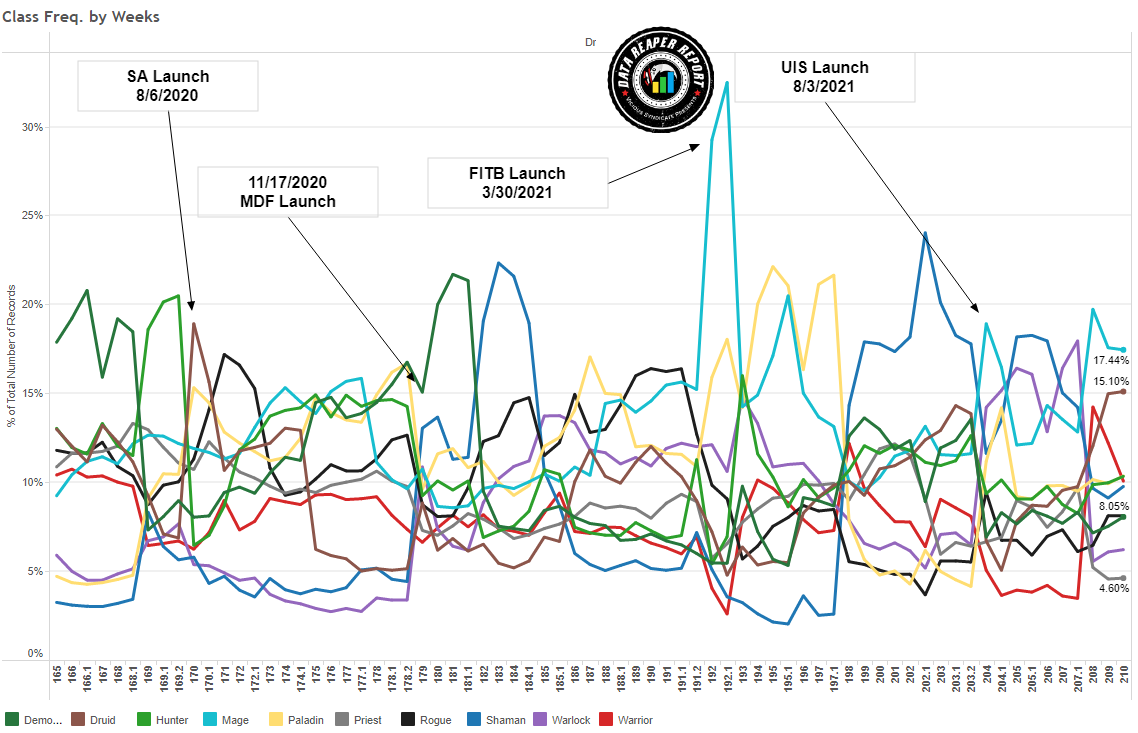 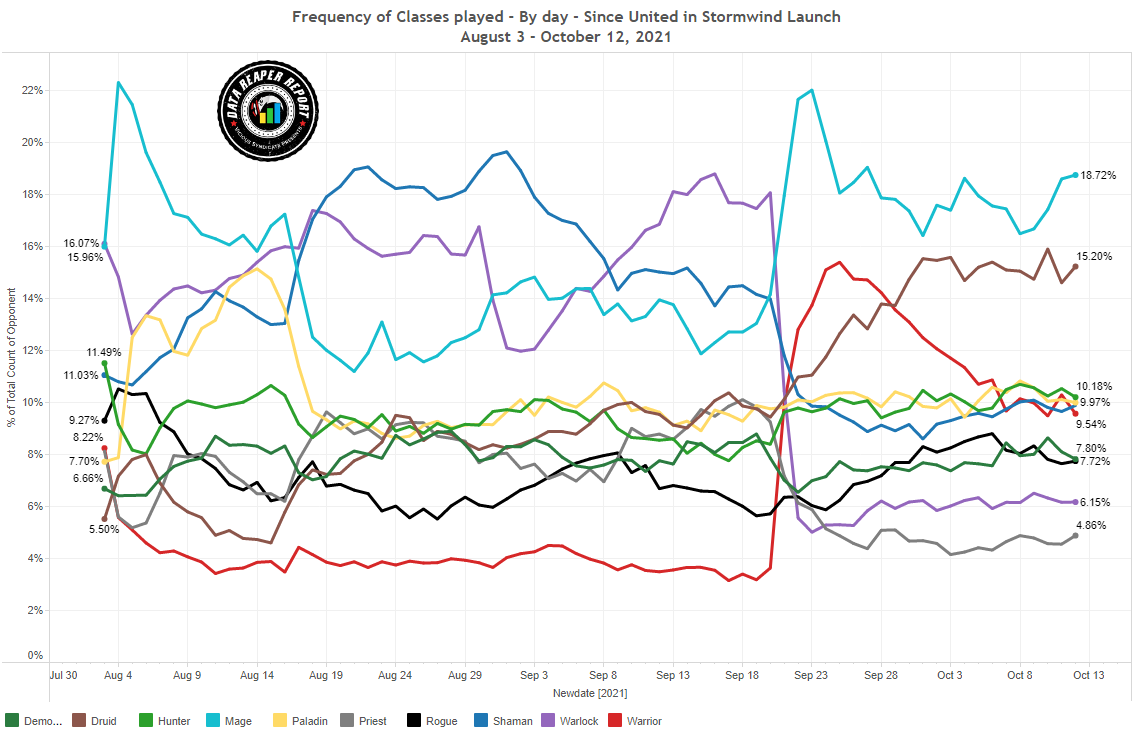 Quest Mage is slightly rising in play once again this week, though there’s an opposite trend at top legend, where the deck is in decline. You’re going to see throughout this report that most changes in the meta occur at the top, because high level players tend to adjust their deck choices more quickly to find an edge in a relatively settled environment.

Mage’s decline at higher levels might be driven by a significant rise in Contact Rogue. This is now the most popular deck at top legend by a significant margin. Its presence at other rank brackets is quite small, as we know it simply does not perform there. From Bronze to Diamond, it never goes above a 4% play rate. Quest Rogue has declined, and Poison Rogue remains niche.

There’s relative stability of Druid, with a small rise in all of the class’ archetypes. Outside of its general strength in the field, Taunt Druid tends to pick up more play when Face Hunter is successful, while the Celestial Alignment decks are often picked to counter Quest Mage.

Hunter usually tends to stagnate at this stage of an expansion, but not during Stormwind expansion. Face Hunter keeps finding different cards to experiment with.

Deathrattle is the most popular DH deck up until legend rank, where Lifesteal takes over and is mostly utilized as a pocket counter for Contact Rogue. Fel DH stays surprisingly fringe throughout.

There’s quite the spike in Elemental Shaman, especially at top legend where the Doomhammer variant is getting traction (though the Whack build is still more popular). This trend is driven by Doom Elemental’s performance against Rogue, but also to a lesser extent, Mage.

Warrior is fairly diverse in its options. Aggro-Quest is the most popular choice, but as you climb ladder and this deck noticeably declines in its performance (which we’ve seen in previous reports), you’re more likely to run into defensively minded Warriors. Of course, a lot of it has to do with the decline of Mage and the rise of Rogue.

Handlock has picked up play, but it’s nothing substantial. The class is still fairly unpopular throughout ladder, and only becomes a greater presence at top legend.

Libram Paladin is going through changes, with the secret variant picking up relatively more play this week. Other Paladin decks are not too visible.

Priest is a mess. 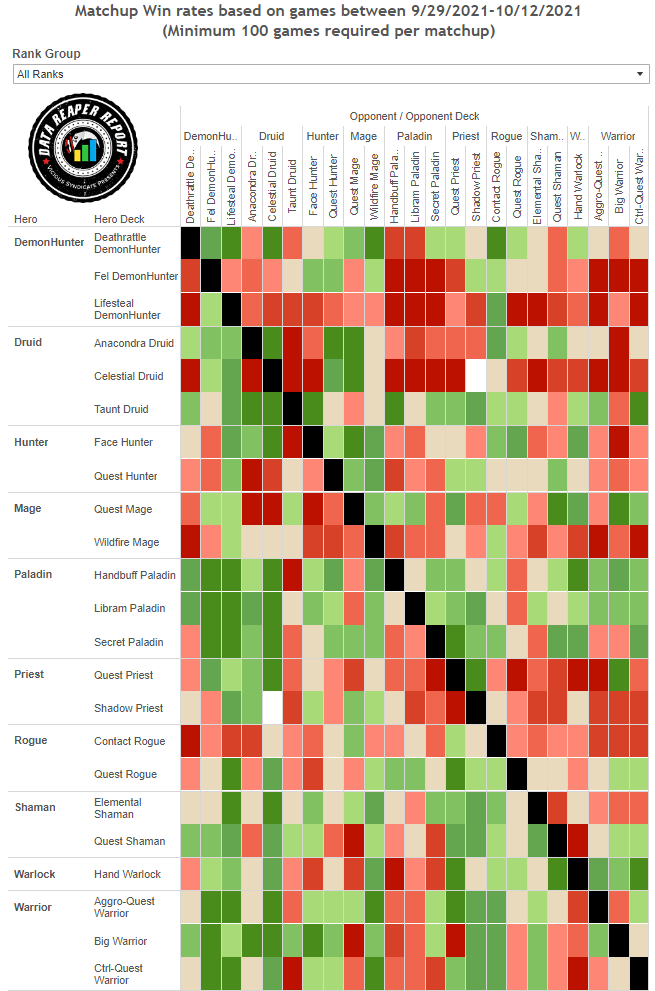 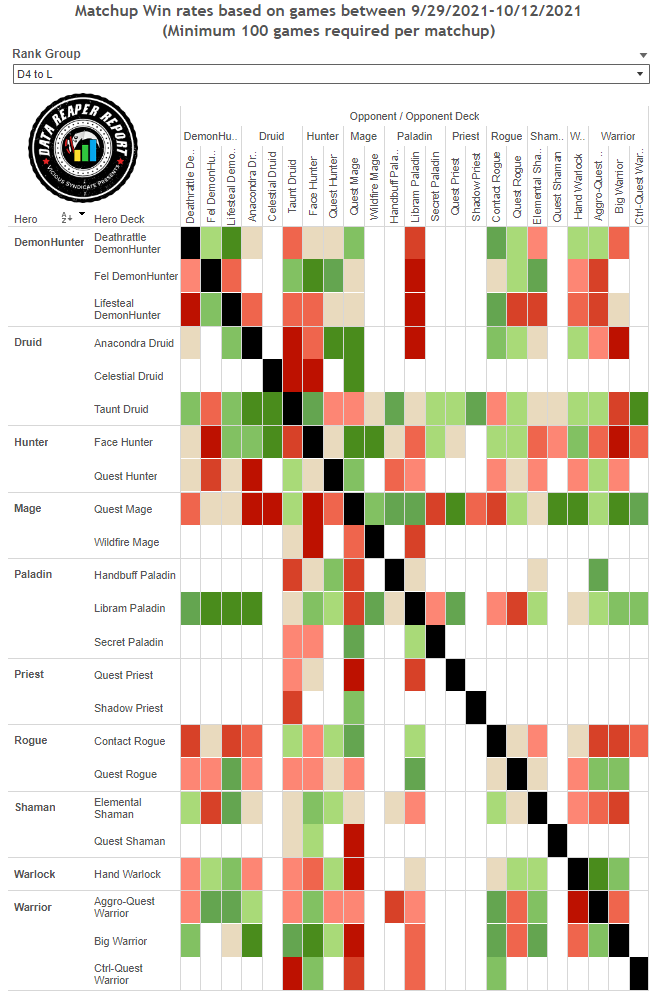 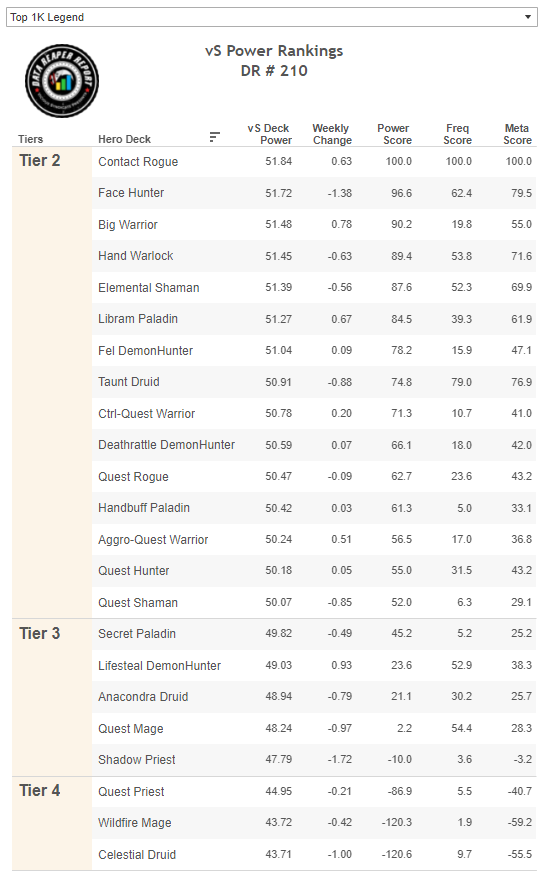 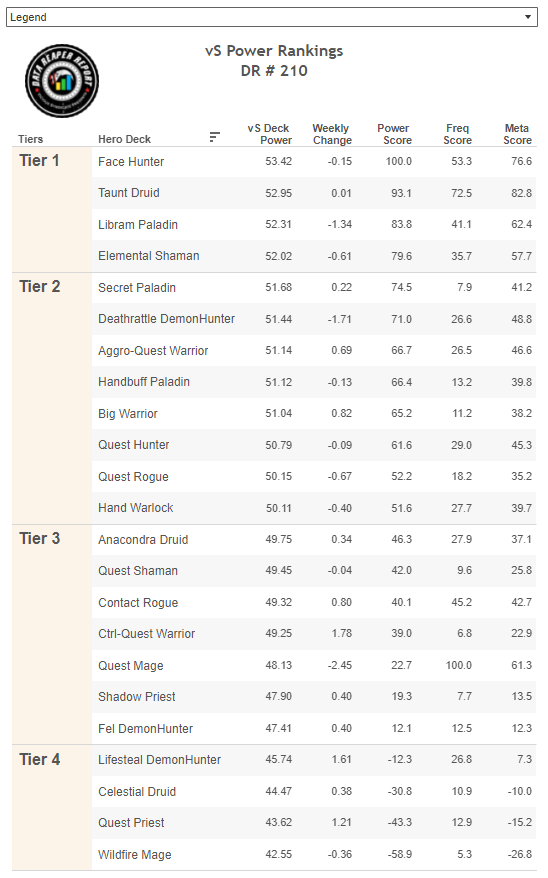 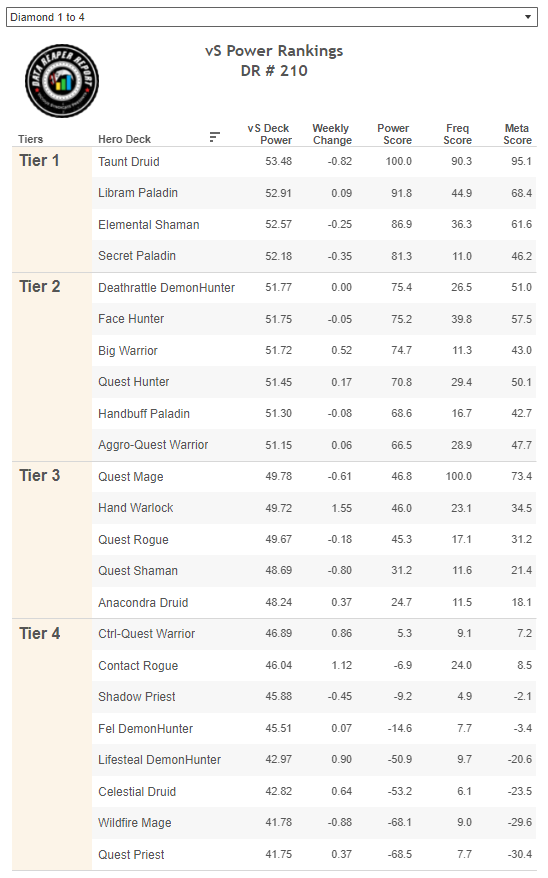 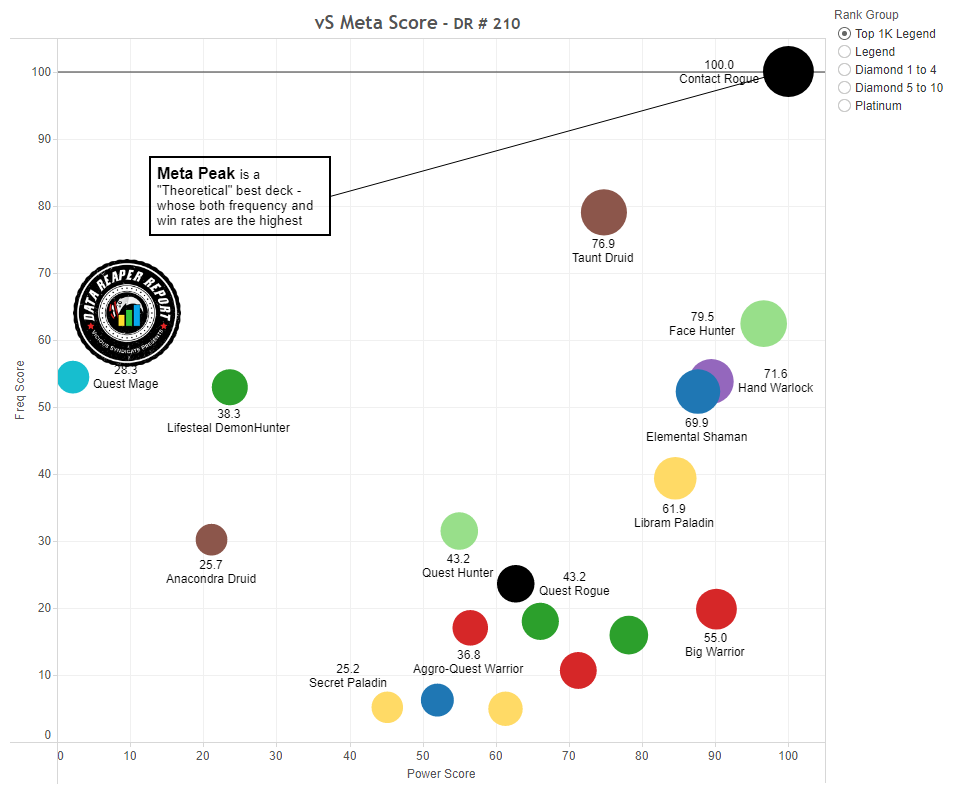 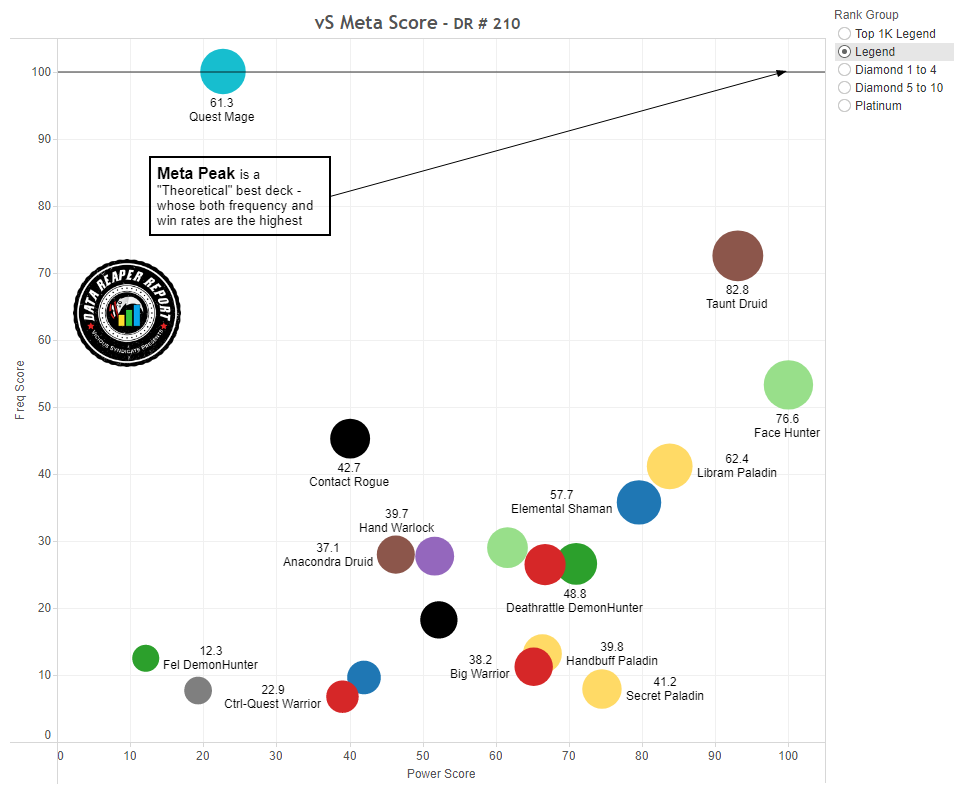 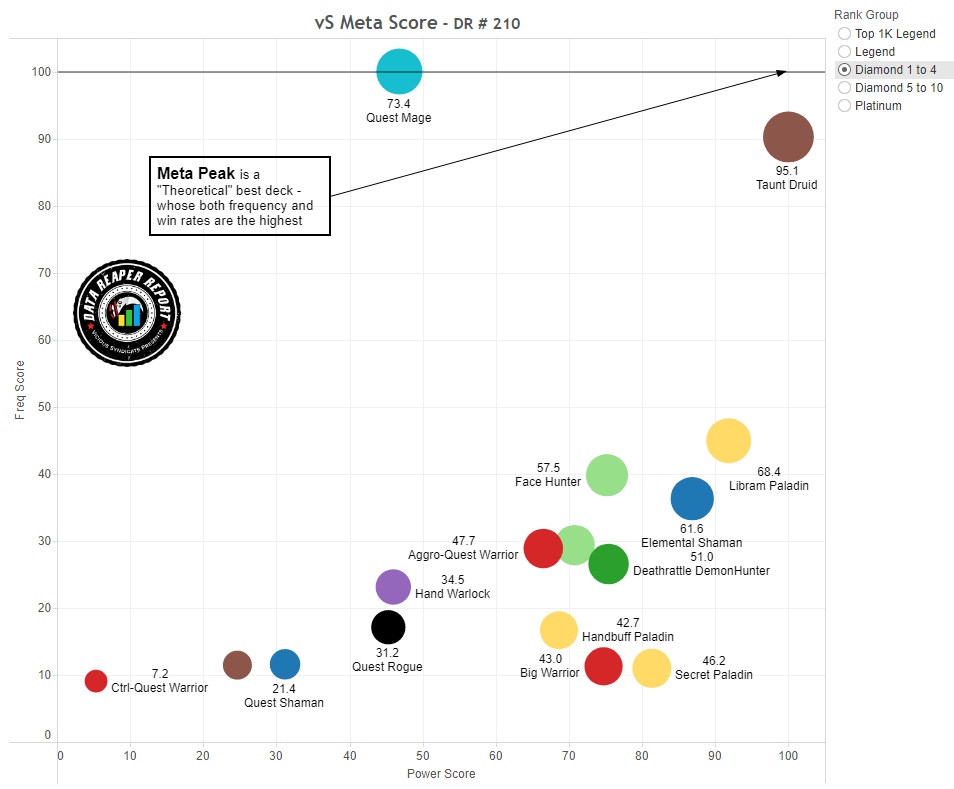 We’ve reached a rare moment where no Tier 1 performers exist in the top legend field. The meta is generally very balanced, with a wide variety of playstyles looking competitively viable. But even in other ladder ranks, where Quest Mage is far more popular, there isn’t a glaring issue with ladder diversity. Taunt Druid and Libram Paladin are the best performers at Diamond, despite both decks exhibiting unfavored matchups into Quest Mage. There’s a large selection of decks to pick from in nearly every class, and all of them have answers. No deck can spike in play without negative consequences to its win rate, with the exception of perhaps, one unique deck.

Our advice regarding Contact Rogue is mostly the same as it was last week. Guild Trader is very slightly better at top legend compared to Kazakus, while Kazakus is much better outside of it. The deck’s unprecedented learning curve means that if you’re not a high level player, you’re unlikely to find good results with it.

One recent trend has been to swap Guild Trader for Talented Arcanist. Arcanist’s functionally is very unintuitive, but its effect is basically an aura that is ‘spent’ once you’ve cast a spell. This means that you could use Arcanist to buff all of Garrote’s bleeds since you’re not “expending” its charge. You just need to avoid playing a spell following Arcanist, so you generally use it alongside your Field Contact.

We didn’t have good enough data to compare it to Guild Trader. On one hand, it is cheaper than Guild Trader and easier to trigger alongside Field Contact. But, it’s a dead draw throughout the game, and it can be more awkward to use. It does allow you to run Kazakus alongside it, so that could be the main upside of the card. We suggest cutting one Neophyte if you want to run both.

Taunt Druid is still very dominant on ladder, though it hits a bit of a wall at higher levels of play. There are several matchups that get worse for the Druid as you climb ladder since stronger players understand how to deal with the deck, and the way to perform dramatically better against it is by planning for Oracle/Battleguard answers. As long as you keep the Druid off the board, you’re in good shape.

When it comes to its build, we still like Kazakus a little more than Park Panther. It helps the tougher matchups. Park Panther enhances the deck’s strengths further.

Face Hunter is seeing new developments, driven by Grandmasters’ experimentations. Moonfang is starting to see more play as a 3rd beast option that excels in slower matchups. Basically, it punishes decks for playing passively and utilizing removal instead of proactively contesting board. Since we’re leaning into the slower matchups, Guardian Augmerchants make sense.

But, this build isn’t necessarily better on ladder. The Standard build still looks very strong, and a choice between the two is very matchup dependent.

Quest Hunter is fine. We think the deck has a very high scope for improvement even if it gets one decent spell in the miniset. The reason is that its best build is forced to run some cards that aren’t great: Wandmaker/Scorpid. We’ve also looked at Selective Breeder, and it’s even worse. There’s just nothing better, it seems.

Swap out these generic neutrals for more consistent quest progression tools, and this deck could become the real deal.

Demon Hunter took a bit of time to adjust to the nerf to Irebound Brute, but the best builds of Lifesteal DH and Fel DH seem to have been settled now. We can’t emphasize enough how strong Mag Fel DH looks. It’s probably the strongest utilization of Magtheridon that we’ve seen since the card was released. Felosophy is not an important card for Lifesteal DH at its current iteration. Deathrattle DH has long been figured out, and is a pretty good deck.

Elemental Shaman is looking very good these days. The Doomhammer variant has been gaining traction as an answer to Contact Rogue at higher levels of play, and it’s quite effective in this matchup. But, there is a sacrifice in other matchups to run Doomhammer over Gavel/Whack.

Doom Elemental Shaman is better against decks with strong removal options and/or an indimidating clock. So you’re looking at improving against Rogue and many of the questline decks in the format (Warlock, Mage, Hunter).

The data this week has mostly confirmed what we’ve figured out about the class last week.

Troublemakers are pretty serviceable in Aggro-Quest Warrior. They’re clearly better than anything else we’ve seen compete for the final few slots, so far. They help the deck close games out and pick up more wins overall.

Control-Quest Warrior might become a Tier 1 deck if something happens to significantly reduce the Quest Mage population. This deck is already pretty strong where Quest Mage isn’t as popular.

Control Warrior, though it doesn’t see much play outside of top legend, is another deck that looks pretty decent in similar circumstances. It does seem to be a little worse than the Quest version, since your win condition is clunkier.

Big Warrior is the best Warrior deck. As long as you don’t run Mo’arg Forgefiend, you should be fine. Colossus is good vs Paladins, Shamans, and other Warriors. Cutting Colossus helps against Rogues and Mages.

As people are playing with more refined and efficient decks, Quest Mage is suffering and looking increasingly vulnerable. Though it does have a few flex spots, a Spell Mage shell is very limited in what it can do to answer some of its counters, so the ability to meaningfully adjust just isn’t there.

Of course, it will remain popular for other reasons, but if you’re about winning, there are plenty of stronger decks out there.

The balance changes have successfully put Handlock in a reasonable position. Its power level is middling throughout most of ladder. It gets better when Mage declines in play, but even at higher levels, players have figured out how to exploit it with Face Hunters. It just can’t get overly popular without being punished for it.

Matchups such as Libram Paladin, where Warlock used to be clearly favored, are now far more difficult to deal with. Tamsin just isn’t a very effective win condition anymore, and Handlock has become far more reliant on its primary game plan to close opponents out.

No changes to the build, though we will say we’re liking Altar of Fire a little more, mostly as a Demon Hunter disruption tool but also as Bristleback activator against Hunters. Its utility against Rogue is unreliable.

The secret variant of Libram Paladin looks exceptionally strong, and is one of the best decks in the format. We’ve suspected that Taelan was bait (just didn’t have the data) and the deck wanted Libram of Judgment, and once players made that switch, the win rate shot up. The featured build is perfect. What makes the secret variant better at the moment are its Rogue and Mage matchups. These tend to be miserable affairs for the Vanilla build, but it’s a different story with the secret package. The matchups become much closer, and Libram of Judgment is a key performer against both.

The current meta, believe it or not, is pretty balanced and diverse. There are plenty of viable decks to play, sporting different playstyles. Questlines aren’t destroying the format. The world isn’t ending. If Quest Mage wasn’t grossly overplayed, we think this meta would be highly praised.

There are three notable decks from this report that we’ll choose to highlight.

Contact Rogue’s progress is something we continue to follow at higher levels. It’s a research goldmine for us nerds. How much more can it improve, and can it handle the top legend field that continues to search for ways to consistently beat it?

How strong could the secret variant of Libram Paladin be? We’re liking its depolarized matchup spread and how much better it feels to queue into Mage, especially when you run Libram of Judgment.

Doomhammer is also coming back, and Doomhammer Elemental Shaman is a deck we think could be a serious option in the upcoming Master’s Tour in lineups that choose not to ban Rogue.

Meta developments are still occurring, the mini-set is nearing, and Vicious Syndicate are shilling (we’re waiting for that cheque, Blizzard).