Welcome to the 234th edition of the Data Reaper Report! 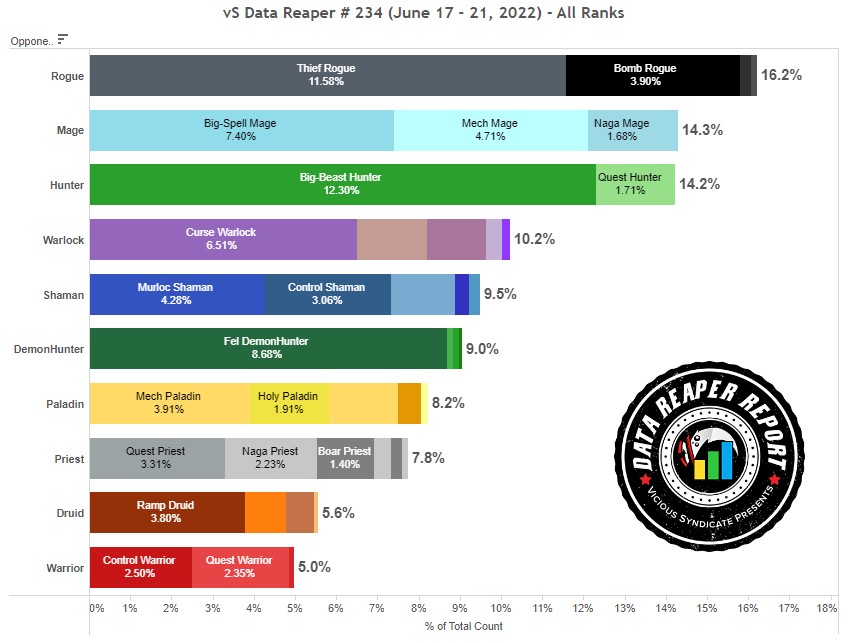 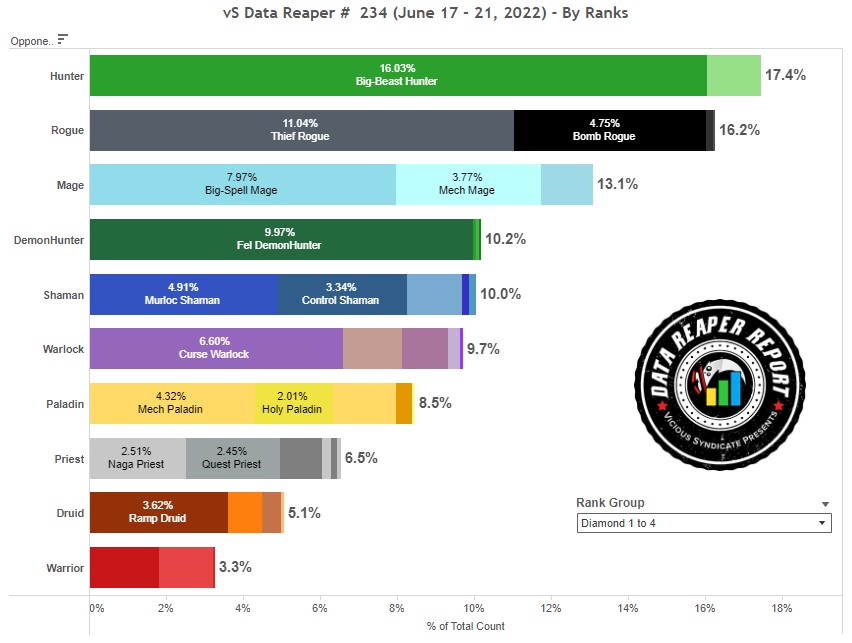 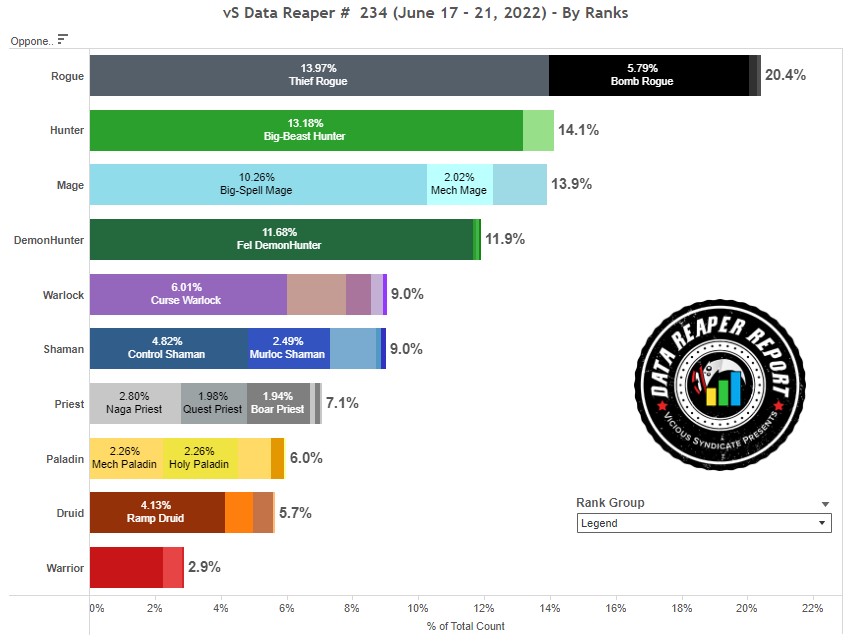 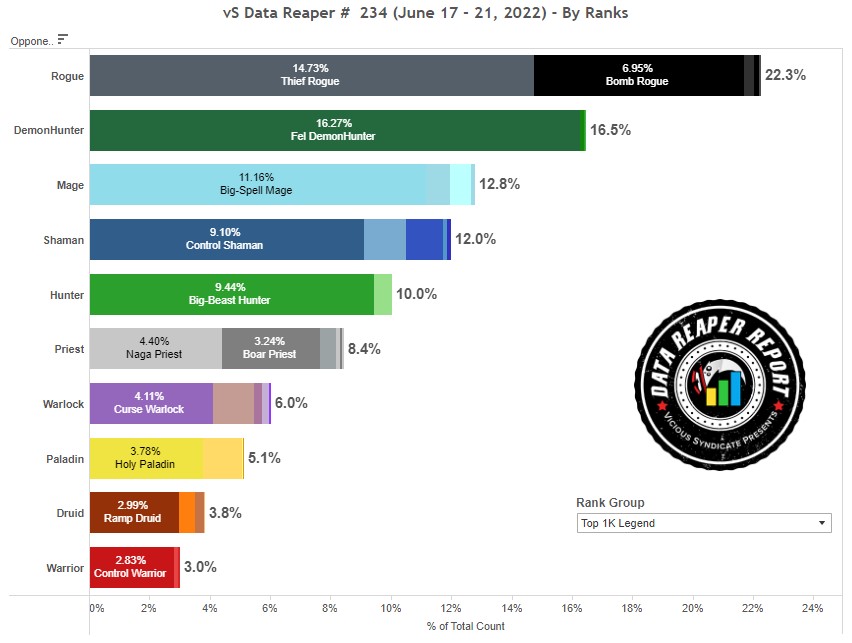 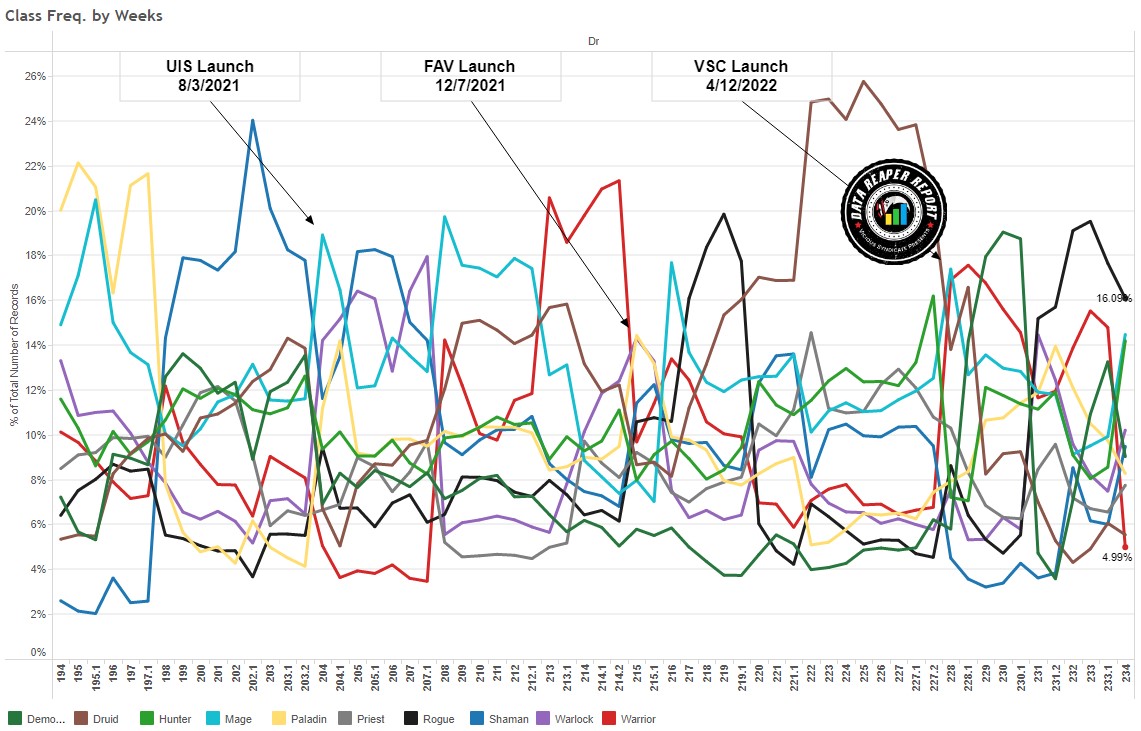 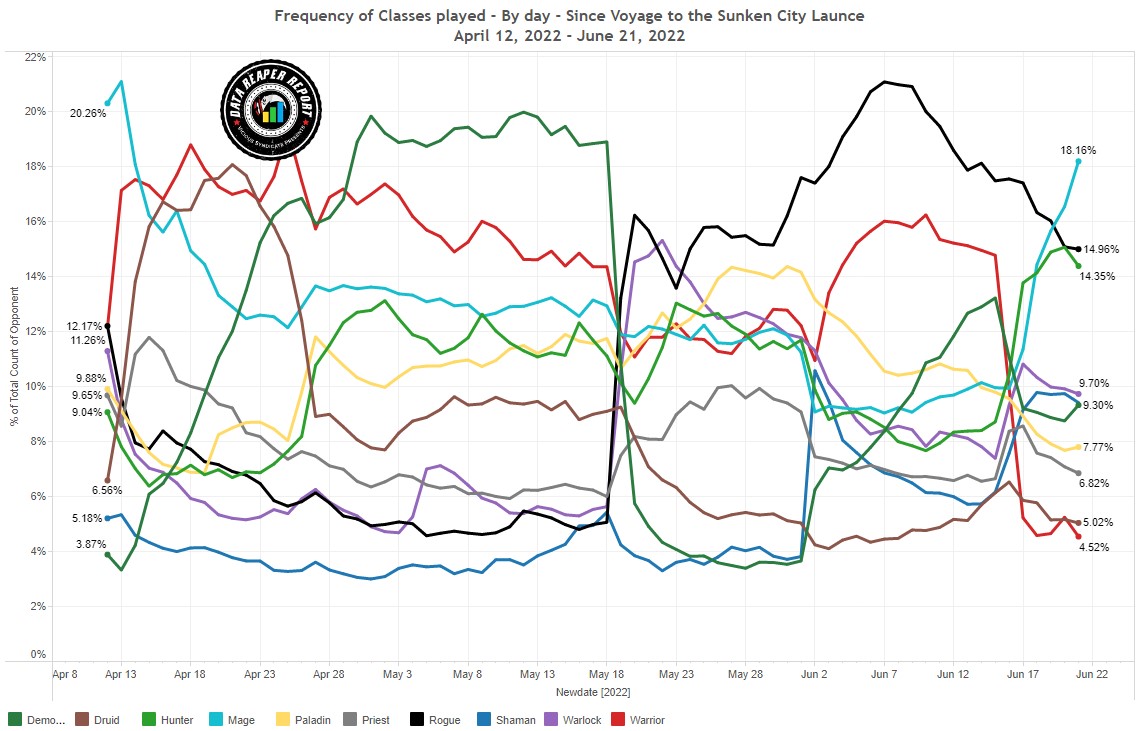 Last week’s balance changes have been monumental in altering the Hearthstone landscape. Thief Rogue has declined in play following the nerf to Gnoll and Mr. Smite. The player base is, of course, still very attracted to the archetype and it remains one of the most popular decks in the format. Vessel and Stash builds still carry a lot of overlap, and there’s plenty of experimentation when it comes to post-nerf adaptations. In addition, Bomb Rogue has picked up play following what can only be described as Control Warrior’s demise. We’ll see how much better this deck is now that its worst matchup is gone.

Fel DH seems to be taking the nerfs to Caria Felsoul, School Teacher and Battleworn Vanguard well. It remains popular at all levels of play, and it’s the most common deck at top legend.

Mage is unrecognizable. Naga Mage has severely dropped off following the nerf to Spitelash Siren, and in its place, we observe a meteoric rise of Big-Spell Mage running Drakefire Amulet and Rune of the Archmage. This was a fringe deck pre-patch but seems to have exploded following the nerfs to multiple late game strategies.

Shaman is back, big time. We have the aggressive Murloc Shaman seeing more play outside of legend, with Control Shaman running a murloc package taking over at legend. At top legend, it’s nearing a 10% play rate.

This has been a very good patch for the Hunter class, and specifically, Big-Beast Hunter. This archetype has risen in popularity at all levels of play. What’s interesting is that its play rate doesn’t even drop off that much at higher levels, where it nears 10%. There is some experimentation here, with Vanndar variants, Naga variants and some more aggressive lists running K9-otron seeing play.

Priest hasn’t changed much. There seems to be a greater desire to play Naga Priest compared to before the patch, but the deck is still not too common. At Diamond 5 and below, this is still somehow Quest Priest’s territory. Boar Priest is a fringe deck at top legend.

Warlock has picked up play. Curse Warlock is noticeable throughout most ladder, but slightly dips at top legend. Some Murlocks can also be found, along with Curse of Agony Warlock.

Paladin has taken a step back. You’d expect Mech and Handbuff Paladin to not see as much play with Control Warrior gone, but Holy Paladin doesn’t attract much interest either. It is less common than Curse Warlock at top legend!

Druid isn’t seeing too much play. With Warrior’s fall, there’s less of an incentive to run Ramp Druid and other Druid decks haven’t picked up any traction either.

Warrior has completely collapsed. The balance changes have been particularly harsh on Garrosh, which has led to Control Warrior being obliterated. Quest Warrior hasn’t enjoyed the Nellie nerf either. The deck isn’t even particularly popular at Gold through Bronze anymore. How does the format look now that Control Warrior’s reign is over? 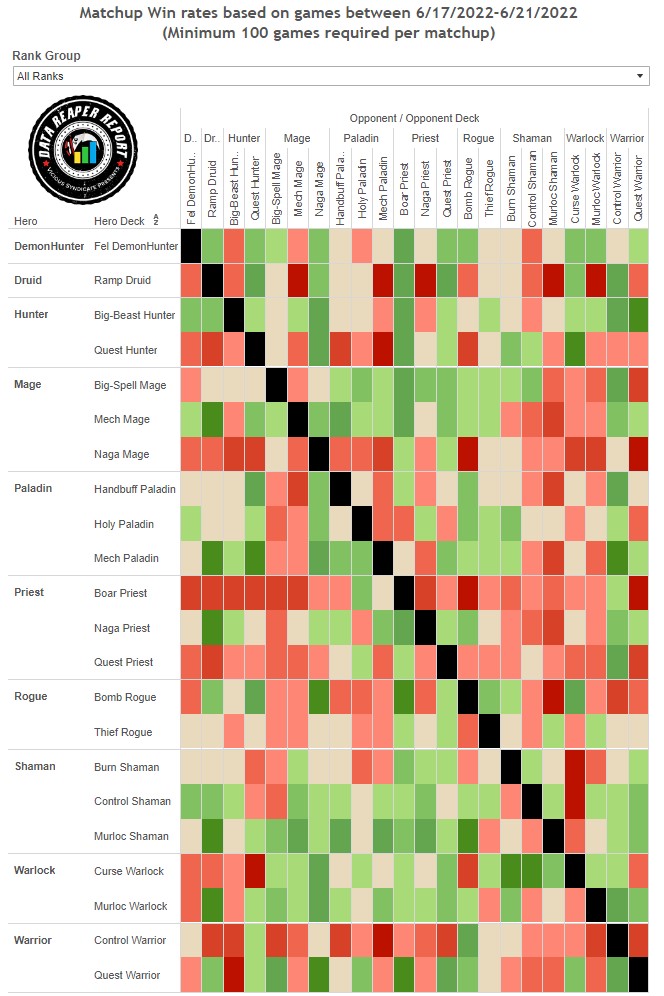 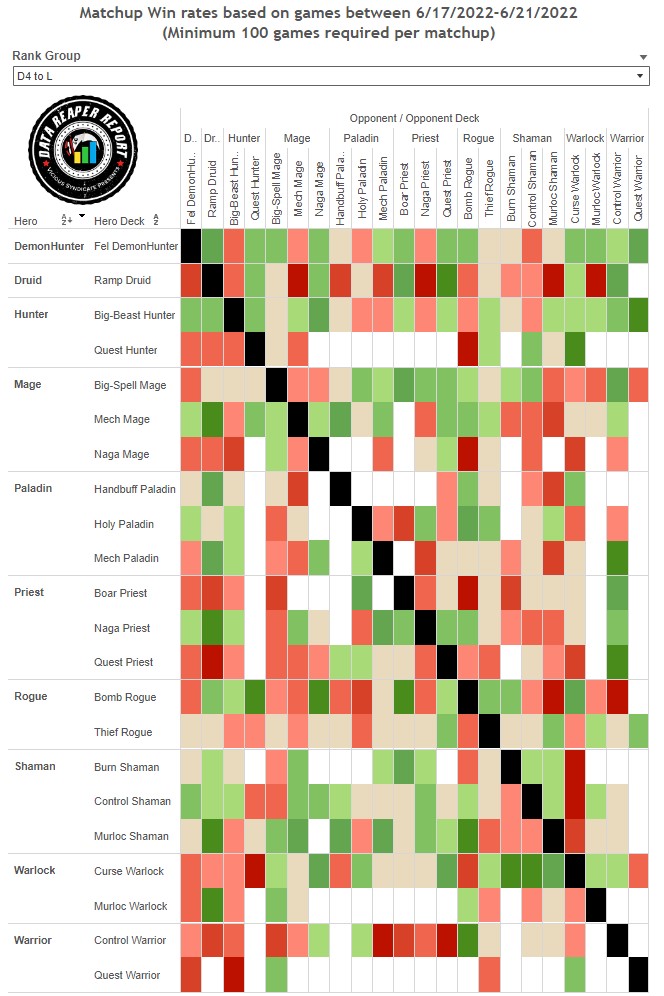 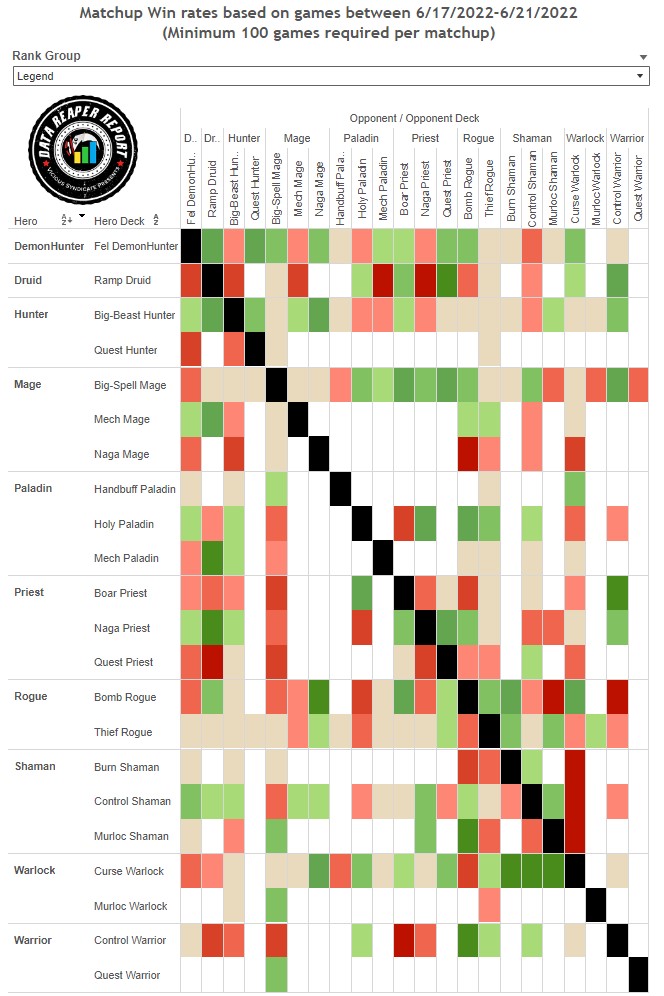 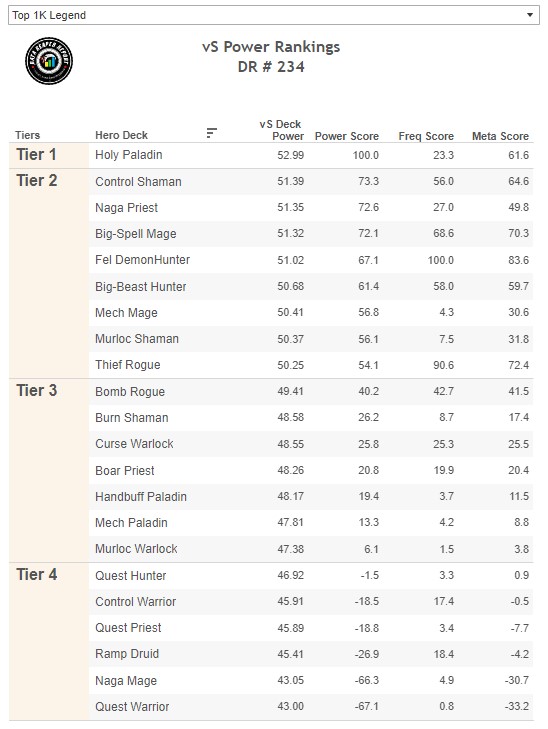 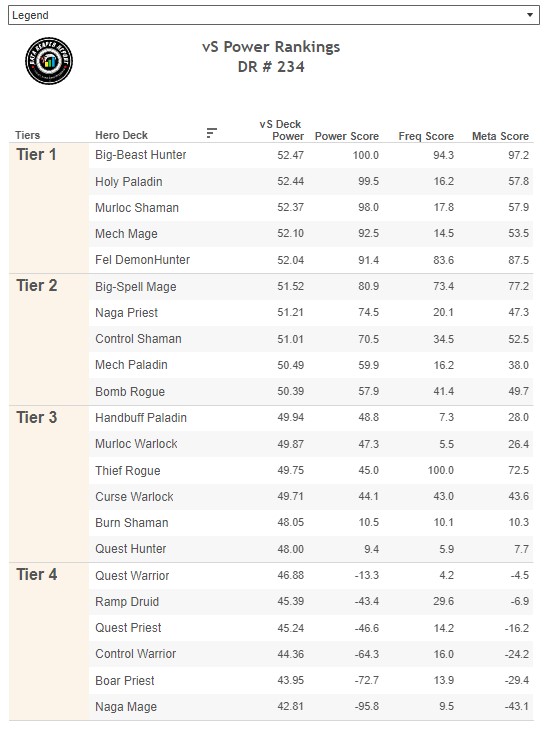 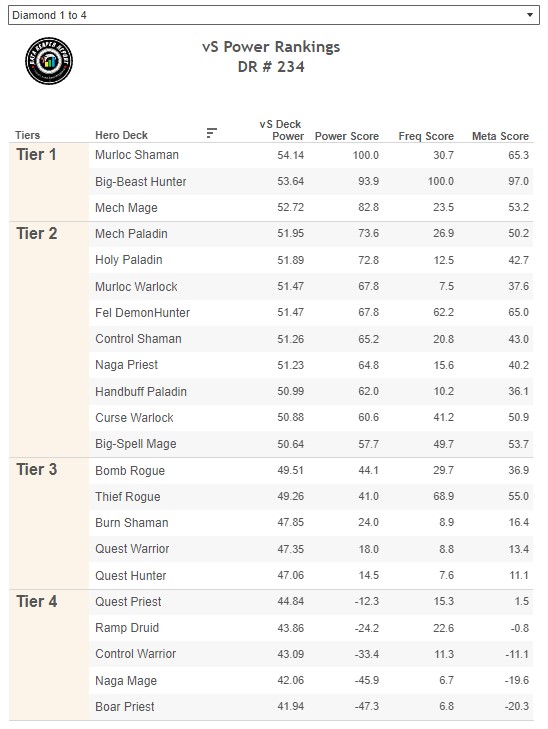 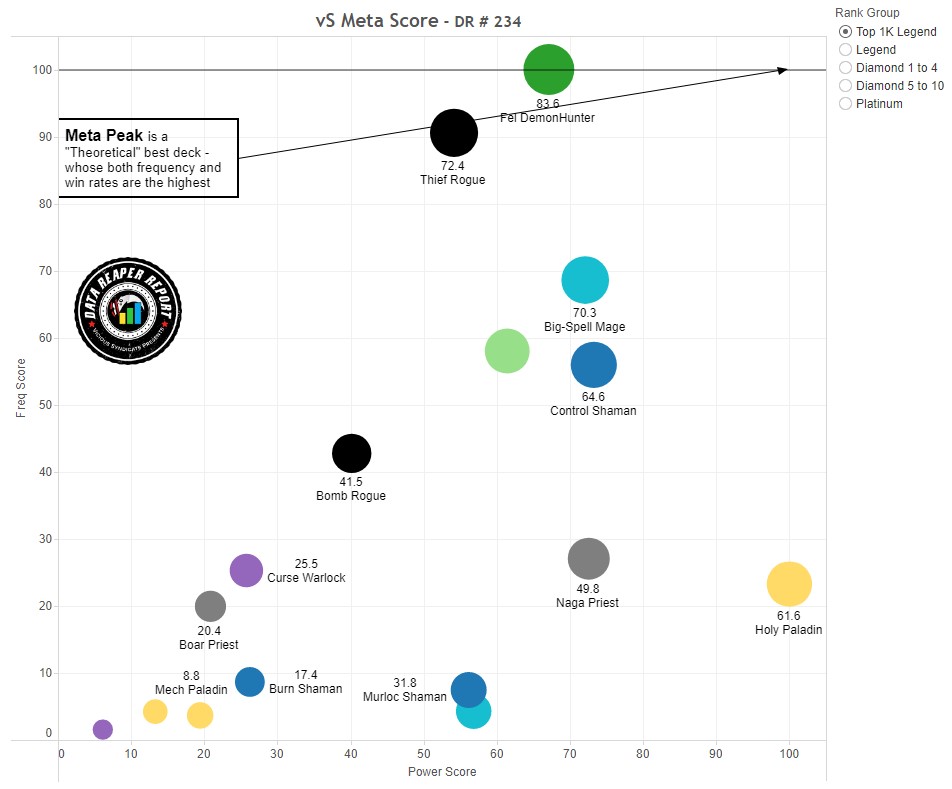 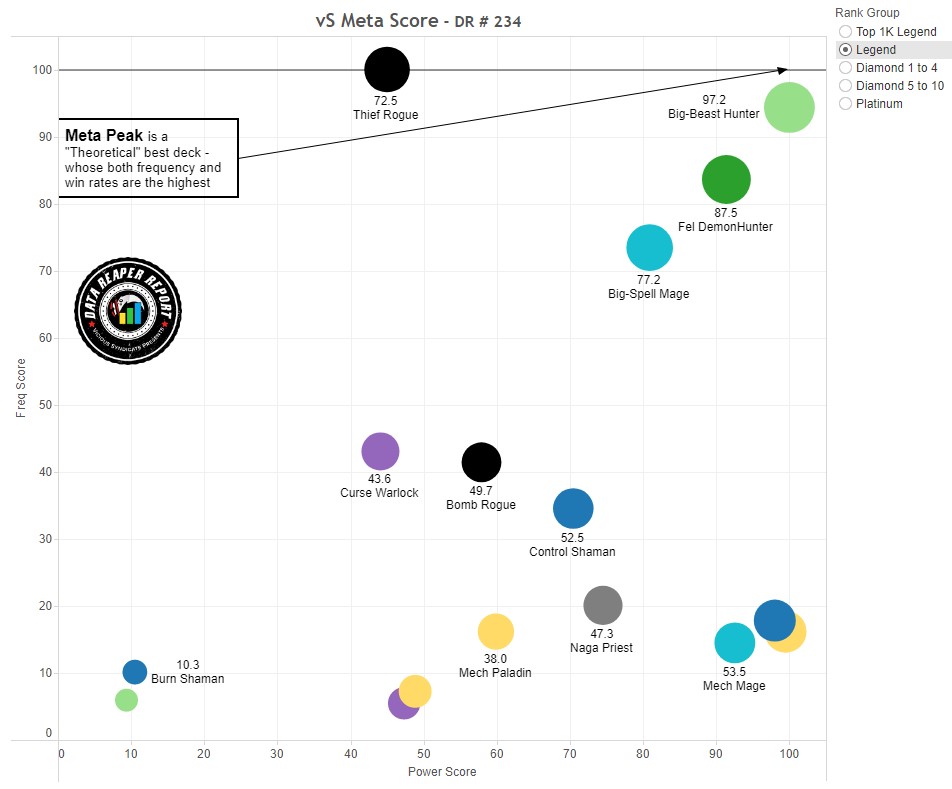 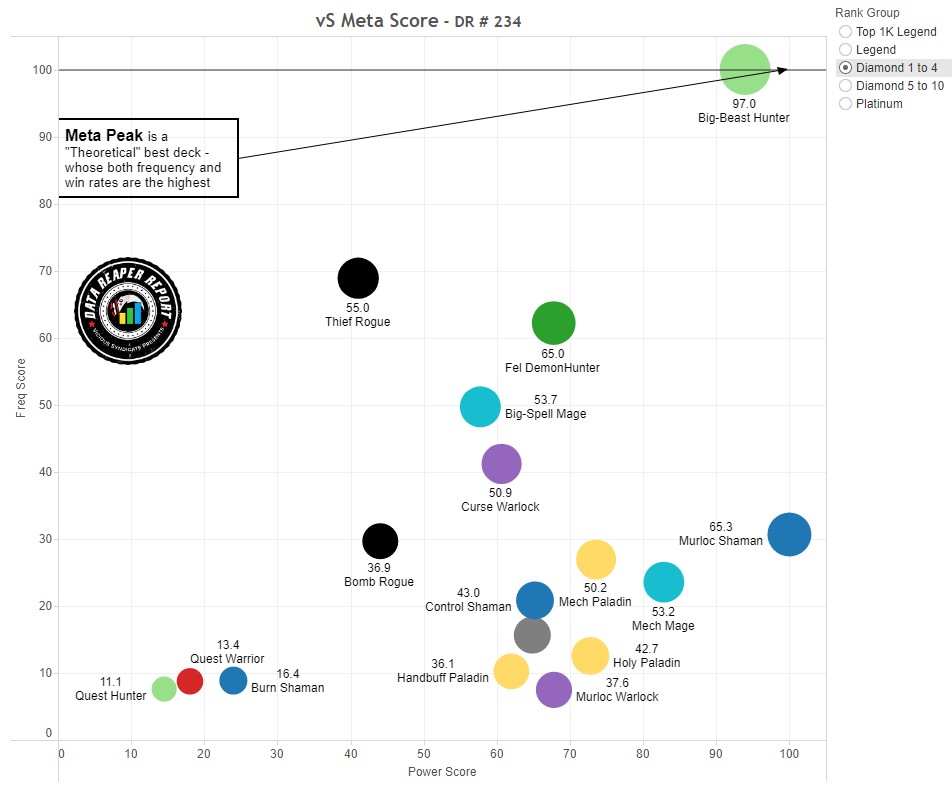 The meta is clearly unsettled after the patch and there are probably more changes in store, but this is already a drastically different field to what it was before.

The nerfs to Wildpaw Gnoll and Mr. Smite have certainly hurt Rogue, but the class remains very competitive thanks to the destruction of Control Warrior, which was the class’ hardest matchup.

Vanilla Thief Rogue wants to keep running Filletfighter, Azsharan Vessel and Mr. Smite. The only question is whether we want to run Peasants, or a 2nd Extortion alongside Viper or Okani. Peasant is an active liability against Demon Hunter but looks quite good elsewhere. Control Warrior might be gone, but decks like Big-Beast Hunter and Control Shaman struggle to clear a turn 1 Peasant as well.

The Stash variant of Thief Rogue could be headed in a different direction, cutting Smite/Vessel, and running a minion-light build with Shroud and Blood in the Water. There is a greater focus to draw Gnoll and Trickster consistently, so Peasants are cut. The addition of Blood in the Water is what really sells us on the build, as it gives Trickster additional spell targets to cheat out. With the nerf to Smite, this list compares well to Vessel builds and might be as good as the Vanilla variant.

Bomb Rogue has massively benefitted from the Warrior nerfs, and the nerf to Gnoll is even encouraging players to experiment with non-Maestra builds. They look very competitive and there is no clear-cut answer to what’s better.

The Maestra build looks easy to refine. There are 28 cards that are locked in and then a choice of Peasants or a couple of spells. We’re currently leaning to skip the Peasants as they aren’t as strong in some of the current format’s popular matchups as they are in Thief Rogue.

The Vanilla build is a bit harder to figure out. We like Habugabu’s original build but would cut Okani and Crabatoa. Inkveil Ambusher is fantastic. It comes down to leaving out Peasant, Filletfighter or a couple of spells (Backstabs).

Fel Demon Hunter remains very strong even following the nerfs to some of its cards. Adjustments should be swift and effective. Metamorfin looks incredible these days, especially with the nerf to Gnoll. We think it’s a core card at this point. We also like running Bone Glaive to replace Caria Felsoul for some off-board damage that can be very valuable in matchups such as Rogue or Hunter. Spectral Sight starts to make more sense over Need for Greed with the build’s curve getting lower.

School Teacher is dropped, and it’s very hard to find a worthy Naga replacement. Herald of Chaos is usually the go-to, but we wouldn’t be surprised if the correct build simply runs three Nagas and takes a hit on Predation consistency. We’re very underwhelmed by Herald.

Vanguard did get weaker, and it’s not an automatic keep in the mulligan anymore, but it’s probably still worth running. It would be the card to make way for Herald of Chaos, or another Naga that ends up worth playing (Rainbow Glowscale?).

Big-Spell Mage is one of the strongest decks in the format. It’s astonishing that this pile of cards is so effective, but there you have it. When it comes to card choices, Pelican Diver is insane. Far Watch Post is much better than Doomsayer. You can either run two copies of Smothering Starfish or split it with a Viper. The featured build is perfect with current available data, but we wouldn’t be surprised to see a novel card make an impact in the future.

Mech Mage got better too. You want to run Shivering Sorceress over Peasant now with Warriors gone. Naga Mage is dead and not even worth featuring.

Shaman is a class transformed and revived. Both Murloc Shaman and Murloc Control Shaman now look like powerful decks in the aftermath of Warrior’s nerfs.

We’ll reiterate what we’ve said in the past. Wildpaw Cavern seems like a bait card in Murloc Shaman. It’s just very slow, and we would certainly not run more than one at most. There is less of a need to run two Bloodlusts with Warrior gone, so there’s definitely some room for a new card to come in and potentially impress.

Control Shaman should likely cut Brann and School Teachers, giving you more room for removal options, but there’s also the option to run Flurgl and Glugg. Glugg has gotten a lot better this patch, since the meta has more board tension and removal isn’t as prevalent. We don’t love Chain Lightning, but it’s a decent alternative.

Burn Shaman is playable, but it isn’t great. No good reason to run it over Control Shaman.

Big-Beast Hunter is looking quite strong, and there’s not much that needs to happen for it to perform optimally. There are no changes in the Vanndar variant, while the Naga variant can drop School Teachers for Raj Naz’jan and Okani. Builds that focus harder on the early game with additional 1-drops and K9-otron look strictly worse. We can’t recommend them.

Quest Hunter got better with the patch. It’s still not very good, but it has left ‘unplayable’ status. The Multicaster variant is likely the best approach.

There’s nothing that Priest needs to change in its approach to the current format. Lightbomb is a bit more viable as a tech card in Boar Priest due to the explosion of Big-Spell Mages. School Teacher is still important in Naga Priest due to the card’s synergy with Serpent Wig. Quest Priest is still not very good.

Warlock breathes a little easier as both Curse Warlock and Murloc Warlock perform better. Curse Warlock persists with running School Teacher since it must run Brann anyway, though we do wonder if a better card is out there and not seeing play. We could run the second Baker and Starfish instead.

Holy Paladin is looking very good. The build we had before the patch is perfect. Vitality Surge is good, though there’s an option to run the second Righteous Defense.

Mech Paladin shouldn’t be concerned with Warriors anymore, so it makes sense to drop Mothership for Okani. If you haven’t noticed, Okani has gotten a lot better in multiple classes following the patch.

Handbuff Paladin can also reduce the greed by cutting cards like Cornelius Roame, which was strictly there for Warriors. Noble Mount is also better now compared to Annoy-o-tron.

Ramp Druid is looking weak. The best build might be the Vanndar variant, which says a lot about how far we’ve fallen. Colaque is very powerful in this specific deck, and so is Neptulon.

Beast Druid is likely the strongest archetype the class has to offer, based on its low sample. The featured build does solid work on ladder, and is possibly Tier 2, or Tier 3 at worst. Herald of Nature is a good card, we just couldn’t tell because of Shield Shatter.

Warrior has been obliterated. Control Warrior looks so bad that we couldn’t find a build we could recommend on ladder. There must be some significant overhaul for the deck to stand a chance because pre-patch builds do not work anymore.

Quest Warrior has also been hit by the nerf to Nellie. The card is bad now, so you’re better off running Stonemaul Anchorman. GG.

The meta is wide open, though there are some clear recommendations to players when it comes to taking advantage of some decks that look extremely powerful yet are severely underplayed.

Murloc Shaman is the strongest deck on the climb to legend while exhibiting an under 5% play rate at the Diamond bracket.

Holy Paladin is the strongest deck at top legend while exhibiting an under 4% play rate in that same bracket.

Pick them up while everyone’s sleeping.