Welcome to the 242nd edition of the Data Reaper Report! 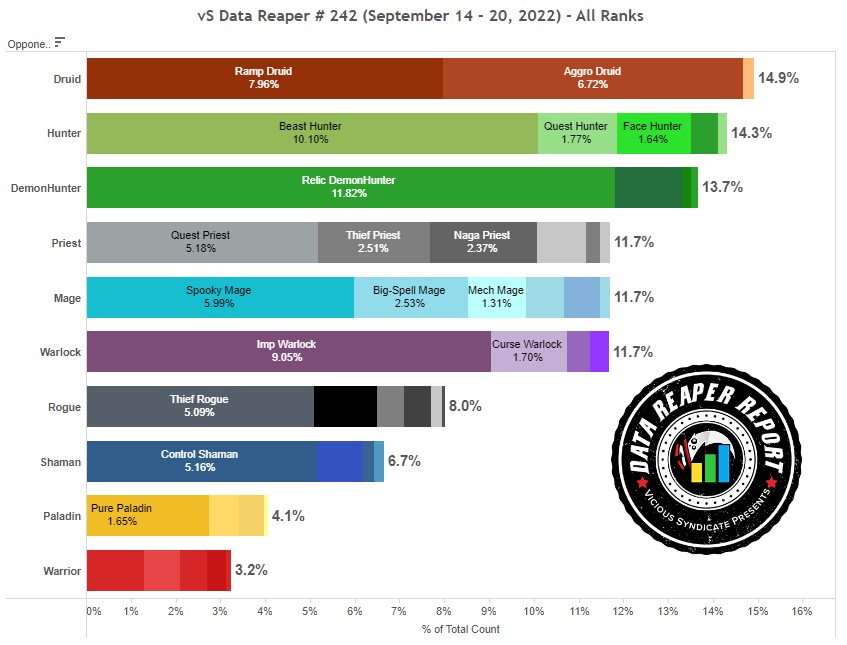 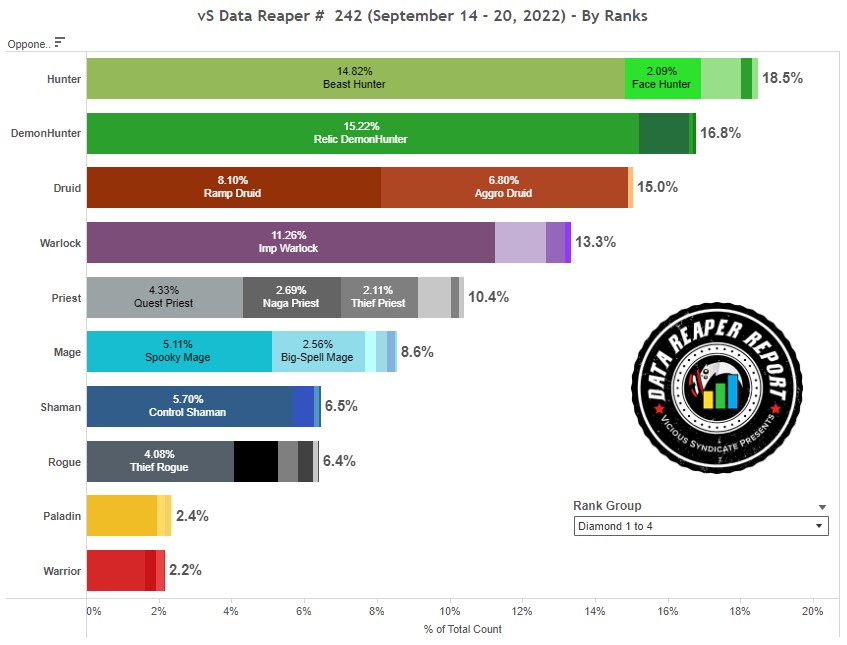 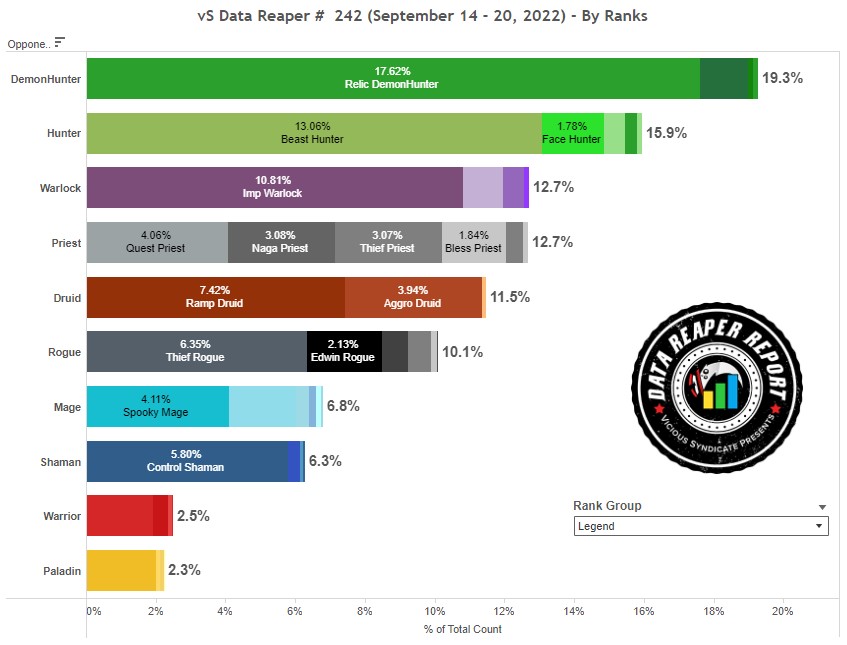 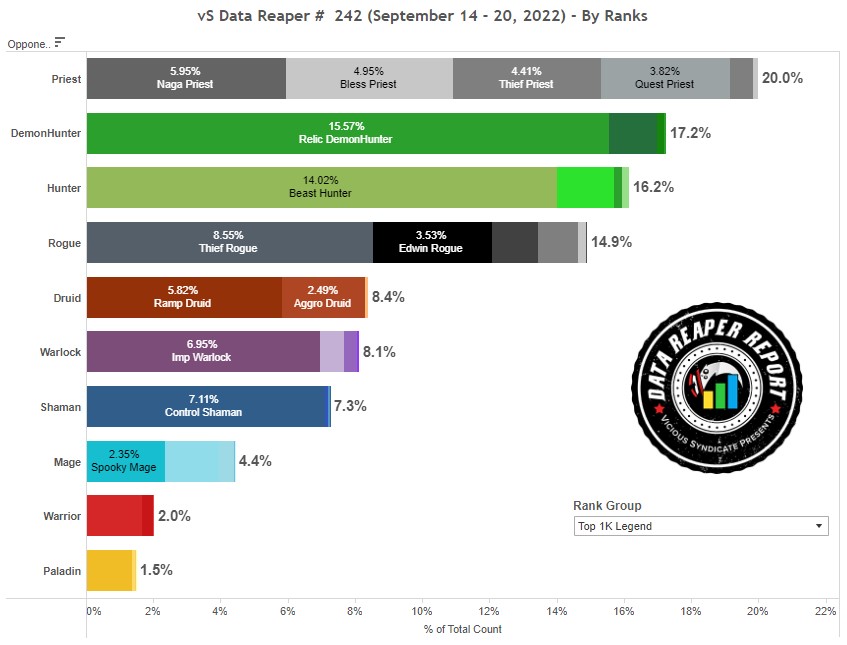 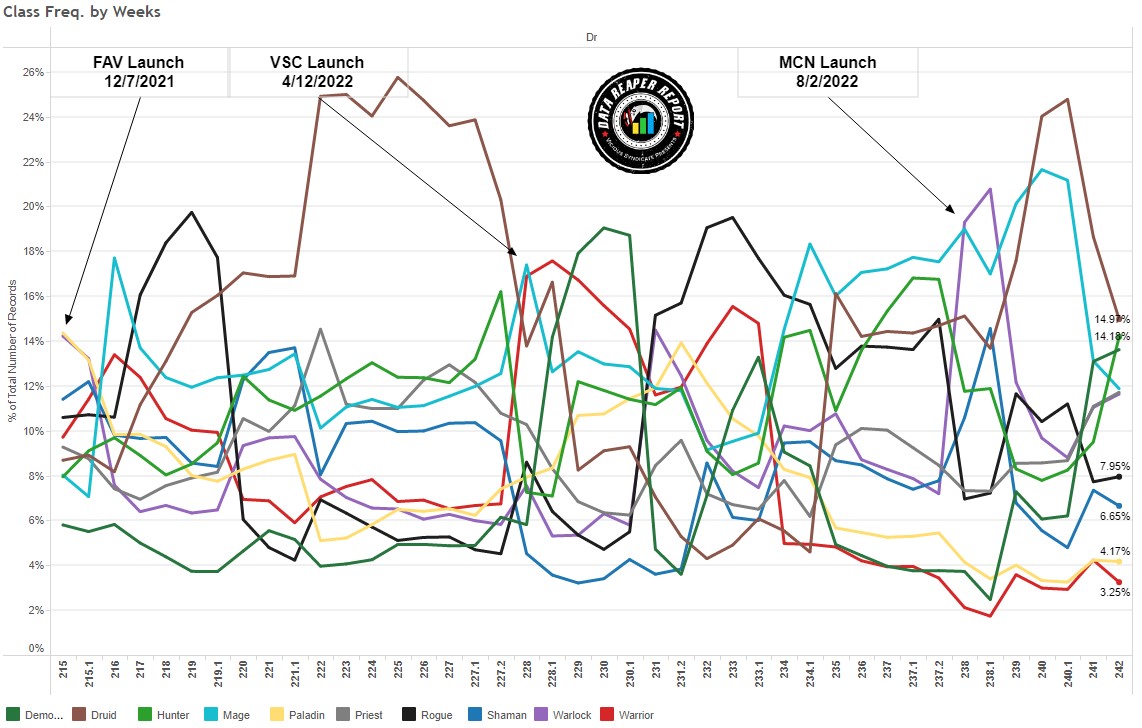 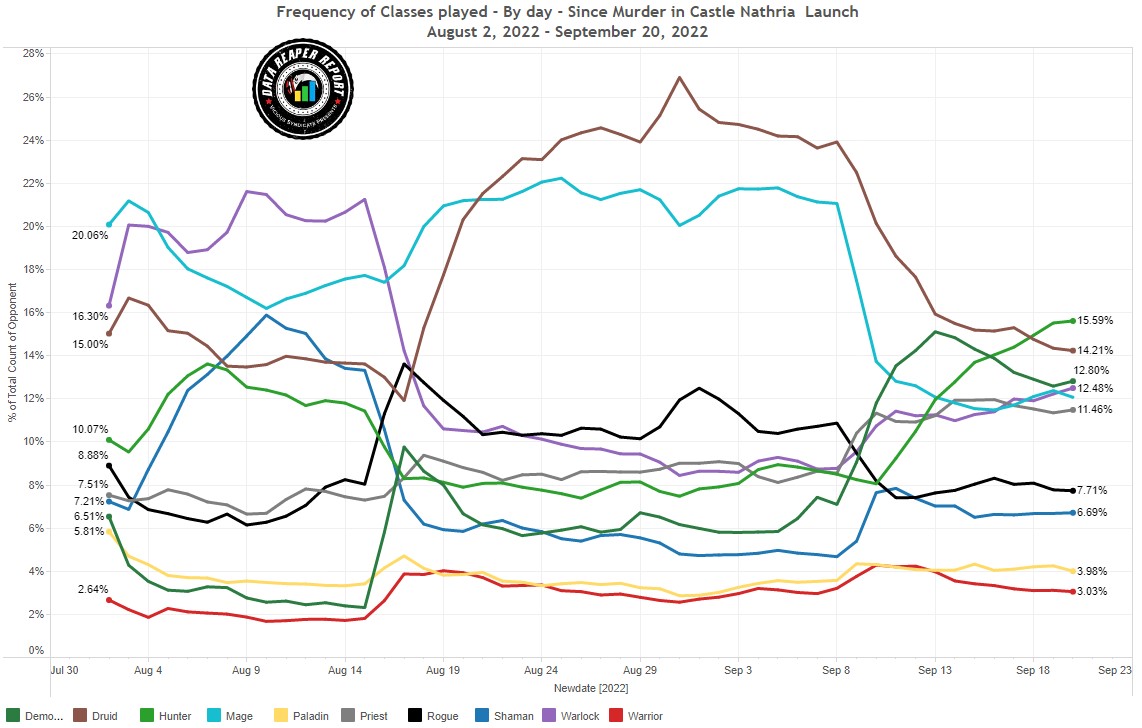 Beast Hunter has expectedly spiked in play at every rank bracket after its impressive showing last week. It is the 2nd most popular deck in the format at Diamond 4 and above. It will be important to see how its performance has been affected as a result, as decks have undoubtedly tried to target it more aggressively.

Relic Demon Hunter remains very popular, though its growth has stopped as it wasn’t delivering particularly good results. More experimentation with ‘Felic’ builds running Jace over Denathrius as a secondary win condition have popped up at higher levels of play.

Priest has risen to become the most popular class at top legend, with a very diverse set of decks. Thief Priest is a new deck that was beginning to pop up last week and got traction thanks to some individual successes. Naga Priest has risen in play, but not too much, with player reluctance continuing to be a factor for this deck’s popularity. Bless Priest was the only counter to Beast Hunter we identified last week, so it was expected to rise to some degree. As you drop down the rank brackets, you see less of Bless/Naga/Thief and more of Quest Priest.

Thief Rogue is rising in play, while Edwin Rogue is in decline. We’re also seeing a shift within Thief Rogue, as 30-builds are picking up traction and rivaling the popularity of Renathal builds. We’ve now had a chance to compare the two and determine what’s better.

Druid has continued its decline throughout ladder, with both Ramp and Aggro Druid dropping in play. It’s still the most popular class at Diamond 5 and below but takes a more middling spot as we reach legend ranks.

There is increased interest in Imp Warlock at all levels of play, with the archetype returning into a strong position in the meta. Most builds run the curse package, but new Denathrius builds can also be found. Not much else is going on with the class.

Control Shaman is settling into a modest play rate throughout ladder. It’s always there at every rank bracket, but you never see too much of it.

The Mage bleeding has stopped. Spooky and Big-Spell Mage are visible, though decline at higher rank brackets and become less noticeable.

Not much activity within Warrior and Paladin. Both Charge and Enrage Warrior are in decline. Some players are trying Renathal Control Paladin builds. 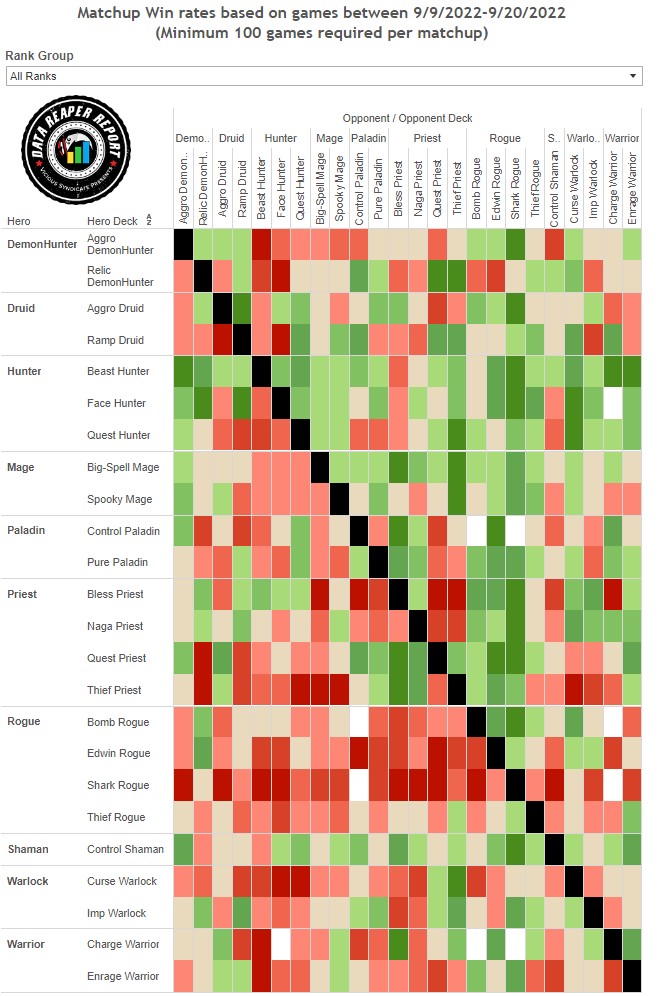 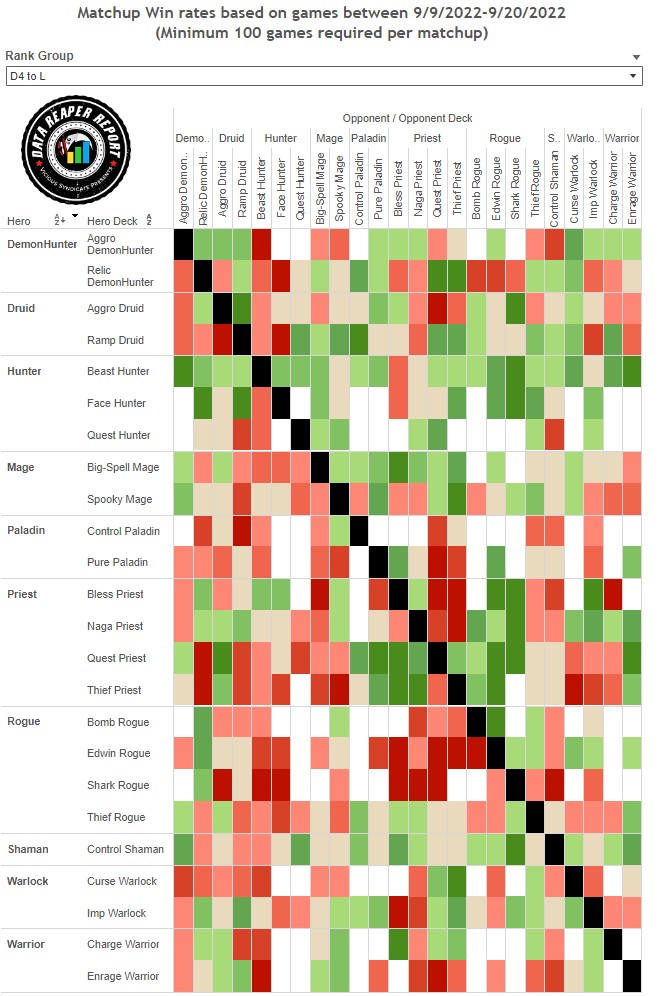 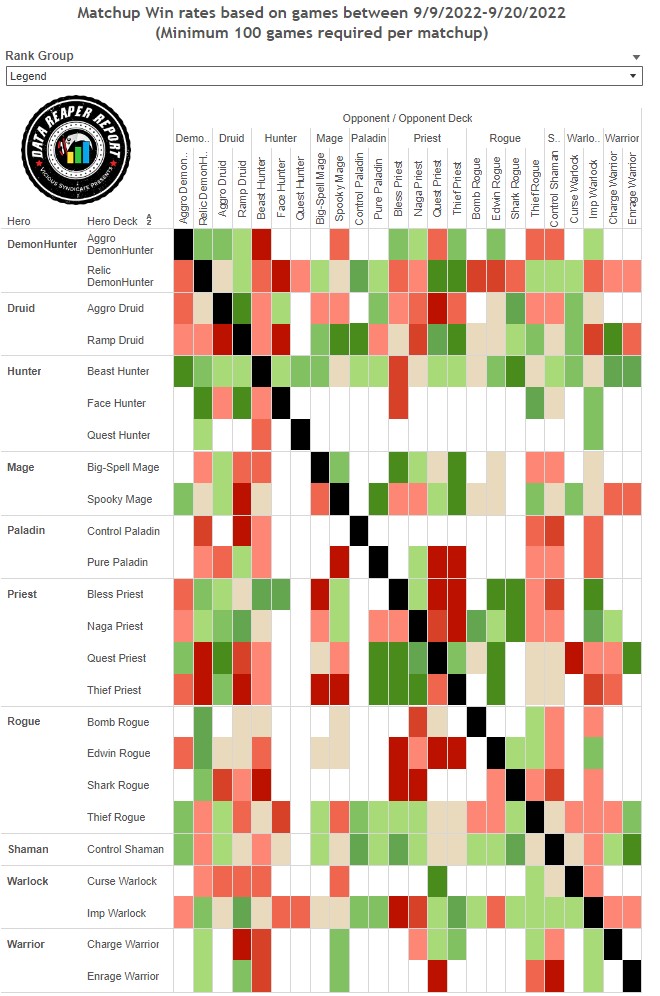 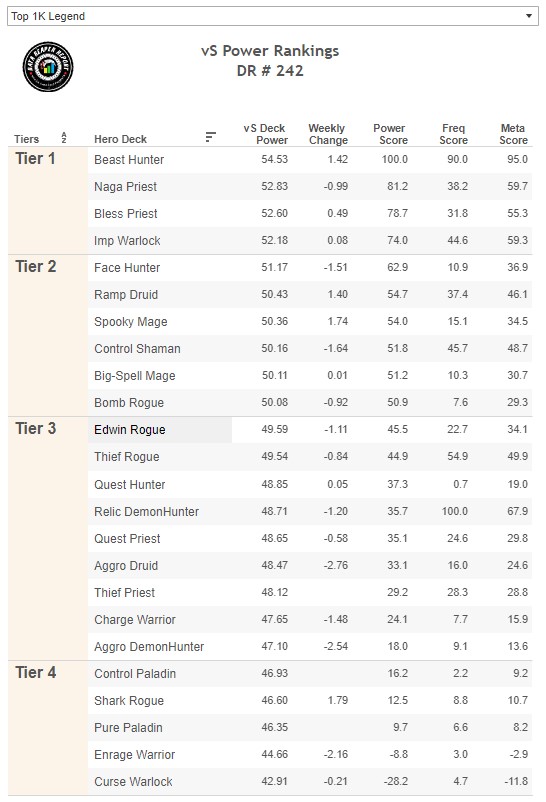 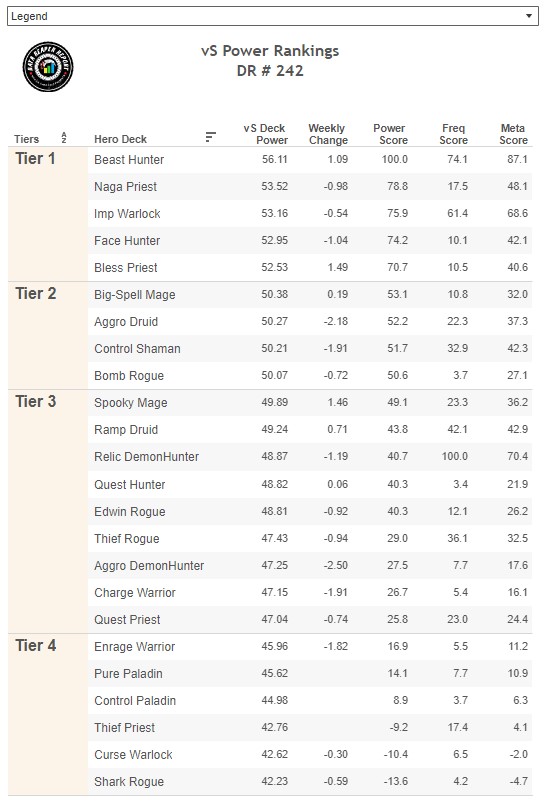 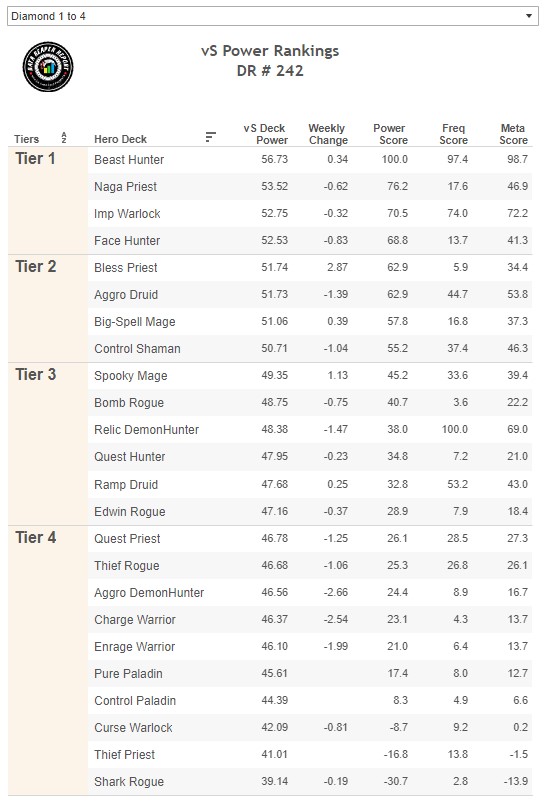 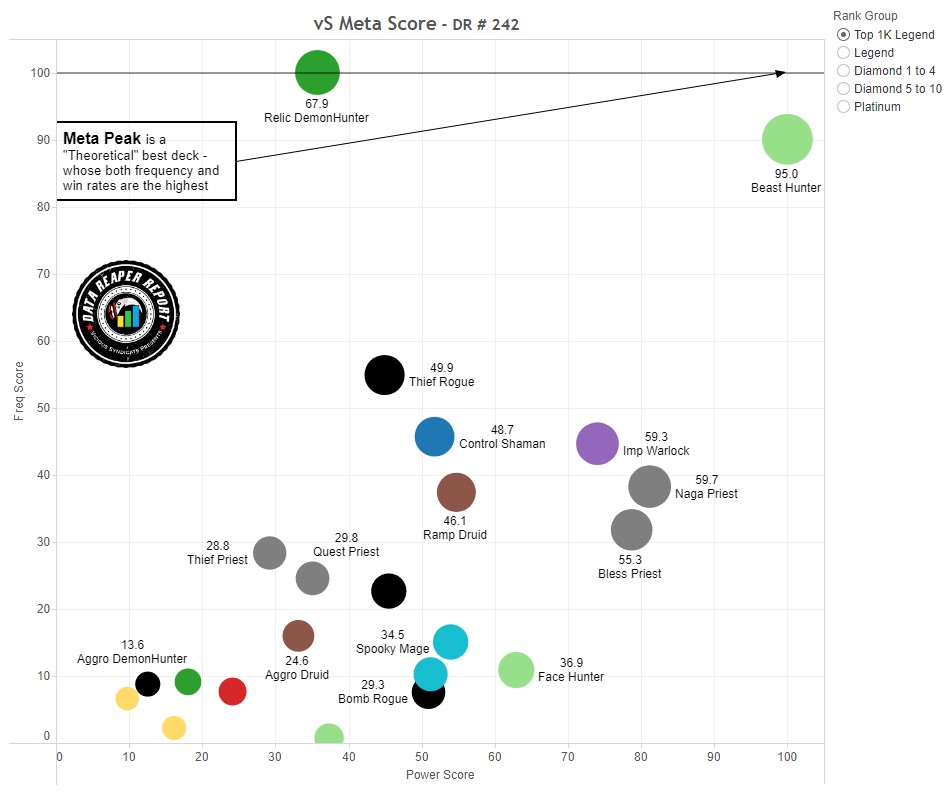 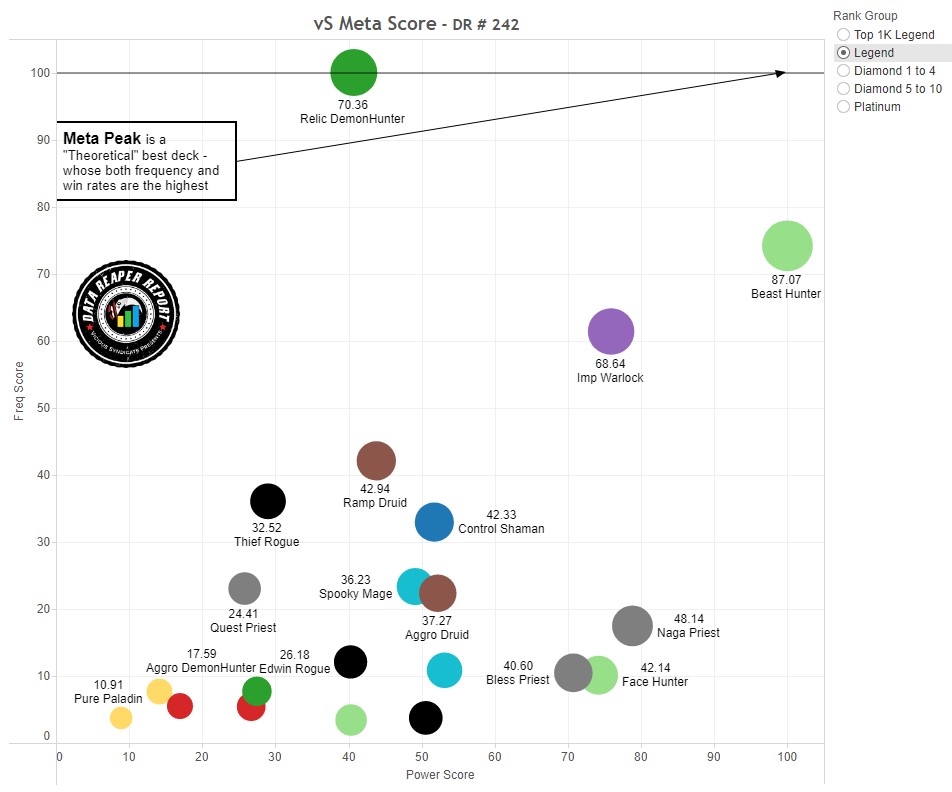 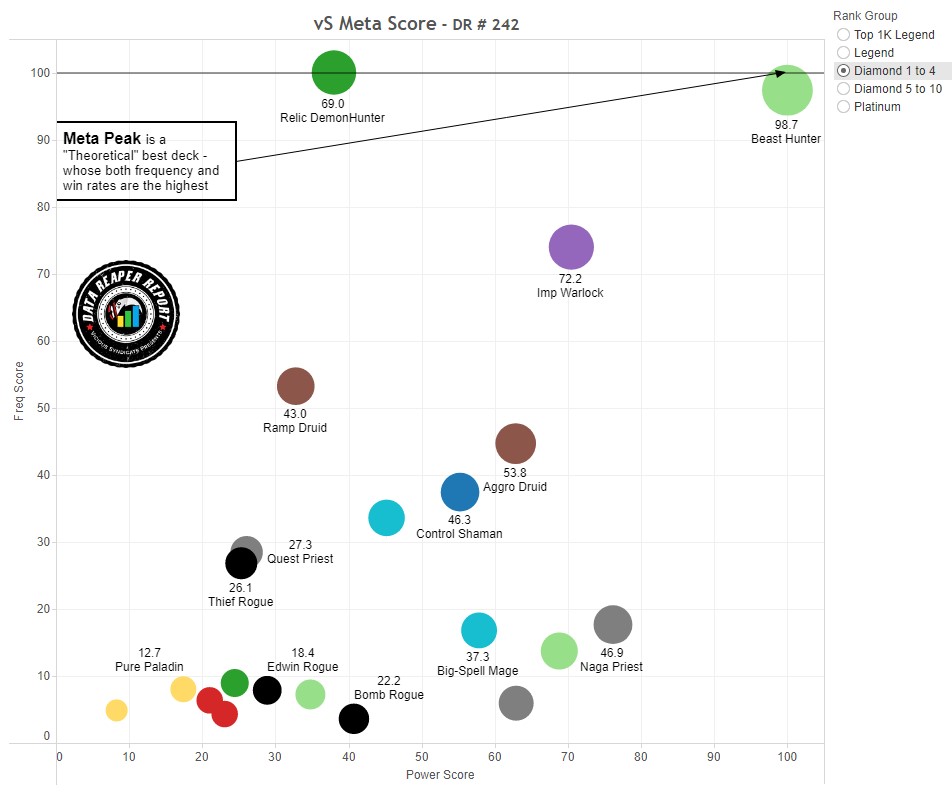 Turns out that Beast Hunter had ways to get even better. The Alternative Beast Hunter list we’ve featured last week looks straight up broken. What’s interesting is that its Imp Warlock matchup turned out to be much better than the common build despite cutting Samuro. Instead, the Hunter is greatly rewarded for having a stronger early game to pressure the Warlock and prevent it from comfortably generating curses.

Aggro Druid is the only matchup in which the new build loses about 5%, but there are gains across the board in almost every other matchup (Relic DH, Ramp Druid, Spooky Mage, All Priests, All Rogues, Control Shaman). You want to run the new build, no question.

There is a common suggestion from players that Insatiable Devourer should be cut from the deck. Our response is… devour deez nuts. You hit yourself with a big penalty by cutting both Devourers in the current format.

The Jace/Fel variant of Relic Demon Hunter didn’t start off this patch particularly well and looked inferior to the Standard builds, but this may have been the result of lack of refinement. The script has been flipped and we now recommend running it over all other builds.

McBanterFace might have been the one to make the breakthrough by including Xhilag in Felic DH. Xhilag was previously omitted from this variant, and this looks to have been an error as the colossal is an important win condition for the deck. Blademaster Okani is another card that isn’t common in the variant but probably should be. Starfish is an alternative tech choice if you’re seeing a lot of Naga/Bless Priests.

The higher you climb ladder, the better ‘Felic’ is compared to ‘Relic’. We estimate that the featured build is the best one from Platinum and above.

Cutting Kryxis from Aggro Demon Hunter looks like the correct move, and the featured build is a lot better than what the aggregated data for the archetype shows. The difference is around 2-3% in overall win rate, so Aggro DH should be close to a 50% WR when optimized. Most builds just don’t run enough 1-drops and waste their time on Kryxis, and it’s absolutely killing their performance.

Thief Priest is the latest strategy to emerge within the class. It’s an attrition-based strategy that looks to grind out the opponent without having a clear finisher, which is where it’s different from Quest Priest. The absence of a clear game plan and the need to pivot your lines of play according to the cards you steal or generate makes it more difficult to pilot compared to Quest Priest. It’s also highly dependent on certain matchups (Naga/Bless Priest) to see success, as it’s an extremely polarizing deck that gets destroyed by late game strategies with high inevitability (Relic DH/Ramp Druid/Spooky Mage).

There’s not much wrong in the most common build, innovated by Glory and popularized by Bunnyhoppor. No cards are outright terrible, though Brann and Murozond would be the first two cards we would cut to make way for any experimental additions.

Naga Priest remains very well positioned. Its rise in play has invited some counters, mostly coming from its own class. Bless Priest has grown stronger due to its strong matchups against both Beast Hunter and Naga Priest, the top two decks in the format. It is the only way to reliably counter Beast Hunter.

After an additional week of data and the growth in popularity of Thief Rogue without Renathal, we can say that 30 is better than 40. The gap in power grows the higher you climb ladder, as Rogue becomes more reliant on finding its power spikes rather than survive and grind the opponent out. It seems that Renathal carries some perception of power that’s hard to shake, causing it to sneak into archetypes through inertia and without much merit.

Turns out the deck that wants to execute Jackpot/Trickster scams, wants to draw this combo more often. The 30th card is either Sprint or Denathrius. It’s very close between those two cards and it’s hard for us to decide. Denathrius is dramatically better against Mages, Quest/Thief Priests, and other Thief Rogues, but Sprint is better in most other matchups (DH, Druid, Hunter, Shaman). Yes, Denathrius works fine in a non-Renathal build and without Shadowsteps.

There are no unexpected side effects to cutting Oracle and Ivus from Ramp Druid, so the defensive build from last week seems to function well. Aggro Druid is okay, though clearly losing some steam because meta developments are not treating it well.

39 cards are locked down in Control Shaman, and both Murloc Holmes and Raid Boss Onyxia are good enough to be the 40th. Average game length of Control Shaman is around 9.5 turns, so Onyxia has enough uptime to be a relevant card, and she’s usually very impactful once you get there. Has good synergy with Denathrius and Devourer. Murloc Holmes looks a little better post-patch since the meta slowed down after the nerfs.

Spooky Mage has recovered and looks like a 50% win rate deck throughout ladder. 30 and 40 versions are equally viable. No changes in our recommended Big-Spell Mage list. The class doesn’t see as much play because it was nerfed, but it still functions well.

It’s not looking good enough for Warrior. The meta seems to have left the class behind and it’s struggling to keep up, staying on the fringes of competitive viability. No further room for innovation in either Charge or Enrage Warrior. Both are flawed strategies that need new cards to compete.

Paladin might be alive after all! A new build of Control Paladin running Renathal and Denathrius popped up and is showing promise. The promise is a potential power level comparable to Control Shaman, and we do see a lot of similarities between the two decks. This build has a close matchup with Beast Hunter and Relic DH, while beating Naga and Bless Priests thanks to Equality and Righteous Defense. Knight of Anointment means you draw those key removal pieces more often. The late game is less versatile than Shaman’s, but you still have finishing potential through Lightforged Cariel, Mr. Smite and Denathrius. It’s an uninspiring but effective 40 health minion pile.

We can only imagine what would happen if a Rogue/Druid/Mage/Priest deck displayed the kind of power and matchup spread that Beast Hunter is currently displaying. That deck would probably see twice Beast Hunter’s current play rate and choke out the format.

Thankfully, Beast Hunter is a deck that runs a ‘fair’, board-based playstyle that isn’t visually striking, nor does it draw significant ire from those that lose to it. It found the perfect time to dominate, just before a mini-set that’s likely to shake up the format ahead of any talk of nerfs gathering traction. An increase in the power level of the format is also likely to temper the dominance of this deck, so we’ll have to see just how powerful the upcoming cards are.