Welcome to the 212nd edition of the Data Reaper Report! 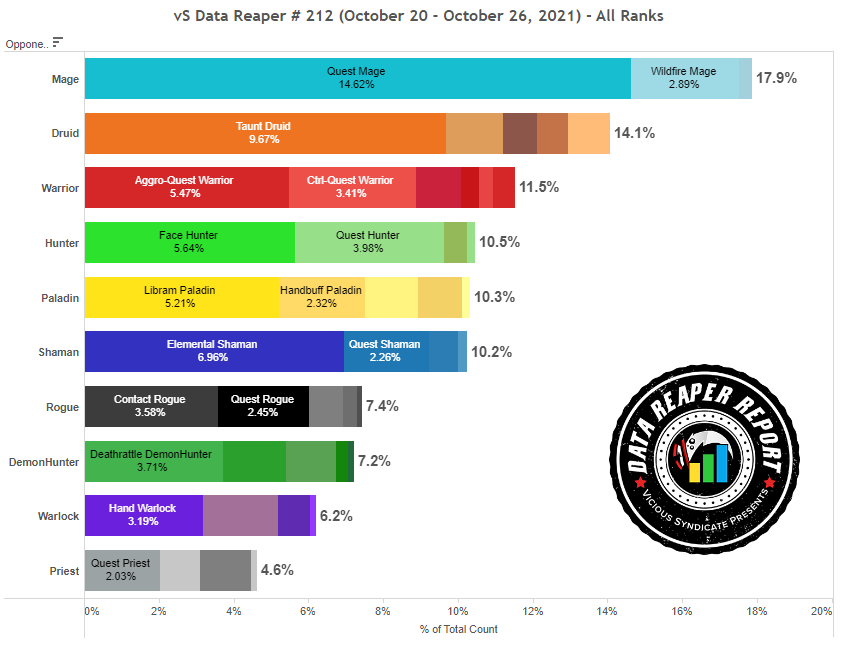 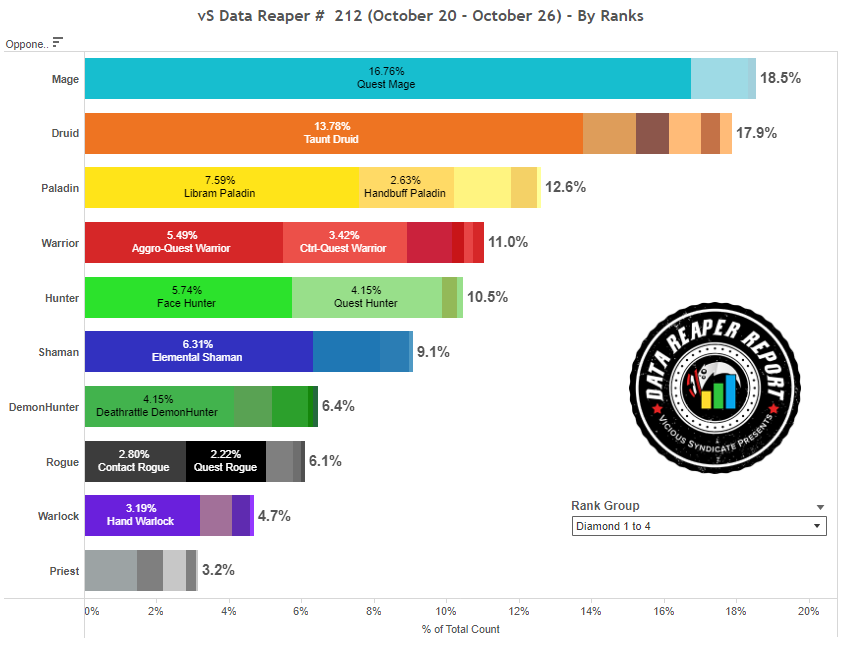 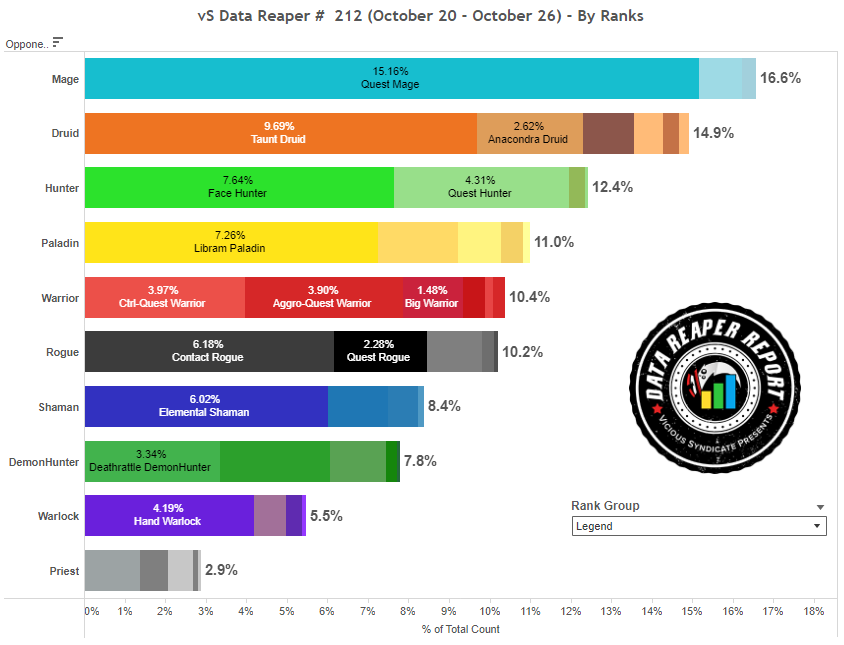 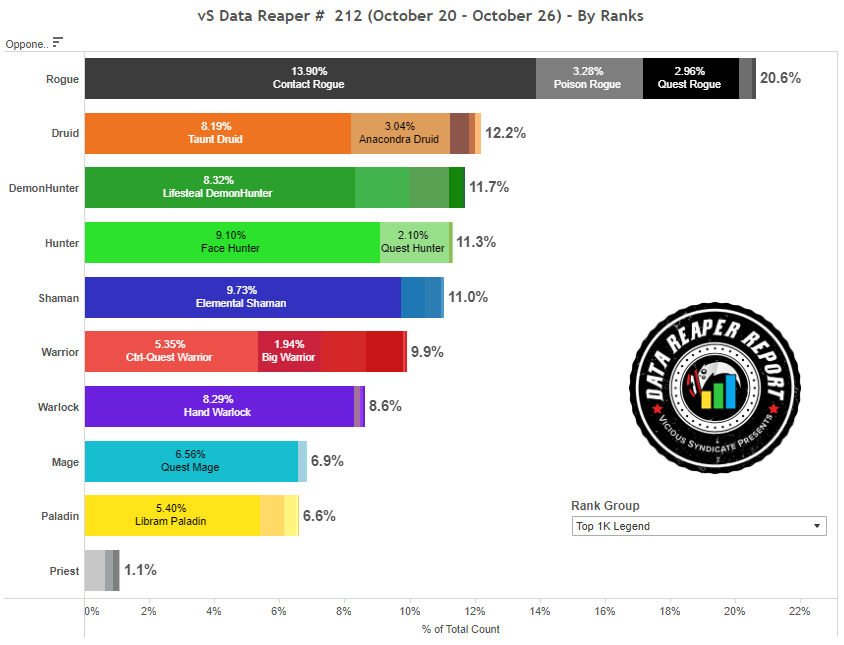 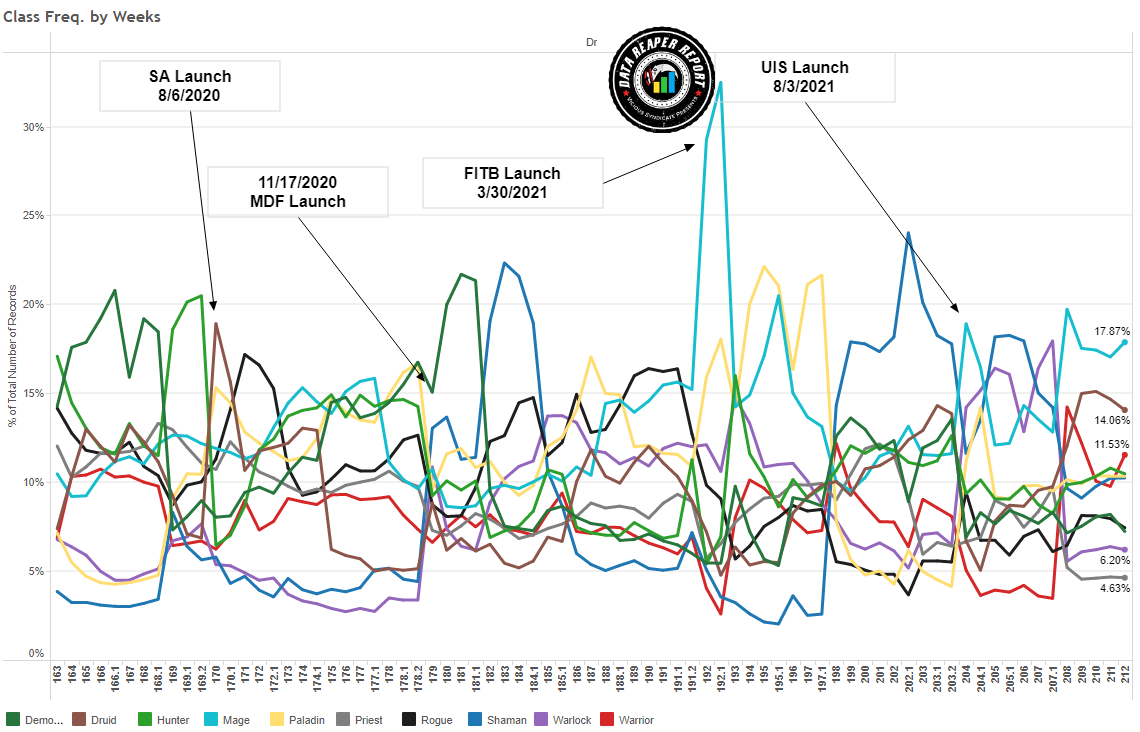 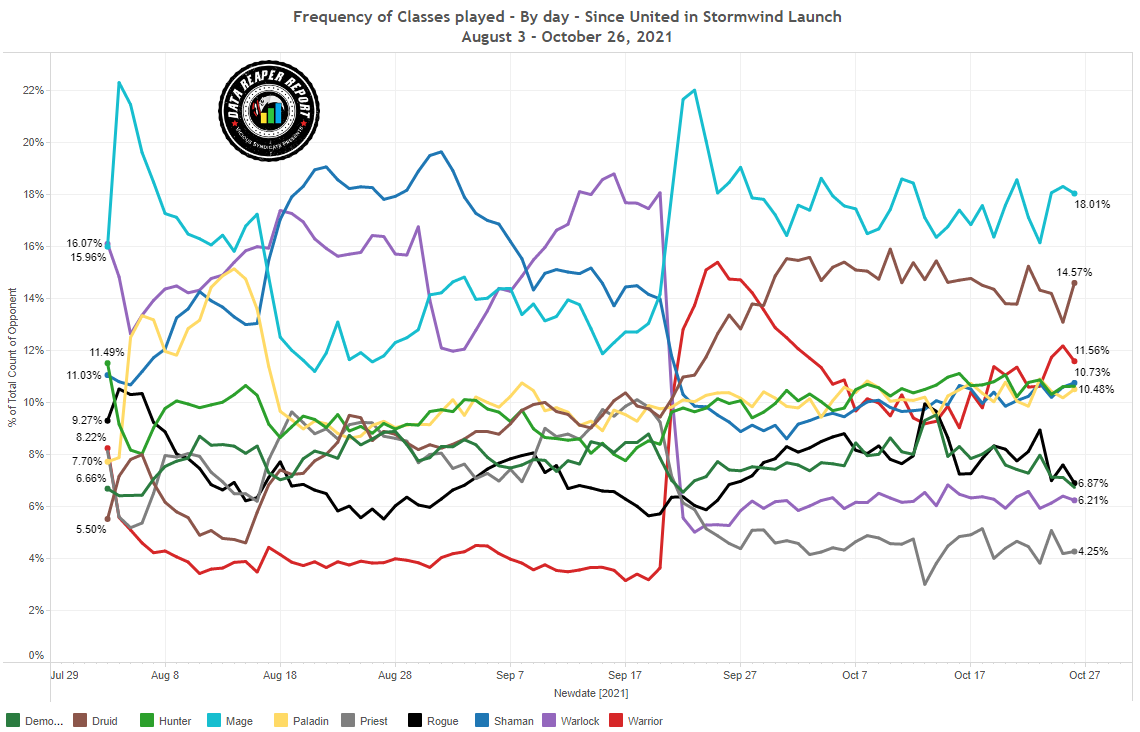 The meta following the last set of balance changes can be split into two. The first is a general ladder meta that is dominated by the supremely mediocre Quest Mage, a deck that somehow increased its presence this week. The player base’s fascination for this deck and its perceived power is Hearthstone’s opium of the masses.

The second is a top legend meta where Quest Mage is even worse, and though it still sneaks in with a visible presence that gives it more credit than it should, Mage becomes more of a bystander looking at a balanced field of competitive options available for nearly every class (RIP Priest).

While most classes have stabilized, we will note a couple of trends occurring at higher levels of play, which are likely influenced by last weekend’s Master’s Tour and have sparked small shifts in the field. While other portions of ladder are slightly affected, developments are bogged down by Mage’s high play rate.

Lifesteal Demon Hunter and Elemental Shaman have grown in popularity. LSDH is a very popular pick to hard counter Contact Rogue. The Doomhammer variant of Elemental Shaman has almost completely taken control at top legend, and has also proven to be effective against Rogue at the highest levels.

The biggest change this week is coming from Control-Quest Warrior, an archetype that’s currently spiking in popularity at top legend and also trickling down through the rest of the ladder in smaller numbers. It has eclipsed the play rate of its Aggro counterpart at legend, and there are some new tweaks to its builds. 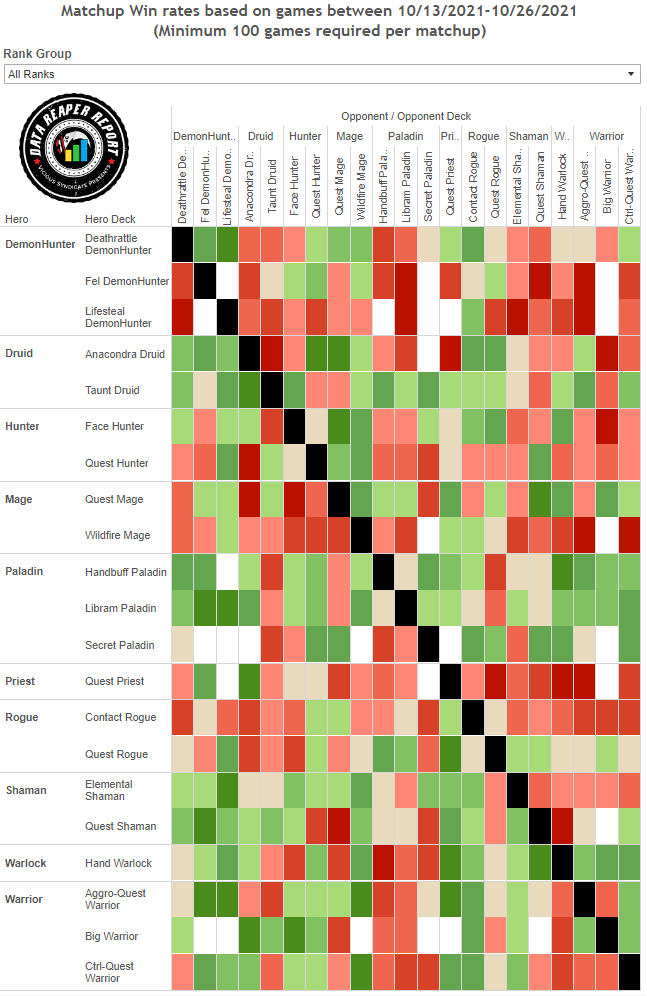 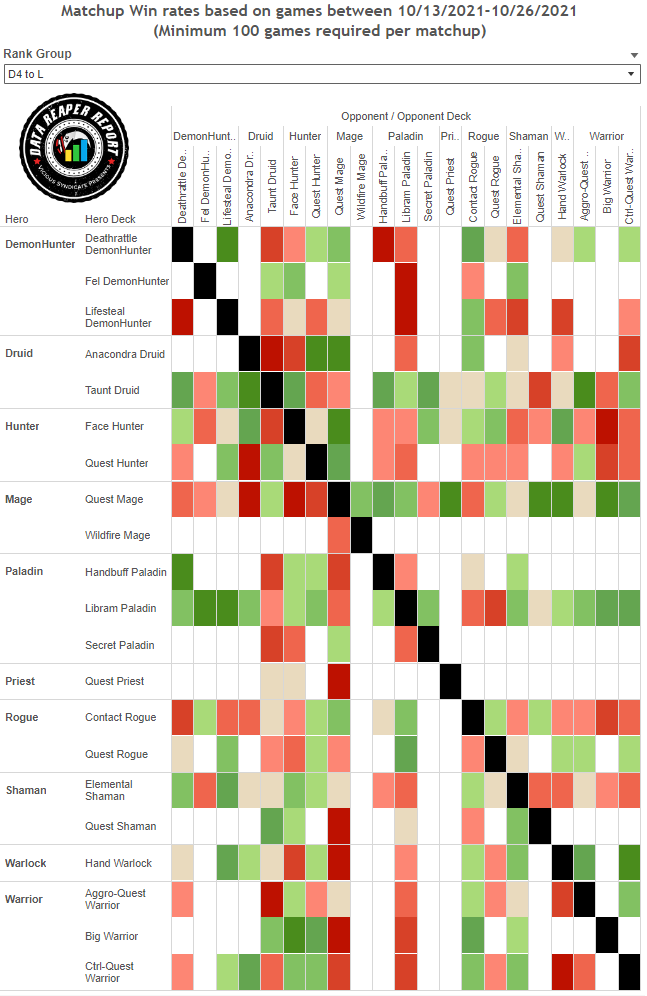 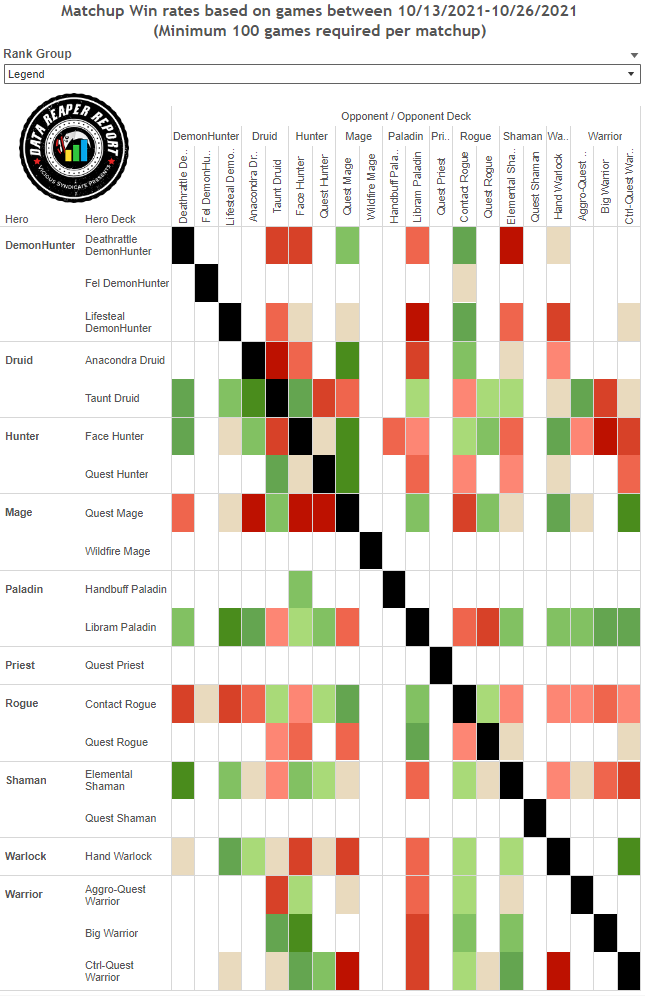 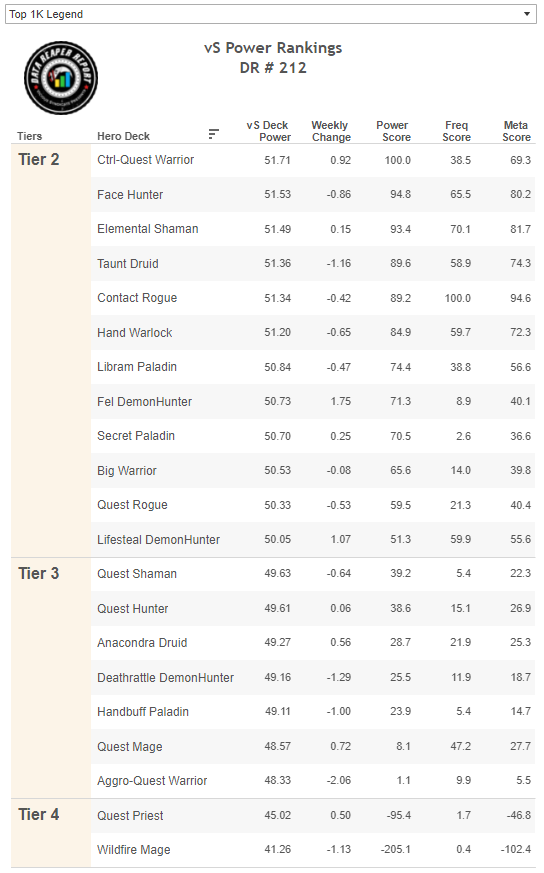 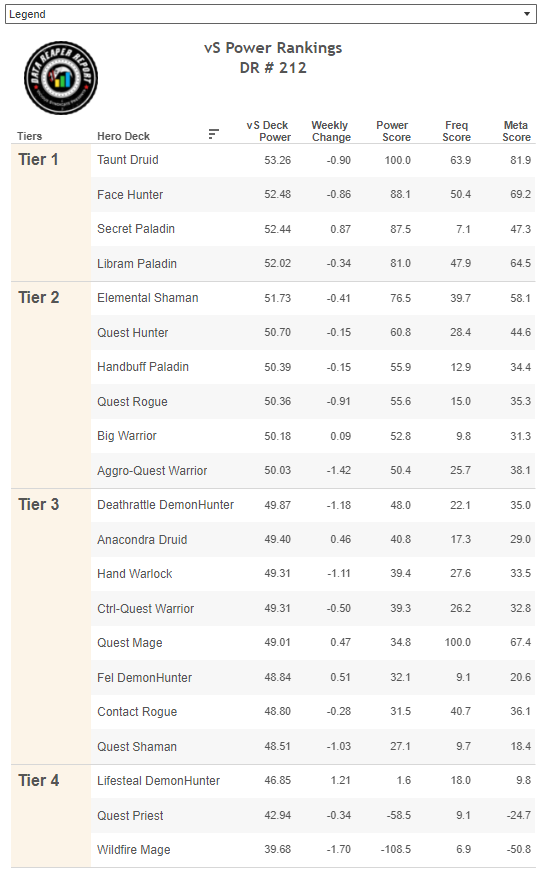 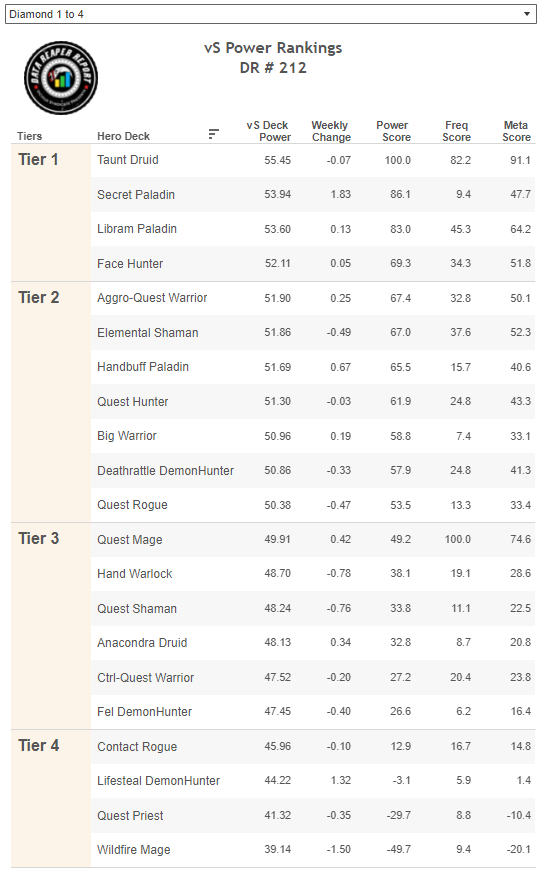 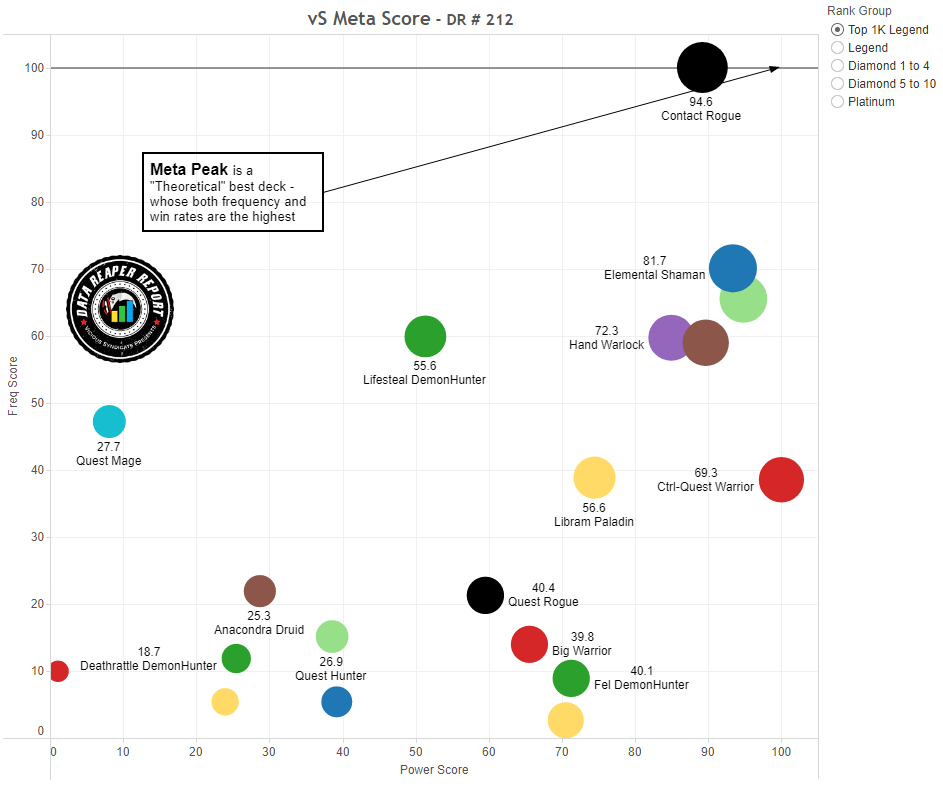 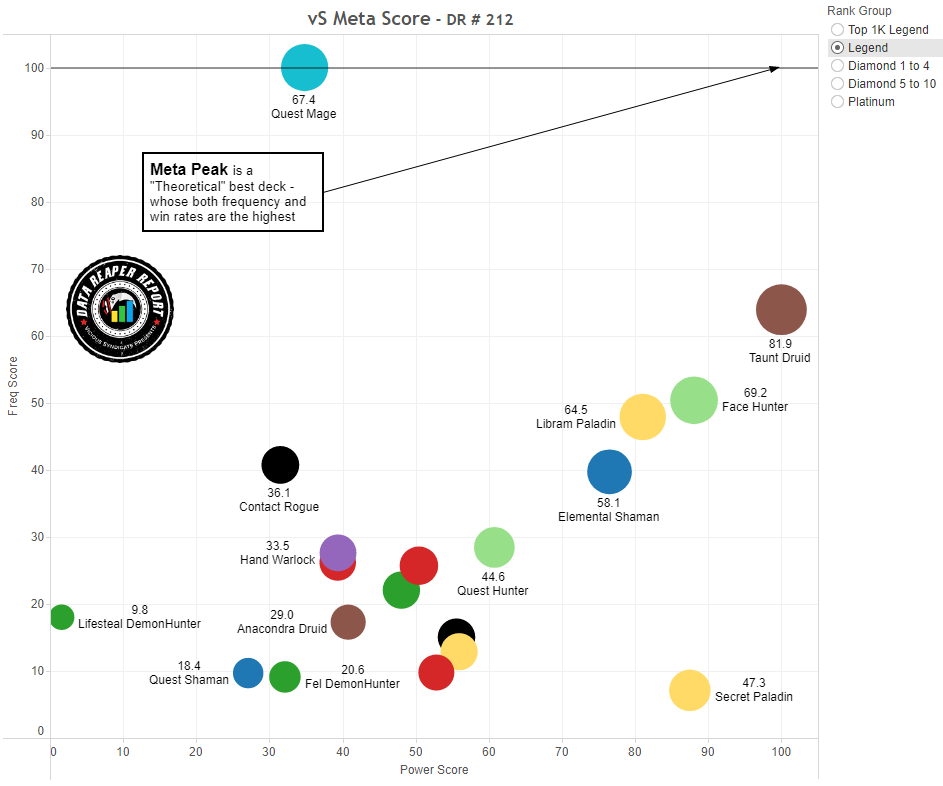 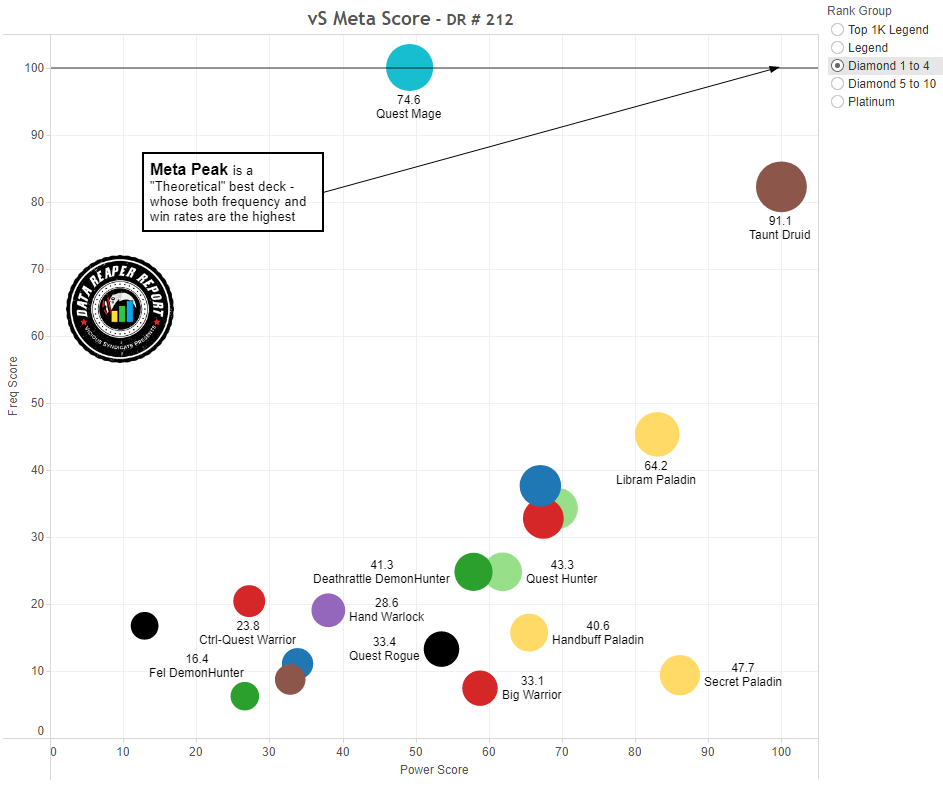 The Power Ranking table at top legend shows remarkable balance in the field’s win rates, which is not too different from the balance exhibited by its play rates. Once again, the Tier 1 bracket is empty. There are no power outliers and decks of every kind, shape, and style are successful. Contact Rogue might be a very popular choice, but it’s starting to get punished for it due to the rise and increased success of Elemental Shaman and Lifesteal Demon Hunter.

The Power Ranking table at other rank brackets is unlikely to ever be as flat, but even there, plenty of successful options are available and the most popular deck (Quest Mage) is nowhere near the best choice. The main difference is that Mage’s highly inflated play rate discourages the success of slower strategies. That is certainly a long-term issue considering that the deck refuses to go away even when it’s mediocre, or worse.

This brings us to the star of the week. Control-Quest Warrior would never be able to thrive in a field where Quest Mage is stupidly popular, but it’s finding incredible success where it’s not. It performs well against Rogue, Hunter, and Shaman. It even forces a surprisingly tight matchup against LSDH.

We’re once again skipping class sections this week, but we will note two other findings that spilled over from tournament play regarding the two other emerging archetypes of the week. Bolner looks like a superior card to Inara in Doom Elemental Shaman, and Magtheridon is an interesting tech card in Lifesteal Demon Hunter, though you probably still want Viper over it considering the rise of Doomhammer.

We expect the mini-set to finally arrive next week, so the report will be on break, but we’ll still be around in podcast form to give you the details on the emerging new meta.

We can only hope that something happens that strongly discourages Quest Mage’s presence, so we could see some of the top legend diversity spill over to the rest of ladder.

Below is an example of that diversity.