Welcome to the 218th edition of the Data Reaper Report! 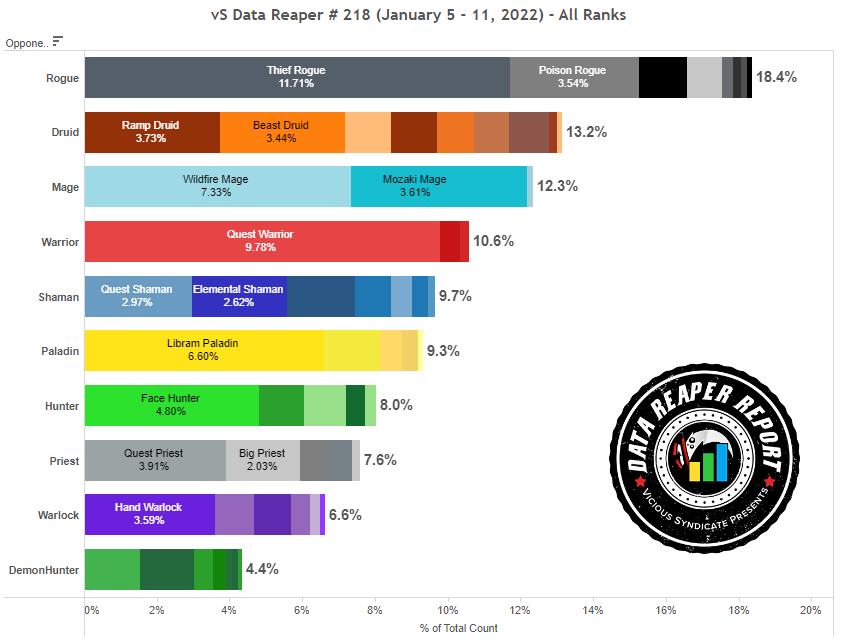 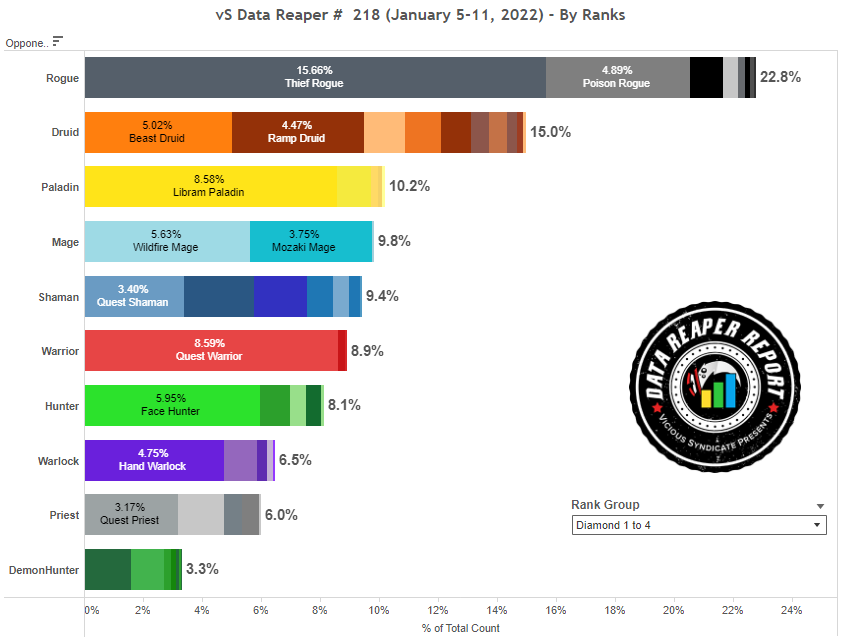 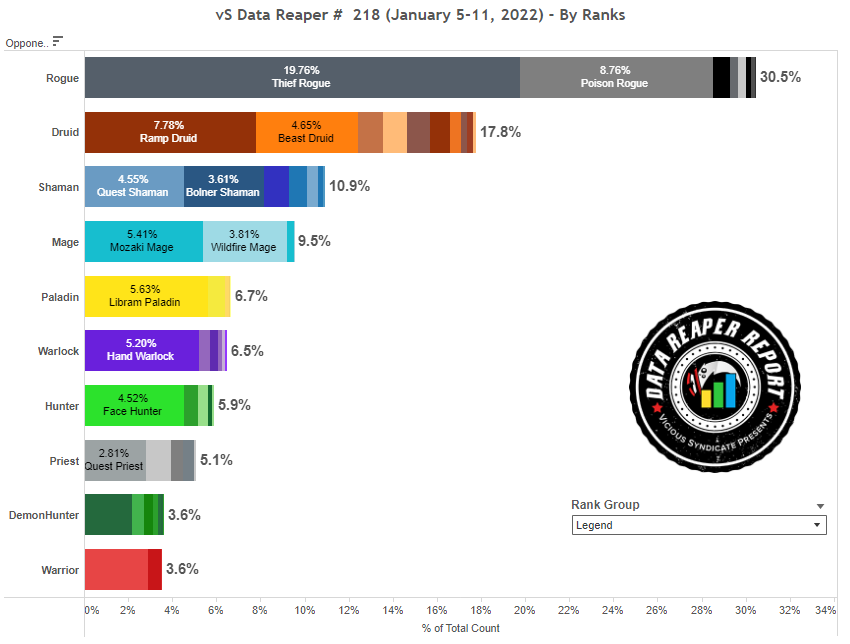 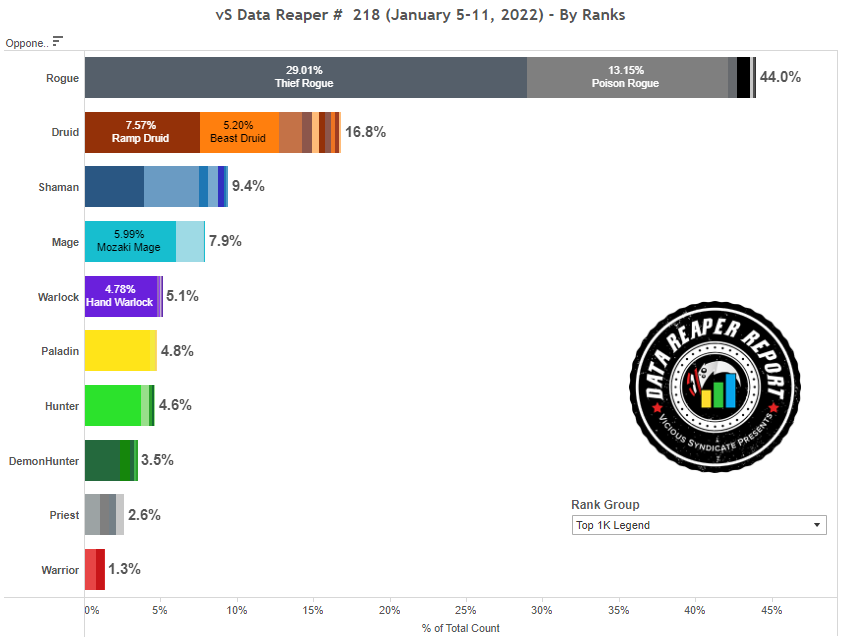 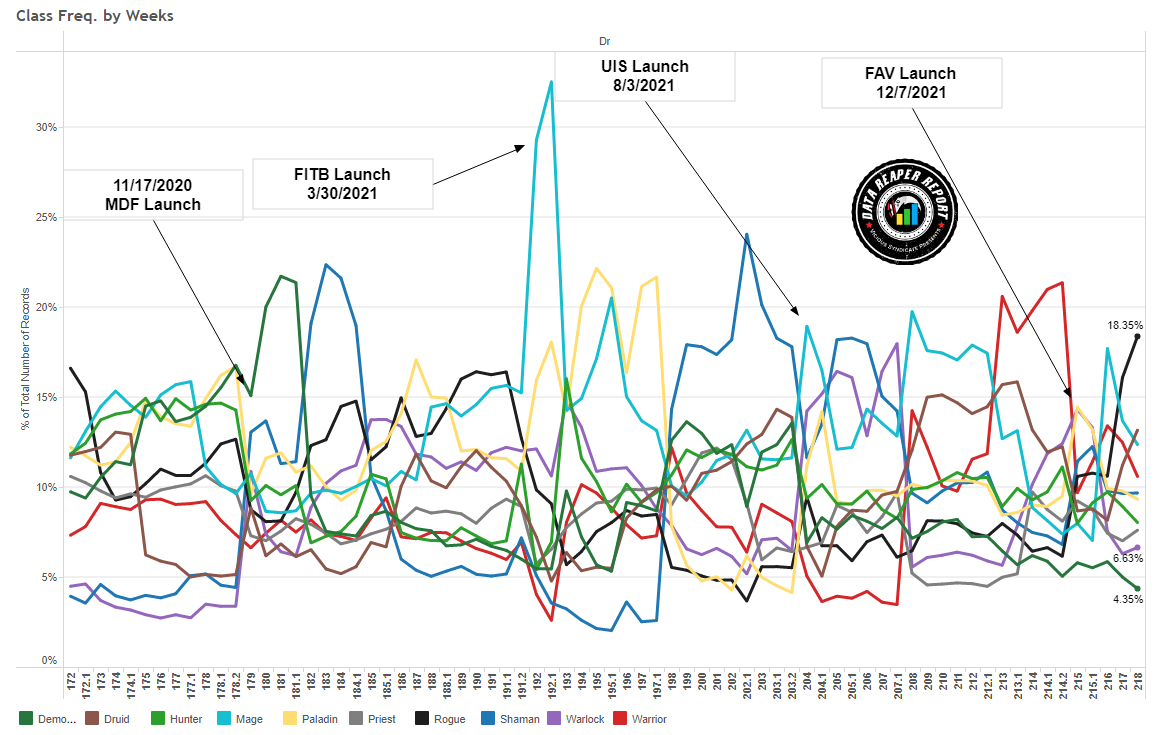 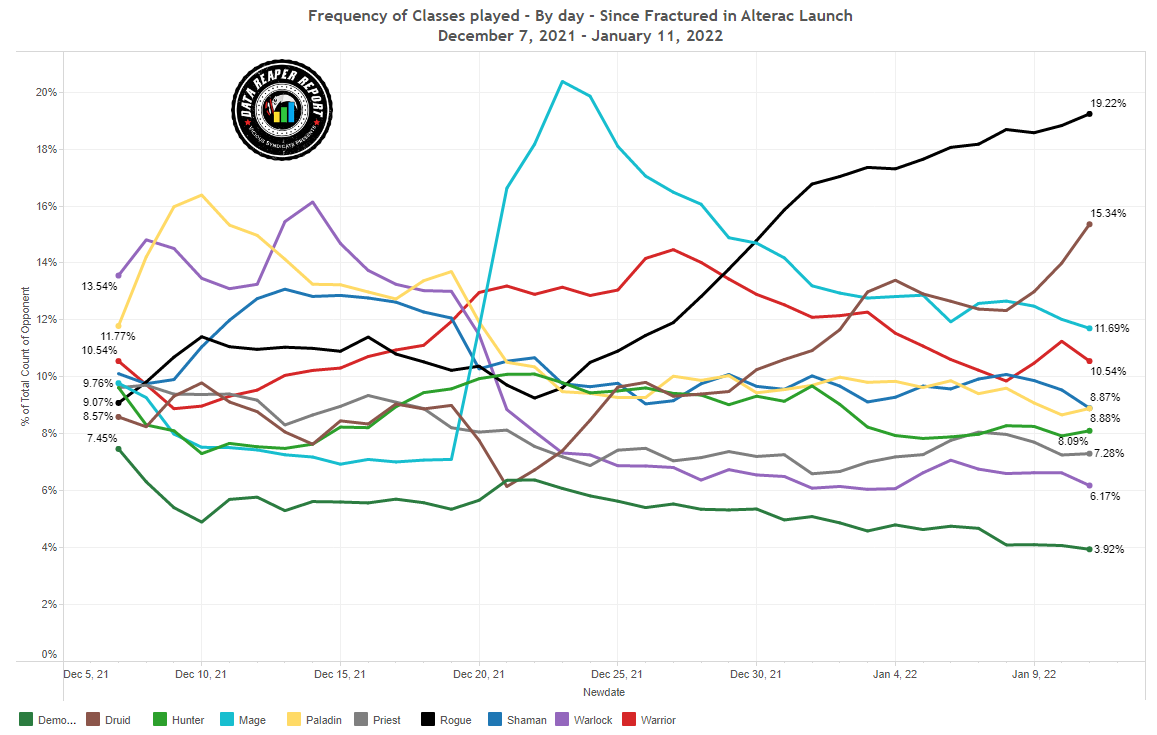 We’re entering Apocalyptic levels of Hearthstone oppression. The format is withering under the outrageous pressure of Rogues. Thief Rogue is more popular than any other class by the time you enter Diamond 4. The Rogue class reaches a 30% play rate at legend and is on its way to achieve a 50% play rate at top1k legend. With ladder relevant for the competitive scene and players trying their best for top ladder finishes, Rogue’s play rate has very likely eclipsed 50% play at top 100 according to our estimate. The further rise of the class is mostly attributed to Poison Rogue, which has begun to spike very hard in play a few days ago, birthing a new variant that runs Maestra. Yes, Masquerading Poison Rogues running Wildpaw Gnolls have arrived.

The less is said about the rest of the field, the better. This report will be relatively short, as nearly every other class is crumbling. There are almost no significant developments to speak of, with the format screeching into a halt, unable to answer the most burning question: can anyone stop Rogues?

Perhaps Druid is the only class that is experiencing increased interest in play inside the desecrated tavern, with both Ramp and Beast Druid attempting to do something productive.

Bolner and Quest Shaman are gasping for air, trying to keep their head above water, while other Shaman decks have long been submerged. Wildfire Mage’s play rate is hilariously misguided, while Mozaki Mage refuses to go away at higher levels. Handlock, Libram Paladin, Face Hunter and Fel DH are reduced to fringe strategies. You’re statistically more likely to queue into a Rogue disguised as a Priest, than an actual Priest at top legend. And then, you’re twice less likely to find a Warrior compared to a Priest. Quest Warrior is a phenomenon mostly observed outside of legend, where it isn’t a complete joke. 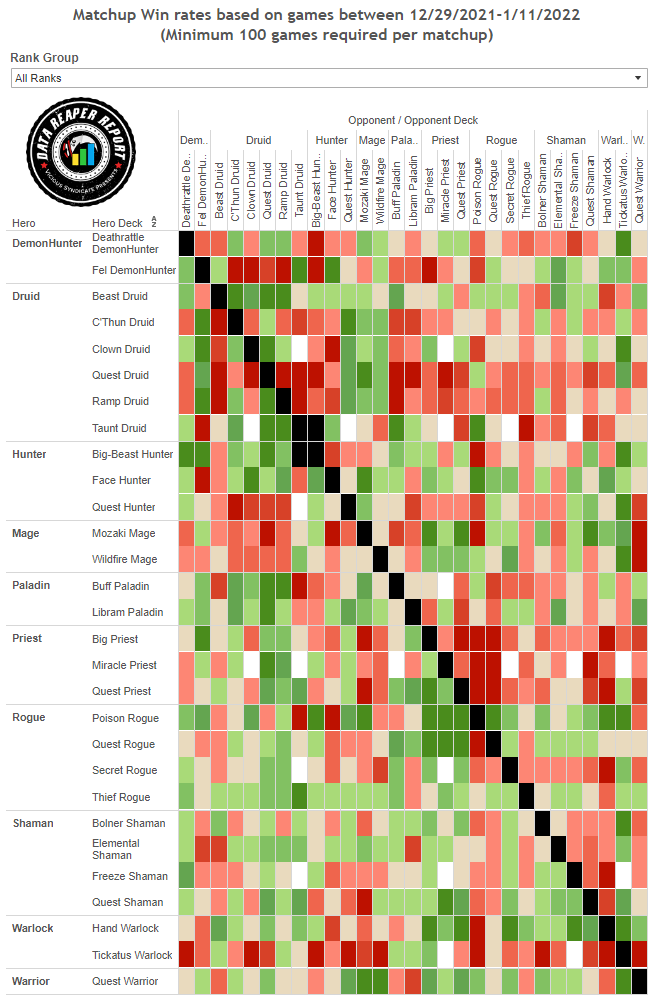 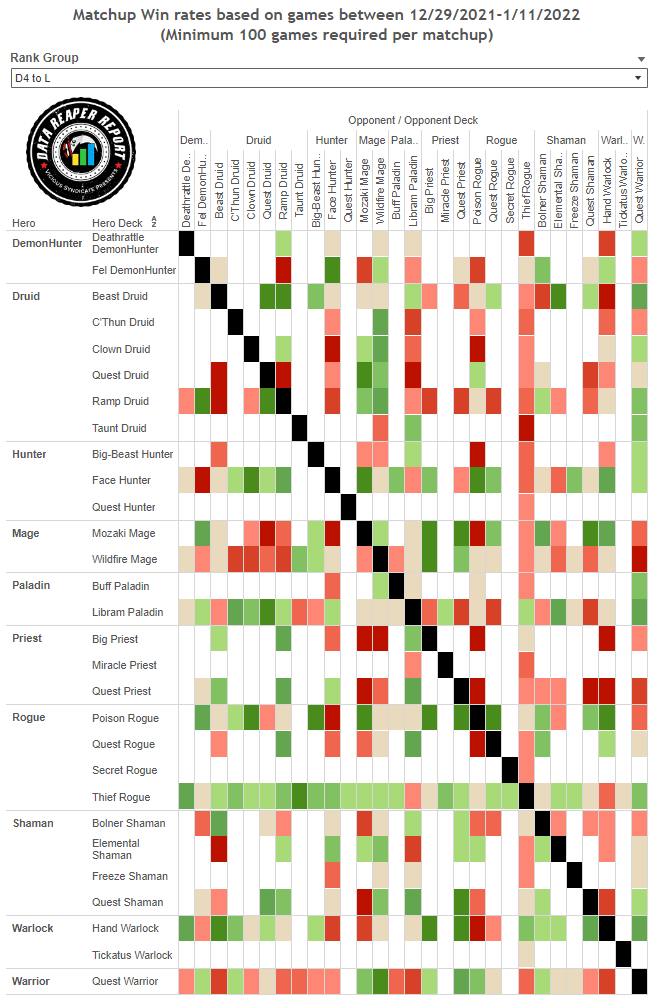 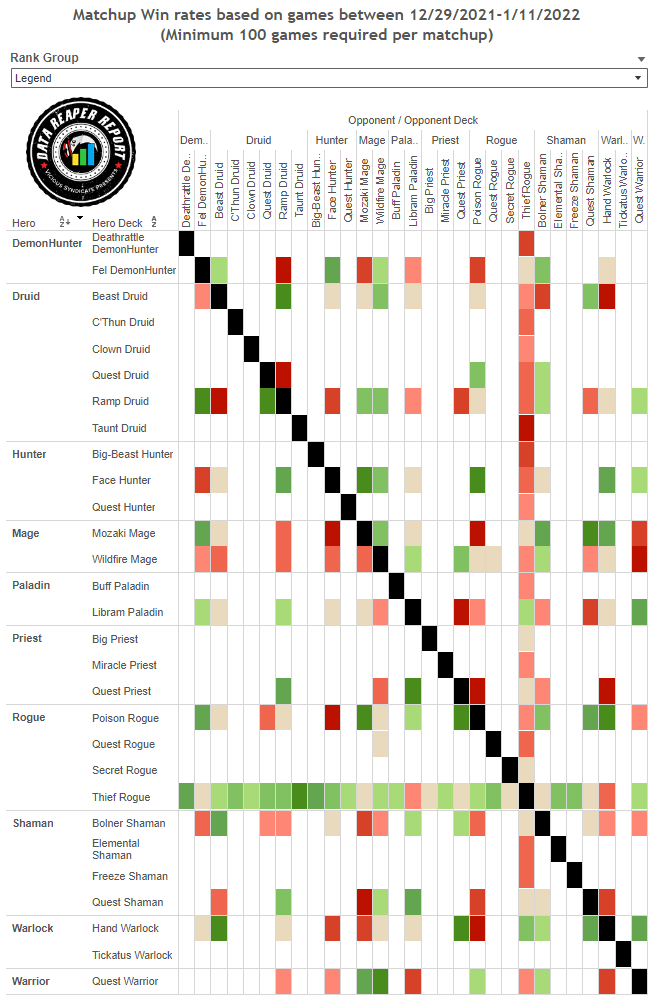 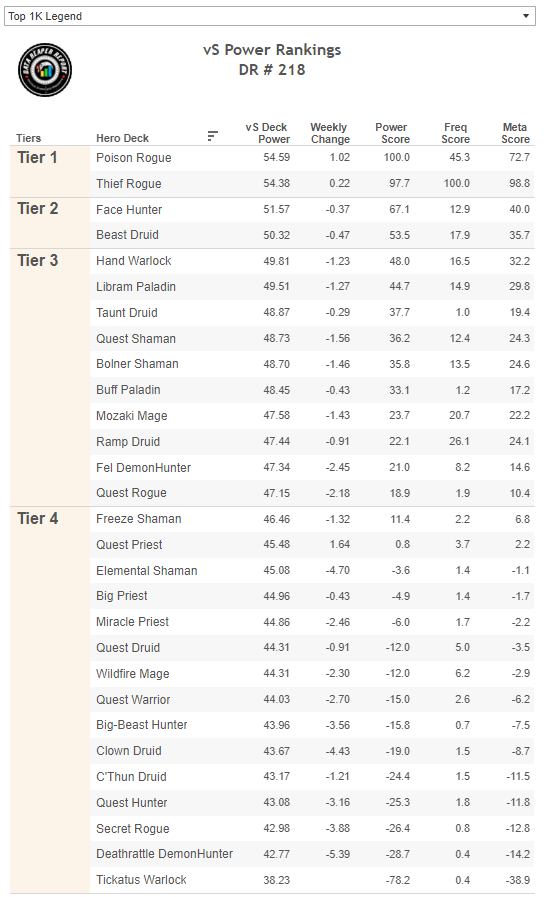 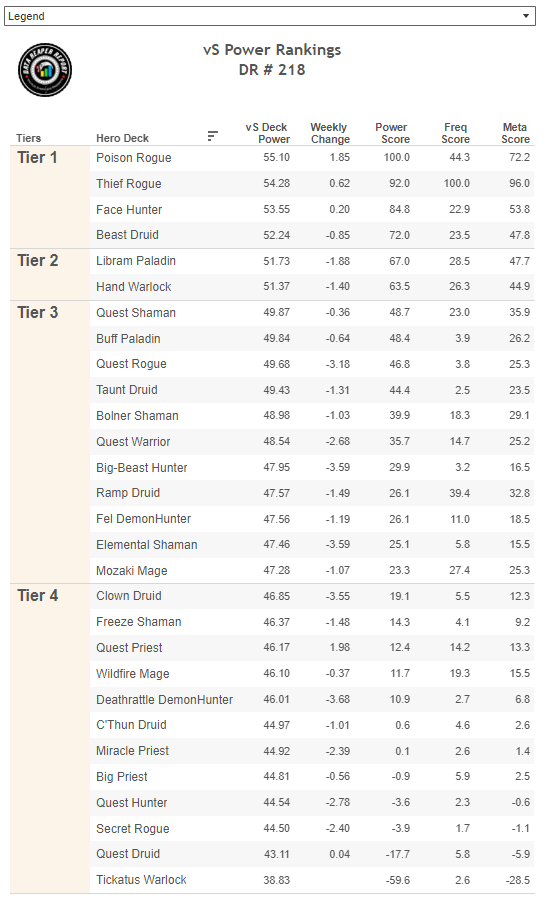 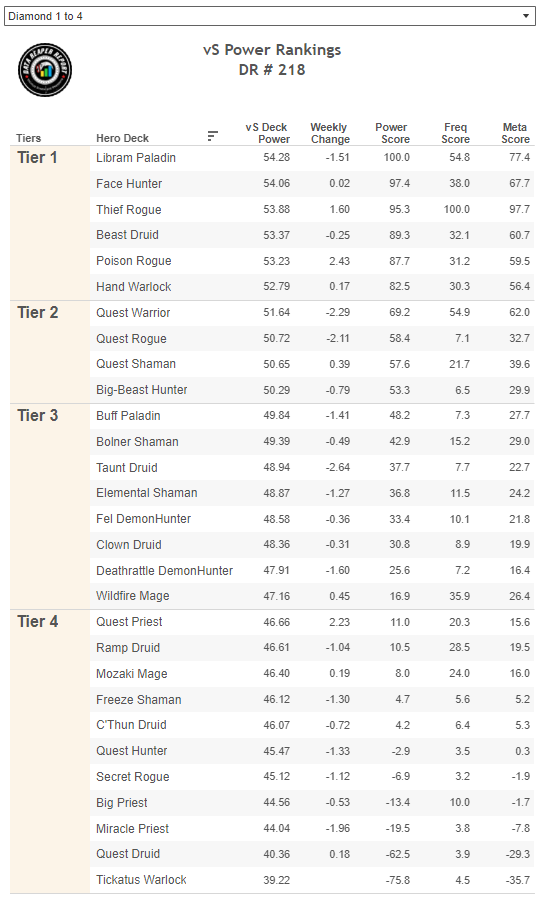 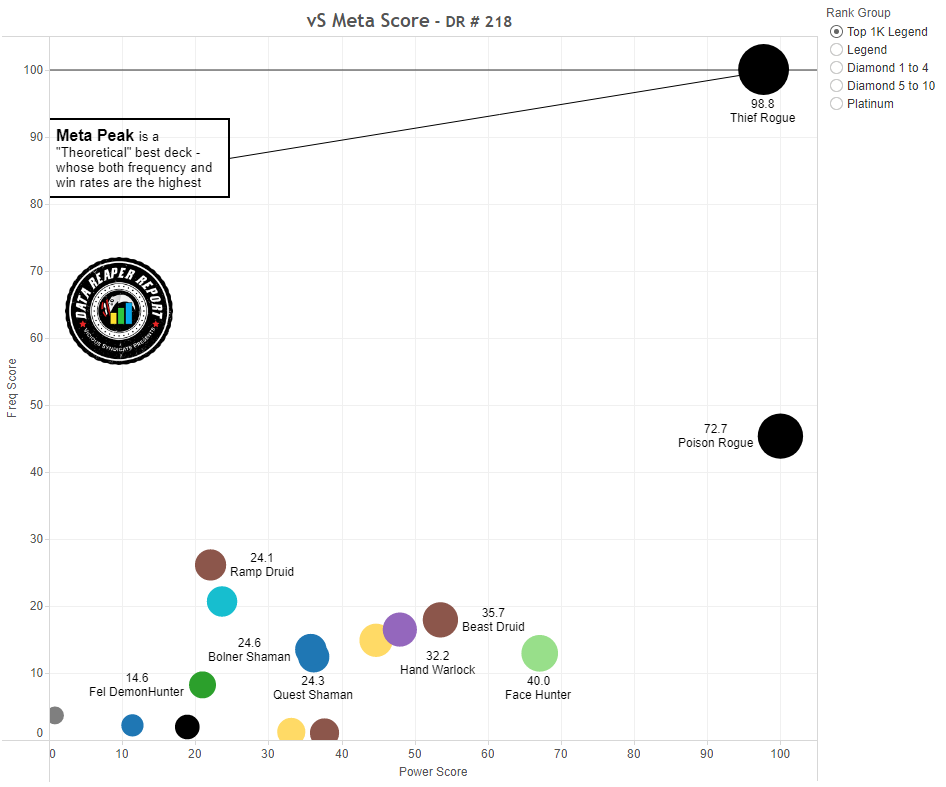 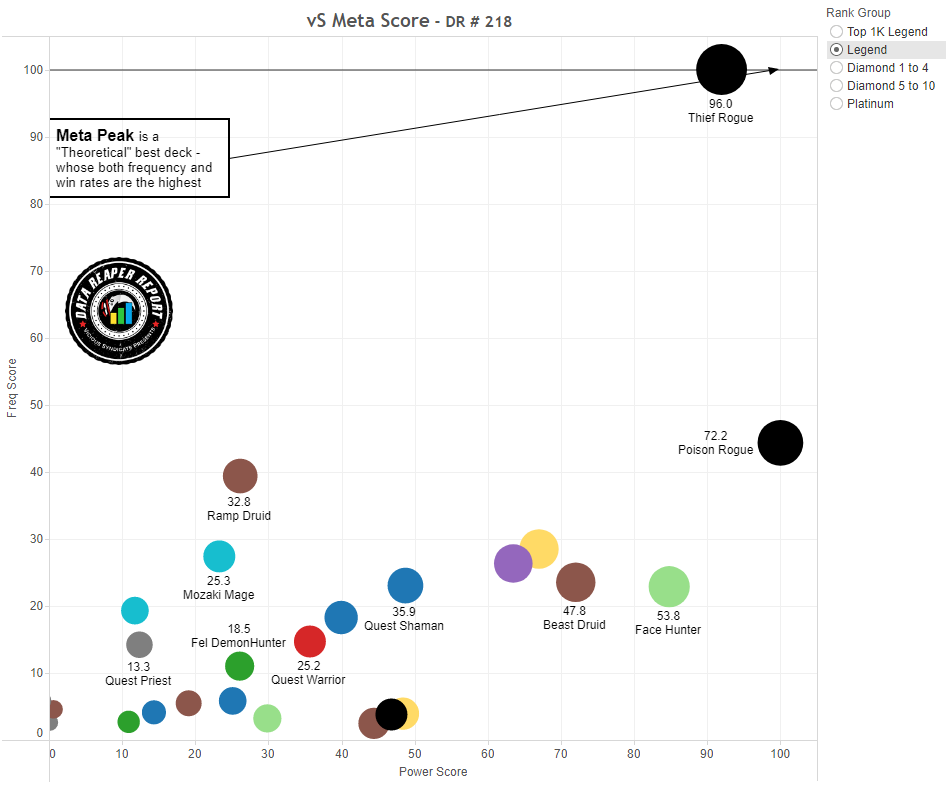 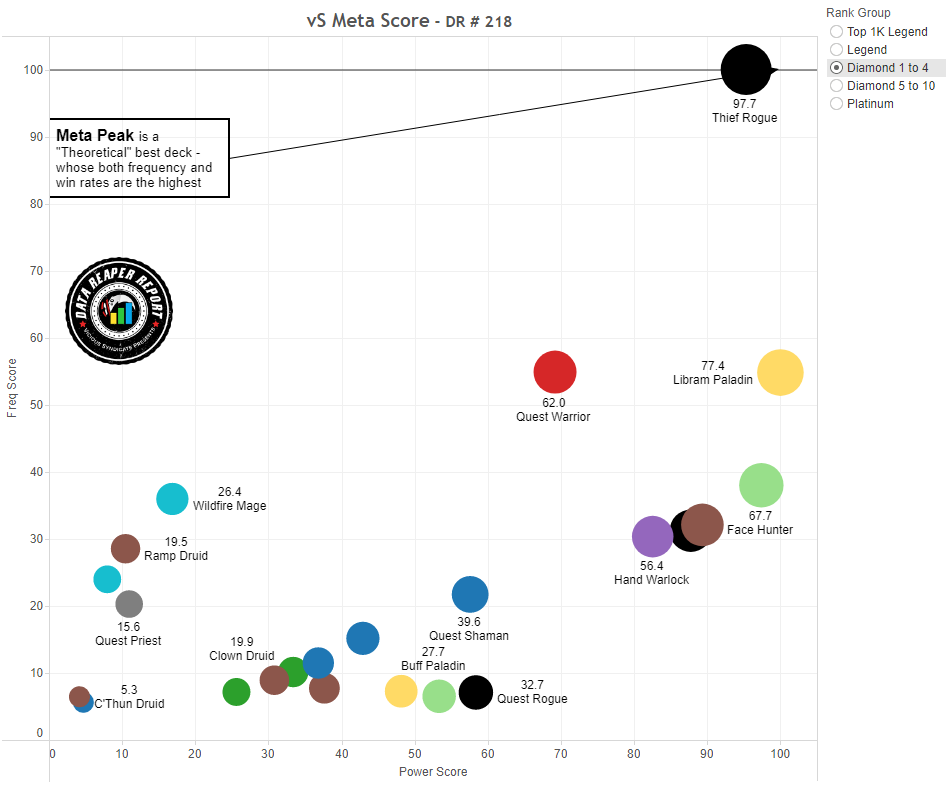 This is game over for the format. Poison Rogue with Maestra and Wildpaw Gnoll is one of the most broken decks in the history of the game. The addition of early Gnolls means that even most aggressive decks in the format cannot reliably beat Poison Rogue, and Gnoll is even more consistent in this deck since Swindle draws it 50% of the time. It gives the deck so much breathing room since it keeps the opponent occupied with defending itself instead of mounting any kind of pressure on the Rogue, and it’s already hard enough to pressure the Rogue when they can chain Cloaks into Scabbs as early as turn 5.

The cards to make way are Sinister Strikes and a Preparation. Tradeables are very important in this build since they’re the only way you can discount Gnolls. We might reach a point where Rustrot Viper starts to make sense as a tech for the mirror (replacing an SI:7 Extortion), but it does make Swindle worse in every other matchup besides possibly Paladin. You generally want to minimize the number of minions and avoid running neutrals in the Maestra variant.

We haven’t identified any Beast Druid build that is superior to the one we’ve featured last week. We dropped Mutanus from Ramp Druid because it’s almost useless against Rogue, adding the 2nd Guess the Weight instead.

Bolner Shaman is a deck that could run double Viper and not be significantly hurt by it. We’ve also added the Lurker Below to help against Thief Rogues. One other minor finding is that Burn Shaman wants to run Bru’kan.

Mozaki Mage should now be running two Ice Barriers if it wants to have any chance of even remotely competing with Poison Rogue. It also helps against Face Hunter, which is another difficult matchup. We’ve dropped Hot Streak (not important) and one Brain Freeze to make way.

Cult Neophytes in Handlock are becoming increasingly important, even outside of top legend. Rustrot Viper is a futile tech for the Poison Rogue matchup because if you’re seeing a high number of them, you’re better off switching decks.

The presence of Poison Rogue has always made us uncomfortable. ZachO once said in the podcast that “you never want Poison Rogue to become a pillar of the format”. This was when the deck was a very fringe Tier 3/4 performer that no one was really concerned with. Some players called it Weapon Rogue. For us, ‘Poison’ was always the more apt name to describe it.

And now, it has reached its final form, by utilizing an imbalanced package of cards that wasn’t meant to be utilized this way. Running Gnolls and Maestra without a single actual “thief” card in the deck, and it being this powerful, just feels very wrong.

We don’t think that the balance changes related to Standard are particularly difficult to execute. Nerf Gnoll. Nerf Cloak. Nerf Shadowcrafter Scabbs. Nerf Mozaki Mage, because it’s another binary deck that refuses to play the actual game and could become the “next problem”.

Sort this out and you’ll have that promising, diverse pack of decks we saw emerge a couple of weeks ago potentially come back from the dead.

How did everything go wrong so quickly? Can best be summed up by a video made by Domjat, one of our Gold subscribers (Warning to headphone users: this can get a bit loud).