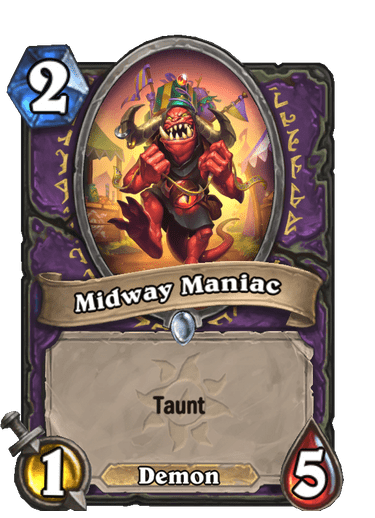 This card is quite boring but could be playable. Essentially a 2 mana Voidwalker that seems to be added for Demon-focused synergies. Pretty much dependent on the success of that kind of strategy. 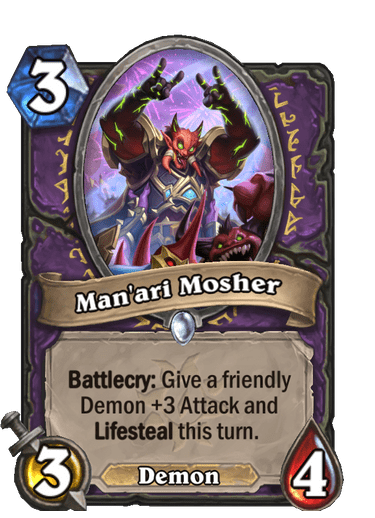 Decent card, like a beefy Abusive Sergeant. The lifesteal can be nice for racing situations in aggressive mirrors, but we don’t think Mosher will be a card that slower strategies will use for sustain. Goes in the same deck that Maniac gets played in. 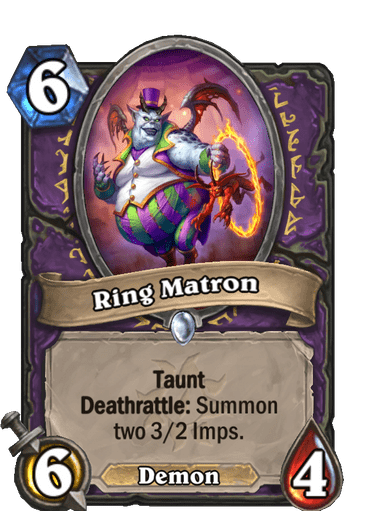 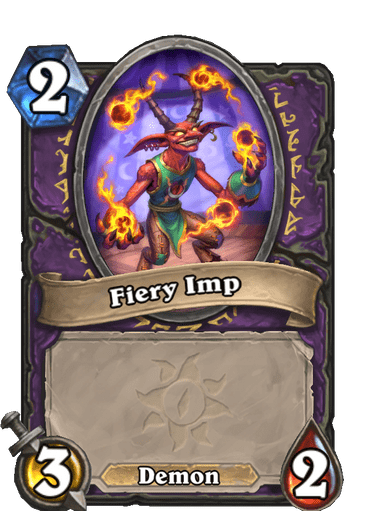 This girl has a big booty. Reminds us of Savannah Highmane, but potentially even more aggressive and harder to ignore. If we pull it on turn 3 with Free admission, we can play it on turn 4, which is something to keep in mind. Also works well with Man’ari Mosher for a big life swing. Promotes a midrange Demon Zoo deck where it likely tops the curve. 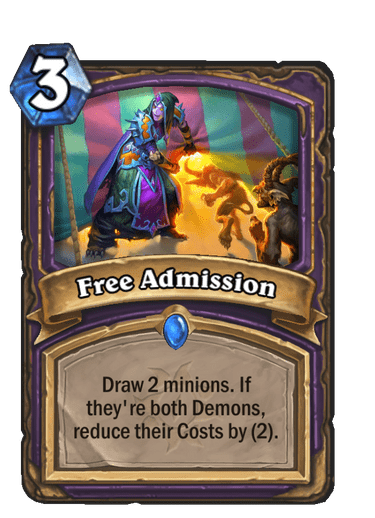 This is an Arcane Intellect at its very worst, but one that can turn into a mini Skull of Gul’dan if we’re running a heavy Demon deck. Would we ever run a pure demon deck in Warlock? That’s a bit difficult to say, as it might end up being a mediocre and one-dimensional midrange deck. It sure helps having Free Admission though. We can see other archetypes utilizing this card, but an Arcane Intellect in the life tapping class is not the same as an Arcane Intellect in Mage. 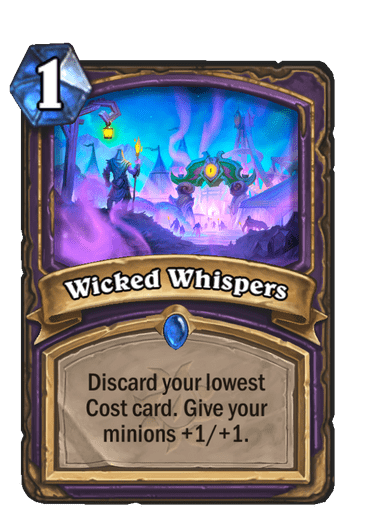 This should be a powerful card in Zoo, and we think it might even trigger a return to running a Galakrond package in this archetype due to the potential token value. Mark of the Lotus was an extremely powerful card, and this comes with a small drawback. If Zoo Warlock sees play, this card likely sees play. Particularly good with Bonewebb Egg. 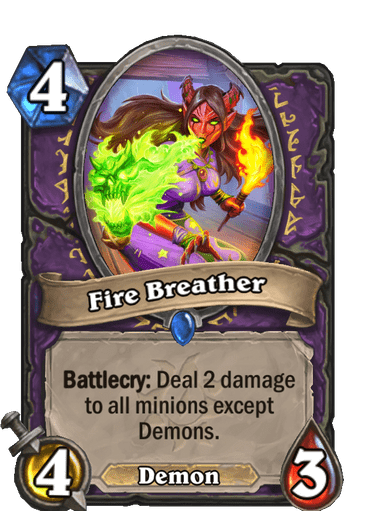 Demonwrath was a playable constructed card, and even continued to see play in Wild for many years. Fire Breather is Demonwrath on a stick, and that 4/3 stick costs only one additional mana. With Zoo Warlock receiving heavy demon support, we can see Fire Breather performing well as a strong tempo swing card that particularly shines in aggressive mirrors. Slower decks are more likely to still opt for Crazed Netherwing, which is the more powerful board clear that’s available. It allows Warlock to potentially give up the dragon package and run an alternative AOE effect, but we’re not sure it will ever want to do that. We see Fire Breather as mostly a Demon Zoo card. 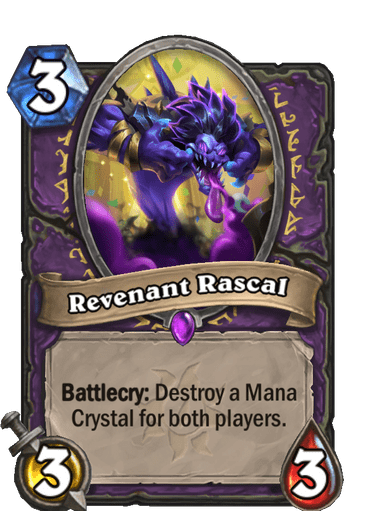 This card reminds us of Cult Neophyte, a tool with which an aggressive deck disrupts the opponent’s turn. Rascal is a more drastic approach, which can stall the game quite significantly and prevent an opponent from reaching a certain power spike. Very niche but may eventually find use. 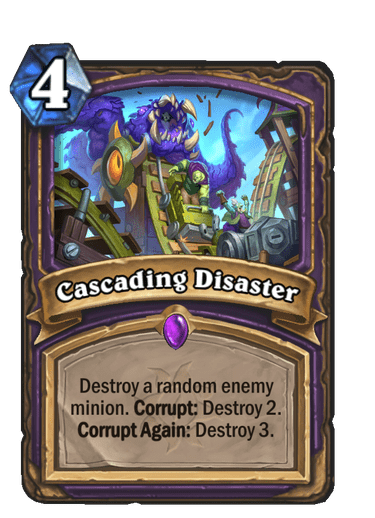 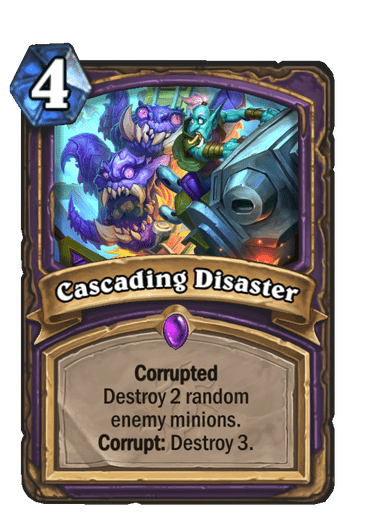 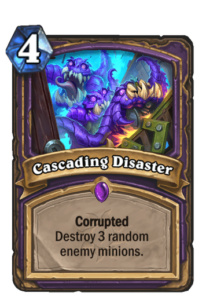 A 4 mana Deadly Shot is bad, but Cascading Disaster scales well into a devastating final form. The problem is that it’s very slow and unlikely to be effective against aggressive decks. Since Warlock doesn’t have great single target removal, it may find use for this card. But, if Warlock decides to run a Galakrond shell for its late-game strategies, Plague of Flames is just far better. Perhaps, we run both? This does go in a Y’Shaarj/Tickatus deck. 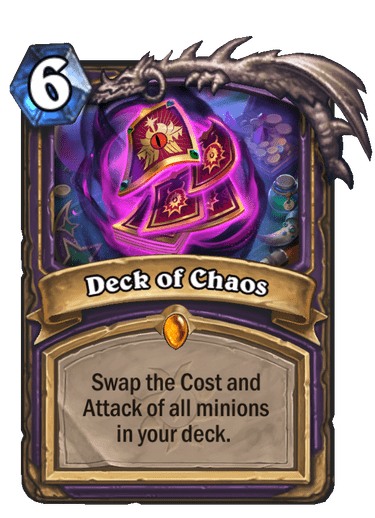 This should be treated as a weaker version of Luna’s Pocket Galaxy. There have been many talks of fantastic combos that are possible with this card, but we think none of them are realistic options to build a deck around if they rely on us playing Deck of Chaos every game. What needs to happen for Deck of Chaos to see play is the emergence of a functional Control Warlock archetype that can win games without drawing Deck of Chaos but happens to do very well when it does. A win condition such as Malygos is a good example. Running Summoning Portal might be more of a reach. 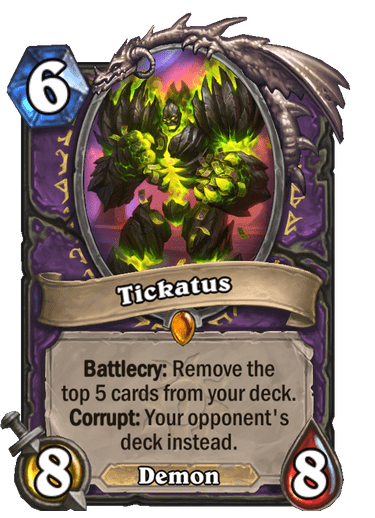 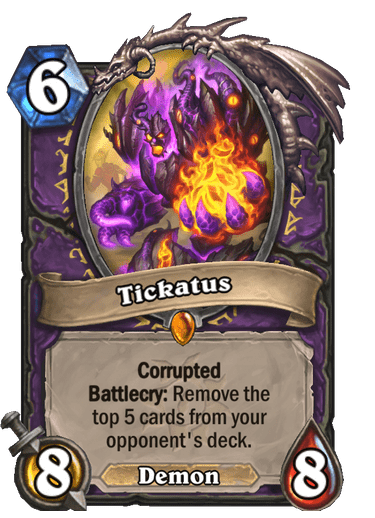 This is an exciting card that makes you speculate over a potential fatigue win condition in late-game Warlock strategies. The fantasy is to upgrade Tickatus and replay it with Y’Shaarj to delete a total of 10 cards from the opponent’s deck while developing tons of stats, which should spark some nostalgia from the days of Rin, the First Disciple. A deletion of 10 cards should very well cause the opponent to reach fatigue and give the Warlock an advantage in late-game matchups, especially when facing combo decks that require the assembling of resources.

Against faster decks, we just drop a 6 mana 8/8 to the board. It isn’t great, but it isn’t completely terrible either. We think the floor for this card is good enough to see play.

While there is some promise in its Darkmoon Faire set, we think Warlock needed a better set than this one to significantly climb in power. There isn’t a Warlock card that really makes us gasp in excitement, and many of the solid cards in the set lead to big deck building headaches.

Zoo Warlock seems to have received a lot of support, but we’re not sure about the demon-focused direction it seems headed to. We could envision the archetype going into a pure demon direction to fully take advantage of Free Admission, but the payoff isn’t all that amazing for what we are likely to give up.

Wicked Whispers might end up being the most important card for Zoo, and the one that’s most likely to elevate it back to competitive play. It allows Warlock to leverage a board lead efficiently, and it’s all about whether Warlock can now consistently gain that lead.

The two legendaries provide alternative ways for Warlock to potentially win late-game matchups. Deck of Chaos is a weird card and there has been a lot of discussion on how good it can be. But even if the card is good, it doesn’t solve the survivability issues of whichever deck ends up running it. Current slow Warlock decks, apart from Galakrond Warlock (which probably can’t utilize Deck of Chaos very effectively), have very poor survivability and there’s nothing in this set that significantly alleviates that.

This brings us to Galakrond Warlock, which we think has the best shot at making a comeback due to its strong removal tools. We can envision it successfully utilizing an Old God to boost its late-game finishing power. Tickatus could push Warlock into utilizing Y’Shaarj alongside Cascading Disaster, which seems like a promising combination. If you want to play Y’Shaarj, Warlock could be your best bet.

Gul’dan looks down, but not out. This expansion, like many others, could produce some surprises.