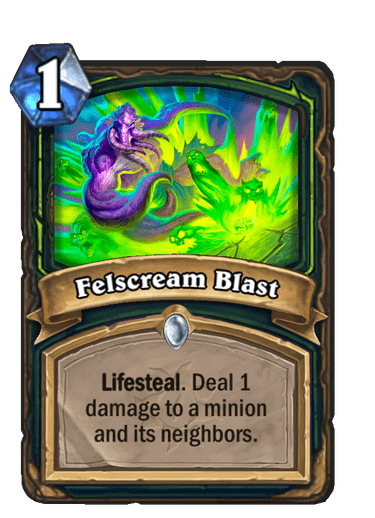 Shooting Star was a playable Mage spell, and Felscream Blast has lifesteal on top of the same effect, so this card looks strong on the surface. The question is whether there’s a Demon Hunter deck that would be specifically interested in it, and we’re drawing a blank. Soul Demon Hunter already runs much stronger AOE effects, and while the deck may not mind generating this card off Wandmaker, including it in the deck when it doesn’t provide draw or reliable damage is a stretch. 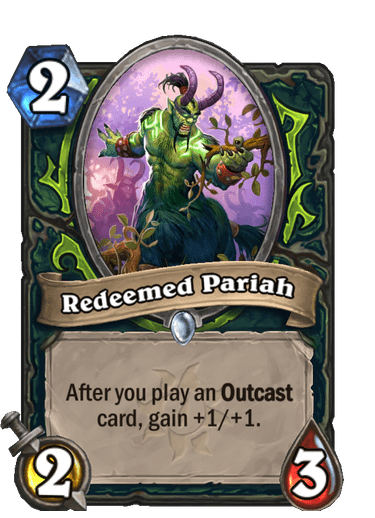 A snowballing threat for Aggro Demon Hunter sounds pretty good in theory, but Pariah requires a lot of support to be a consistently threatening card, and the cards that support it are not all great fits for the deck. It’s possible that Aggro DH will make some adjustments to accommodate it into being a stronger threat, so we think it has potential to see play. 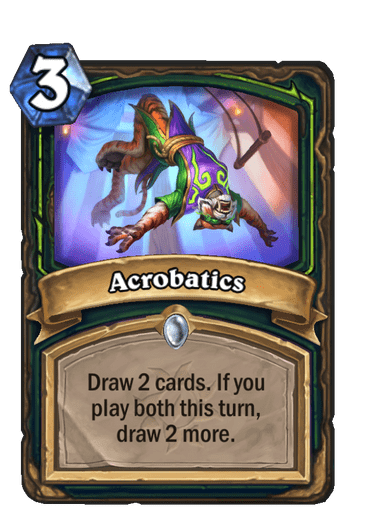 This is at worst, an Arcane Intellect, which is already a playable constructed card. If you’re running a deck with a very low curve, it can potentially draw you 4 cards, which is insane. The problem is that Acrobatics will rarely activate, even in a low curve build, on turn 6. You’re looking at turn 7-8 to fully make use of its ability consistently (unless you fully build around it, and have your entire curve concentrated at 1-2 mana), so its theoretical ceiling doesn’t exist through most of the game for an aggressive deck.

Demon Hunter, unlike Mage, is already blessed with extremely powerful forms of card draw, so while Acrobatics has a chance of seeing play, it’s unlikely to be an outstanding performer. 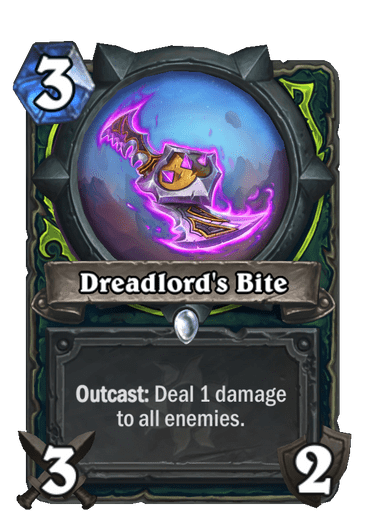 This is a potentially new weapon for Aggro Demon Hunter. It is likely a better fit than Marrowslicer due to its cheaper cost (Soul Fragments are also often a hindrance due to Skull). In outcast form, it deals up to 7 damage to face (only -1 damage compared to Marrowslicer for -1 mana) with the first swing acting as a Swipe. It also buffs and protects an on-curve Pariah. Players might be sleeping on this one. 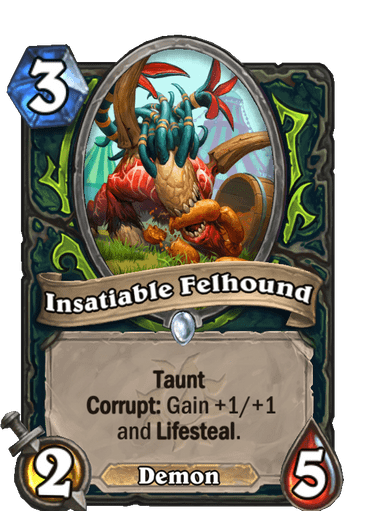 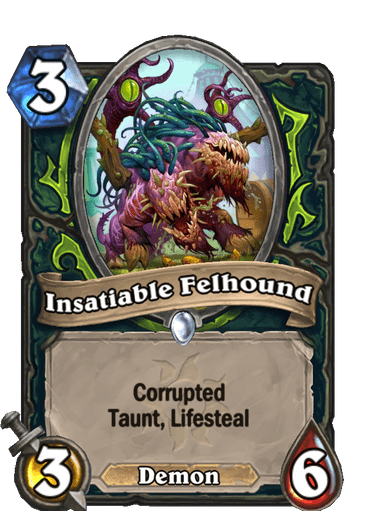 A 3/6 taunt with lifesteal sounds sweet in theory, but this can only come down on turn 5, and its uncorrupted form is very weak. If the class already doesn’t play Ashtongue Battlelord, a very similar card that isn’t conditional and can be dropped a turn earlier, what makes us think that this card would have a different fate? 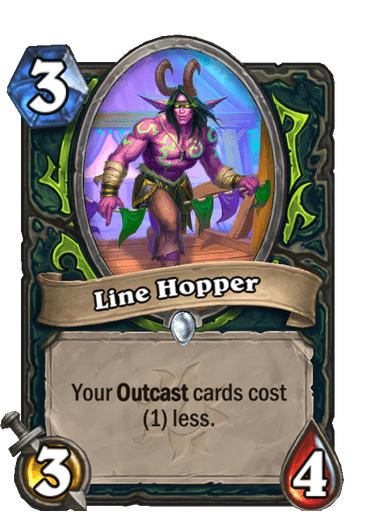 This is an early game mana cheater that works well with Pariah. The fact it doesn’t pay a penalty for its ability (being a 3 mana 3/4) already gives it some chance to see play. It makes Aggro Demon Hunter take a second look at cards it doesn’t consider now, such as Crimson Sigil Runner, Consume Magic, and Spectral Sight. More importantly, it’s a threat that must be removed on the turn it’s played. If it saved you 1 mana, that’s already quite good. 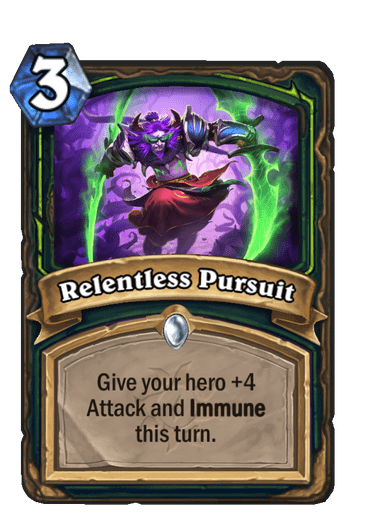 Pursuit offers a source of damage that incentivizes trading into minions thanks to the immune effect, but Soul Demon Hunter might consider this to be good enough as another attack modifier that enables Blade Dance and Bladed Lady, while also working well with Aldrachi Warblades. Soul Demon Hunter usually funnels its portrait damage to face, while utilizing AOE effects to deal with the opponent’s minions, but there are some emergencies when we just have to punch a big minion and Relentless Pursuit allows us to dodge the incoming damage that results from it. When attack buffs are so core to a deck’s strategy, the more we have of them, the stronger each individual modifier is. 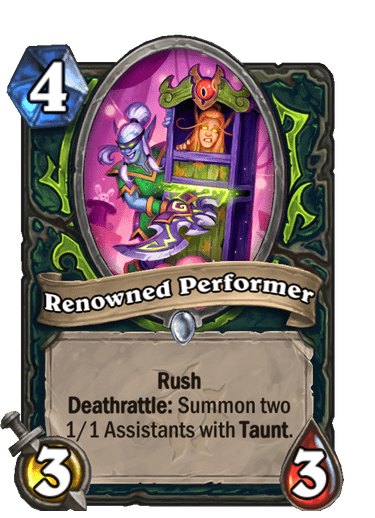 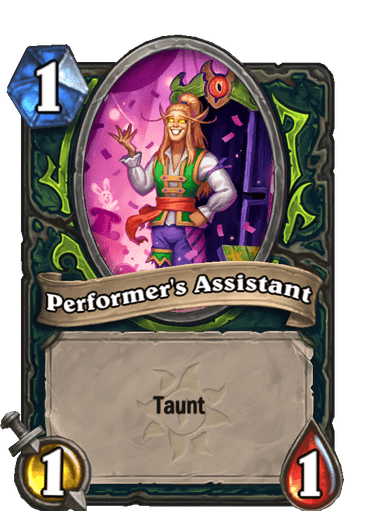 This looks like a decent defensive card. The initial rush body provides us with removal, while the token taunts allow us to stall and stabilize. The problem is that Demon Hunter decks usually pass on purely defensive cards. Renowned Performer’s best shot at seeing play might be a viable Token Demon Hunter deck. Good luck with that. 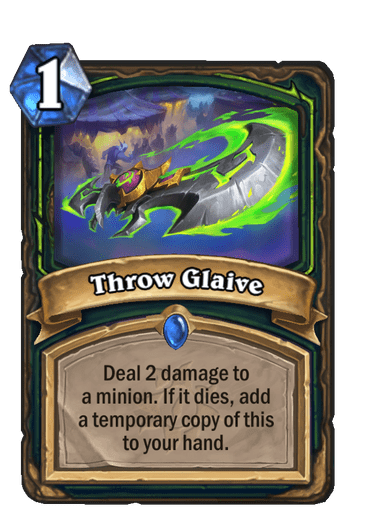 Another card that might have been considered in another class, but in the world of Demon Hunters, it’s just not good enough. First, it doesn’t go face and Demon Hunter really doesn’t want to be stuck with cards that don’t deal damage. More importantly, the AOE effects available to the class are so good that Throw Glaive looks watered down in comparison. It’s just too reasonable and fair for Illidan. 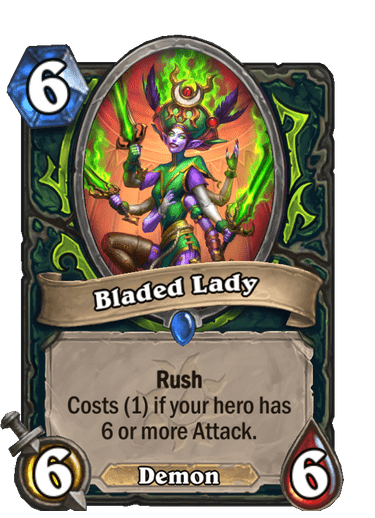 This card might prove to be an incredible addition for Soul Demon Hunter. Soul Demon Hunter’s main weakness is dealing with medium-sized or big minions, and it often loses games when it can’t get through a sizeable taunt. Bladed Lady changes all of that by ramming through a blockade and allowing you to smack your opponent in the head more consistently. It’s quite easy to activate since we run multiple weapons and attack buffs (such as Lapidary).

Much like Blade Dance, this is a card that helps you funnel your damage more efficiently by taking care of things on the board, so we’re very confident that Bladed Lady will be included in the deck as a single target removal tool that’s far more threatening than currently available options (Consume Magic). This is Soul Demon Hunter’s Bloodboil Brute. 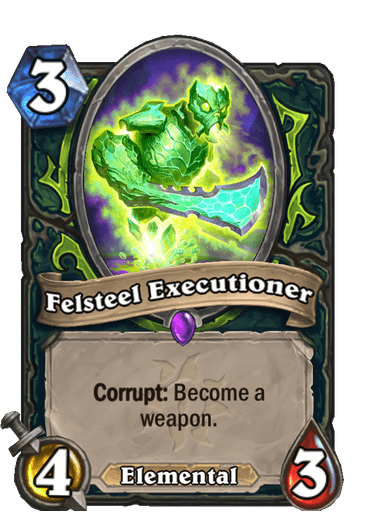 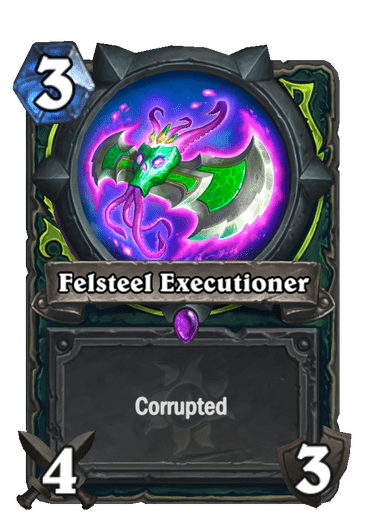 Really cool design and flavor. The minion form is atrocious, while the weapon form is worth so much damage. We generally try and look for corrupt cards that have a decent baseline form, and this isn’t one of them: this card is dead until turn 5 at the earliest. Furthermore, the weapon lends itself to be a very aggressive card, but the corrupt mechanic isn’t a great fit for Aggro Demon Hunter. It requires us to have a robust 4-mana slot that can activate Executioner consistently, and we can’t run Marrowslicer. Is this weapon good enough to push Illidari Felblade and Vilefiend Trainer into the deck? It’s an interesting question, but we generally think Aggro Demon Hunter will have to choose between Felsteel Executioner and Dreadlord’s Bite as its weapon of choice. 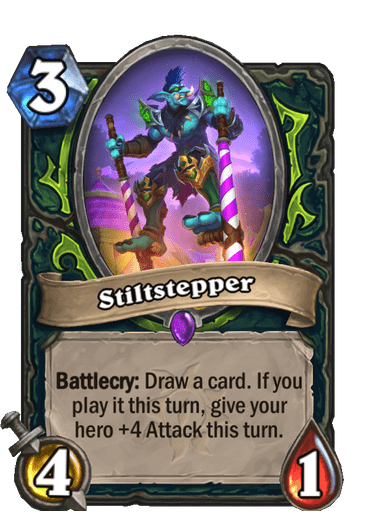 When activated, this card seems good. Even if we budget the body at 1 mana, we can immediately compare Stiltstepper to Chaos Strike and reach the conclusion that drawing a card while dealing 4 damage is a good deal.

The problem is that activating the card is tricky and can’t be done in the early game since we must immediately play the card that we’ve drawn. This means it mostly fits a very aggressive deck with a low curve, with a high percentage of cards that cost 1-2 mana and allow us to comfortably play this on turn 5 and yield good results.

So, we need to build this aggressive deck in a specific way, and yet Stiltstepper is not likely to perform very well before turn 5. There are better fish in the sea of Demon Hunter cards. 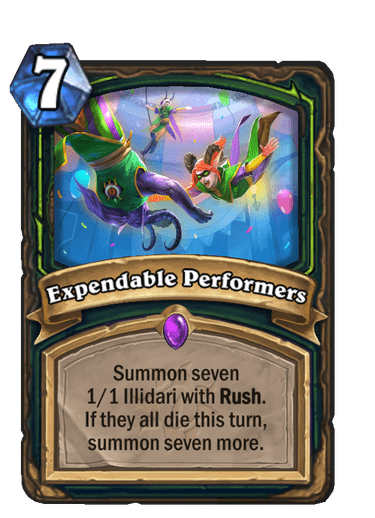 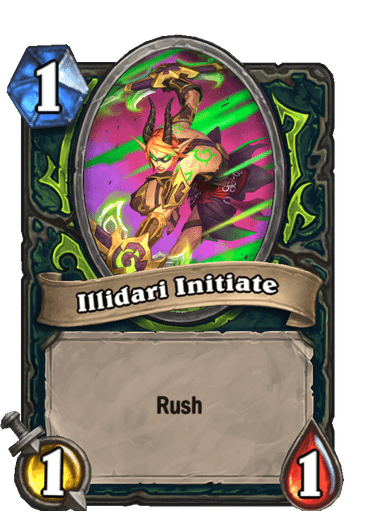 The good news is that this card activates for a second round of tokens if the first round of tokens all died, regardless of how many we initially summoned, so it’s not limited by board space.

On the surface, this is a nice removal tool for a Token Demon Hunter deck. We have the potential to remove as much as 14 health from the opponent’s board, and whatever tokens we didn’t rush into something stay on the board, providing us with a board development swing.

The problem is that we’re discussing a hypothetical Token Demon Hunter deck, and one that likely doesn’t run Skull of Gul’dan due to how expensive this spell is. At this stage, we’re just giving any Token DH card a 1 by pure reflex. 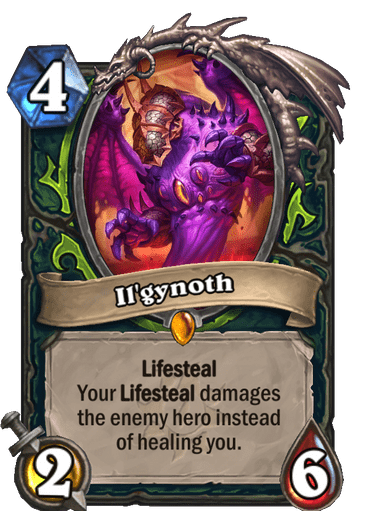 This legendary has a lot of potential, but the most striking upside of the card is its synergy with Aldrachi Warblades. It can turn Warblades into an offensive weapon in matchups against defensive decks where lifesteal isn’t as useful. We essentially give our Warblades windfury, which makes any attack buffs double their damage on top of it.

But even if we don’t utilize Il’gynoth as a late game finisher, it’s a very strong standalone card. A 6 health 4-drop is hard to kill, and trading into it becomes incredibly awkward. It can deal a sizeable amount of damage to the opponent’s face by itself, since every time Il’gynoth hits face, it deals 4 damage. So, it’s a big threat on-curve for Soul Demon Hunter, while enabling potentially broken late game damage combos. We don’t see us passing on this one. 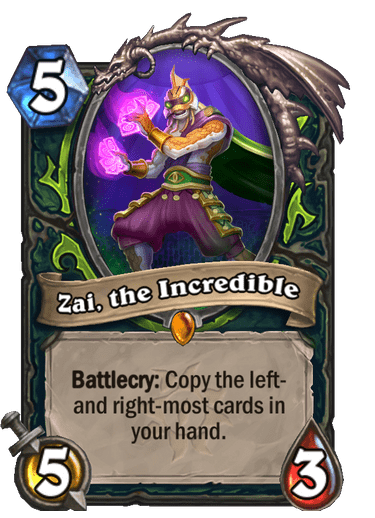 This card reminds us of Elise the Enlightened. The effect isn’t as powerful but has no deckbuilding restriction and can be played at any point in the game. While we can see Zai being used in Soul Demon Hunter just to copy damage effects, it does clash with Skull of Gul’dan and might end up being too slow for the deck. A 5 mana 5/3 is bad.

Zai is more exciting when we look at the prospect of copying an extremely powerful late game finisher, much like Elise did in combination with Chef Nomi back in Saviors of Uldum. If a defensive Demon Hunter deck that is centered on an Old God emerges, for example, Zai will likely become a cornerstone card in that archetype. We think that Zai’s presence makes such late-game Demon Hunter strategies more likely to see play, but we’re not enamored by its utility in the currently established, faster Demon Hunter decks.

Since Demon Hunter receives 15 class cards in every set, it tends to get a lot of garbage that usually focuses on the Token Demon Hunter archetype. This deck has been repeatedly pushed without success, mostly because it’s a token deck that doesn’t have any board-wide buffs (an intended philosophy by Team 5). When your 1/1’s don’t threaten the opponent and get ignored, what are you even doing?

Fortunately for Illidan, he received some significant upgrades where it matters. Soul Demon Hunter is already one of the best decks in the game, with a flexible and effective game plan that’s hard to consistently beat. Its main weakness is dealing with medium-sized or big threats that block its way to the opponent’s face. It also deals a lot of damage, but rarely bursts down the opponent from 15 health, which leaves some counterplay in the form of healing and armor gain.

In comes Bladed Lady. She is an unbelievable fit that perfectly answers some of the mid-game boards that Demon Hunter can struggle with. In comes Il’gynoth. He is not just an incredible standalone 4-drop that’s strong on-curve. He also provides you with the late-game opportunity to deal 16-18 damage in one turn with two or three cards.

It’s hard for us to see Soul Demon Hunter gaining these tools and failing to make an impact during Darkmoon Faire. In case this deck doesn’t dominate, there will be open space for Aggro Demon Hunter to potentially make its return. Aggro DH has received quite a few playable cards to toy with, and we can see the archetype experimenting in a couple of different directions (Outcast focused with Line Hopper/Pariah, or the established Reader build with an even lower curve and Acrobatics).

We know all about the Madness at the Darkmoon Faire, but you know what else you’re going to find there?