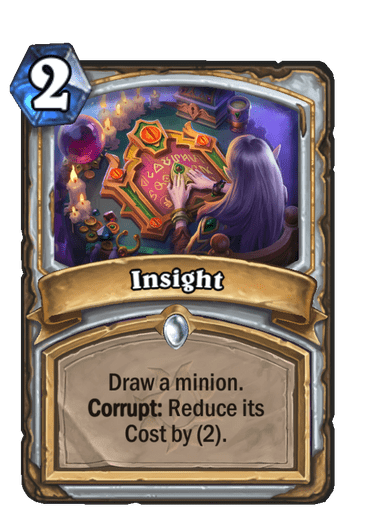 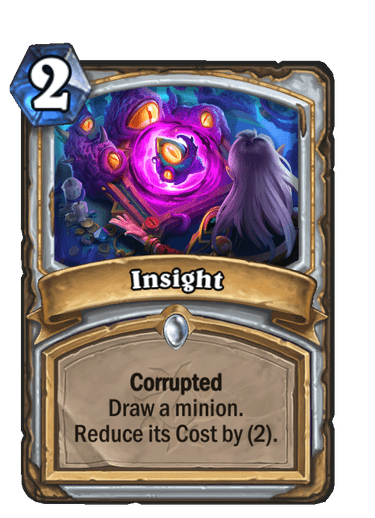 A 2-mana card is so much easier to corrupt, and Corrupted Insight tutors us a minion while also discounting it. This is a very powerful effect for different kinds of strategies. Whether we run a Tempo, Control or a Resurrect shell, Priest tends to run a spell heavy deck with a few key minions, so Insight could be an extremely impactful addition to the class in general. 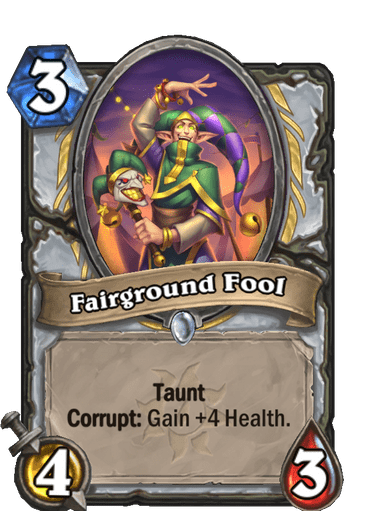 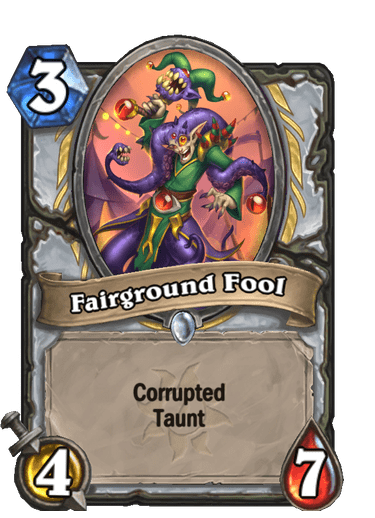 We see this as a Resurrect Priest card, and as such, it’s less critical that we play Fool on curve since the archetype is comfortable playing passively in the early game. Fool mostly serves as a beefy boy you can drop in the mid-game to soak up damage, and it’s quite nice to resurrect too. Serviceable. 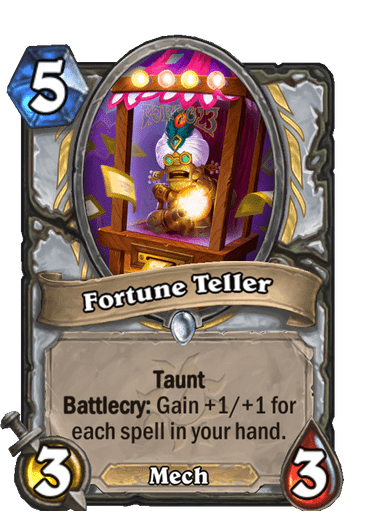 This card initially looks like a low hanging fruit for current Control Priest, since it runs many spells and can easily jack Fortune Teller up to be a sizeable taunt. But would Control Priest want to run this type of card? The archetype is more about removal, board swings, and value generation and less about playing big dumb idiots on curve. We’re not sure it’s a good fit in a deck that’s already stacked with synergies. 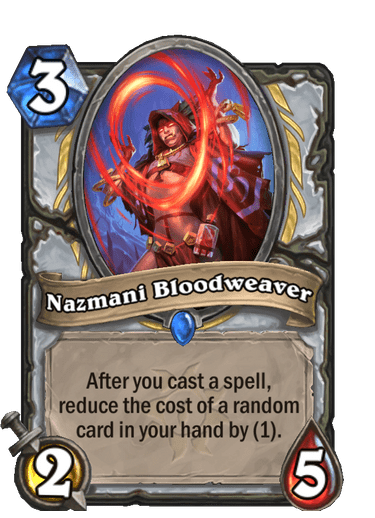 This card has unreal potential in Priest decks, as it should thrive in similar shells in which Sethekk Veilweaver currently thrives. While you could argue that both cards compete for the same resources, they also synergize incredibly well together. With a horde of 1-mana spells and Palm Reading, Bloodweaver can enable some miracle-esque plays and set up utter blowout turns. One of the most dangerous mana cheating cards in this set and one to watch out for. 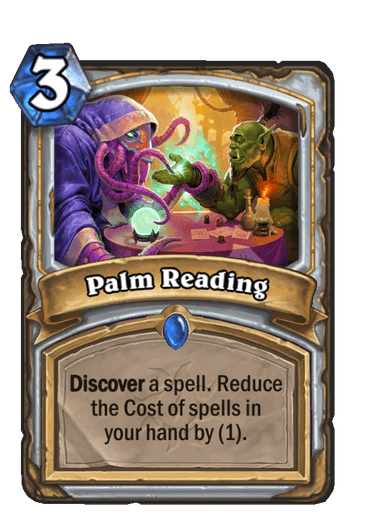 This card is just completely absurd, and we struggle to envision a Priest deck that looks at this card and doesn’t want to run it. You must remember that Palm Reading also discounts the spell you’ve discovered, so it’s stupidly easy to create huge net gains of mana cheating through Palm Reading with the average Priest hand. In Control and Combo shells, it can create hands filled with 0 mana spells setting up ridiculous combos. In Resurrect shells, it’s paramount in allowing you to cheat out your big plays earlier. It makes your opponents wildly uncomfortable trying to predict your next response. Monumental. Priest may have the best deals after the launch of Darkmoon Faire. 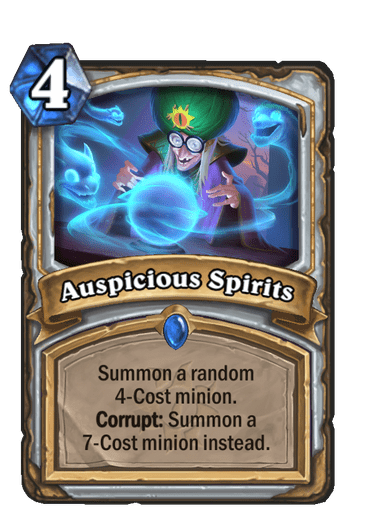 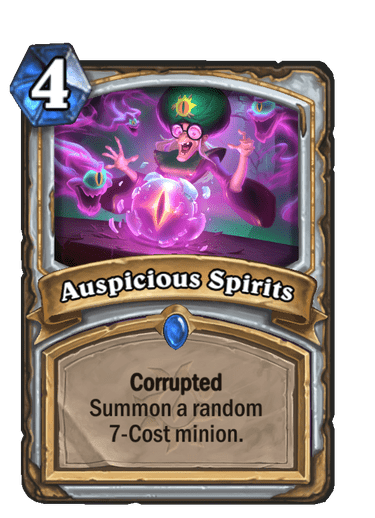 Priest is just not about vomiting stats to the board, and we can’t see how a random 7-drop on turn 6 at the earliest achieves anything for the class. This card’s uncorrupted form is just horrible too. Nice to generate off Veilweaver but that’s about it. 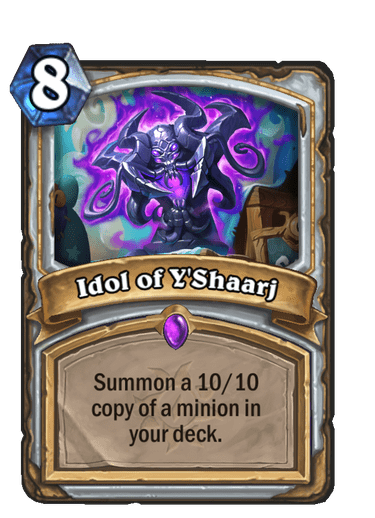 The new Shadow Essence, and this is a much fatter Shadow Essence. At 2 extra cost, we get double the stats of Essence! Now, this is obviously not twice as good since Priest’s resurrect effects aren’t as powerful and fast as they used to be, but Idol of Y’Shaarj can be discounted easily, which means there is some potential for scamming. This card will go as far as its specific archetype does. 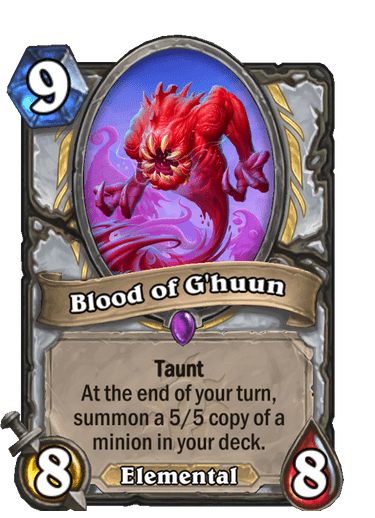 This is the premier late-game Resurrect Priest card, with the capability to snowball games out of control with its static ability. Very nice to get off Idol, and pretty game-winning with Mass Resurrection. Insight allows us to play this big boy earlier too. We’re giving this card a modest score, since Resurrect Priest tends to be a very polarizing deck. Its success is largely dependent on what else is successful, and that’s the definition of potential rather than a sure thing. 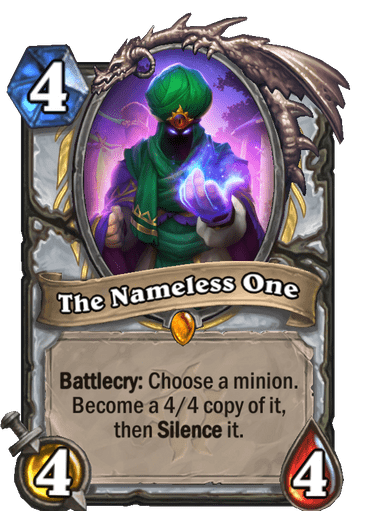 Trust Blizzard to give Priest a legendary that is a pure tech card. Yes, our hot take is that this card is being massively overrated! Spellbreaker had a baby with Faceless Manipulator. The Nameless One doesn’t really serve a clear purpose or further any game plan your deck may possess. It’s mostly there to annoy and frustrate your opponents, which fits the class’ identity! It will see some play, depending on what’s out there to target. 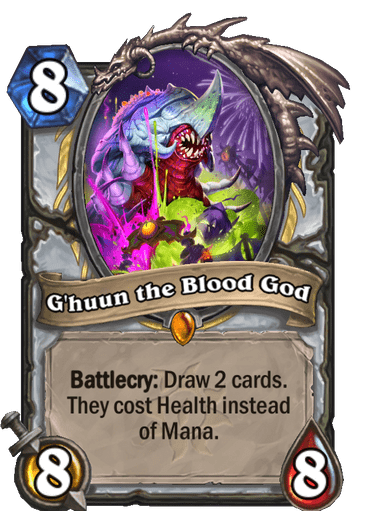 How about some more mana cheating? We’re not sure we need to explain why G’huun is an extremely powerful card. Perhaps we could look back at that certain tavern brawl where cards cost health instead of mana: it tends to break the game. G’huun is basically a non-conditional Togwaggle with a built-in Wonderous Wand, which is the ultimate late game card. It’s potentially scary good with Polkelt too. The fattest 4.

We can already hear the audible sighs as readers of this page register that Priest has received the strongest set in the expansion and is very likely to become one of the strongest classes in the format. The light shall burn you at the Darkmoon Faire.

To understand why that is, we refer to a simple concept in Hearthstone – a deck that can do the most things for the least amount of mana is likely to be powerful. The mana cheating mechanics that Priest has received in this set are absurd.

It begins with Palm Reading, which is basically an Emperor Thaurissan for spells that costs 3 mana, and you can run two copies of. We’re not sure there’s a Priest deck that wouldn’t want it. We follow with Nazmani Bloodweaver, which can cheat mana at the level of Sorcerer’s Apprentice. Then we have Insight, just to make sure we can cheat mana before we get to the bigger mana cheating turn. It goes on with G’huun, Priest’s very own Togwaggle.

This set allows Priest decks to just blow opponents out of the water by outpacing them through their usage of resources, and Priest is already an extremely powerful class when it comes to its management of resources. Control Priest will become faster and more efficient, and a similar shell could even support a more combo-centric strategy aiming at a specific late-game win condition rather than just making you want to concede. The possibilities are endless when you don’t spend mana on cards!

And then, to add insult to injury, we might have Resurrect Priest coming back with Idol of Y’Shaarj and Blood of G’huun. It’s sure to be entertaining.

Get your squelch buttons ready.