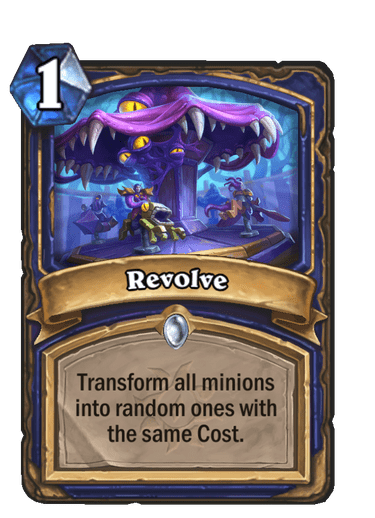 Revolve is a hybrid of Evolve and Devolve. While some may treat this as a weakness, it makes the card extremely versatile and rarely dead in your hand. In addition, it brings back a slightly weaker but still threatening Desert Hate combo. We realize Shaman is a weak class now but Revolve will probably be remembered as one of the stronger Shaman cards down the road. 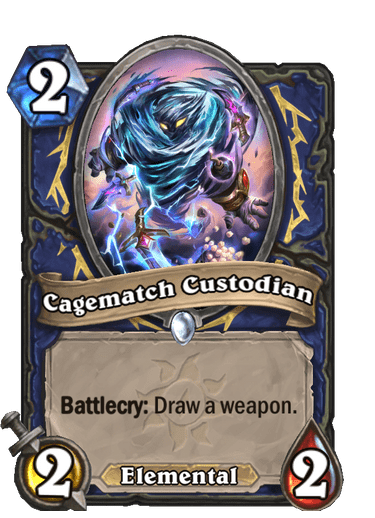 This could be the most impactful Shaman card of this expansion, simply because it adds consistency to several Shaman strategies that currently exist and rely on a weapon. Rune Dagger is extremely important for Spell Damage Shaman, Splitting Axe is very powerful in Totem Shaman, Doomhammer is a big finisher for Aggro Shaman, and Boggspine Knuckles is critical to Evolve Shaman’s game plan. Increasing the consistency in which these weapons are drawn should significantly increase these decks’ win rates.

Cagematch Custodian is just a big Shaman buff across the board. 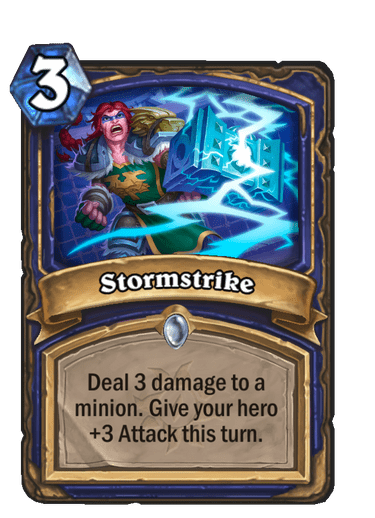 Just a strong, well-rounded card. For 3 mana, we can deal up 6 damage to a minion, which can result in a significant tempo gain during the mid-game. We can clear a small minion while killing another. We can clear a small minion and just go face. Stormstrike’s damage is never wasted. Very efficient card that we can see multiple Shaman decks playing. 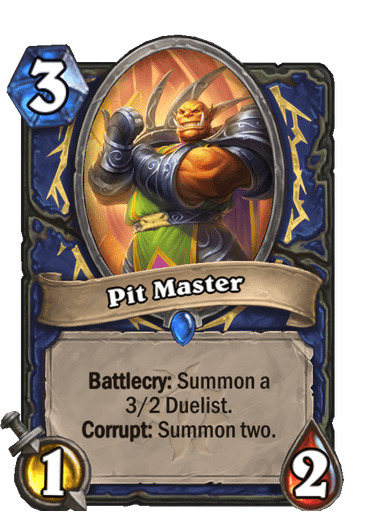 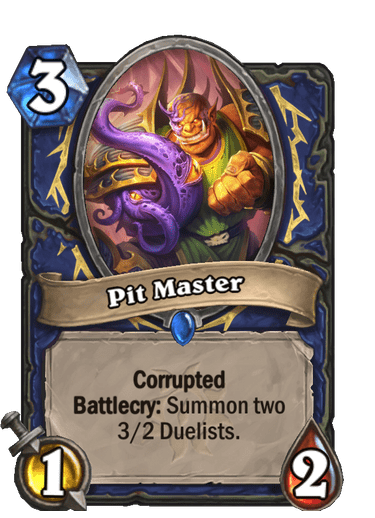 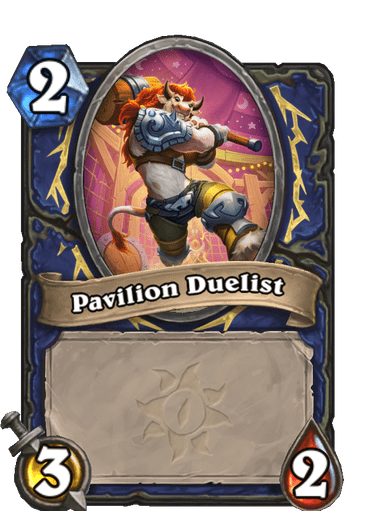 We’re not sure this card is even good enough for Quest Shaman or Evolve Shaman, and since Pit Master is mostly intended to be run in these decks, that’s a bad sign. It’s very weak on turn 3, and its turn 5 payoff is hardly game-changing. 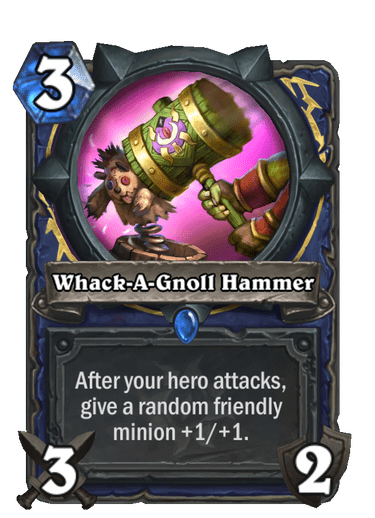 Unfortunately, the new 3-mana weapon that was designed to be an immediate follow-up to a custodian is somewhat disappointing. The effect is so lackluster and dependent on having board to be somewhat useful, while promoting no notable synergies. There are far more important weapons that Shaman can draw with Custodian. This is as bland as it gets, but considering the carry potential of Custodian, it might be playable enough. 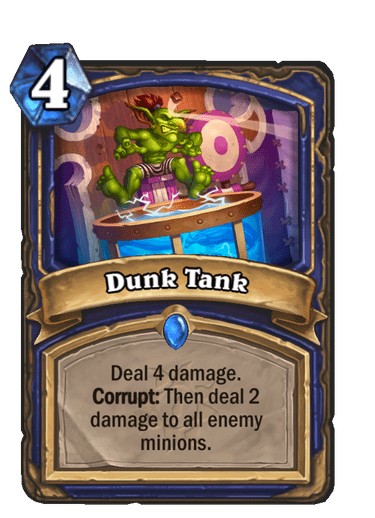 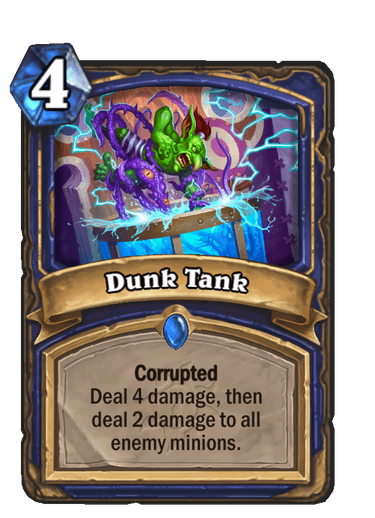 What makes Dunk Tank different from other corrupt mechanic cards is that it is a reactive removal tool, so it’s far less punishing to keep in your hand and wait for the right moment to play it. The uncorrupted form is weak, yet serviceable enough to deal with most 3-drops in an emergency. The corrupted form is very powerful, looking like a Swipe on steroids. Control Shaman decks probably find room for this card, and they have plenty of ways to upgrade it. But it might sneak into an Aggro Shaman deck with Doomhammer too because going face while nuking the board after equipping that weapon sounds pretty sweet to us. 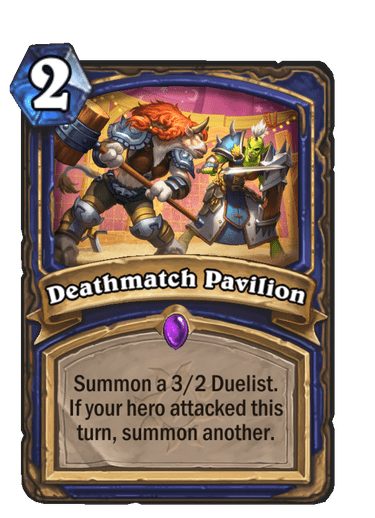 This card is okay, but probably not good enough. On turn 2, it is weak. Once a weapon is equipped, it offers a modest payoff. If a 1-mana weapon were available to Shaman, we would give this a higher score, but in the current circumstances, it’s just underwhelming. 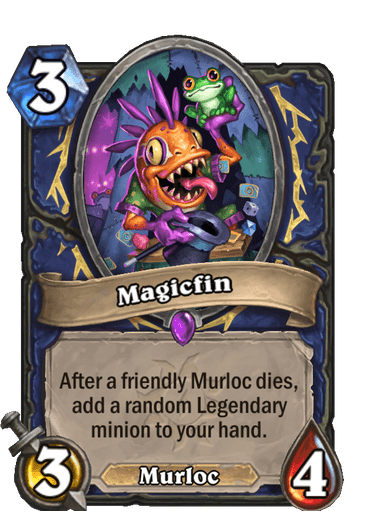 This card is bizarre. We’re not sure why Murloc Shaman is suddenly getting support, and we’re not sure why this is the kind of support that can lift it from the grave. You’re telling us we need to stick murlocs to the board (which is already hard enough), trade them in and get a bunch of expensive legendary garbage that aggressive decks are very bad at utilizing? 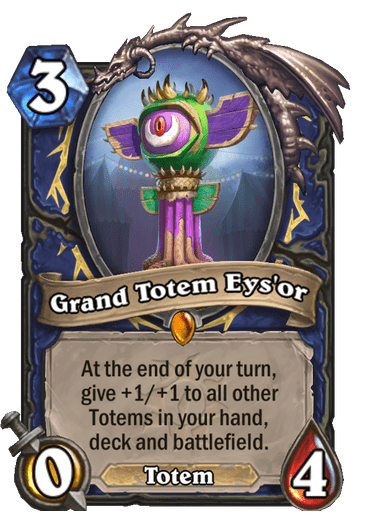 This card is strong but could have been a non-legendary minion and the world wouldn’t have ended. It’s a direct buff to Totem Shaman, providing another early game snowballing threat. It doesn’t solve the archetype’s issue of being utterly useless once it falls behind, so we don’t think it will make a big enough impact on its performance. Very good with Totemic Reflection and Splitting Axe obviously, but since this is a legendary, that explosive opening isn’t going to be super common. 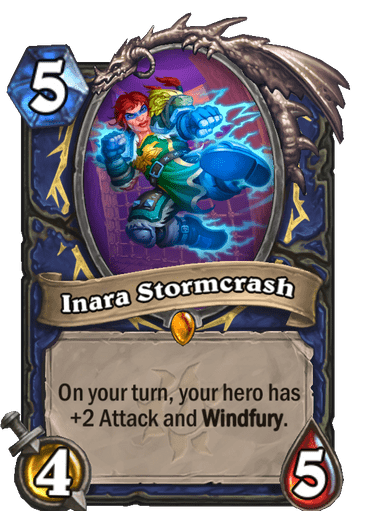 It’s easy to understand why this card is good when you draw a comparison with Glaivebound Adept. Inara Stormcrash is a strong on-curve play that provides an immediate impact on the board, can deal damage, and is a threat that must be removed. She also essentially acts as a Doomhammer in minion form, enabling Rockbiter combos for burst damage. But Inara shouldn’t be a hugely impactful card that transforms an archetype, it’s just a nice upgrade for aggressive Shaman decks.

We think Shaman’s set is quite good, but the class currently faces an issue that may reduce the set’s effectiveness. Shaman is splintered into many different underpowered strategies, and our impression is that each of them got something. But that something may not be enough to fill their power gap compared to the rest of the field. So, while Shaman got some good cards, there’s still a risk that none of its struggling archetypes have sufficiently grown in strength.

One exception is Cagematch Custodian, which should be monumental for nearly any Shaman deck. It can be compared to Corsair Cache in its potential impact. That extra consistency in finding your deck-defining weapon could make a big difference.

Revolve is a huge card for Evolve Shaman, but is that enough alongside Custodian to lift the deck from its current plight?

Grand Totem Eys’or is nice, but it’s not enough to make Totem Shaman significantly stronger, while Magicfin is a complete waste of time for Murloc Shaman.

Aggro Shaman may have received the biggest boost in its power, but remains an erratic shell filled with burst damage but lacking quality minions.

Shaman has the survivability tools to get to that late game but has long lacked the finisher to close games.  Therefore, Quest and Control Shaman might be genuinely interested in an Old God or two (C’Thun, Y’Shaarj). The arrival of the Old Gods could well be the most important event in changing Shaman’s fate at the Darkmoon Faire.

Will Thrall come back from his vacation? Time will tell.