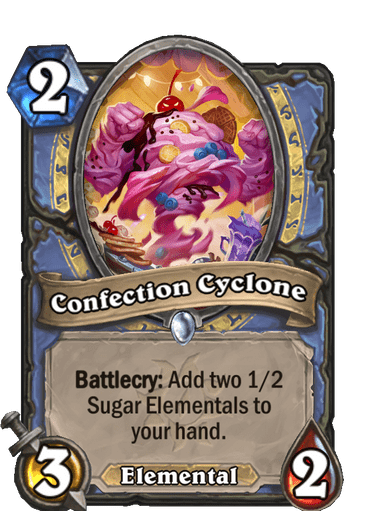 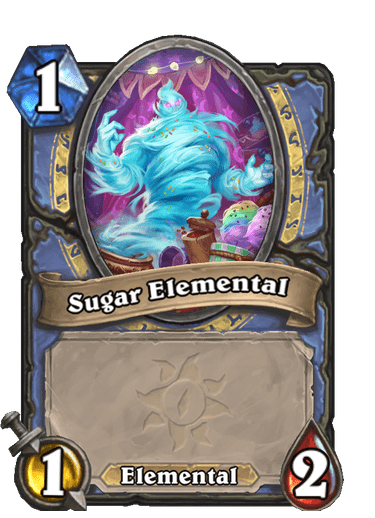 This is a fantastic 2-drop, in a similar vein to Fire Fly but possibly better in the context of Mage strategies. It can shift Cyclone Mage into a heavier elemental path by running Elemental Allies. It can enable the powerful finisher of Grand Finale. Most importantly, it single-handedly discounts Mana Giants by 2 while fighting for board. We just can’t see this card not seeing play. 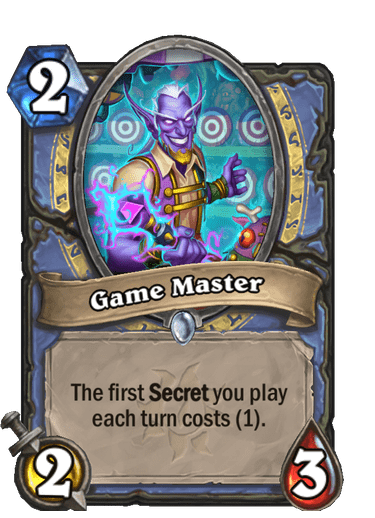 Game Master is essentially two more copies of Kirin Tor Mage for Secret Mage. We can play it on turn 3 alongside a secret, and while it has worse stats than the classic 3-drop, it’s a threat that can repeatedly discount secrets, so it’s a high priority for removal. Nothing game-breaking, but solid and needed for the archetype. 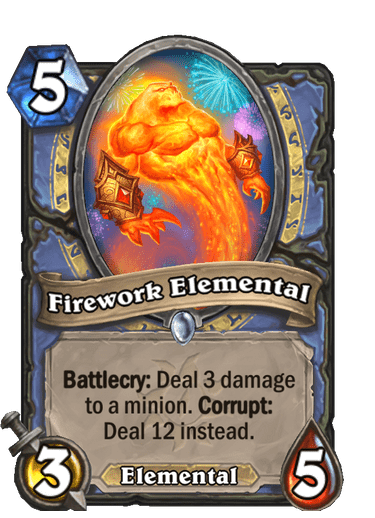 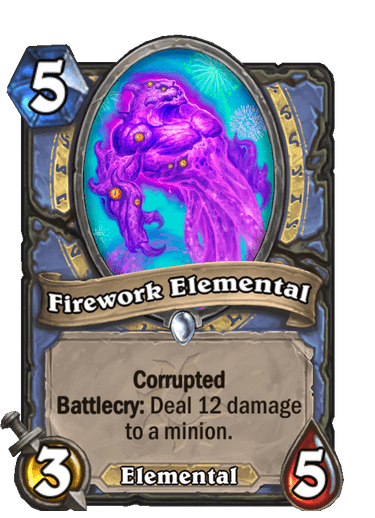 We’re not sure why we’d want to run this card when Mage has much better single-target removal available to it. Firework Elemental is so slow and weak that it probably doesn’t see play in a dedicated Elemental deck. It doesn’t even go face! It’s just a very sad Blackwing Corruptor and a puzzling print all-around. 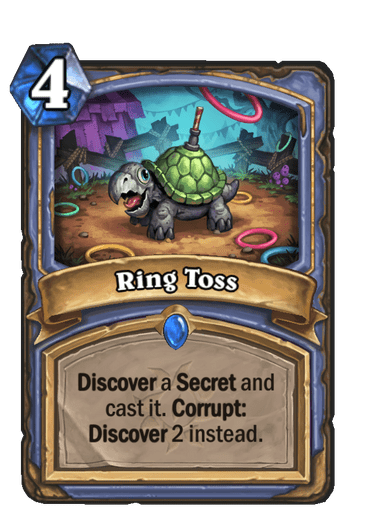 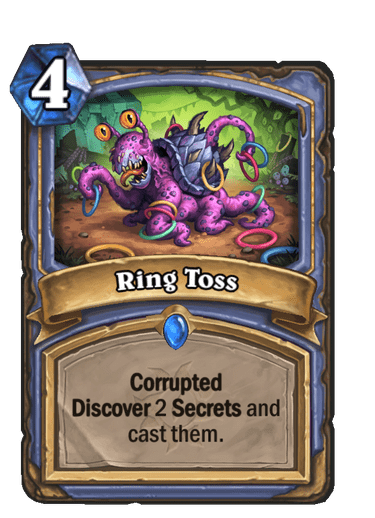 This card is painful. While we may want to play secrets in a new Secret Mage deck, Ring Toss isn’t the kind of card that fills us with confidence. In uncorrupted form, this card is awful, drawing a poor comparison to Arcane Keysmith. In its corrupted form on turn 6, following a non-trivial investment of a 5-drop on turn 5, this card doesn’t even produce strong tempo. Spell Mage could be interested in this card (Apexis Blast is a decent activator), but we’re less enthusiastic about a more aggressive Secret Mage or slower Mage archetypes. 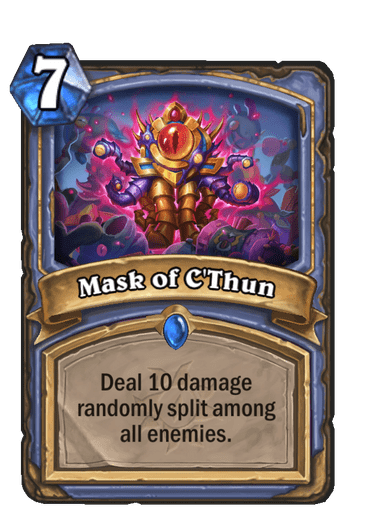 We feel like this is a bit of a sleeper card that’s unfairly labeled as trash. There’s a clear comparison with Avenging Wrath which doesn’t paint Mask of C’Thun in a very good light, but Mage and Paladin are very different classes. Mage is far more likely to be interested in Avenging Wrath or other massive burn cards since its aggressive decks throughout history have relied on burn (and there isn’t much burn available right now), while Paladin is far more focused on the board. It’s not out of the realms of possibility that an aggressive Mage deck would run Mask of C’Thun as a top-end finisher. On an empty board, Mask is a 7 mana Pyroblast that isn’t one-dimensional since it can also help you swing the board. If Secret Mage ends up being viable, we think it will seriously consider Mask of C’Thun. 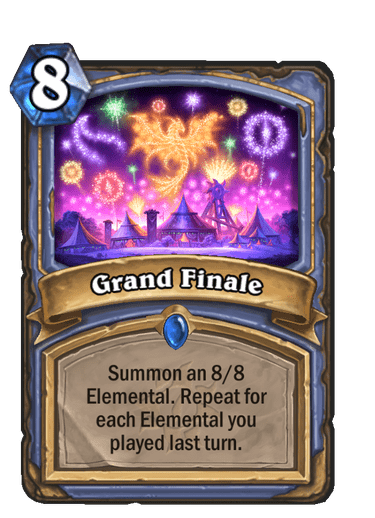 Grand Finale is potentially a tremendously powerful finisher, but the archetype it belongs to is highly questionable. It demands a heavy focus on elementals, a tribe that has yet to prove its merits in dedicated tribal decks. Confection Cyclone is great, but after looking at other available cards from this tribe, we’re very skeptical. Grand Finale’s best chance of seeing play is in a Cyclone Mage deck that carries an elemental spin. But even in that deck, we’re not sure how consistently we can activate Grand Finale. 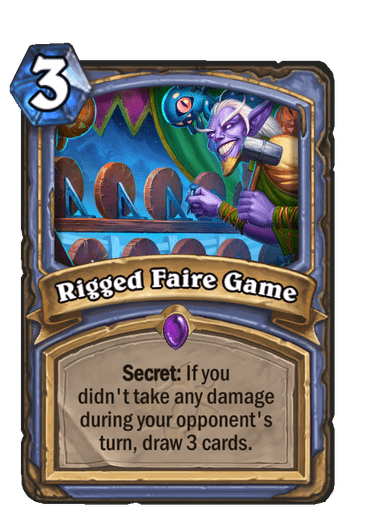 Drawing 3 cards for 3 mana is clearly very powerful, with a polarizing requirement that’s not always the easiest to meet. Against a passive opponent, this is quite easy to proc as you will usually be on the offensive and getting more fuel to pressure your opponent is fantastic. Against a more aggressive opponent that looks to pressure you, Rigged Faire Game can spend a long time not activating.

Fortunately for Secret Mage, Occult Conjurer is a card that adds tension to the opponent’s decision on whether to proc it. If Conjurer ends up being strong, Rigged Faire Game is a good partner alongside it. 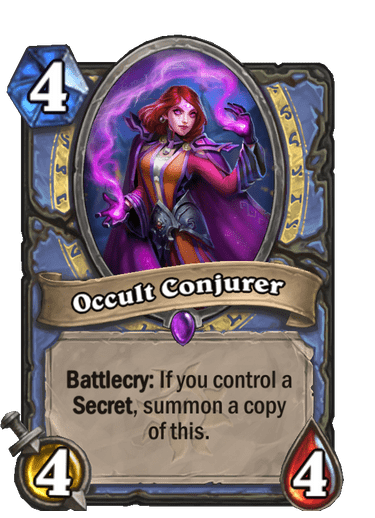 A 4 mana 8/8 that can be dropped on-curve following a turn 3 Kirin Tor Mage/Game Master, or a turn 2 Arcane Mysteries, looks very good. If Secret Mage becomes a competitive deck, it will likely be the result of this card. Much like Petting Zoo, it punishes opponents for not walking into secrets. It provides a pathway to come back against aggressive decks when they don’t proc Rigged Faire Game, and it produces enough pressure on the opponent that allows the Mage to close out the game with burn. 4 mana 8/8 is as simple as that. 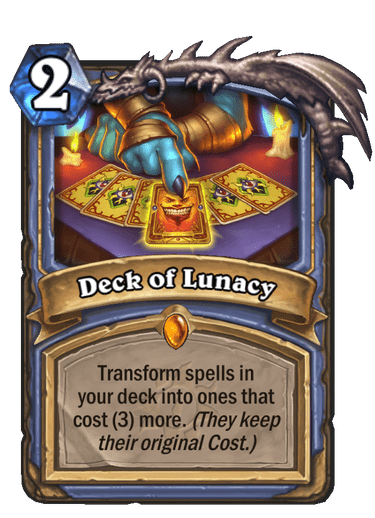 This card can generate spells from any class, so there is no method to the madness, which means there is no coherent game plan that results from playing this card. It’s about running a bunch of cheap spells and hoping to draw newly generated replacements that can beat the opponent through tempo. These kinds of cards have been experimented with in the past but haven’t panned out since it’s very important for a constructed deck to have a semblance of consistency, even when its game plan involves random generation. Deck of Lunacy feels like it was designed to be a “fun meme” since it could become incredibly toxic if it ever ends up being genuinely good. We’re going to assume there was playtesting involved and this isn’t a Keleseth on 2. 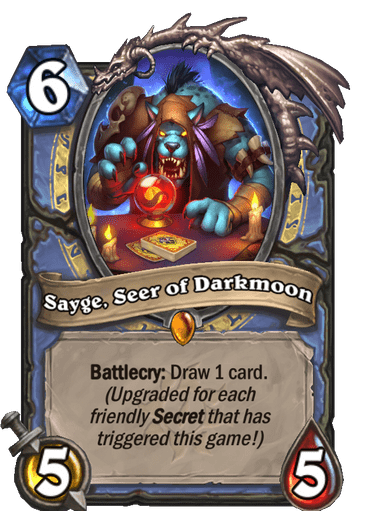 This is the strongest draw engine for secret decks that we’ve seen since Aluneth. In fact, Sayge could be strong enough to encourage other archetypes to run a small secret package. A 6 mana 5/5 that draws 2 cards is quite good, and it will often draw more than that. Aggressive Mage decks are usually desperate for draw since they’re burn-centric, and Sayge provides that top-end reload. Clearly a good card, but the archetype it goes in is still questionable.

Mage’s set feels very much like a dud when you consider that the card we’re most excited by is a glorified Fire Fly. Indeed, Jaina hasn’t received any surefire game changers and it’s coming at a pretty bad time for the class. Cyclone Mage, its cornerstone archetype, has suffered balance changes to Evocation and Astromancer Solarian that have severely weakened it. It’s now a fringe ladder deck with a poor win rate.

Did Cyclone Mage get anything meaningful in this set to make up for the nerfs? We think Confection Cyclone will be a strong card for the archetype, and we’re intrigued by the possibility of using it to enable Grand Finale. The scarcity of strong elementals makes this quite challenging from a deckbuilding perspective, but we think it is possible that Cyclone Mage reaches a strong and competitive level. It has the best shot, especially with Yogg-Saron at its side.

As for Secret Mage, we’re not buying into any hype surrounding this one. While some of the new secret-synergy cards are certainly nice, you encounter a massive issue once you attempt to build the deck and find out it has no meaningful early game. An aggressive deck without strong plays at 1-2 mana is very unlikely to successfully function. We miss Mana Wyrm…

Late game strategies within the class have been pushed out of the meta long ago and we’re not sure they have the means to come back. Mage doesn’t strike us as a class that can utilize most of the Old Gods well, so once again, Grand Finale is the most intriguing choice to try and make work under the scarcity of strong elementals.

Tough days are ahead for Jaina. Can she pull another Yogg out of the hat and clown her way through? Answers will be given at the Darkmoon Faire.