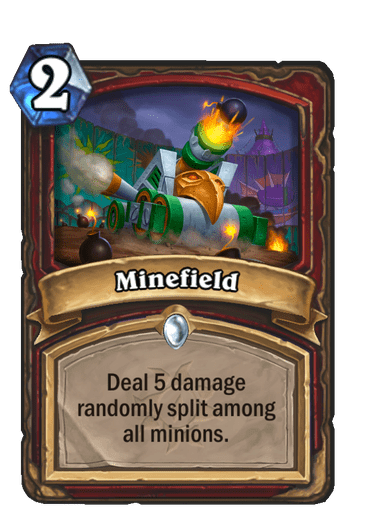 This is a very good removal tool for Control Warrior decks. Warrior has been struggling recently at fending off early aggression, and Minefield provides the perfect answer to the first few minions when you’re playing a deck that tends to be passive. This is essentially Dyn-o-Matic’s naked battlecry, but it comes online faster and at a crucial stage of the game. 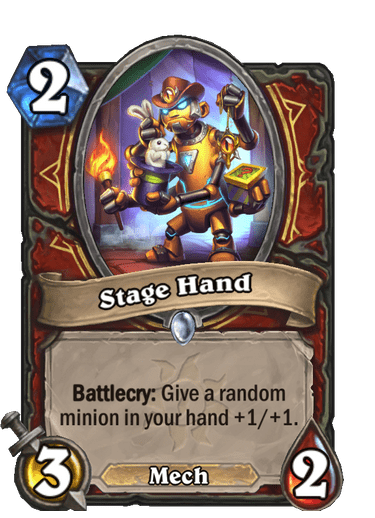 This is a weak and boring card. Hand buffing needs to be stronger than that to see play, and there are probably better mechs to run in a menagerie deck than this one. If there aren’t, we’re in trouble! 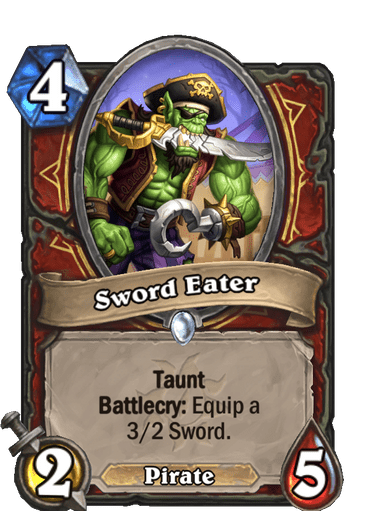 This card is so overloaded, and not in the bad Shaman way, but in the good, busted way. A 2/5 taunt on top of a 3/2 weapon for 4 mana is silly and creates a tempo swing by itself. Sword Eater is incredible both defensively and offensively and provides pretty much everything you want in the mid-game. Just super jacked up. 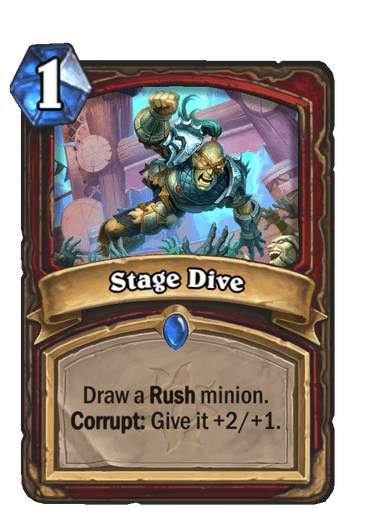 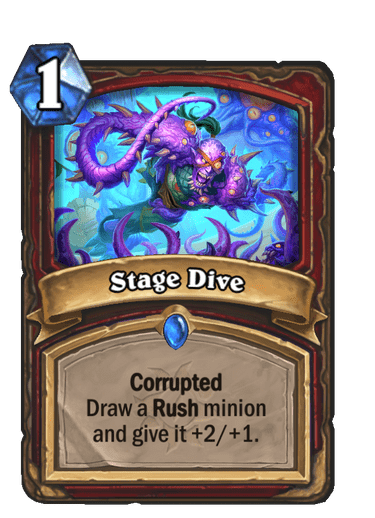 This isn’t as good as Town Crier. That’s pretty much the only negative thing we can say about this card. A 1-mana corrupt is basically corrupted by anything, but does it really matter? Warrior would run this card even if it couldn’t be upgraded because tutoring rush minions in this class is so extremely valuable. Stage Dive is guaranteed to be in nearly every Warrior deck. The corrupted form just guarantees it being nuts. 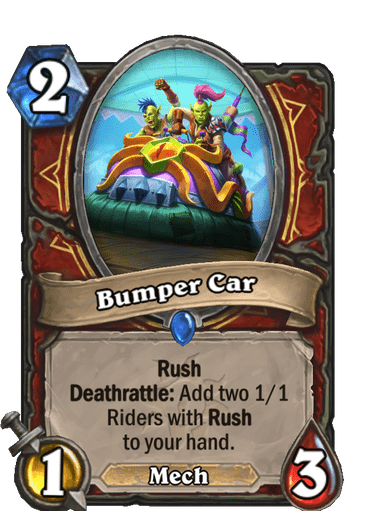 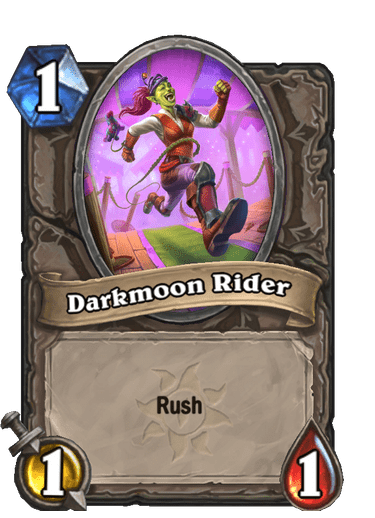 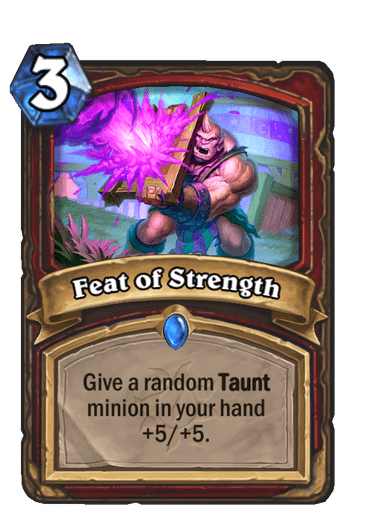 We wonder how many of these taunt buffing cards are we going to see from Warrior. The stats just keep getting ramped up to get them at a playable level every expansion, but it never happens. This will not succeed either. How about a 4-mana spell that gives a random taunt minion in hand +8/+8, Blizzard? That might do it. 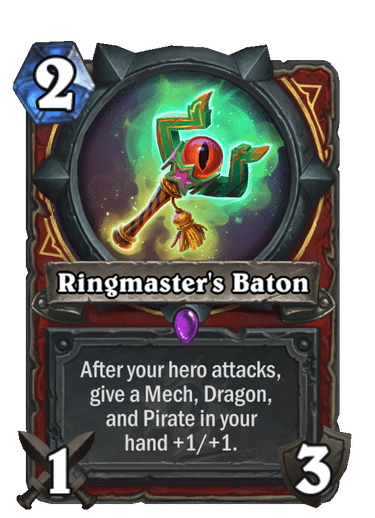 This is a specific weapon for a menagerie archetype that seems to be getting support for Warrior. This weapon is worth up to 18 stats in buffs over three turns, which is pretty good for a 2-mana weapon. These buffs scale well with keywords, which are also available for the class. Baton’s problem is its lack of strong synergy with Corsair Cache, its awkwardness with Sword Eater, as well as its slow impact on the board. 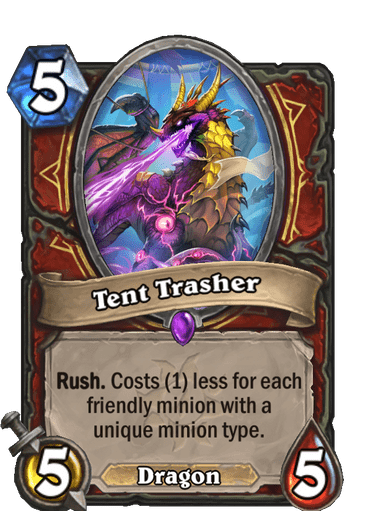 This could be a very powerful enabler for the menagerie archetype. We’ve learned by now not to underestimate rush minions that can be significantly discounted. Though the condition isn’t trivial, the availability of 1-mana pirates as well as Thrasher’s strong baseline cost leads us to believe this card is quite good. 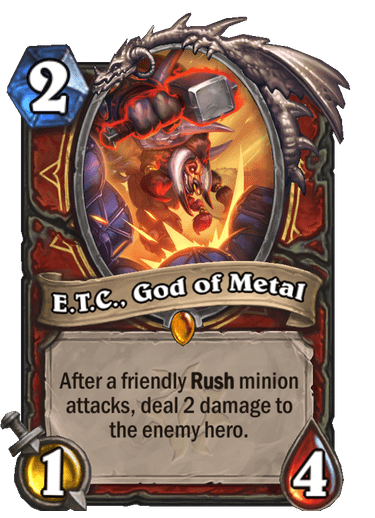 This card is a bit weird since it usually pulls you into speculation over some weird OTK combos with Bloodsworn Mercenary, and none of them seem realistic. If we just judge this card as a standalone threat with a few rush minions, it’s probably not good enough. It’s potentially strong in Galakrond Warrior thanks to Scion of Ruin, but we wouldn’t hold our breath. 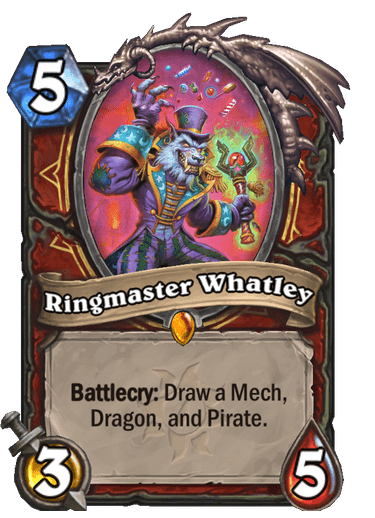 Whatley is basically a cheaper, and stronger Curator. Drawing 3 cards is a great deal on top of a 5 mana 3/5. Not only is this legendary an auto-include for a menagerie deck, but it incentivizes sprinkling some tribal minions in other Warrior strategies just for the tutor effect. Just a strong all-around card that adds interesting tension to deck-building.

Warrior’s set is mixed. It has some seriously powerful cards that should become staples for many Warrior decks in the future. On the other hand, it also has some very underwhelming additions that we don’t see making any impact. We’ll also say that we’re very skeptical of Menagerie Warrior and will be surprised to see it succeed.

The Warrior class is notoriously known for its weakness at closing games, especially when it comes to its faster archetypes. Unless you’re relentlessly fast with tons of over-the-top weapon damage like Pirate Warrior, “Tempo Warrior” decks often hit a wall when faced with decks carrying strong defensive tools.

These “Tempo Warrior” decks usually need a burst combo to end games against control decks, as was seen in Patron Warrior years ago, as well as in Enrage Warrior recently thanks to Bloodsworn Mercenary. When Warrior simply produces stats on the board, it’s generally lackluster.

We think slower warrior archetypes hold more promise because of this set. Control Warrior can run C’Thun as a finisher and perhaps significantly shift its horrendous matchup with Priest, for example. Bomb Warrior should still be around, improving its survivability thanks to Minefield and Stage Dive, and its strategy should remain very frustrating for some decks that could emerge with this set. Slow Warrior decks could also sprinkle some tribal minions and make use of Whatley as a card draw engine.

All in all, Warrior should be in a decent enough spot to remain very competitive. We predict that it will go the ResidentSleeper route, but those wacky tribal decks could make us eat our words down the road. Who knows?