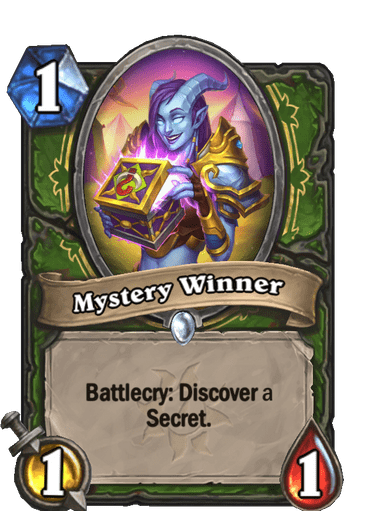 Secret Plan was already a playable card at 1 mana, and this is a 1/1 body that produces the same effect for the same cost. This will be played by Secret Hunter, as well as other decks looking for a value 1-drop. Just good. 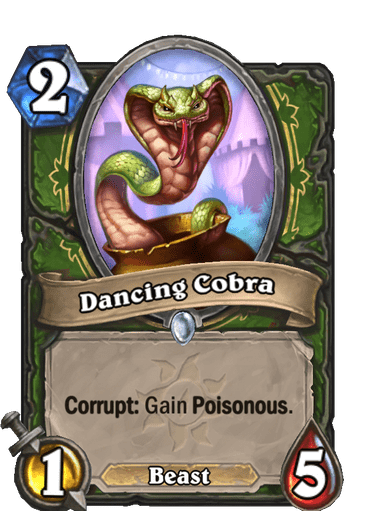 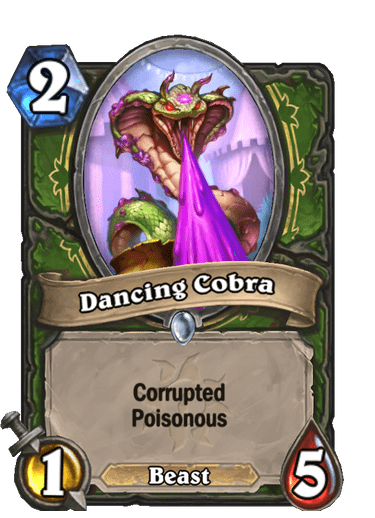 This 2-drop is just too slow. We’d never be interested in playing a 2 mana 1/5 on turn 2, so this is only playable in corrupted form and the prospect of dropping it on turn 4 is not very enticing. Cobra provides no pressure on the opponent with its measly 1-attack. We’re playing Hunter, and we want to hit harder than that. 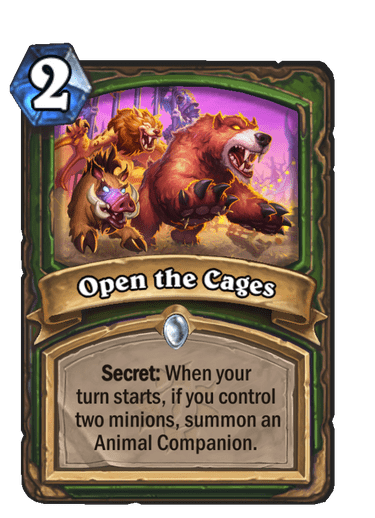 This secret looks weak and situational at first. It requires us to be ahead on board to activate, which means our opponent can punish us hard if it manages to win the early game. The good news is that this secret is meant to be hard to activate. It acts as an enabler to Petting Zoo, since it can never proc on turn 2 and guarantees a 3 mana 6/6 follow up. It’s also strong with Hyena Alpha. In the context of needing secrets to stay up, Open the Cages is perfect. 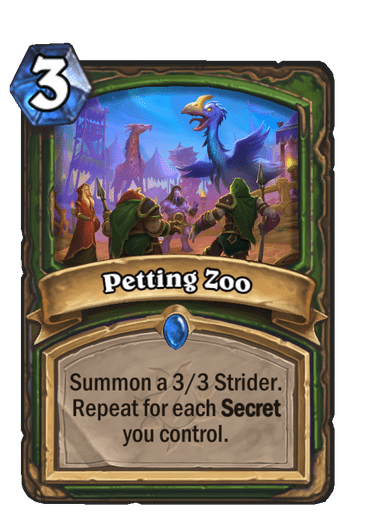 This card could be at the level of Emerald Spellstone in enabling a Secret Hunter deck. Just playing a secret on turn 2 into a turn 3 Petting Zoo is a very powerful opening, and we can choose secrets that our opponents cannot trigger without us having board (such as Pack Tactics or Open the Cages) to reduce their counterplay options. What makes this card particularly powerful is how hard it scales. Our opponent generally doesn’t want to activate our secrets when it isn’t convenient, but Petting Zoo is a threat that punishes leaving up multiple secrets. This card is just a complete powerhouse. 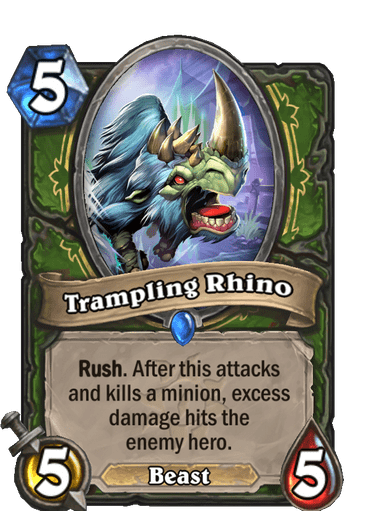 A 5 mana 5/5 rush is pretty good, and it has some nice upside in dishing face damage while trading. Trampling Rhino was probably intended to be a handbuff synergy minion, and though its baseline stats are good enough, we’re not sure it will find a deck to be included in. The Handbuff Beast archetype has been a complete dud for two expansions, and once you see Don’t Feed the Animals, you’ll agree with us that it should continue to be a dud. 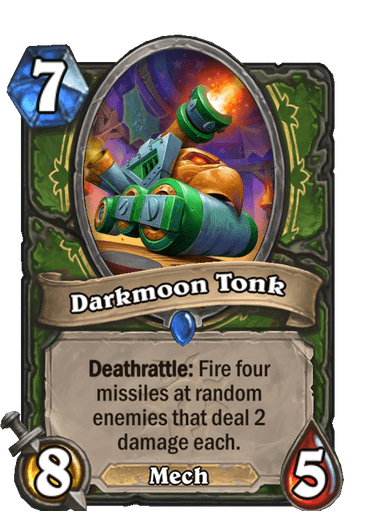 This card will go as far as Maxima and/or Oblivitron carry it. At 7 mana, Tonk is too expensive to see play as its effect is far too slow. There are too many tools available to other classes that would heavily punish spending 7 mana on this card, but its high attack value and deathrattle become devastating if it’s shot out of the deck by Maxima or shot out of the hand by Oblivitron. Since it’s hard to predict how strong this package is, it’s hard to predict whether Tonk sees play. There is something there, so we give it the cowardly tentative score. 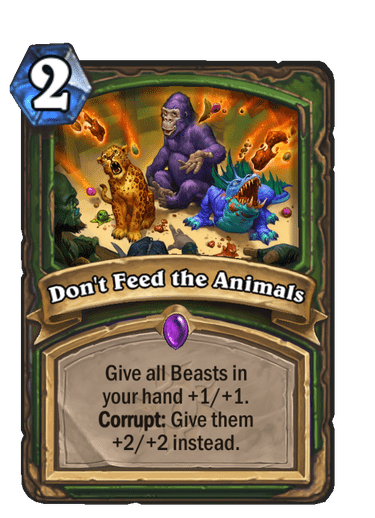 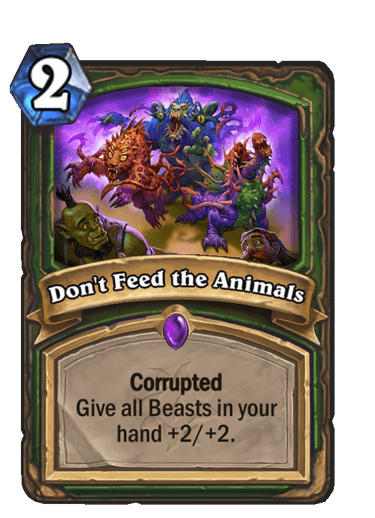 Remember Grimestreet Outfitter? That was a 2 mana 1/1 Paladin minion that provided a +1/+1 to ALL minions in your hand. Considering that this card has no body and only applies to beasts, it’s safe to say that it is terrible on turn 2 in its uncorrupted form. Its corrupted form is only playable on turn 4, and even then, we’re not sure it’s impactful enough. Beast Handbuff has been a failing strategy for two expansions, and Don’t Feed the Animals doesn’t give us the confidence that things will be any different now. 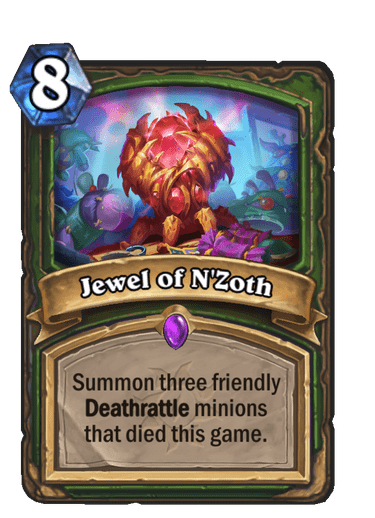 We know that the original N’Zoth was good, so now Hunter is getting a mini N’Zoth for 8 mana, and it can play two of them? What? Considering that N’Zoth was still very strong even when it summoned 3 minions, Jewel of N’Zoth looks like an even better card. The biggest drawback of Jewel of N’Zoth is that it’s a Hunter card, which is a class that usually doesn’t count on getting to 8 mana.

Beyond Darkmoon Tonk and Savannah Highmane, which are aggressive in nature, Jewel of N’Zoth could bring about a more defensive Hunter deck running Khartut Defenders. It certainly has the potential to shift the class into a very different direction than what it’s used to, but we have serious doubts about whether this direction can be successful. 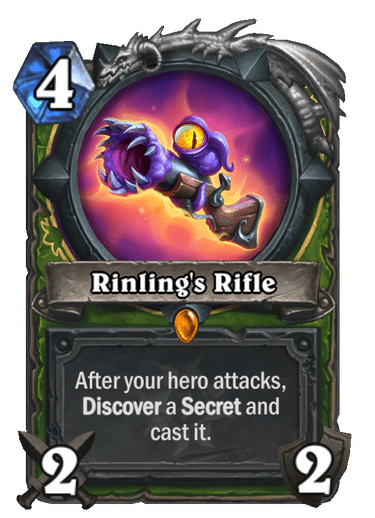 This card is a package of strong tempo and strong value. For 4 mana, we get to discover and play two secrets on top of a serviceable weapon. Not only is this card insane in a theoretical Secret Hunter deck that runs Petting Zoo, but it could also be powerful enough to be a mandatory inclusion in Highlander Hunter. Arcane Keysmith was a 4 mana 2/2 minion that discovered and played one Mage secret. It saw a lot of play. Rinling’s Rifle is better and is simply far too good to be ignored. 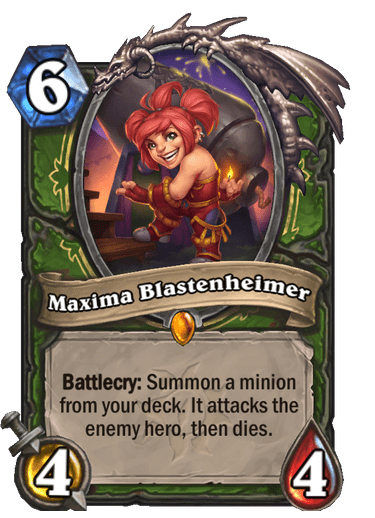 Maxima is a unique build-around card with a very (very) heavy deck-building restriction, which requires us to play high-value deathrattles that can punch hard and avoid running small minions. Our best bet on Maxima being successful is in a Spell/Secret Hunter deck running Petting Zoo and a Maxima top end with Darkmoon Tonk. In this context, Maxima can act as a devastating finisher that can deal up to 16 damage to the opponent’s face.

It’s hard for us to think of other very strong applications that don’t look like memes. If it works, it will hurt a lot, but it probably doesn’t.

Hunter’s fate could be repeating itself. We get a new set with some wacky synergy and potentially new archetypes. We experiment with theorycrafting and find that it’s all very clunky and awkward. The established Face and Highlander Hunter receive new upgrades and proceed to carry Rexxar’s flag for another 4 months.

If you’re a fan of these aggressive Hunter decks, they got some cool new stuff. Petting Zoo is probably the most impactful addition and one that will push both archetypes into a more secret-centric direction alongside the extremely powerful Rinling’s Rifle and Inconspicuous Rider.

But we’re less confident about new archetypes, and perhaps it’s the result of them being so challenging to build and figure out. Maxima incentivizes a very extreme direction of deckbuilding that doesn’t seem to result in a consistent shell. Darkmoon Tonk looks like an individually powerful card, but one with many question marks about its execution. Jewel of N’Zoth would be absurd in some other classes, which is probably why it’s balanced within the Hunter class.

Surprises could happen, but we generally expect Hunter to look similar to what it looks like now, with just those secret-synergies added. You have the full-throttled Face deck and the more tempered Highlander deck. They’ve done well before, and there’s no reason to think they won’t continue to do well.