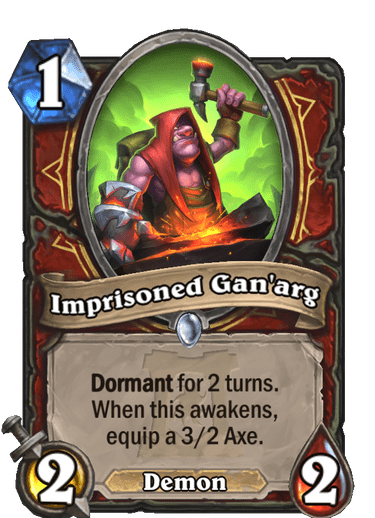 Remember what we said about 1-mana dormant minions? Forget about it for this card. Weapons are not something you can wait for, since they are usually reactive (much like AOE) and you cannot afford to have such a delayed effect for them. In addition, Warrior has so many better weapons to equip on turn 3. Gan’arg is just a non-starter. 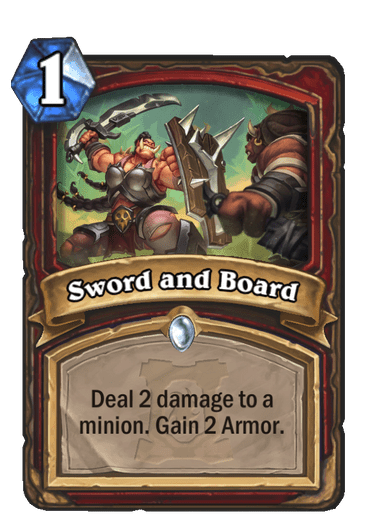 This spell just doesn’t do enough. Even a Highlander Warrior deck would likely pass on this card. There’s a crucial breakpoint between 2 and 3 damage when it comes to removing early game minions. 3 damage removal is commonly played. 2 damage removal isn’t, and the 2 armor hardly makes it any better. 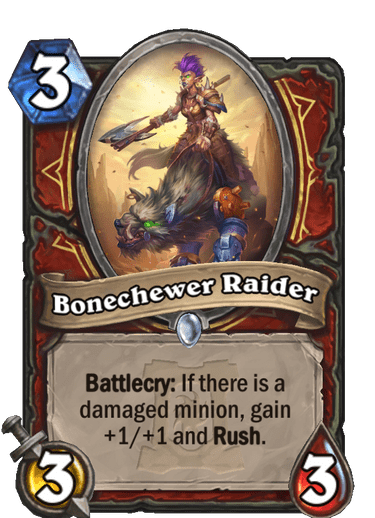 A 3-mana minion with a very narrow condition to be playable, and even then, it’s a worse rush minion than Restless Mummy. If we’re playing an aggressive deck, we’d much rather run Bloodsworn Mercenary, Bomb Wrangler and Frothing Berserker as they produce real pressure on the opponent while this is a purely reactive card. If we’re playing a control deck, it doesn’t seem to be worth the investment and it’s hard to activate on-curve. Just an all-around underwhelming minion. 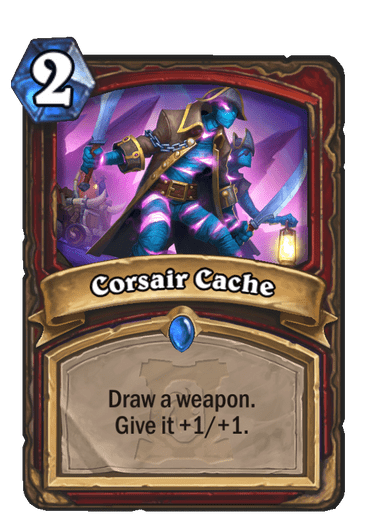 Let’s think about how many potentially deck defining weapons are currently available in Warrior: Ritual Chopper, Livewire Lance, Ancharrr, Wrenchcalibur and now Bulwark of Azzinoth. Would it be beneficial for archetypes that utilize these weapons to be able to draw them more consistently on top of upgrading them? Absolutely. In fact, we struggle to see how Corsair Cache doesn’t see play at some point. It’s just way too good with the available weapons at Warrior’s disposal. 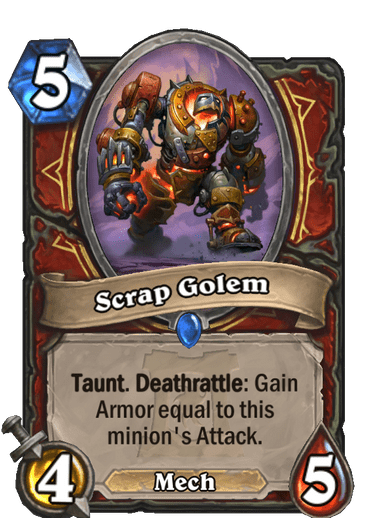 Rotten Applebaum that gives armor instead of health. The mech tag is meaningless since there is no Mad Genius or magnetizing mechs, but the upside of this card is its interaction with Armagedillo and other hand buffs. The legendary is a core card in current Control Warrior builds alongside Tomb Warden, so this might be the addition it needs to keep going into the next year. 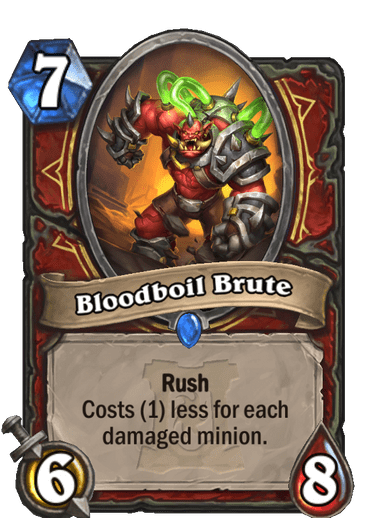 A 7 mana 6/8 rush minion is not even bad, and it can get further discounted by any damaged minion on the board. At 6 mana, this would be very strong. At 5 mana, this card would be ridiculous, and it’s not hard to get it to this cost with a simple trade. We could also combo Bloodboil Brute with a whirlwind effect, such as Bladestorm or Risky Skipper, for a big tempo swing. The card is a bit situational and requires synergy to work, but there’s definitely something to explore here. 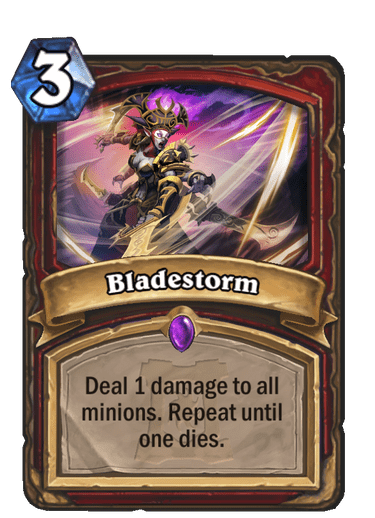 A new Whirlwind-like card, which essentially replaces Warpath. We think Warpath is more consistent, but there are situations where Bladestorm is better. Bladestorm is stronger against midrange decks that play a lot of beefy minions. It can act as a pseudo-Deadly Shot in some situations. Of course, the ceiling of this card is killing token boards, such as Glowfly Swarm or Chef Nomi. In an emergency, it could just help us activate Plague of Wrath or Bloodboil Brute. Bladestorm is just versatile enough to see play in any Control Warrior deck going forward. 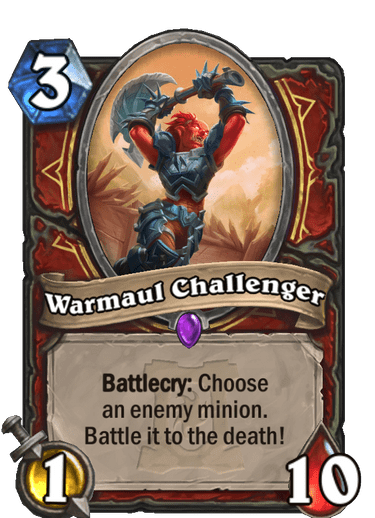 Strange card that’s hard to assess at first glance. So, some quick math to figure out how good this is. Against a 2/3 or a 3/2 (strongest early game 2-drops), Challenger kills them and survives as a 1/4. That’s very good work for 3-mana. For most 3-drops, it will either survive as a 1/1 or trade completely evenly with them. Once you get to bigger bodies, Challenger doesn’t work. The conclusion is that this is a decent removal “spell” for early game minions. Could be an option in Control Warrior. 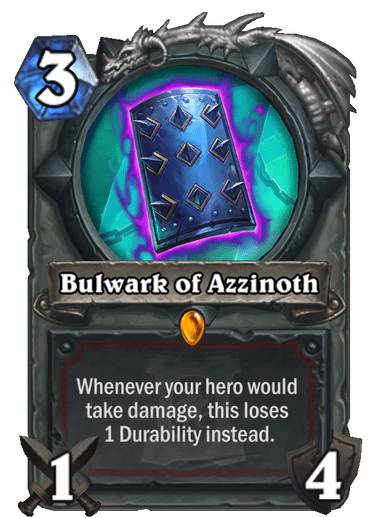 This is a very controversial card that some think is unplayable. We can understand why they feel this way: it’s a card that is basically an indirect form of armor gain. It usually does nothing else other than mitigate damage, and cards that only gain armor are almost never played.

However, everything is dependent on numbers. There might be a point at which a card would mitigate enough damage that even if that’s its only role, it would be good. We think Bulwark reaches that territory. Four swings from early game minions can be about 8-10 damage. Against a midrange deck, this can easily mitigate 12-15. Against combo decks with burst, this can completely shut them down. It’s only clearly weak against Rogue and Demon Hunter that can hero power the durability down without losing too much tempo in the process

So, we think Control Warrior is going to play this, and draw this with the help of Corsair Cache. And this event will probably upset you. 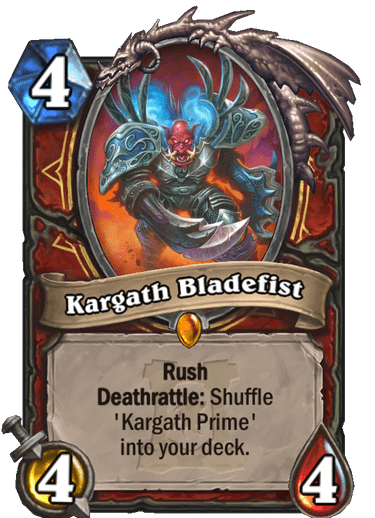 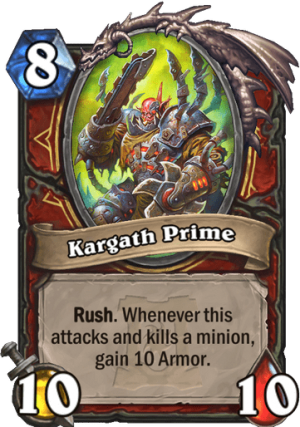 A 4 mana 4/4 rush is already a pretty strong card. Kargath Prime is ridiculous and becomes the ultimate stabilization card. It’s going to remove almost any relevant minion in the game while gaining 10 armor. And if it isn’t killed on the turn it’s played, it will likely give you another 10 armor. This is a devastating card for any aggressive or midrange opponent while being quite good in slower matchups too. An absolute no brainer inclusion in most Warrior decks.

Year of the Dragon Rank: 4th

Much could be said about the losses Warrior will suffer through rotation. You’ve got the Mad Genius, Dr. Boom. You’ve got Town Crier and Eternium Rover, which are two of the best 1-drops in the game and highly responsible for Warrior’s success throughout this year. There’s no doubt that these losses will be brutal to the class. However, there are some packages of cards that are severely underrated and forgotten that will still be available.

We’ve got the Armagedillo Taunt package, the Blastmaster Bomb package, the Galakrond package and the aggressive Enrage package. Each of them offers clear game plans that have proven themselves to be successful over the past year, and they just need the right shell to accommodate them.

In addition, Warrior’s removal toolkit is still incredible. It’s got great AOE, single target removal and value generation. So, Warrior’s Ashes of Outland set didn’t need to be that amazing. It’s got some cards we don’t think are worth the trouble, but it also received some new additions that Warrior decks will be interested in.

Corsair Cache greatly encourages Warriors to base their strategies around weapons, and Warrior certainly has weapons worth building around. Kargathn Bladefist is going to be a card that shows up in nearly every Warrior deck because it’s plain ridiculous. Warmaul Challenger and Bladestorm offer new removal options for defensive Warrior decks.

We’re not sure exactly how Control Warrior will look like in Ashes of Outland, but it has options to experiment with and we think it could make a comeback. Taunts? Bombs? Galakrond? Highlander? A combination of them? Whatever Control Warrior figures out to be the best late game approach, it’s likely to enjoy strong matchups into two classes we expect to be highly prevalent and successful (Hunter and Demon Hunter). Demon Hunter may have a lot of card draw, but it has a finite amount of damage and threats, which Control Warrior usually relishes playing against, while Dragon Hunter is known to struggle against the tanking archetype.

Meanwhile, we can’t rule out Galakrond Warrior recovering from the loss of its premier 1-drops and Acolyte of Pain as well. It’s still got Risky Skipper and alternative card draw options available to it, and we know how powerful Galakrond is as a finisher. The deck has already experimented with Ancharrr before, so it could just add Sky Raider into its build, Clear Cache to tutor a key weapon and Bloodboil Brute for its swing potential. There’s plenty to work with there.

The losses will hurt, but it shouldn’t cripple the class. Plenty of classes would love to be in its position going into Tuesday. You can ask Priest players how they’re feeling.