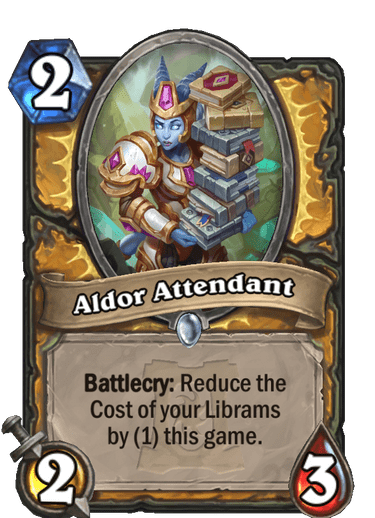 Solid 2-drop with an effect that can’t be appreciated until we know what Librams are and what they do. So, we’ll give this a quick score of 3 and it will be understood later. 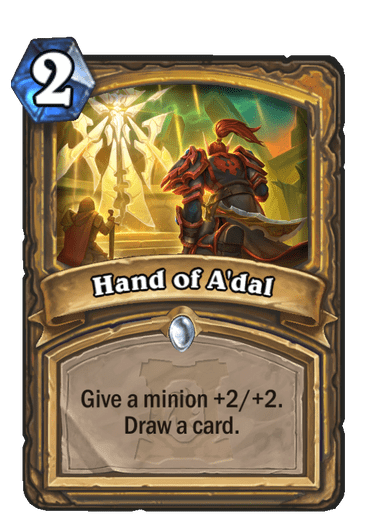 After getting multiple garbage sets that saw Paladin reduced to one-dimensional tribal decks, Team 5 has had enough and pulled out the big guns. A 2/2 buff for 2 that also draws a card is simply not fairly costed at all. Every single Paladin deck will play Hand of A’dal for the next two years. Holy-Wrath Paladin, a combo deck that plays no meaningful minions and ignores the board 90% of the time, would have played this card if it was available to it. Hand of A’dal is just unconditionally, outrageously pushed. 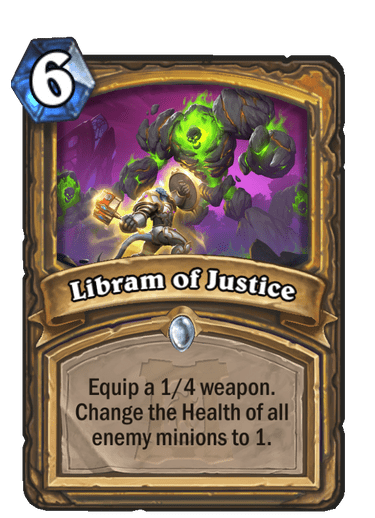 We’re going to make a bold call here and say that Libram of Justice is one of the best cards in the set, if not the best. It is an asymmetric Equality alongside a Light’s Justice that can very easily cost 3 mana by the mid-game. If Paladin becomes a contending class against the top meta decks, it will likely be thanks to this card. It brutally answers most of the unanswerable boards you’re familiar with from Descent of Dragons. Huge Galakrond turns from Rogue, Warrior, Warlock and (used to be) Shaman? No problem for Libram of Justice. Dragonqueen Alexstrasza high rolls? No chance against this. The fact it’s asymmetrical means you can destroy anything your opponent has done, while not even taking a break yourself from developing your own board and pushing forward. It is unequivocally incredible for almost any kind of Paladin deck. 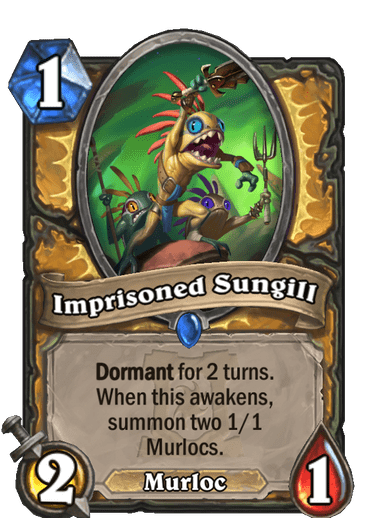 This might be the most slept on card in this set, with most players certain that Sungill is complete garbage. After all, a dormant minion in an aggressive deck? Surely you jest. But we’ll be the mavericks here and say, you might be missing something here.

The reason why we think this card has a lot of potential lies in the unique traits of murloc decks. Murloc is the most snowball-oriented tribe in the game. The moment you leave up multiple bodies of these angry fishmen, they get angrier (buffed) and threaten to overwhelm you. The key to beating murloc decks is picking their minions off one by one.

But what happens if you can set up three bodies with one card, bodies that cannot be answered when they arrive to the board. Indeed, when Sungill awakens, we can immediately buff our board without giving our opponent a turn to respond. Righteous Cause, Coldlight Seer, Felfin Navigator and Scalelord are all strong murloc buffs that can connect on a Sungill at various stages in the early to mid-game without opponent intervention. Imprisoned Sungill might be the only dormant minion that’s not heavily reliant on being played on curve. It’s all about setting Sungill up for a bigger turn, and 1-mana is a small investment to make for a potentially big payoff. If Murloc Paladin ends up being a thing, it will absolutely play this card, and it will like it. 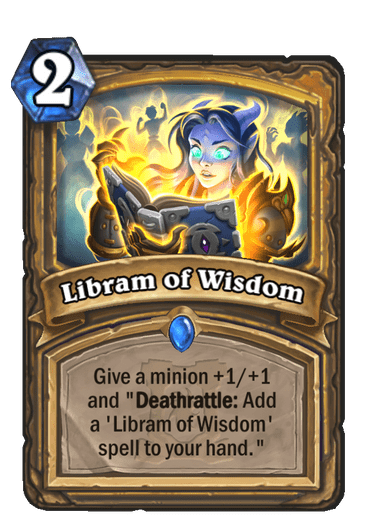 An Explorer’s Hat reprint. The Hunter spell was an unplayable pile of garbage that never saw the light of day. It’s a good thing that Libram of Wisdom can easily be discounted to 0 mana and provide a consistent stream of value and tempo. If only there was a way to generate all of the Librams we’ve cast in one turn… 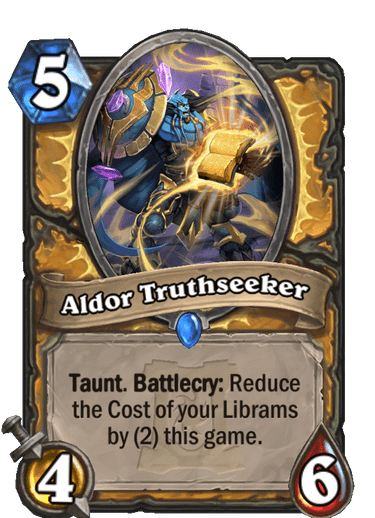 This is a very strong discount card. Much like Attendant, it pays no stat penalty for the effect and a single Truthseeker will fully discount Libram of Wisdom for the rest of the game. If you have one in your hand, you can immediately buff the Truthseeker to get a 5/7 taunt on the board. Truthseeker is why Librams become unfairly cheap, quickly. 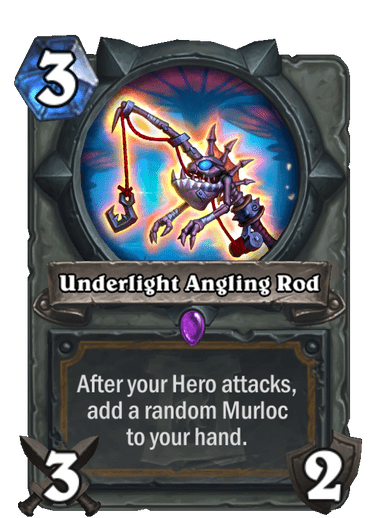 A 3/2 weapon for 3 mana that draws two cards is pretty good. There are 3/2 weapons for 3 that do less than that and see play. An absolute no brainer in every Murloc Paladin deck, but we suspect that other Paladin decks will also use this card. Card advantage is card advantage. 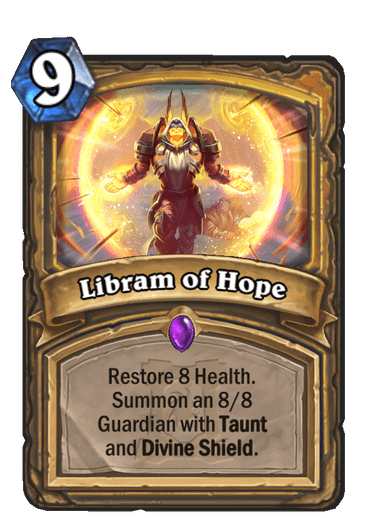 Paladin gets its Hidden Oasis, but with a stronger body that can be very difficult to deal with. Can lock down aggressive matchups while heavily pressuring slower decks. Libram of Hope can cost as little as 3 mana but will usually cost around 6, which is still a very good deal. 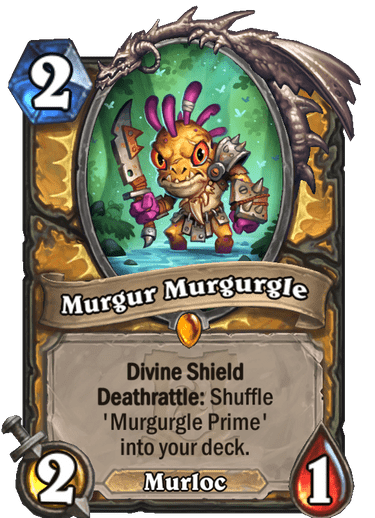 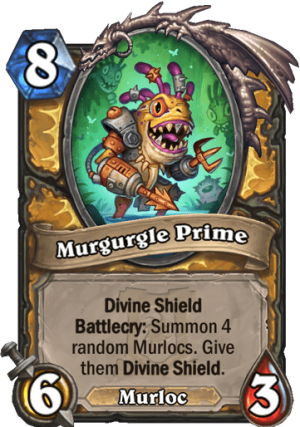 This card fits in with the rest of this Paladin set. Absurd. The first body is a slightly worse Shielded Minibot with a murloc tag. Meanwhile, Murgurgle Prime makes a huge board that’s extremely sticky and resilient. Every Paladin deck, not just a tribal murloc deck, will be taking a serious look at this card as a secondary win condition. 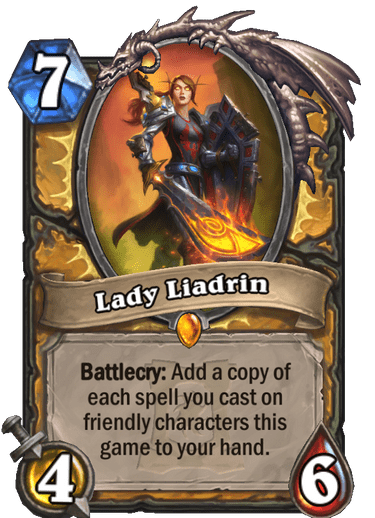 So, about those endless 0-cost Librams of Wisdom, Lady Liadrin delivers them. But she also delivers us Librams of Hope as well as Hands of A’dar and perhaps even a Blessing of Kings. When this card was initially revealed, we thought it would be the “same old Paladin” set. A slow, 7 mana 4/6 that doesn’t really have game winning potential. After seeing the entire Paladin set, it’s clear that Liadrin has game winning potential. Good thing she can’t give you more Librams of Justice. That’s where the line is drawn.

Year of the Dragon Rank: 10th

Paladin’s situation looked grim. For months, it was reduced to play a one-dimensional aggressive tribal deck, which is not too different from other times in the past where it only had that going for it. This successful yet unloved Mech Paladin is rotating out of standard. Remnants of Holy-Wrath Paladin follow out the door, with Shirvallah gone from the format. Paladin’s best card in Crystology is also gone with them. Paladin’s Year of the Dragon sets are utterly atrocious, with no direction and no reliable way to win Hearthstone games. Uther has called out in despair that the light is being engulfed by the darkness of Tier 4.

Out comes Team 5 with the salvation required and the powerful set that was needed. Paladin now has a newfound direction, and reliable game plans that will allow it to compete.

Paladin’s Ashes of Outland set can be compared to Druid’s set in Saviors of Uldum. Druid was also a class that was reduced to playing a single aggressive deck since it had no defensive shell that could accommodate a late game plan. The Libram package gives Paladin that shell, a foundation that provides it with needed survivability.

Libram of Wisdom provides incremental value. Libram of Hope provides recovery. Libram of Justice is the unfair answer to the unfair questions the top meta decks are asking. Attendant and Truthseeker overtune these cards and turn them into big tempo plays.

To make sure Paladin does not fall behind in resources, it’s given the most absurdly overtuned buff in the game in Hand of A’dar, and the reload potential of Lady Liadrin.

Suddenly, a possibility of a Control Paladin deck that can soak significant punishment and outlast its foes is not just a dream. Suddenly, Pure Paladin doesn’t look like a joke anymore, and we think this archetype could become a legitimate competitor. Suddenly, Murloc Paladin could also make its return thanks to class-specific upgrades as well as a huge difference maker in the neutral set in Felfin Navigator.

The light has returned. Paladin is back. For justice!