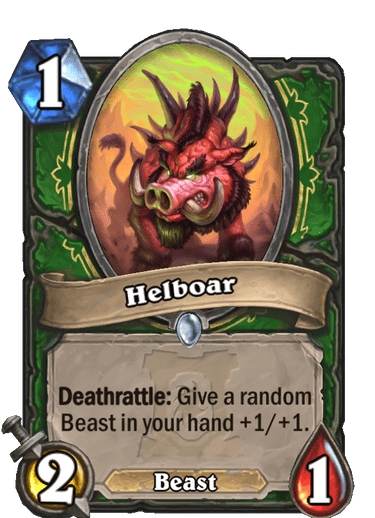 This 1-drop is just okay, but it will probably see play. There is a high likelihood that hand-buffing will become valuable in Hunter, while having early beasts is important in order to abuse Fresh Scent, so a 1-drop with this kind of upside should go into decks. 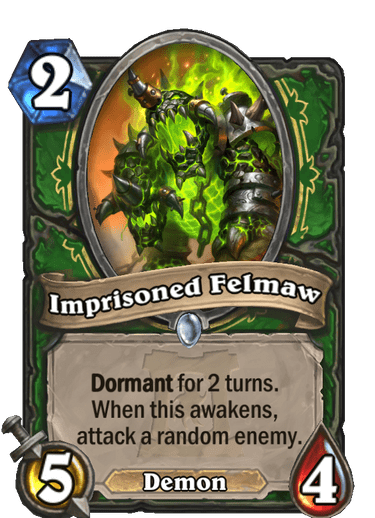 This card faces the same issue most dormant minions do. It’s tolerable if it’s played on curve but becomes a terrible draw later in the game. In a class that’s quite reliant on having board early like Hunter, we just can’t see it making the cut. 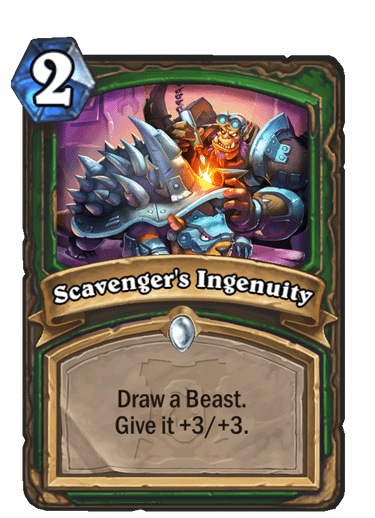 This is a generously costed card. A draw on top of a sizeable hand-buff for just 2 mana is pretty good. Considering that Hunter is receiving some minions that would love to get on the end of this buff, Ingenuity’s chances of seeing play are looking bright. 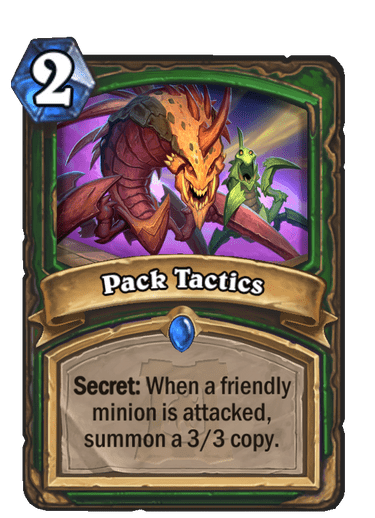 This card instantly becomes Hunter’s best secret. For 2 mana, we get to develop a 3/3 to the board when our opponent attempts to challenge it. The fact that a copy is summoned makes it even better, because if we can duplicate a minion with a static effect (such as a deathrattle), the upside is even higher. Minions with static effects are usually ones that our opponents prioritize to kill first, so this creates a problem for them. 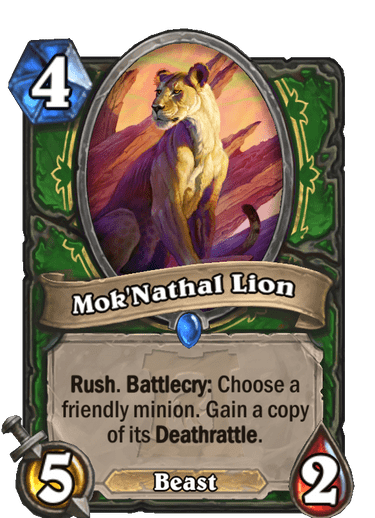 This rush minion looks powerful at first glance. If it can connect on a valuable deathrattle on turn 4, it puts us in a very good spot. However, this card does have some counterplay. Opponents will do all they can to remove potential targets for the lion on turn 3 (much like they do if they fear a turn 4 Houndmaster), so we don’t think this card is completely insane. It’s ‘just’ very good. 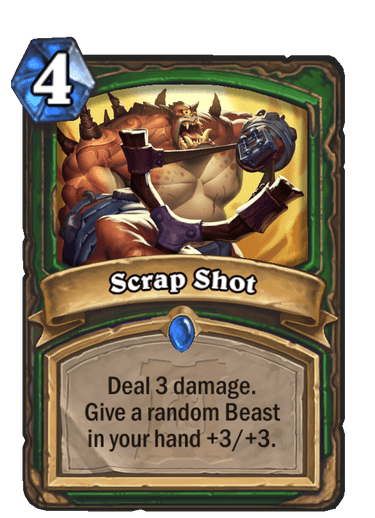 Another sizeable hand-buff card with removal attached to it. It’s easy to compare it to Flanking Strike and be somewhat underwhelmed. Flanking Strike puts those stats immediately on the board, while Scrap Shot has the advantage of being able to go face. This card won’t see play for its standalone strength, but it’s a card that can be carried by an archetype that values the specific effect. 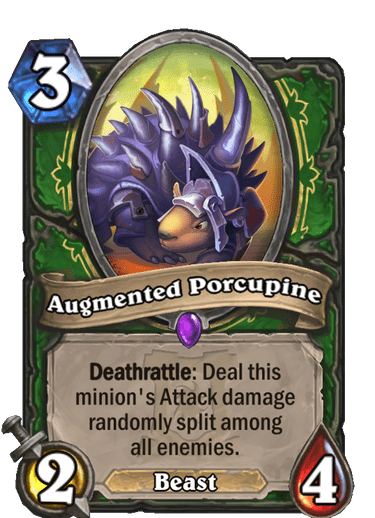 Oh, yeah. It’s all coming together. Porcupine is the build-around card that makes the rest of the package given to Hunter in this expansion make sense. It can get drawn on 2 and buffed by Ingenuity. It’s a prime target for Lion or Houndmaster on 4. It can get buffed by Fresh Scent on the board. It can get buffed by Helboar or Scrap Shot in hand as well.

The key is that buffing this card brings pain to your opponent. It forces your opponent to pick its poison, whether it deals with it now and takes the damage, or risks facing a bigger punishment later. The only issue with Porcupine is that it doesn’t have an immediate effect on the board, so there’s time for your opponent to make that decision. 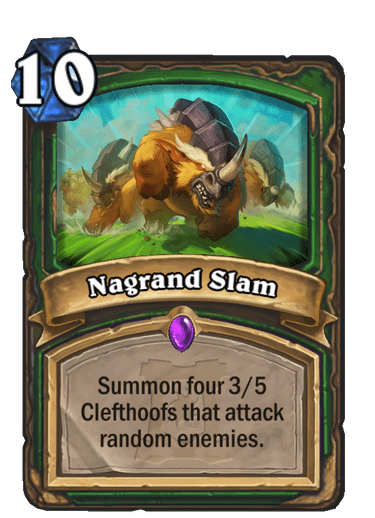 This is a pretty cool spell that can certainly swing the game in your favor. The problem is that we’re playing Hunter and it costs 10 mana. Hunter games are usually well decided before that point. Hunter is also not well-equipped to cheat this out earlier with Kael’thas. Nagrand Slam might be included in Highlander Hunter, but that’s about it. 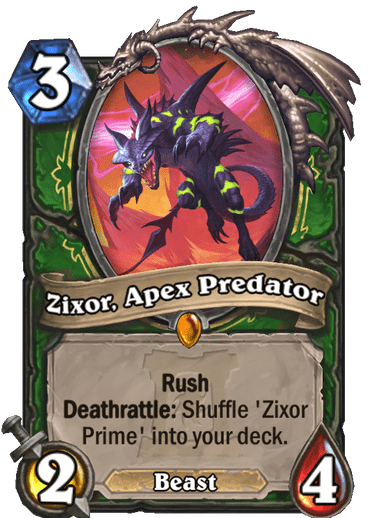 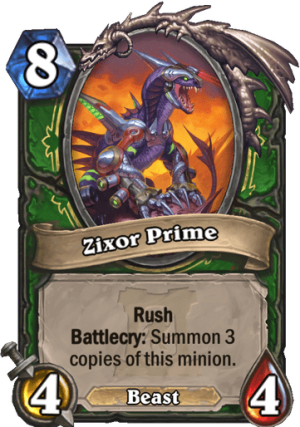 This is an impressive card. The stats are pretty good for a 3-mana rush minion, but the Prime minion is where things really get crazy. For 8 mana, we’re summoning 4 copies of a 4/4 rush that also scale with hand-buffs. There’s no doubt that Zixor Prime can just end games on the spot. It’s a huge comeback card for Hunter, a class that tends to struggle when it falls behind. There are also ways we can increase the odds of drawing a turn 8 Zixor Prime (Mok’Nathal Lion, Diving Gryphon), so this card looks to have some consistency behind it too. 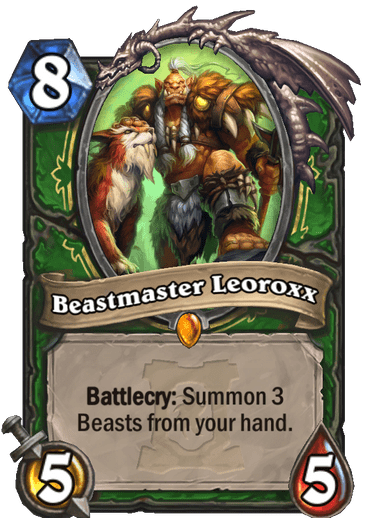 This is potentially another big turn 8 play in Hunter, and another card that works well with handbuffs to beasts. It’s clearly weaker than Zixor Prime, because it’s questionable whether Hunter can have enough beasts in hand on turn 8 to make this work. We’re not as enthusiastic about it for that reason, though it makes for an interesting burst finisher alongside Tundra Rhino or King Krush.

Year of the Dragon Rank: 2nd

These are good times to be a Hunter. Year of the Dragon has been incredible for the class, and its sets are stacked with strong cards. Dragon Hunter loses literally nothing from rotation, with only Leeroy Jenkins a recent casualty. However, this loss is not that significant, and Dragon Hunter has been performing very well even after Leeroy was sent to the Hall of Fame. Similarly, Highlander Hunter has most of its shell intact and it has been an excellent performer alongside Dragon Hunter. Dinotamer Brann’s value has only grown after the departure of Leeroy.

With its dragon core ensuring a strong foundation, Ashes of Outland moves Hunter’s attention back to its original tribe, the beasts. This set’s flavor is hand-buff, which sounds discouraging given the mechanic’s weak history. However, the buff cards look pretty good this time since they’re tied to other effects (draw, removal).

Augmented Porcupine and Mok’Nathal Lion are the most noteworthy build-around cards, and both have blow-out potential. At the very least, they can push opponents into very awkward spots where they cannot afford to leave any of the Hunter’s minions up. To add salt to the wounds, there’s also Zixor Prime, which provides the Hunter with a game-winning swing turn that can rival the best of them with one card.

To conclude, Beast Hunter might be good, but even if it doesn’t work out and the handbuff curse continues, Hunter has two top tier archetypes that are unlikely to go anywhere.