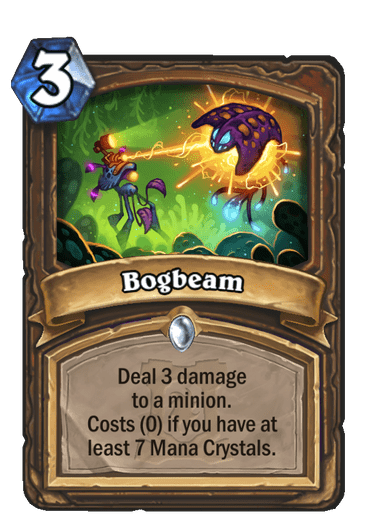 Another Vendetta-like card, this should be an excellent removal tool for any ramping Druid deck. As we’ve said about Eye Beam, dealing 3 for 3 is not that bad in a pinch. Has specific synergy with Overgrowth, which we will talk about soon. 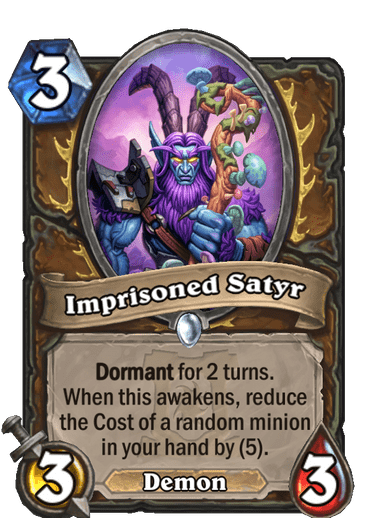 We think this card may only look good in theory. It will probably turn out to be a much worse Dreampetal Florist. Discounting a combo piece such as Malygos in the late game is going to be a very slow and painful affair. This card also wouldn’t fit Embiggen Druid because of its anti-synergy with Strength in Numbers, and the latter is a better card for the purpose of cheating out threats. 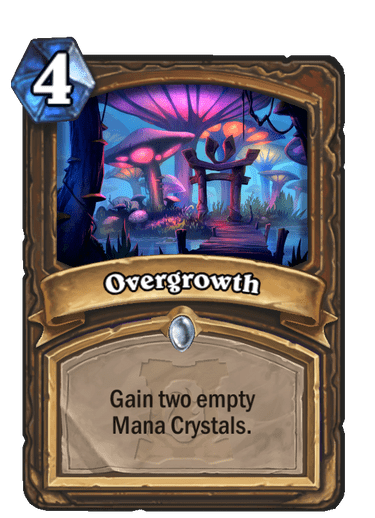 Overgrowth may not be as good as a 2-mana Wild Growth, but it’s still a very strong ramping tool that several Druid archetypes should be interested in, especially those that happen to run Breath of Dreams. We just can’t see this card not being played. It is historically proven that when Druid has powerful ramp, and has something worthwhile to ramp towards, it does well. This card is going to be auto-included in any non-Aggro, non-Quest Druid deck for the next two years.

The Book of Specters for spells. This card opens the possibility of Druid embracing a spell-heavy deck, as Fungal Fortunes should be a very powerful draw engine in this kind of build. We can see this working out as the class has received a few more tools that could enable a spell-centric win condition that’s not reliant on any minions to execute, but it’s going to be tricky. 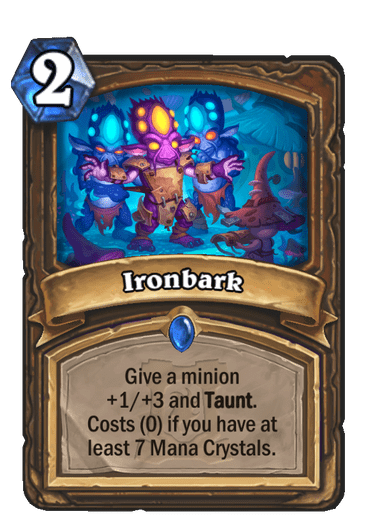 This card works similarly to Bogbeam, and it should be serviceable in ramping Druids, but we think it is slightly weaker. The reason is that Ironbark requires us to have a minion on the board that can take the buff. That can get a bit awkward in slower Druid decks that usually have a low density of minions to play, Embiggen Druid decks that are flooded with evasive minions, or Token Druid decks that have a lot of small minions that wouldn’t make the most out of this buff. 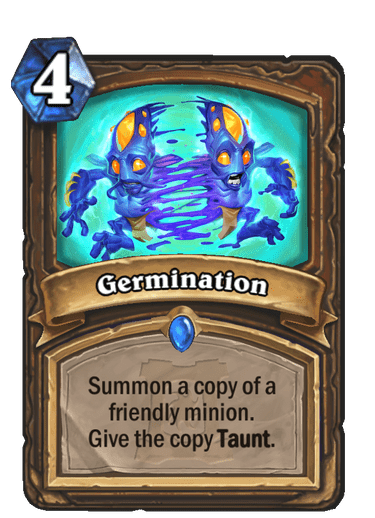 A 4-mana Faceless Manipulator with taunt, this is a pretty strong copy effect. We suspect its most common target will be Malygos, potentially bringing back the Aspect of Magic to the forefront of the class. However, as we’ve said earlier, we don’t like the current discount option to make this possible (Satyr) so we’re cool on the idea. 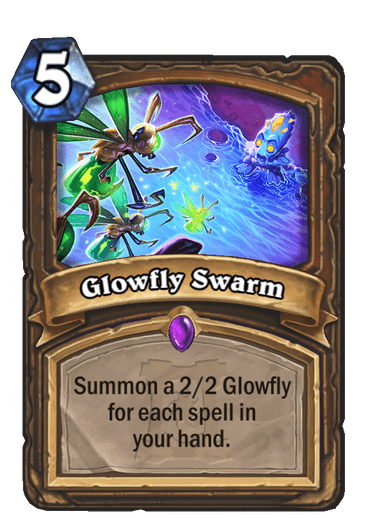 Another big incentive to play a “Spell Druid”, and one that encourages us to go for the Soul of the Forest/Savage Roar win condition. This is a similar card to Wispering Woods, but probably even better and more resilient on average. Can completely blow out aggressive decks on 5 and provides a very intimidating late game threat for slower decks alongside SotF/SR. 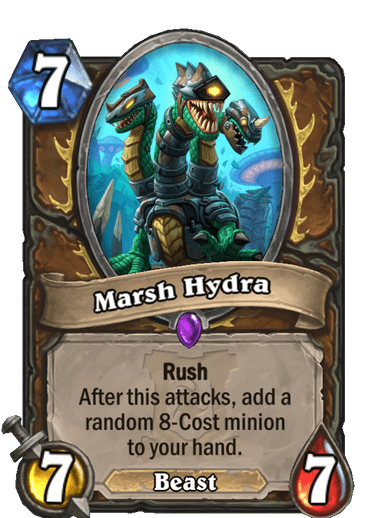 The only deck that we can see running this card is Embiggen Druid. If it decides to up its curve, it might pass on Hydra anyway. The value Hydra offers also seems a bit luxurious and unnecessary for the deck’s game plan. 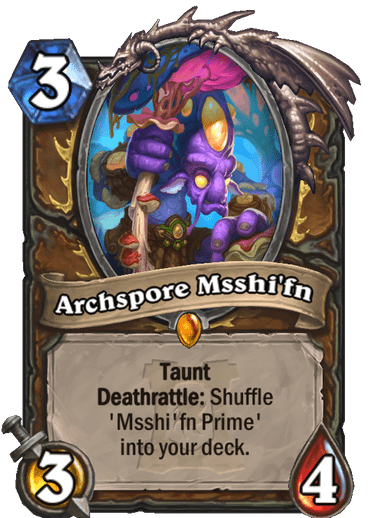 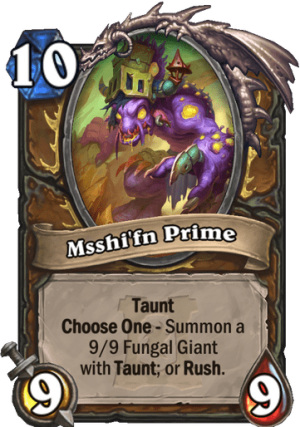 This minion has pretty good stats for its cost, but it doesn’t blow us away with what it’s capable of doing. The Quest Druid synergy isn’t all that great, while Embiggen Druid shouldn’t be enamored either. We struggle to find a good home for this card in a new archetype, even though it’s a serviceable minion. Other primes just scream at us where they’re supposed to go, and this one does not. 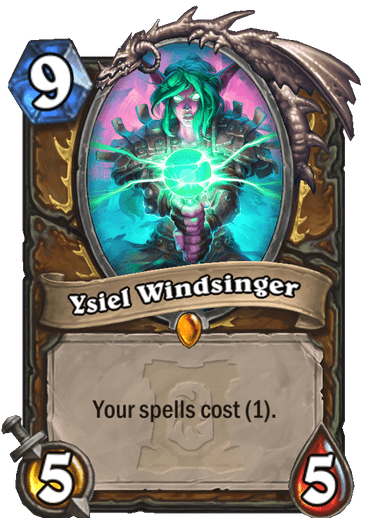 We spent a lot of time trying to figure out how to abuse a spell-Aviana in Standard format. After going over plenty of convoluted ideas, we just don’t see it. Any deck that would potentially be interested in this kind of effect, should prefer running Kael’thas instead. Running both and trying to force our way into making this card acceptable through optimistic Satyr discounts just results in builds that we struggle to see winning Hearthstone games consistently. We’re either missing out on something here, or this card just sucks.

Year of the Dragon Rank: 3rd

Going into rotation, Druid has excellent foundations. It possesses the strong core of an Embiggen Dragon deck to support a beatdown strategy, and the proven shell of Quest Druid to support a defensive strategy, even though it was certainly hit with the loss of Loti and Floop. Token Treant Druid is also an archetype that’s snooping around, waiting for some upgrades that could push it forward.

The problem is that Druid’s Ashes of Outland set looks on the weak side. We’re mostly concerned with Druid’s late game plan, which was given cards that we’re not very confident in. Most disappointing are the legendary minions it received. Msshi’fn is a card of a lower impact compared to other classes’ primes, and Ysiel is hard to build around and exploit. Kael’thas might be the one that does all the work instead.

Still, there are some good things for Druid in this set. Overgrowth may not just be slotted into Embiggen Druid but enable new combo Druid decks that aren’t built around Untapped Potential. We’re particularly curious about a spell-focused Druid deck, fueled by Fungal Fortunes and Glowfly Swarm, and taking in some of the shell from Treant Druid alongside the Savage Roar finisher.

Going into the new expansion, Druid looks okay. We don’t expect it to dominate, but we’ll have to see how Quest Druid adjusts to its big losses, how Embiggen Druid fares against some of the faster decks we expect to emerge and whether Overgrowth can carry a new deck to the forefront.