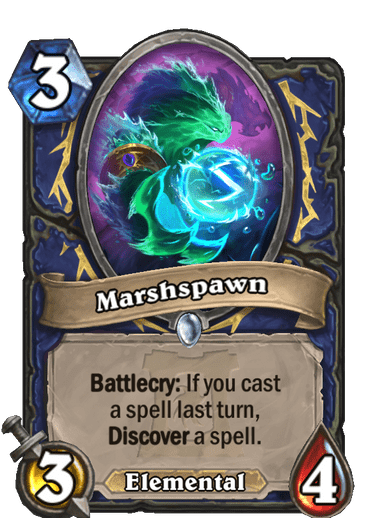 We know from history that cards that read “if you did X last turn, then Y” usually don’t work out very well. They can be difficult to set up optimally alongside the need to respond to events that occur in the game. The good news is that Marshspawn is a 3 mana 3/4. It’s not undersized for its cost and isn’t severely penalized for the effect, so we think it’s serviceable. 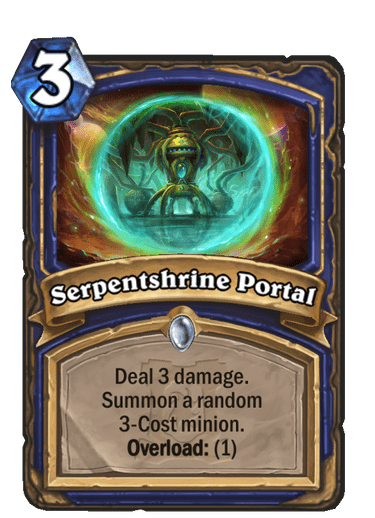 This a Flanking Strike that can go face and be played a turn earlier. That’s very powerful. Most Shaman decks, whether they are aggressive or defensive, will be interested in this card because it provides efficient board development tied into removal. Cards that affect both sides of the board in this manner are usually winners. 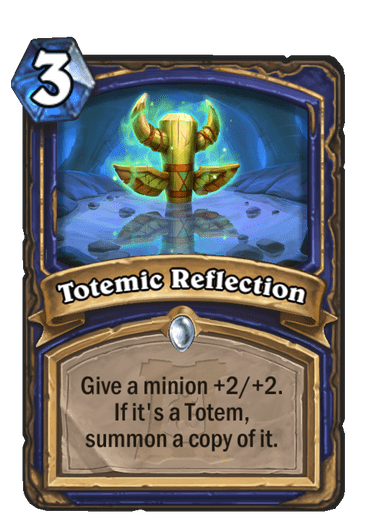 This is a strangely timed card. We think it has potential to be powerful, if strong totem synergies are available in the format. But they really aren’t: we just have Evil, Mana Tide and a nerfed Flametongue Totem to use this on. Of course, we could always use a basic totem as a target for this spell, but would we really want to do that? Highly questionable. Perhaps with more support in the future, this card will be given a chance to shine. 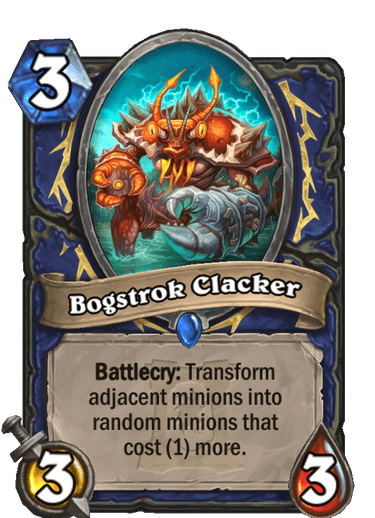 We know that Master of Evolution was not good enough, and it was a 4 mana 4/5 that evolved one minion. Clacker is a 3-drop, evolves two minions, but pays a stat penalty for it. This gives it a higher ceiling than the old 4-drop, but for the price of being even more situational (since it requires two targets on the board). We suspect that Quest Shaman might be interested in this card, but other decks should do better. 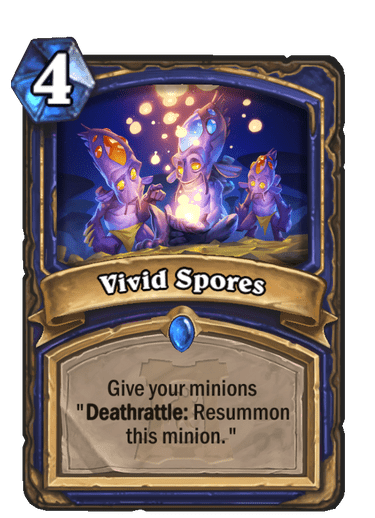 The AOE Ancestral Spirit, Vivid Spores is a combo-licious card that’s difficult to evaluate. It’s the kind of card many will write off, until it sneaks into the meta without being noticed. A good example of a similar card is Grave Rune, which ended up being a core piece for Resurrect Priest despite being frowned upon in spoiler season. Shaman doesn’t seem to have consistent means of abusing this card right now, but it’s hard to know for sure. 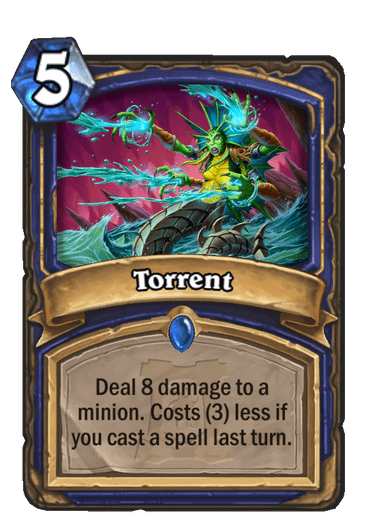 This is a solid, yet unspectacular removal spell. When not activated, it’s Flame Lance. When activated, it’s Crushing Hand without Overload. Flame Lance was good enough for a time in Reno Mage, so we can see the superior Torrent being played. Control Shaman decks (if they exist) that want every removal they can find should make use of this card, but faster decks will not touch this. 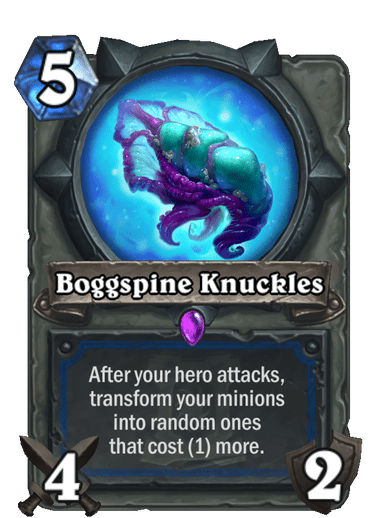 Two Evolves on a stick sounds scary, though this weapon is obviously slower than Evolve and won’t bring back the turn 4 Desert Hare nightmare of months ago. However, we do expect to see Desert Hare making a return in some form, as this weapon is still a very strong enabler for it. The most important thing to remember about Boggspine Knuckles is that it doesn’t need “ideal” set-up to be powerful. Even if you have a bunch of lackeys, hitting your opponent with a 4-attack weapon while buffing and developing your board is strong for 5 mana, especially when it can be done repeatedly. Knuckles can really snowball an advantage. 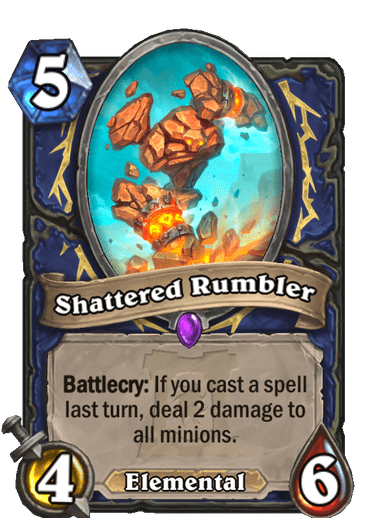 This card looks underwhelming compared to a similar card in Crazed Netherwing. The condition is easier to meet with Netherwing, and its AOE is also bigger. Marshspawn is cheap and doesn’t pay a stat penalty of its ability. We can’t say the same for Rumbler, which is a very painful minion to play when it isn’t activated. However, a Control Shaman deck might still run this in order to stack multiple AOE’s to wear opponents down, so it isn’t unplayable. 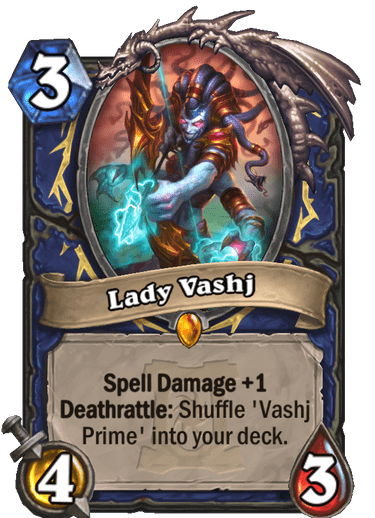 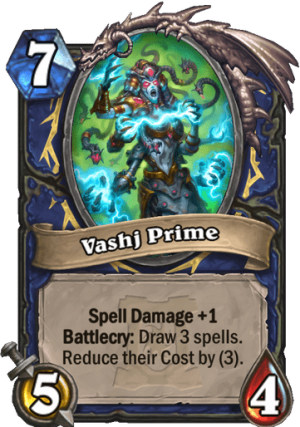 Another relatively underwhelming prime legendary compared to some of the other crazy ones we’ve seen. Vashj’s body is not great for 3 mana. Her effect in Prime form is nice, but it isn’t game changing either. Vashj’s undersized body could still result in a tempo loss when she’s played, unless we pull a 0-cost Lightning Storm or Serpentine Portal. Perhaps our standards are too high after witnessing Heistbaron Togwaggle run riot with his Wonderous Wand, but that’s what Shaman is competing against right now. 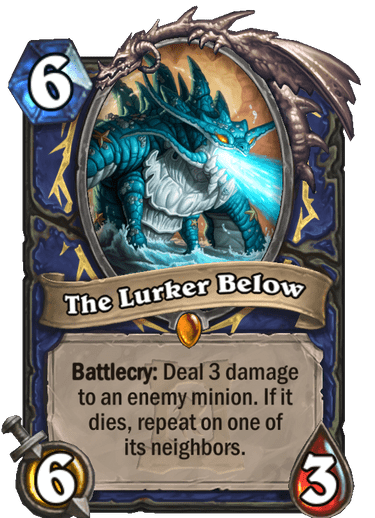 This card can be a strong board clear against board flooding decks, but it can be played around much more easily than Lord Godfrey, as an example. The Lurker Below is basically a Fire Elemental that lost two points of health for an upgrade on his battlecry. That doesn’t sound too great. Another Shaman legendary that isn’t really a game changer.

Year of the Dragon Rank: 7th

It’s getting quite the opposite of a big boost. More of a small whimper. Shaman has one of the weakest and most underwhelming sets in this expansion. It doesn’t have a single card that makes us pop in excitement over new possibilities. Clunky new spell synergy that eerily resembles the failed Elemental tribe. A prime legendary that will bait people to once again give Malygos Shaman a go until they realize it doesn’t work.

The most promising direction for Shaman might be a return of Desert Hare, but both Knuckles and Clacker don’t really compare to the raw power of Evolve and Shudderwock.

Still, there’s some things that Shaman can try and there’s a decent chance one of them will work out and keep Shaman in a competitive spot. Control Shaman could stack a ridiculous amount of AOE and single target removal to become a classic fatigue deck. Quest Shaman could overcome the loss of Shudderwock and Lifedrinker by playing an aggressive Evolve package that will look to blow opponents out early. The Galakrond package still exists, and even though it’s been nerfed to the ground, there’s still some good cards to build around. Even the forgotten Murloc Shaman could re-emerge thanks to the addition of Felfin Navigator.

It’s likely going to be a rough expansion for Thrall. We don’t see anything that gives us confidence and though its situation doesn’t seem to be as bad as Priest’s, it also lacks good card draw. Shaman’s goal in Ashes of Outland might just be avoiding the status of a dead class.