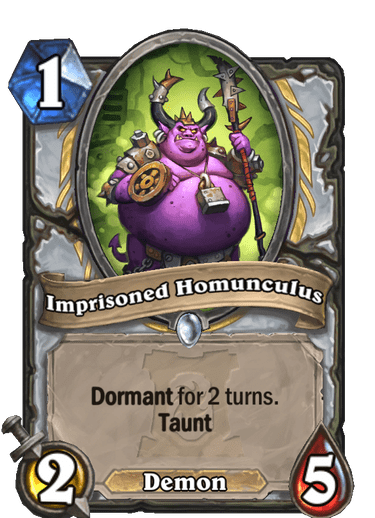 1-mana dormant minions are less punishing to draw later because of their cheap cost. They’re easier to fill the curve with, even though they don’t scale well, which is an issue for all dormant minions. Imprisoned Homunculus is quite strong on turn 1 and there are various buffs that Priest can cast on it once it awakens through the early to mid-game. It’s not amazing but it’s not unplayable. 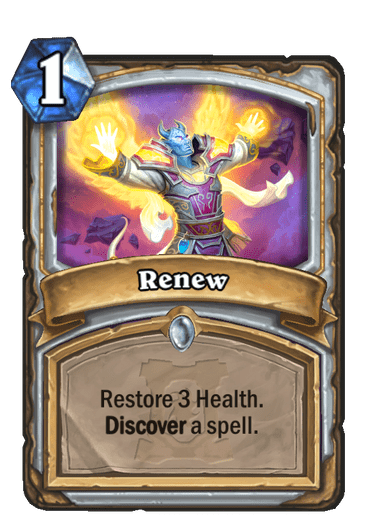 A playable spell that’s not particularly strong or interesting. We would be more interested in this card if Divine Spirit was still in the format, as it might have been a good choice for Combo Priest to run with Tol’vir, Blademaster and Wild Pyromancer. 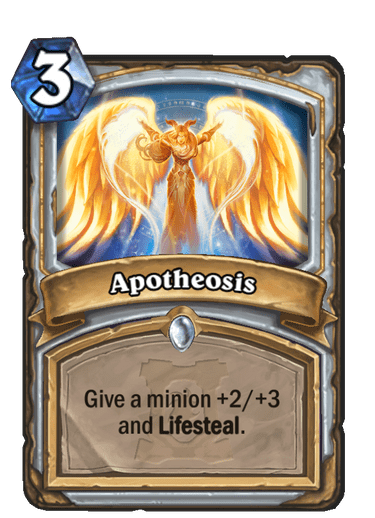 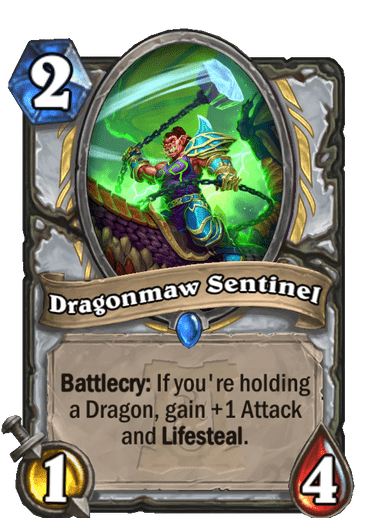 Another throwback, this time to Wyrmrest Agent. The Lifesteal keyword once again highlights a focus on anti-aggro utilities rather than sustaining pressure against slower decks. The real question is whether this anti-aggro shell can house any kind of late game potential in slower matchups. 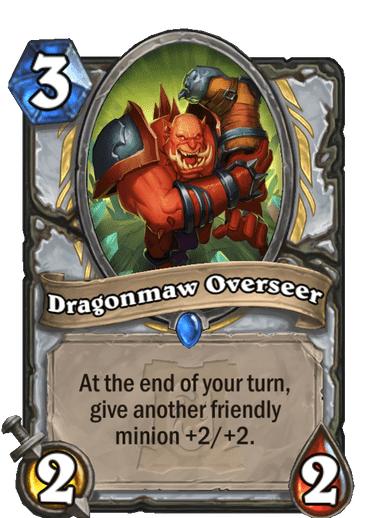 Very similar card to Shadow Ascendant. Costs 1-extra mana for a bigger buff, and therefore bigger snowballing potential. Priest is getting a lot of beefy early game minions, but can it build a viable zoo-esque aggressive deck in this expansion? Our eyebrows are slightly raised. 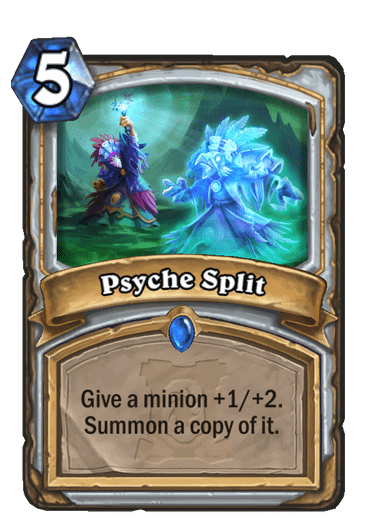 This expansion is giving us a lot of spells with copy effects. The Priest version costs 1 more mana, with an additional buff slapped on top it. The buff is equivalent to 2/4 in stats (pretty good for the cost), but only half of them carry an immediate impact, so this is very slow. We struggle to envision an archetype that would want this card. 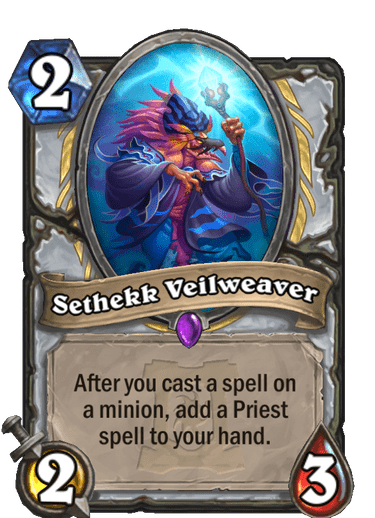 We think this card is flying a bit under the radar due to the general pessimism that surrounds the state of the Priest class right now. Veilweaver is basically a 2 mana Lyra the Sunshard, and that turned out to be a hell of a card at 5 mana. The difference is that Veilweaver doesn’t work with non-targeted spells, and we don’t have Radiant Elemental available. Still, this is probably the closest thing to a win condition that Priest has received in this set. 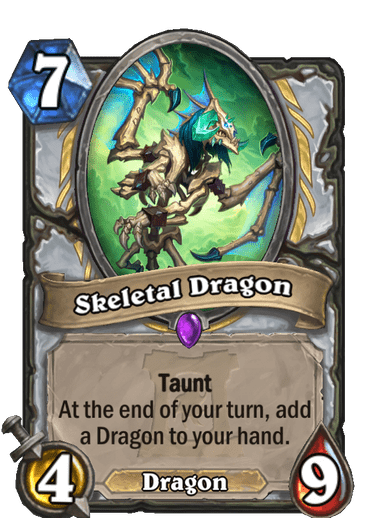 Reminder that Demon Hunter got an 8 mana 9/5 rush with a deathrattle that has better stats than this card. We don’t mind a slow, big body if it has an effect that increases our chances of winning games, but random generation is not going to get it done even if the cards generated are of a higher average quality. For a 7-mana card, we need to do better than this. 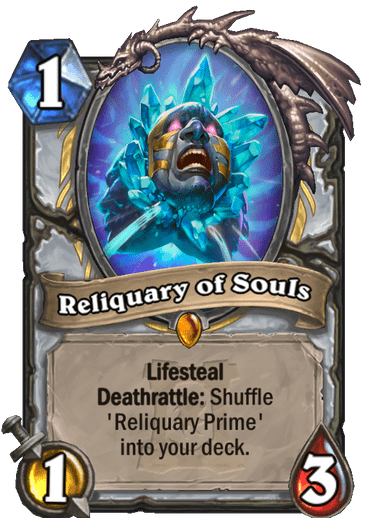 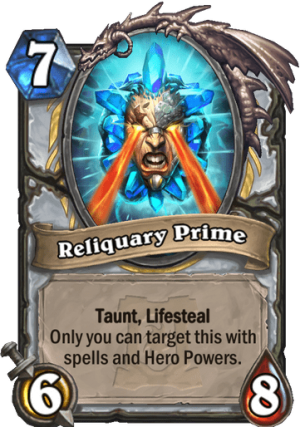 Priest needed a game winning Prime, and it unfortunately got one of the weaker ones when it comes to swinging the game in your favor. The 1-drop is okay (though lifesteal on a 1-drop is not going to get much value) but it’s the Prime that really irks us. It’s a good minion that Resurrect or other Priest decks will likely include in their builds, but it’s just a glorified Bog Creeper.

Have you seen the kind of effects that other classes are getting? Game swinging rush minions? Massive unkillable boards? Huge spell swings? We get a Bog Creeper with a couple of fancy keywords? Really? 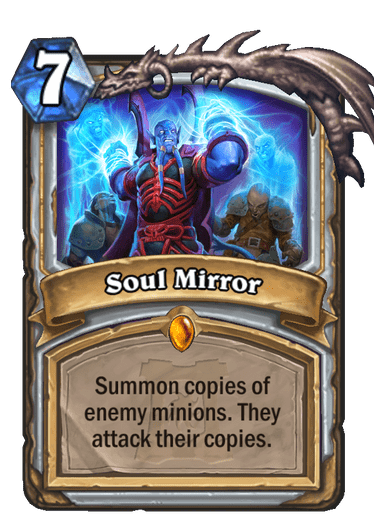 Soul Mirror is basically a Lightbomb with upside. We think the upside of generating board in case some the opponent’s minions don’t die from the AOE effect is well worth the additional 1 mana, which is likely why this is a legendary spell. There are also deathrattles and other static effects to consider that would make Soul Mirror very strong. This spell is going to be included in many Priest decks (if they exist…).

Year of the Dragon Rank: 8th

The Priest rework was hyped. Anduin was buzzing, looking forward to a stronger classic set that would allow him to compete better with the other classes at the beginning of a rotation. He had his trusted Combo Priest ace at his disposal, and a Resurrect Priest archetype that was solid, but losing two of its most important cards in Zilliax and Cloning Gallery.

Then came the changes and he was told Divine Spirit was gone, which killed his Combo Priest. He was concerned but retained his optimism. After all, there were some neat early game minions added to the basic and classic set. His removal spells were buffed too.

But then he was told Northshire Cleric and Power Word: Shield also had to go. He protested at first asking “Where’s my card draw?” but quickly calmed down. “It’s okay” he told himself “Thoughtsteal now costs only 2 mana”.

Then he was told Velen and Holy Smite were gone. “Priest is no longer allowed to kill opponents with damage” was the reason. “Fine, you got rid of Mind Blast anyway” he answered “It’s okay. I’ve got Natalie by my side now. I can feel the Power Infusion”.

Then came the expansion. A fair minion. A fair spell. Another solid card. More and more cards that weren’t unplayable, but weren’t game changing either.

“Wait a minute” he began to panic, seeing the kind of cards that were given to other classes “Where’s my win condition, Blizzard?”

“There you go!” they declared, and then Reliquary of Souls appeared before him.

“Isn’t it great?” they asked him cheerfully.

Anduin was silent for a few moments before shaking his head.

“It’s a Bog Creeper!” he spat in anger “How does this beat anything in the late game?”

“It’s not a Bog Creeper!” they protested “It’s more like a Winged Guardian with lifesteal”

Anduin buried his face in his hands for a few moments, before coming to terms with the situation.

“Okay, whatever. I’ll just play a midrange deck with these new minions and buffs. Where’s my card draw and finisher? You know, to replace the ones you took away from me”

“No card draw. That’s not allowed for Priest. No finisher either. We told you, Priest’s class identity is playing fair, not drawing cards and not killing opponents”

“Then what am I supposed to do now?! You scammed me!” he shouted in despair.

“You do what you always do. Just generate a random win condition and emote when it works”.