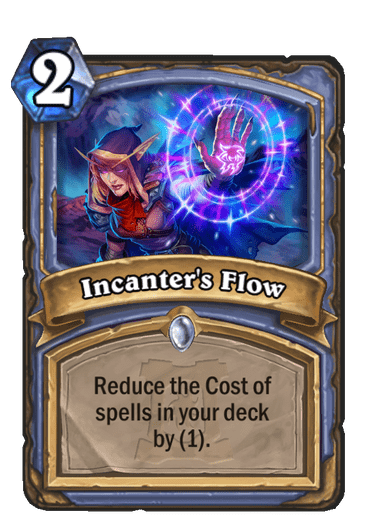 We think people are associating this spell too closely with the promoted all-spell Mage deck. There are other potential archetypes that could be interested in this card, especially of the combo kind. Permanent cost-reduction effects such as this shouldn’t be written off so easily. If not this expansion, we can see this card being strong eventually. 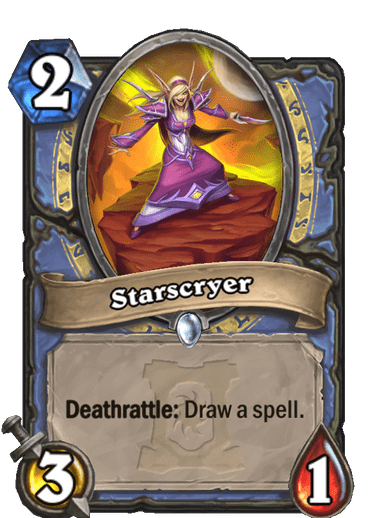 A Loot Hoarder with one extra attack. This is a solid, albeit boring card. The additional attack value makes it a potential choice for an aggressive deck, and slower Mage decks might also appreciate this early game minion. It will do a job. 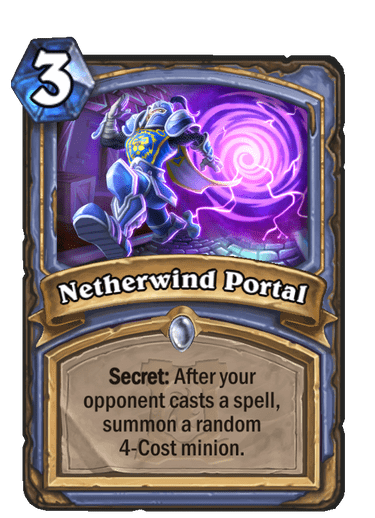 This is a good secret for an aggressive deck. Secrets that generate minions usually end up being valuable, and this is probably the first secret you’d put in a hypothetical standard format Secret Mage. The question is whether this deck is real, and this is where we’re not too enthusiastic. The current power level of Secret Mage is just so far away from being competitive and this card is unlikely to get it done. Not yet, anyway. 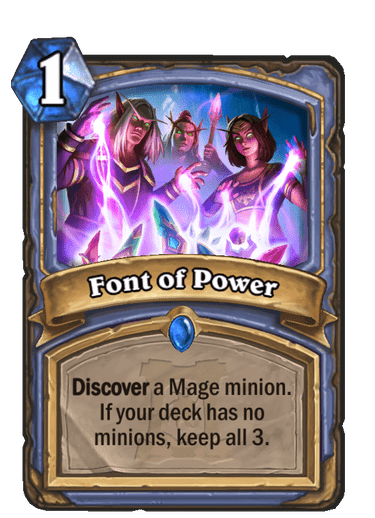 This is another card that people are dumpstering too hard. Yes, an all-spell Mage deck is probably not going to be good enough with this set, which means this card will likely be unplayable. But, that doesn’t mean this card is forever unplayable. This is a strong card in a weak, newly born archetype. We can see Team 5 pushing this deck in the following expansions, and if that happens, this card will see play. 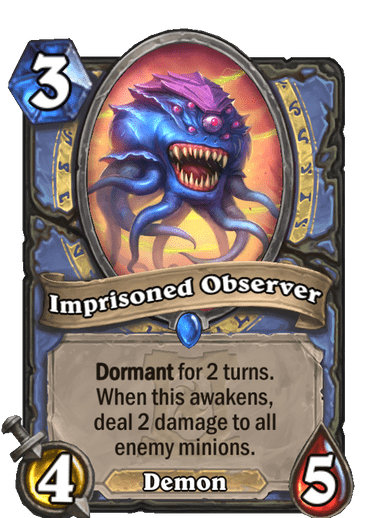 This is the real dumpster Mage card. It’s hard for us to think about a worse effect to attach to a dormant minion than AOE. We’re basically warning our opponent in advance that it’s coming, which means we’re never going get the value we want from the effect. Unplayable with no hopes of ever being better. 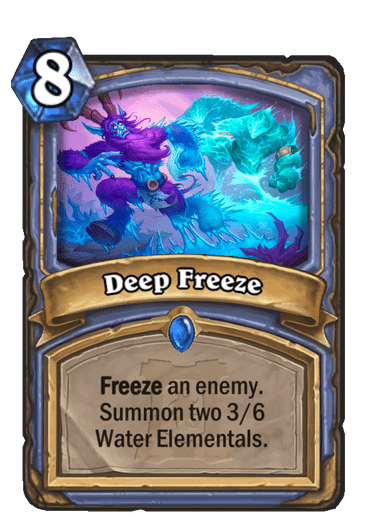 This is a fantastic spell. Two Water Elementals attached to a freeze for 8 mana is a very good deal. The amount of stalling this spell generates will often be unbearable, since Water Elementals are hard to kill and very annoying to trade with. “Spell Mage” plays this without question, but the deck that will benefit from it first in a competitive meta environment will probably be Highlander Mage. Dragoncaster is looking very good here. 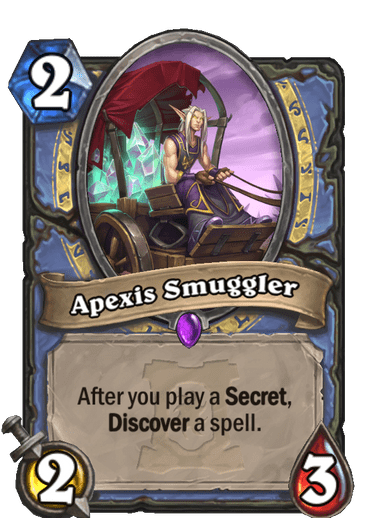 This card is a bit disappointing if you were hoping to play Secret Mage in this expansion. The archetype probably needed more than a mediocre value 2-drop that’s not even guaranteed to get that value. Unless it’s ignored, we have a 0-cost secret in hand or we’re on turn 5, it’s a River Crocolisk. That just doesn’t fill us with confidence. 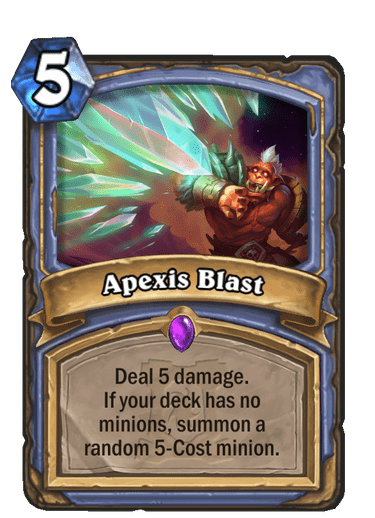 Again, this is a strong card in what looks like a weak archetype. It’s a Firelands Portal for 5 mana. Firelands Portal at 7 mana was a very good card. Unless Team 5 pre-emptively gives up on this archetype after supporting it for one expansion (unlikely to happen because this isn’t Paladin), this card will eventually see play. 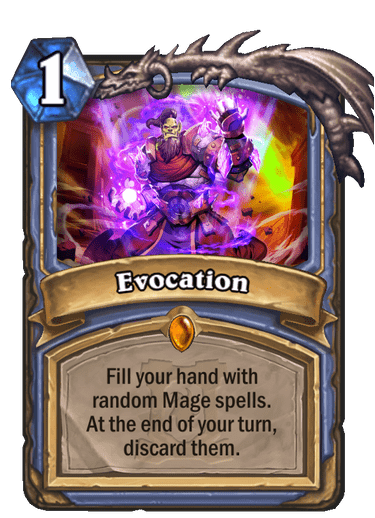 Evocation is a spell that can provide you with narrow escapes in desperate situations, find you missing points of damage for lethal, or provide you with some value to last longer in the late game. You probably don’t want to play Evocation too early, and there is a hand size limitation to consider in slower decks, but this card is just so flexible that it should be worth it. It’s basically a stronger Soularium with no drawback. Nuts. 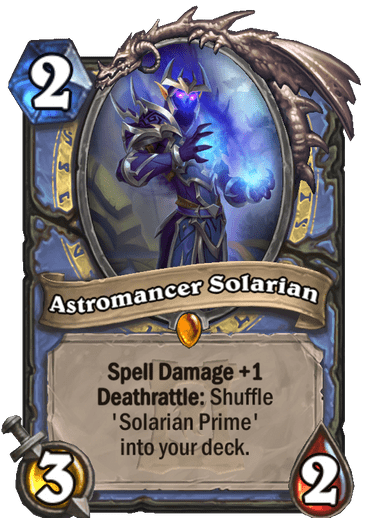 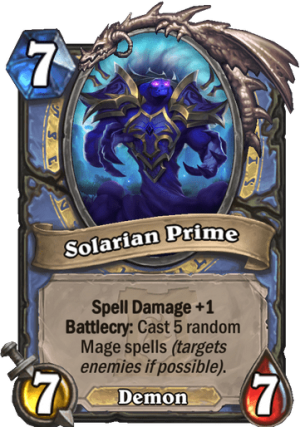 Solarian is a solid 2-drop which shuffles in a 7-drop that is very likely to wreak havoc on your opponents and their boards. Much like Evocation, this card transcends archetypes and should be an excellent choice both for aggressive decks that look to make a game-ending push or defensive decks that look to cheese removal in a way that’s guaranteed to piss people off. We thought pissing people off was part of Priest’s class identity, but we guess that’s been taken away from the class too.

Year of the Dragon Rank: 5th

Mage’s starting point from the Year of the Dragon is middle-of-the-road. It got some strong build around cards available, but weak shells to support them. Highlander Mage is the strongest archetype available heading into Ashes of Outland, but it loses the most unfair late game card it had in Luna’s Pocket Galaxy. There are no guarantees when it comes to Mage’s ability to compete in the new meta.

To make matters worse, its set initially looks like a disaster. Two cards are sunk into a Spell Mage archetype that will shock everyone if it ends up seeing competitive play anytime soon (though, as we’ve said earlier, we genuinely like the cards). Secret Mage, an archetype that currently looks nowhere near playable, is given two more cards to add to the pile of cards it has available that aren’t game changing. Cyclone Mage and Highlander Mage have not received these game changing cards either.

In proper Mage fashion and true to its identity in the last year, the class seems to be rapidly losing its battle to other classes until it pulls out two clown fiesta RNG legendaries to bail it out. Two monumental cards in Astromancer Solarian and Evocation have saved what easily looked like the worst set of the expansion.

Both will be played by every Mage deck that can afford them. Evocation might be a little questionable for a slow archetype like Highlander Mage which often has plenty of cards in hand, but this is likely the only exception. Can these additions cover up the crumbling foundations of Mage from Year of the Dragon? Only time will tell. Put on your clown costumes and let’s get this party started.